Live-work spaces: Inside the super-functional condo of a pair of professional musicians

Live-work spaces: Inside the super-functional condo of a pair of professional musicians 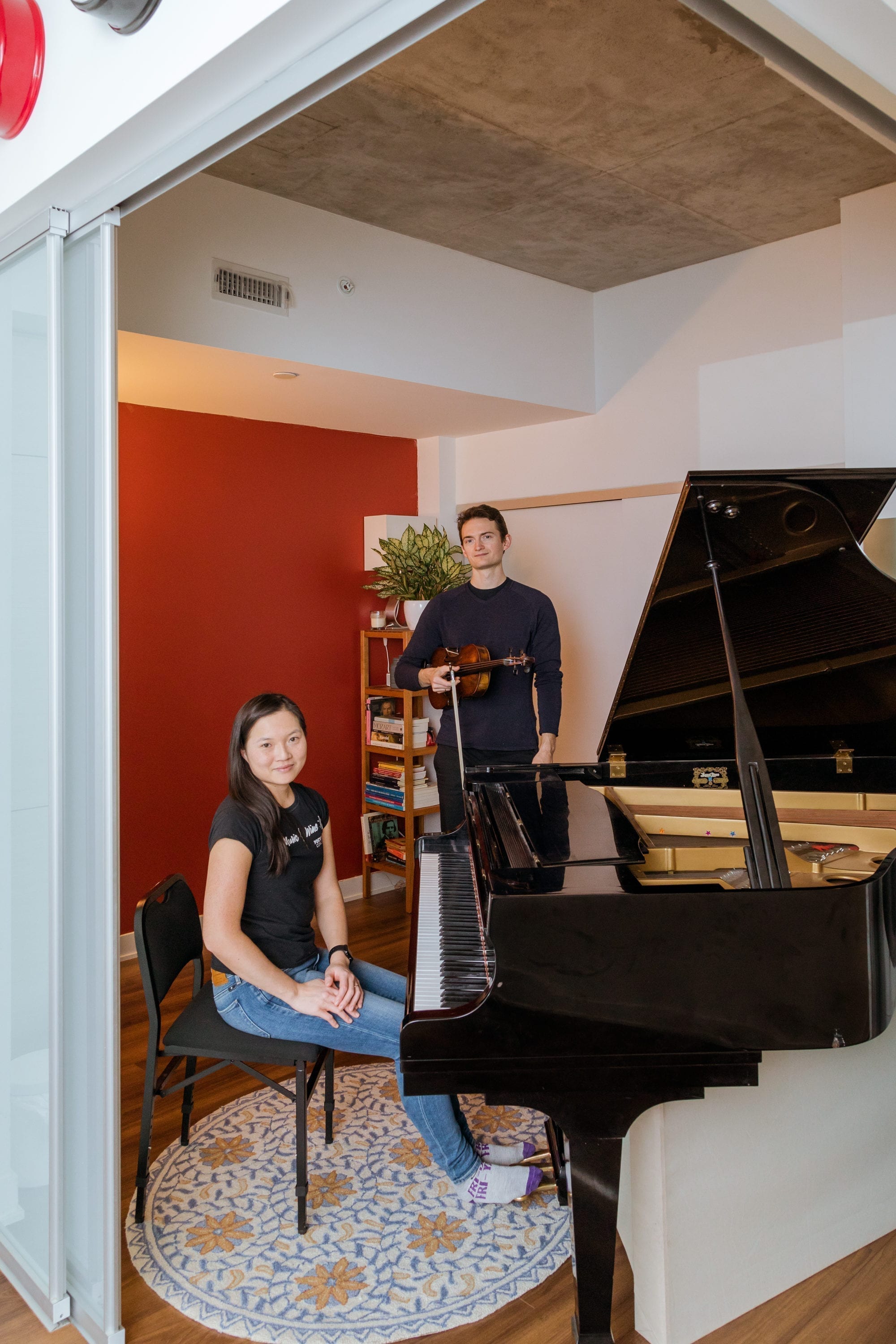 Rory McLeod and Emily Rho, both 35

Rory and Emily’s two-bedroom live-work space would ordinarily have been beyond the means of a married pair of working musicians. They bought the Simcoe Street condo with the help of Artscape, a local nonprofit that supports Toronto’s artistic community. “It’s safe to say we never considered owning property in Toronto until this opportunity came up,” Rory says. Artscape subsidizes about 60 per cent of the cost of their mortgage.

There is a catch: when Rory and Emily decide to sell, Artscape will broker the sale to another artist on similar terms, meaning the couple will only be able to pocket a portion of the proceeds. They applied for the program four years ago and picked their unit off a set of plans. “We studied those religiously,” Emily says. “This was our first choice. We were just lucky.” They took possession in 2015.

Before settling here, they lived in a rental unit at Jane and Dundas. They liked the area, but not the commute. Now, Rory—a violist who regularly plays as an extra in the orchestras of the Canadian Opera Company and The National Ballet of Canada—can get to the Four Seasons Centre in under five minutes. Emily’s commute to the Royal Conservatory of Music, where she coaches chamber musicians, is less than 15 minutes. Plus, they’re closer to their students, many of whom study at U of T.

They use every inch of the space. When they moved in, they turned the master bedroom into a piano room for Emily. In the second bedroom, they installed a Murphy bed so Rory could separately practice playing his viola during the day. “We can hear each other, but it’s not so disruptive that you can’t hear yourself playing,” Emily says. The rest of the condo is set up like a typical home, with a kitchen, living and dining area.

Rory and Emily run a company called Pocket Concerts, which holds intimate musical performances in small spaces around the city. Occasionally, they transform their own home into a mini-concert hall. They turn the piano around to provide a better view from the living room and arrange the chairs and couch in a semicircle.

Here’s their kitchen and eating area: 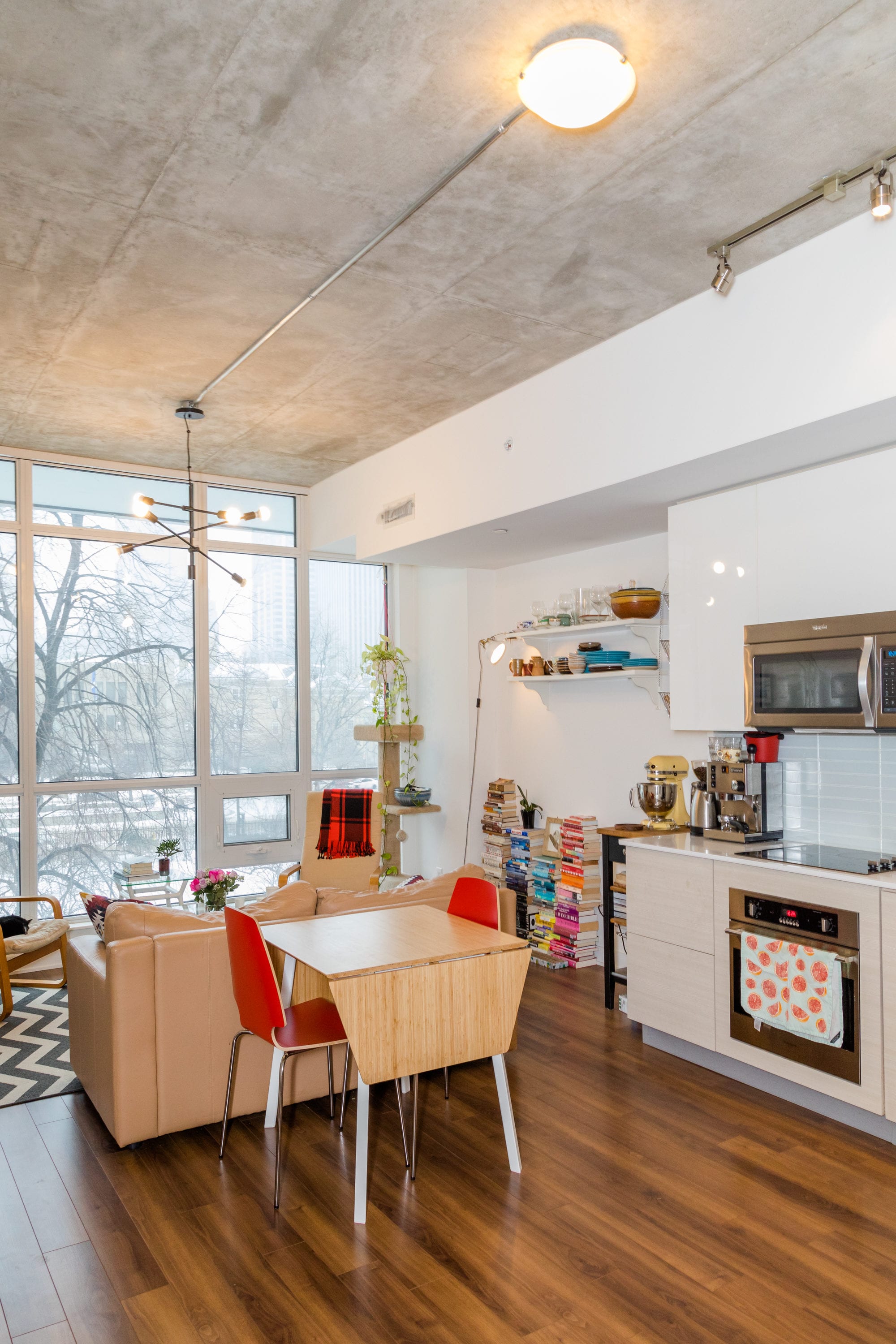 They have some wall-mounted plants and a cat, Mortimer. During concerts, they turn the couch and chairs around to face the master bedroom: 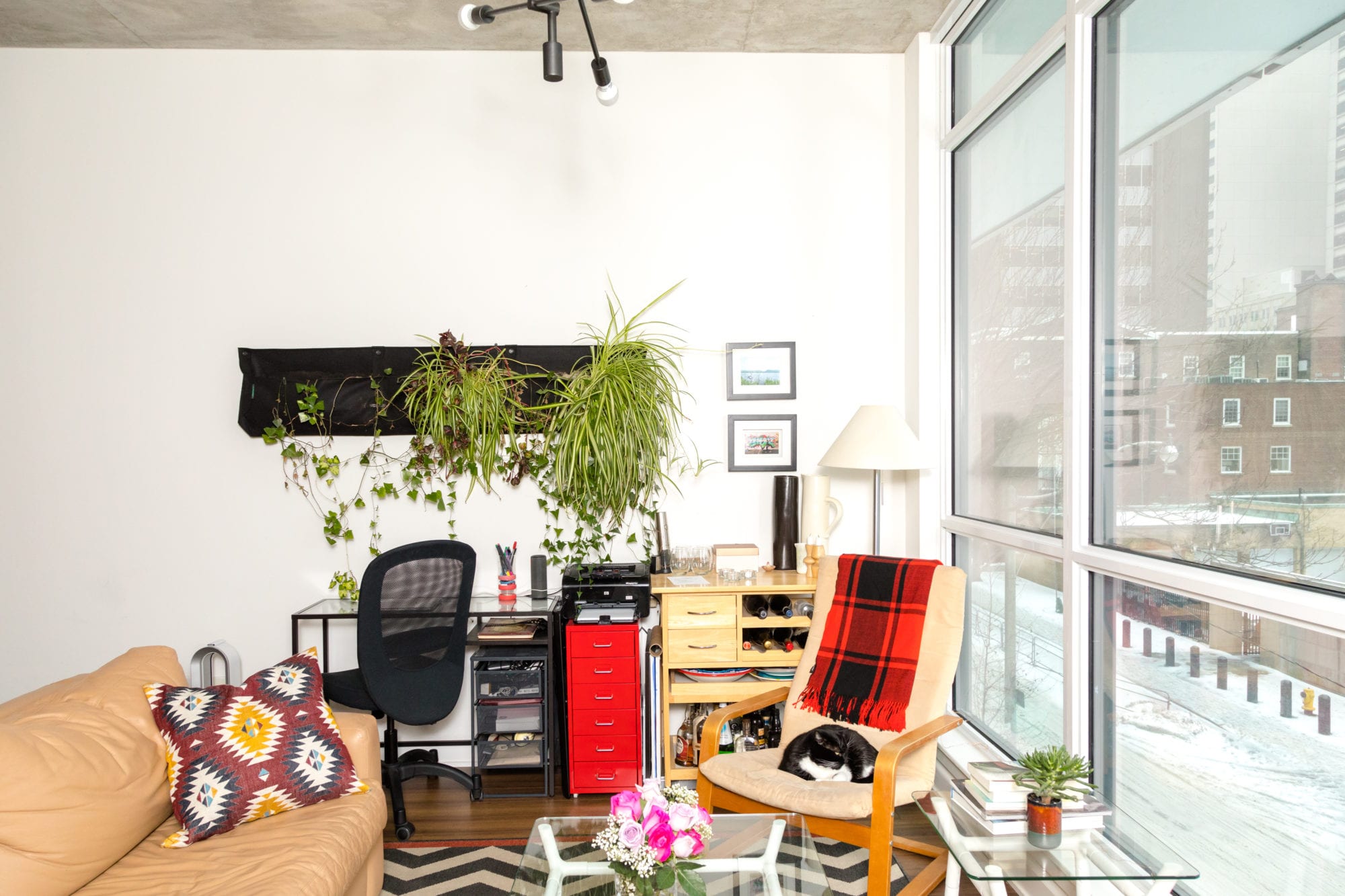 Speaking of which, here it is, with a baby grand piano. The instrument belongs to a pianist friend, who loaned it to Emily: 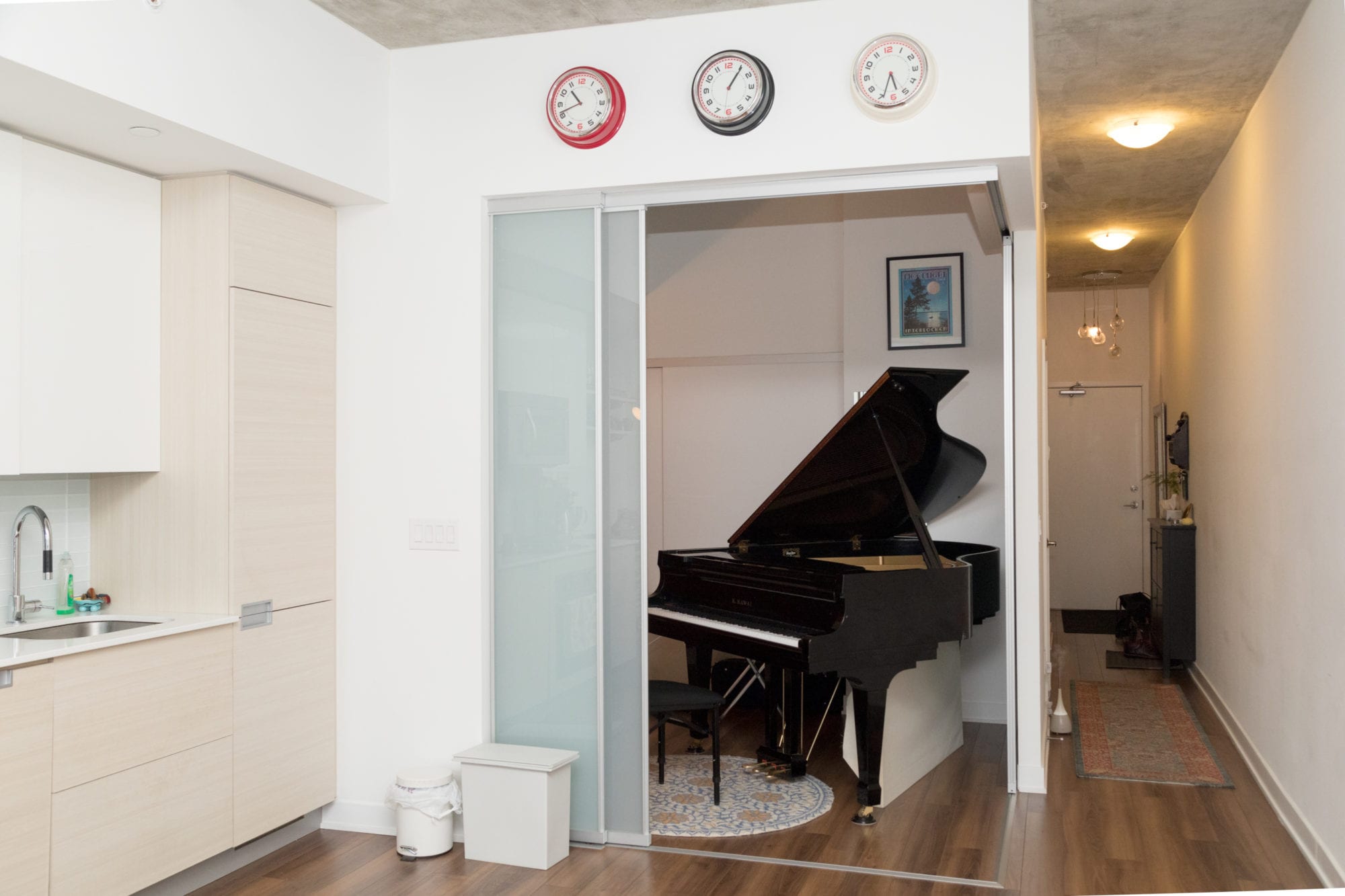 This is the second bedroom, where Rory plays his viola during the day. The Murphy bed folds up: 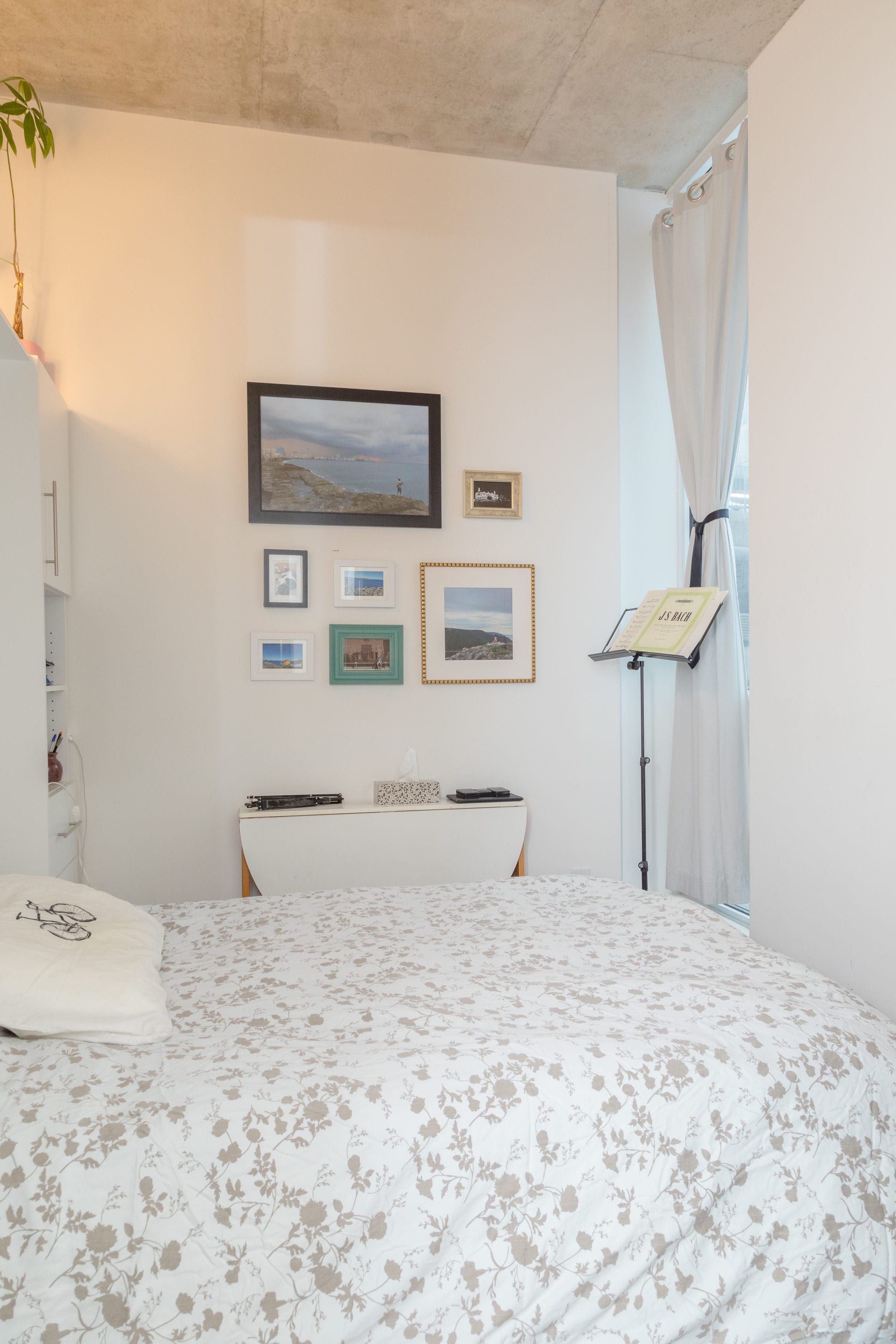 They run Pocket Concerts through Airbnb Experiences, so they end up hosting a lot of tourists. Here’s their guestbook: 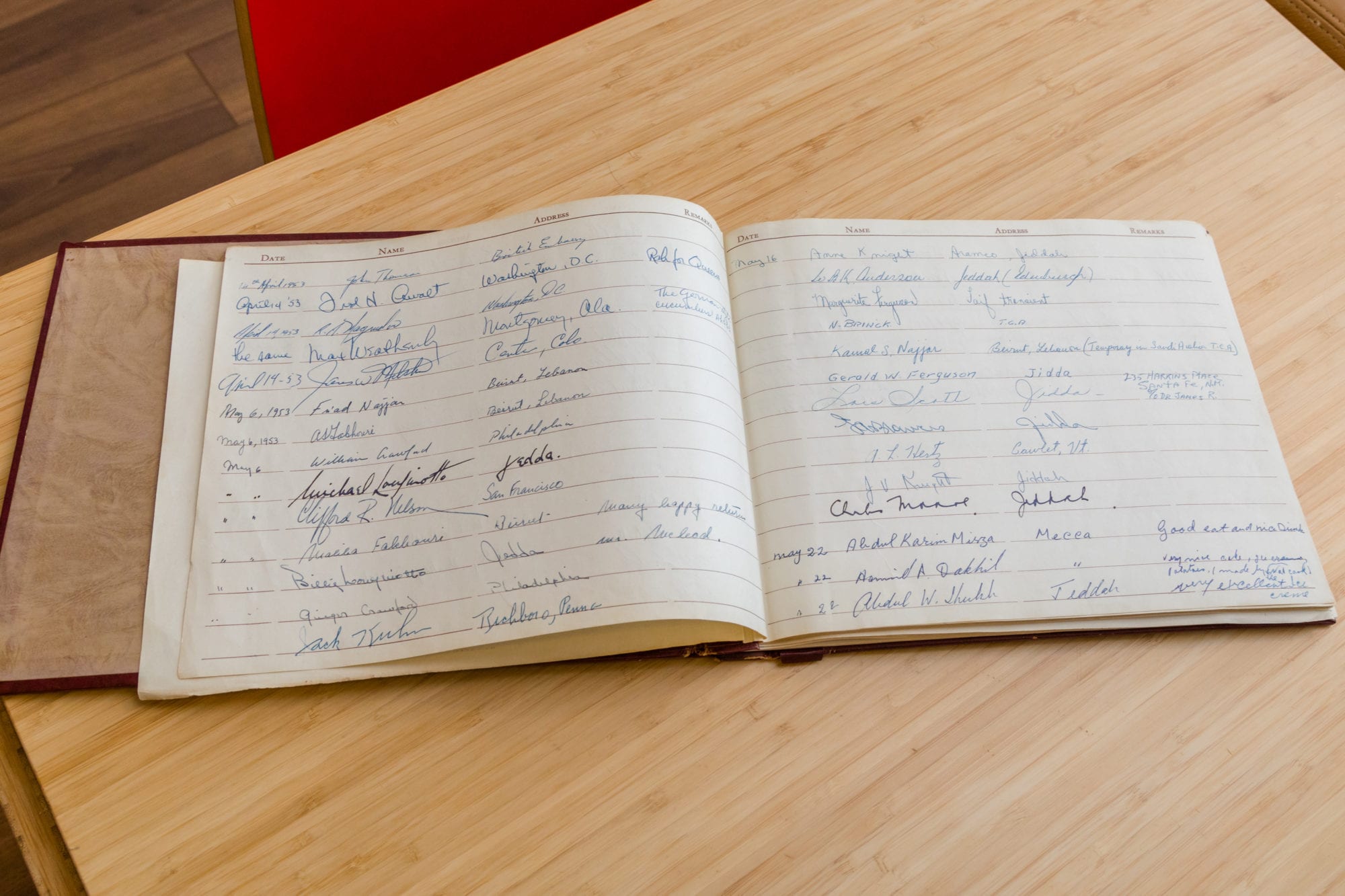