For $860,000, they got three bedrooms and three and a half baths, plus—almost unheard of in laneway suites—a basement 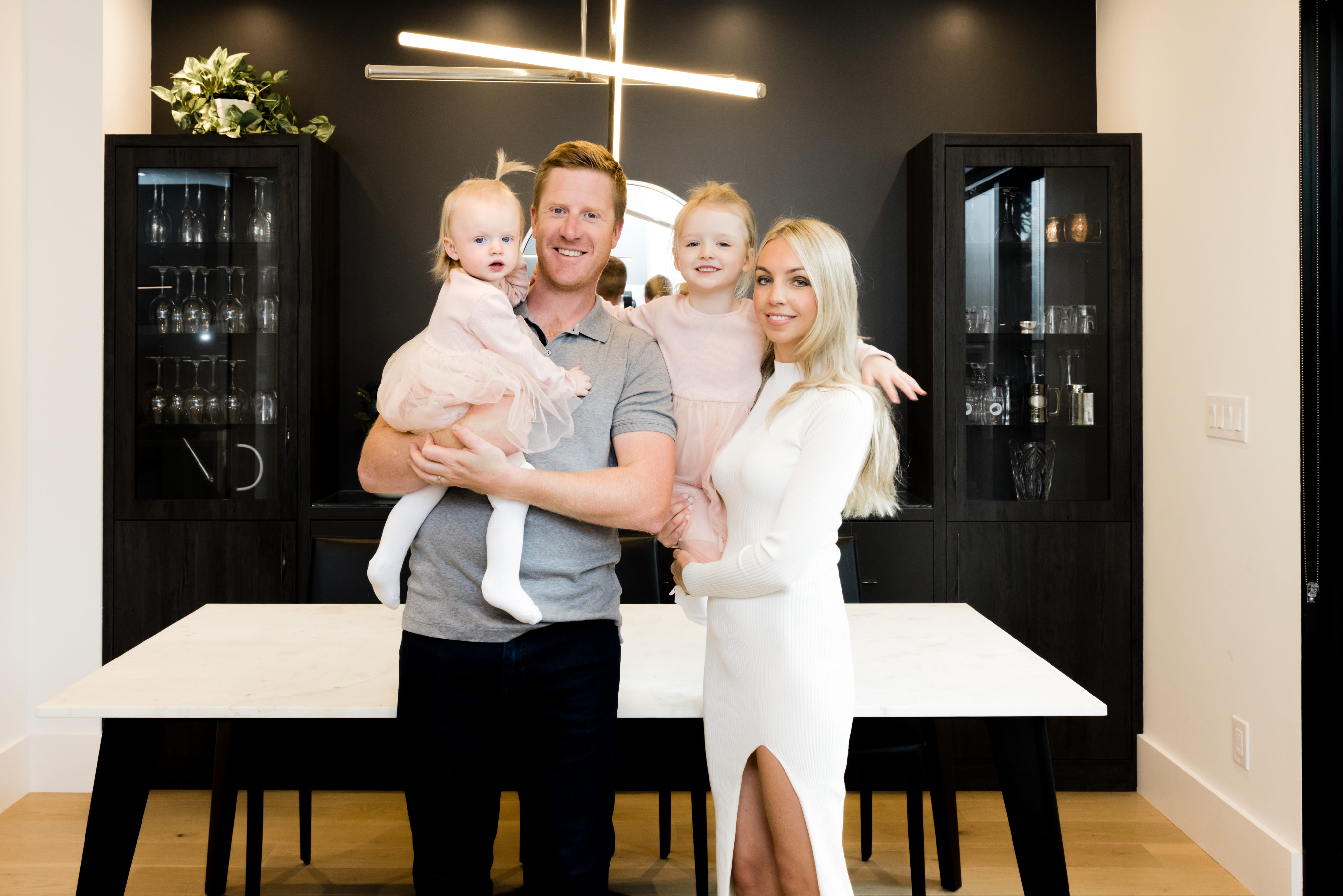 Who: Jordan Rasberry, 37, a real estate agent; Heather Rasberry, 37, director of operations for a tech company; with their daughters, Blake and Briar.

In 2015, Jordan and Heather purchased a townhouse in Brockton Village for $927,000. It was split into two units: a 1,100-square-foot three-bed, one-bath on the upper floor, which they occupied, and a 1,600-square-foot two-bed-plus-den, two-bath on the main floor and basement, which they rented out. In 2018, their eldest daughter, Briar, was born, and the family started feeling cramped.

By late 2019, Jordan was hearing plenty about the city green-lighting the construction of laneway suites. He and Heather realized their property would be a great candidate. It was large enough to accommodate a second building, plus the would-be unit was close to a fire hydrant. Jordan had also been helping a client lease out their own newly built laneway suite, which spanned 2,000 square feet across three floors. It was one of the first in Toronto to have a basement, and he and Heather were impressed at how spacious it was. They figured they could build a similar home with a basement, to fit their growing family, and then rent out both units of their original house.

In January of 2020, the Rasberrys hired architectural firm RePlacement Design to help conceive a three-bedroom, three-and-a-half-bath laneway suite. The main floor would have an open-concept kitchen, dining room and family room with a powder room, and the upper level would have three bedrooms, two full bathrooms and a laundry room. They budgeted about $800,000 for the build, furniture included. The plan was to try living in the space for five years before upgrading again.

They submitted plans to the city in April 2020. After some back and forth (the main entrance, for instance, had to shift positions according to the fire code), their plans were approved for a November start date on a seven-to-nine-month timeline. The old tenants had already purchased a new home and moved out, and any prospective tenants would be informed of the construction and whatever inconveniences it might entail. And then Jordan and Heather got some even bigger news: she was pregnant with their second child, due in July 2021, right around the time their new home would be complete.

The crew’s biggest problem came when digging out the basement. The property’s water table was higher than anticipated, resulting in muddy floors, a month of delays, an extra $30,000 and a lot of stress. The rising cost of lumber also added $10,000 to the budget. But, by the time the suite was framed, the family was surprised at how roomy it was. They realized they could be comfortable living there for far longer than five years. So they invested in higher-quality materials, including for the millwork and flooring. That added another $20,000, bumping their project total to $860,000.

By July 2021, the suite was complete—on schedule if not exactly on budget—and the Rasberrys moved into their new home with newborn Blake in tow.

The front of the suite, which faces the laneway, opens to a compact mudroom. 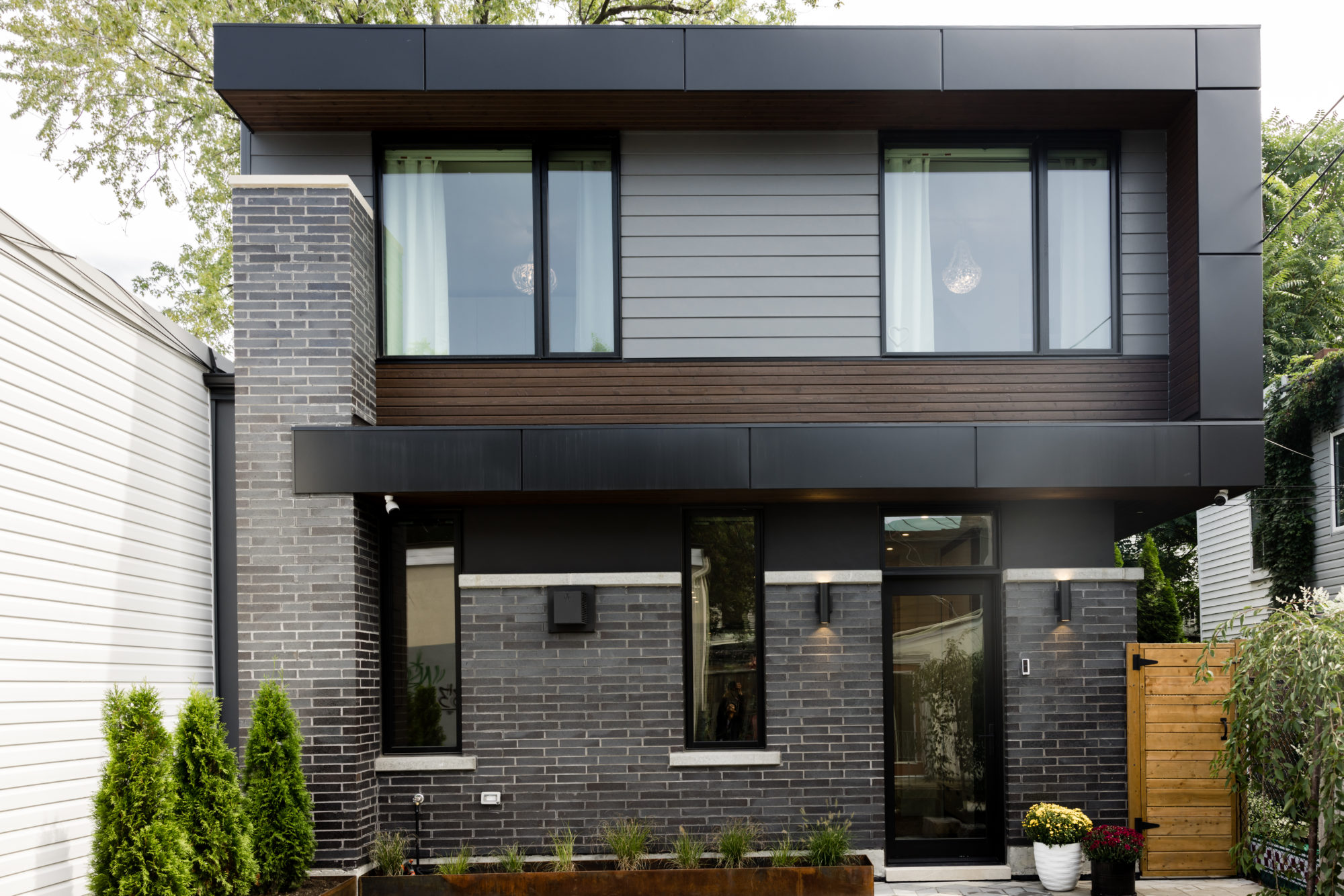 Overlooking the front patio is the family room, where the Rasberrys spend most of their time—getting ready for school, watching movies after dinner and hosting happy hours. The gas fireplace is wrapped in porcelain tiling. And there’s that mudroom on the right, with a divider that doubles as a plant and tchotchke shelf. 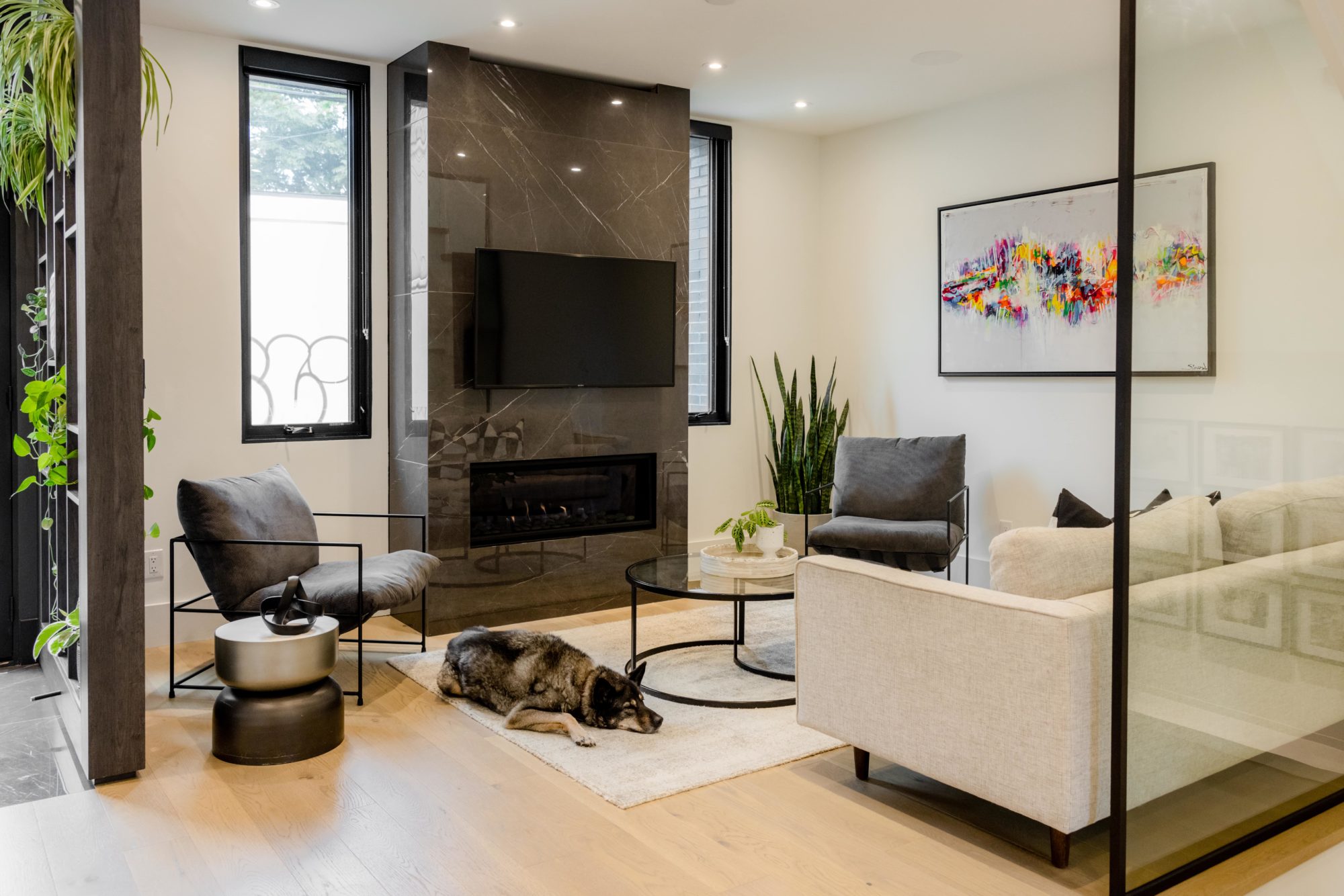 A powder room just past the mudroom breaks the sight lines from the front door, giving the family some privacy from passers-by. 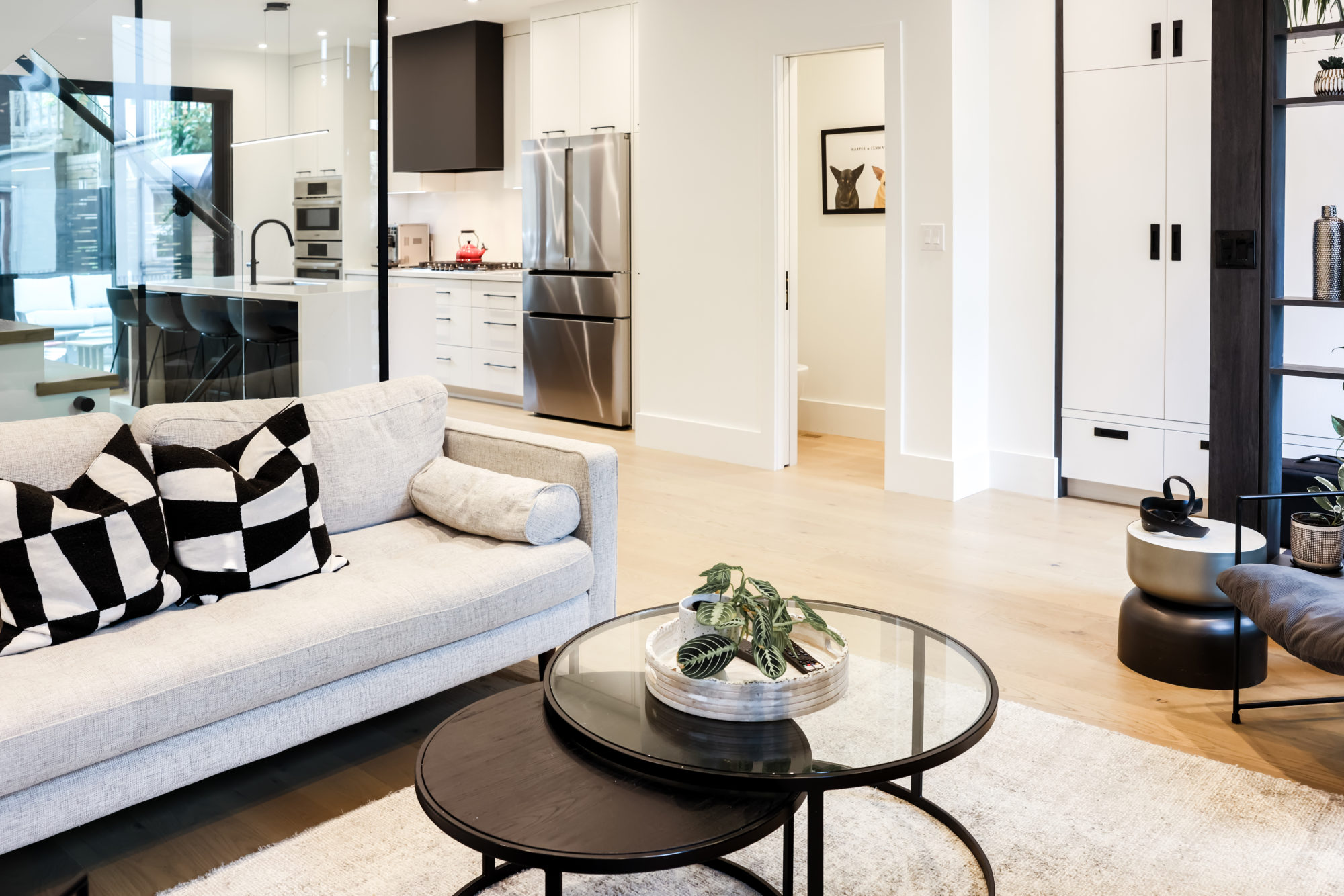 Though they have a proper dining table, the family eats most of their meals around the kitchen island. “It’s easier to serve the kids that way,” Heather says. The kitchen is outfitted with a five-burner gas stove and an in-wall dual microwave oven. 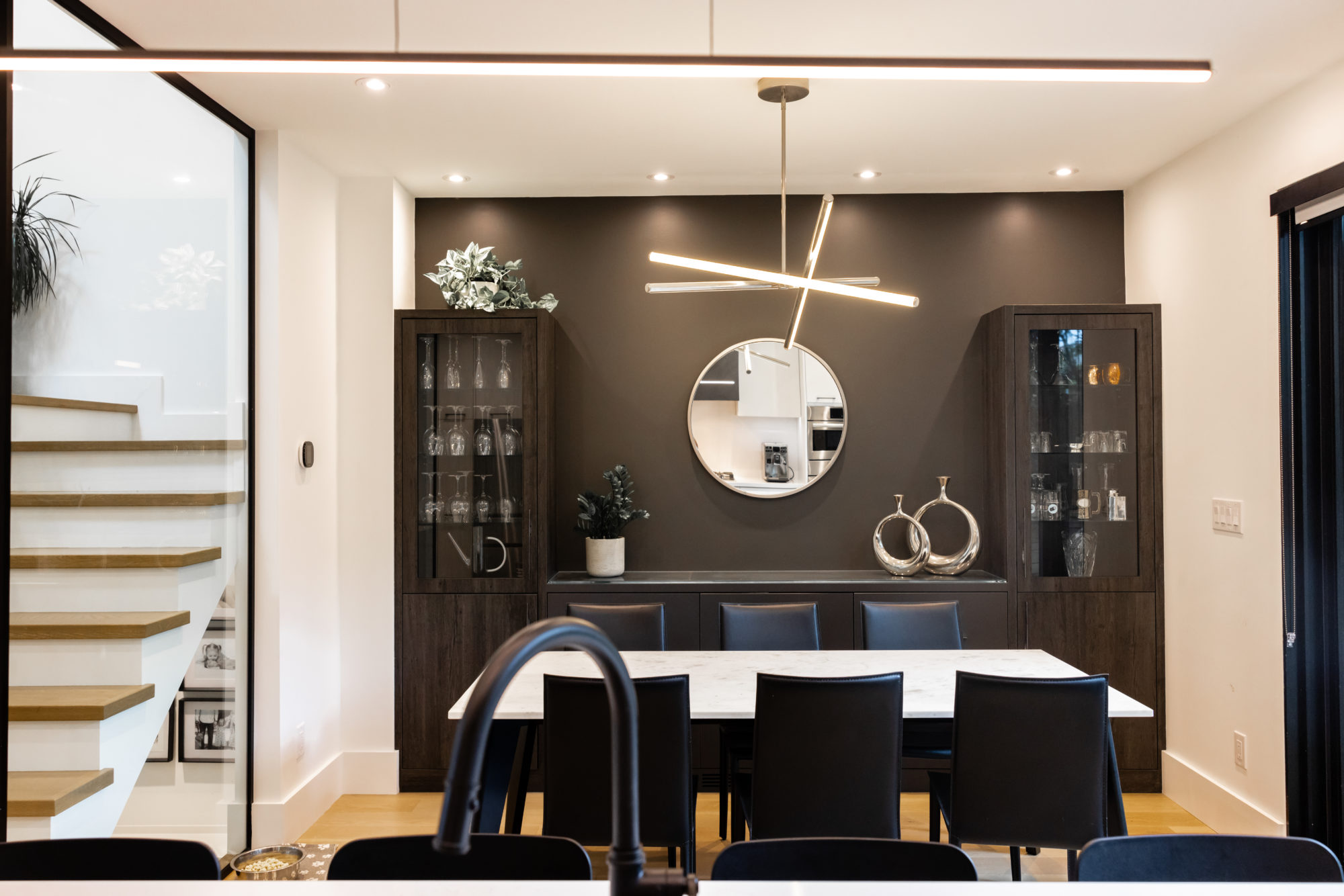 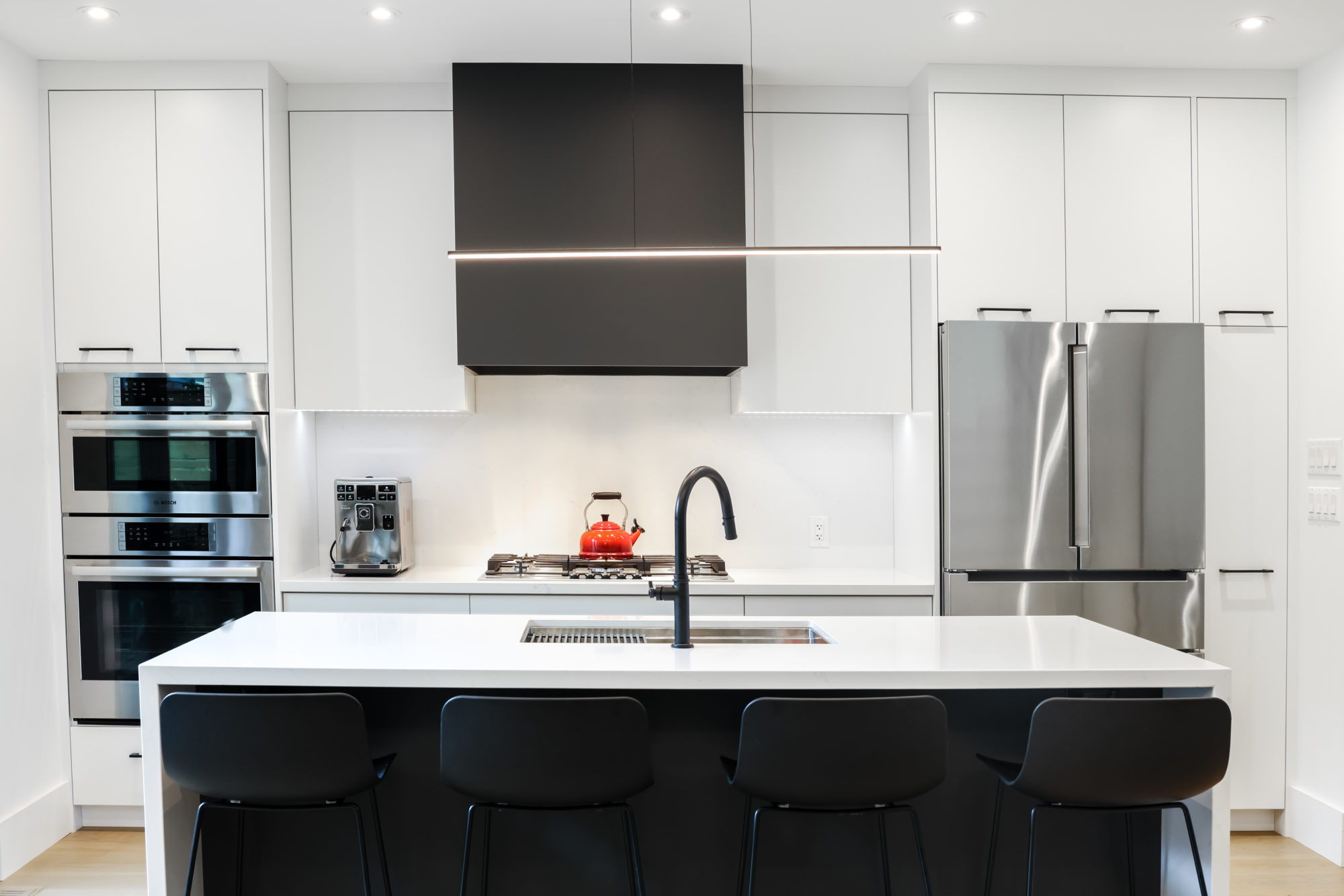 Sliding doors in the kitchen exit to the backyard, where the family has a gas grill plus a Big Green Egg barbecue, patio seating and a firepit. Metal screens provide additional privacy. 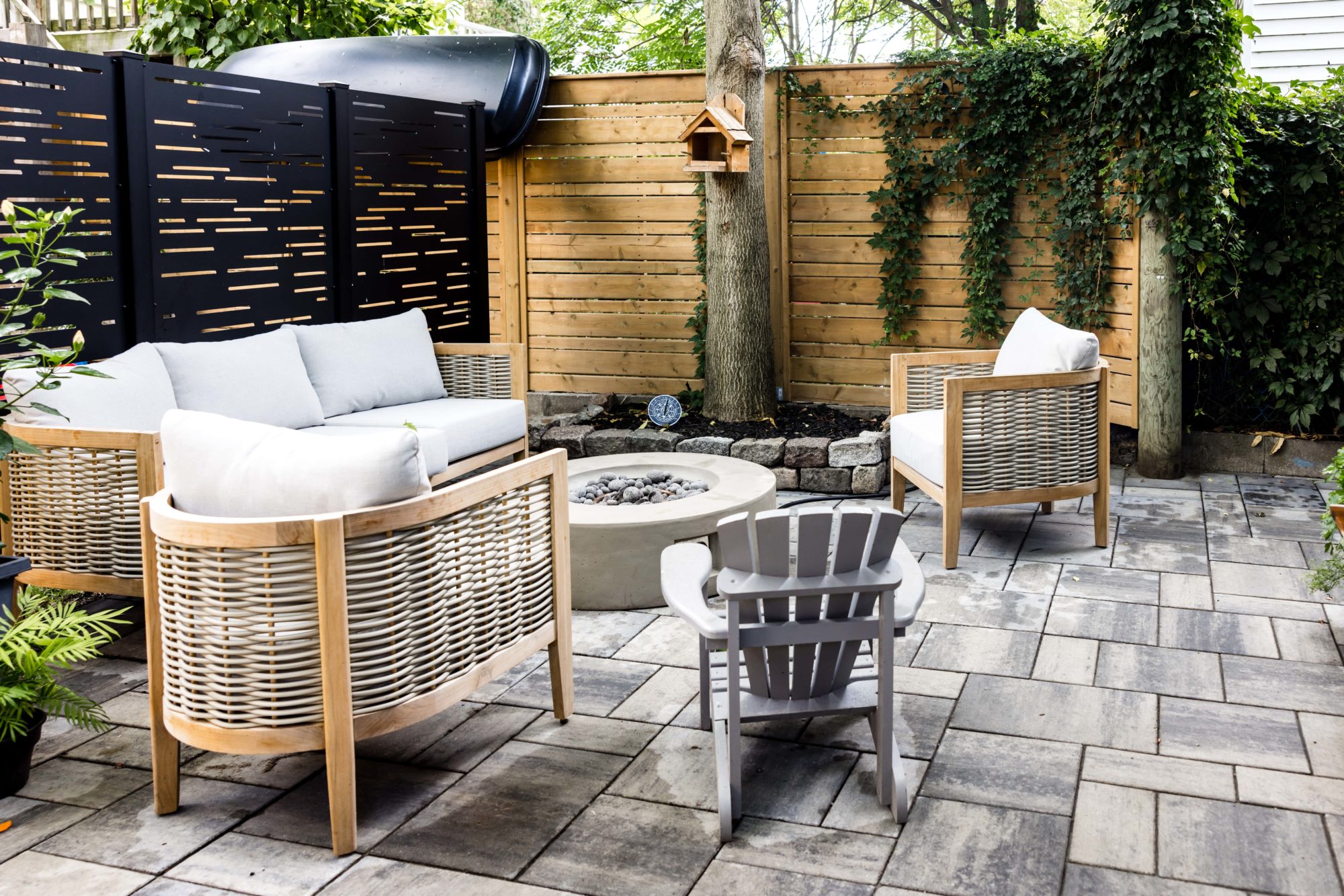 The main bedroom is on the upper floor, overlooking the backyard. 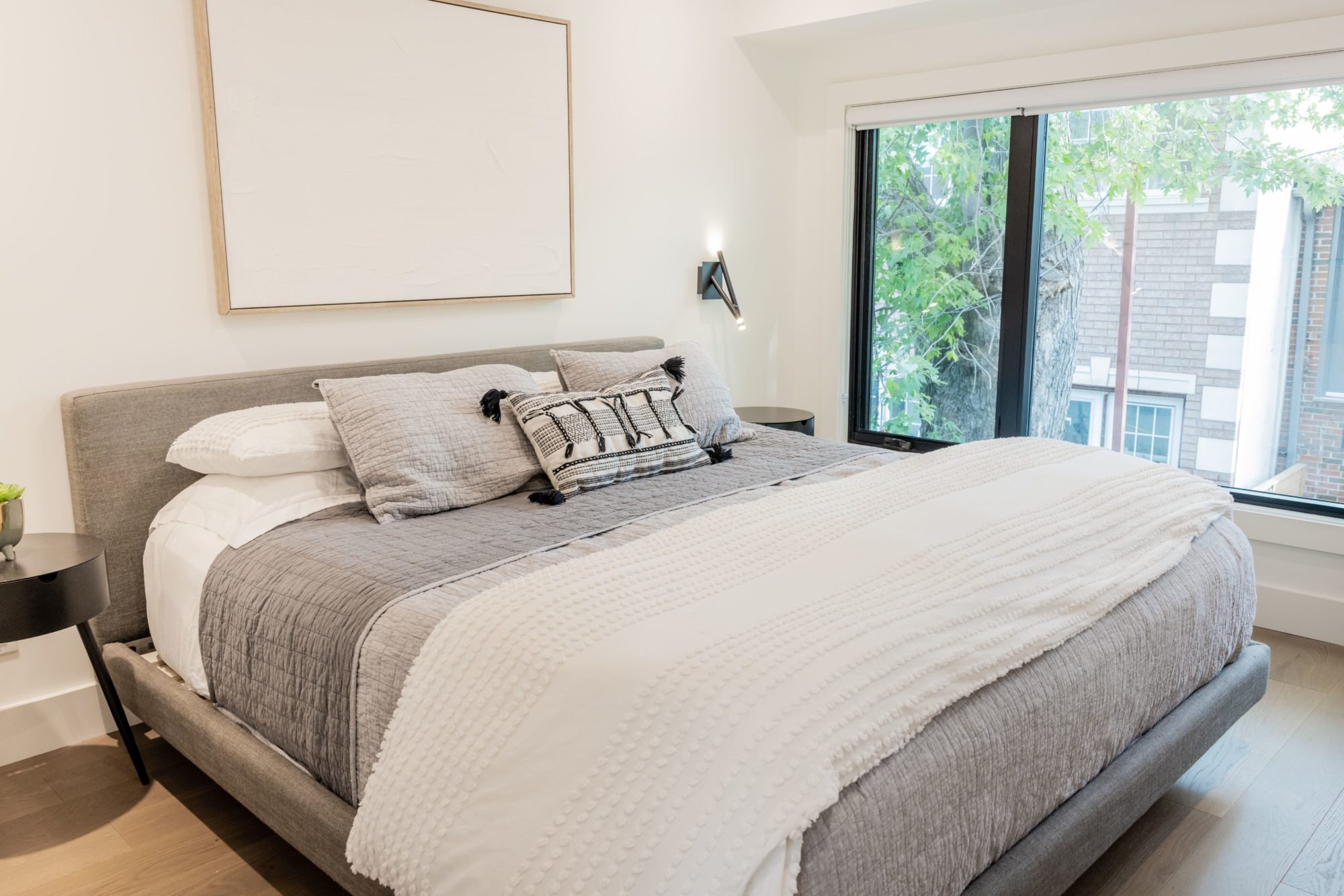 And this is the main bedroom’s ensuite. 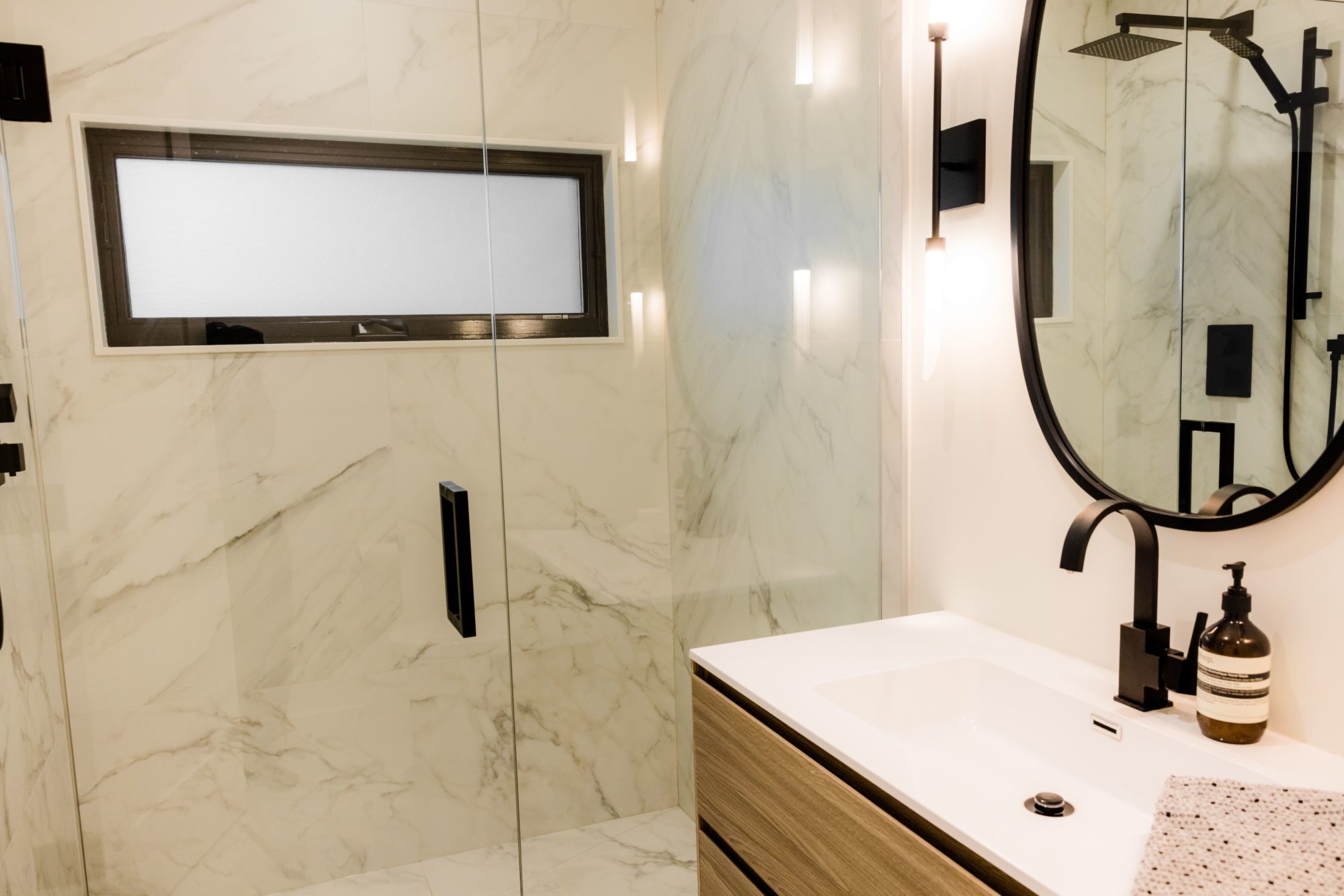 Briar chose this bedroom for herself, along with the furniture and paint colours (with Heather’s coaching). Both of the children’s spaces overlook the laneway. 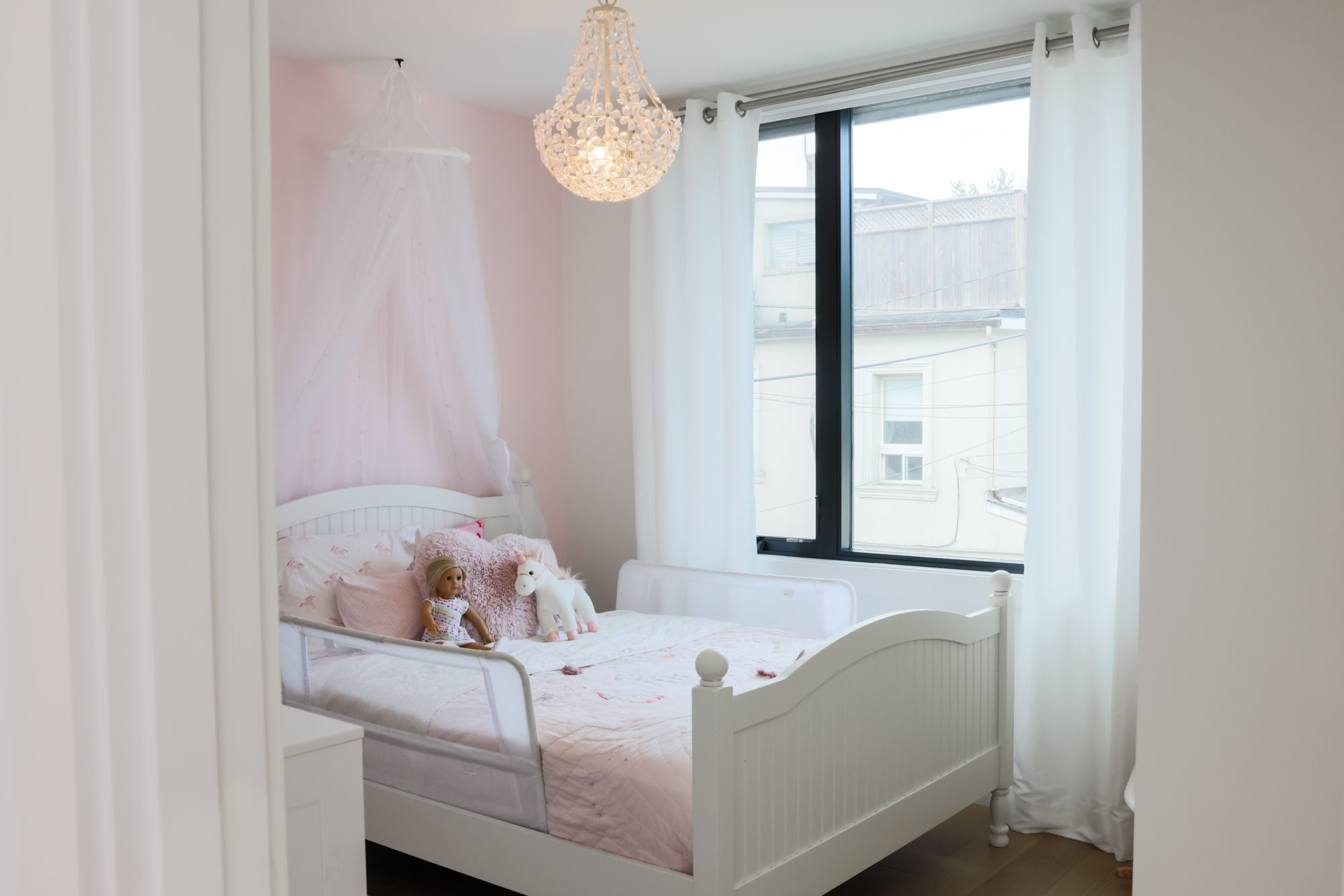 Downstairs is the basement, which has Jordan’s office. It could be used as a fourth bedroom, and they plan to install a Murphy bed for guests. There’s also a second TV room below, where the girls can play. 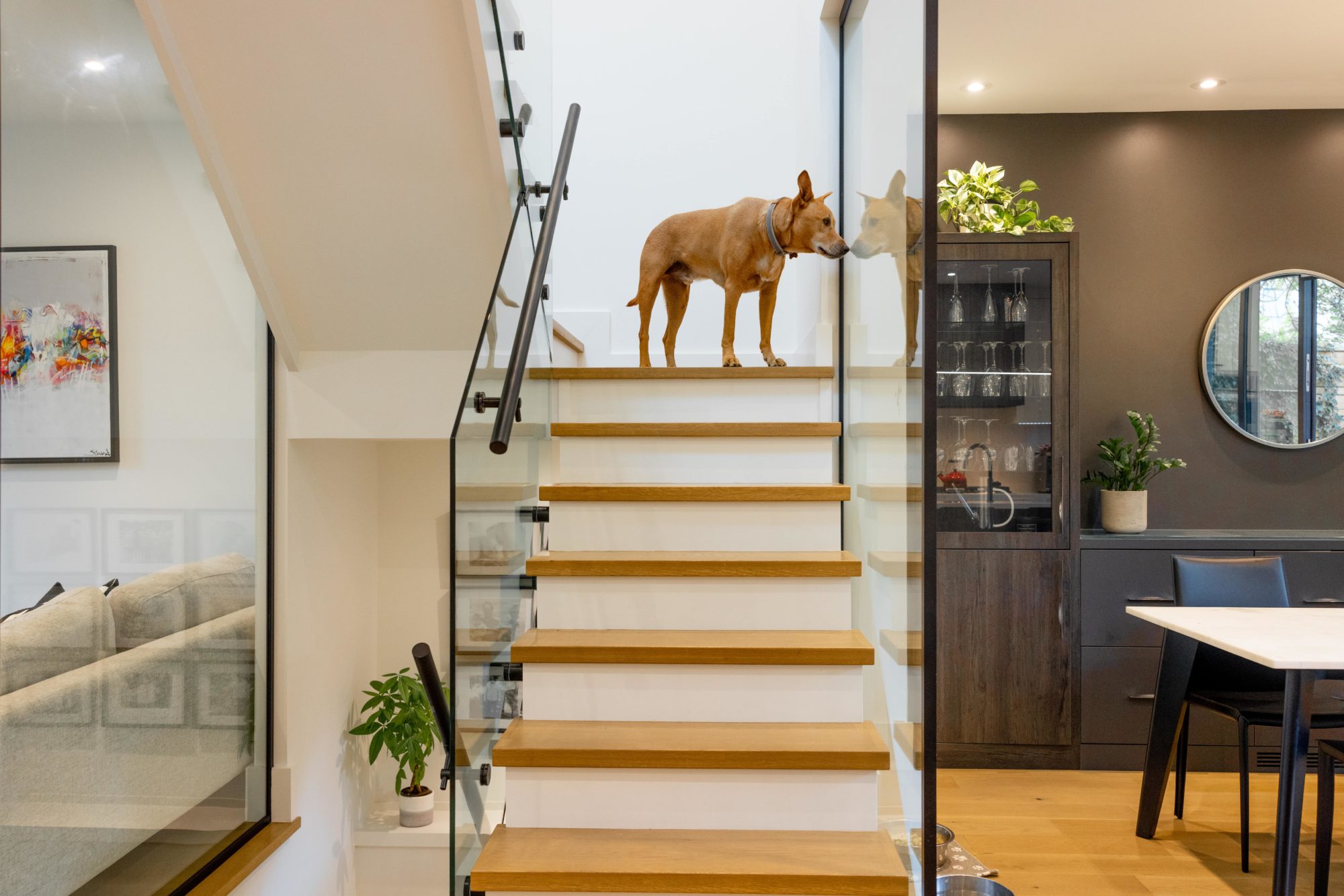 The laneway is as yet unnamed, so deliveries can be tricky. Mail and deliveries still go to the original house. The Rasberrys are currently working with the city to name the laneway, but 50 per cent of residents who share it need to be on board first. “It has been more challenging than we expected,” says Jordan. Aside from that, he and Heather are happy in their new home. It’s quiet, safe and comfortable. After sharing duplexes and triplexes with tenants over the years, they feel lucky to finally have a space of their own. “I’d be happy if this was our forever home,” Heather says. 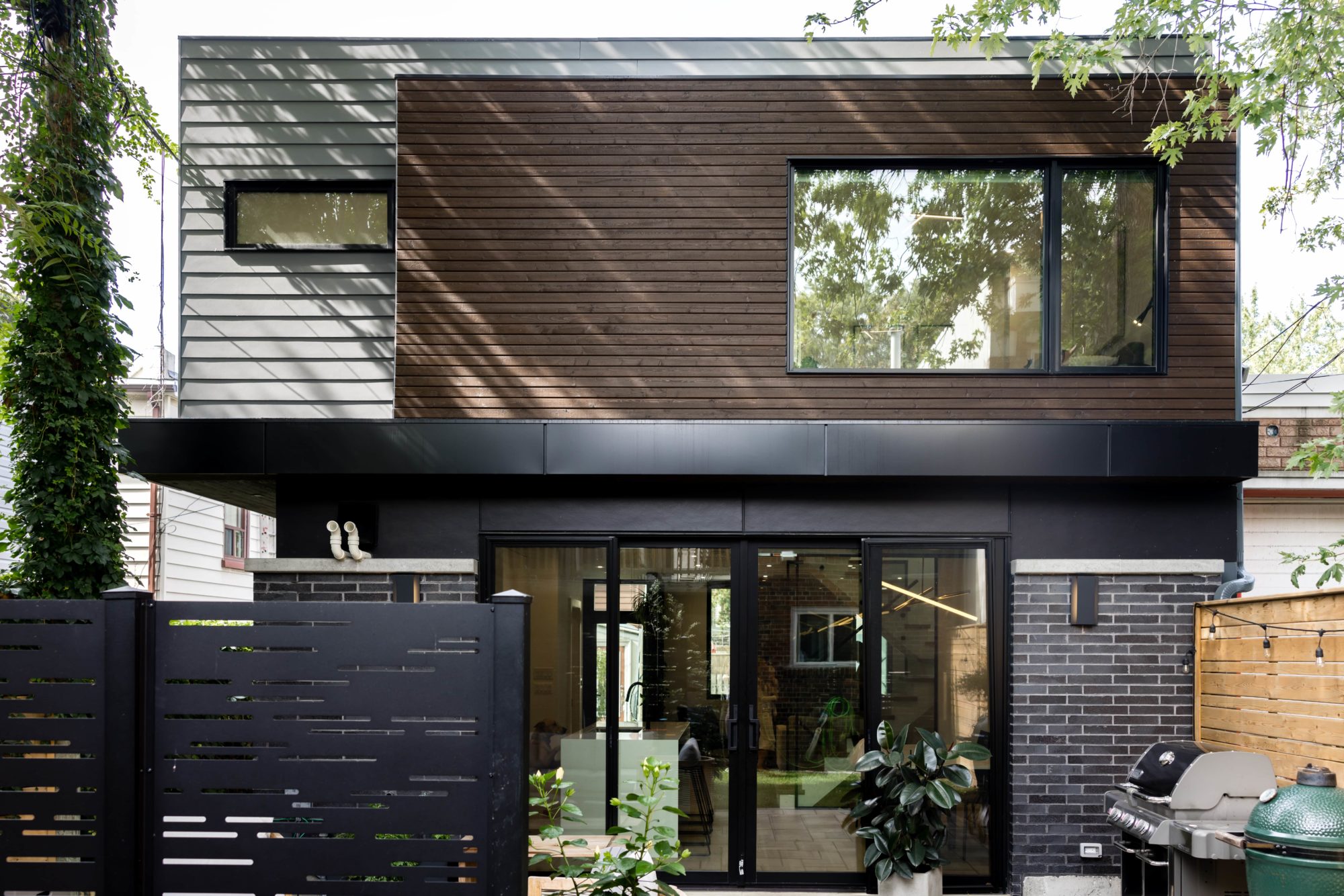