Boutique townhouses in the heart of Riverdale, where city meets lush urban greenery.

There’s no question the east end is booming these days, and Gerrard is quickly being recognized as one of the most up-and-coming streets in the entire city. (It’s even been called the “Ossington of the east.”) North Riverdale in particular was even ranked #2 on Toronto Life’s Ultimate Neighbourhood Ranking. Until recently, housing options in the area were pretty much limited to a few sad apartment buildings, a select number of century-old lofts and, of course, plenty of cute semi-detached homes. However, there’s another option about to hit the market for buyers who aren’t interested in home-ownership hassle, but who also hate the thought of living in a cookie-cutter condo.

Elevate at Logan is the latest project from Kaleido Developments, a family-run company founded in 2014 with a vision to build unique, low-rise communities in the GTA. This particular development will appeal to former west-enders on the hunt for cool, one-of-a-kind spaces east of the DVP—and is exactly what the neighbourhood needs. The four-storey townhouse complex only has 41 units, and is sleek and contemporary while still giving a nod to the neighbourhood’s historic features with modern luxury finishings, high end appliances such as the Miele 30 inch stainless steel gas cook top, wall oven, free standing fridge, under cabinet hood and dishwasher. The units are all about smart home living, and have high-tech systems in place that coordinate light switches, alarms, Nest thermostats, appliances and Google Home Mini—all from your cellphone.

Everyone knows that there’s a scarcity of low-rise condo buildings in the city, so finding one that’s beautifully designed, with incredible amenities is like a dream come true for Torontonians who refuse to settle somewhere subpar. At Elevate at Logan, a number of units also have underground parking, a stunning roof-top terrace and large common garden spaces equipped with barbecues for easy picnic parties. 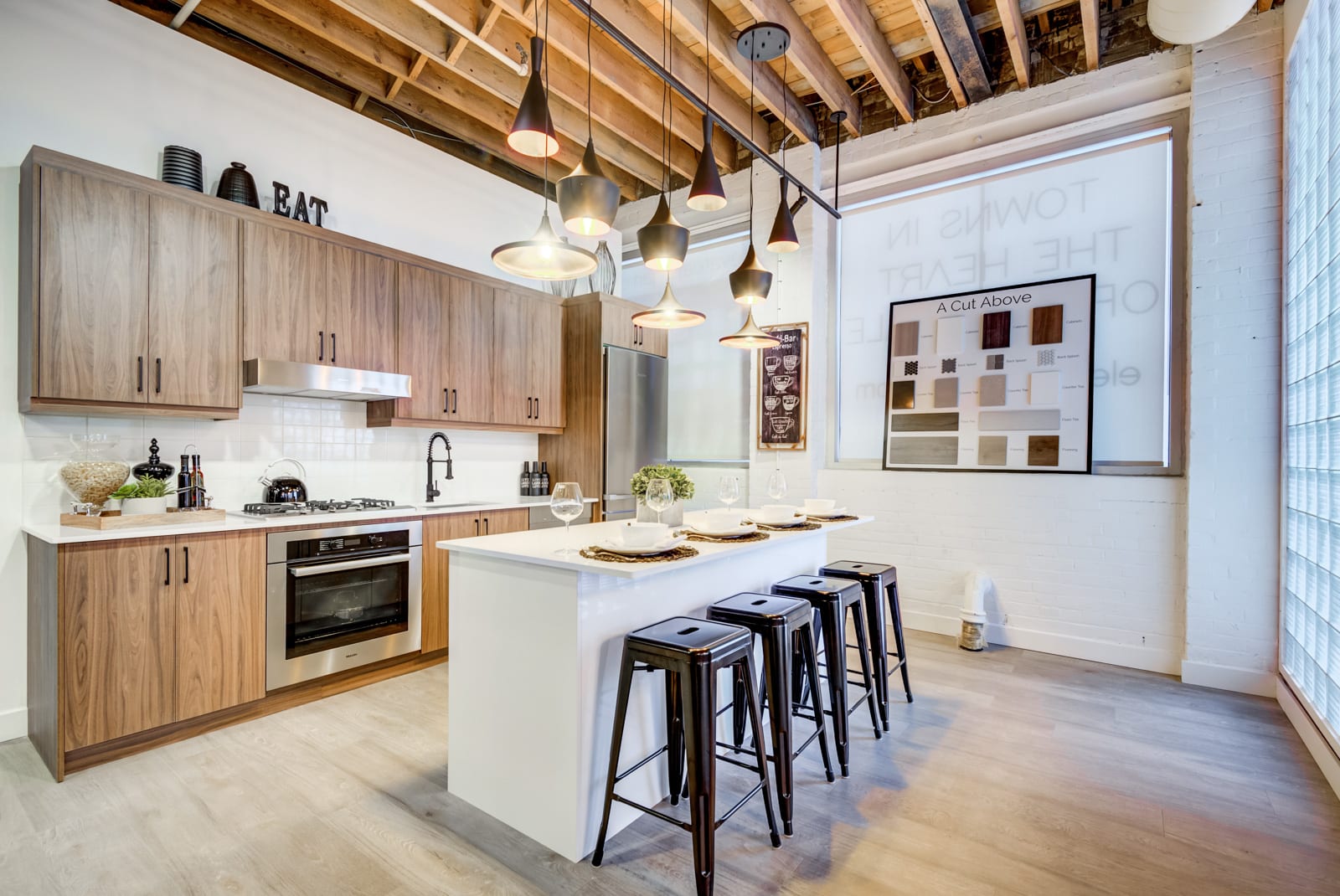 Here, a few reasons to consider registering before it books up (and we predict it will soon).

The location is ideal.
Riverdale is the gateway neighbourhood to the east end—meaning, it’s really not that far east at all. At Gerrard and Logan, residents are smack in the middle of Queen and Danforth and Broadview and Pape, and are still just a quick Uber to the west end. Hopping on the streetcar—which is just outside your door—is a breeze, and Pape Subway Station is just ten minutes away. There’s never any risk of feeling disconnected from downtown, and the stats prove it. There’s a 94% walk score, 94% transit score and an 87% rider’s score.

But there’s also hardly any reason to leave the ‘hood, especially considering Gerrard is so buzzing right now. One of the best new restaurants in the city, Wynona, is right at the corner of Logan. It offers mouth-watering made-from-scratch pastas and has an all-natural wine list to die for. Further east, Lake Inez is a foodie paradise, with Asian street food and shared snacks from well-known chef Robbie Hojilla. Other super-popular places to eat in the neighbourhood include Frankie’s Italian, Chula Taberna Mexican, Eastside Social and La Cubana. As for where to get your caffeine fix, Mad Dog Café, a neighbourhood hotspot for coffee, sandwiches and baked goods, is right at your doorstep. Popular freelance haunts Te Aro and Dineen Outpost are also nearby. And when you’re in need of a post-work beverage, there are many places to kick back with a pal over a glass of chardonnay or a pale ale, including the new Black Lab Brewing on Eastern Avenue, or Poor Romeo right on Gerrard (they make a mean cocktail).

As far as green spaces go, the choices are endless. There is, of course, Riverdale Park a few blocks away, with its epic views of the Toronto skyline. here’s also the Evergreen Brick Works off Bayview, with its kilometres of scenic trails and quaint farmers’ markets. Withrow Park is also another underrated gem. At eight-and-a-half hectares, it’s one of the city’s largest green spaces, and perfect for an evening picnic or game of pick-up soccer. Further south, you can easily escape to Woodbine Beach on a lazy summer Saturday, or take your pets to Cherry Beach to run rampant in the incredible dog park. Corktown Common is also a newly lush place to hang out with a book, and Greenwood Park even has a swimming pool for the kiddies.

For prospective families, Elevate at Logan is also in the middle of an enviable school district, with Pape Avenue Junior Public School, Queen Alexandra Middle School and Riverdale Collegiate all within walking distance. Families and couples also get access to some of the city’s most sought-after grocery options. There’s Rowe Farms on Queen for high-quality meats, Hooked on Queen for the city’s best sustainable fish selection, the Leslieville Cheese Market for bringing your cheese board game to another level, and Raise the Root Organic Market and Victoria Whole Foods for the freshest organic produce and all your health food needs. For every-day grocery runs, there’s a Loblaws right at Danforth and Broadview.

For entertainment, there’s something for everyone. Riverdale Farm is a constant kiddie attraction, where they can pet the animals and learn about milking. Alliance Cinemas is a quaint six-screen theatre showing both Hollywood Blockbusters and more unique titles (there’s also a party room for kids). Music buffs can take in regular rock shows at the super-historic Opera House, and the beautiful new Crow’s Theatre is known for showing well-reviewed plays by Canadian playwrights. For residents who prefer activities on nights out, there’s also a ping pong bar called Smash Ping Pong, a new bocce ball bar called LOB Toronto, and an indoor climbing gym called The Rock Oasis Inc. 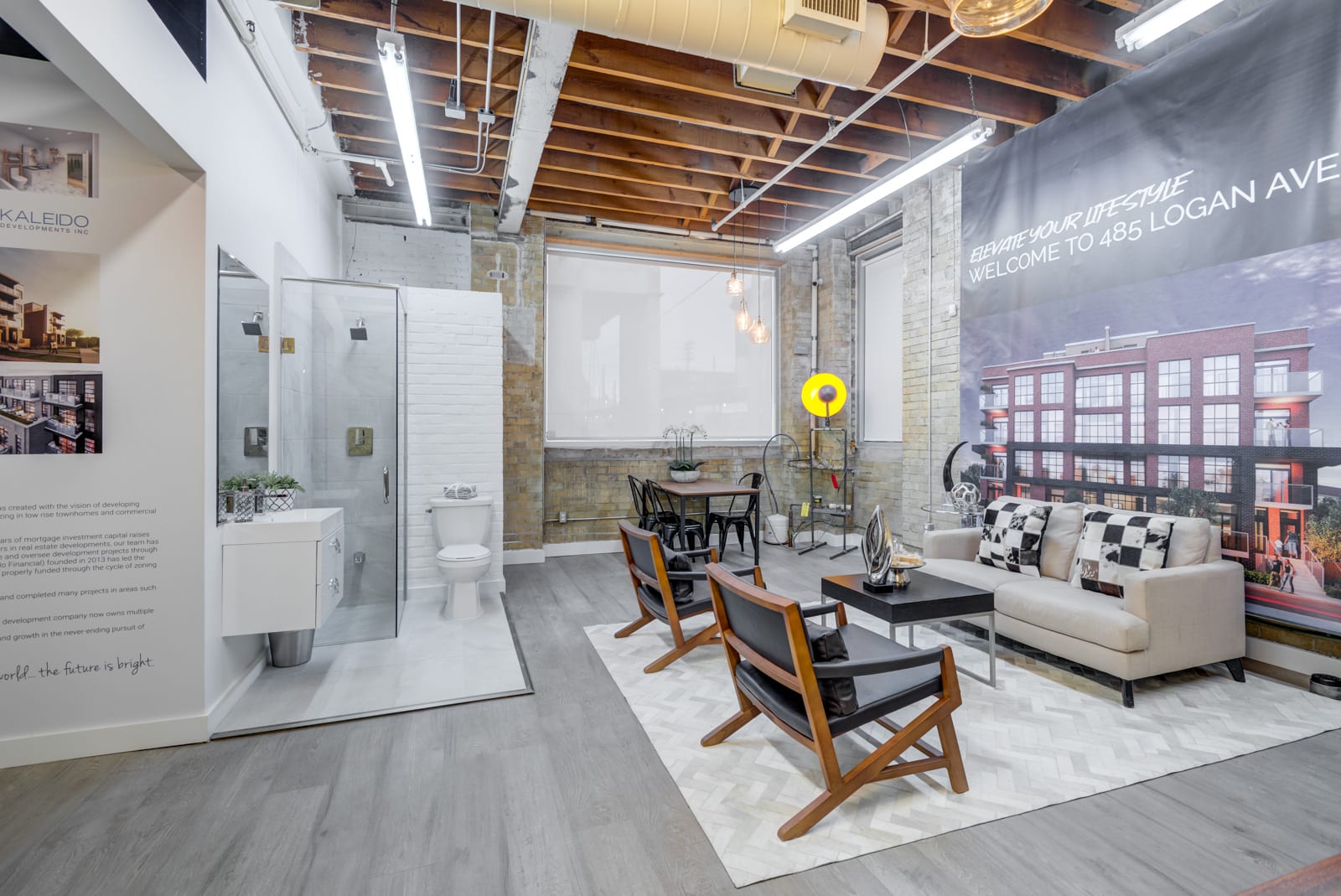 The design is stunning.
Elevate at Logan isn’t a typical townhome complex, with expected layouts and top-of-the-line European finishes. According to renderings, the exterior will look something like a trendy low-rise loft, with red-brick walls, glass balconies and industrial-looking multiple-paned windows. Inside, the units are thoughtfully designed, with spacious living areas, high ceilings and floor-to-ceiling windows that let in a ton of natural light. The interior design is even more stylish, with blond wooden floors, minimalist cabinetry and funky accents. It’s the type of space that could belong to an eccentric artist, a freelance designer couple or a cool young family (a few of the units even have three bedrooms). Plus, couples get the added benefit of extra green spaces while still living downtown. You basically get the square-footage of house, but without any of the inconveniences of home-ownership, like putting the garbage out every week or replacing the furnace.

The company has an exceptional financial record.
A fairly legitimate concern for buyers looking to invest in a new-build is the financial status of the developer. Before starting Kaleido Developments a family-run company, founder Dave Martino spent years raising mortgage investment capital for other massive developers. Kaleido’s sister company, Kaleido Financial, is responsible for raising all the capital to ensure their properties are properly funded from the zoning phase all through completion. A few of their other communities currently under construction include Clanton Park on Sheppard, Wenderly Park Towns in North York and Trafalgar Castle Towns in Whitby.

Elevate at Logan’s sales office will be opening soon at 240 Logan Avenue. Contact the team at 416-903-7032 or info@elevateatlogan.com.