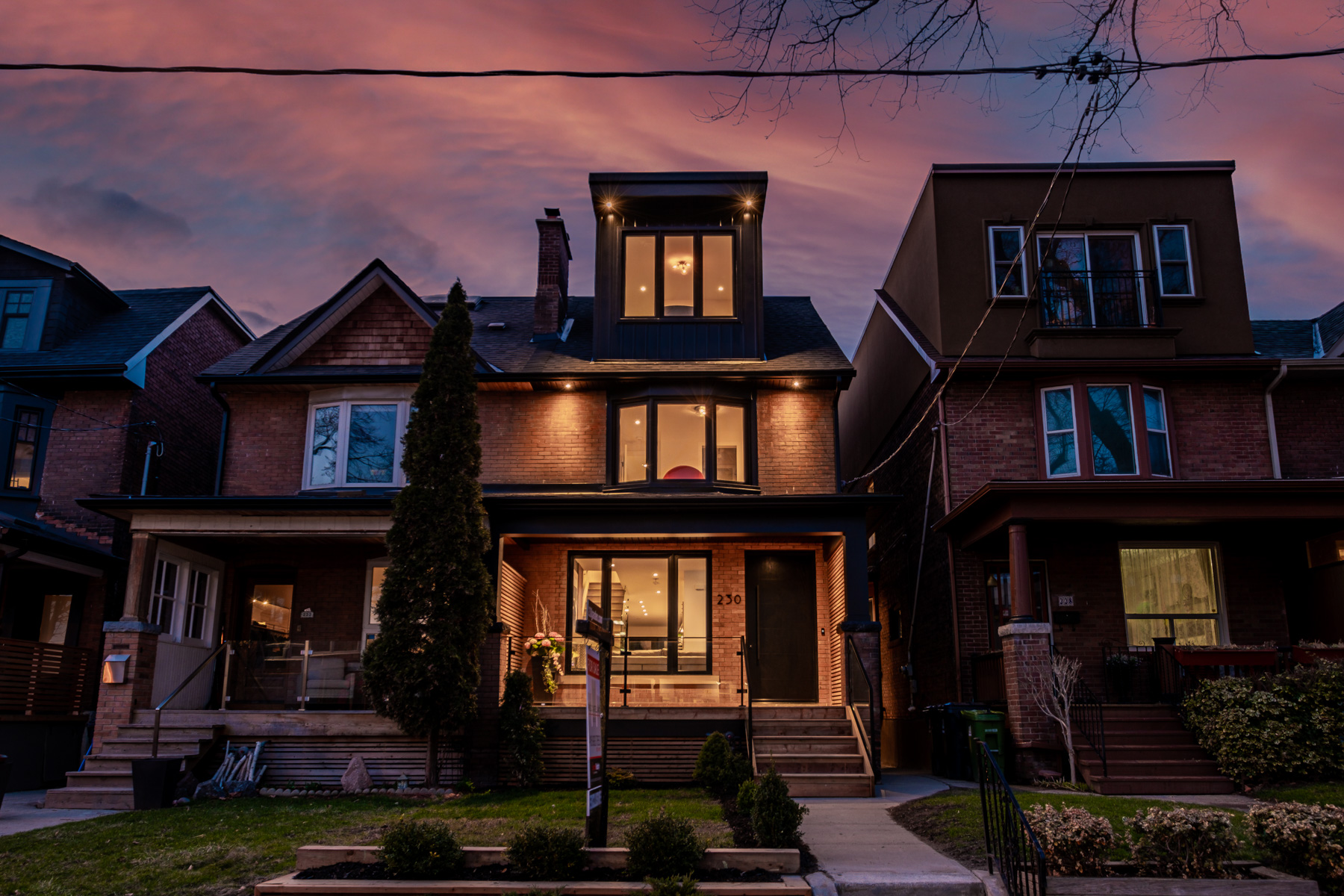 A newly renovated four-bed, five-bath semi-detached home in Roncesvalles. The sellers bought this place back in 2020, when it was a two-storey house, then gutted it down to the studs.

After that, they spent over $1 million redoing the entire place, including the kitchen and bathrooms, front and back decks, and garage.

The location is great for a family, with a junior public school and High Park just minutes away, along with the shops and restaurants of Roncesvalles Avenue.

Here’s a close-up of the front deck, which has wooden privacy walls. Check out the oversized front door: 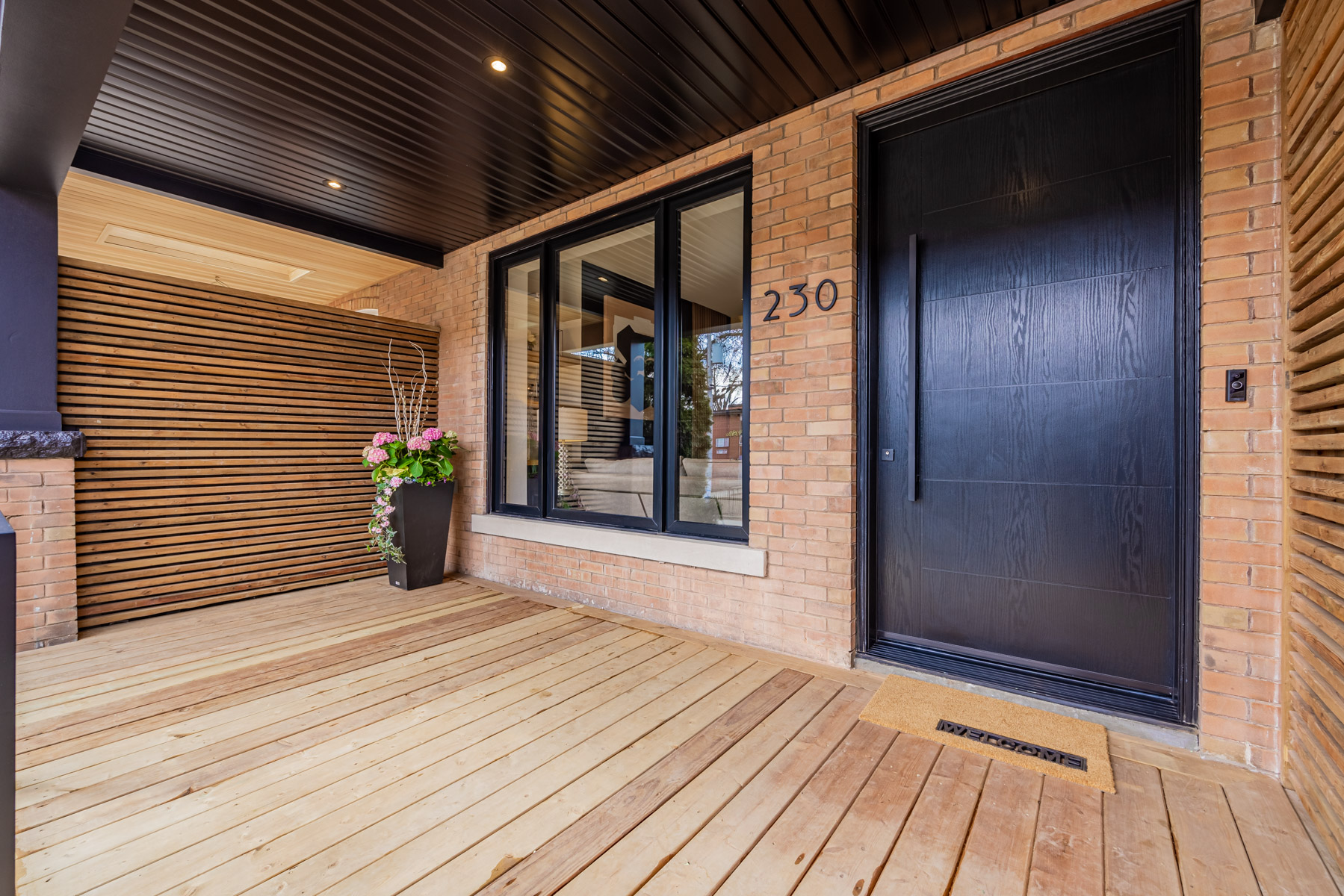 By the front entrance, there’s a small living room with a built-in electric fireplace and an oak-slat feature wall: 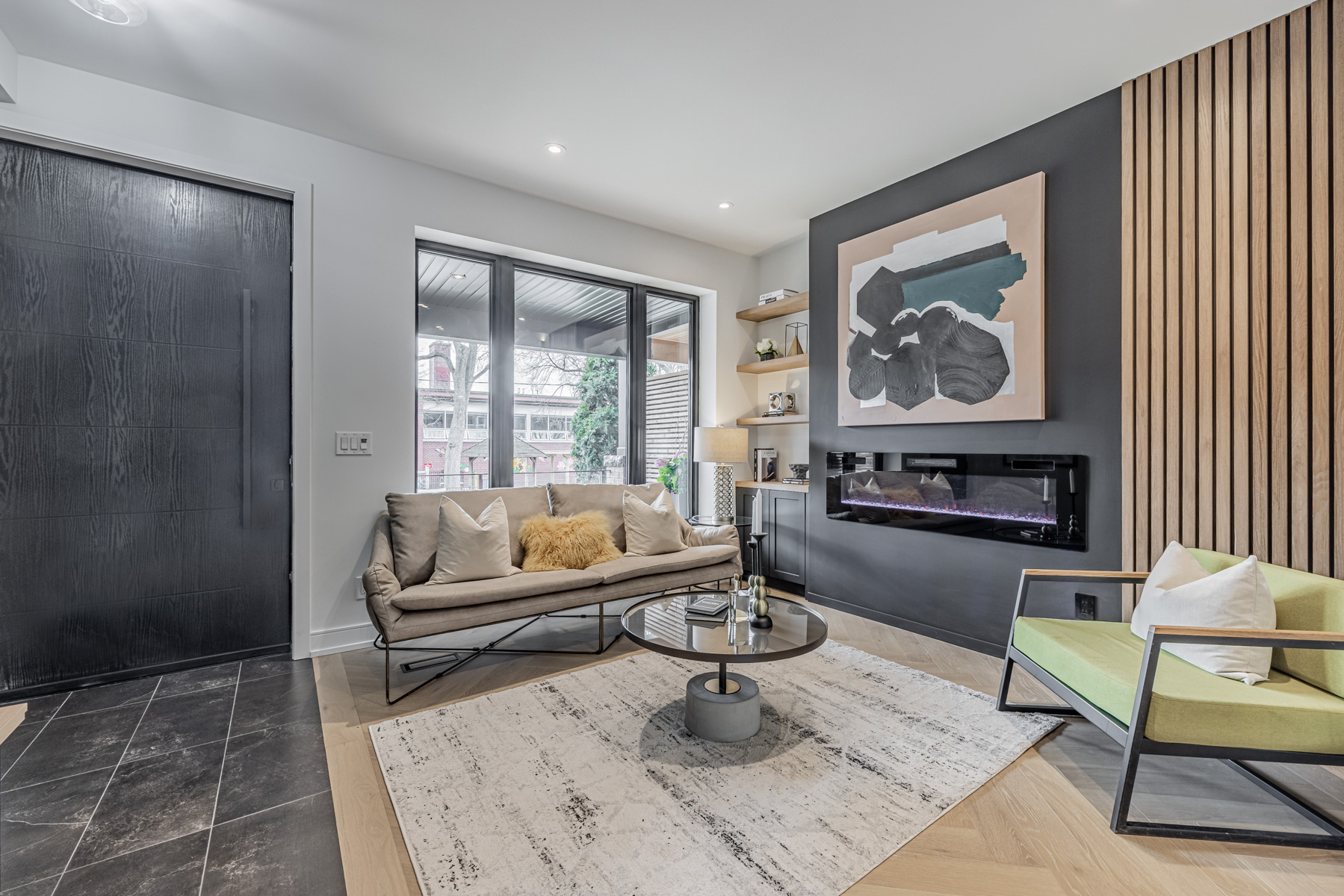 Also on the main level—a powder room with tropical wallpaper: 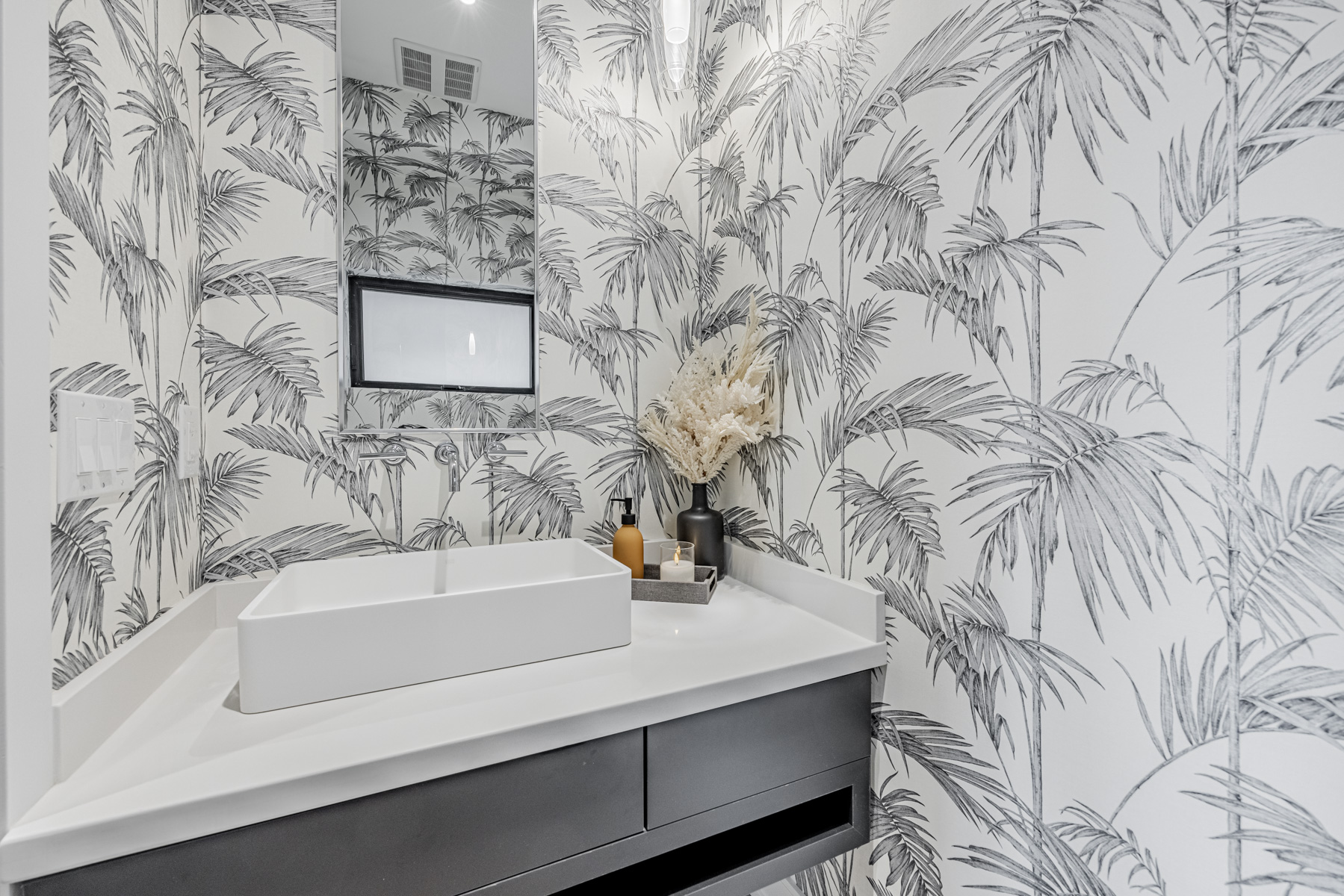 The oak staircase has glass railings: 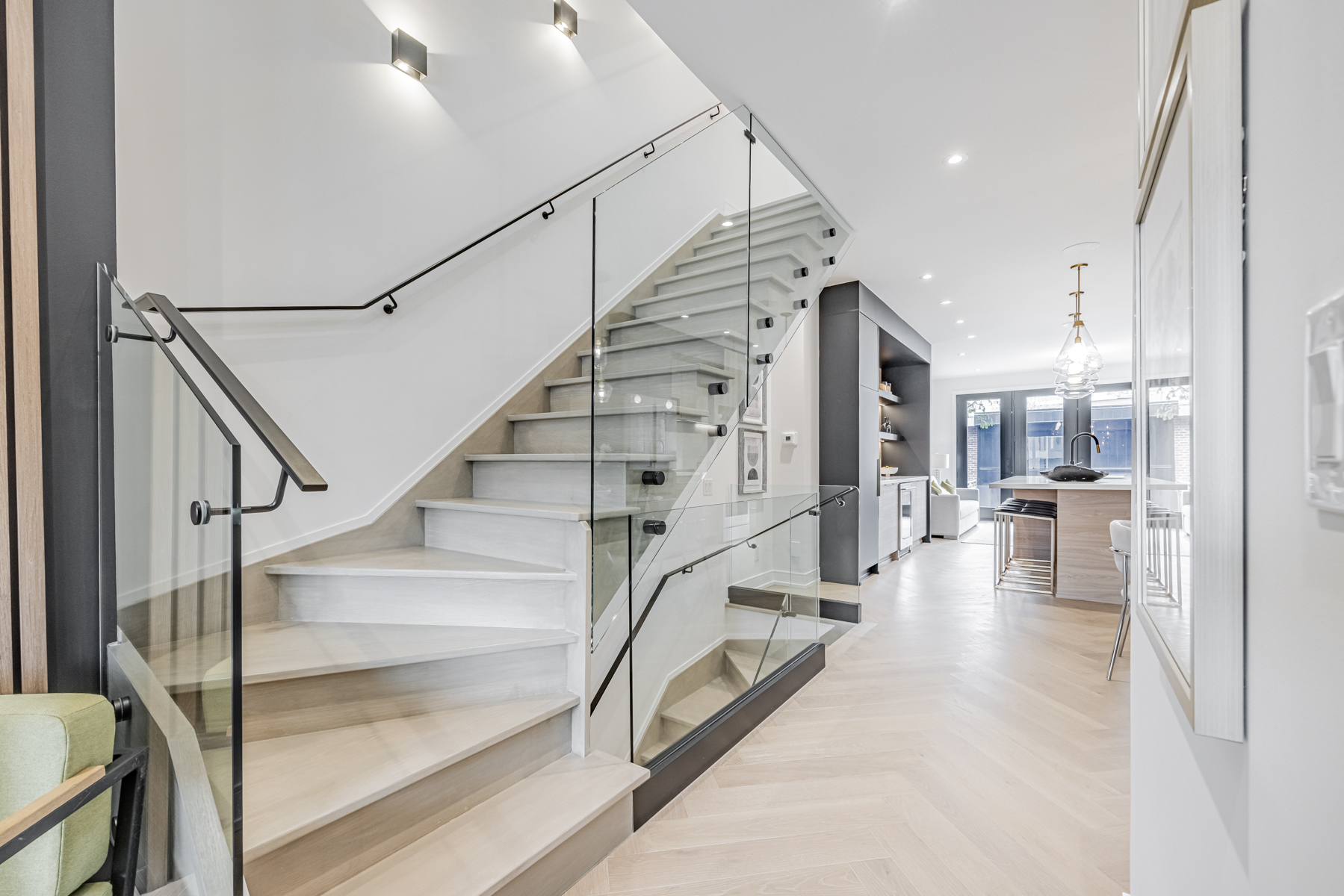 There’s a bay window in the dining area: 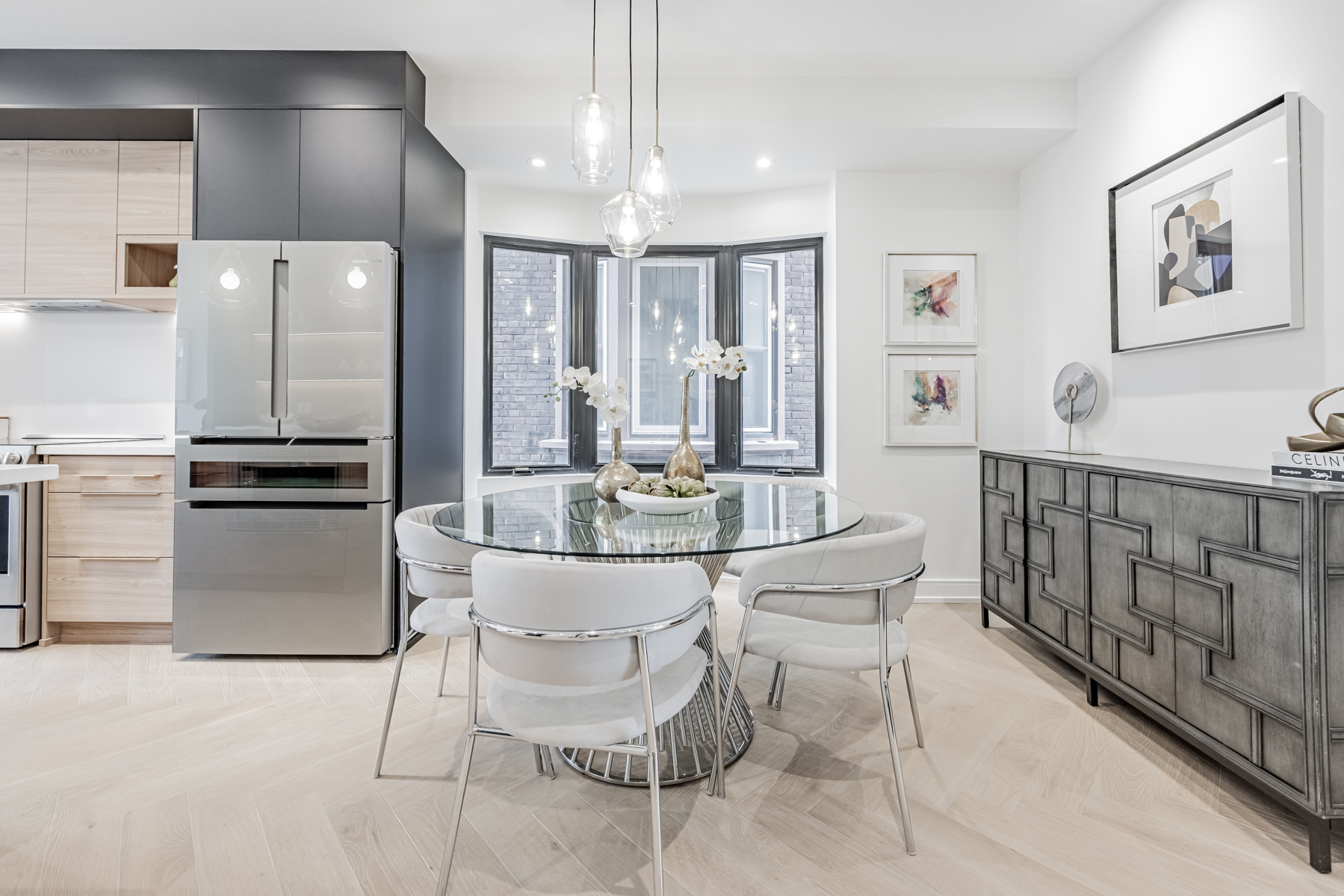 In the kitchen, there’s a black graphite undermount sink in the 10-foot island. If you squint hard enough, you’ll notice the ceiling has built-in speakers: 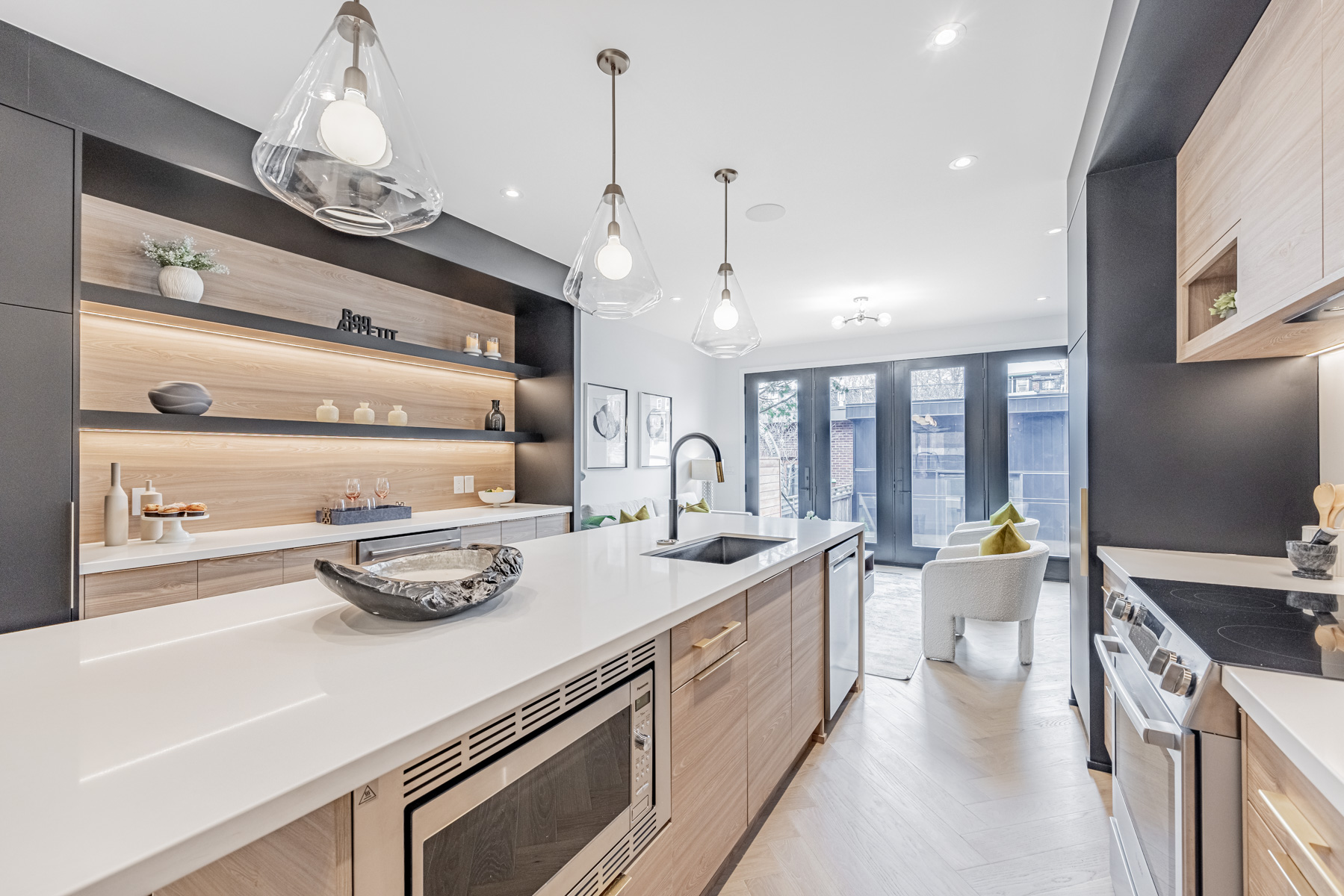 Located just past the kitchen, the family room leads out to the main floor deck: 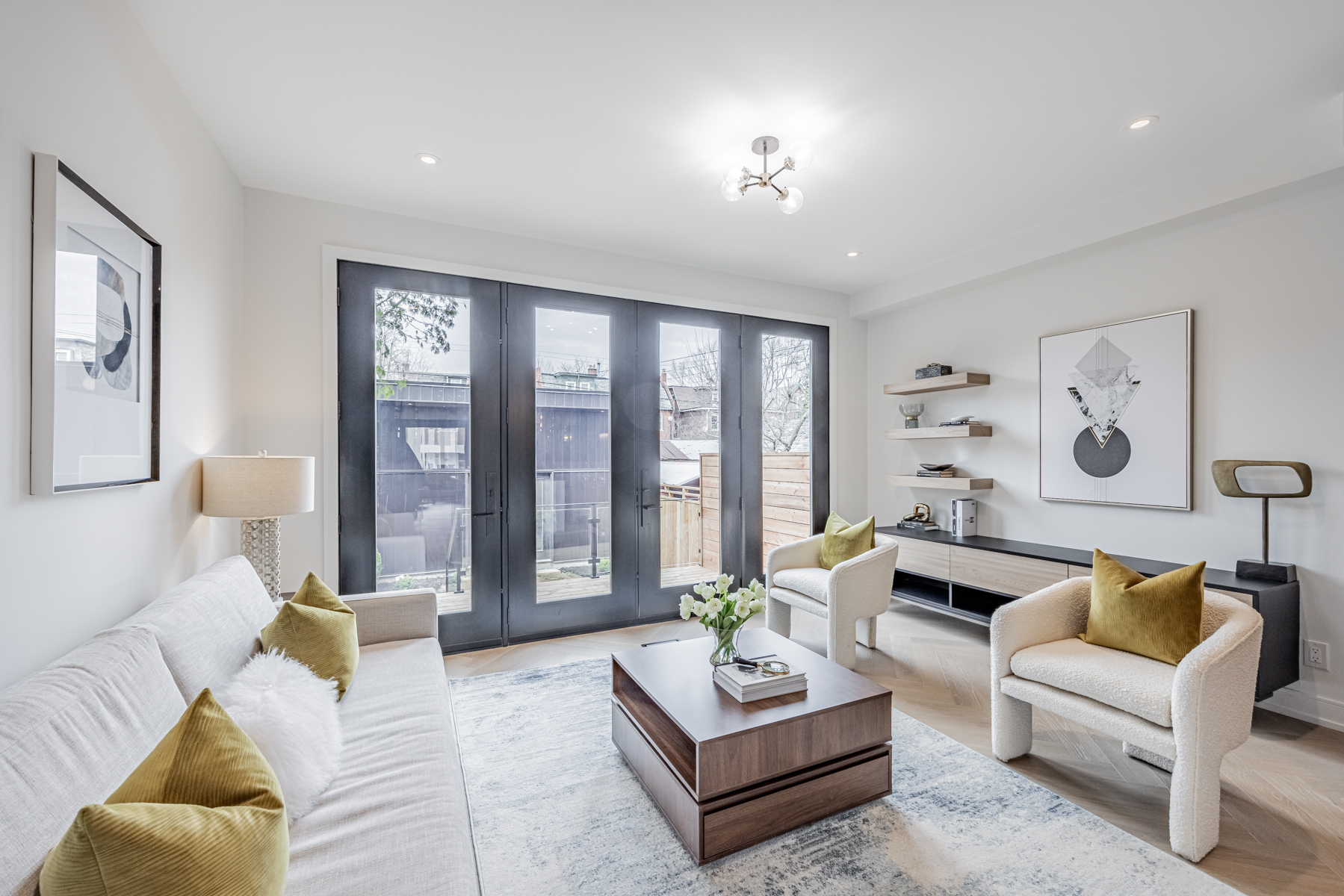 There are three bedrooms on the second level. Here’s the first: 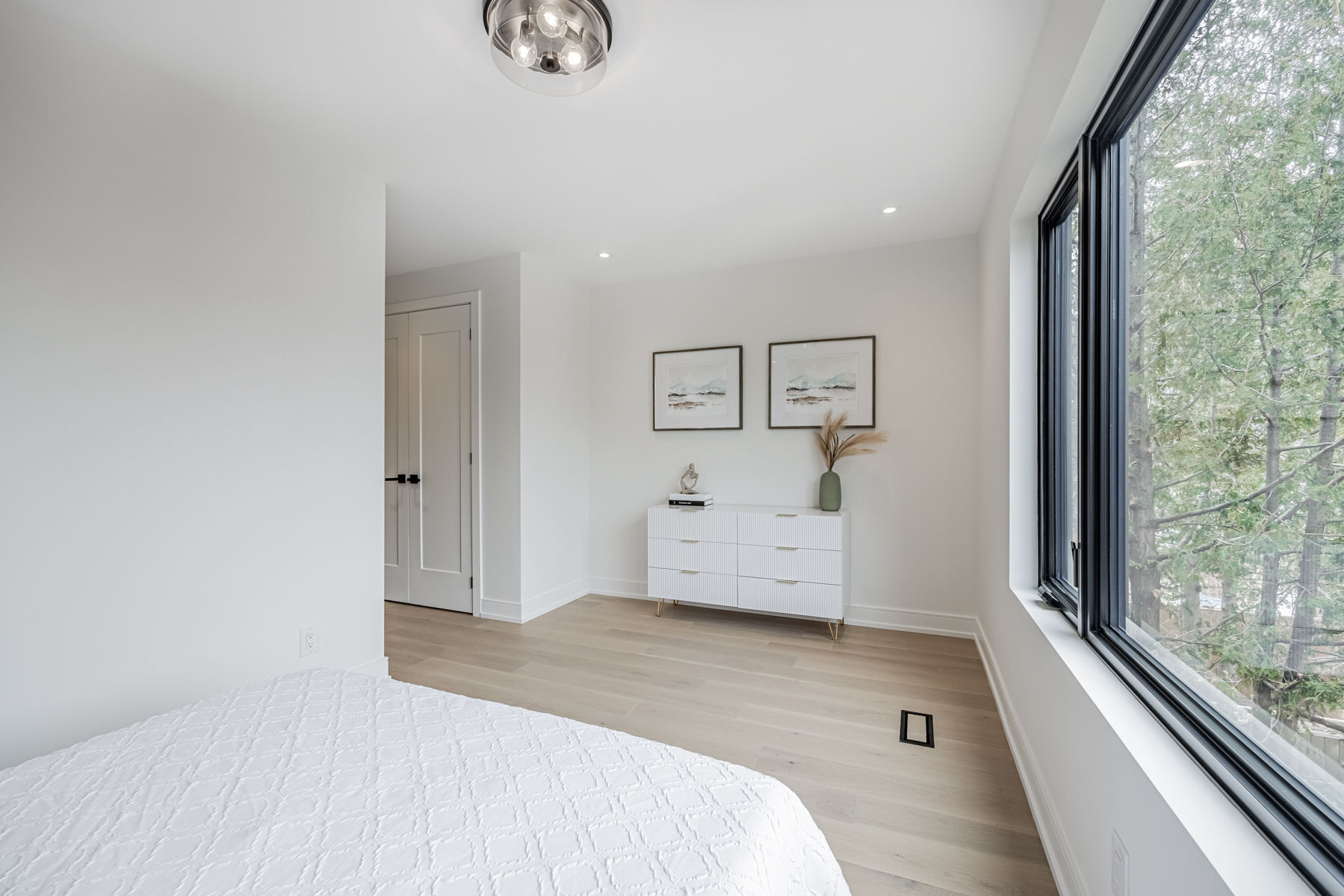 The first bedroom has an ensuite bathroom with a rainfall showerhead and a built-in shelving nook: 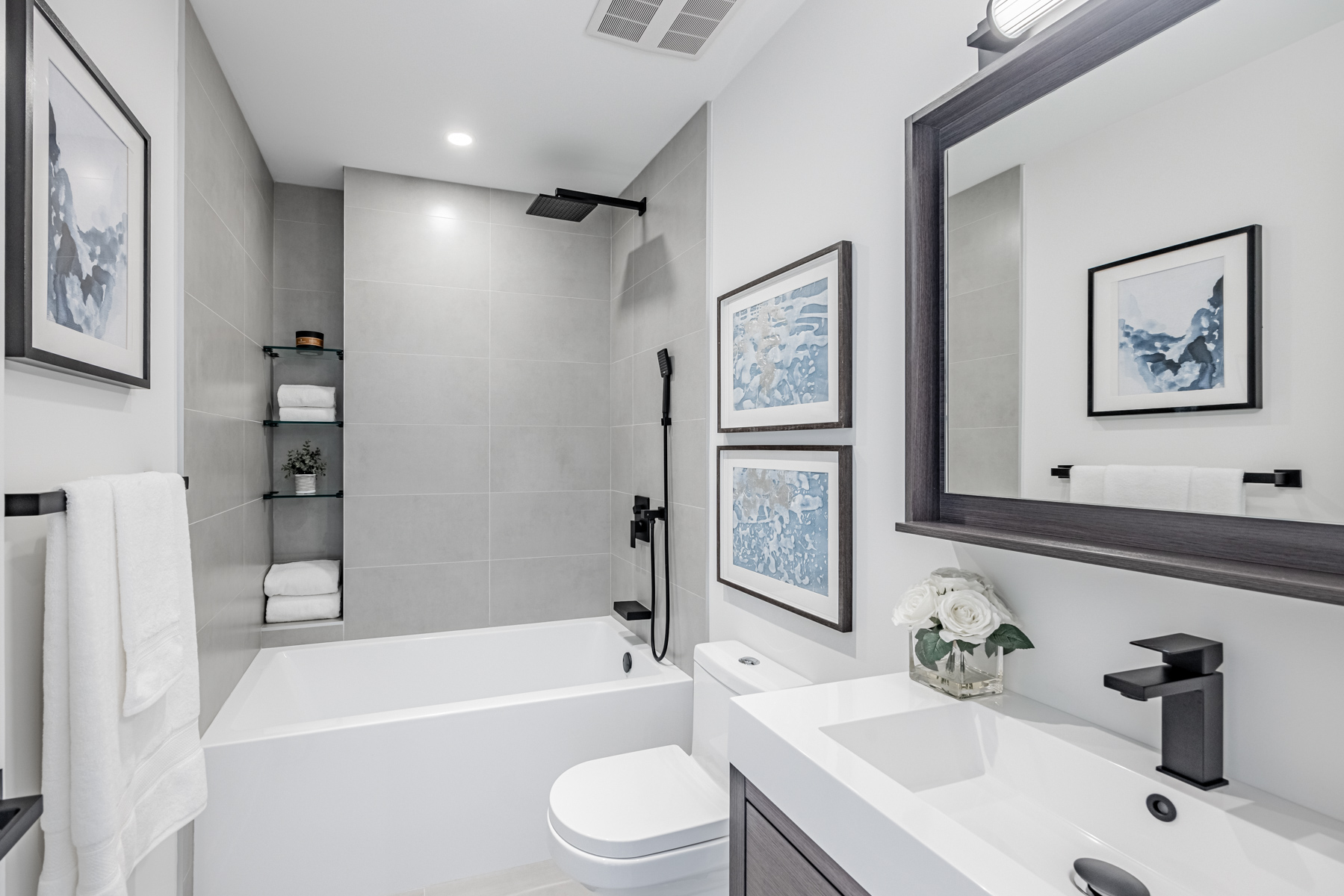 Here’s the second bedroom. It shares an ensuite with the third bedroom: 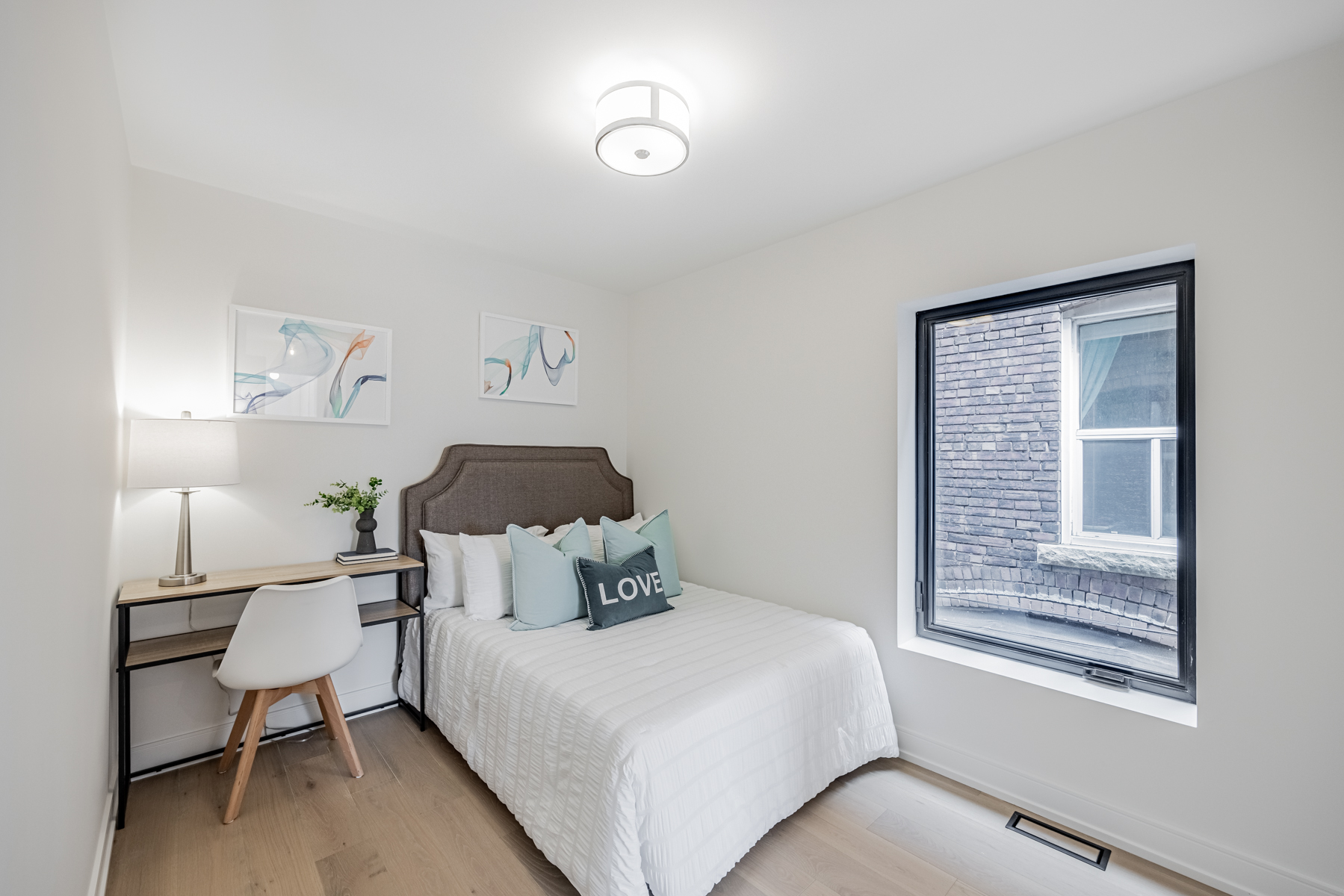 The third bedroom has a bay window that overlooks Garden Avenue: 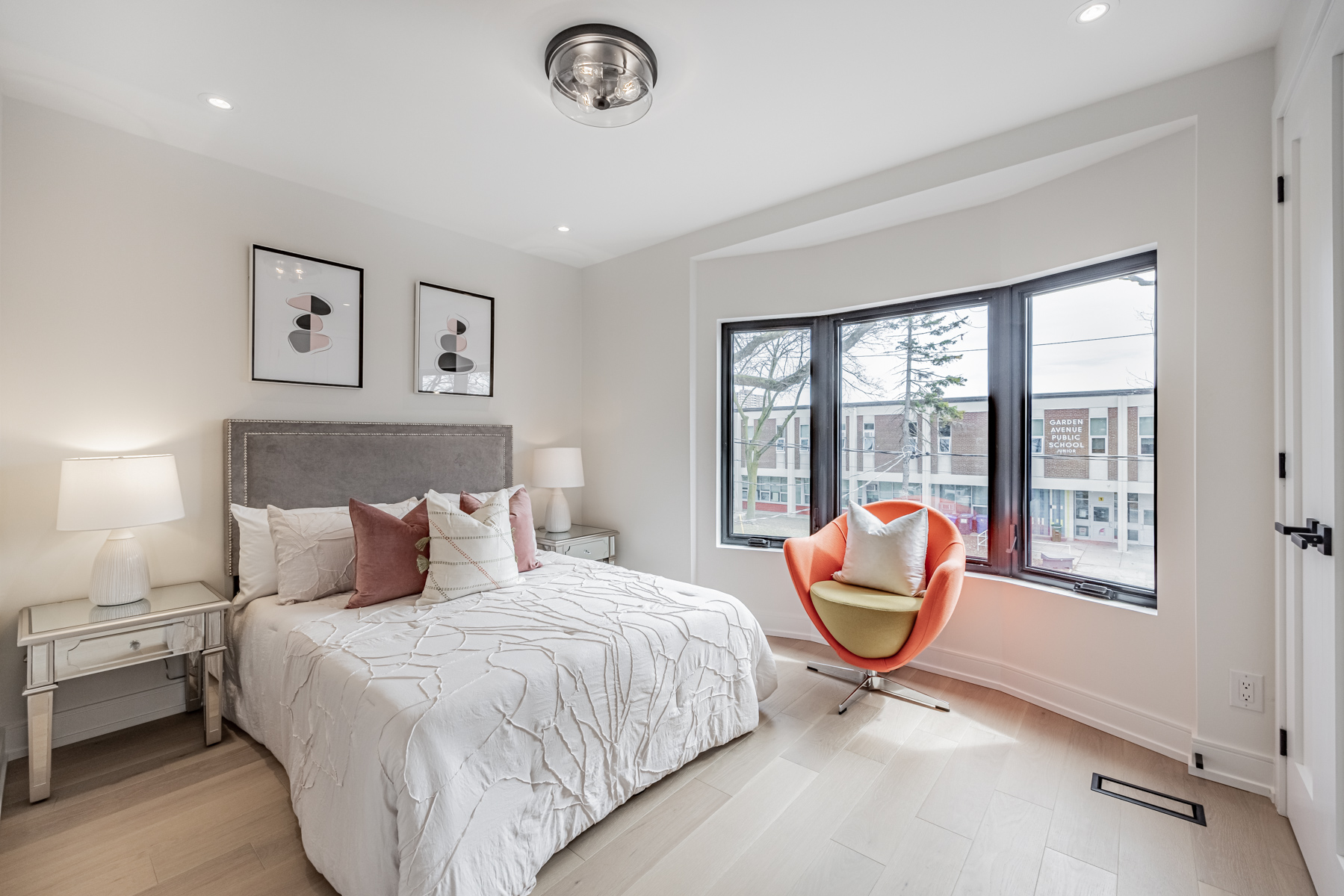 Here’s the shared ensuite, which also has a rainfall showerhead: 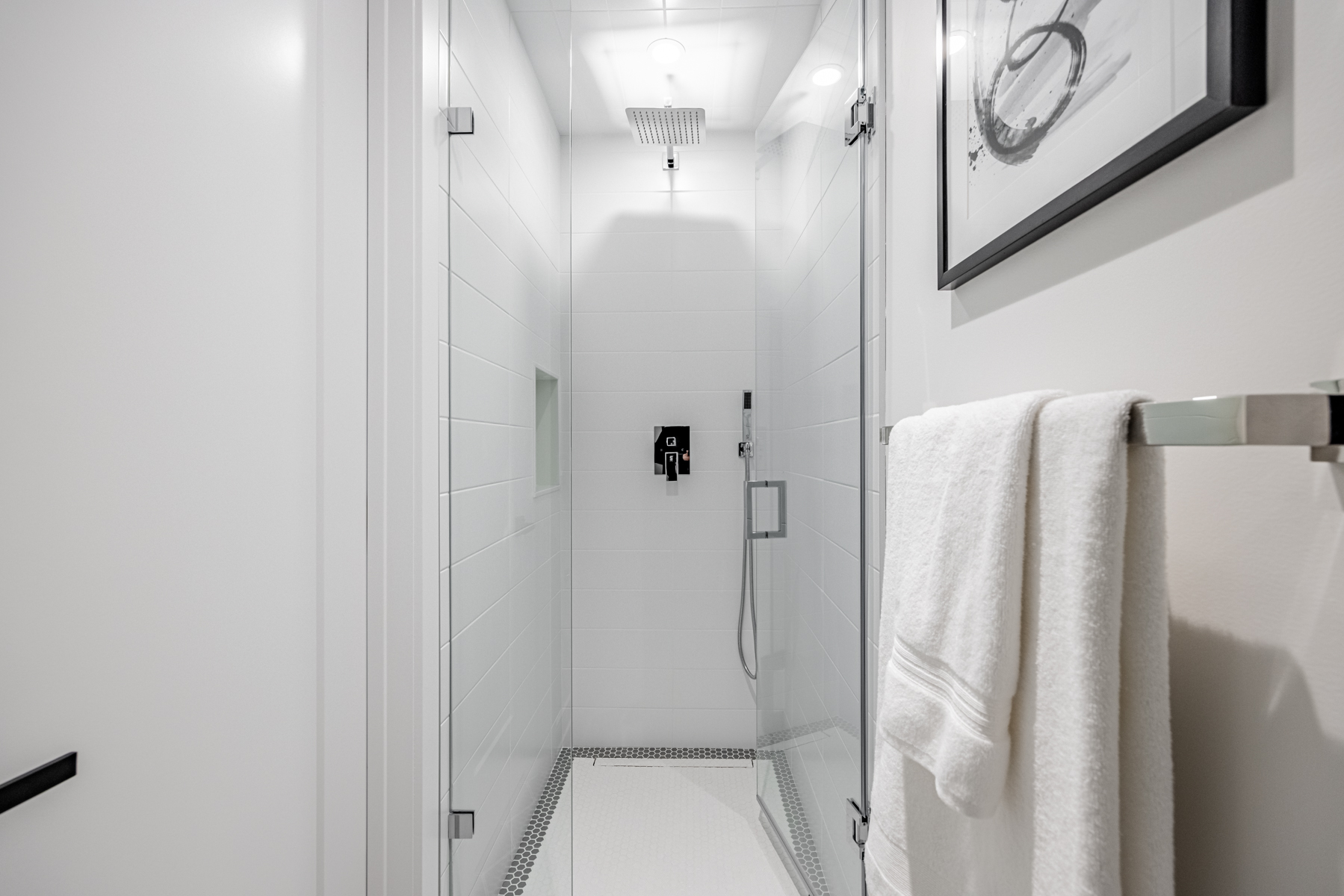 There’s a laundry area on the second floor: 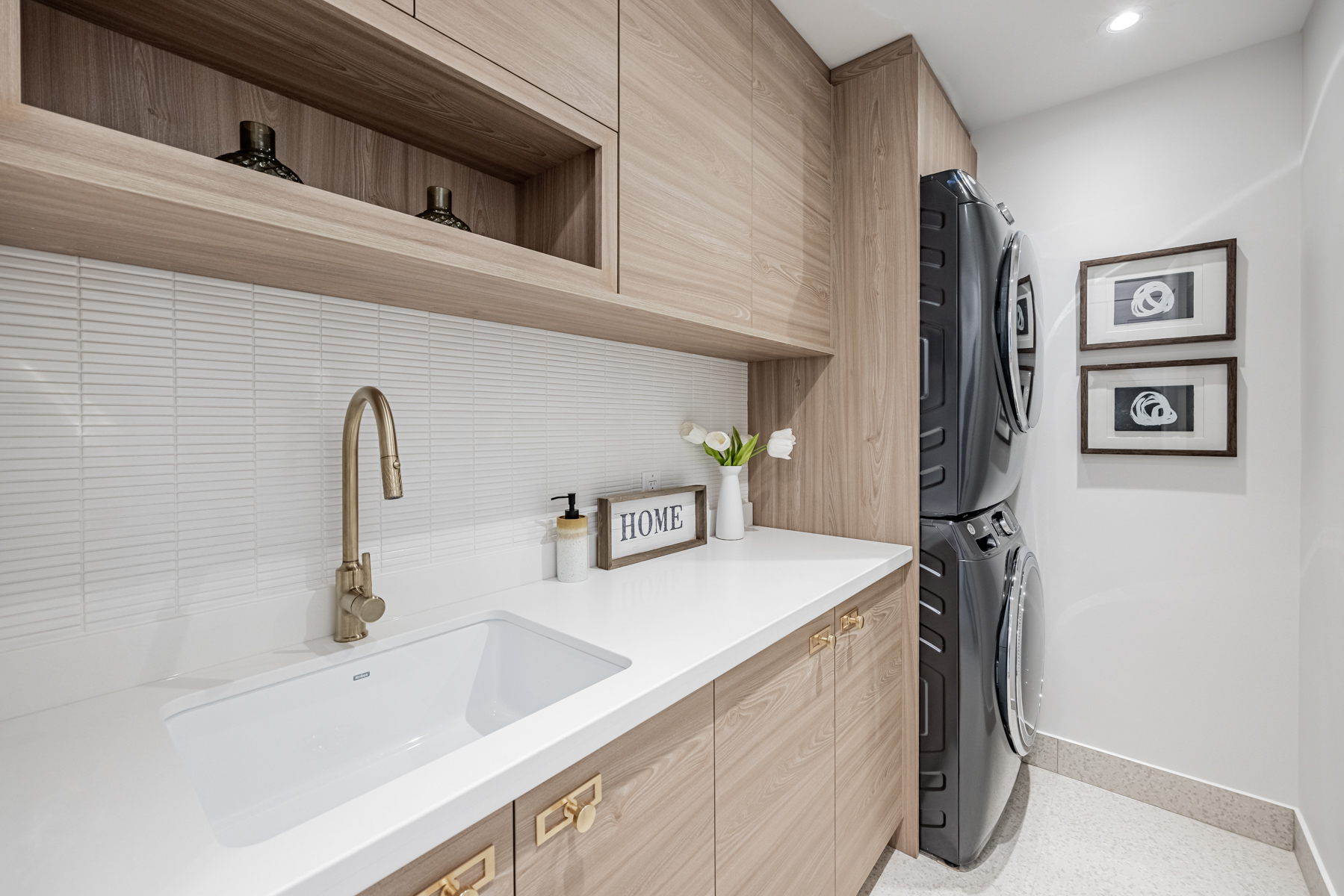 The primary bedroom is in the third floor addition. It has a walkout to a private terrace and a feature wall: 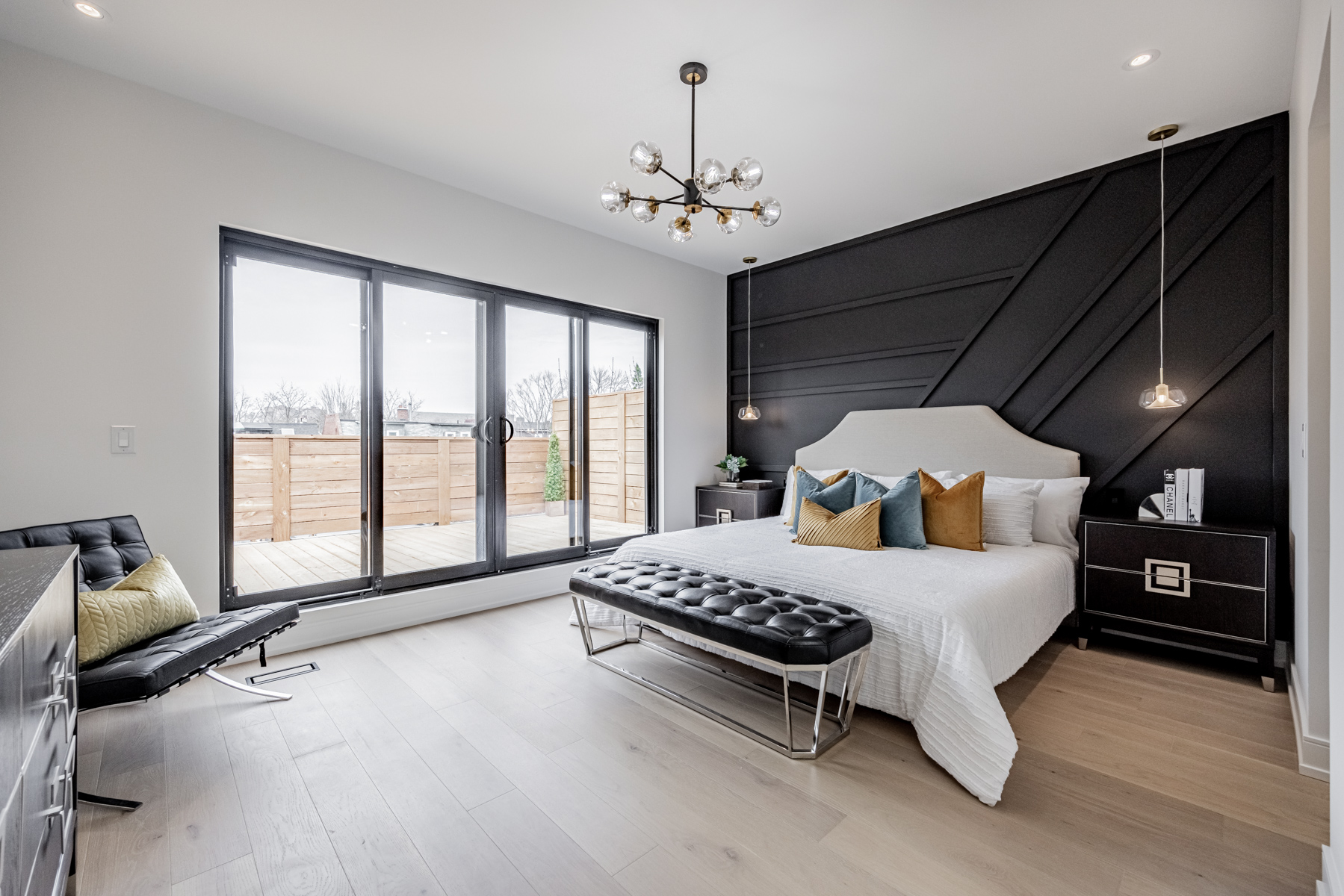 Here’s the primary ensuite. It has heated floors, double rainfall showerheads, a built-in bench and a double vanity made of quartz: 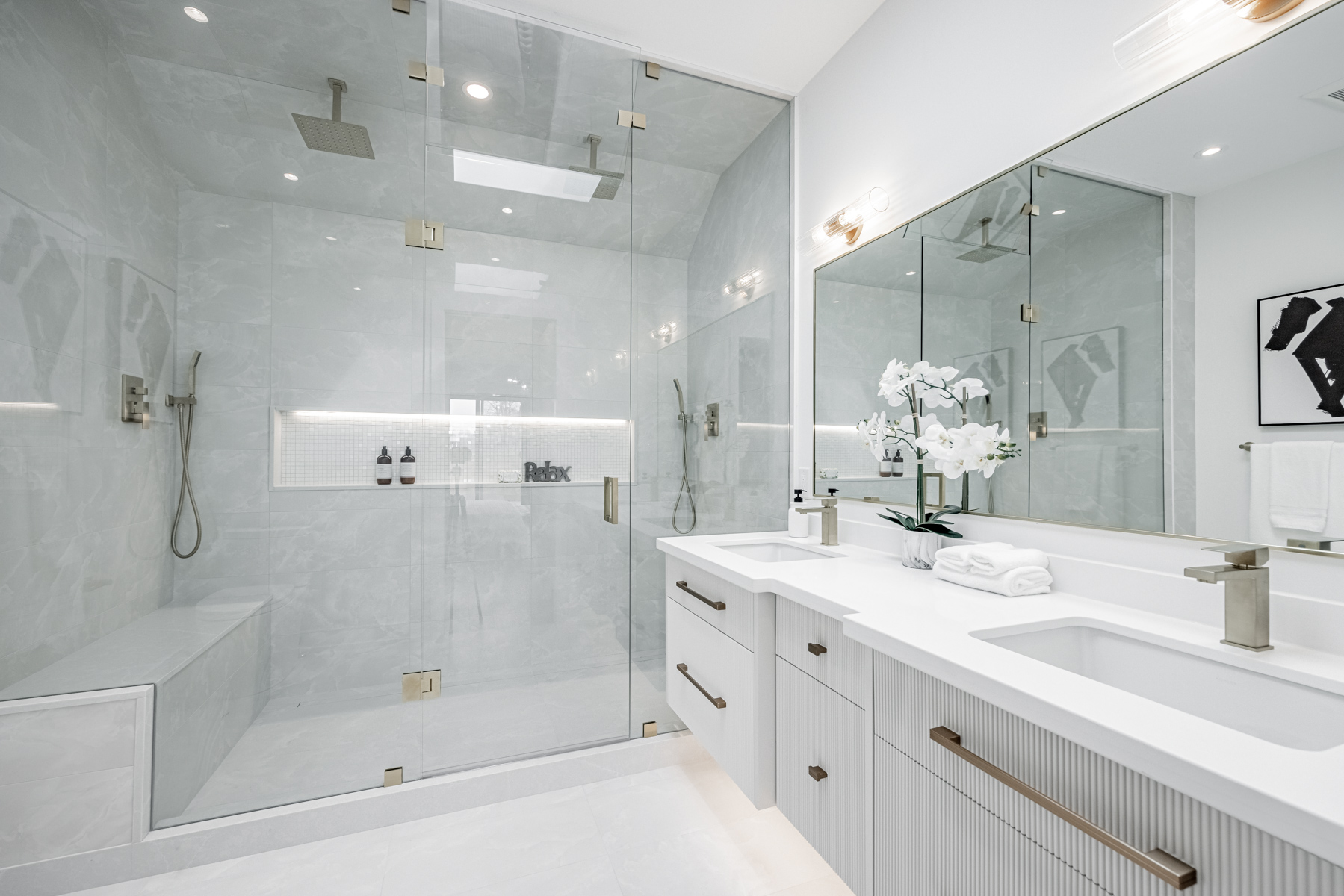 The third floor also has a “bonus room.” It’s staged here as an office, but could be used as a nursery: 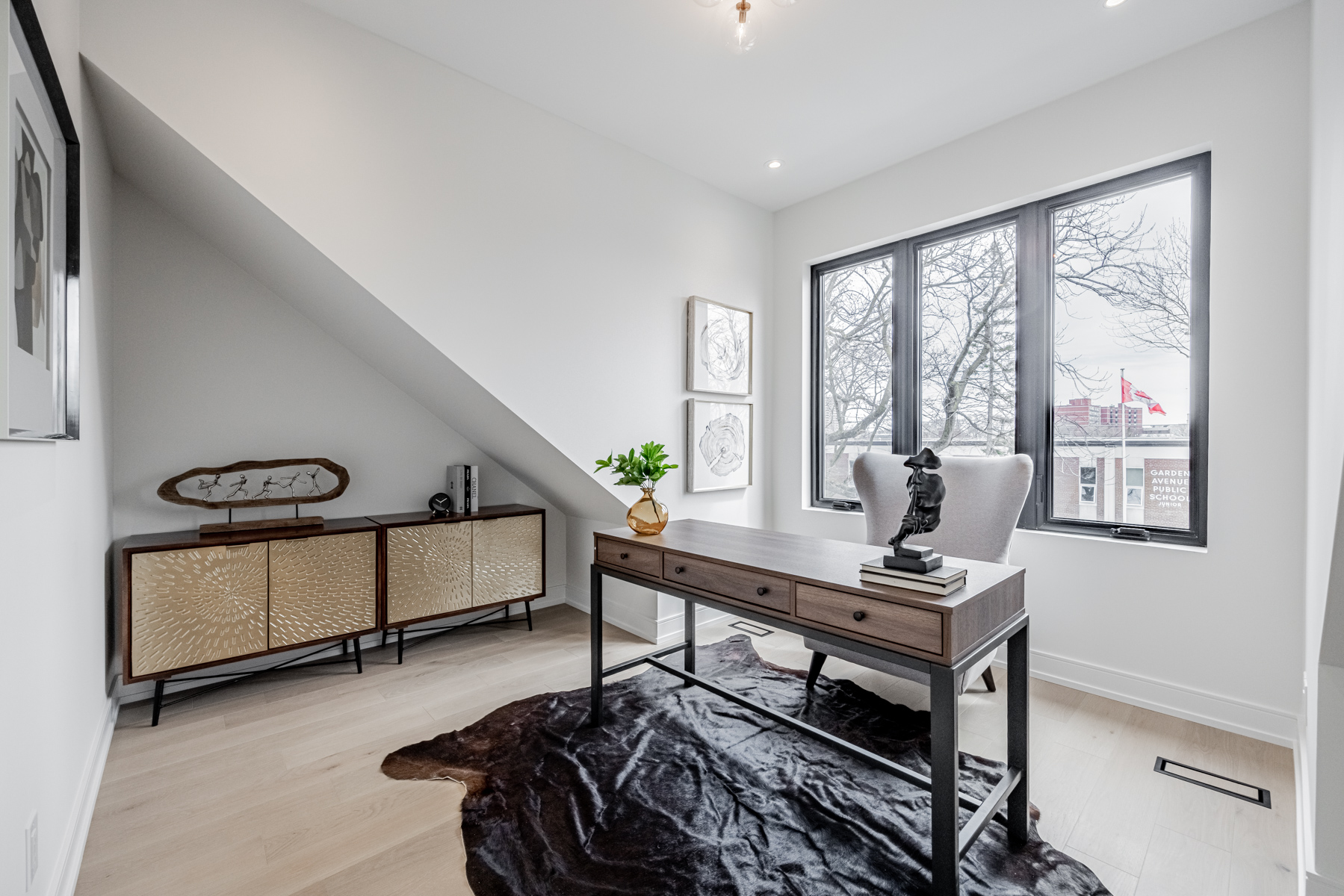 Here’s another view of the open-concept third floor. There are skylights above the stairs and in the bathroom: 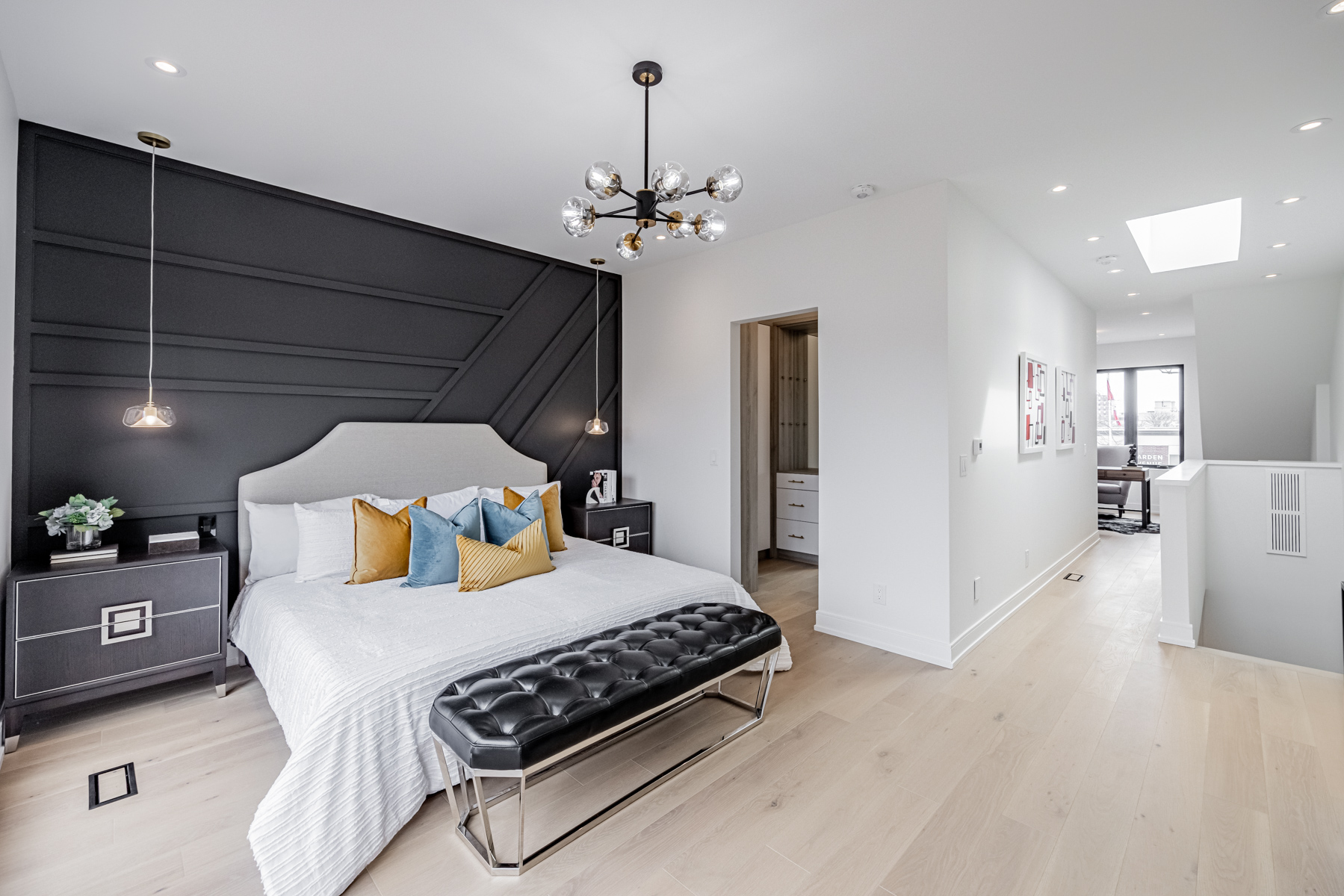 The original basement had low ceilings, but was dug out during renovations. The ceiling height is now eight feet. There’s heated flooring throughout the basement: 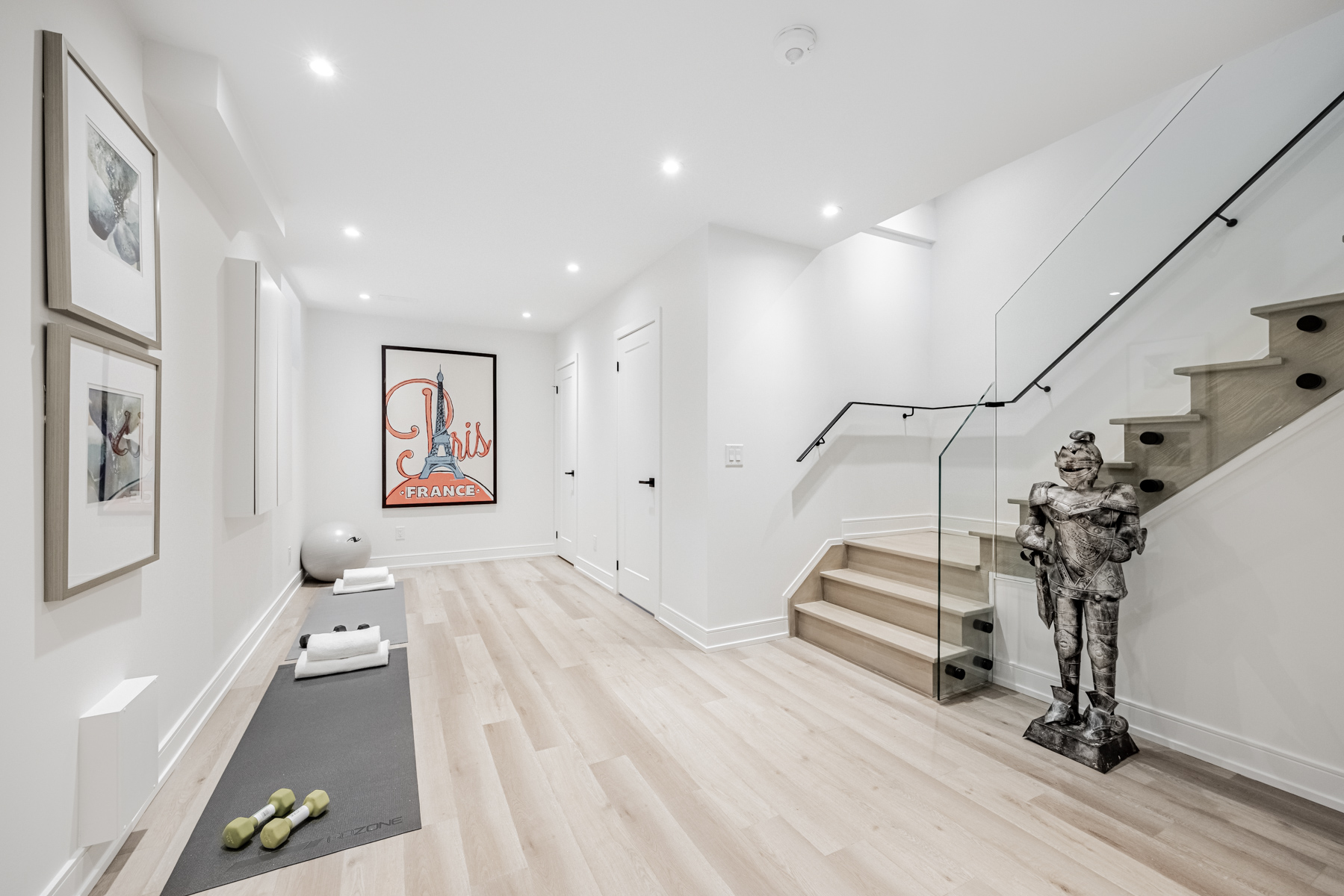 Here’s a full view of the basement level, which is staged as a gym and a rec room: 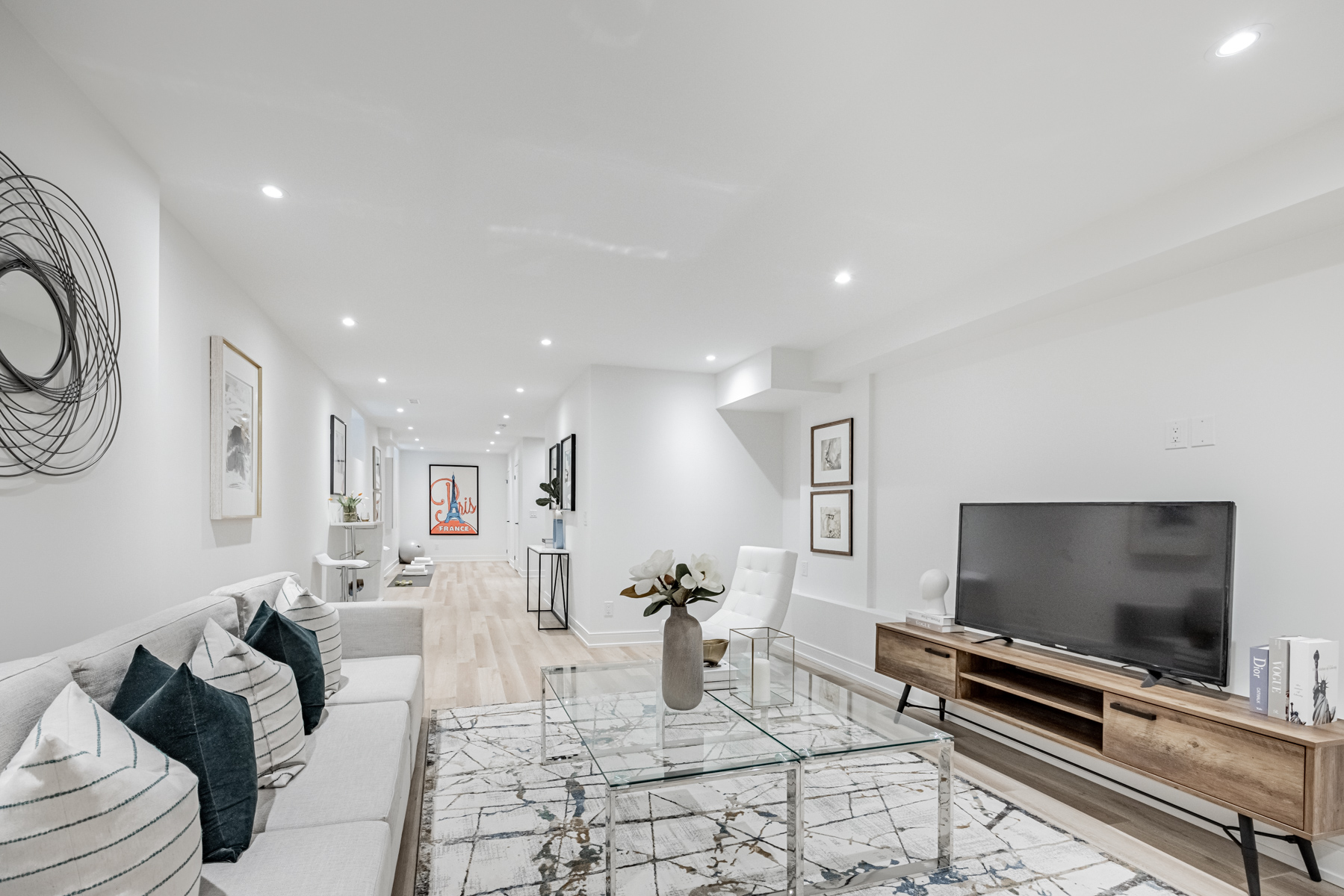 You’ll find a three-piece bathroom in the basement: 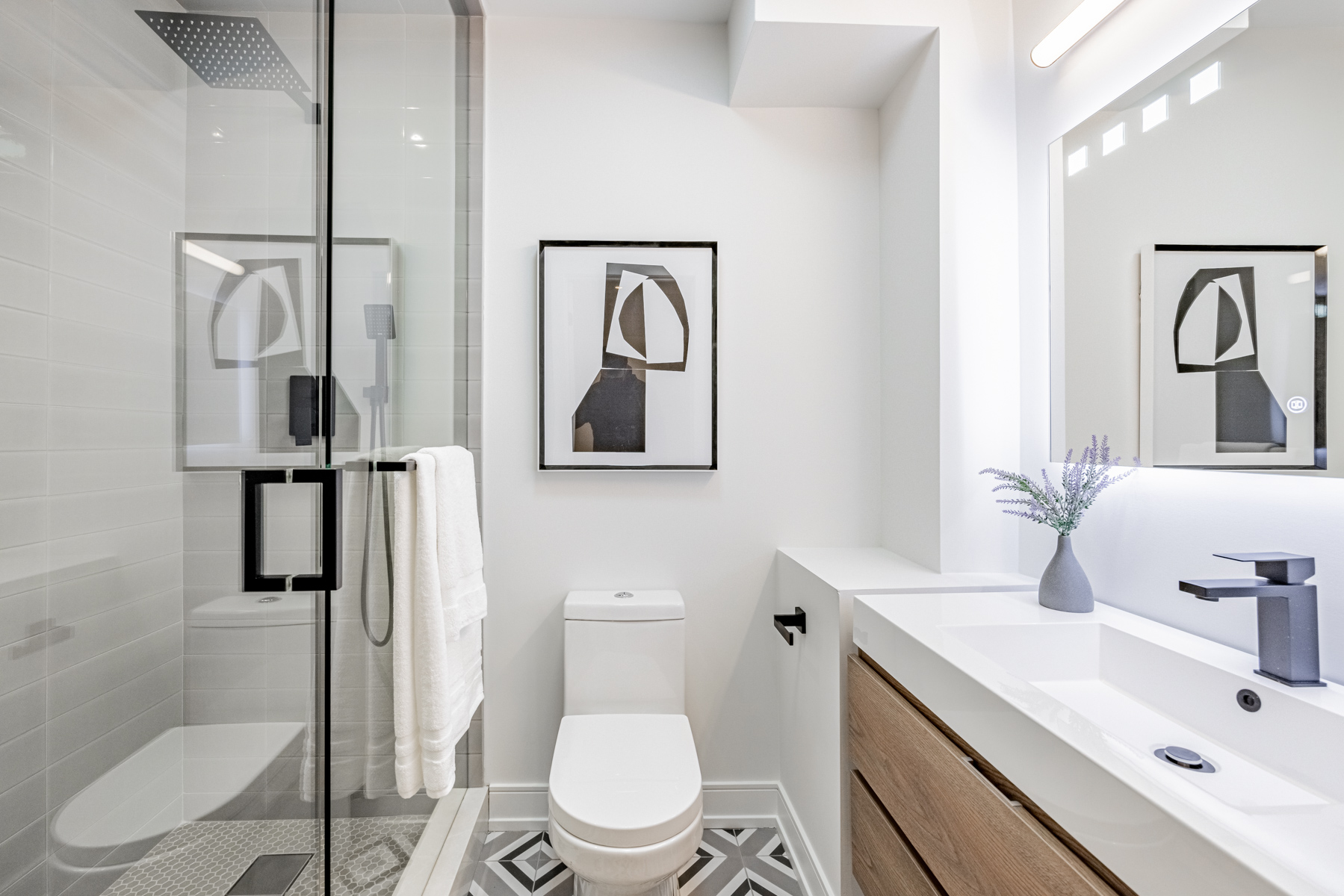 Here’s a look at the back deck, which has privacy walls on either side. Notice the waterproof speakers mounted above the doors. Up top, there’s a third-storey deck, perfect for lounging during the summer. 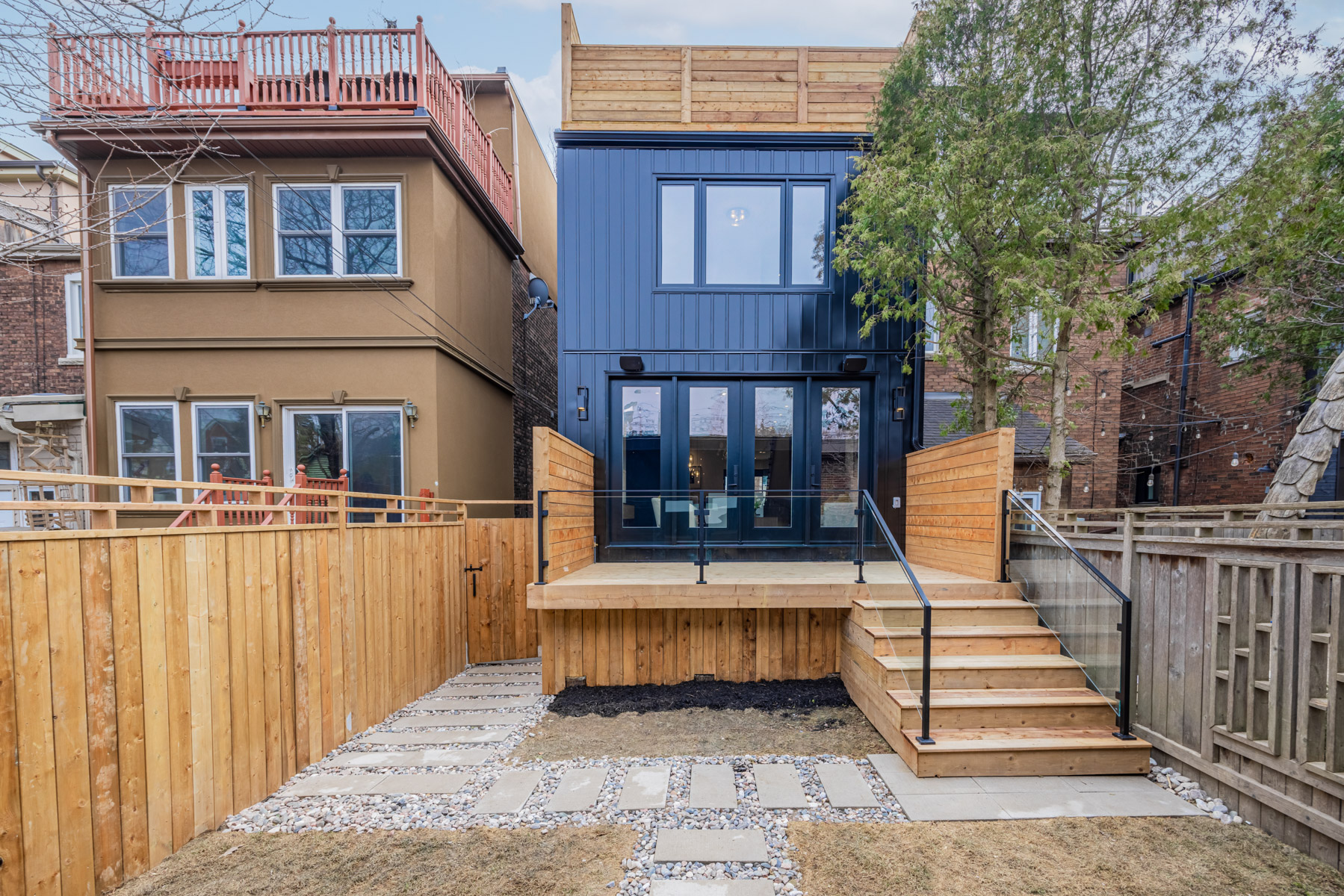 The backyard has double door access to the garage: 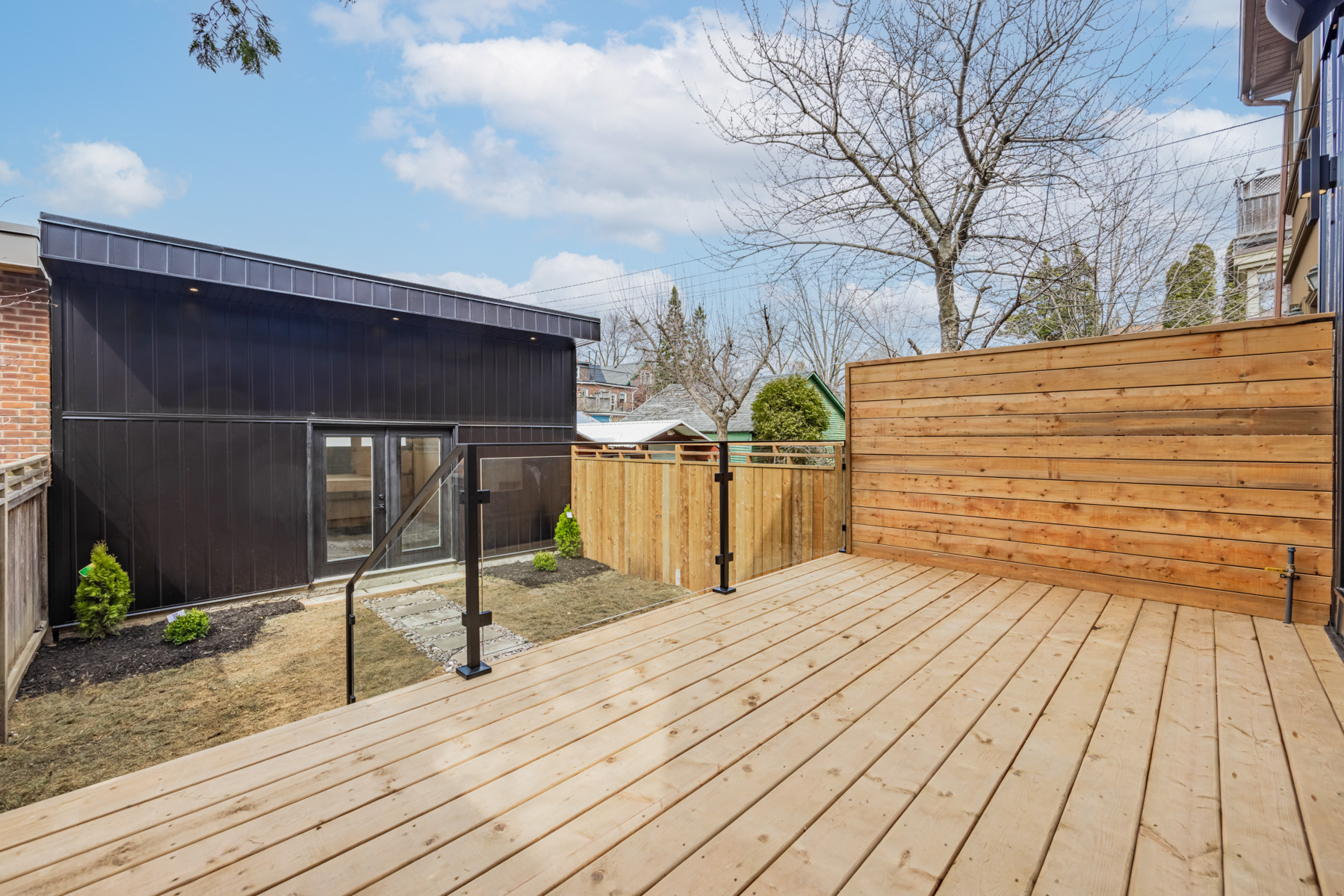 The two-car garage is insulated, with a rough-in for an electric car charging station, a bonus for current or aspiring Tesla owners: 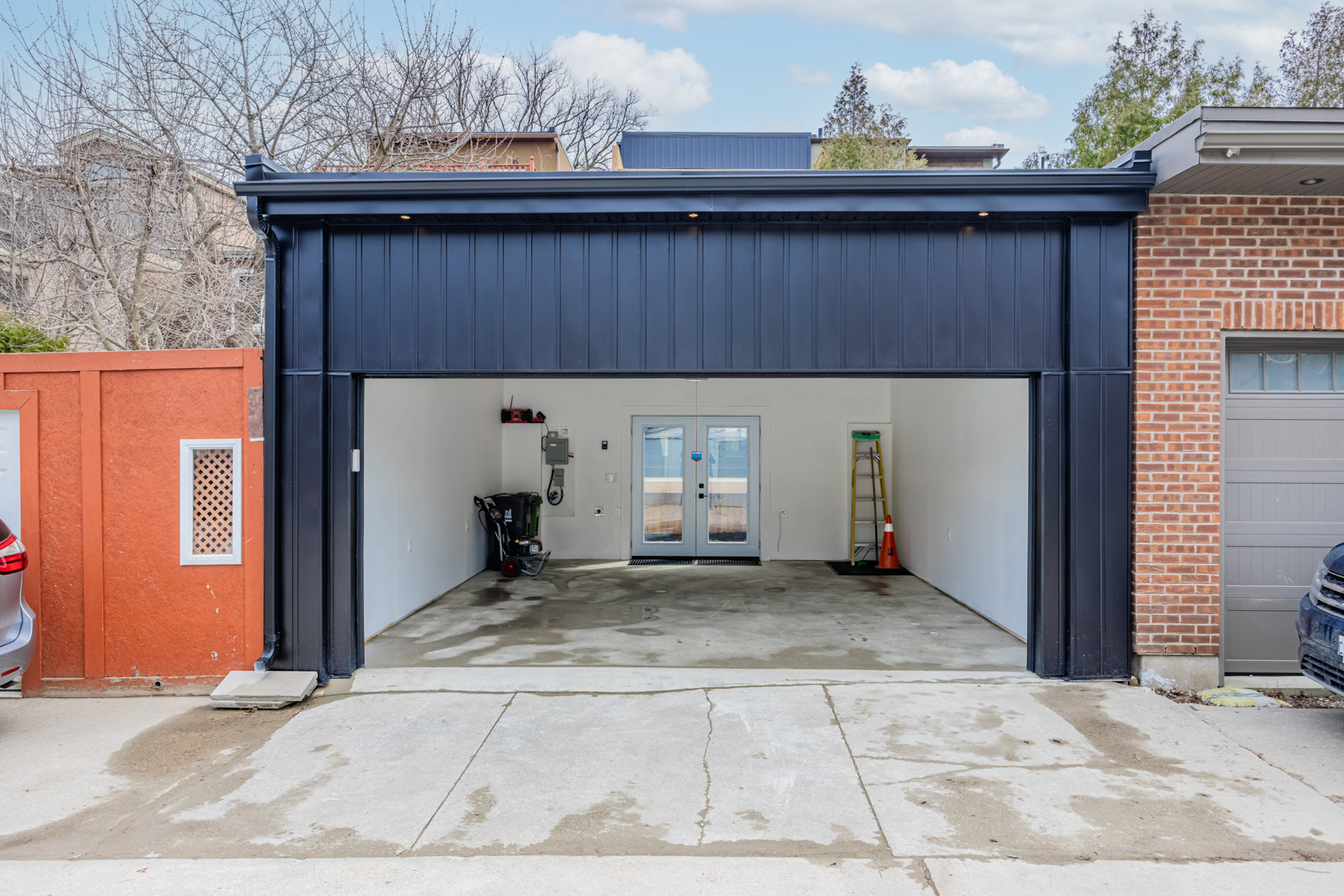