I sold my house before Covid-19. Moving during a pandemic? Total nightmare

I sold my house before Covid-19. Moving during a pandemic? Total nightmare

In 2000, my husband Peter and I moved from Brampton to Georgetown. It’s a town with a population of 42,000 located northwest of Mississauga, where I got hired as an analytical chemist at a pharmaceutical company. We moved into a four-bedroom, three-bathroom house on a secluded cul-de-sac atop a hill, with a balcony that looked out over a lovely forest. It was a bit of a fixer-upper when we bought it, but over the years, we redid the roof, fascia and dormer windows, replaced all the flooring, finished the basement, put in a new deck and landscaped the yard. We really loved living in the area. It’s a little slice of country less than an hour’s drive from Toronto.

In 2016, Peter was offered a job as the vice-president of a biotech company in Charlottetown, Prince Edward Island. We talked about it, and both of us thought it was a great opportunity. Our son had left home for Acadia University in Nova Scotia, so we were ready to make a change. There was just one problem: I’ve had some serious health issues, and the waiting list for a family doctor in P.E.I. is 12,000 people long.

Having quick access to health care is critical for me, so we decided to get on the list, and while we waited, I’d split my time between Ontario and P.E.I. We’re still waiting. Our long-distance marriage has been both challenging and enjoyable. When we see each other after a month apart, it feels like we haven’t seen each other in ages. It’s almost like we’re dating again.

In late 2019, after careful consideration, we decided to sell our house in Georgetown. It’s a lot of property for one person to maintain. In the winter, I’m stuck shovelling heaps of snow. And in the summer, I’m revving the chainsaw, cutting down branches and mowing the lawn. My son now works as a kinesiologist in Nova Scotia, so I’m the only one here. The upkeep is incredibly difficult without any help.

We never really took many vacations while my son was growing up, so I planned to sell before March break then head somewhere warm like Aruba and hit the beach for a bit. After that, I figured I’d rent a townhouse in Georgetown and continue to go back and forth between Ontario and P.E.I. until I could find a family doctor out east.

The plan seemed to go perfectly at first. In November 2019, we listed the house for $1,069,000 and garnered plenty of interest, even though it was winter, a time when the market cools considerably. We had more than 50 private showings. I spent every weekend, for about four months, fluffing the cushions then going out for coffee while strangers viewed the place. We had a few offers, but we waited until we got the right price, along with a longer closing period so I could pack up everything that had accumulated in the house over the last 20 years.

In January, with the house still on the market, I remember hearing the word “coronavirus” for the first time. I was listening to the radio in the car and the news came on. I didn’t think much about it. I guess I thought it would be like SARS: something serious, but contained.

We ended up with two serious offers. The first wanted to close before the end of January. That wasn’t going to work, so we accepted a slightly lower offer of $1,038,000 with a closing date of April 27. At that point, the virus still seemed far away. If I’d known then what I know now, would I have accepted the quicker closing date? Definitely.

We exchanged contracts on March 2, when the Covid-19 situation was relatively calm in Ontario. It was bittersweet, knowing I’d have to say goodbye to a home full of memories. The realization that the virus would affect our plans came a week later. I heard on the news that people were panic-buying food and toilet paper at grocery stores. I didn’t think I’d ever see that happen in Canada, a country with first-world infrastructure and plentiful resources. I felt like I’d missed the memo. 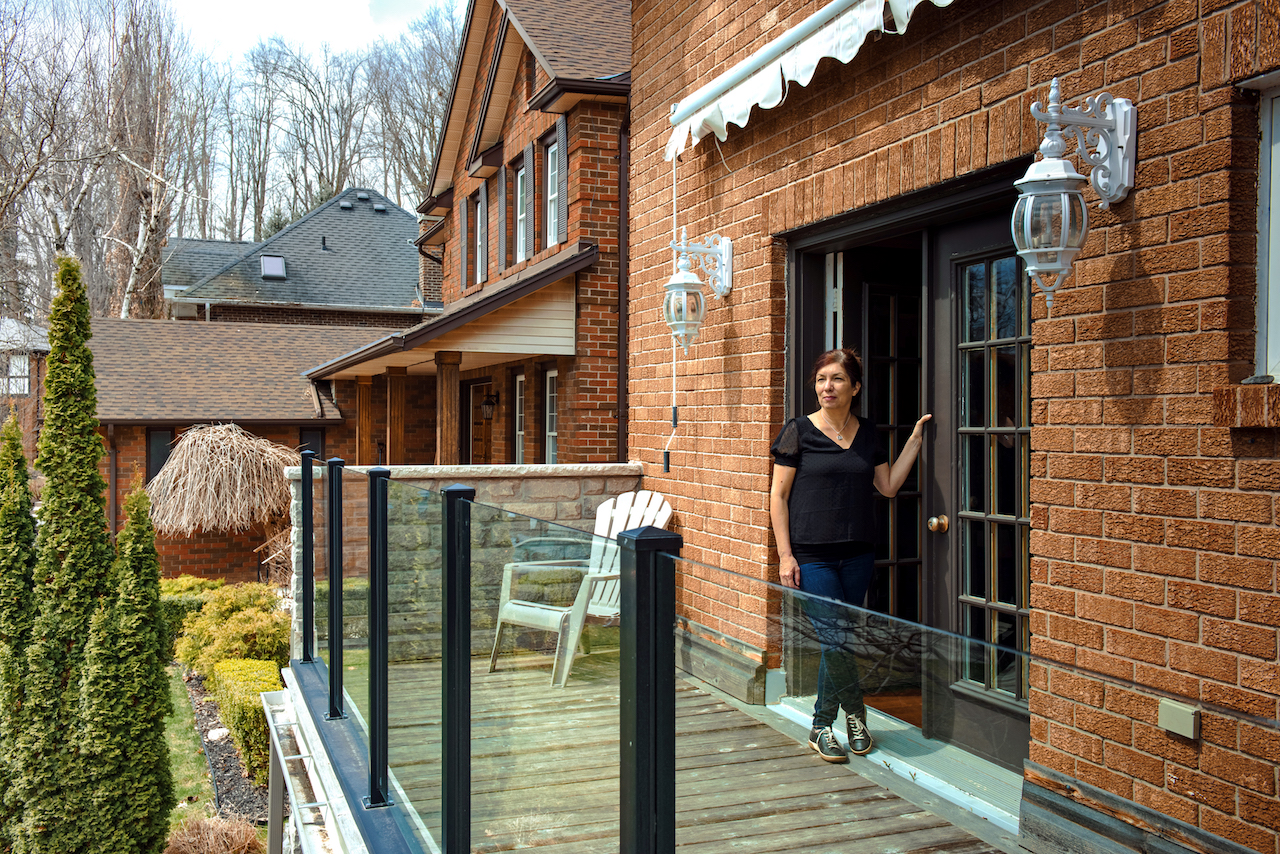 That’s when I started to scramble. What if our buyers didn’t close? Would I be able to get to P.E.I. to see Peter? Would it be possible to arrange for junk removal? There were so many questions and no clear answers. On March 13, the government advised against all non-essential travel, so going south for a vacation was no longer an option. Thankfully, I hadn’t booked flights or accommodations.

That was the least of my problems, though. It became clear that my idea of renting a townhouse wouldn’t work. There was nothing on the market. I woke up at 4 a.m. every day to look at Kijiji and Rentals.ca, but it felt hopeless. I guess nobody wanted to risk having a stranger in their house. I expanded my search to the rest of Ontario and found a short-term rental in the Niagara region. The owners accepted my $6,000 deposit and then cancelled the reservation without issuing a refund. I’ve emailed and called, but they’ve gone quiet. I’m trying to work with the booking website to get the money back.

I also needed to clear out the house. The cupboards were full of clothing, old dishes and board games, among other miscellaneous items from the past two decades. I was going to give away at least half of it; the rest I’d send out east or put in storage. I hired junk removers to take the heavy pieces of furniture in March, but otherwise, I’ve been loading everything into my SUV and driving it into town. I’ve been treating my car like a moving van.

A lot of services were closing, too. It became a race against time. I had to get clothing to the Salvation Army before it closed down on March 17. Then I had to get everything else to Goodwill, which closed a couple of days later. It’s hard to buy boxes and moving supplies, because the stores in town are closed. Even storage was a problem: the only unit I could find was a tiny 10-by-15-foot shed north of Georgetown. I lugged a bunch of furniture onto the street for the council collection, only to be told that they’d cancelled pickups for the next few weeks. All the lifting has left me physically drained.

Of course, I would love to go to P.E.I. to be with Peter, but it’s not that easy. First, I still don’t have health care in P.E.I. That’s a huge problem given my health issues. Second, I’d rather not get on an airplane right now, considering airports were ground zero for the transmission of the virus. The other option: driving 17 hours from Georgetown to Charlottetown all by myself. But it’s not clear how many rest stops and motels would be open along the way. I’d rather not drive through the night, either. What if I hit black ice in New Brunswick?

Even if I did manage to get there, I’d have to quarantine for 14 days in a different part of the house to protect Peter. He’s an essential worker because his company makes medication and hand sanitizer.

The latest challenge is that the buyers would like to exercise the right of re-inspection they included in the contract. I think they just want to make sure we haven’t switched the appliances or made any drastic changes to the place, but bringing new people into the house doesn’t seem like a good idea for health reasons. The Ontario Real Estate Association says face-to-face transactions are a bad idea, but there’s no specific guidance on inspection clauses. Right now, I’m talking to my agent and trying to negotiate an inspection via FaceTime. That would be a good compromise. I think we are going to close, but if we don’t, I guess I’ll move back into the house. I’m not going to try to sell again. I’m too tired for that.

The only things left to move are a few boxes, along with my bed and TV. I called a local junk removal company and they quoted me $1,200 to clear them out, which is ridiculous. I wouldn’t pay that much even if I was a millionaire, so I’ll work out a way to do it myself. I’ve just found an Airbnb in Alliston, and they’ve accepted my reservation, so it looks like I’ll be staying there for a bit. I’m just praying I don’t have a repeat of the Niagara situation. Otherwise, I’ll be staying in a hotel.

I try to remember that I’m not the only one going through tough times. Everyone has a story right now. It’s been hard, but I’m trying to laugh. When I leave the house on April 27, it’s going to feel like the end of an action movie, with me walking into the sunset, leaving everything behind me in flames.

–As told to Alex McClintock