In early 2020, Jelena lived with a couple of friends in a spacious three-bedroom apartment at Yonge and St. Clair. When the landlord tried to raise the rent five per cent, they all decided to move elsewhere. With a budget of $1,300 a month, Jelena started looking at studios, one-bedrooms and basement apartments across the city, everywhere from Dufferin Grove to East Danforth. But after an extended search, she came up empty.

Then she found a studio apartment inside a three-storey row house in Moss Park. It was only 150 square feet, less than half the size of the other apartments she’d seen, but the $1,000-a-month rent would leave Jelena with enough cash each month to slowly pay back her student loans. Plus, the apartment was only a 20-minute walk from the café at University and Dundas where she works. After the landlord agreed to let her make some basic upgrades, like building shelving and a makeshift closet, Jelena signed the lease.

She moved in on March 1, a couple of weeks before the entire city went on lockdown because of Covid-19. Now, Jelena’s holed up in a unit that’s the size of her bedroom at Yonge and St. Clair. “The worst part is not being able to move around,” she says. “At least in my old apartment, I could wander from room to room.” Jelena’s kitchen consists of a mini-fridge and induction stovetop. There’s no sink. Because she isn’t much of a cook, Jelena usually eats instant noodles, pasta and hot takeout from Loblaws.

Being stuck in 150 square feet for most of the day would drive the average person bonkers. Thankfully, Jelena can break up the days with shifts at the café, which was deemed essential because it serves the Ontario Public Health employees and hospital staff that work nearby.

The entrance opens directly into the unit. After she moved in, Jelena’s dad helped her paint the walls and kitchen cabinets: 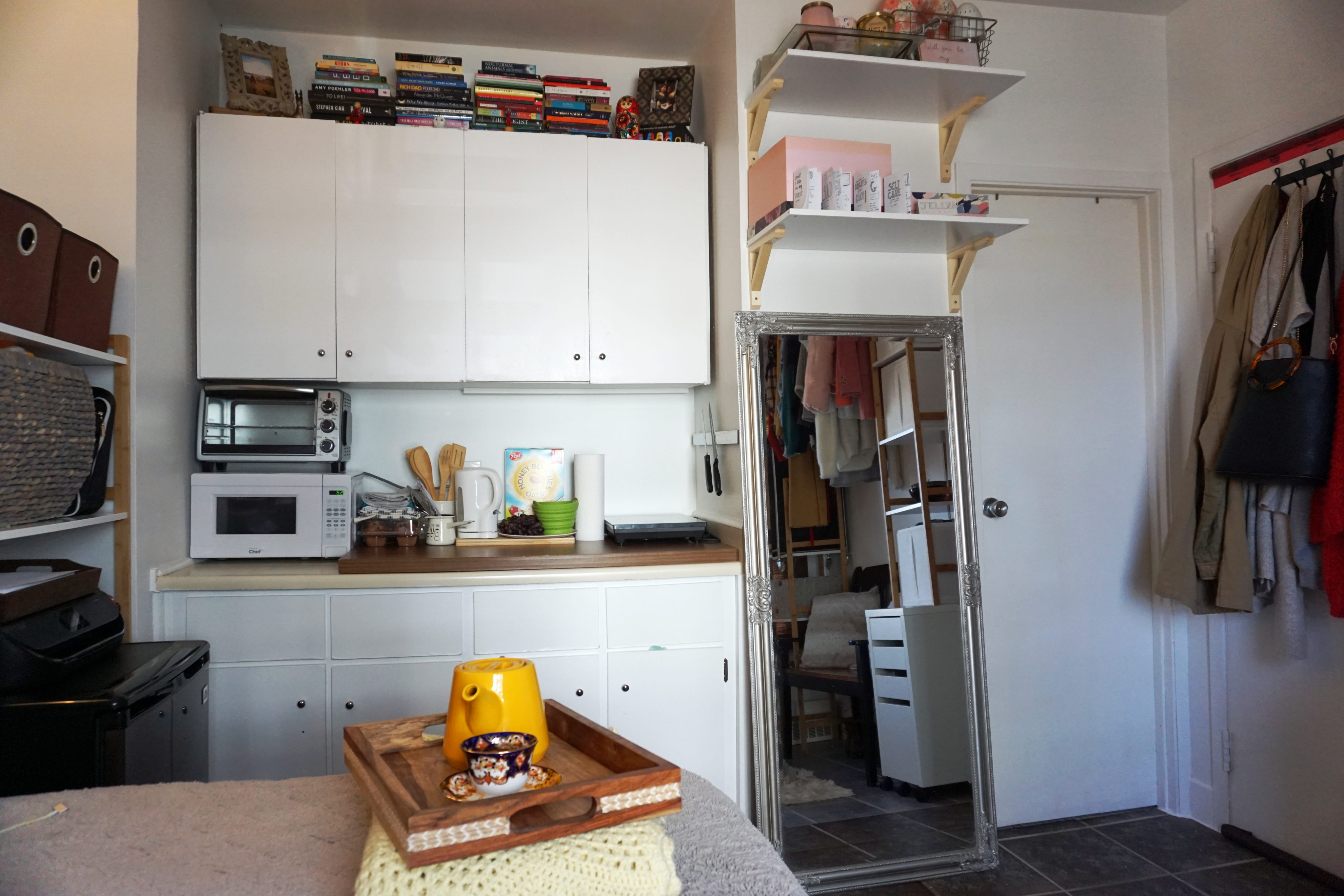 To free up counter space, Jelena stacks her toaster oven on top of the microwave. She boils the water for her instant noodles in the kettle and uses the induction stovetop to make pasta dishes: 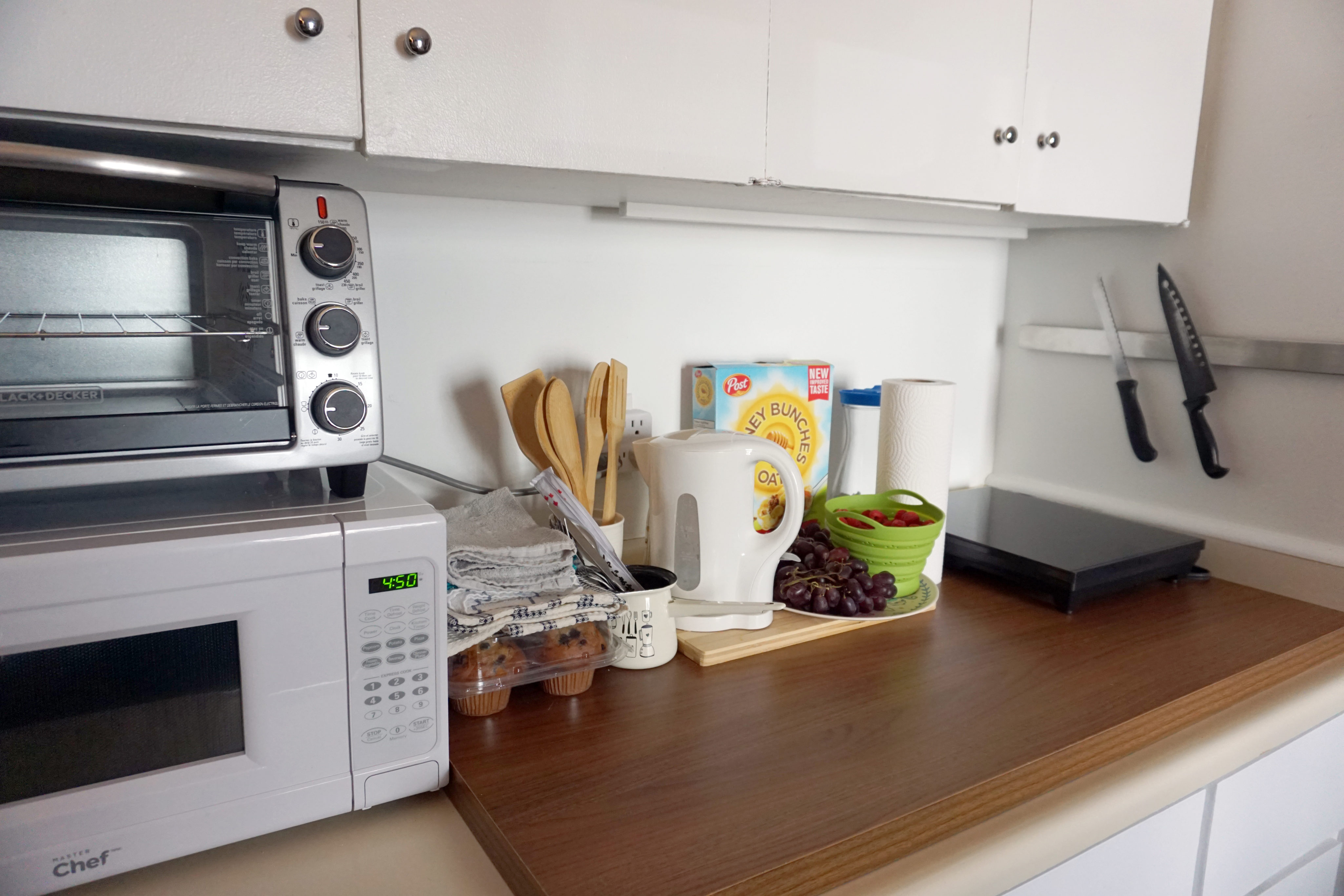 Here’s the view from the front door. Jelena took the lower shelves out of an Ikea storage unit to make room for her mini-fridge: 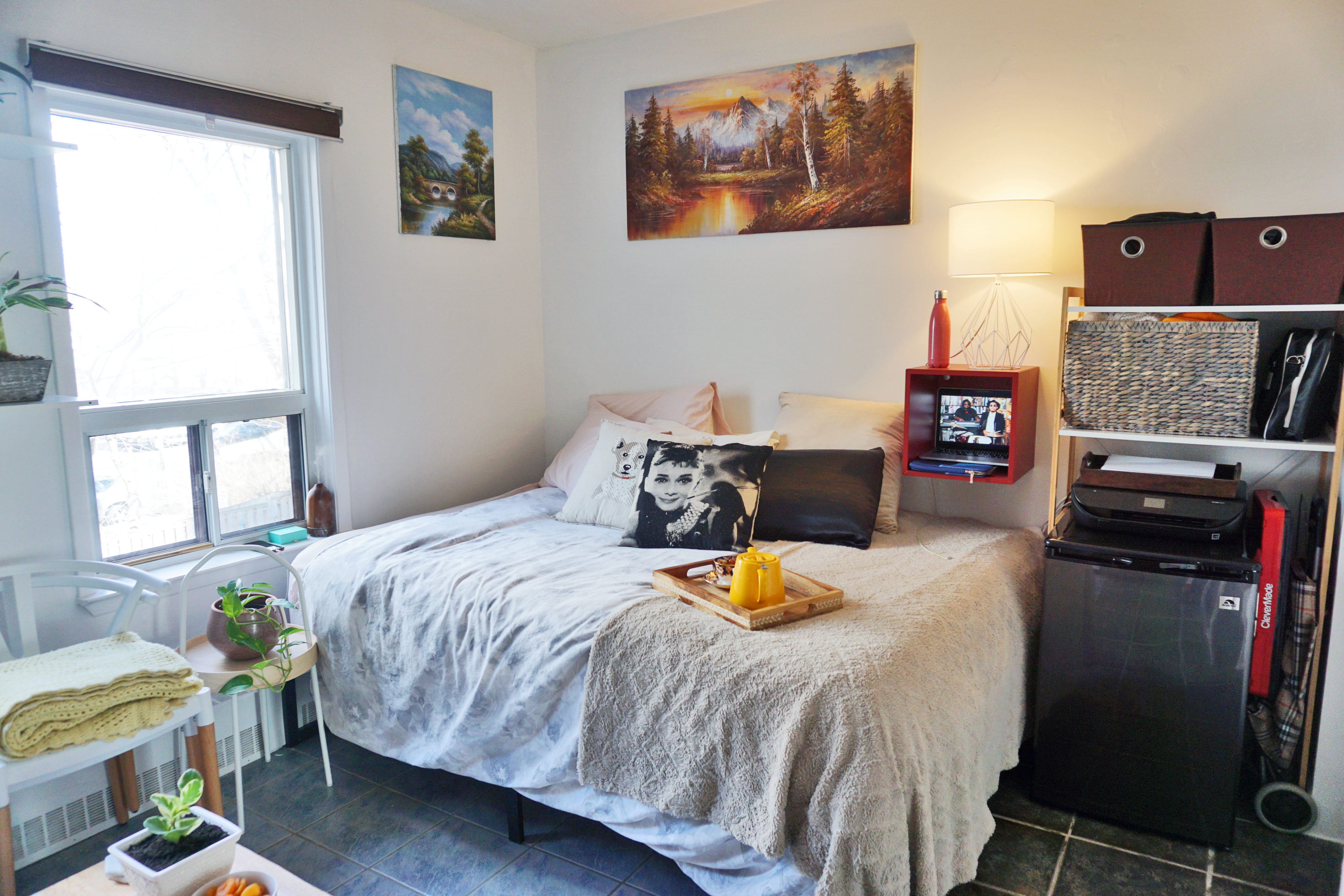 The mini-fridge used to be at the foot of the bed, but Jelena wanted it to be closer to the kitchen. For additional storage, her father mounted a shelf above the mirror: 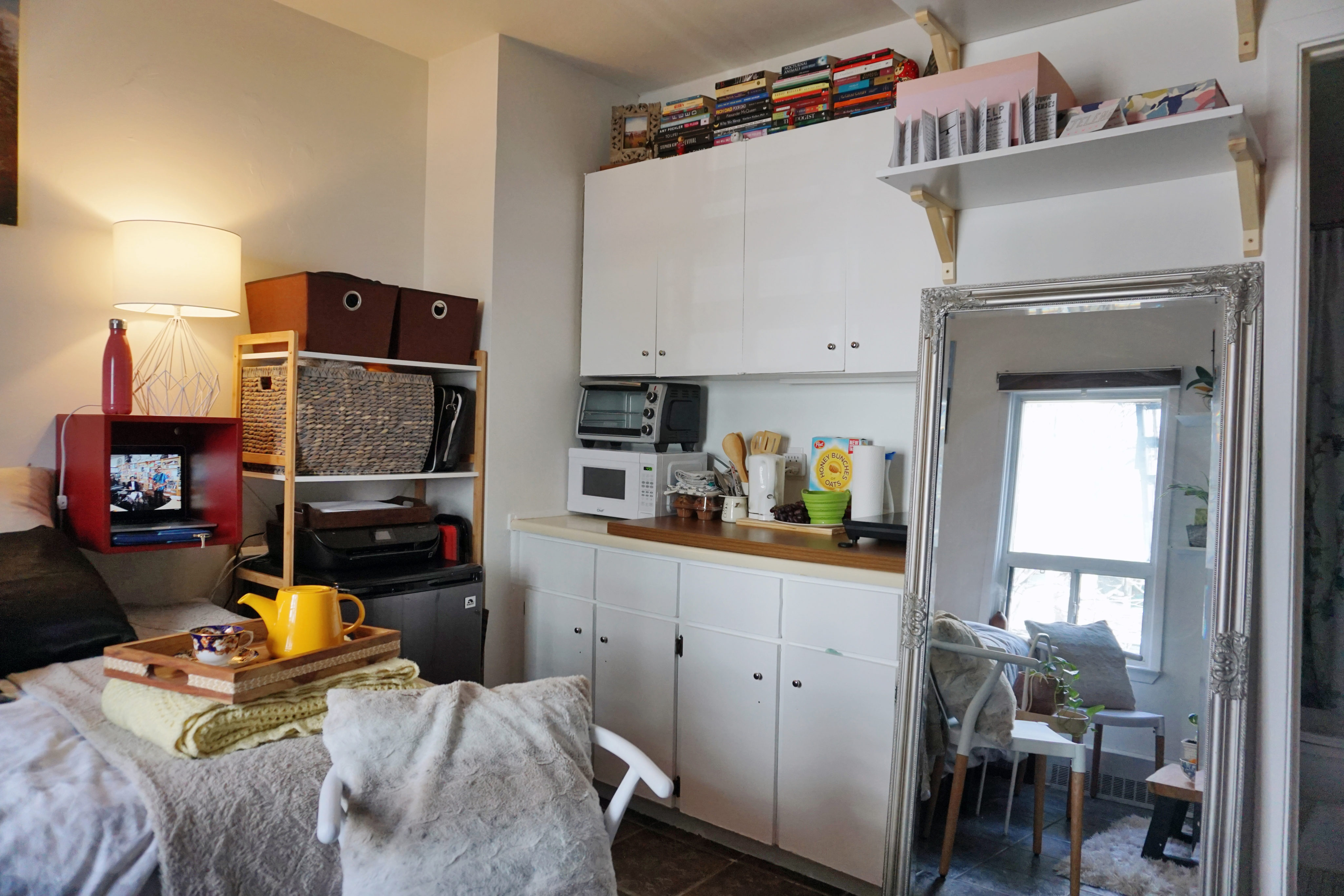 Jelena eats most of her meals off a wooden tray while sitting on her queen-sized bed. Instead of taking up space with a side table, she stows her bedside items in an old wooden box that’s attached to the wall. 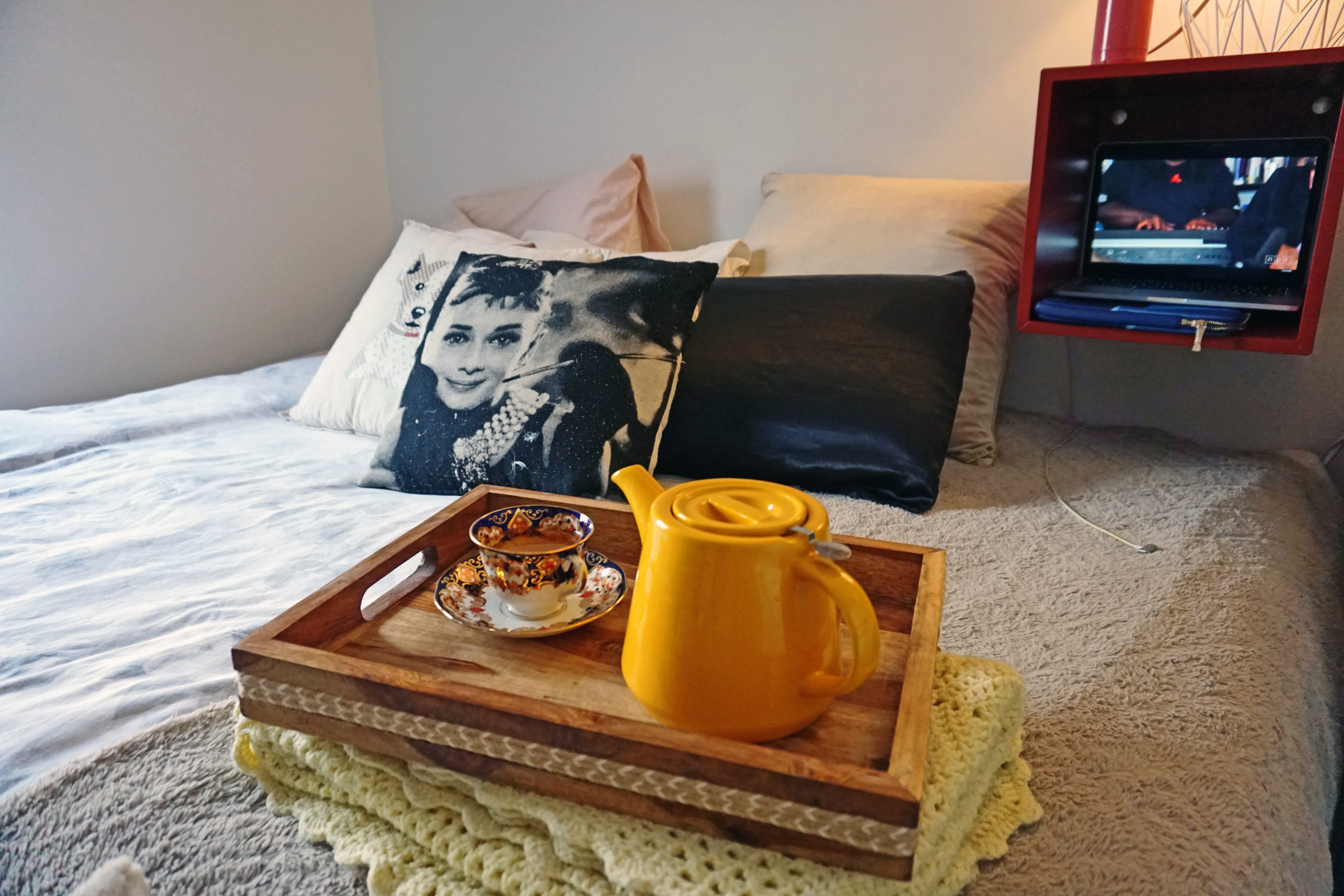 There’s no closet, so Jelena and her dad installed a rod on the ceiling, from which she hangs her clothing. She bought a wooden bench on Facebook Marketplace for $30. It functions as the centrepiece for her tiny seating area: 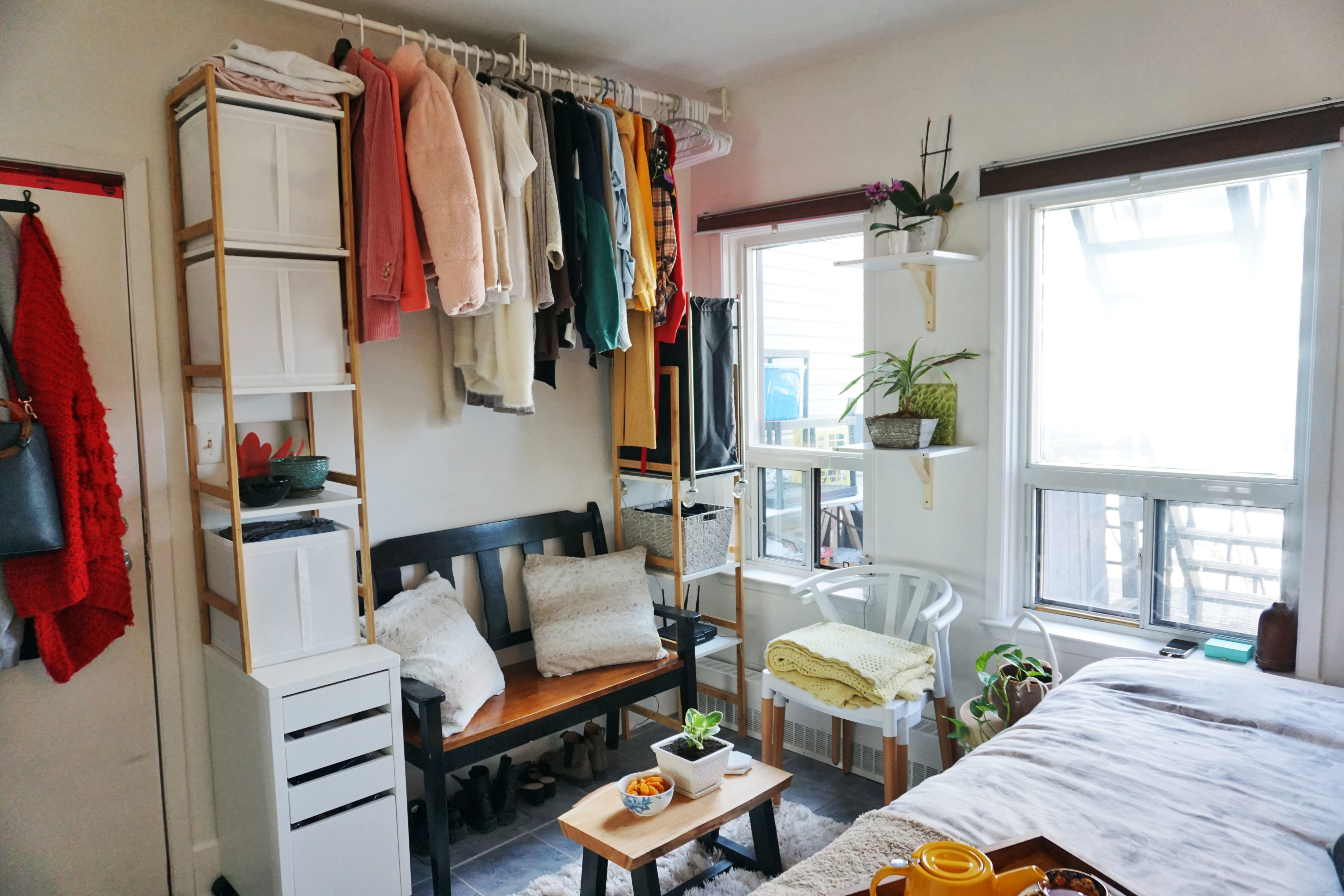 Jelena washes all her dishes in the bathroom sink. Her father recently made a bigger, deeper sink that they’ll install when lockdown measures are lifted: 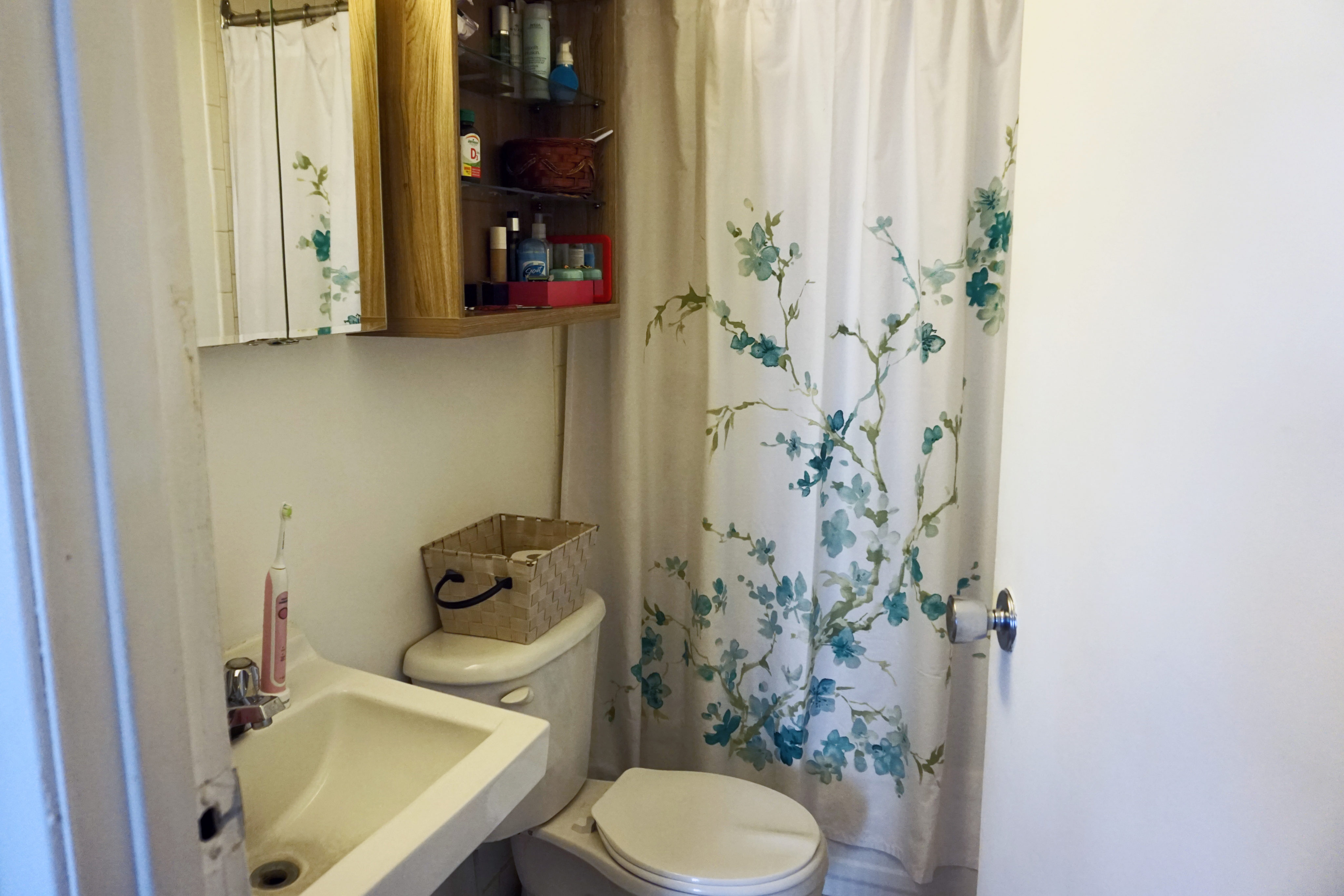 Are you self-isolating in a tiny place? We want to talk to you.