House of the Week: This former hoarder’s home nearly tripled in value after a two-year renovation

House of the Week: This former hoarder’s home nearly tripled in value after a two-year renovation

The revitalization included walnut and travertine finishes, custom interior design and a basement with a rec room 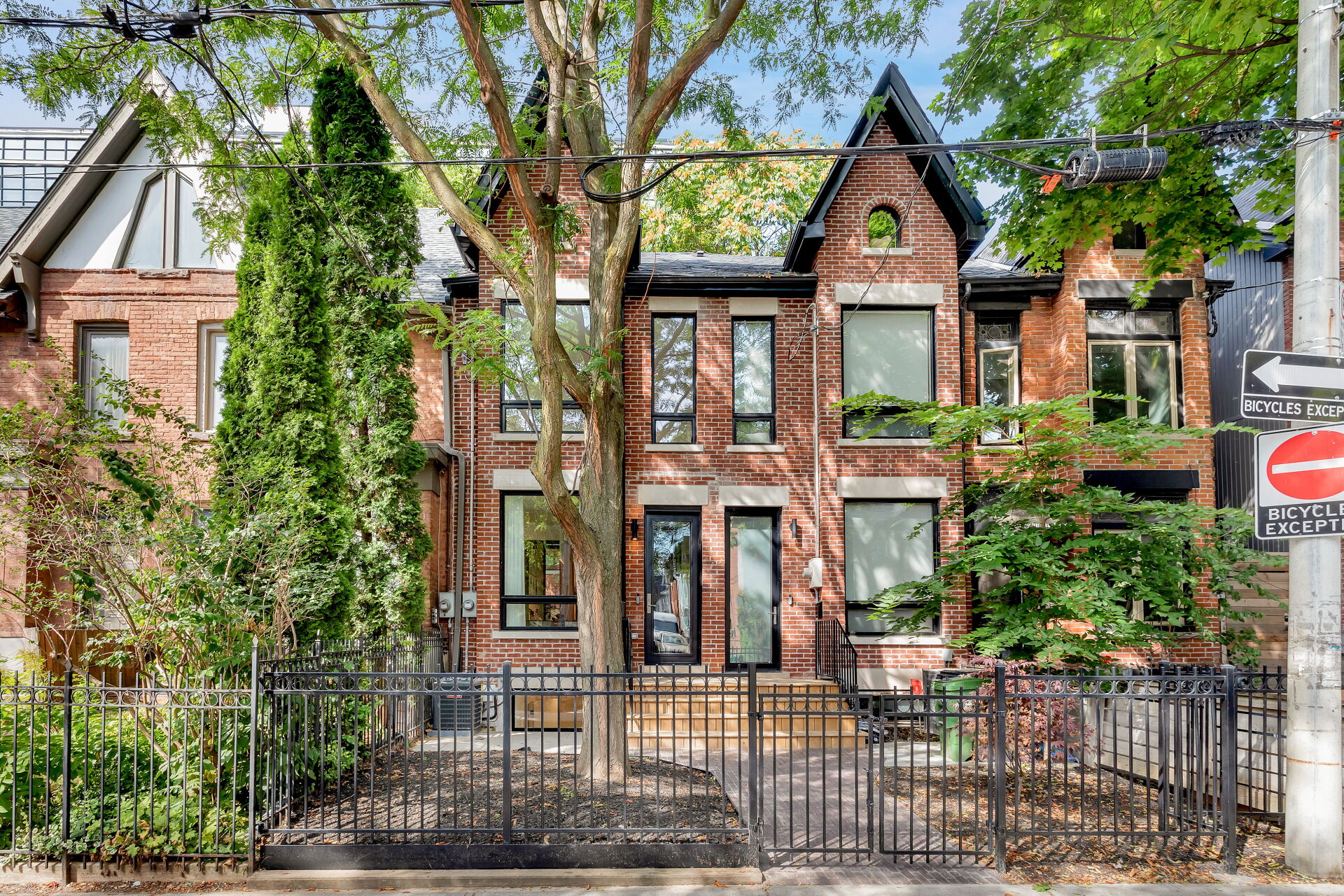 When this Victorian townhome was purchased in 2020, the buyers hadn’t even been inside before closing the deal. “It was a hoarder’s house,” co-buyer Eduardo Pontes recalls. “You weren’t allowed to go into the home to see it. The City of Toronto had people with hazmat suits cleaning it out.”

A nearly two-year renovation followed. The home was gutted to the studs and reframed. The basement was underpinned and expanded, adding two additional rooms. Pontes partnered with Maia Legacy Builders and design firm Ancerl Studio to create this three-plus-one-bed, two-and-a-half-bath home with custom furnishings, built-ins and artwork—all of which are included in the purchase.

The neighbourhood, Corktown, is a mix of singles, young professionals, young families and senior residents. There are new condo projects and recreation facilities just north in Regent Park, the Don Valley and Riverside to the east, the Distillery District to the south, and plenty of bars and restaurants to the west.

A slender front door opens into a foyer and dining area. That brick wall was added during renovations, and the table (with a travertine-marble base), built-in walnut veneer and leather bench are all bespoke. There is heated, polished concrete flooring throughout the main floor. 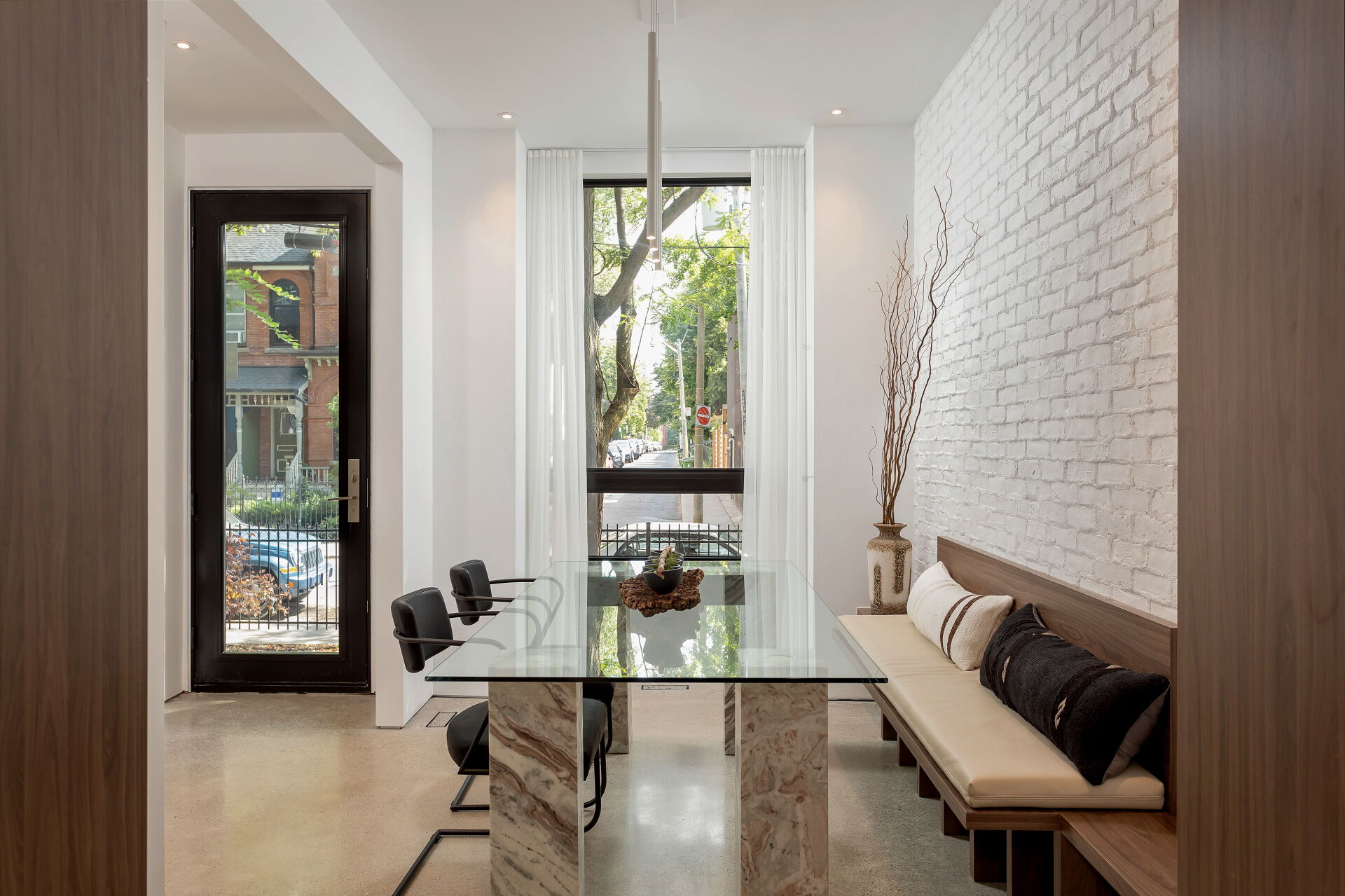 The living room has a Planika ethanol fireplace surrounded by travertine with a built-in, concealed entertainment unit with storage above. The gallery wall over the couch is an original collection from Ancerl Studio. 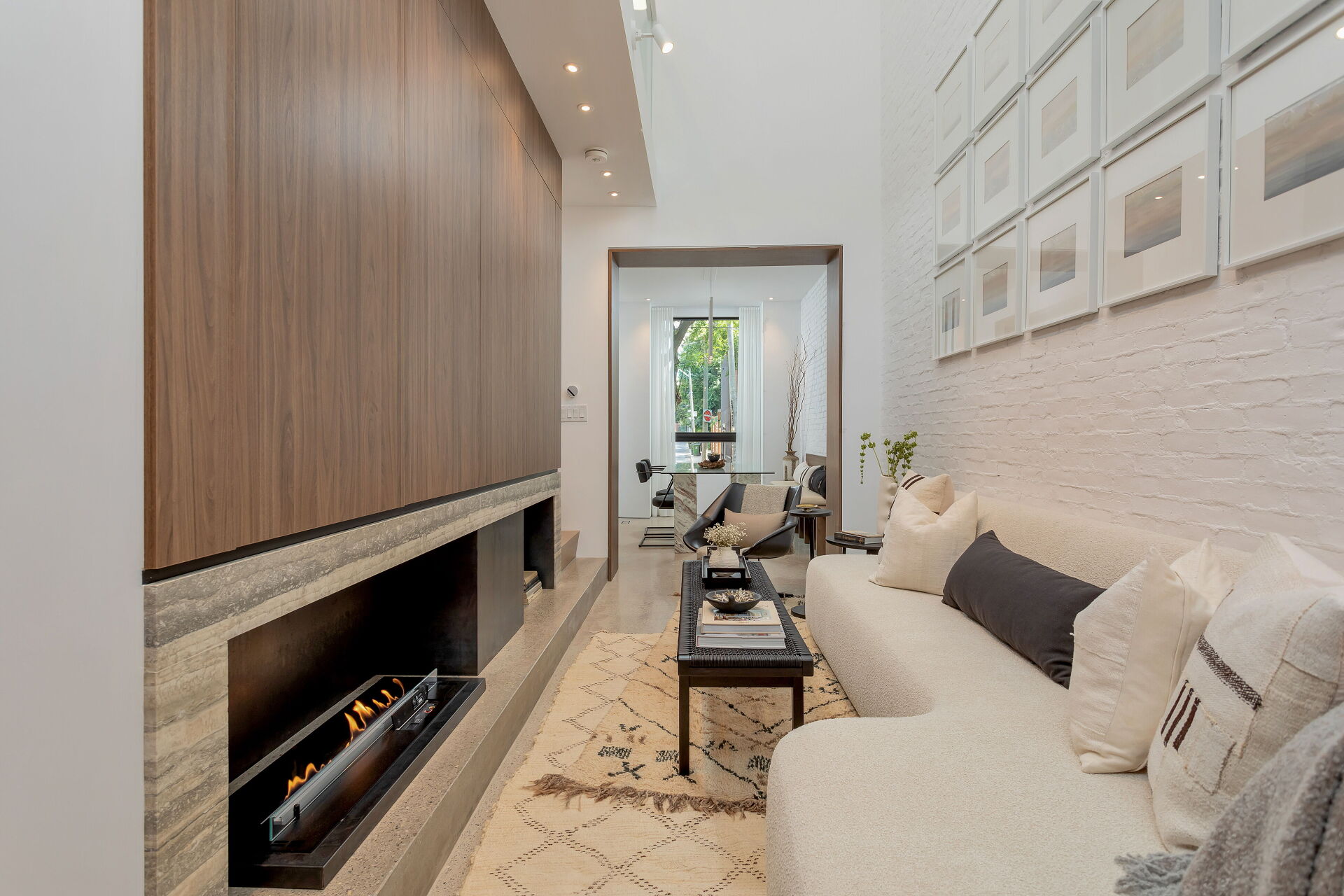 Here’s a reverse view of the living room, with engineered white-oak hardwood stairs as well as a concealed walnut door to the basement stairwell. This room opens above to the second floor. 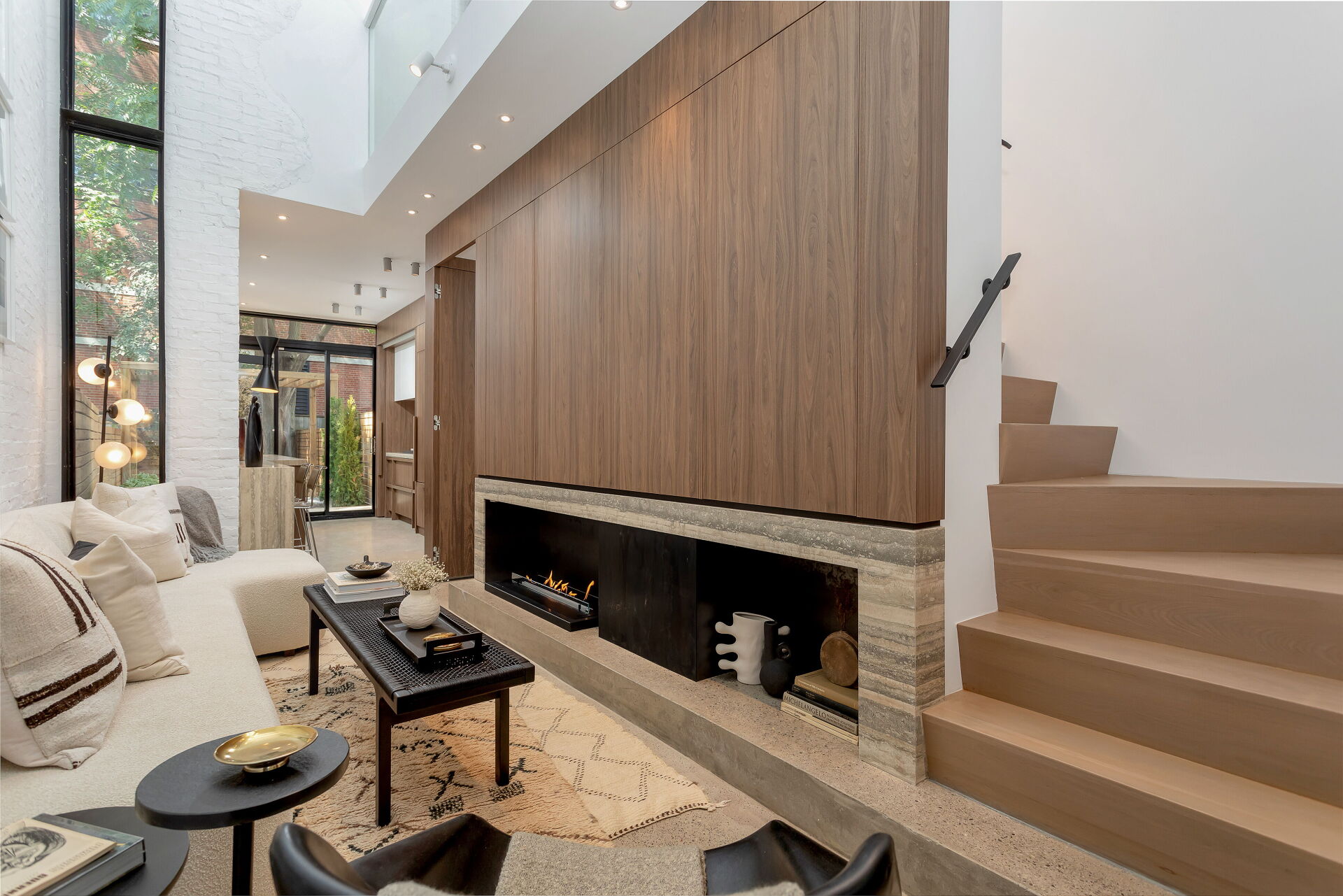 The stone and wood continues in the kitchen, which has three windows encased with elegant displays. 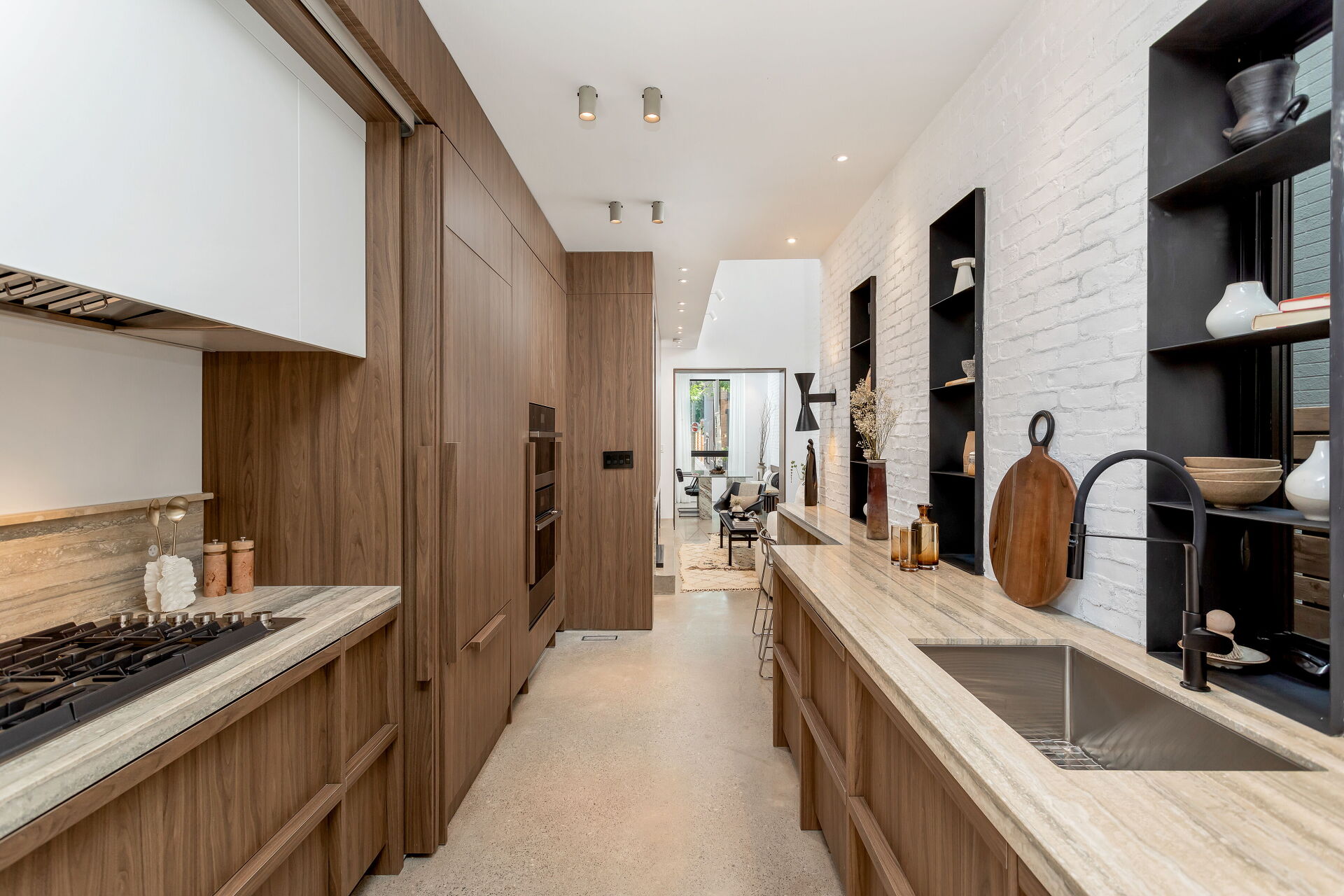 Another view of the kitchen shows JennAir appliances throughout, including a six-burner gas stove. The whole cooking area can be concealed with a sliding walnut panel. The breakfast bar has seating for two, and there’s a sliding-door walkout to the backyard. 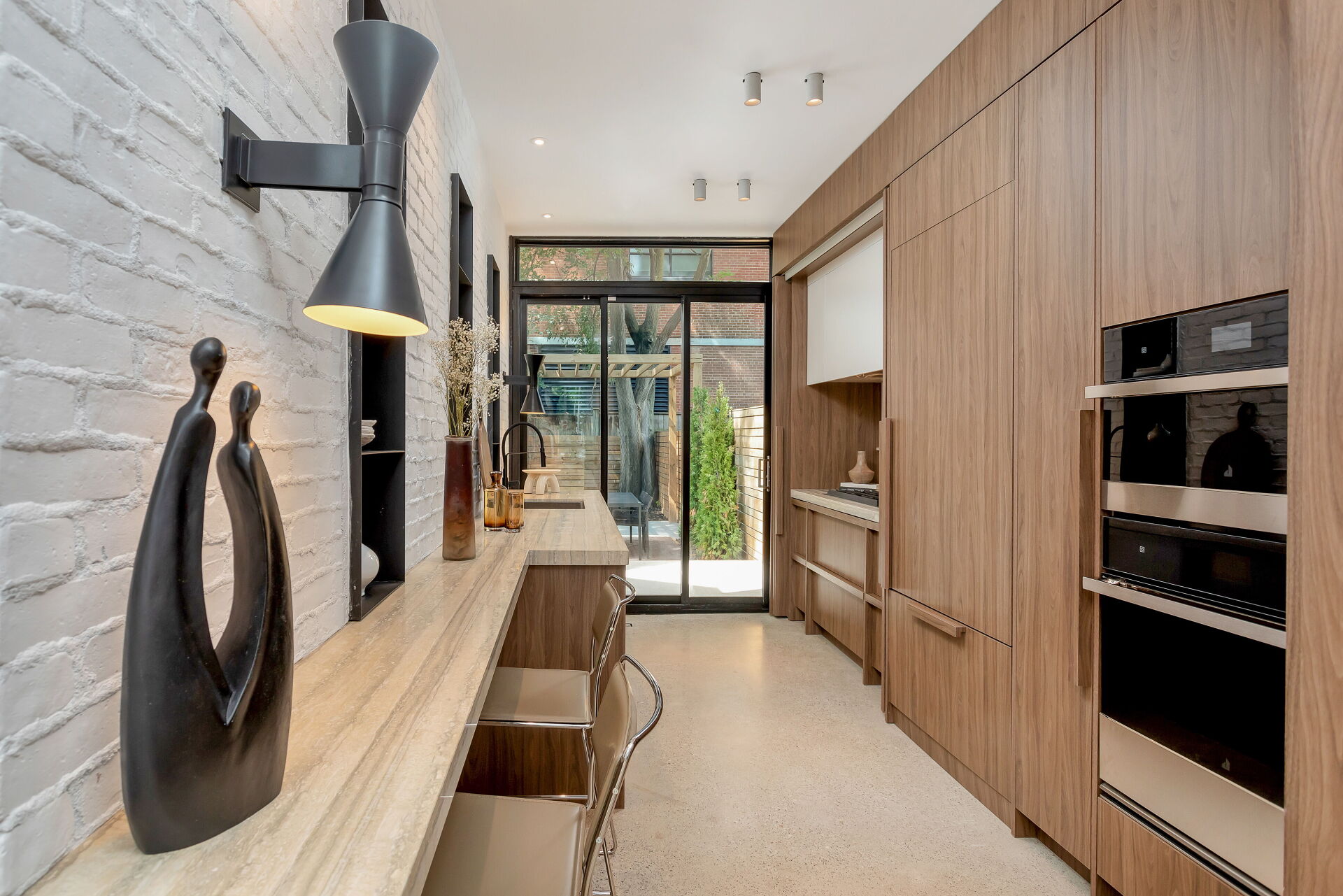 This second-floor catwalk connects two bedrooms on opposite sides of the home. That beam is one of many. “We wrapped them in plastic during the renovation so they aged faster,” Pontes explains. “Once unwrapped, they looked like they were decades old.” 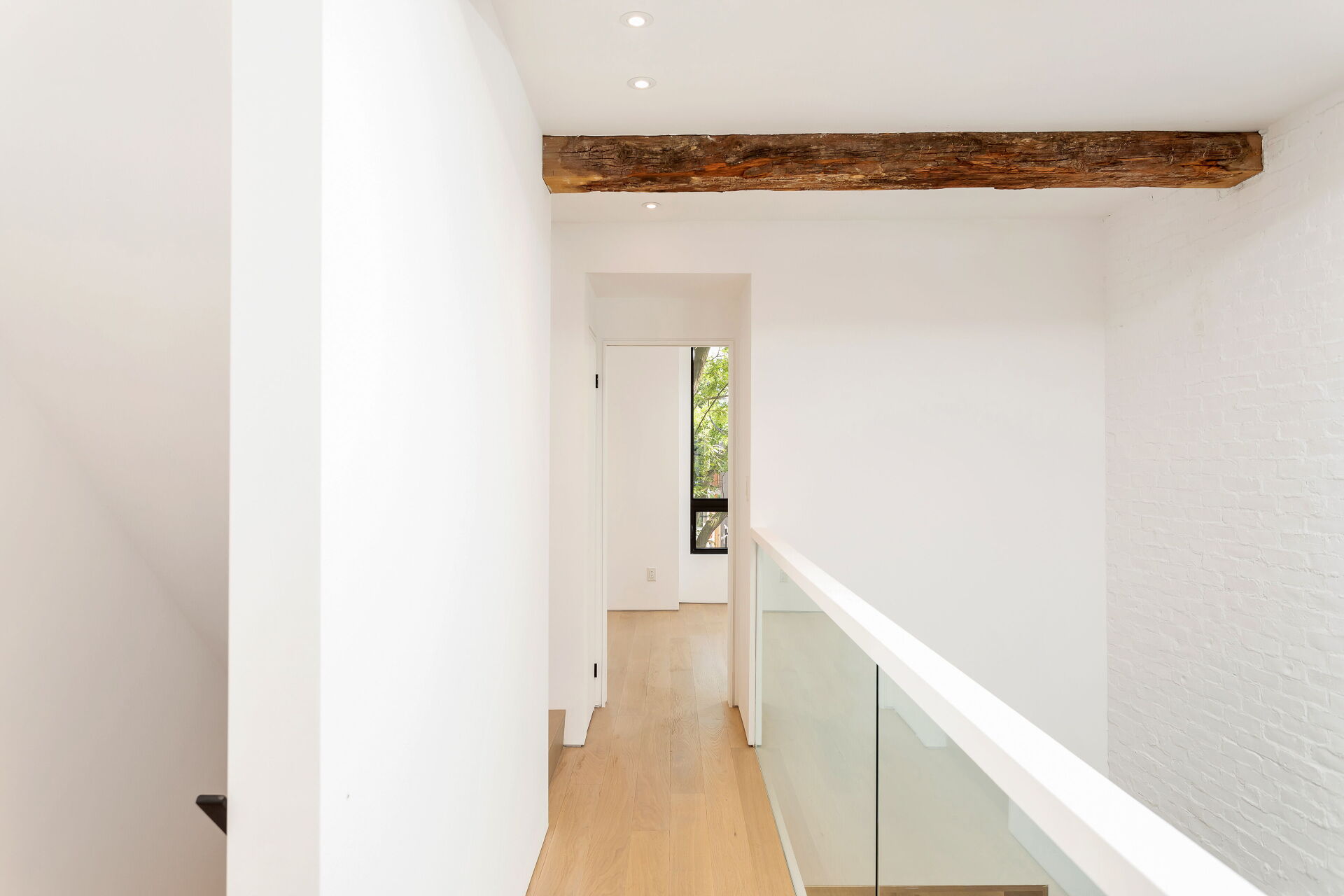 There’s also a bathroom on the second floor with a single vanity. 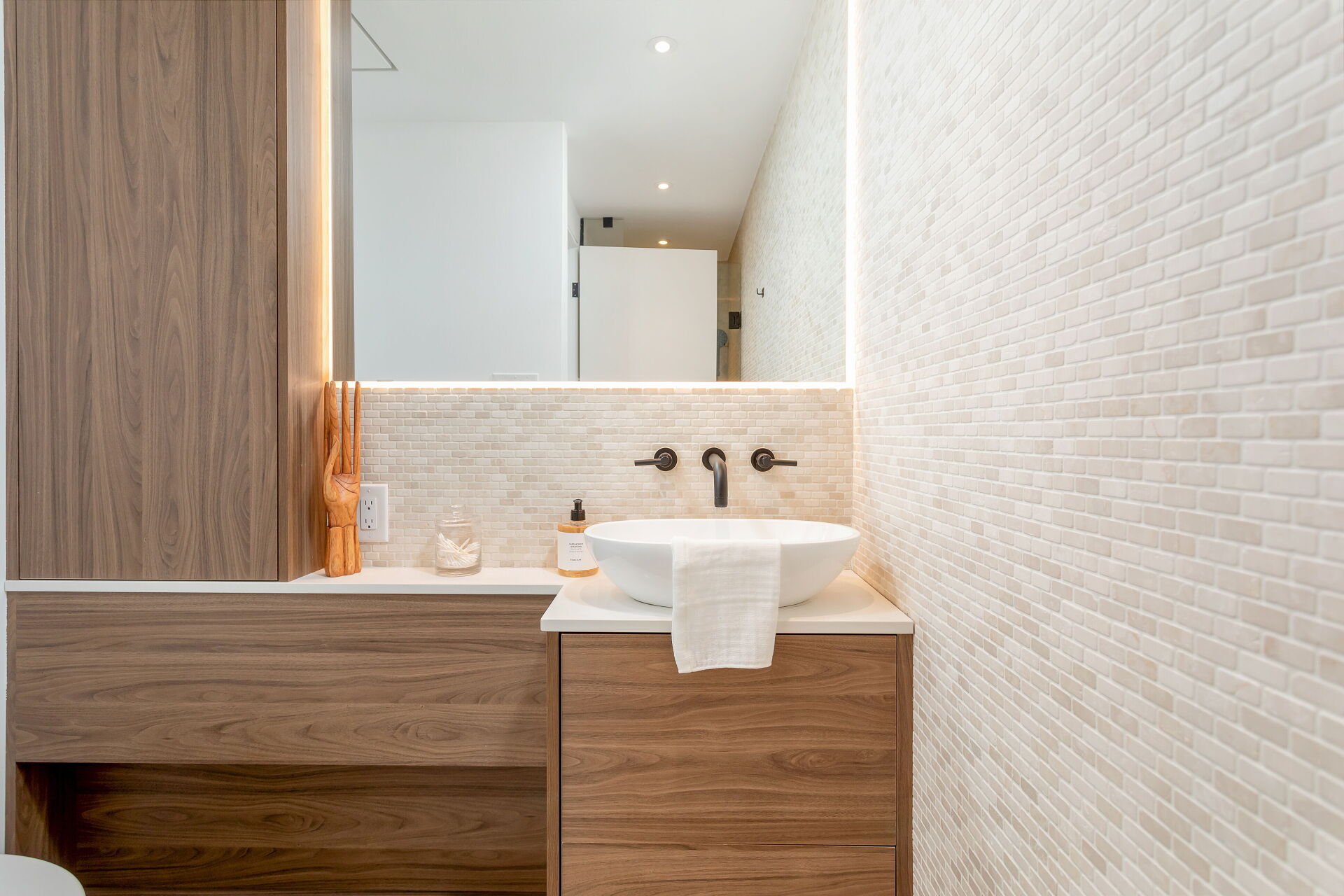 Here’s the second-floor bathroom shower stall. The flooring is made of terrazzo stone tile. 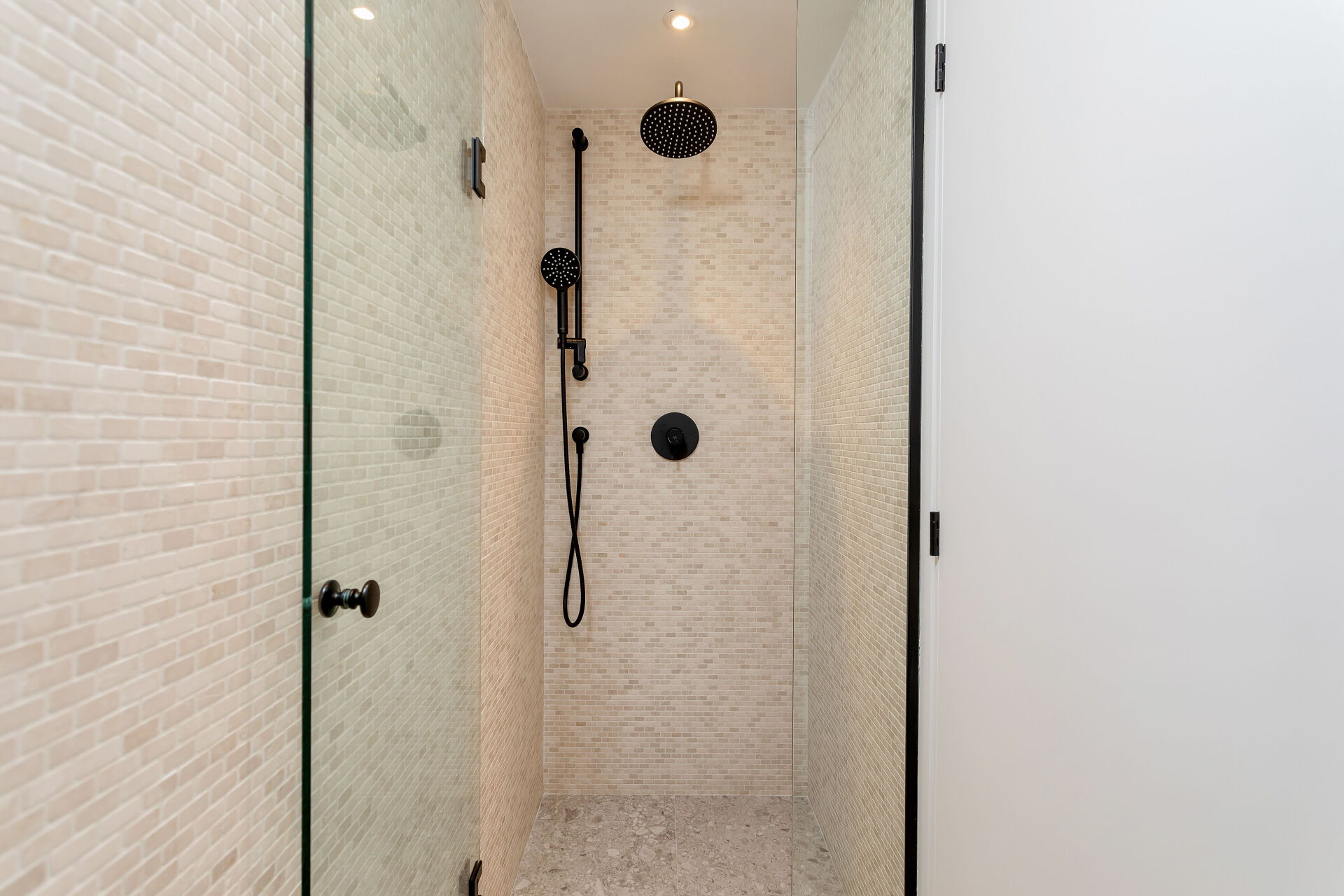 A primary suite takes up the entire third floor of the home. It showcases a custom-built walnut headboard with floating end tables and light sconces. 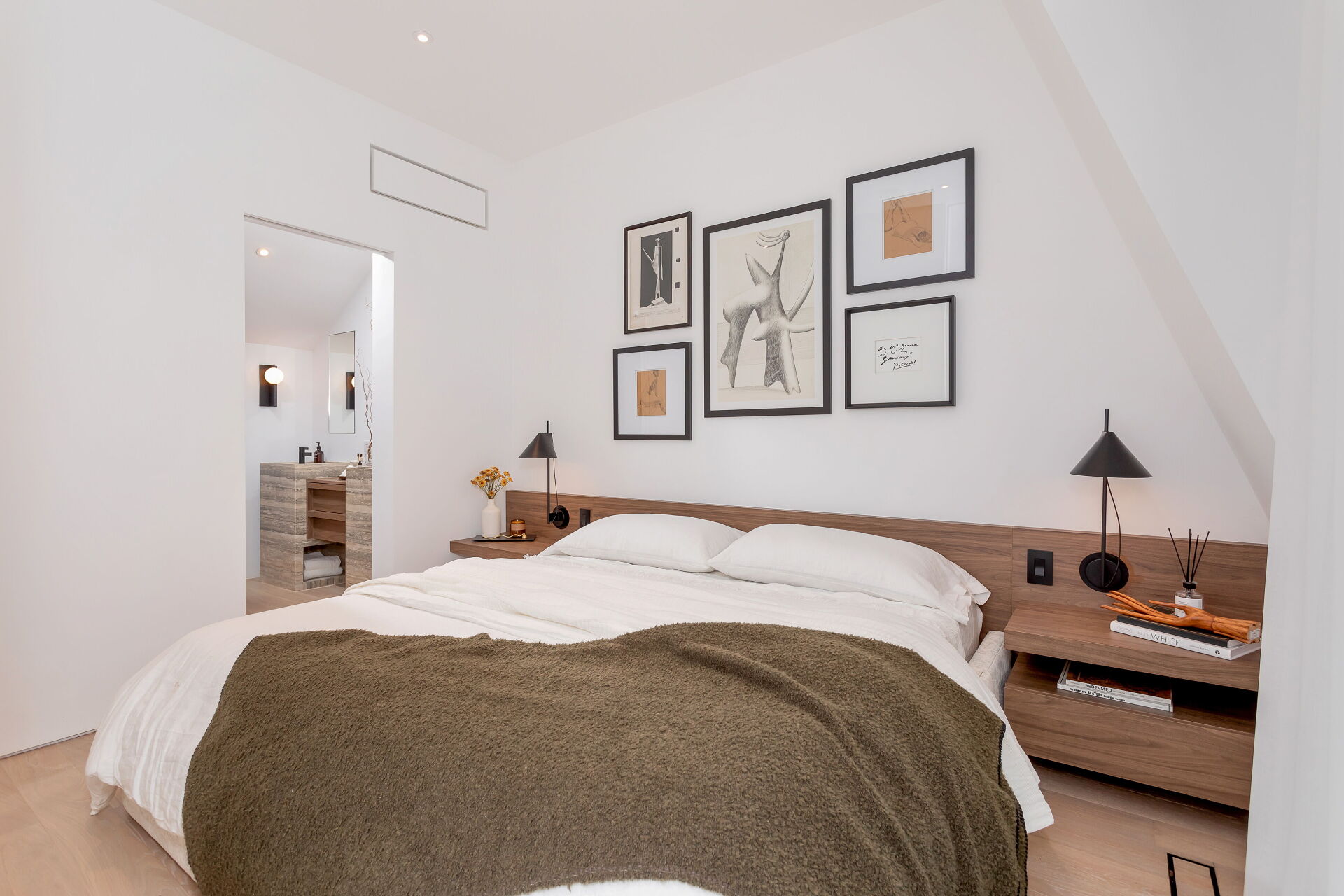 A Juliet balcony with a glass railing overlooks the backyard. 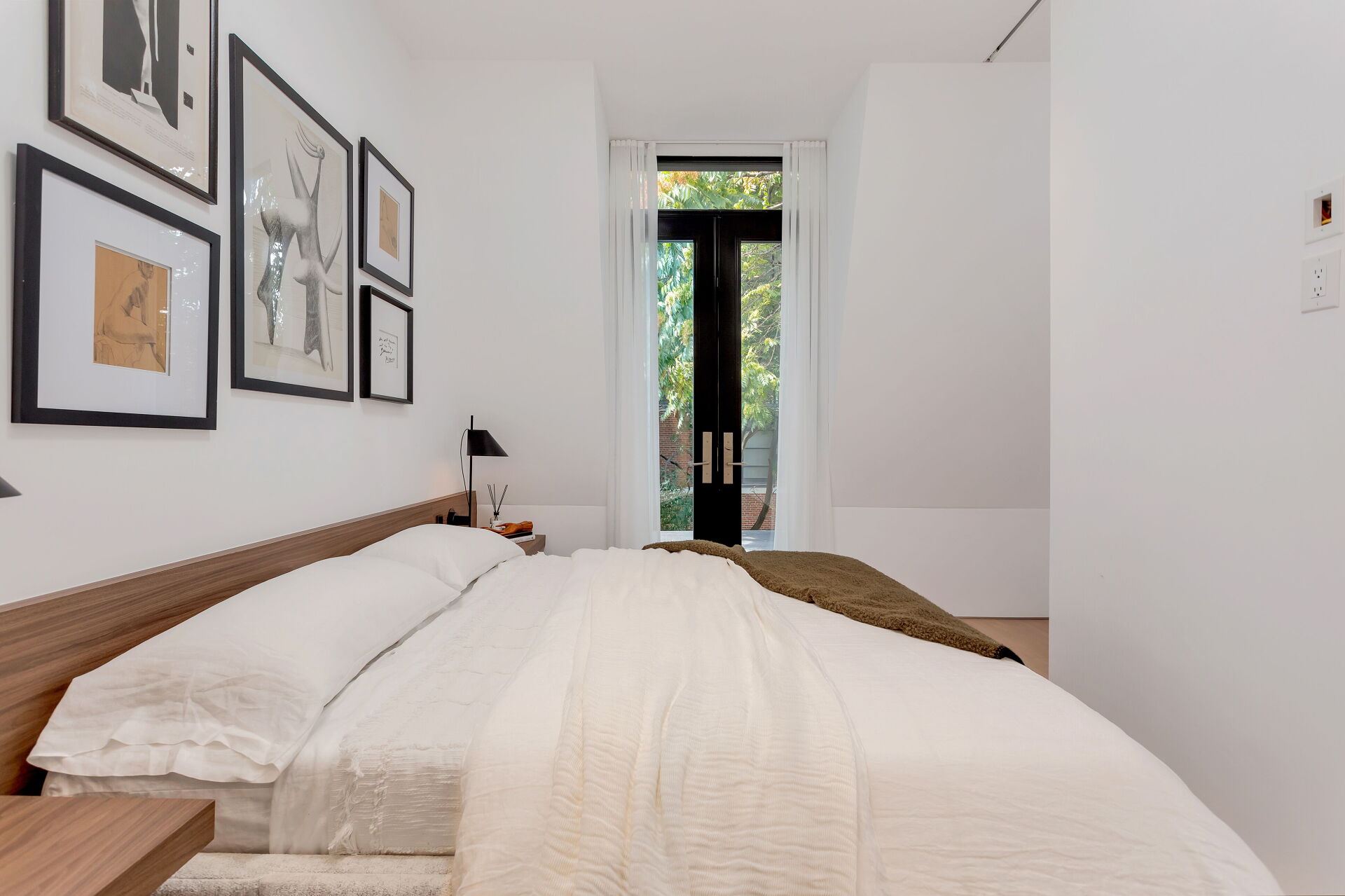 And then there’s the primary washroom with two travertine sinks. Mirrored doors opposite the vanity lead to a commode room and a walk-in closet. 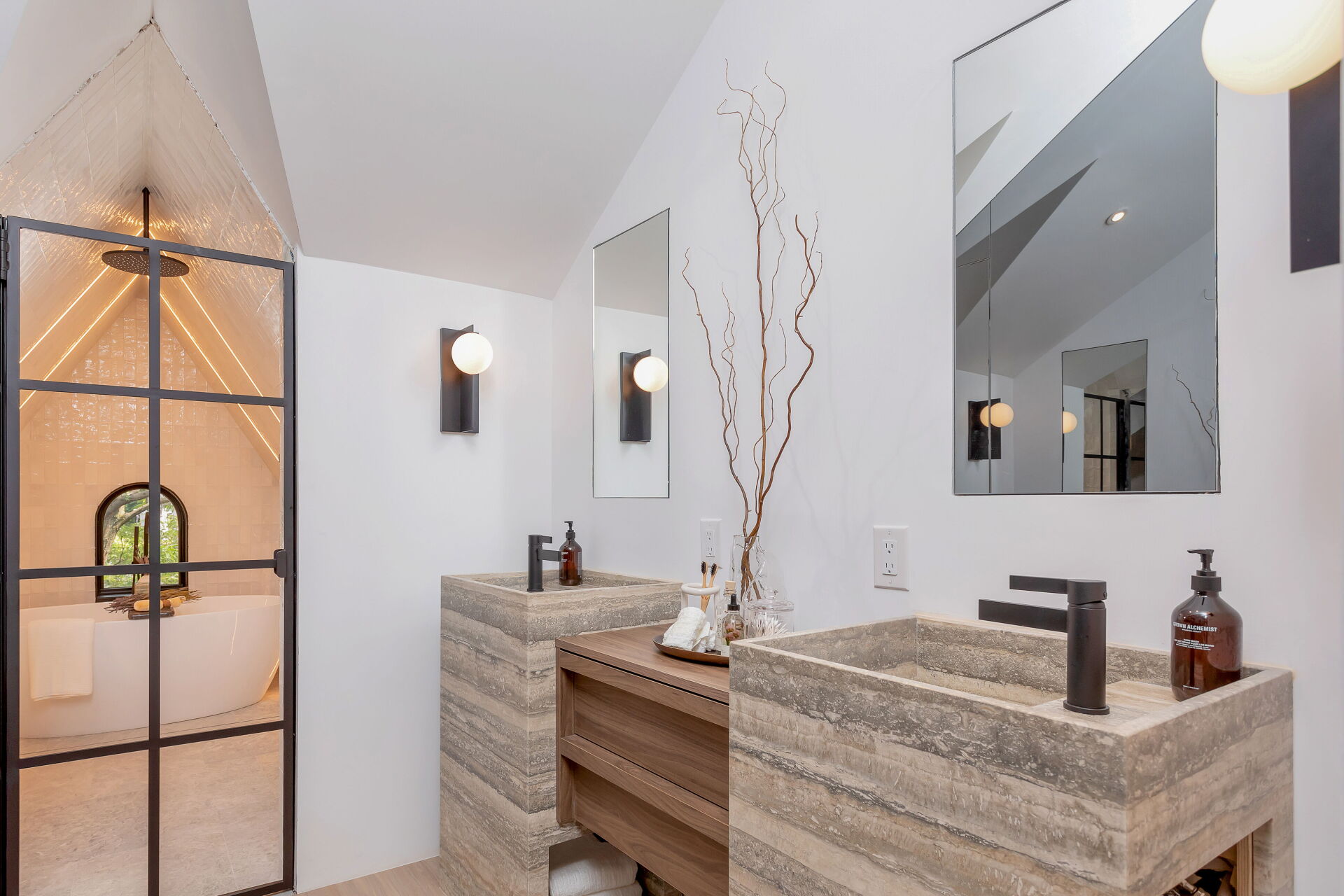 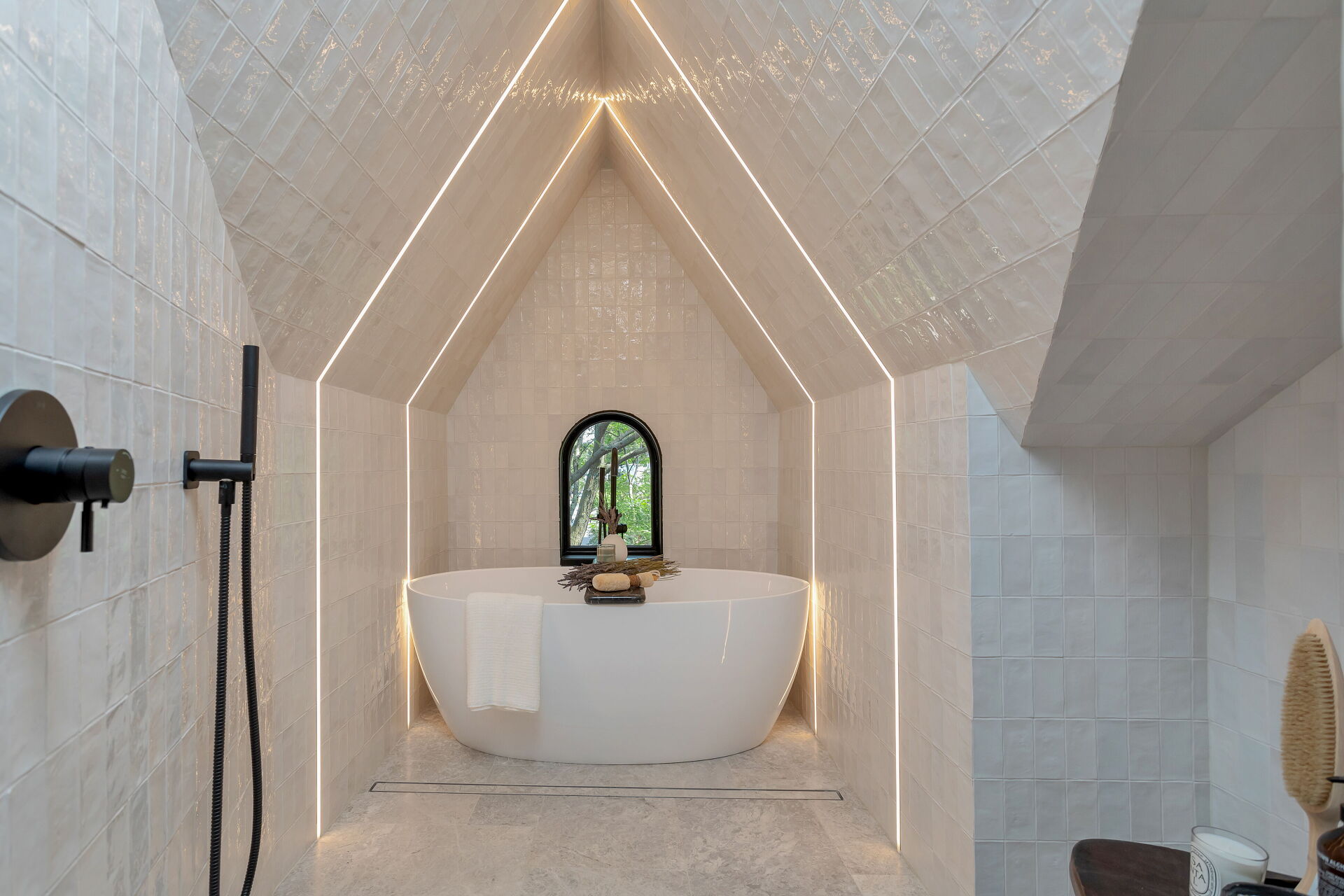 The townhome’s original basement was less than six feet high but was dug out to an eight-foot ceiling height during renovations. This can serve as a rec room or a second living room. The basement floor is made of the same polished concrete as the main floor, and it’s heated too. 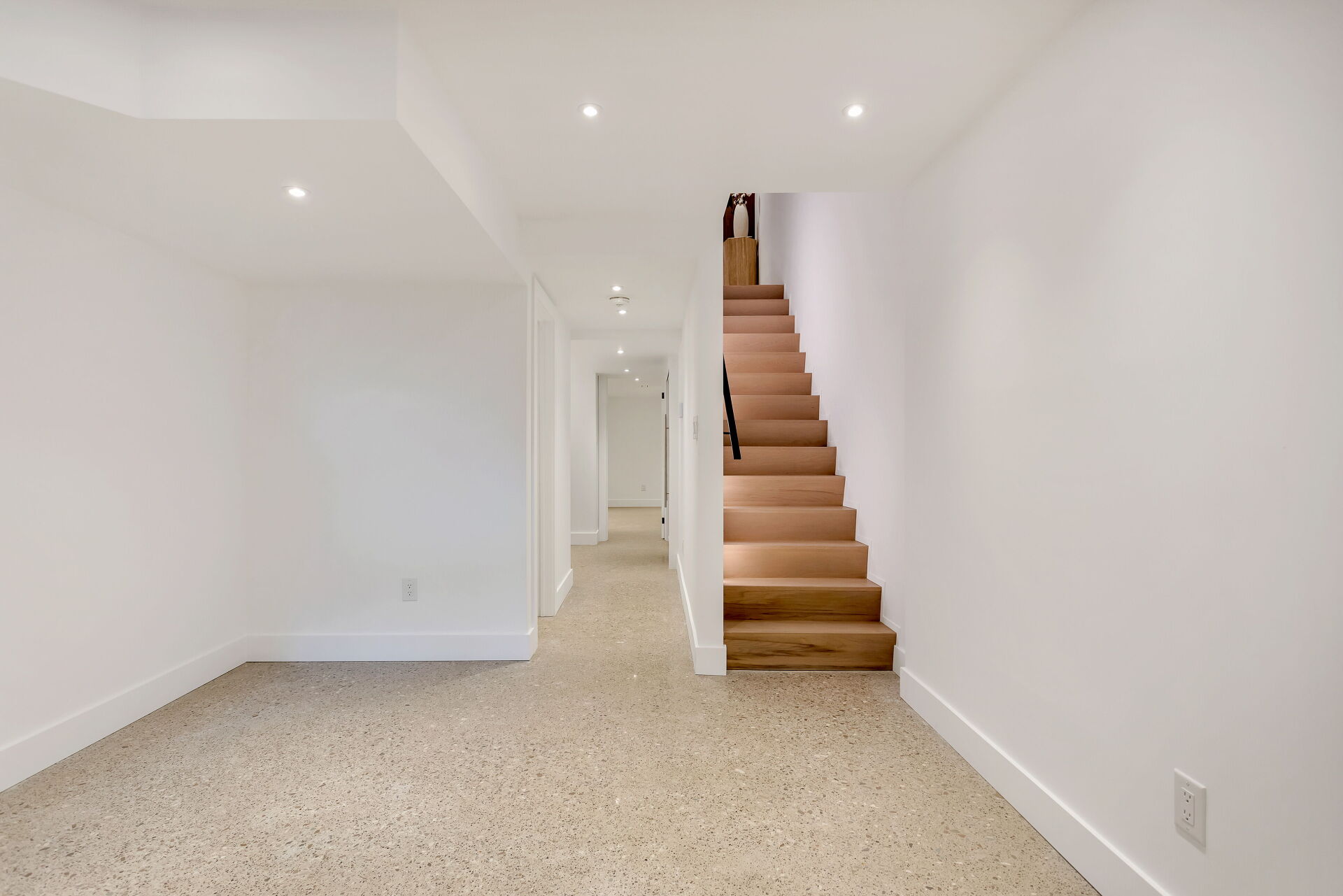 Just past the rec room is a powder room. 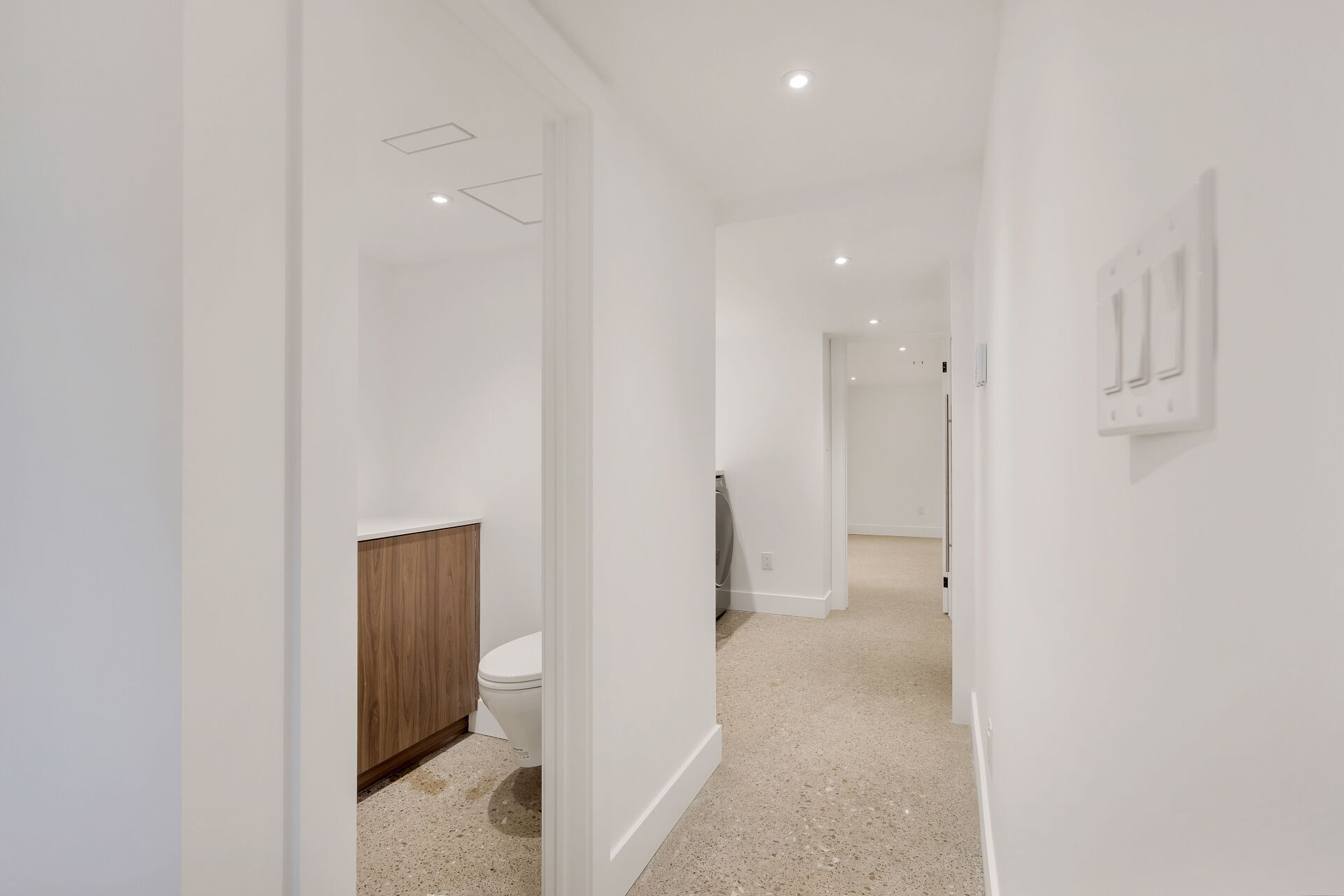 And past the powder room is a laundry area with stone countertops. The HVAC room is behind that glass door on the left. 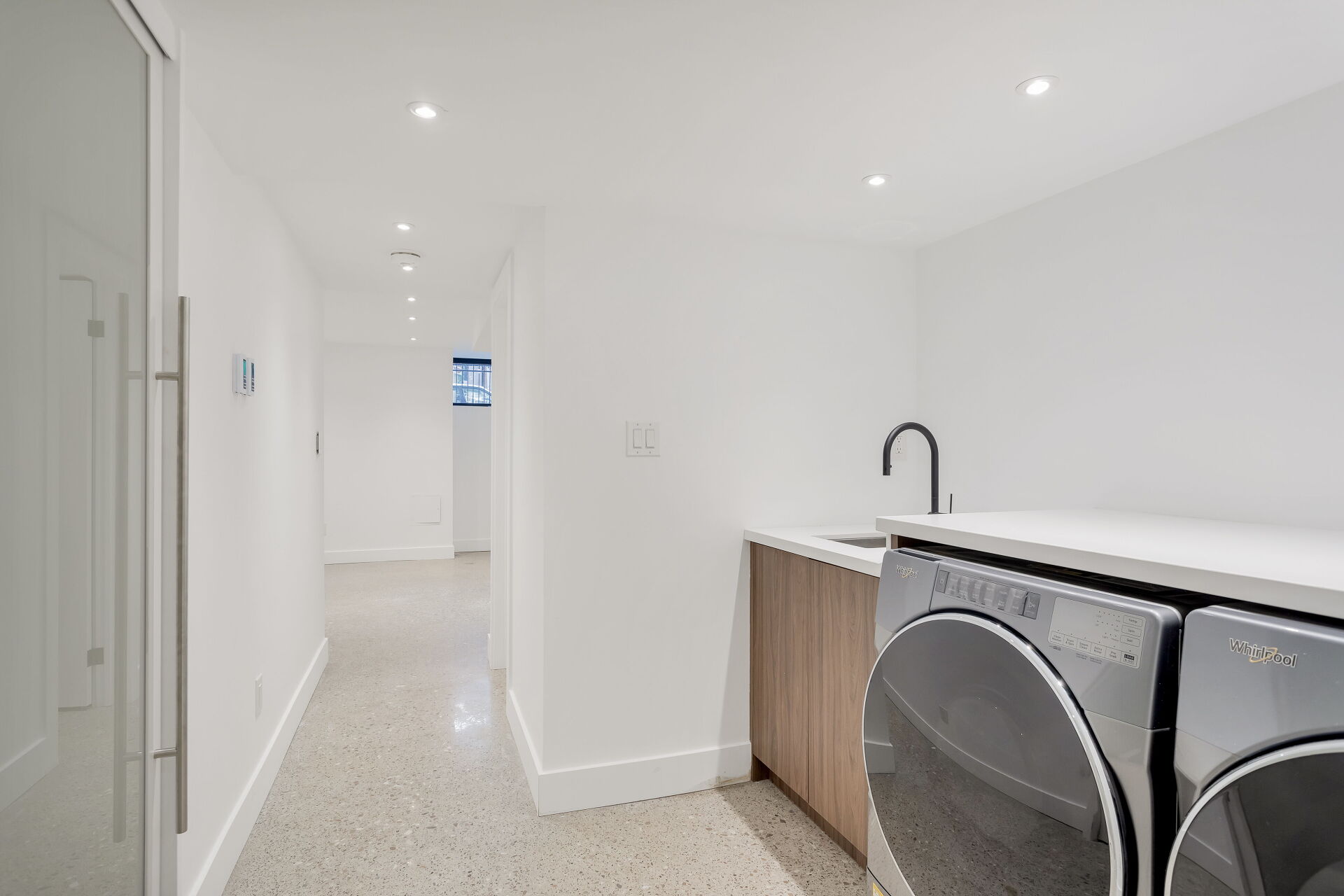 Here’s the back room of the house, which was also dug out during renovations. It could be used as a guest bedroom, an office or a kids’ playroom. 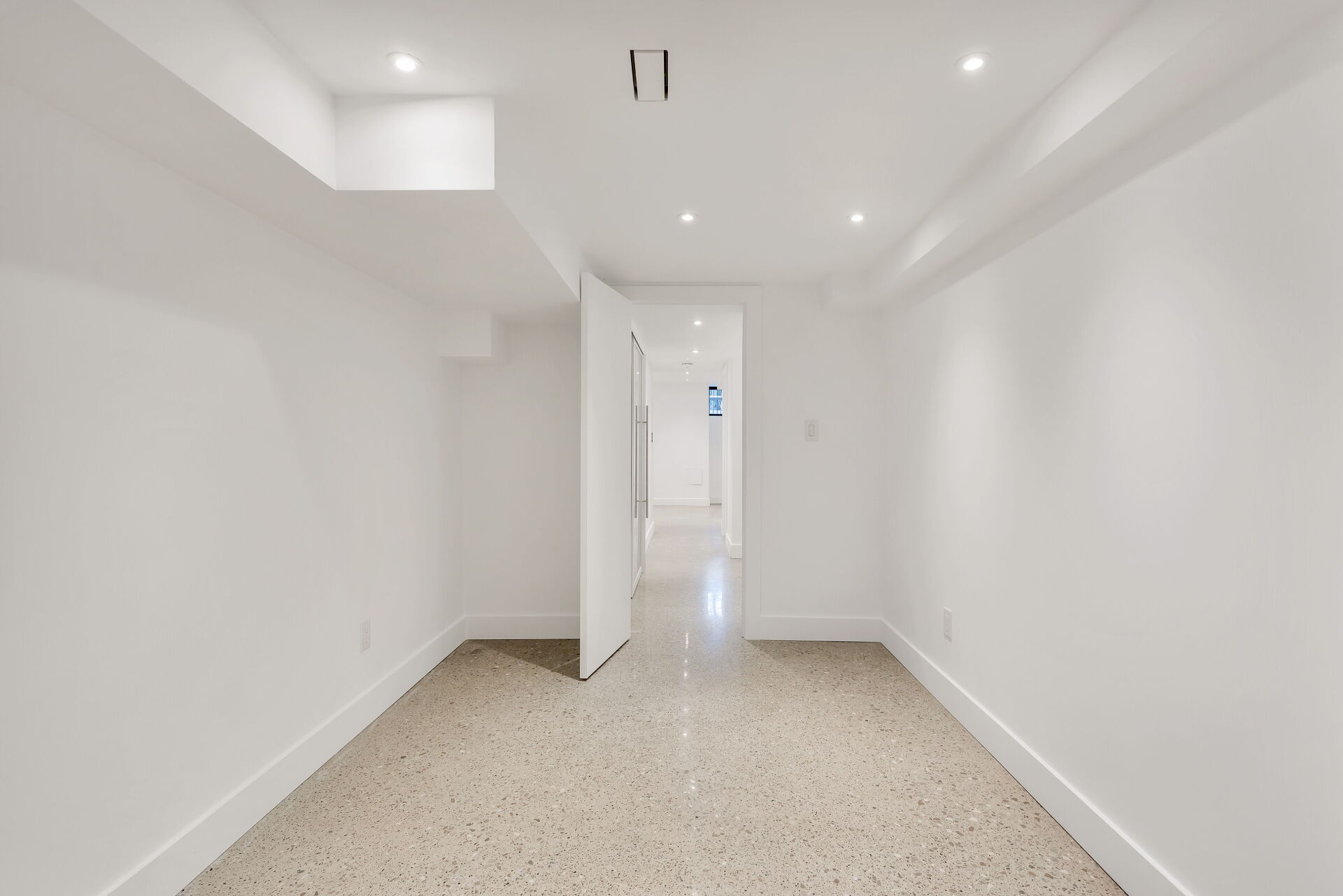 The backyard is wired with an outdoor sound system. There are concrete pads and stonework as well as metal-framed planters and a pergola for shade. 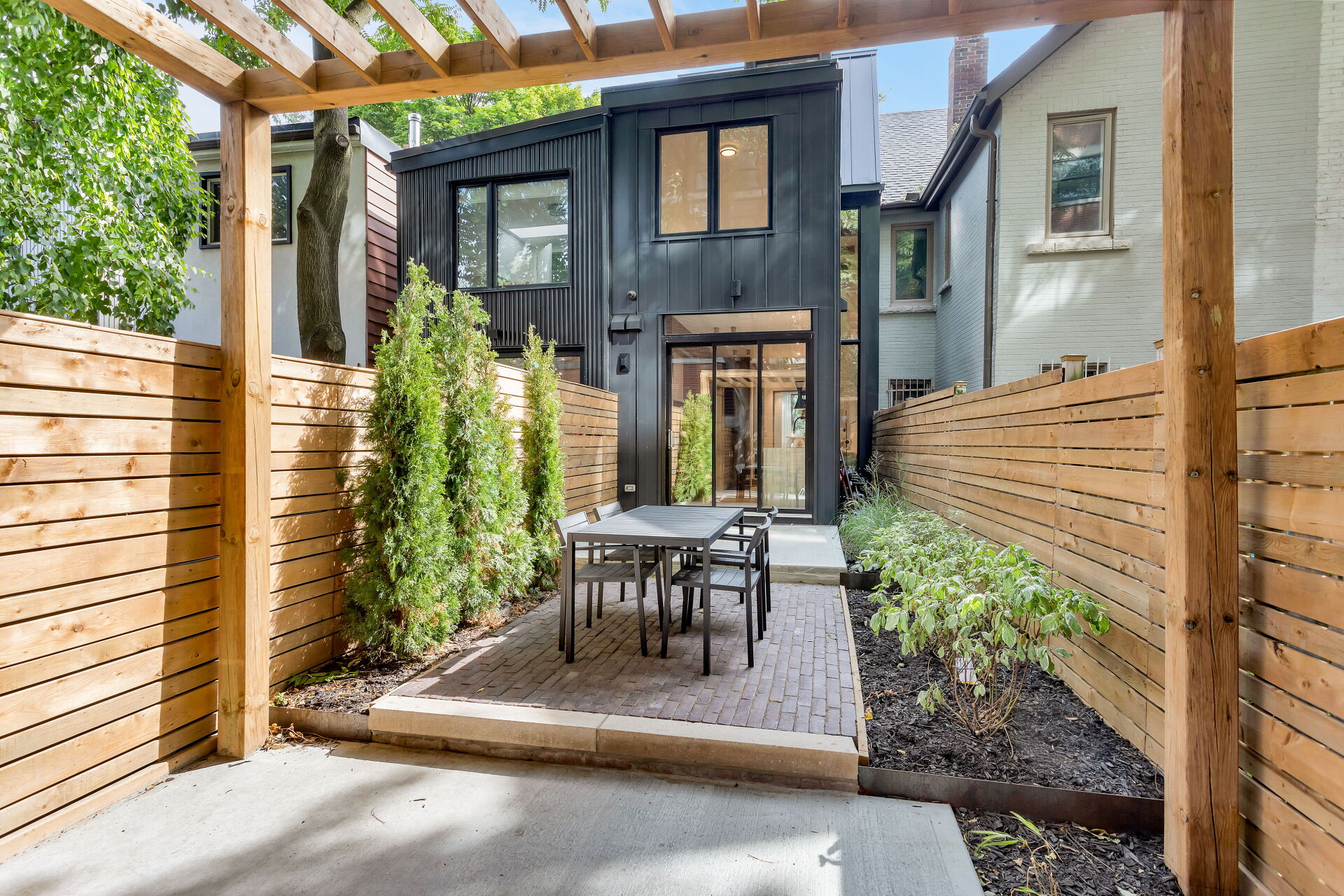