A three-bed, four-bath Georgian-style home near Yonge and Sheppard. The place, built circa 1835, sits at the end of a long tree-lined driveway on an extra-wide lot. On the inside, it’s a mash-up of old and new, with exposed wood beams from the original structure, old-fashioned decor and a modern entertainment room.

The place was built in the early 1800s by Joseph Shepard, a mill owner and political organizer. Historians believe that soldiers tried to destroy the house during the 1837 Upper Canada rebellion. It received heritage status in 1994.

In 2007, a builder bought the home for $565,000. Years later, starting in 2015, he spent roughly $1.5 million restoring it with an architect who specializes in heritage properties. Inside, he refinished the original pine flooring, exposed some of the original beams and renovated the basement. Outside, he redid the driveway and added a kitchen to the back patio.

Here’s a view of the property from the street. The granite driveway has a built-in snow-melting system: 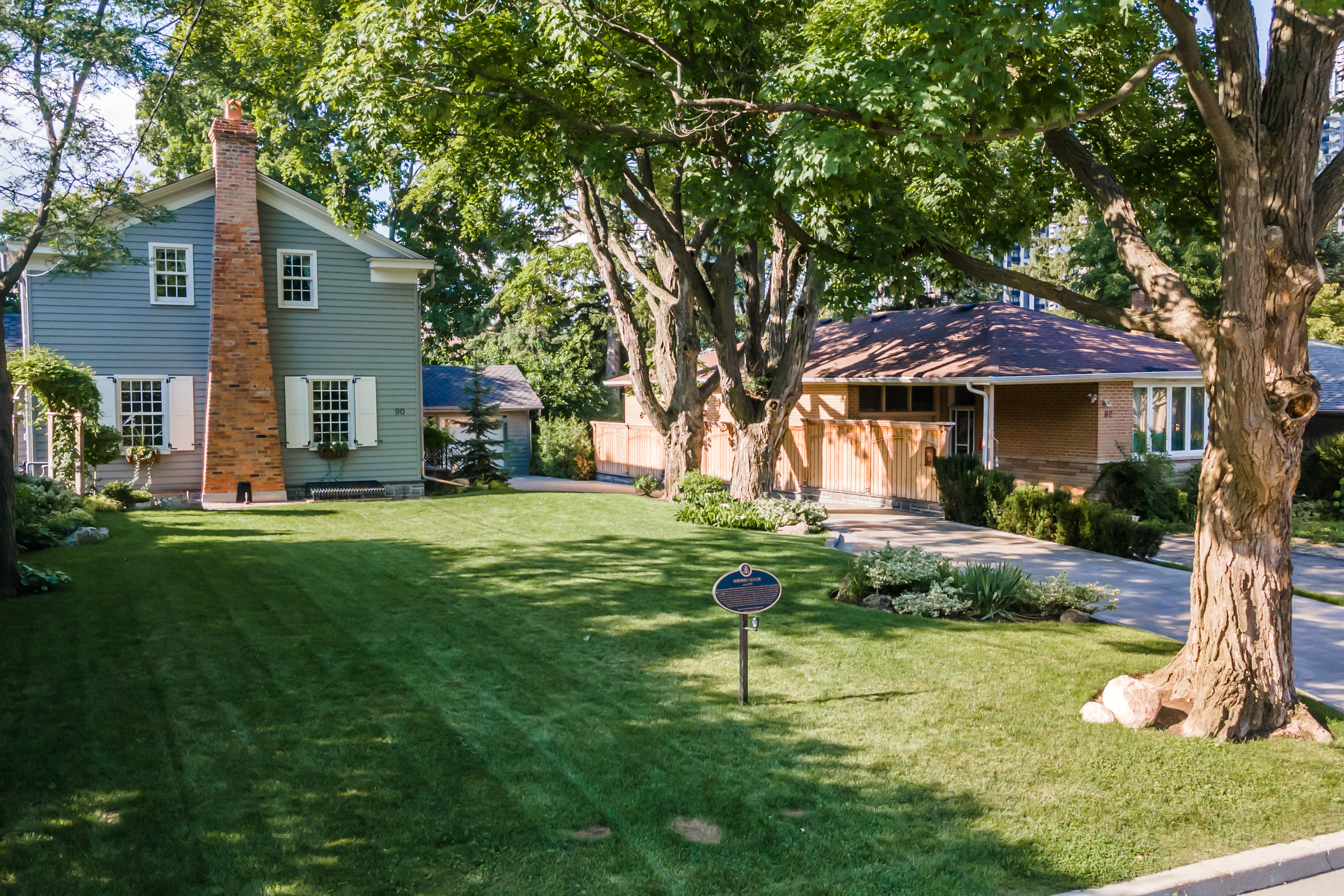 There are limestone plinths framing the front door: 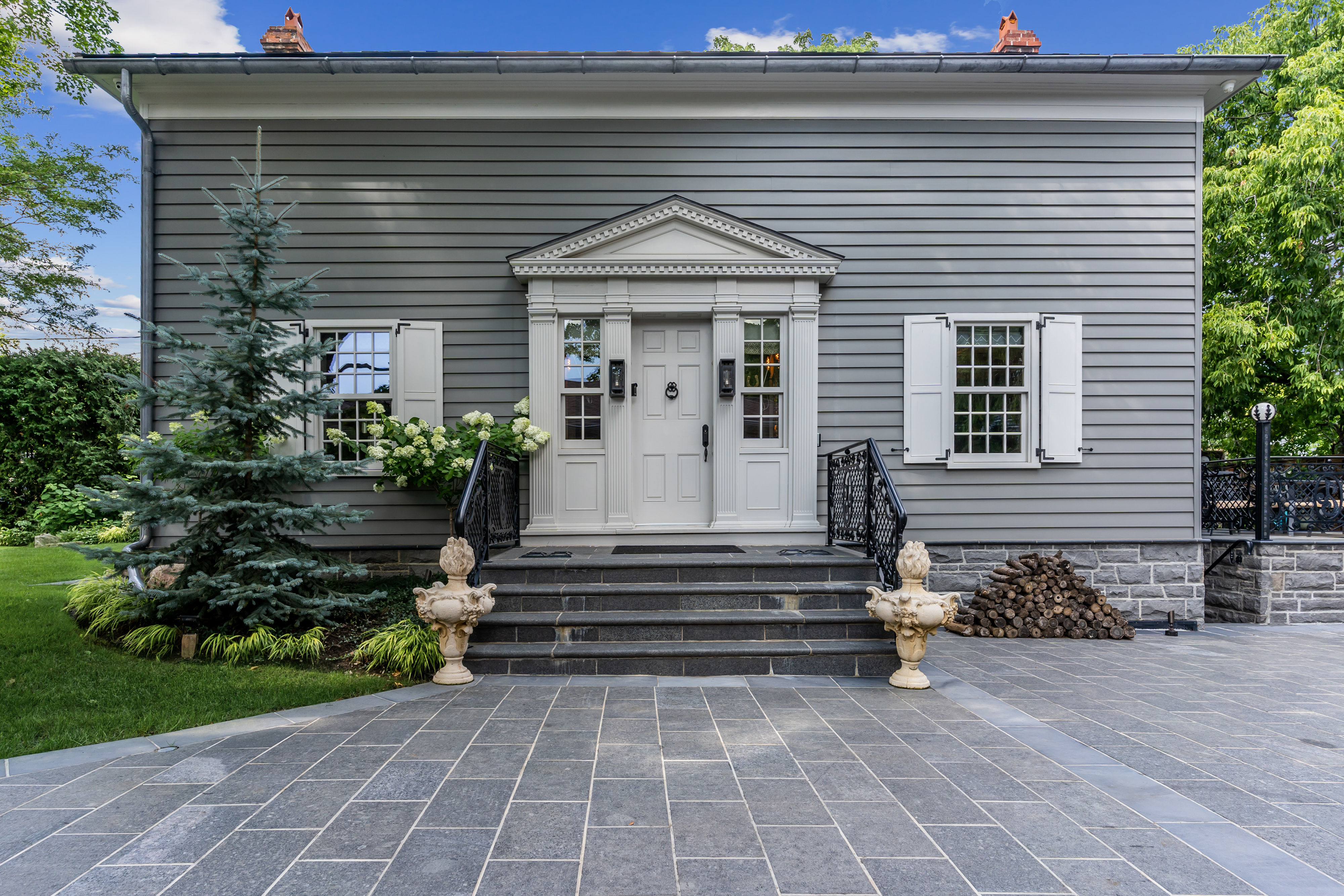 Inside, the owner hired contractors to build the front hall storage units out of reclaimed wood from the original home: 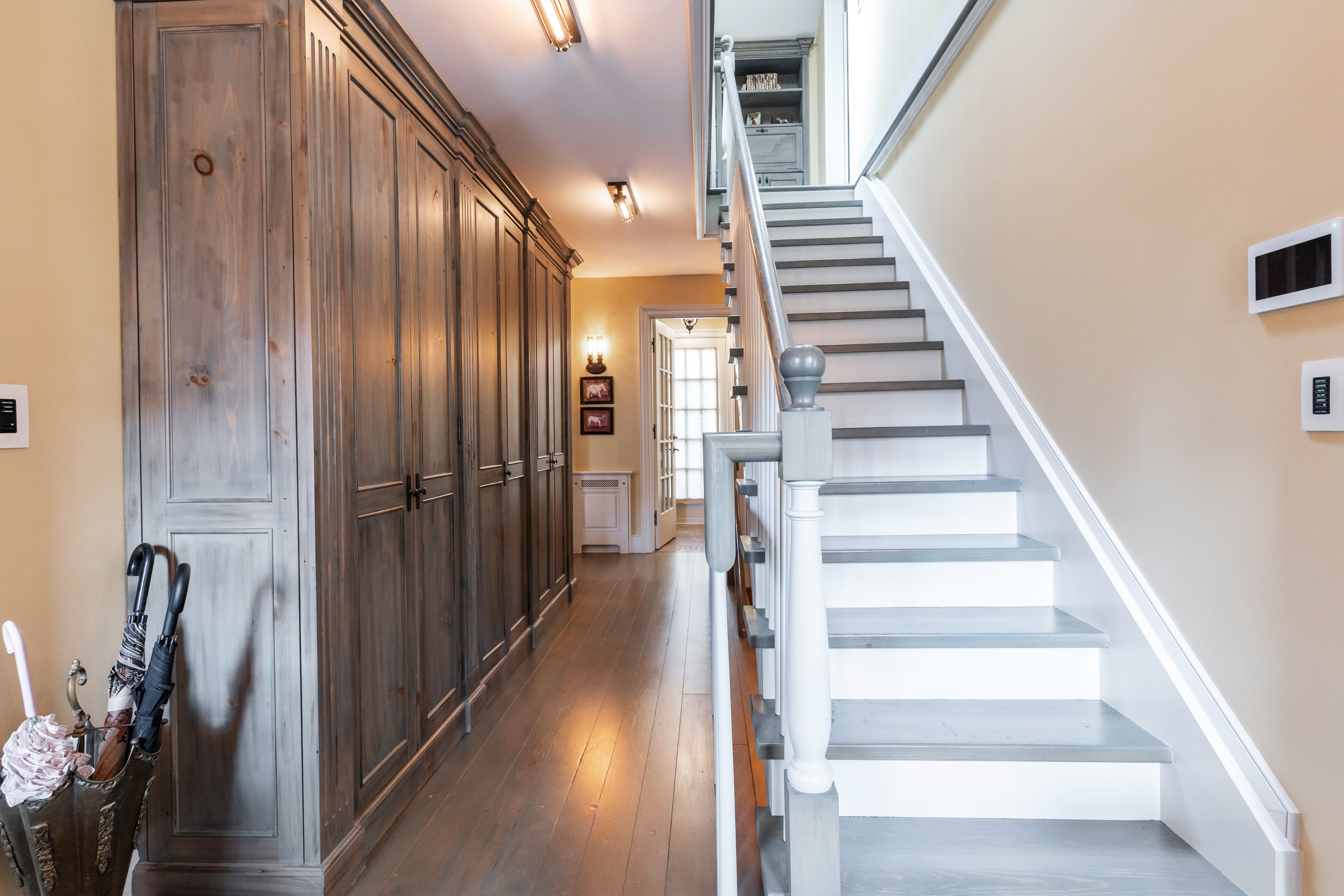 The frame around the wood-burning fireplace in the living room is made from marble and reclaimed wood: 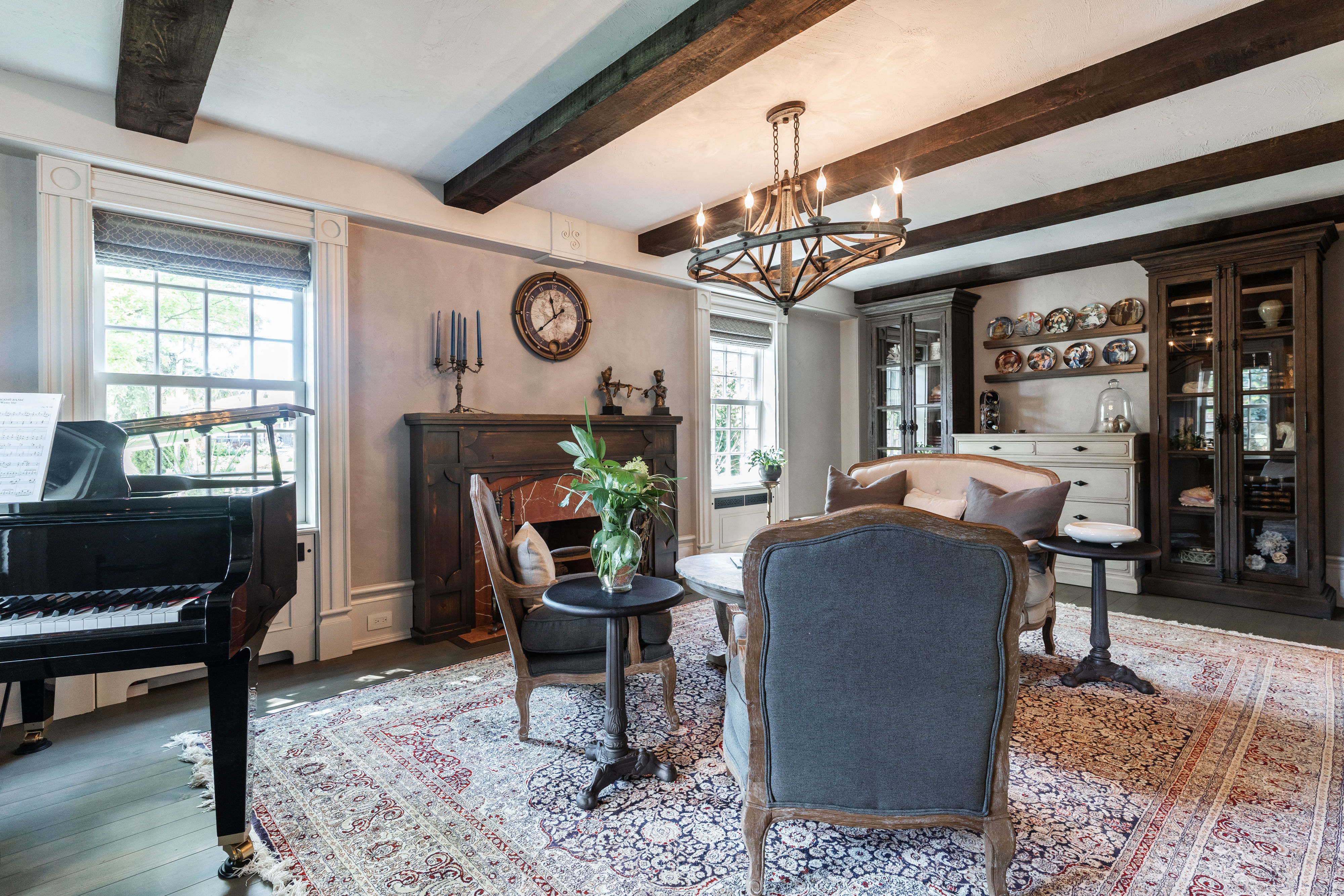 Hoping to give the kitchen some old-school charm, the sellers added a farmhouse sink and an antique-style oven: 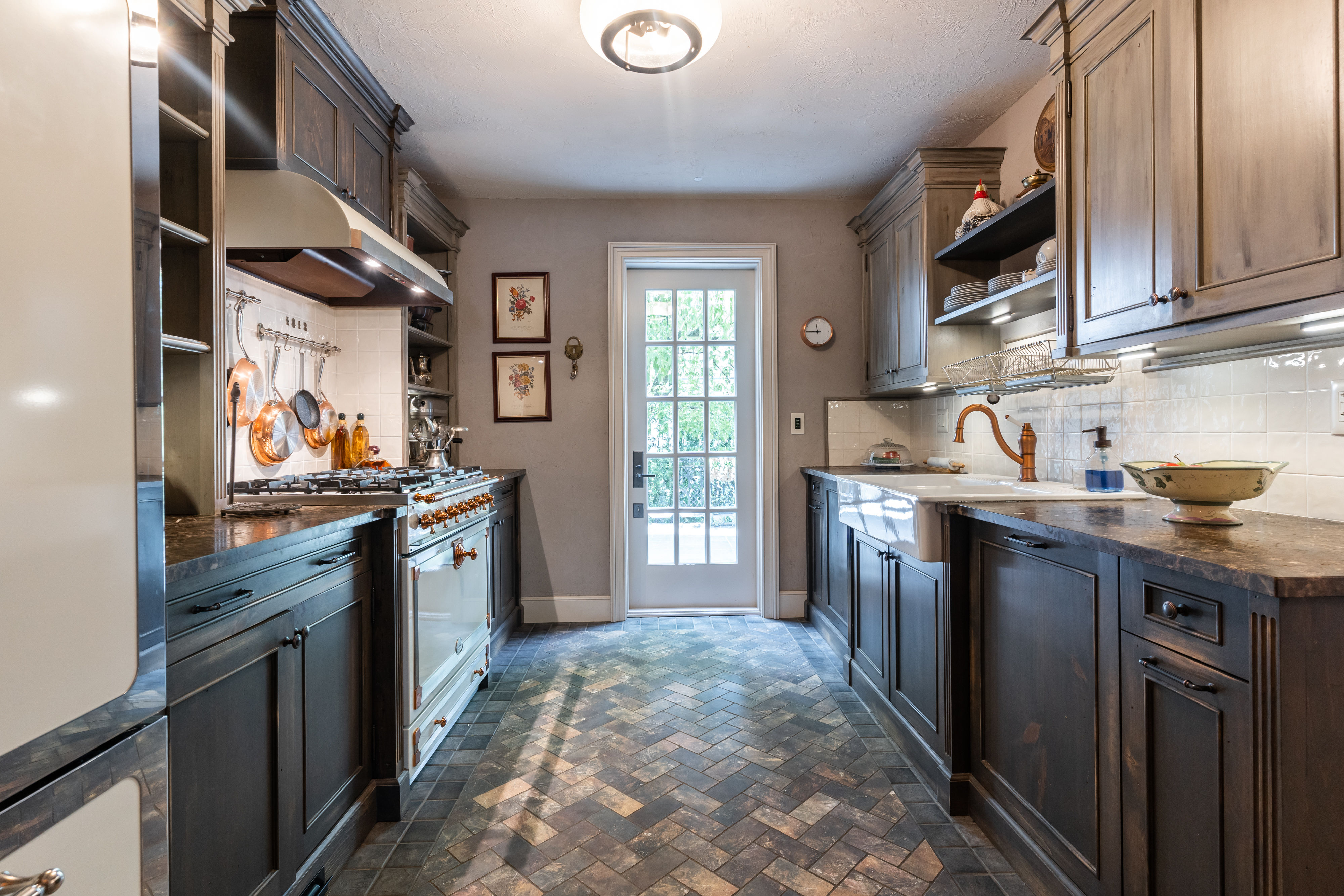 The kitchen also has heated porcelain floors and marble countertops: 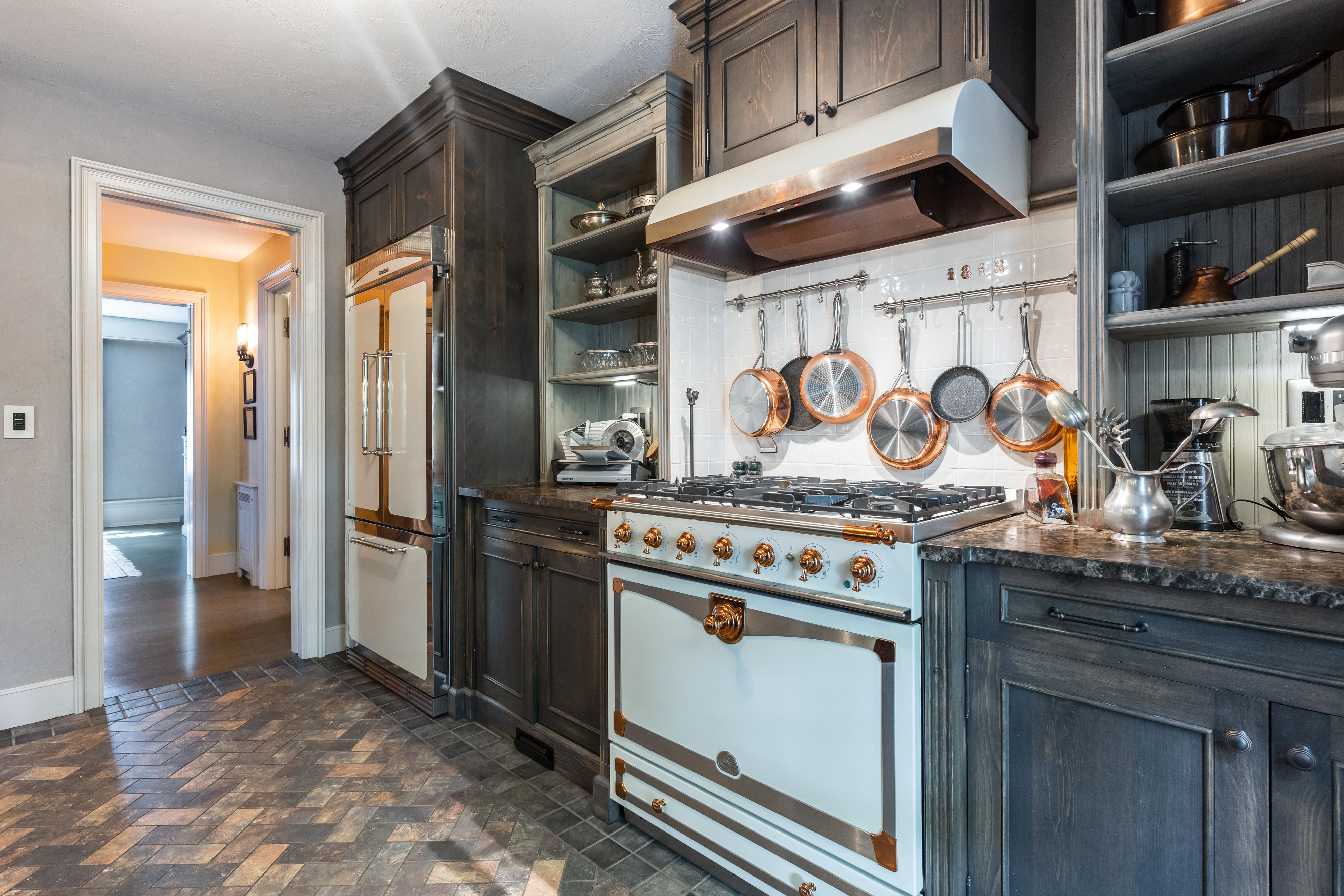 Here’s a closer look at the porcelain farmhouse sink: 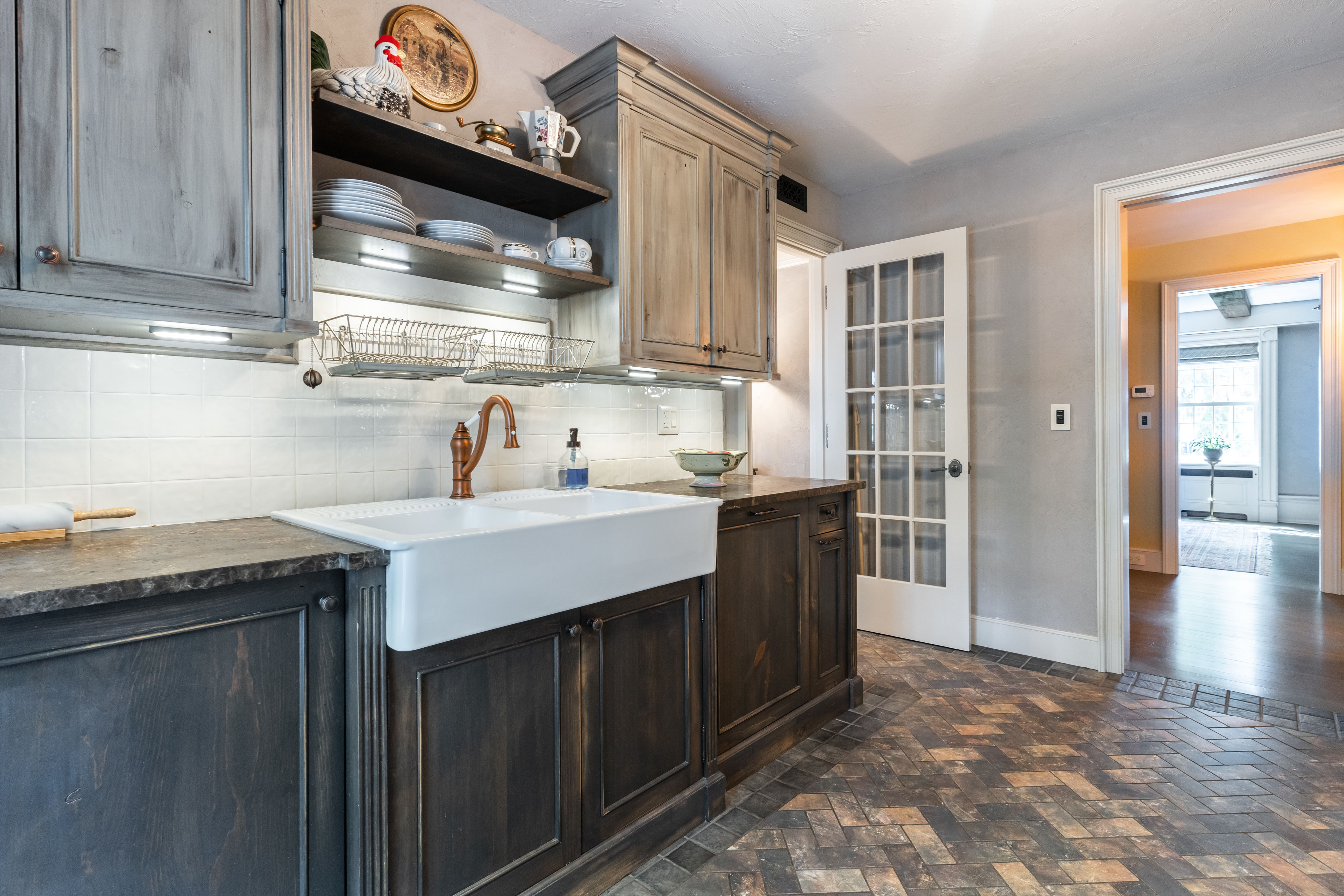 In the 160-square-foot dining room, the sellers exposed some of the original wood on the back wall, creating a makeshift spot for liquor storage: 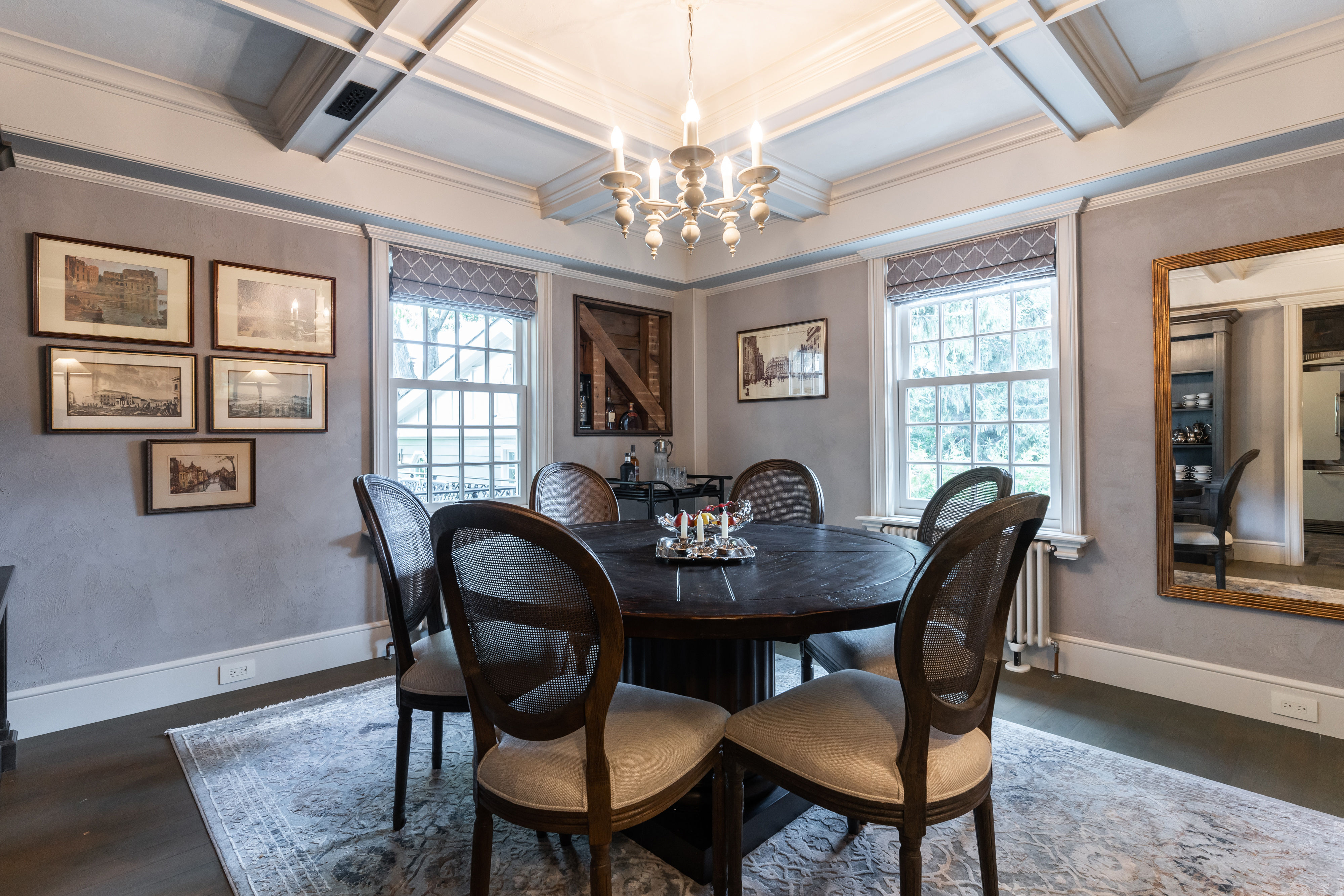 There’s a frosted skylight in the upstairs foyer: 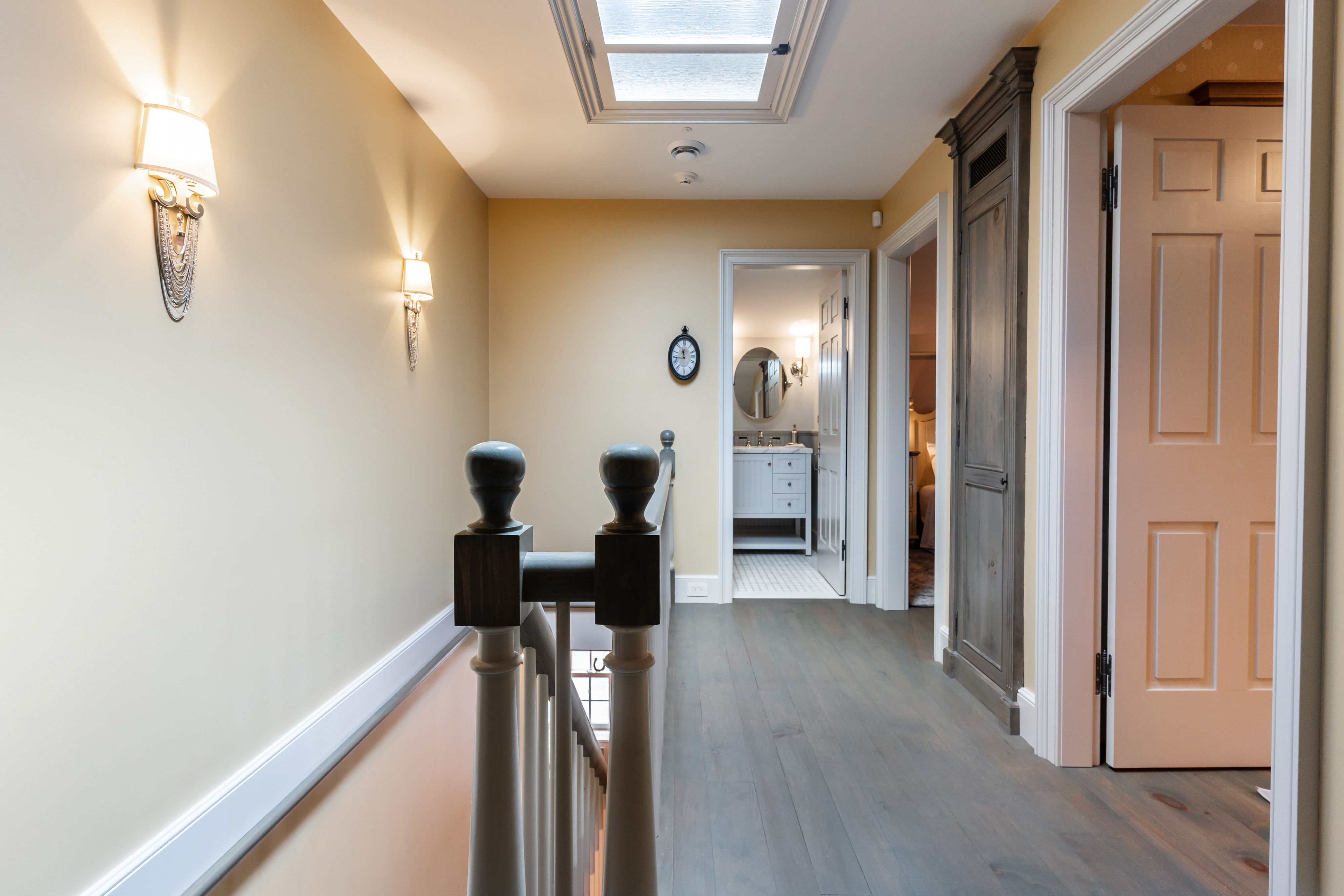 In the master suite, there’s a crystal chandelier and German silk wallpaper: 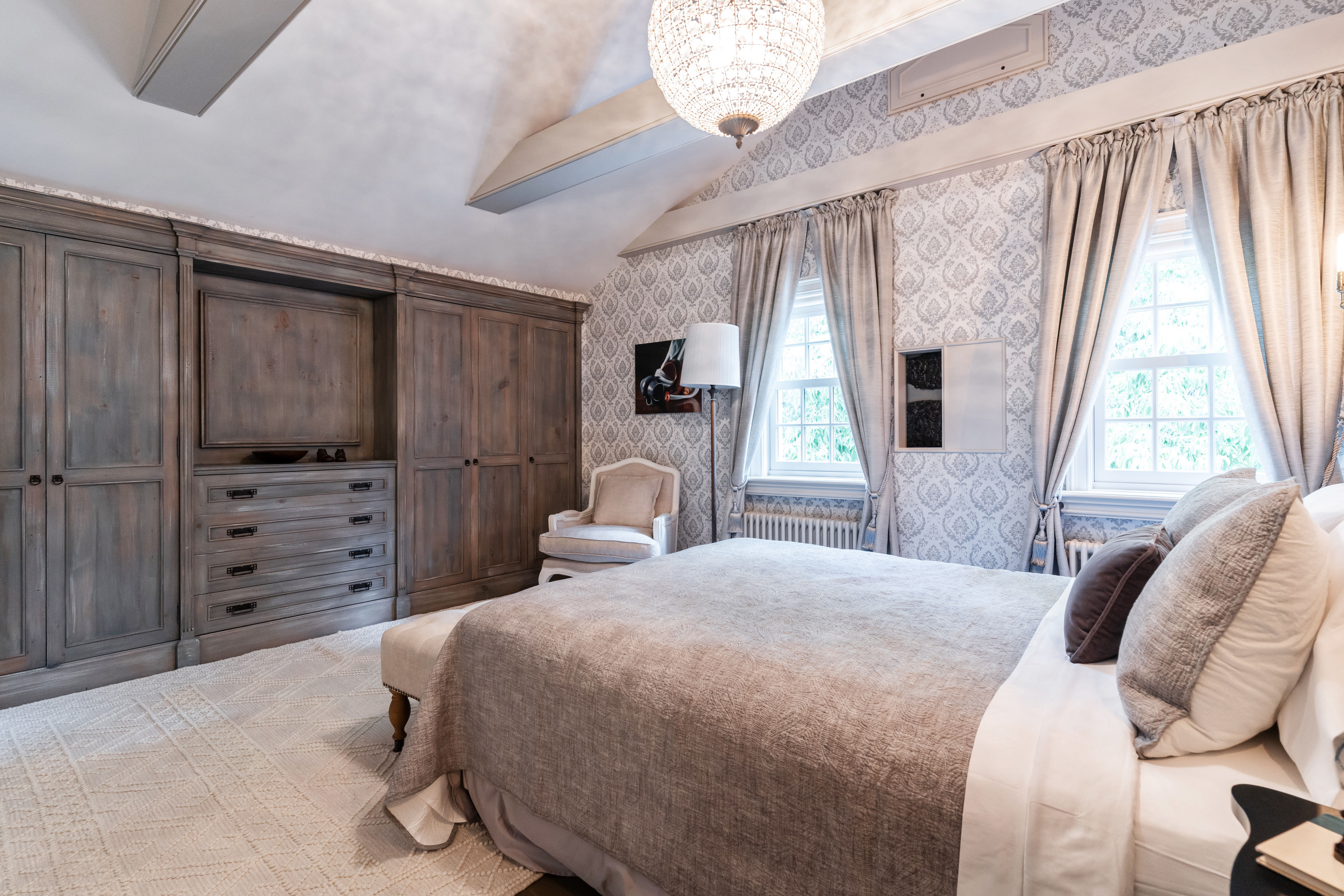 The ensuite master bathroom has a cast iron tub and heated marble flooring: 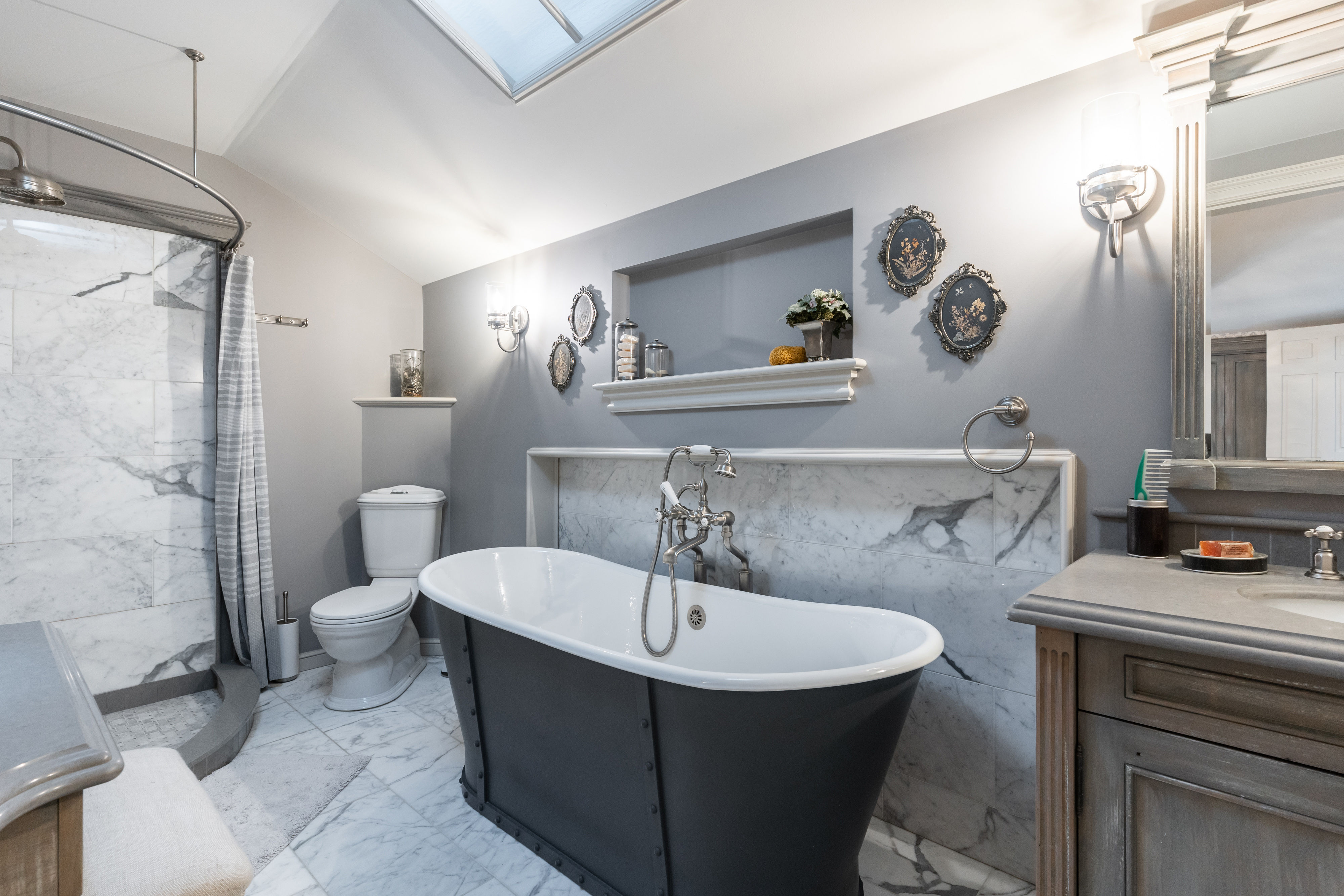 The second bedroom is 135 square feet with a partially sloped ceiling: 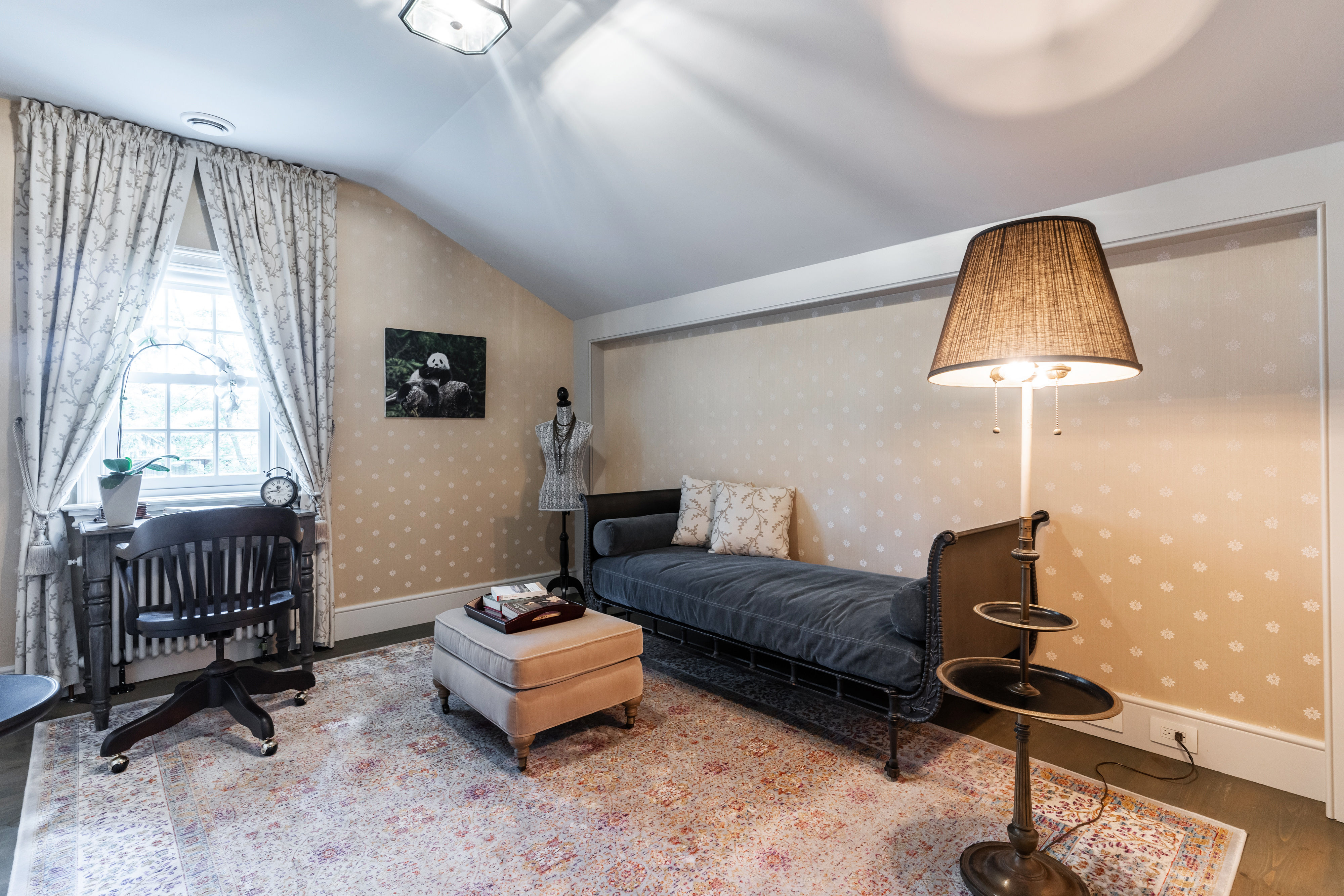 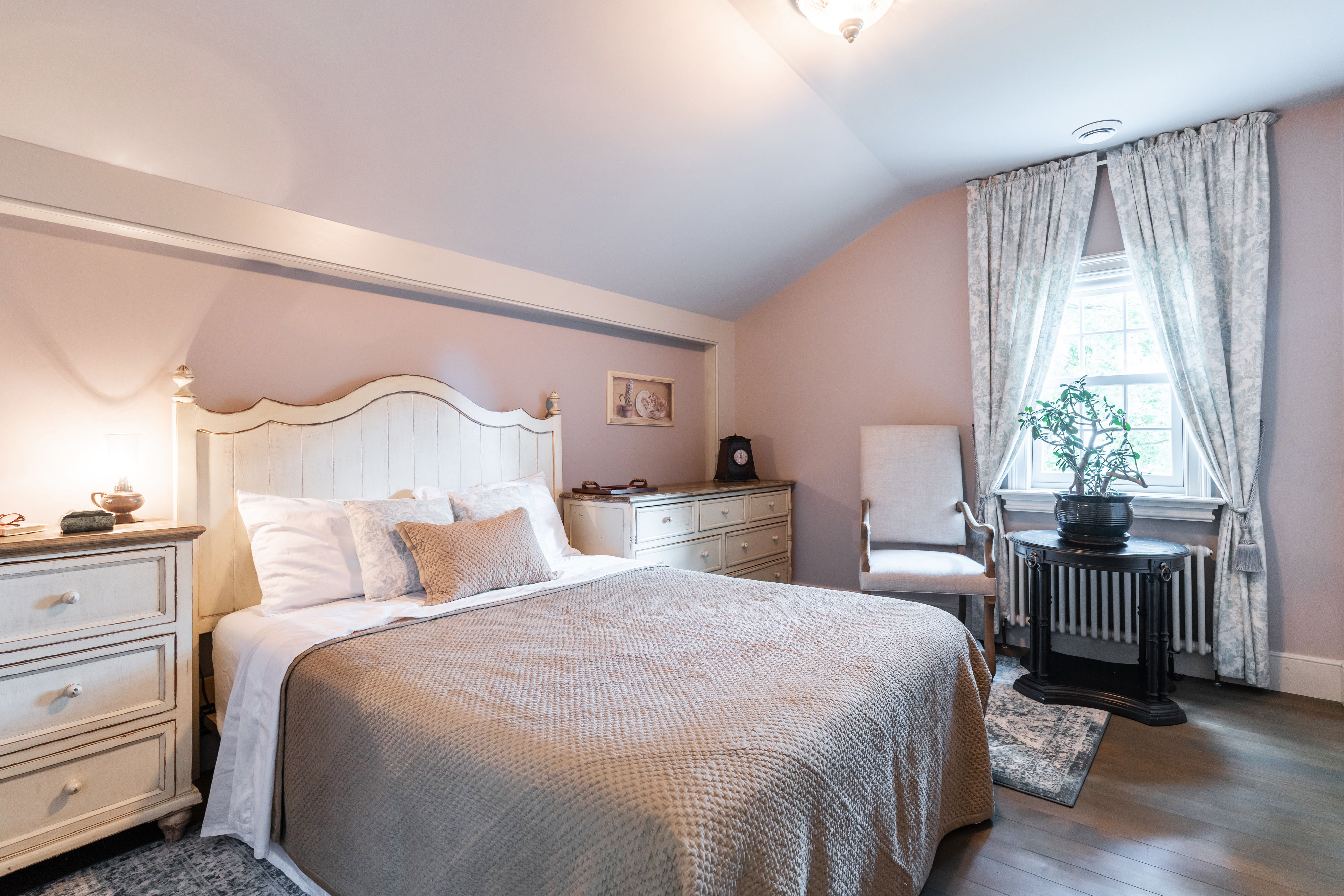 The second upstairs bathroom has mosaic marble floors and a cast iron tub: 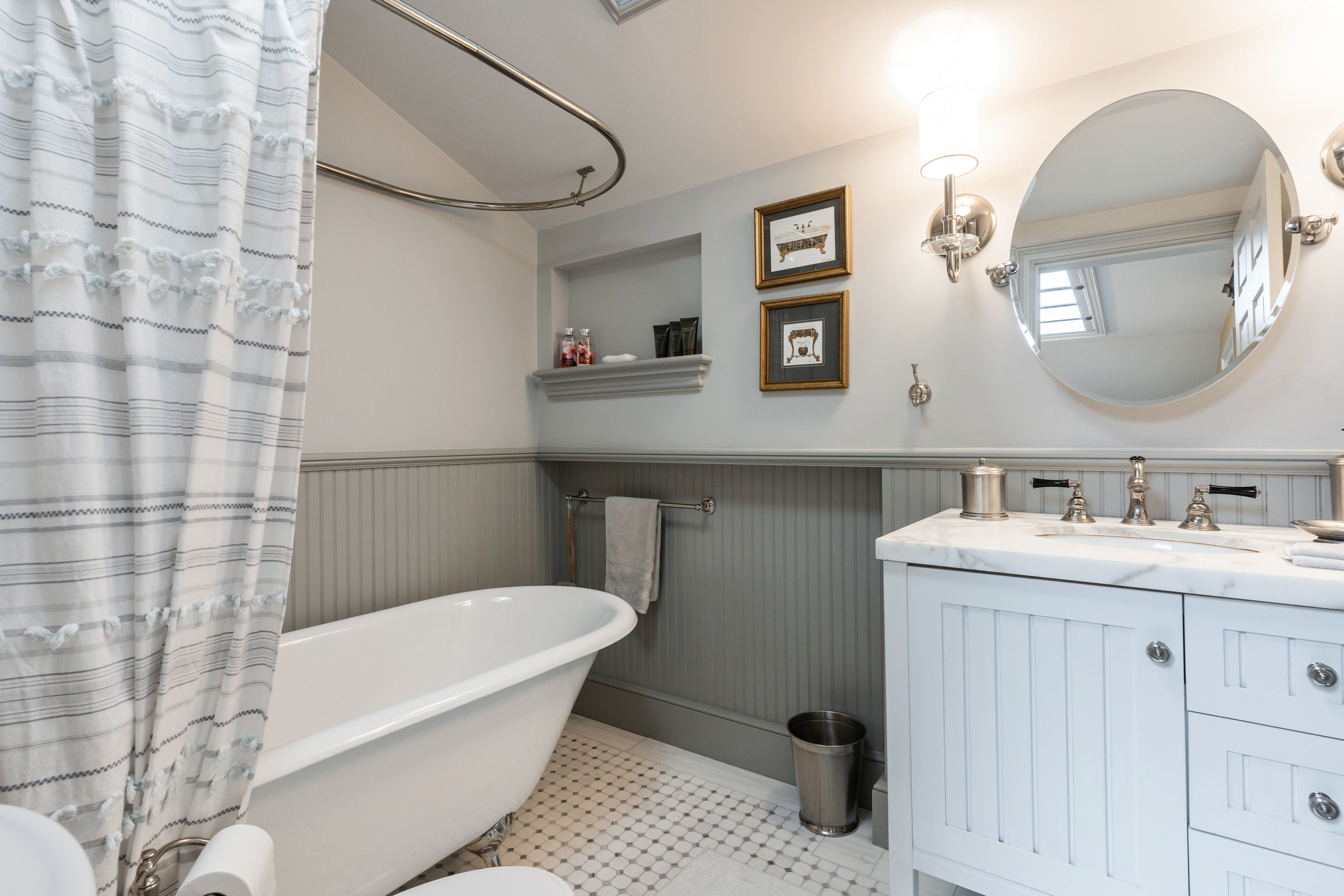 The chains along the staircase were inspired by a design feature in one of the seller’s favourite films, the 60s French comedy Oscar, starring Louis de Funès. 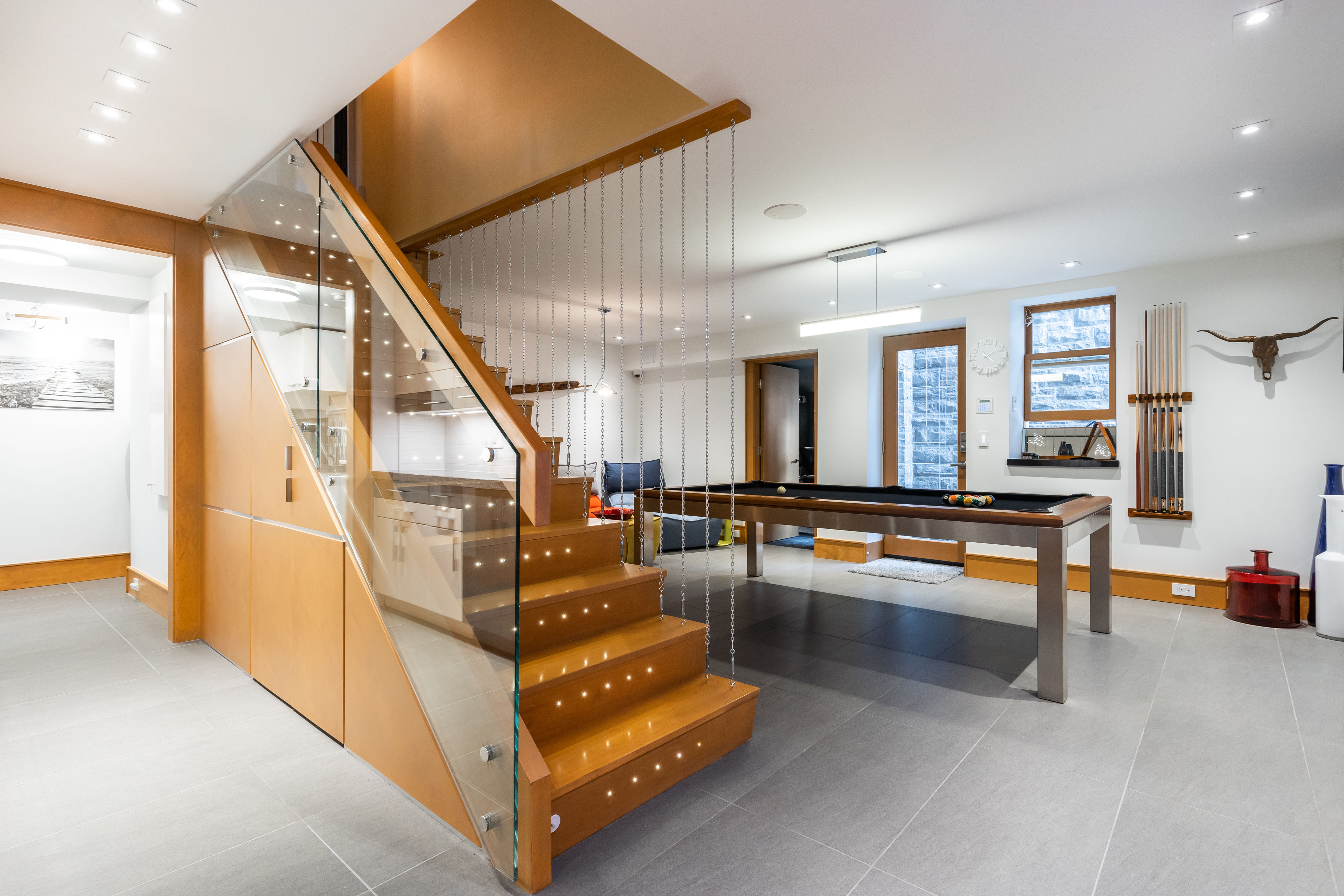 In the lounge area, there’s a 250-bottle wine cellar: 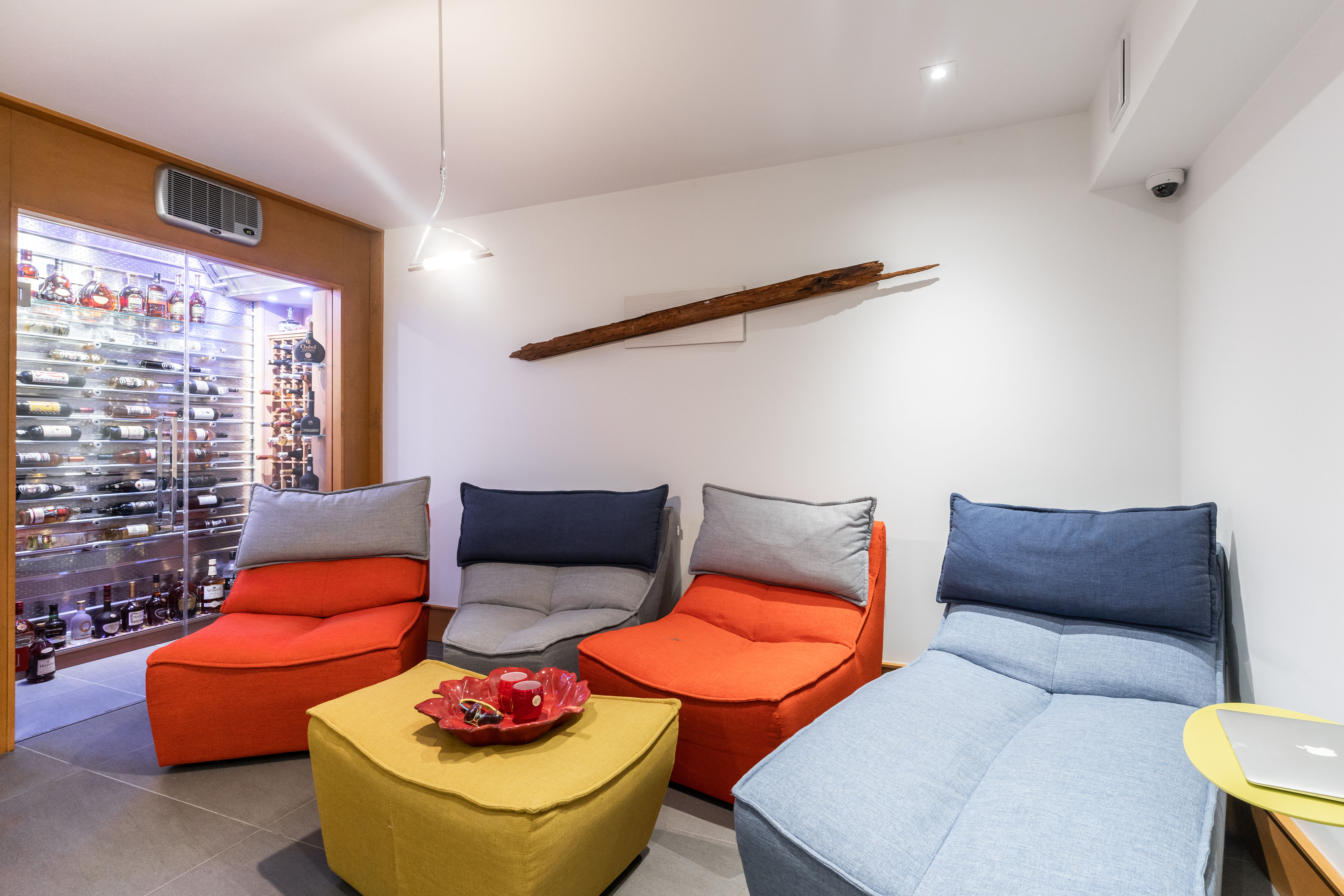 In 2015, the seller built this 350-square-foot sound-proofed movie theatre. His wife found the Old Hollywood-style statuettes at a garage sale: 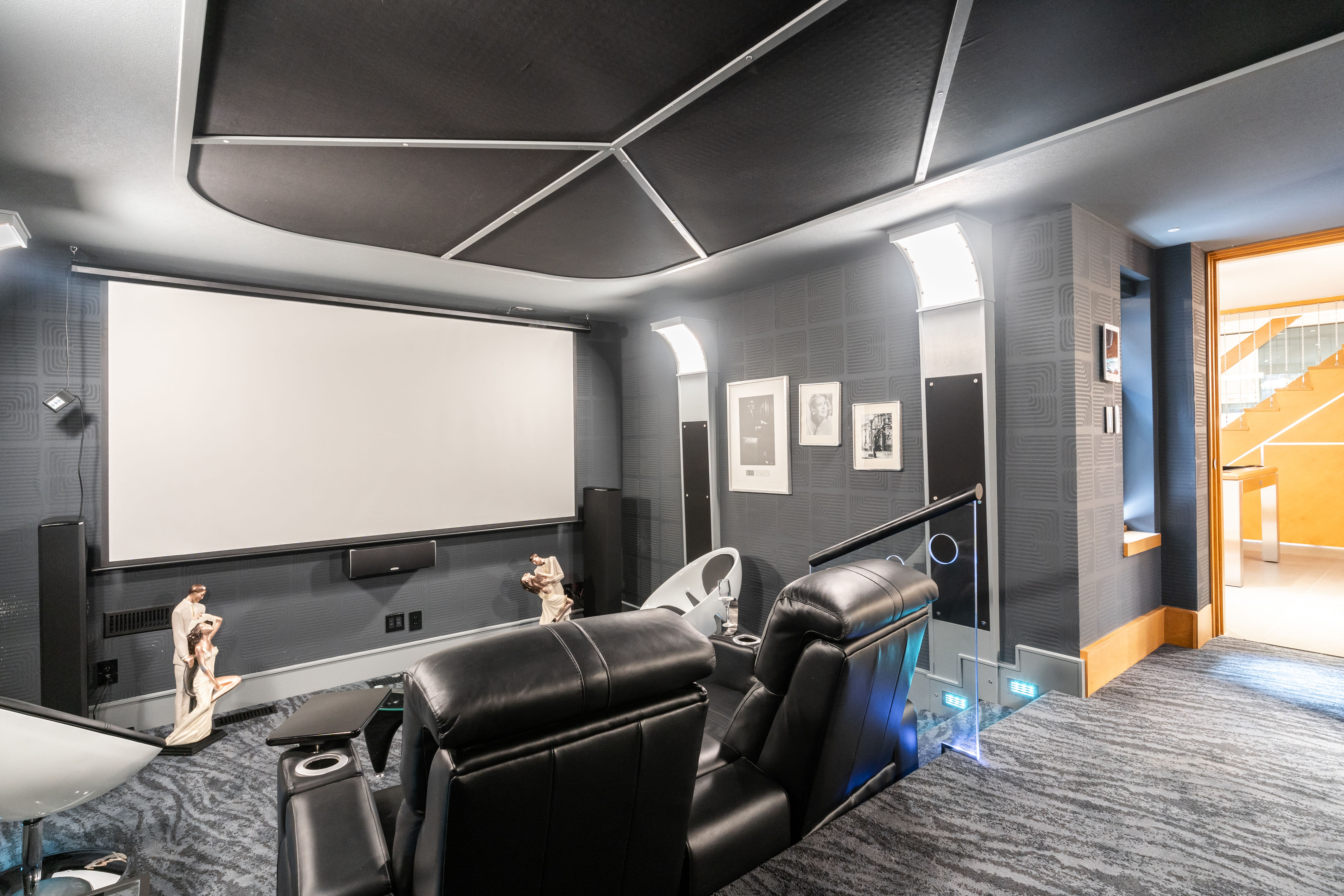 On the wall in the 150-square-foot basement office, there’s a mounted piece of wood from the original home: 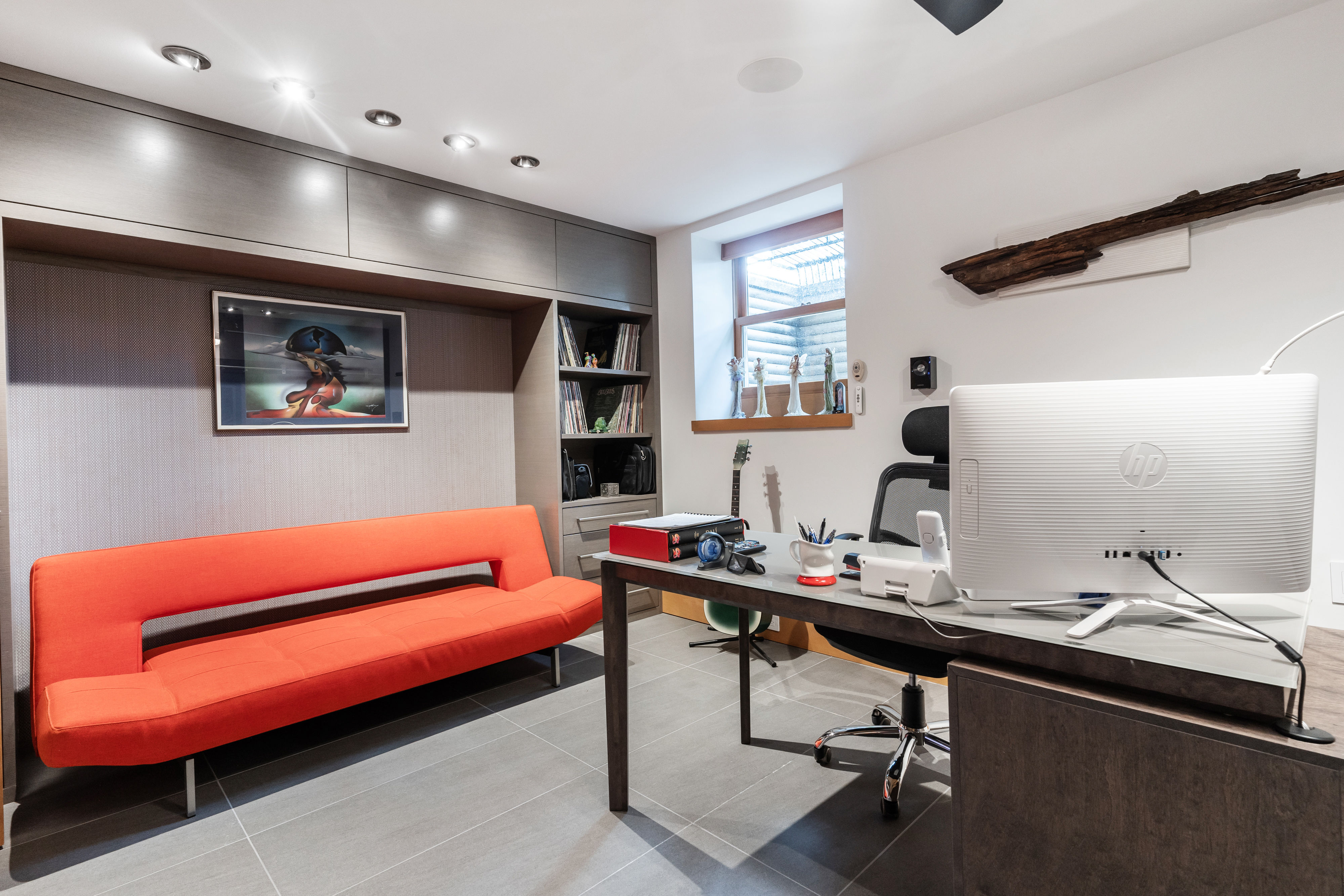 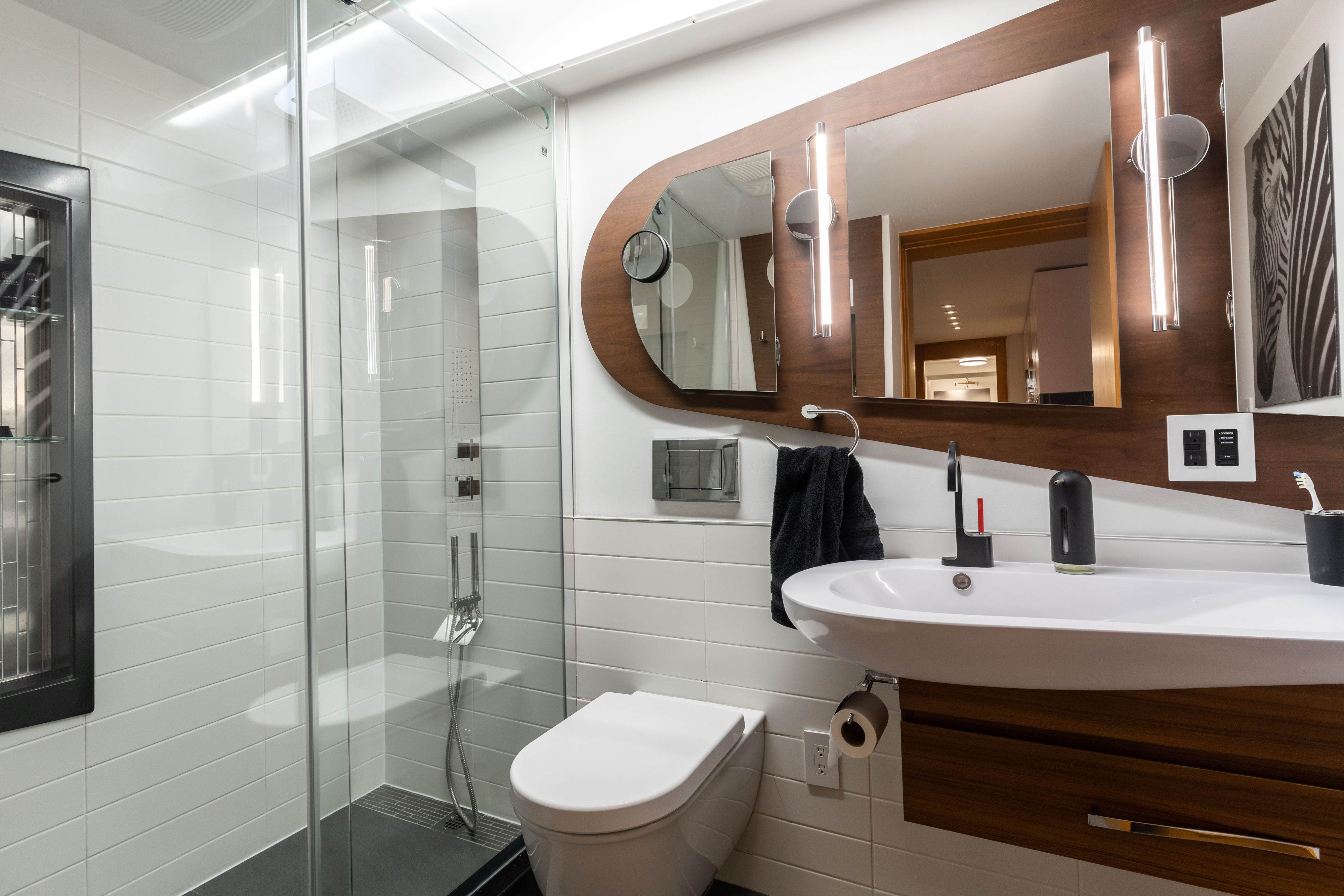 The back patio is heated granite (just like the driveway): 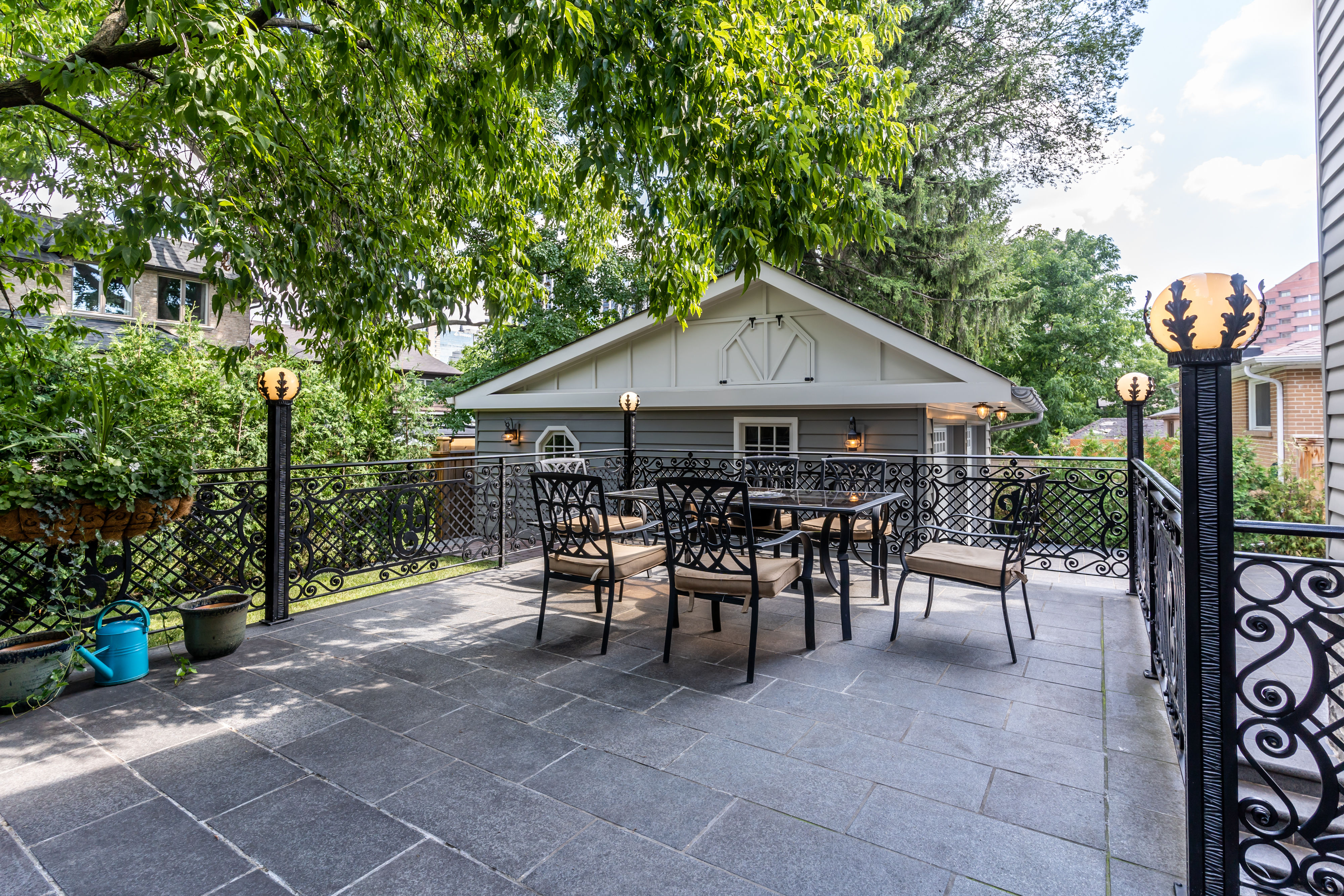 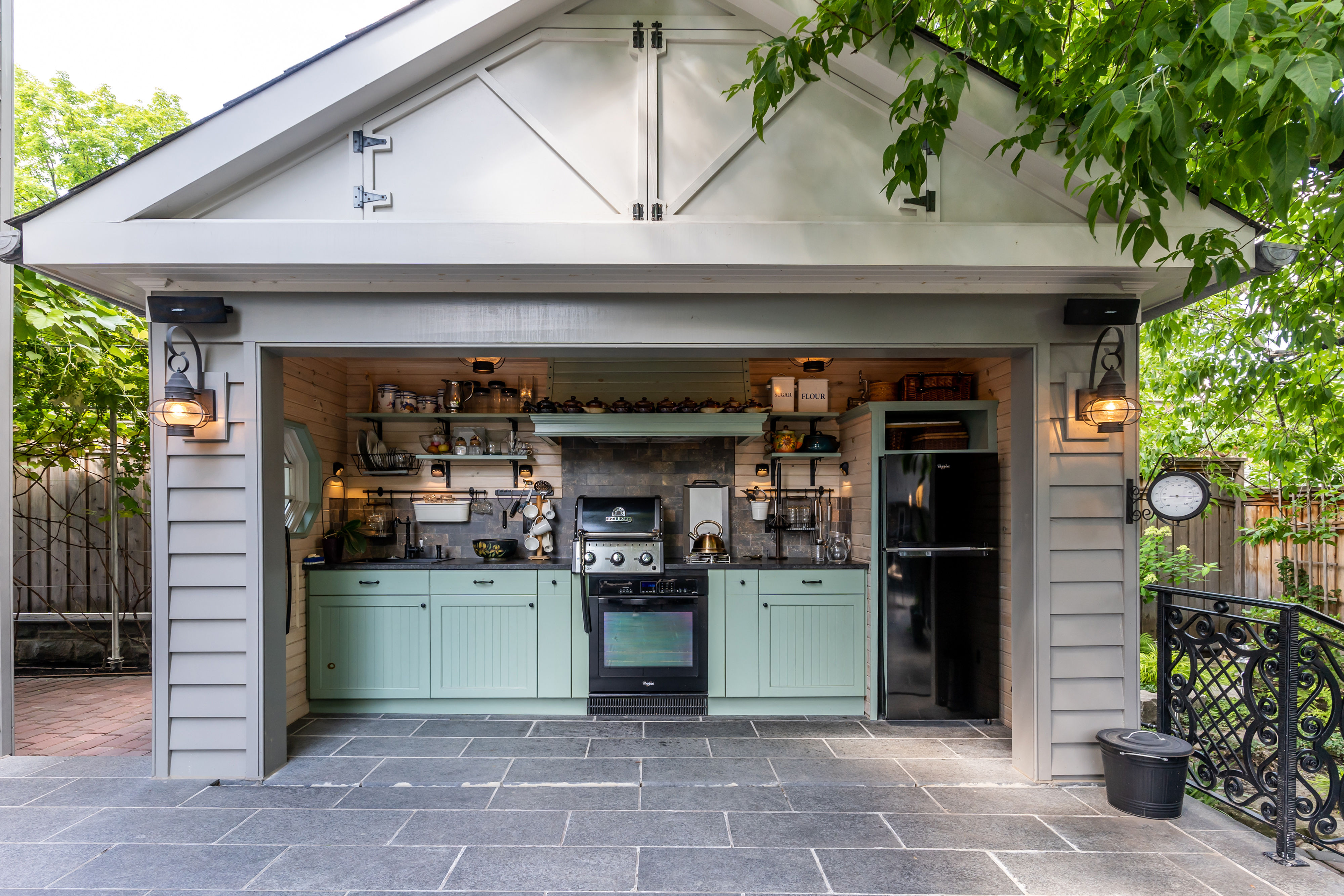 The five-seat basement movie theatre, an attractive feature for buyers hoping to binge-watch their way through winter lockdown.