“Gabriel wanted a quiet street where he could play hockey, Beatrice wanted a bigger bedroom”

Who they are: Emily Martin-Johnson, a nutritionist and chef, and Michael Johnson, an insurance professional, both 47, and their 12-year-old twins, Gabriel and Beatrice.
Where they lived in Toronto: A rented three-bedroom townhouse in East York
Where they live now: A four-bedroom detached home in Kingston

Michael: Emily and I met in 1991 when we were auditioning for theatre schools. I grew up in Scarborough, she grew up in Kensington Market and the Beaches. We were working as actors—I was in theatre and film, she was in commercials and music videos. Then Emily got into food service and ended up working as a nutritionist and a chef. I wound up in insurance.

Emily: In 2002, we bought a little unrenovated two-bedroom home in Leslieville, for $172,000. We made it nice, putting in a new kitchen and turning the basement into an apartment. A few years later, we decided we wanted to have kids, but ended up needing to pay for IVF treatment. Back then, IVF wasn’t covered by the provincial government, so we had to sell the house to cover the cost. IVF sucks, it hurts, it’s expensive and there’s no promise of success. It removes all the fun and excitement of deciding to start a family. I was an only child, so was Mike, and we both wanted more than one kid. We ended up having twins: it was pretty magical.

Michael: The renovations added $85,000 to the value of the Leslieville house, so there was some money left over after the IVF. We moved to a rented townhouse in East York, right near Danforth and Pape. Toward the end of Emily’s maternity leave, we realized the cost of child care for two kids would be more than half of our take-home income. We thought, This is insane, it’ll be cheaper for one of us to stay home. We figured once Emily went back to work, we’d get back into the real estate market.

Emily: But by the time that happened, in 2011, the market had exploded. Instead of being able to get back in at $300,000 or $400,000, we needed close to a million dollars to buy, so we just decided to rent. In early 2019, our landlord said she needed the house back. She gave us a year’s notice, but the rental market was unaffordable, too. We would’ve had to double our rent even if we downsized, and many of the viewings we went to ended in bidding wars. I left one in tears.

Michael: We had a nest egg from the sale of the house and our savings, so we had pre-approval for a $410,000 mortgage. We resigned ourselves to the idea we might always be renters in Toronto, but thought maybe we could get an investment property somewhere, something that would pay for itself, create some equity and generate some income.

Emily: We realized we would get more bang for our buck if we bought more than an hour and a half’s drive outside of Toronto, since it’s too far for most people to commute, so prices drop considerably. We visited friends in Kingston for a night and they showed us around. We did a bit of a pub crawl, sat on a great patio on top of Jack Astor’s, which overlooks city hall, then went to Beers for Queers Karaoke at Montes. We had a great night out and thought, Okay, maybe we want to consider more than just investing here.

Michael: We looked at Kingston properties online to see how far our money could go. That’s when we started seriously considering moving out of the city. But we also had to check with the kids. We asked them what was important to them if we moved. Gabe wanted a quiet street where he could play hockey, Bea wanted a bigger bedroom.

Emily: We saw five houses in Kingston. We put in an offer of $390,000 on a four-bedroom detached home on the west side. It’s a late-’60s split-level with a big backyard and a pool. Our offer got accepted right away, since we weren’t fighting with 12 other people, like we might’ve been in Toronto. We finally moved in in late 2019. We have three living spaces, including a big rec room in the finished basement, lots of storage and a laundry room. Finally, I have a real kitchen to cook in. I left my job in Toronto at South Riverdale Community Health Centre, which I loved, and I’m still looking for a new one. But there’s no rush, we can take a deep breath here because we’re not scrambling to pay rent. I can see the whole sky out of my living room window and look at the sunset while Gabe plays road hockey. 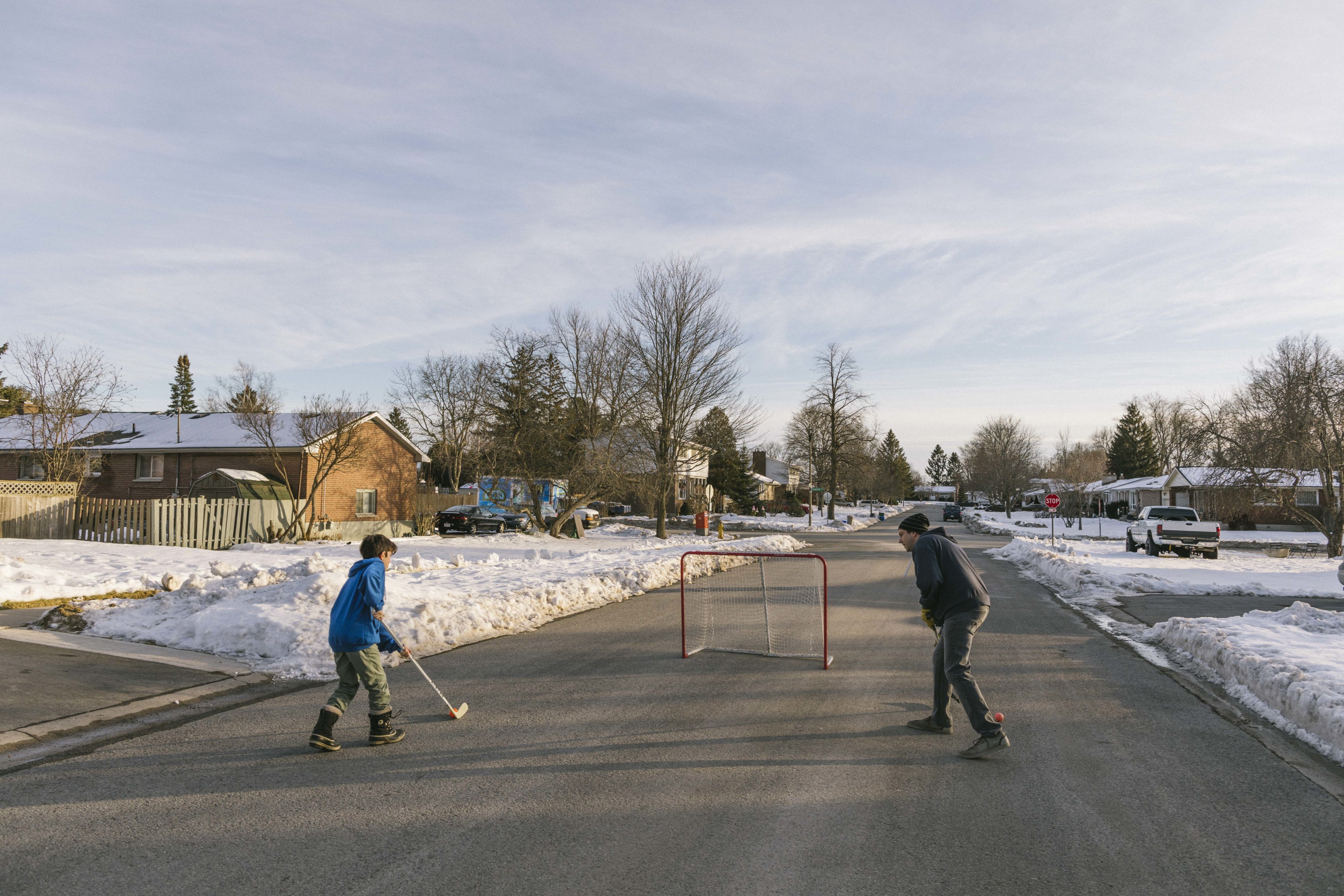 Michael: A lot of my work can be done remotely, so I negotiated to work from home three days a week. I go into the Toronto office on Thursday and Friday. I drive down around 6 a.m. on Thursday, stay with friends and drive back Friday night. I’ve been playing men’s league hockey on Thursdays for 12 years, so I can keep that up, too. The commute usually takes about two hours: I’m actually on the road less each week now because I don’t get stuck in traffic on the Don Valley Parkway.

Emily: I can’t believe how easy it was. We thought we’d never leave Toronto, but we already love it here. We aren’t missing anything, except for our friends. We were in Toronto this past weekend because we had concert tickets, and I commented as we were driving downtown: “Were the houses always this close together?”