As president and, later, vice-chair of Hudson’s Bay Company, Bonnie Brooks helped transform the chain from a tired mall retailer into a national fashion brand powerful enough to swallow Saks whole. Although she resigned her role at the company in 2016, she still has a number of high-profile positions, including a seat on the board of Rogers.

In May 2017, Brooks closed on a condo that seems as though it would be perfect for someone with her business clout: a $2.2-million luxury suite at 77 Charles Street West, an upscale condo tower near Bay and Bloor with 24-hour concierge service. She’s not planning on staying for much longer, though. Last week, she put the place on the market for $2.395 million, about $200,000 more than she paid.

Although the unit is a two-bedroom, it’s larger than most two-bedrooms, with more than 1,700 square feet of living space and a 60-foot balcony. It has engineered hardwood flooring, Poliform shelving and a kitchen by Downsview Kitchens. The building is perched atop Kintore College, a limestone all-female residence for University of Toronto students.

Brooks’s agent, Sarah Giacomelli of Chestnut Park Real Estate, points out that the unit’s relatively high maintenance fees ($2,533 per month, or about $1.50 per square foot) pay for some amenities that go well beyond what’s offered in typical condo buildings. “The service is impeccable,” Giacomelli says. “There’s a gymnasium. There’s a boardroom. And the care that is given to each individual owner is pretty amazing. I would describe it a bit like a hotel. If you were travelling and you forgot a dress, or your husband’s dinner jacket, they would go and retrieve something out of your suite and put it in a limousine or send it to you.”

As for why Brooks is selling after less than a year: Giacomelli says Brooks is looking for a new place to live, but not because she dislikes this unit. “She does this,” Giacomelli says. “She loves projects. She loves changing or altering properties, or doing them up. And then she has her eye out for another project.”

The chandelier in the living area is by Bocci: 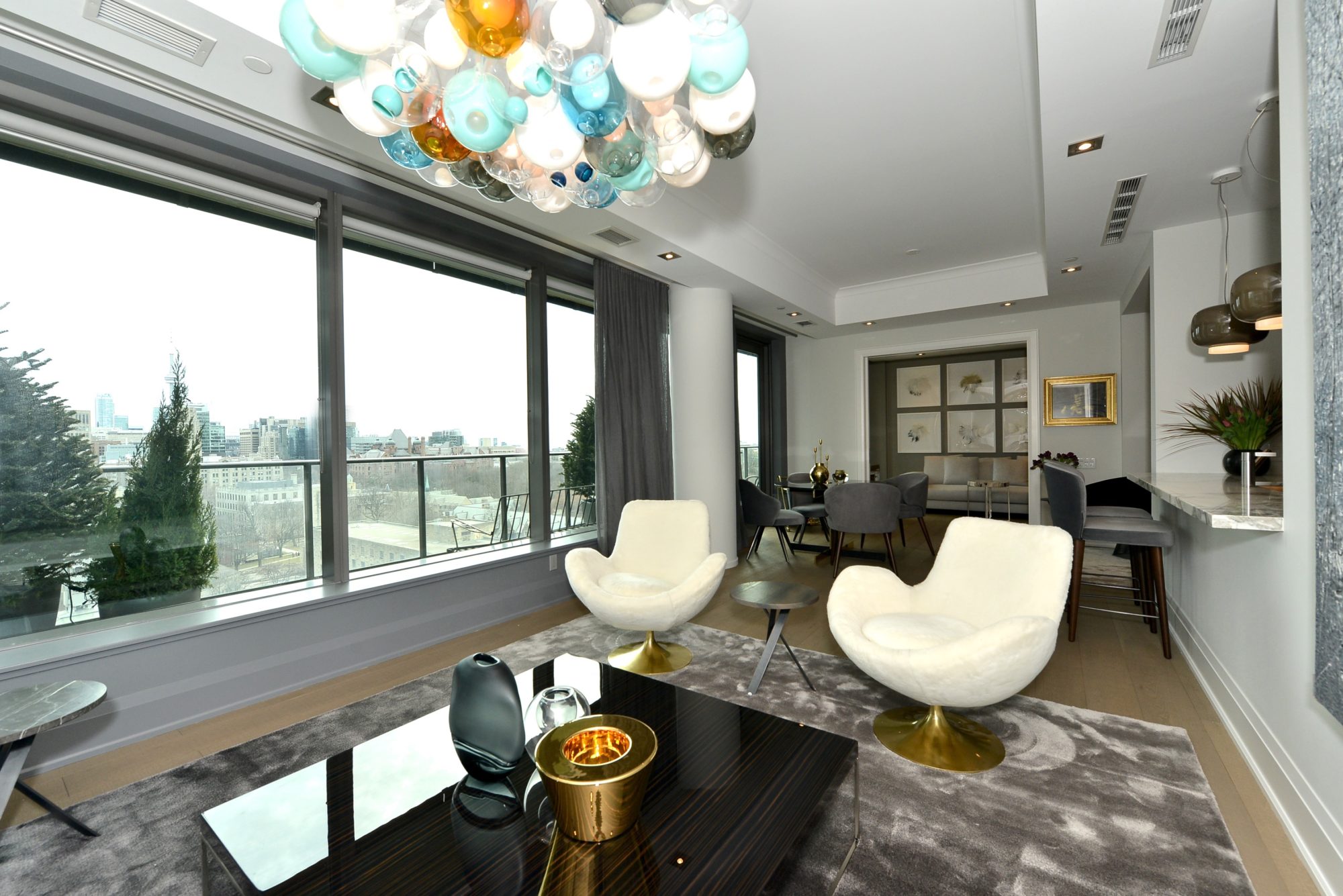 Here’s a view of the kitchen and dining area: 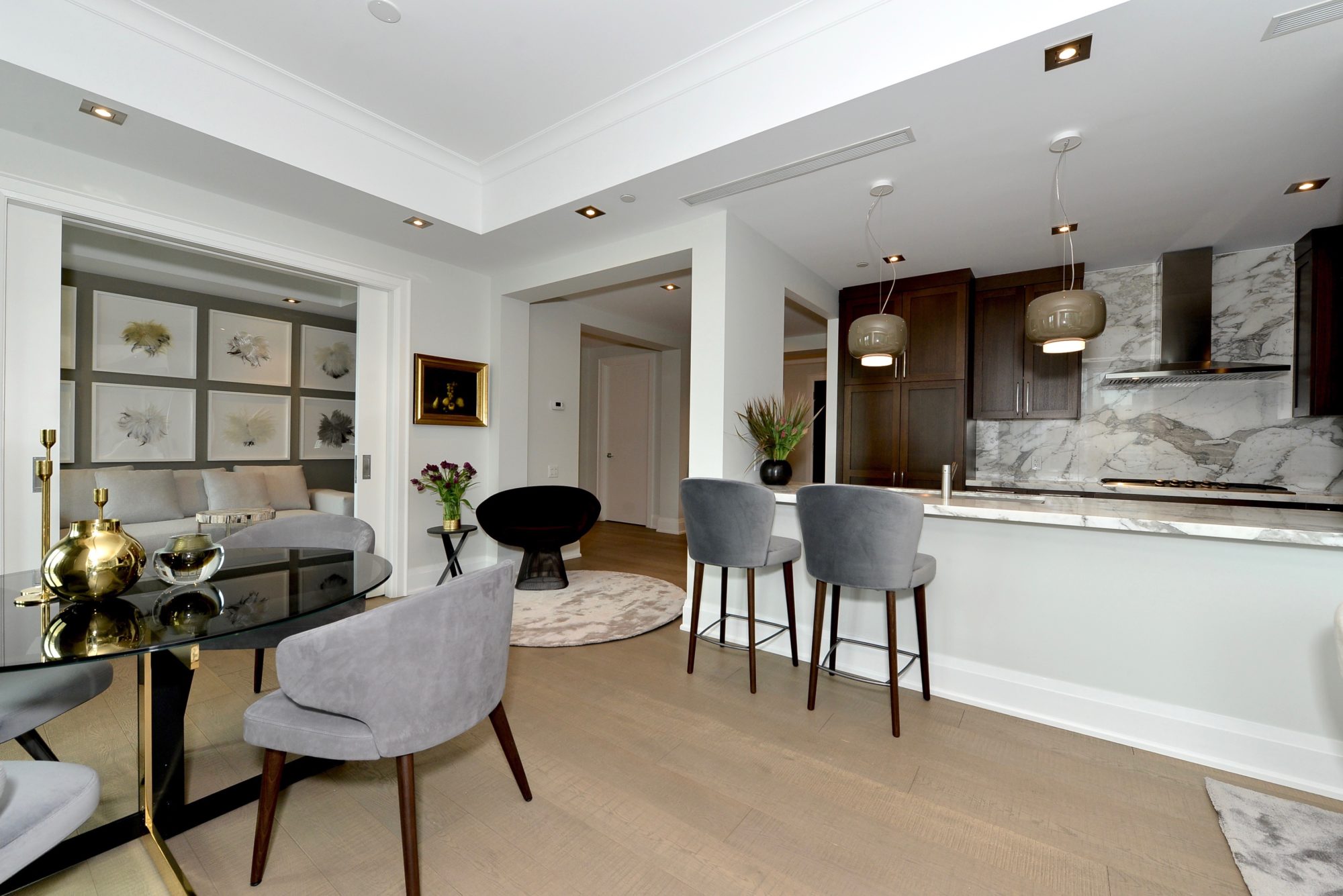 There’s a bit of den space: 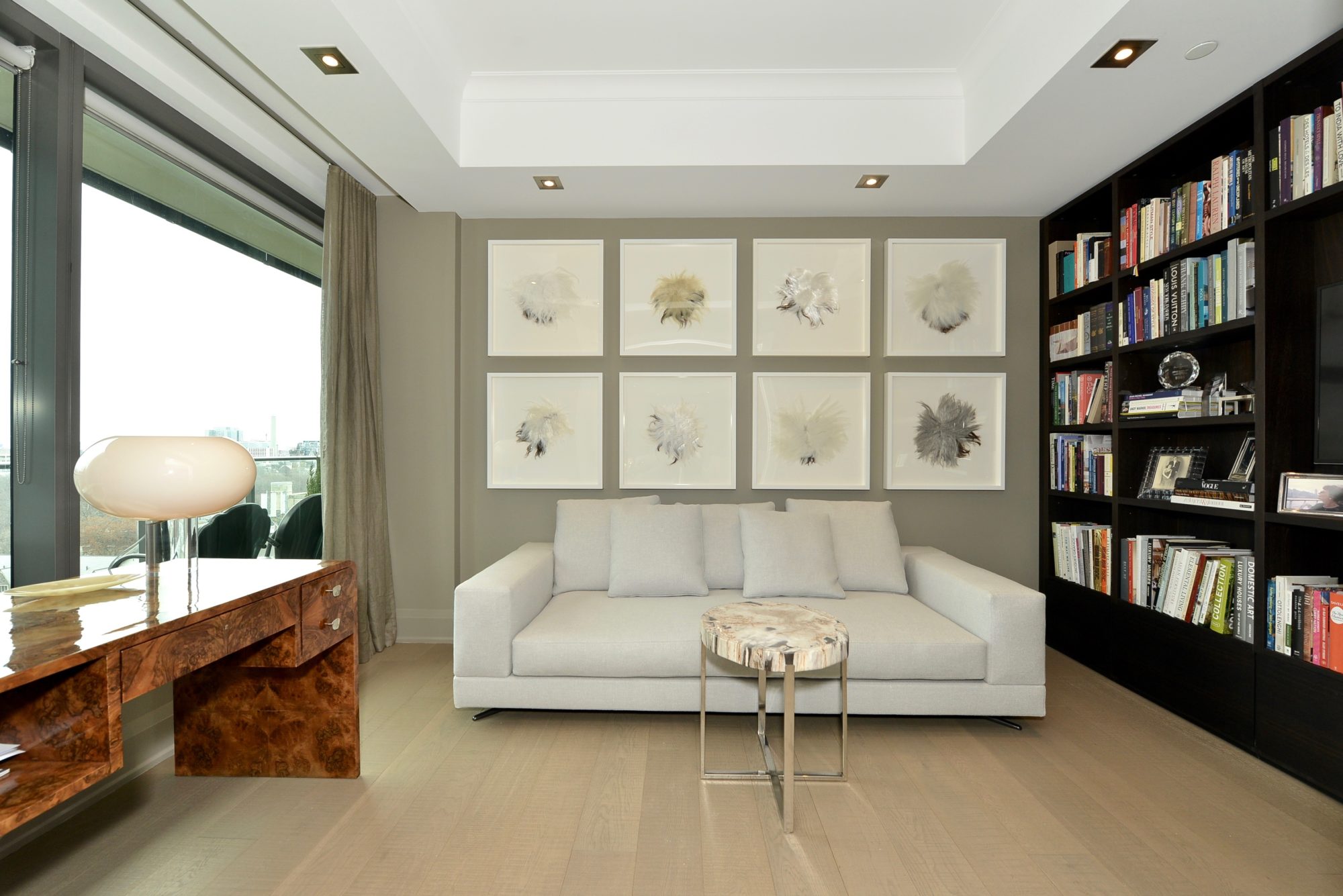 The artwork in the master bedroom is by the Chinese artist Chen Yu. “Bonnie was in Hong Kong for a long time, working for Lane Crawford before she moved back to Canada,” Giacomelli says. “So a lot of her art pieces are Chinese works she brought back with her.” 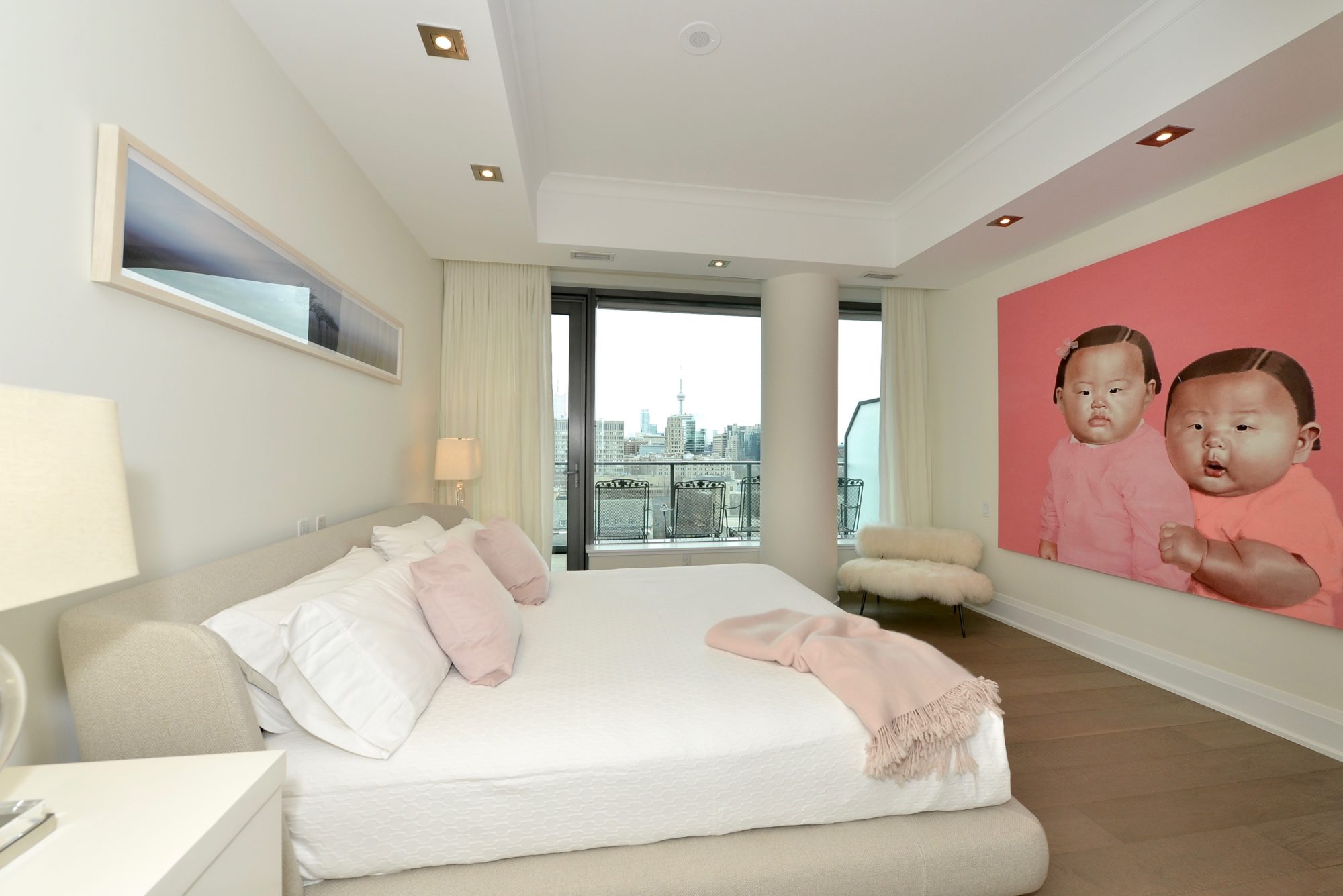 The balcony has a view of downtown: 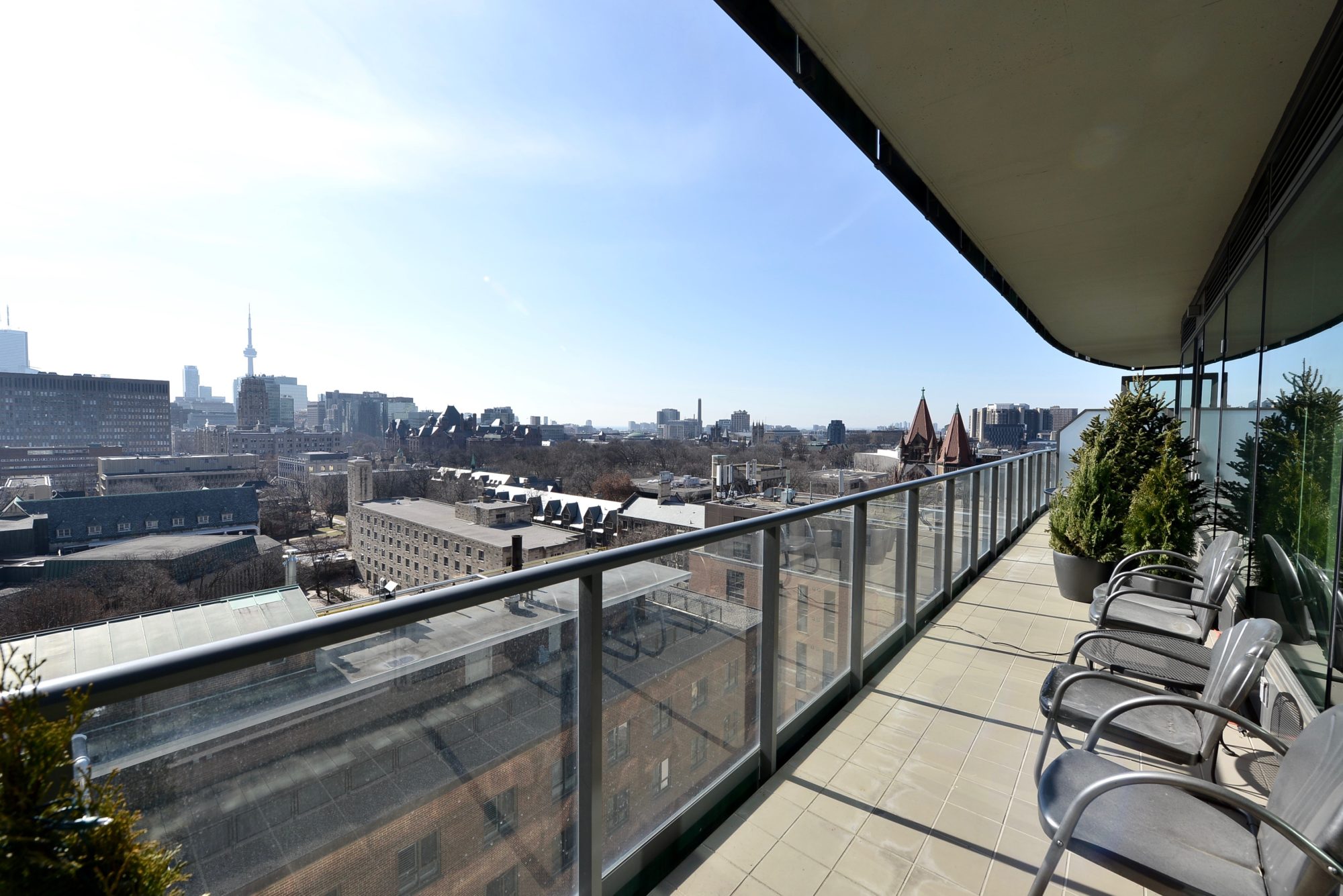