A first look inside the Toronto Trump Hotel’s replacement, the St. Regis

A first look inside the Toronto Trump Hotel’s replacement, the St. Regis

InnVest hired DesignAgency to spruce up the interior. The designers opened up the lobby to admit more light into what was formerly a dark and brooding room. A double-sided oak cabinet with polished bronze and fluted glass now separates the reception area from the Astor Lounge, which serves as an upscale café during the day and a wine lounge by night: 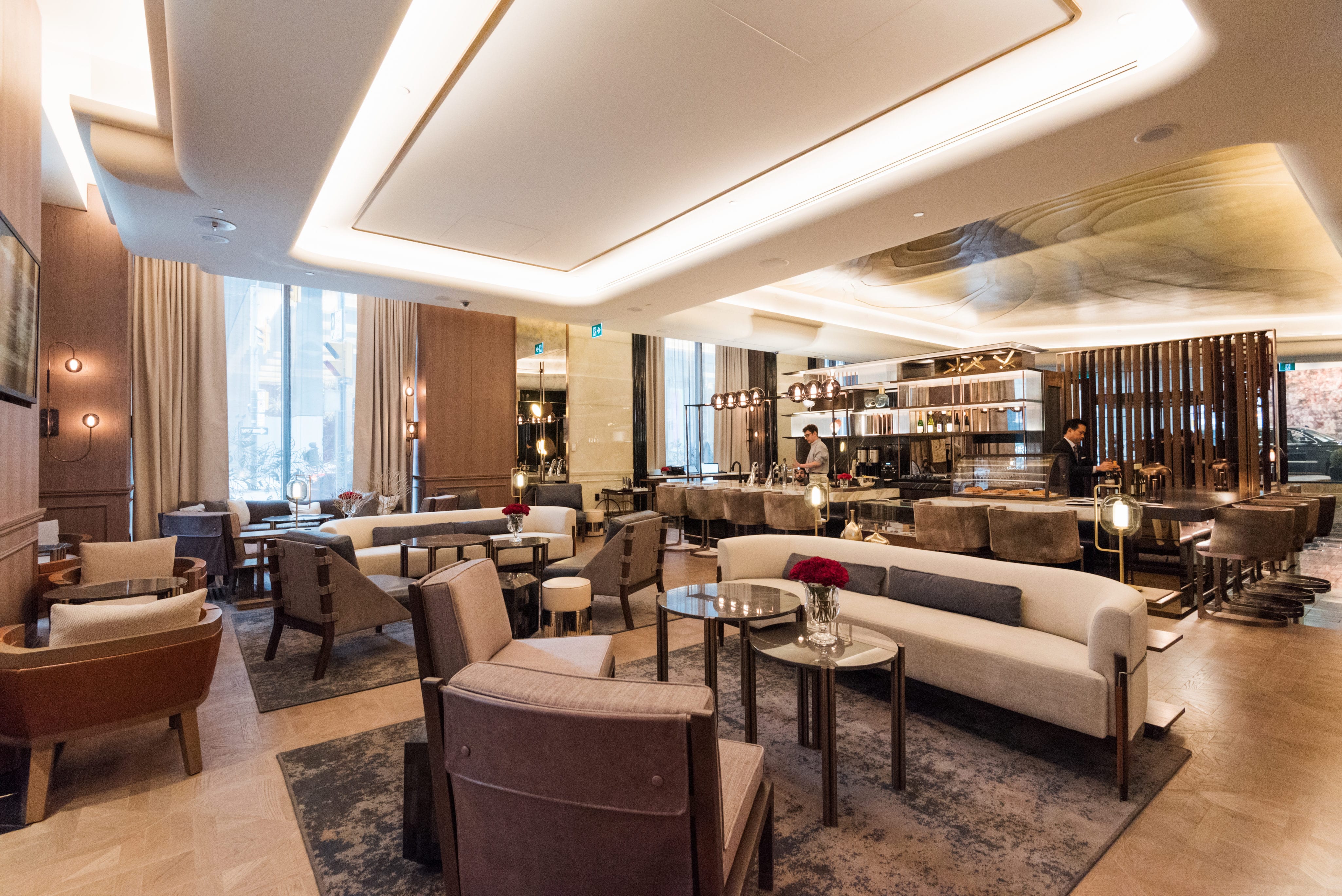 The hotel wanted the interior decor to feel Canadian. Many of the design details are nods to either Toronto or Canada. The lounge bar’s undulating wooden front, for instance, loosely references Georgian Bay’s rocky shoreline. The ceiling feature in the lobby, created by art studio Moss + Lam, abstractly references Ontario’s rolling landscape: 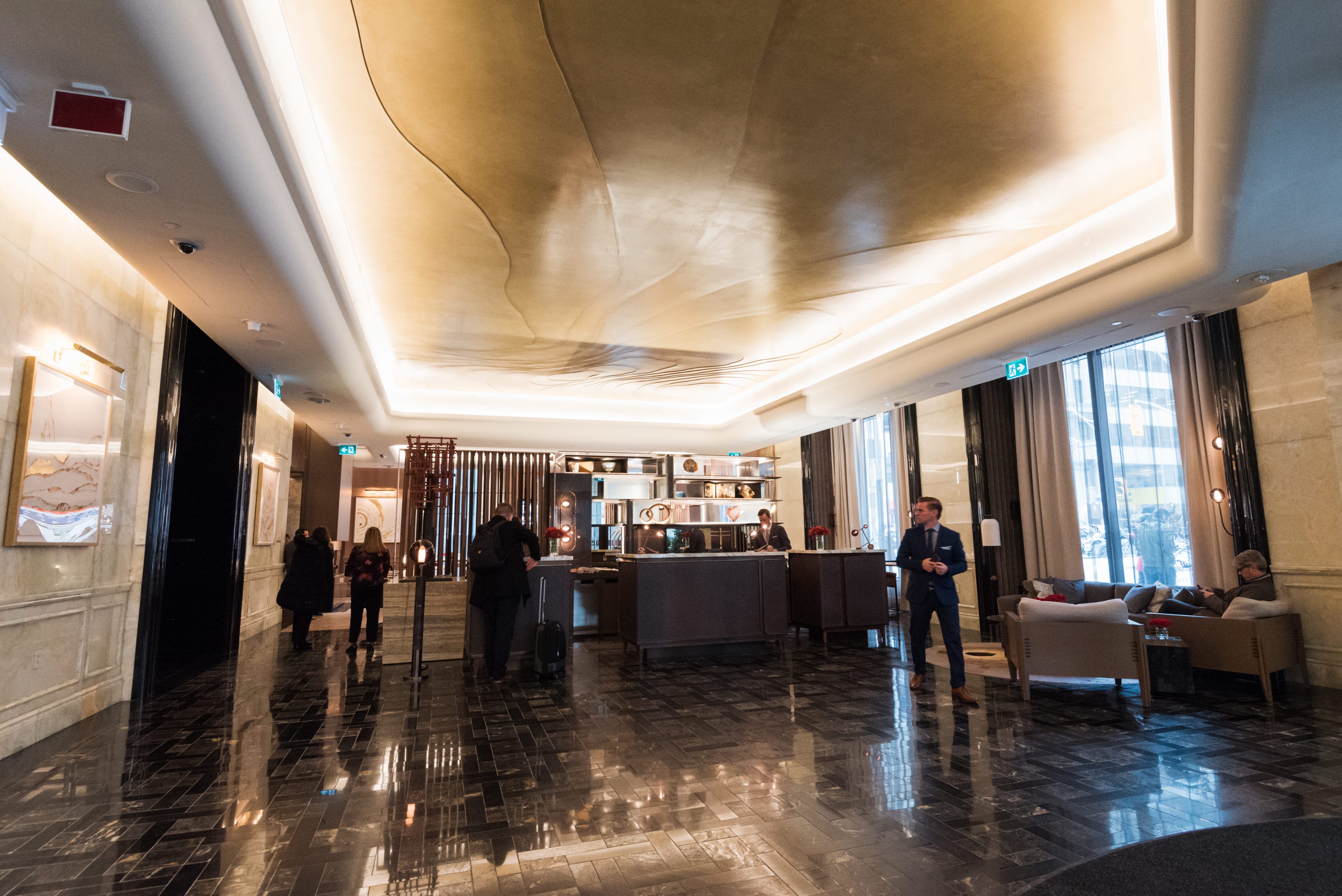 “One thing our guests can’t buy is time,” says the hotel’s marketing manager, Alex Marconi. “Our butlers are there to make their experiences seamless.” Butlers, who can be summoned through an app or with a quick phone call, unpack luggage, press clothes, book theatre tickets and take care of other planning tasks. At the end of each stay, they pack guests’ bags for them. And they have neat uniforms: 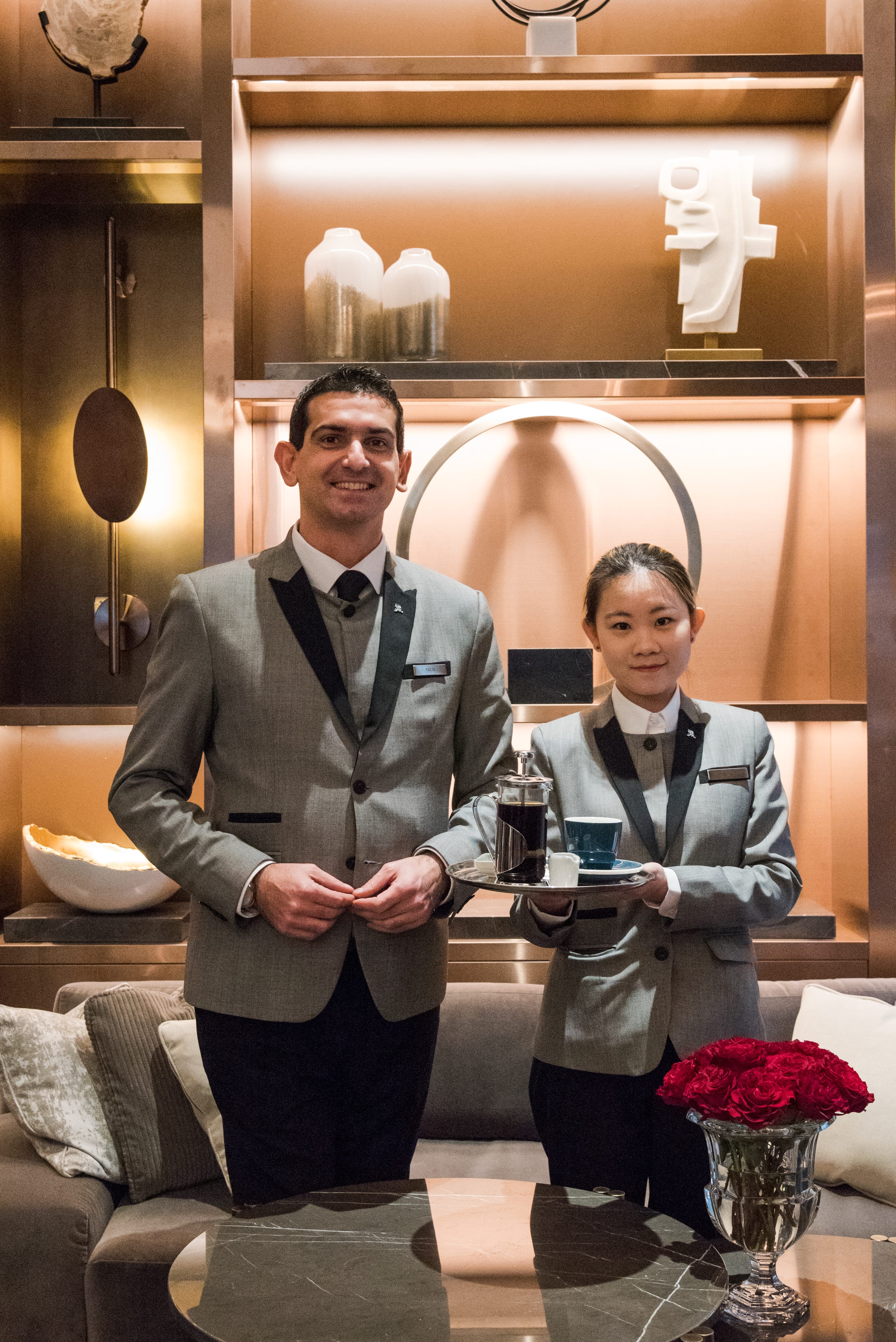 The St. Regis transformed two meeting rooms on the thirtieth floor of the hotel into two opulent penthouses. The sprawling Caroline Astor (1,675 square feet) and John Jacob Astor (2,035 square feet) suites were both designed by Chapi Chapo Design, who brought Canadian terroir into the bedroom. The patterns on the hand-knotted carpets reference glaciers, and the Rockies are reflected in the various marbles and that cover the walls, floors and full-sized kitchens. Black-and-white prints of 19th century railroad scenes hang on the walls, and metal details on the eight-person dining tables pull the visual metaphor into the rooms.

Here’s the living room in the John Jacob Astor suite: 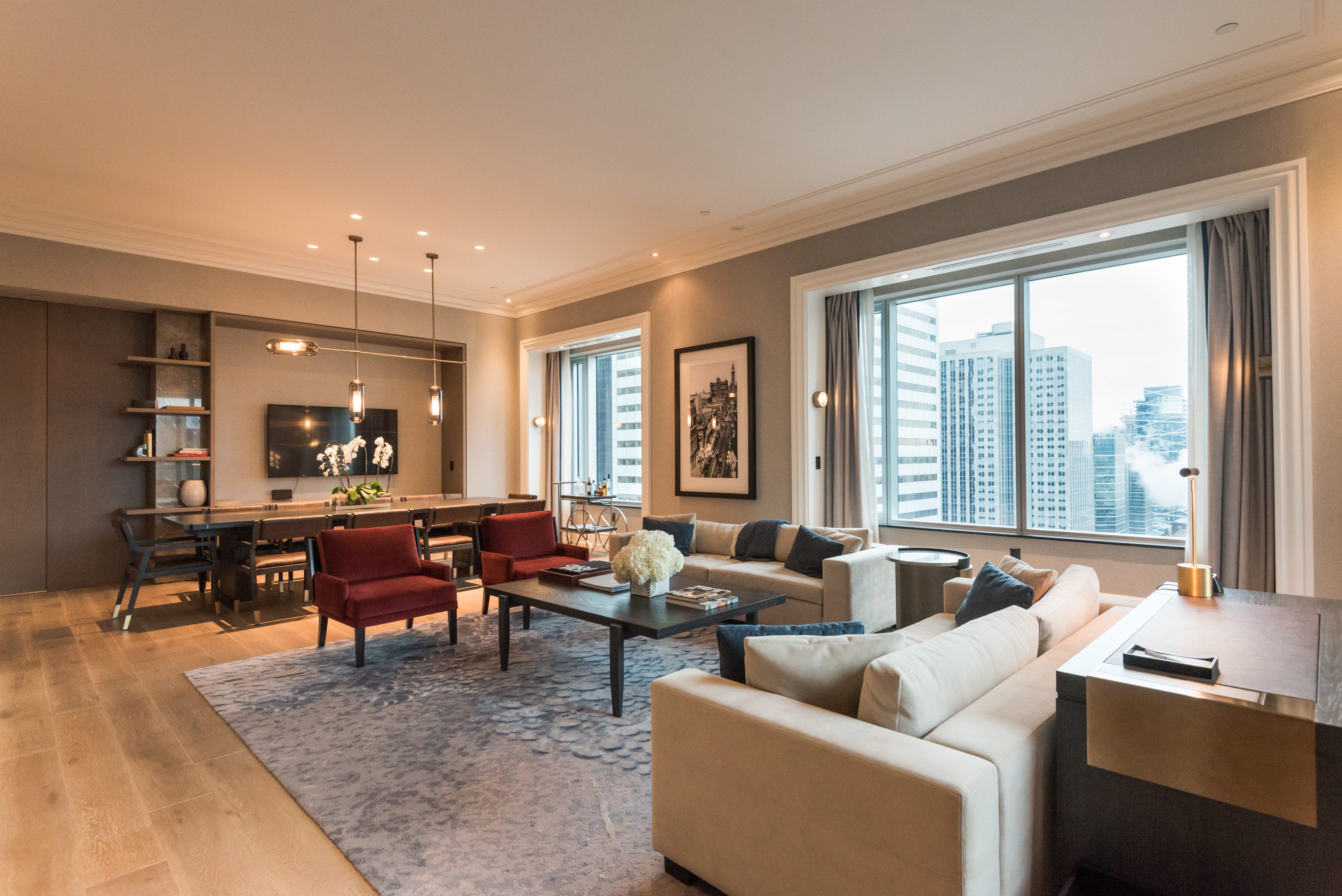 And here’s one of the bedrooms: 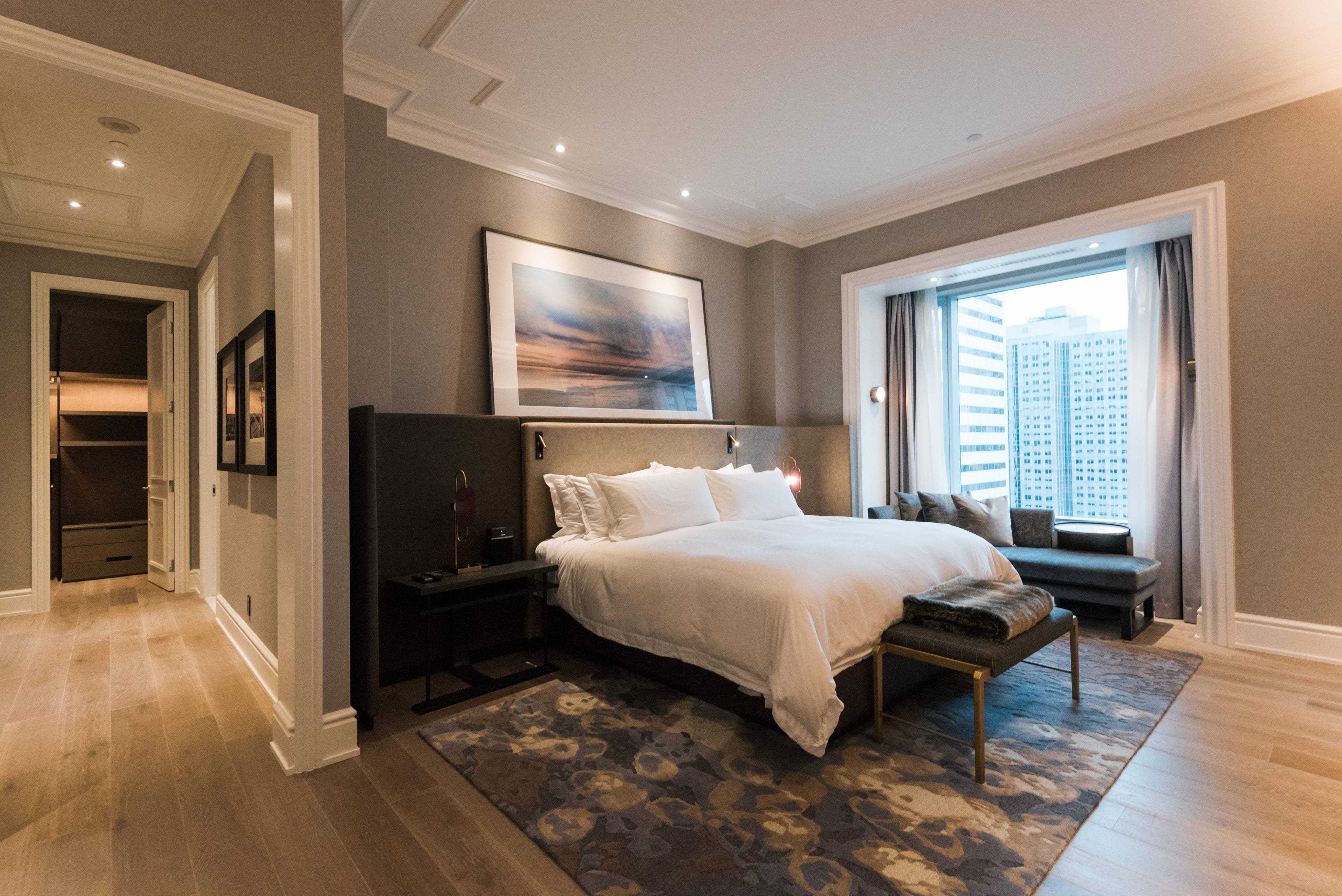 And here’s the kitchen in the Caroline Astor suite: 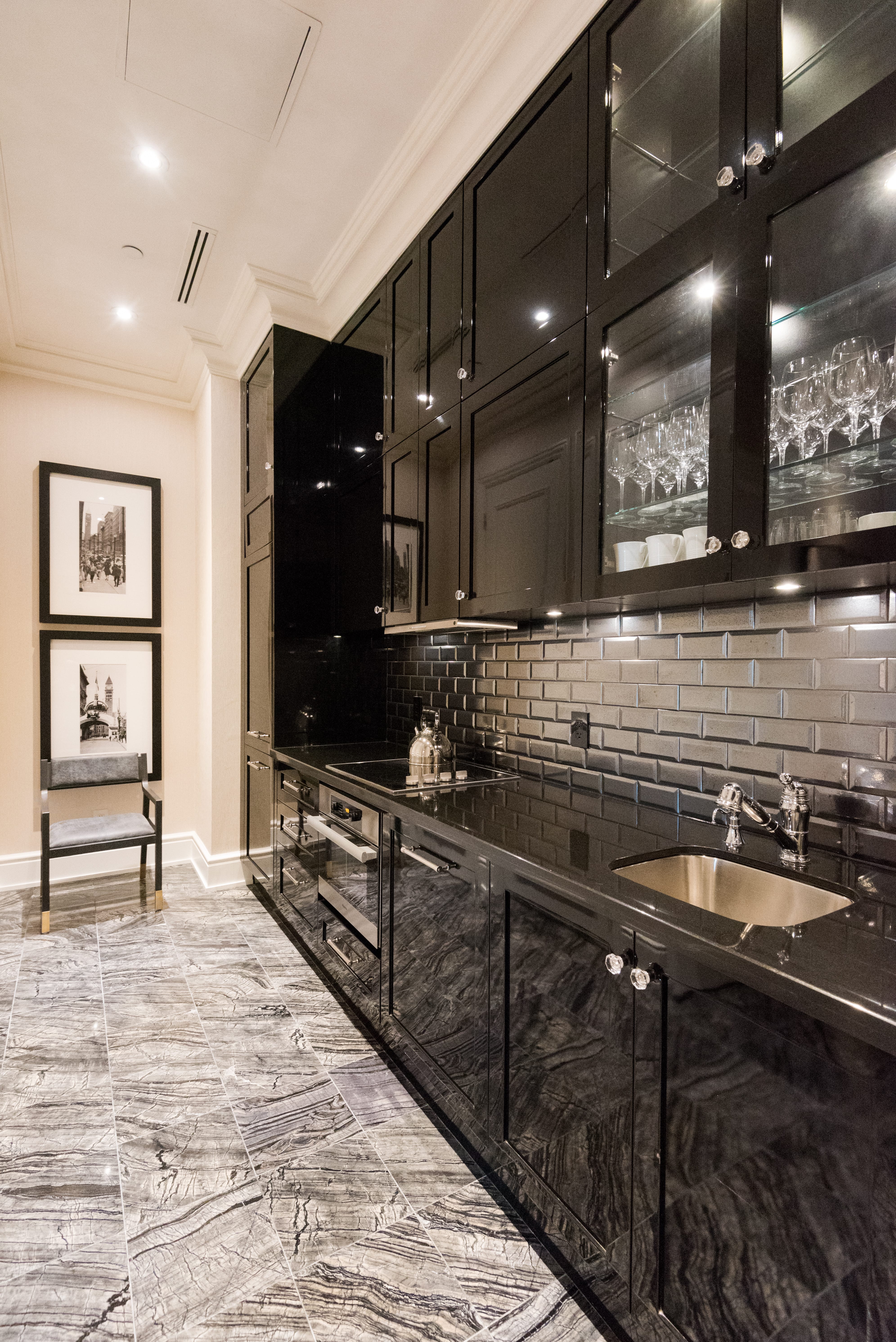 And the living area: 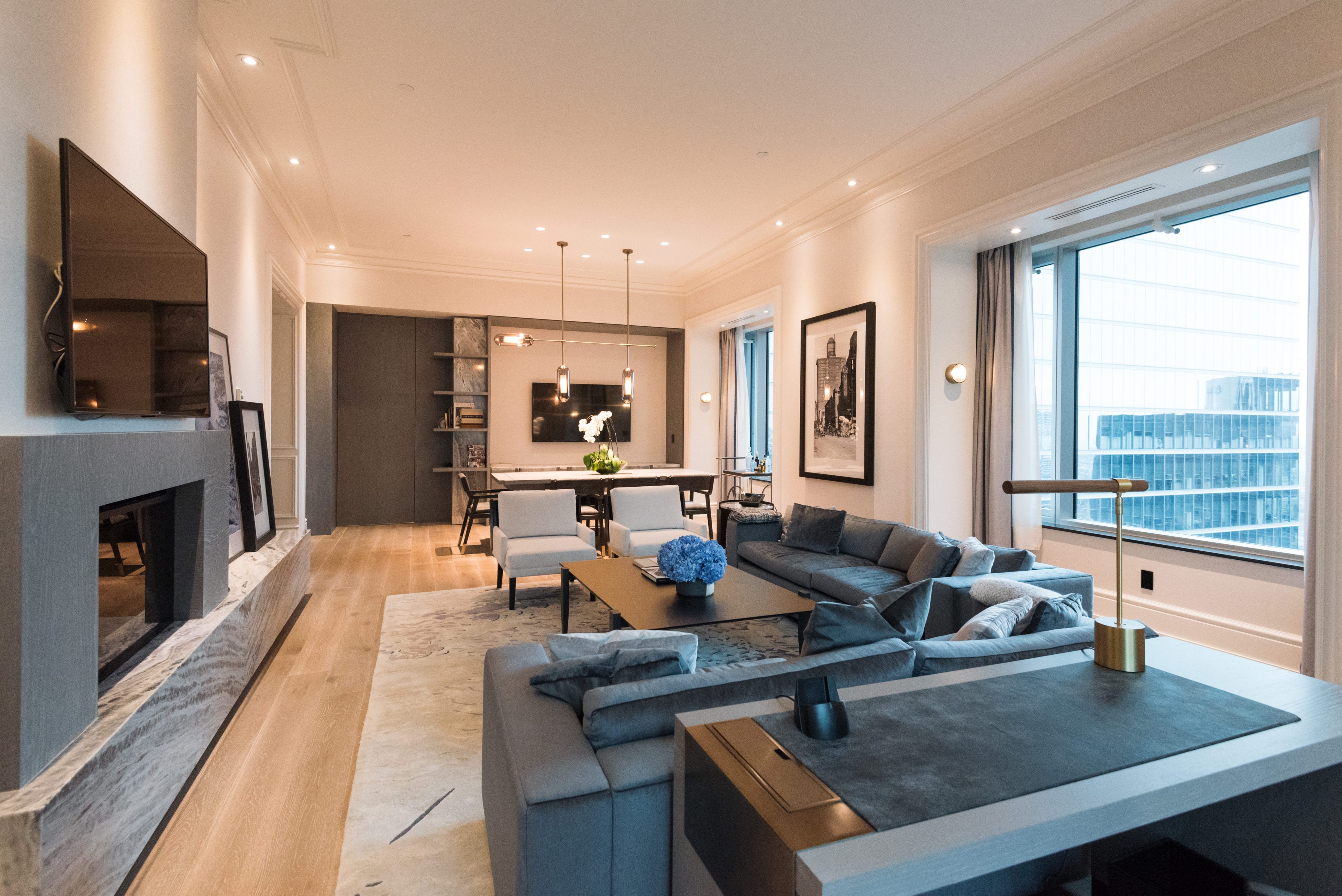 The master bathrooms in these top suites are outfitted with soaker tubs, rainfall showers, mirror-set TVs, heated floors and luxe Aesop toiletries. (Standard rooms come with Laboratoire Remède products, which are made with essential oils.) 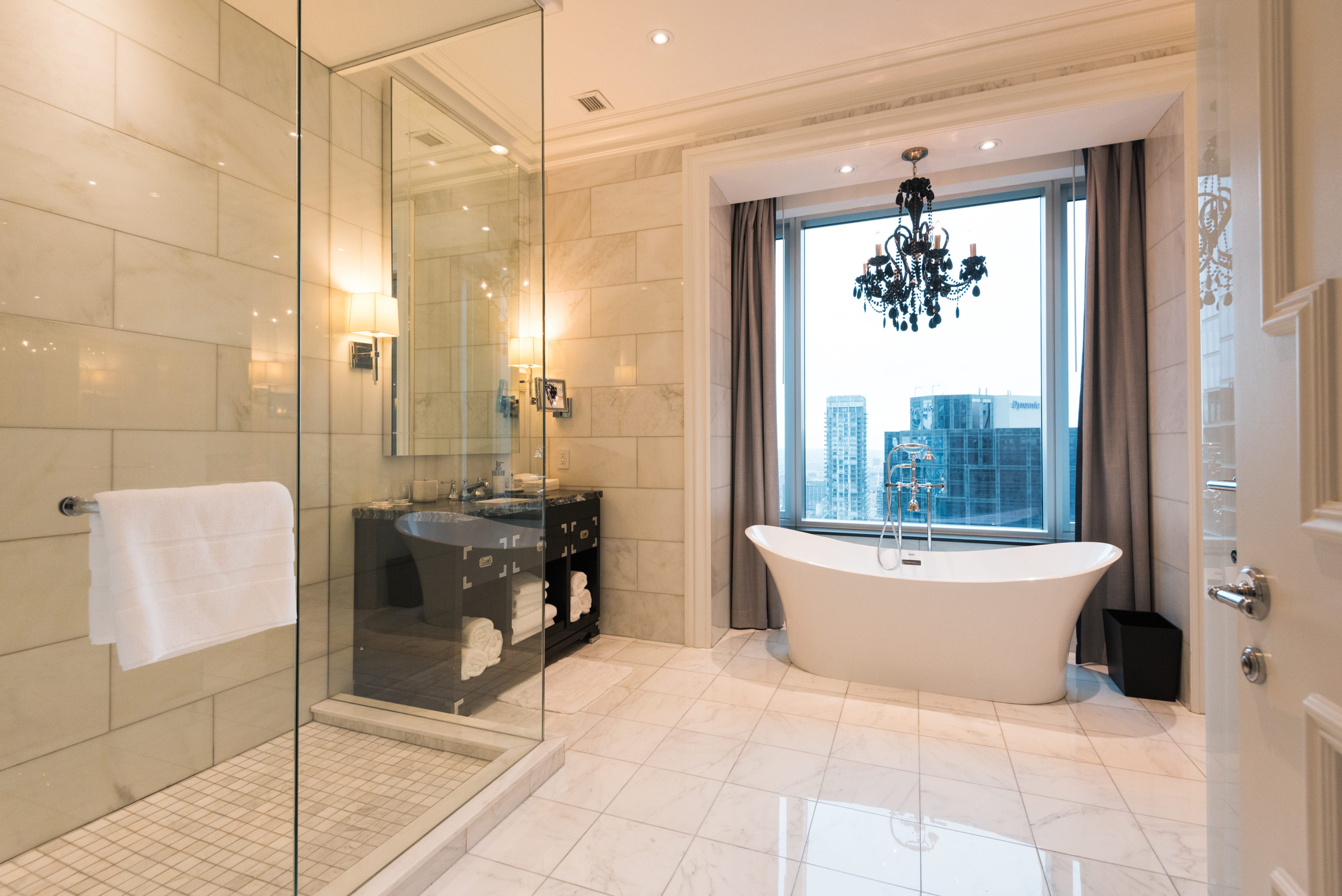 There are 258 hotel rooms, 124 of which are suites with separate living rooms. Even normal, single rooms are a spacious 550 square feet (making them, at least according to St. Regis management, the largest standard-sized rooms in Toronto). All rooms have touch panels that control things like the lights and curtains. 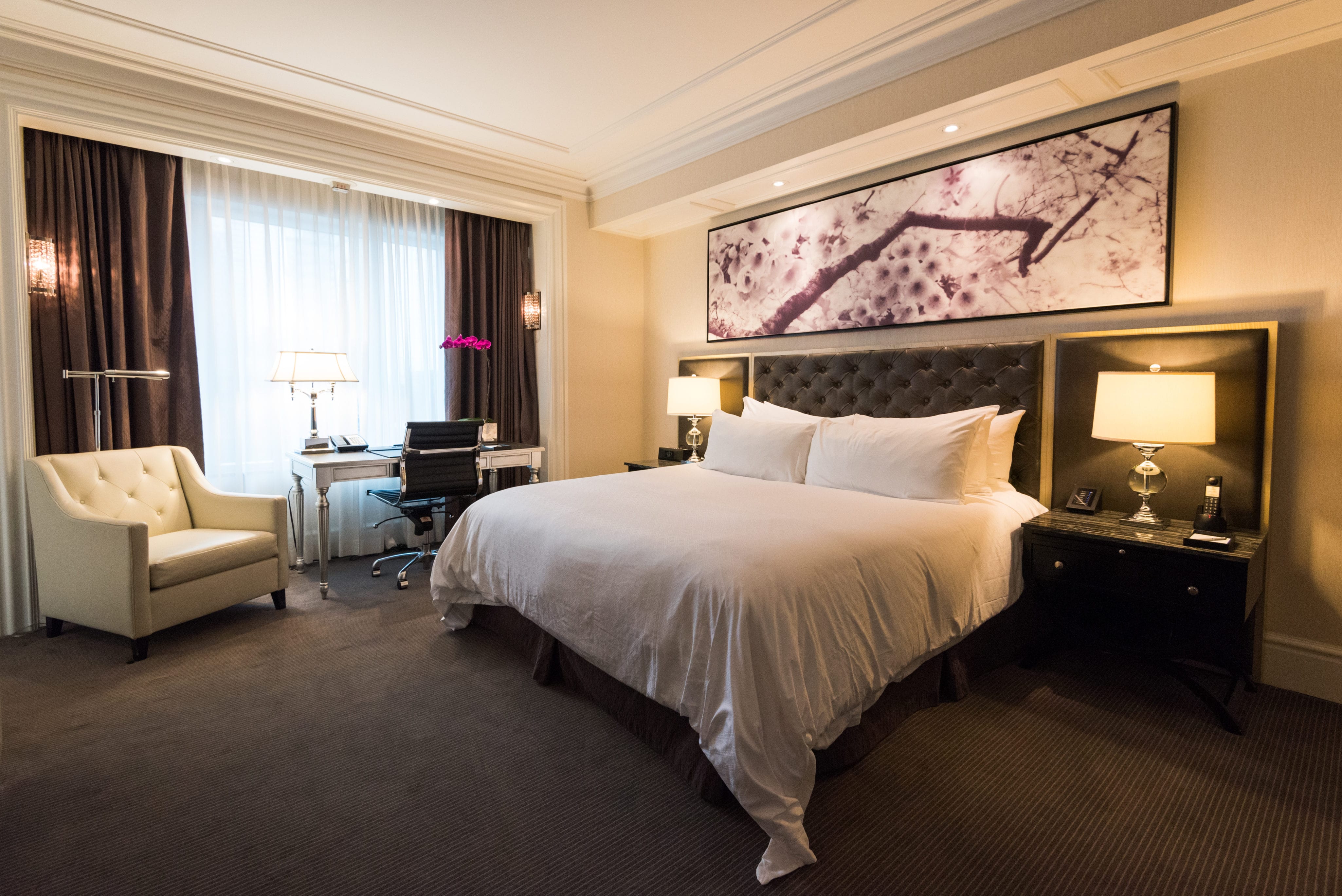 The spa, on the 31st floor, can be rented out for parties in the evenings: 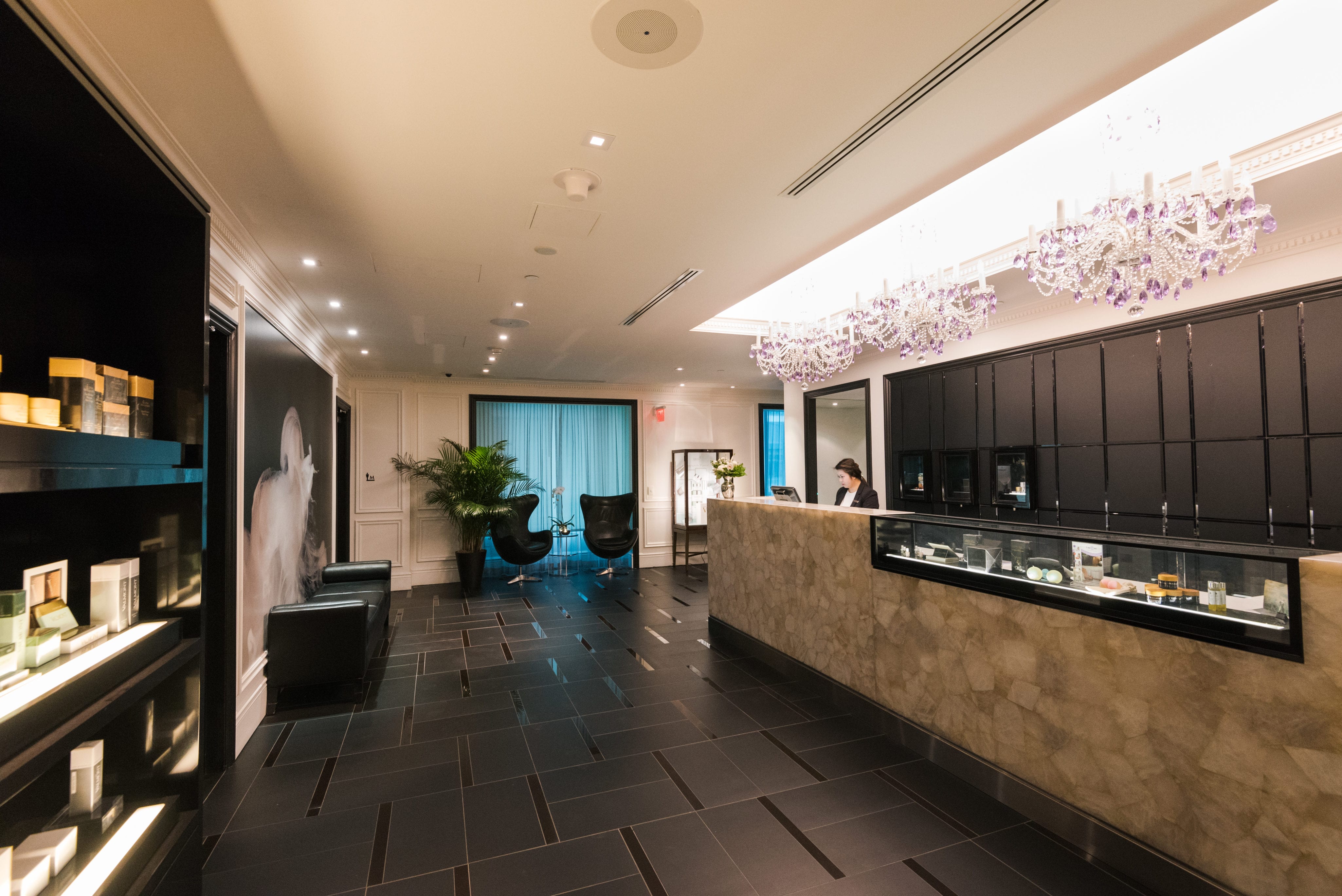 Louix Louis, on the 31st floor, is a grand bar and restaurant in the style of the majestic hotel bars that defined New York high society in the early 20th century. (The space was formerly the notorious America restaurant.) DesignAgency decorated the 130-seat room to look like the inside of a whisky glass. The ceiling, painted by muralist Madison van Rijn, is meant to look like a swirling libation: 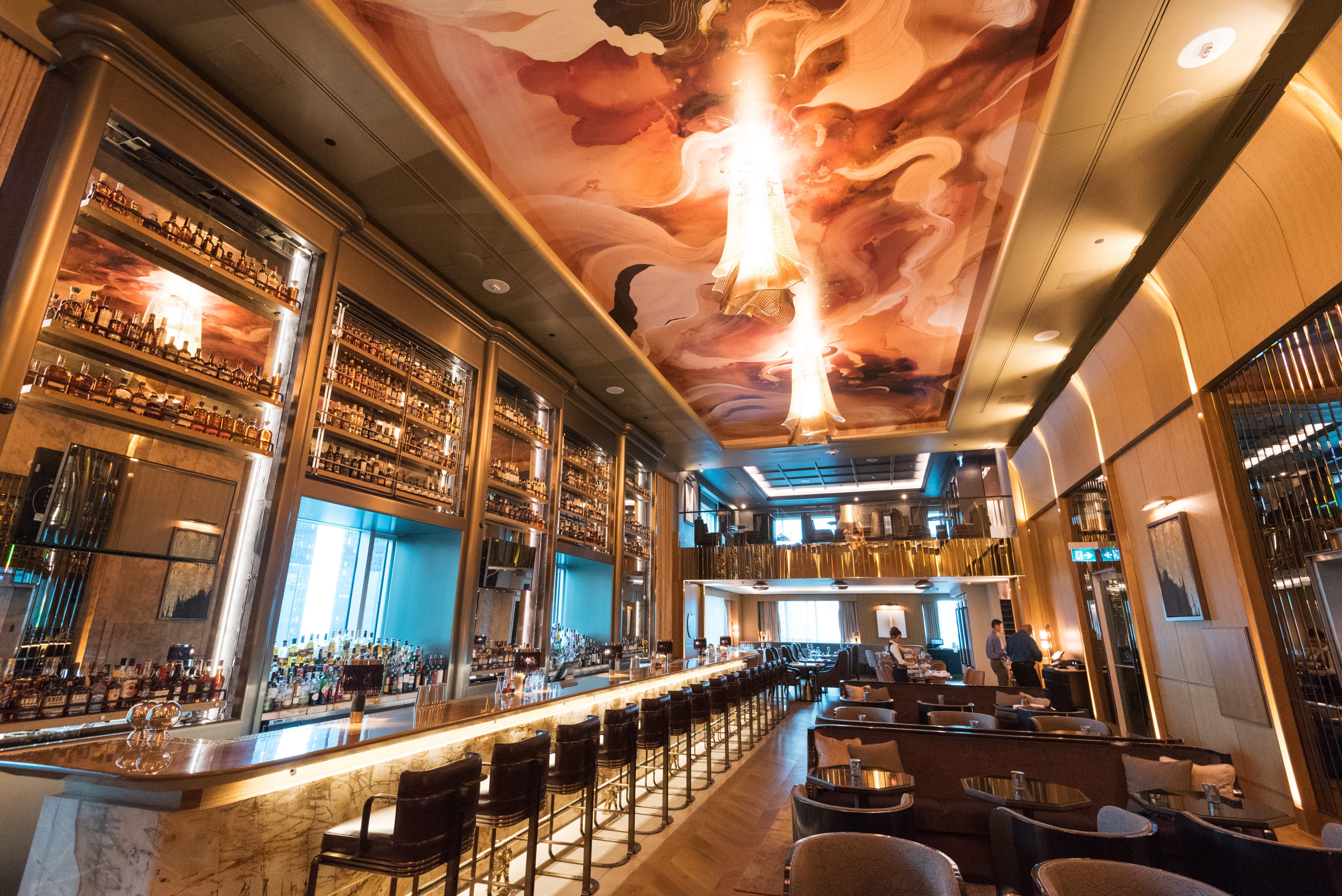