Jamil and Femina Asaria didn’t plan to live above their workplace; it just kind of happened. They bought a two-storey furniture store on Davenport Road in May 2016, thinking they’d transform it into Face Toronto, their boutique plastic surgery clinic, where Jamil performs facial procedures for an upscale clientele and Femina is the director of ­operations. The space was massive, though—too big, they ultimately decided, for their business. So they wondered, why not live upstairs?

The idea was particularly appealing to Jamil. He gives lectures around the world. When he’s home, he likes to maximize his time with the couple’s kids, 5-year-old Rayn and 2-year-old Kayden. A second-floor residence would reduce his commute time to near zero.

They hired architect Gianpiero ­Pugliese, of Audax, to lead the renovation on both the clinic and the residence. They gave him a list of wants, including a double-sided granite fireplace, a tucked-away butler’s kitchen, hand-cut tiles in the bathroom, an open-air patio and a walk-in closet. Construction lasted 16 months.

The 3,900-square-foot flat draws its inspiration from Italian design: the entry has Venetian-made door knockers and the bedroom is lined with silk Armani wallpaper. The marble-­everything master bathroom was a three-month construction project unto itself.

Now, with their residence completed, the benefits are everything Jamil and Femina had hoped for. Rather than cramming into subway cars or jostling for space on congested highways, they ride a private elevator directly to the office.

The banquette makes a cozy breakfast nook. The bowl on the counter is fashioned from a hollowed-out tree root that has been dipped in gold: 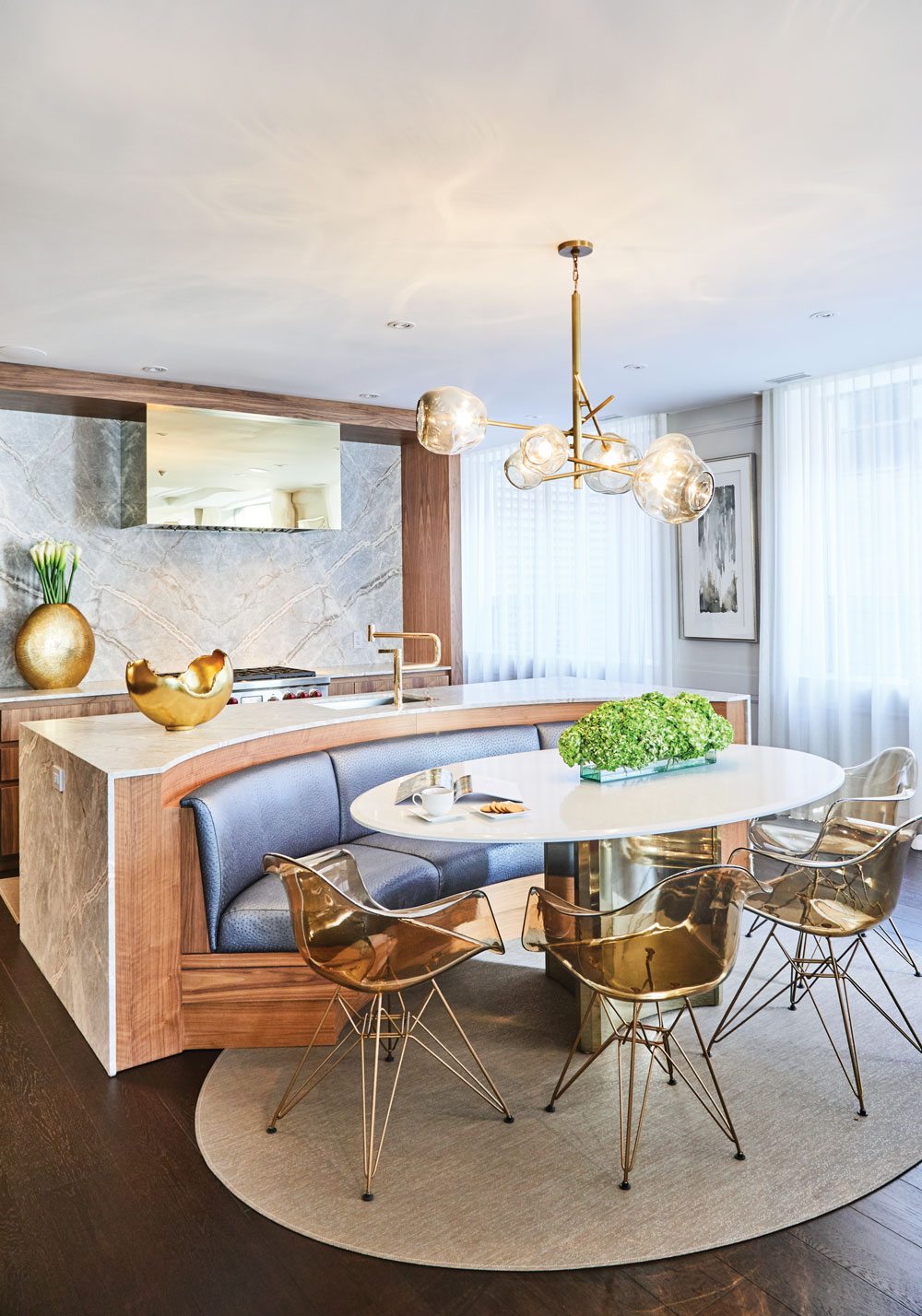 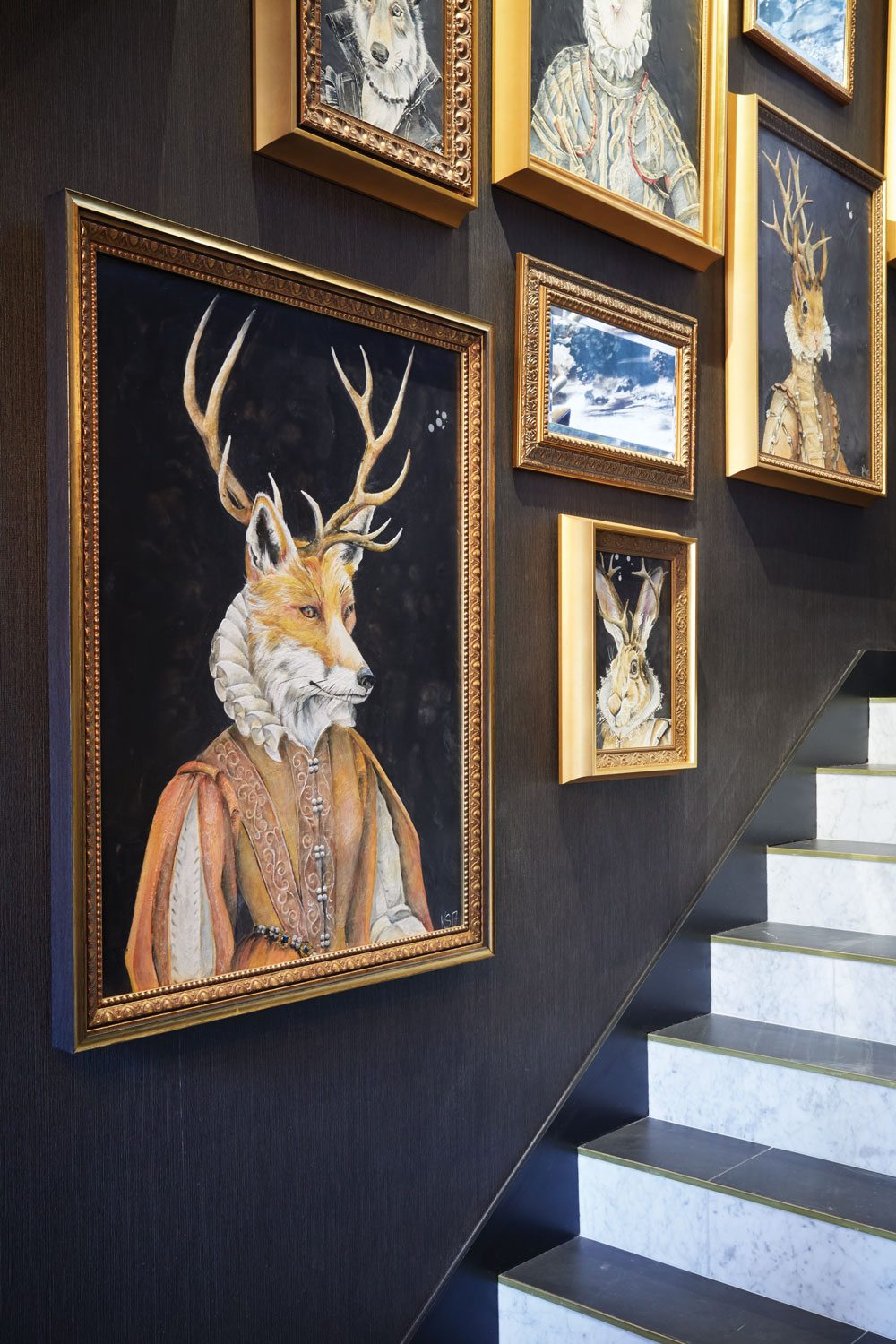 Femina facetiously calls Jamil “the Indian Valentino,” but their shared walk-in closet is no joke. Jamil uses the custom-made glass-topped dressing table to display his accessories: 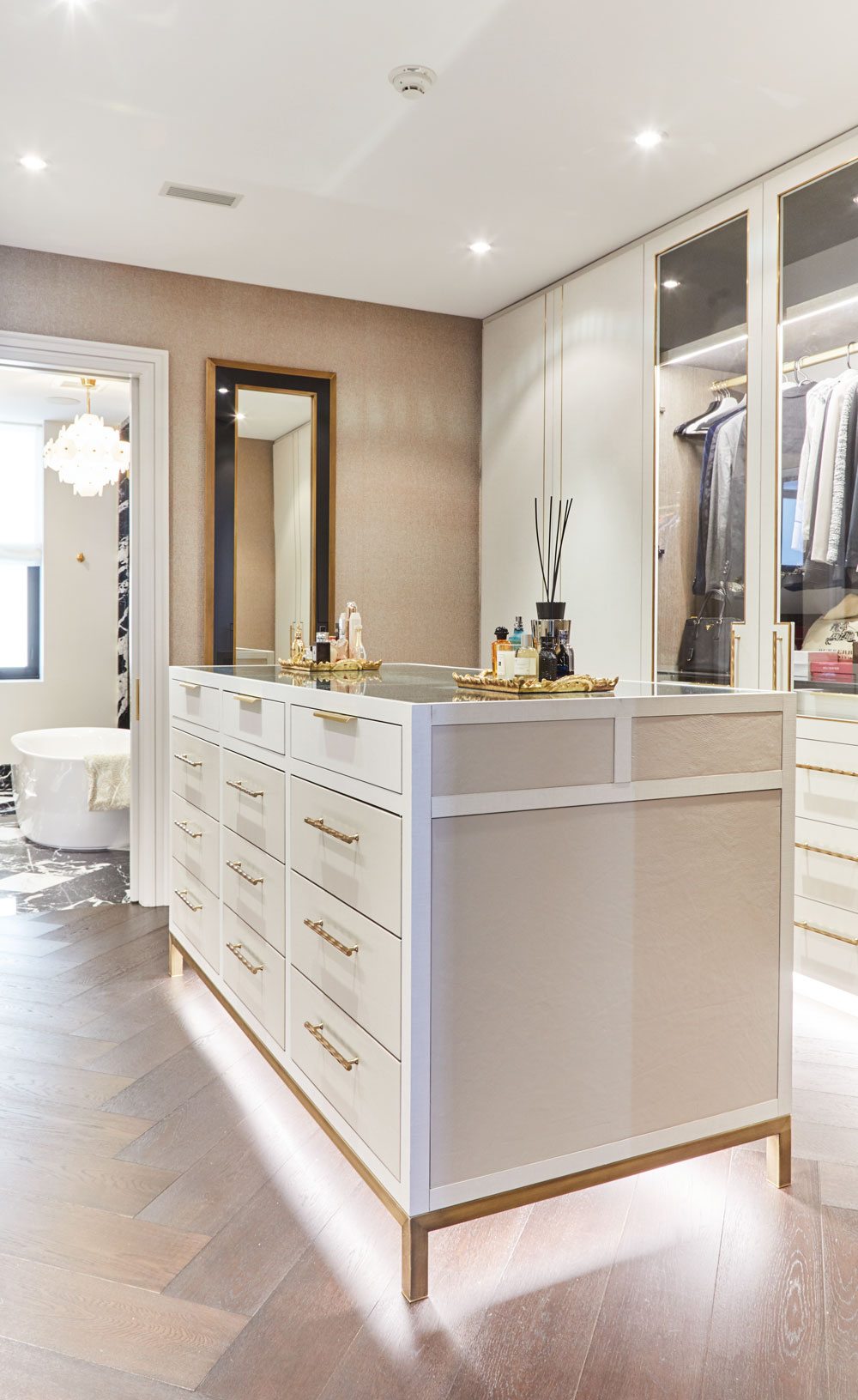 They spent hours sorting through catalogues in search of the perfect master bedroom wallpaper, and they chose this Armani forest print: 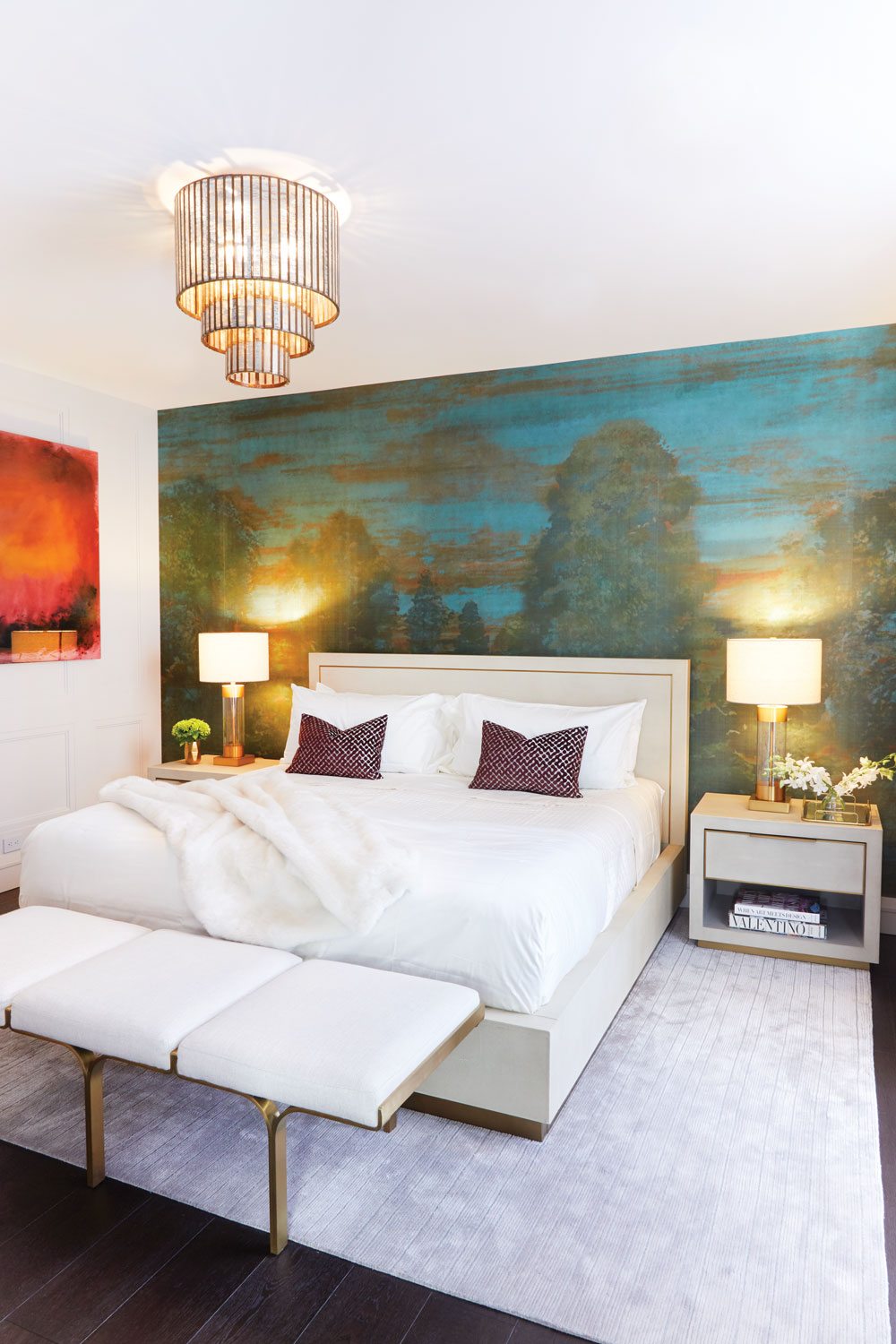 The powder room is a tiled gold chamber that looks more like a perfume bottle than a bathroom. The sink is made of marble: 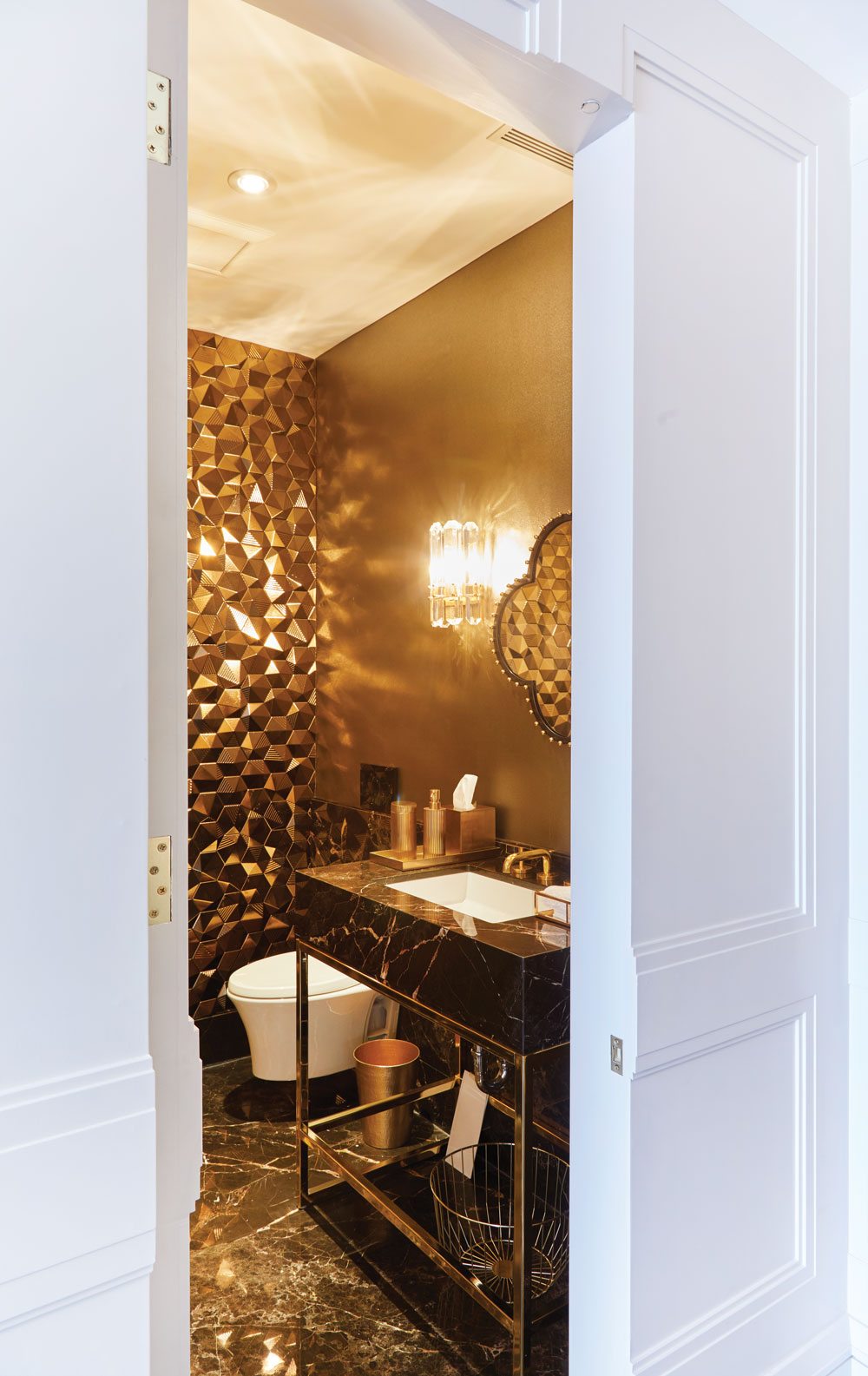 The master bathroom floors and countertop are solid marble. The chandelier is from Jonathan Adler: 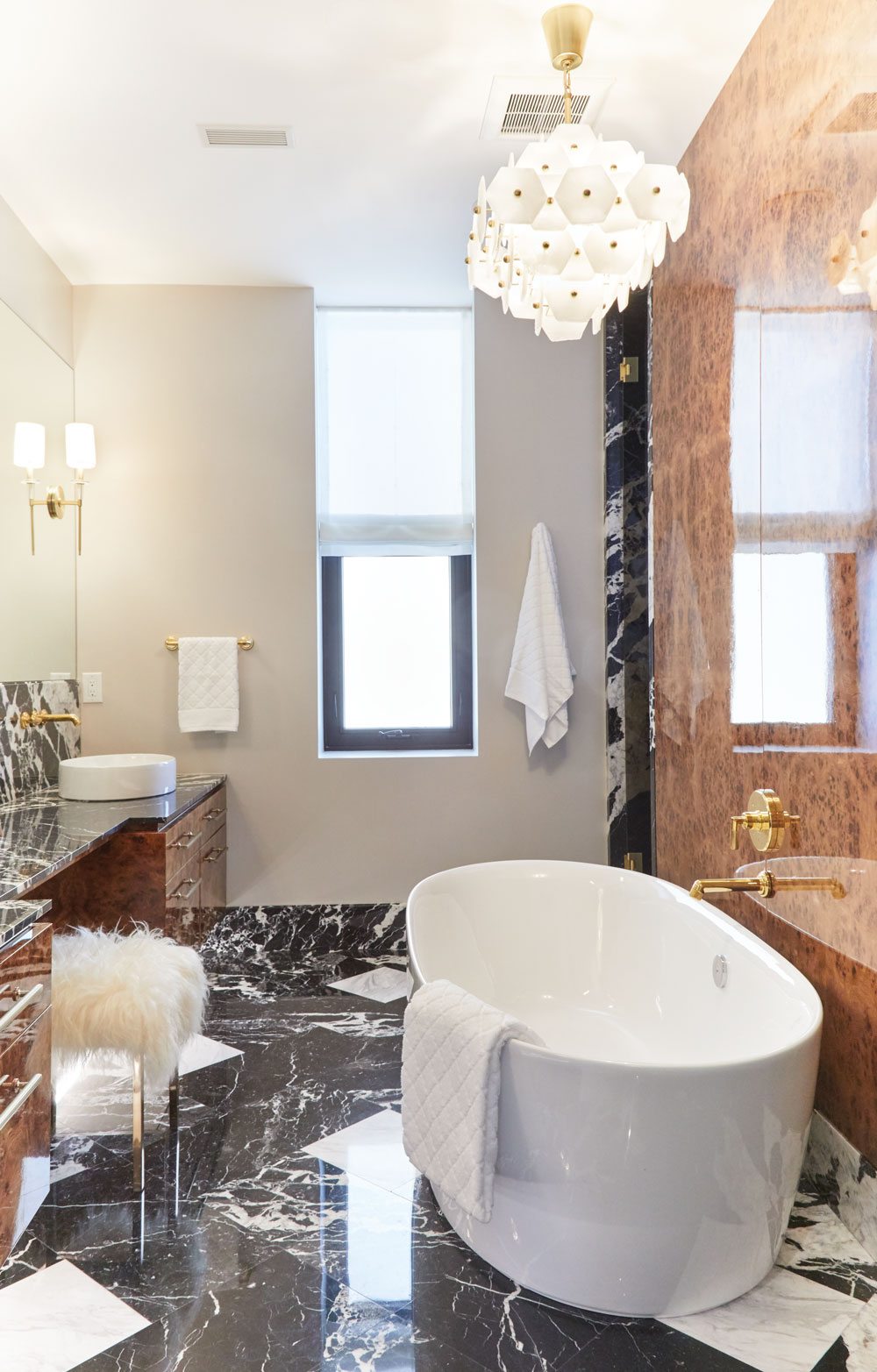 Kayden’s room has a safari theme, with a tent-style canopy bed from Restoration Hardware. The animal-printed wallpaper is from Cole and Son: 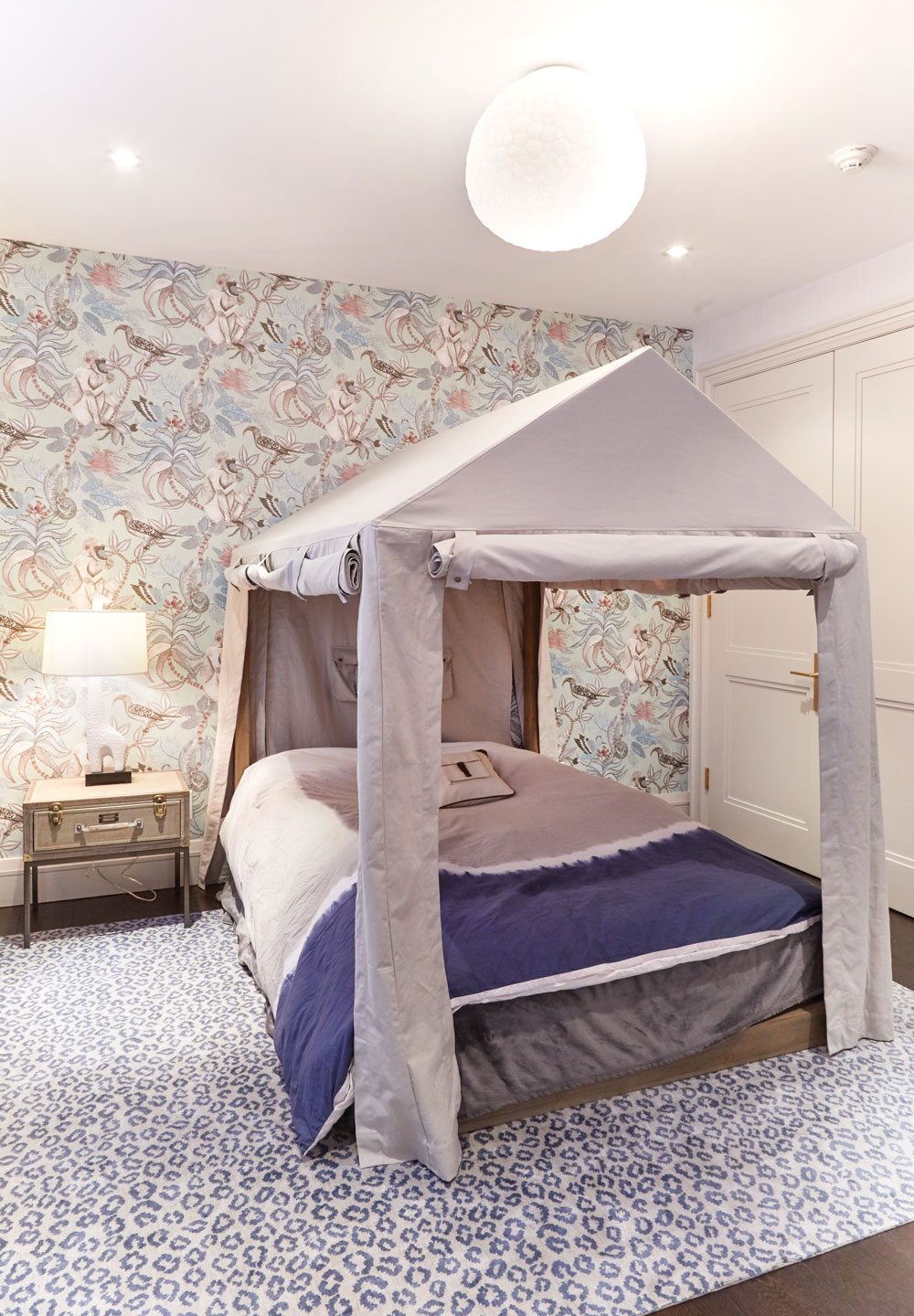 The dining room chandelier is also from Restoration Hardware. The gold vase was purchased from the Aberfoyle Antique Market in Guelph, Jamil’s hometown. The rosewood dining table and blue velvet dining chairs are from Jonathan Adler. (The long, twisted brass sculpture on the table is also an Adler item.) The burled elm console at the end of the table was custom-built by Audax: 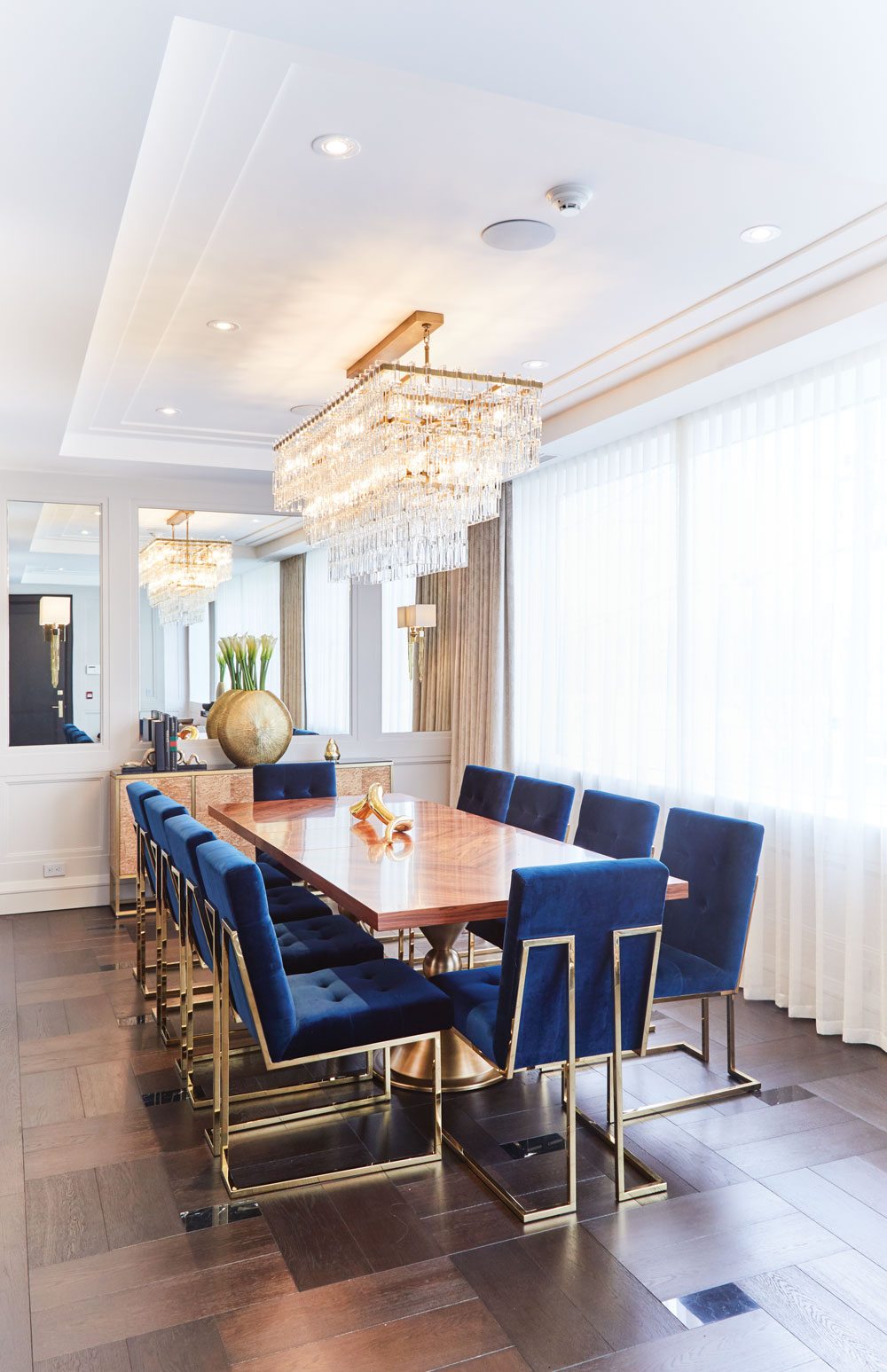 Rayn loves maps, so his parents ordered this massive wooden cut-out from a map-maker in England: 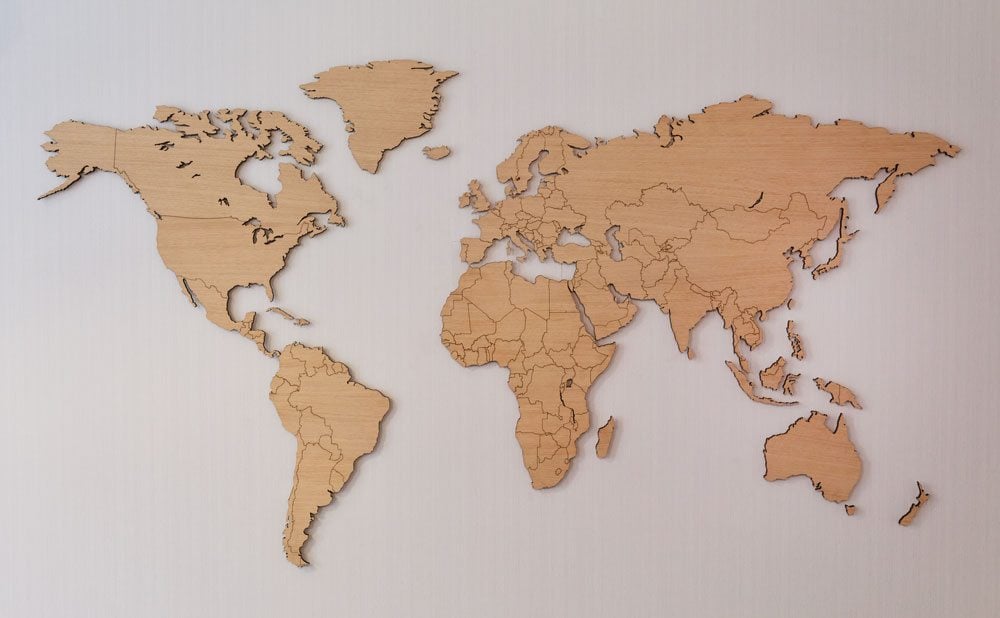 The two-sided fireplace is a floor-to-ceiling focal point in the living room. It was chiselled out of solid granite. The design is an homage to a similar fireplace in the Armani hotel in Dubai’s Burj Khalifa tower, where the family celebrated Rayn’s first birthday: 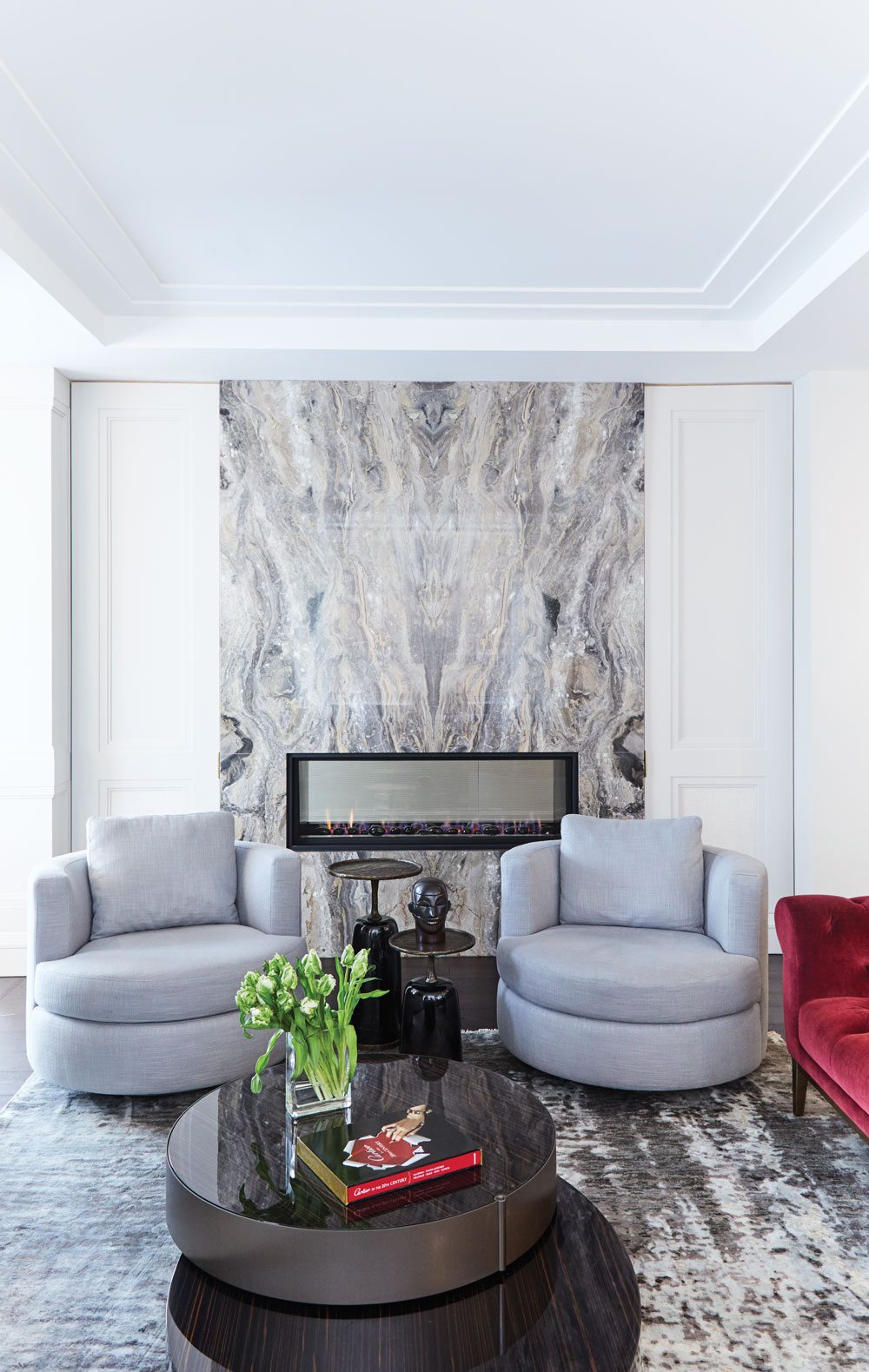 The whimsical wallpaper in Rayn’s room is from Fornasetti: 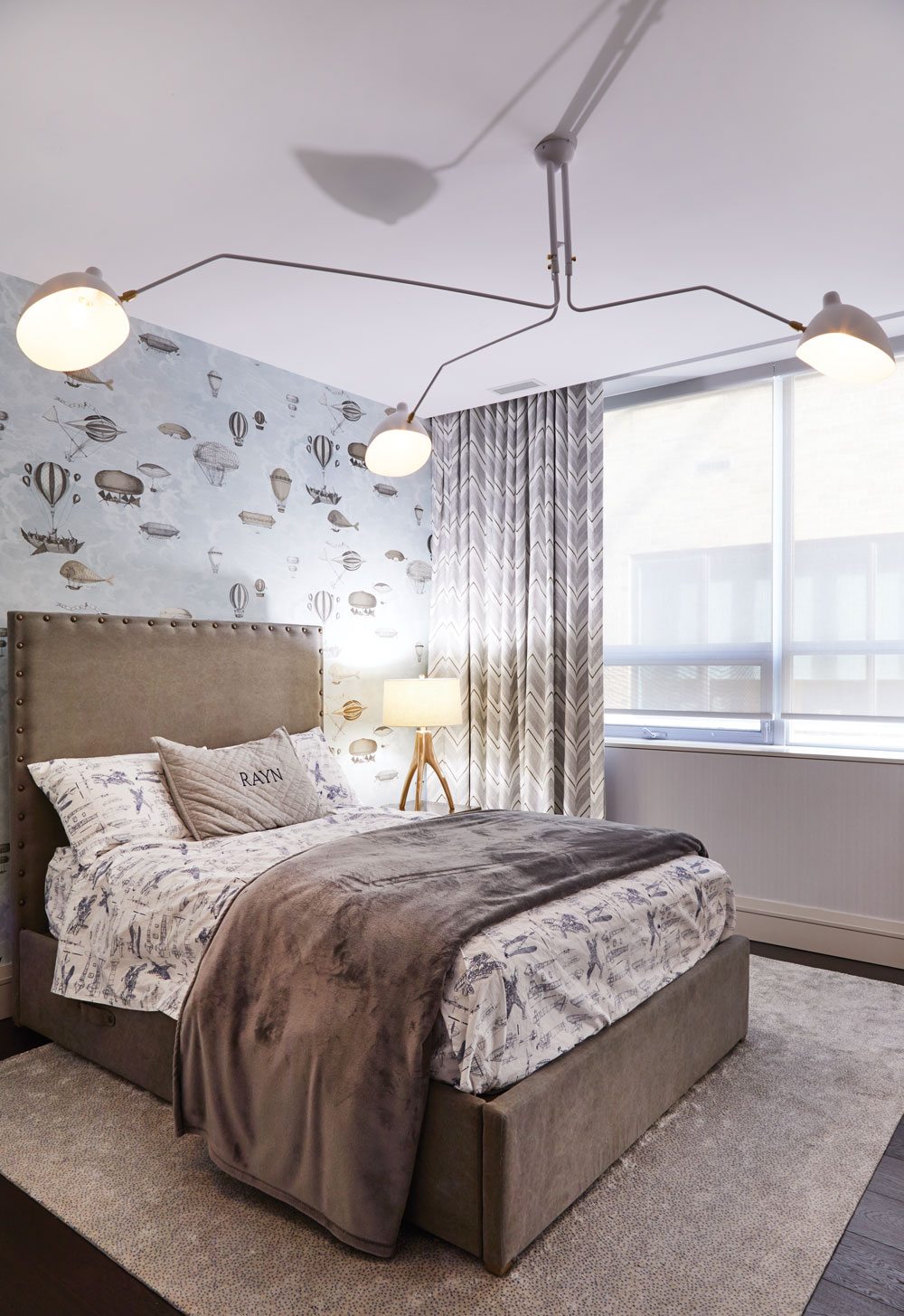