DIY Makeover: This renter updated her hideous one-bedroom with a hand-painted mural and boob-themed wallpaper

DIY Makeover: This renter updated her hideous one-bedroom with a hand-painted mural and boob-themed wallpaper 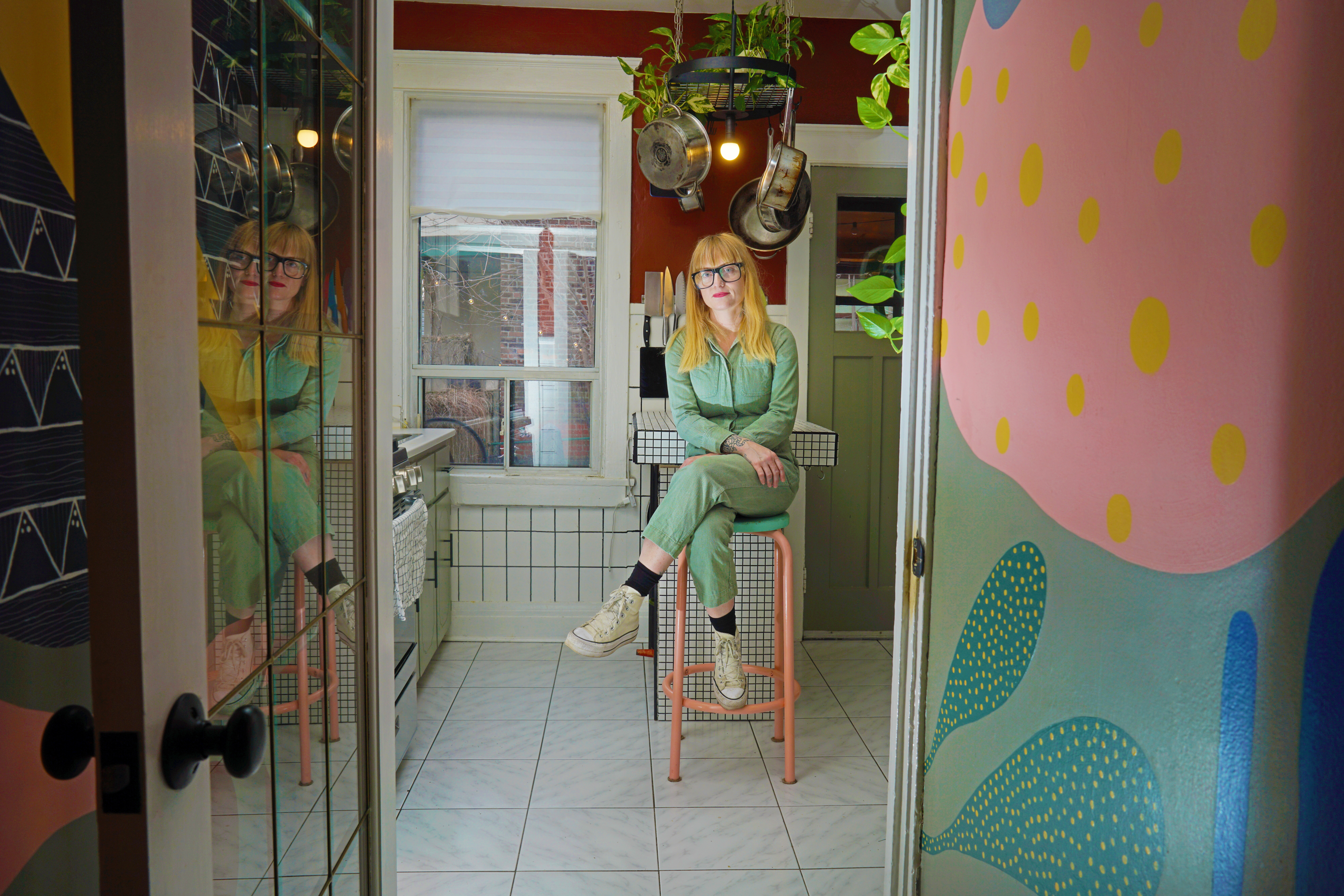 The renters: Shanna Flodstrom, an interior designer, and Tyson Bodnarchuk, an artist and illustrator
The project: A one-bedroom apartment in Christie Pits
The DIY budget: Under $1,000

In 2019, Shanna and her husband, Tyson, moved from Montreal to Toronto in a rush. Shanna had landed an exciting new job with an interior design firm and was subletting a friend’s Toronto apartment less than three weeks later. But finding more permanent housing proved daunting.

Shanna had heard plenty of horror stories about credit checks and bidding wars, but she didn’t want to stray too far from her wish list: a two-level apartment in the west end with a backyard for under $2,000 a month. When she found a one-bedroom near Ossington and Dupont that met her criteria for $2,200 (including utilities), she jumped on the opportunity despite the space being, well, hideous.

“I kind of panic-took it,” Shanna says. “I wasn’t too worried at first. But then I got the keys and saw the place when it was empty and thought, What have I done?“ The apartment was run-down and dirty, with walls that hadn’t been painted in a decade and were filled with holes. The main floor featured a kitchen, a living room and an office, and the bedroom and bathroom were in the basement. But the basement appeared to have been a separate unit at one point, and it had an awkward partial kitchenette tucked into a corner. Though the toilet was behind a door, the sink was in full view of the bedroom.

“Most of my friends were like, ‘I cannot believe you took that place—it’s a dump,’” she says. “But I knew I could make it nice. I’m really good at seeing the potential in things.” As an interior designer, Shanna is no stranger to DIY upgrades. She has updated every apartment she’s ever lived in—approximately 20 to 25 places over the course of her 20s and 30s—and she’s gained new skills with each one.

First, Shanna spackled the holes in the walls and added a fresh coat of paint to them and the baseboards. Next, the couple tackled the bizarre layout in the basement. They ripped out the kitchenette and turned the area into Tyson’s artist studio, tucking it away behind a curtain. They decided that the only option to remedy the “open concept” bathroom was to build a wall. Shanna had done a little drywalling before, and she’s the daughter of a carpenter, so she comes by her handiness honestly.

Living across the street from a Home Hardware helped. “We were walking back and forth with sheets of drywall,” she says. The total cost for two-by-fours, sheetrock, screws, tape, mud, primer and paint was $200. The result? Significantly more privacy. They also replaced the beat-up laminate countertop with wood they stained themselves, replaced the faucet, added wallpaper designed by Tyson and installed new tile on the wall behind the sink.

The kitchen demanded their attention next. Shanna envisioned a space with more character—“I’m really not afraid to go bold,” she says—so she asked her landlord for permission to rip out the fake-wood laminate kitchen counter and replace the leaky faucet. The landlord offered to pay for the cost of materials ($300).

After ripping the counter up, they discovered that it was completely rotten and mouldy underneath. Replacing the sink was “a bit of a nightmare,” Shanna says, because they had to connect new PVC pipes to the old copper ones and align the new drain in the exact same spot as the old one. The project, which they expected to take a single afternoon, ended up consuming an entire weekend. “Mainly because we are amateurs,” she says.

Next, they added new matte-black handles to the kitchen cabinets, painted the lower ones sage green and updated the walls with a shade of terra cotta. Shanna took a black grout pen to the white wall tiles for contrast. The matching black-and-white tiled kitchen island is an IKEA hack: they purchased a Förhöja cart ($169), covered it in concrete boards and added white tiles and black grout. At $300, not including the cost of the cart, it was the most expensive project in the house.

Shanna and Tyson collaborated on freehand painting an expansive mural in the front entrance hallway that incorporates both of their signature artistic styles: her colourful swirls and his monsters. Much of the paint they used was leftover from Tyson’s gig painting bike barriers for the City of Toronto. To create a work-from-home space during the pandemic, they put up a wall of shelving in the living room, where they display their collection of art-and-design books and graphic novels.

The final project was the living room, completed in October 2022. The walls were painted white, but Shanna put up a boob-themed wallpaper that she designed (she only had to pay for the printing costs: $300), retiled the fireplace (using leftover grout and glue from the kitchen update) and painted it a vibrant yellow. The overall effect is whimsical.

The total tally of the couple’s home reno was just under $1,000. And, while they hope to be able to buy at some point, they plan on staying in the apartment for the foreseeable future. “We’ve been here for three years, and the rent is reasonable,” says Shanna. “For now, we’re not going anywhere.”