Condo Diplomat: How to deal with sticky high-rise situations

Condo Diplomat: How to deal with sticky high-rise situations 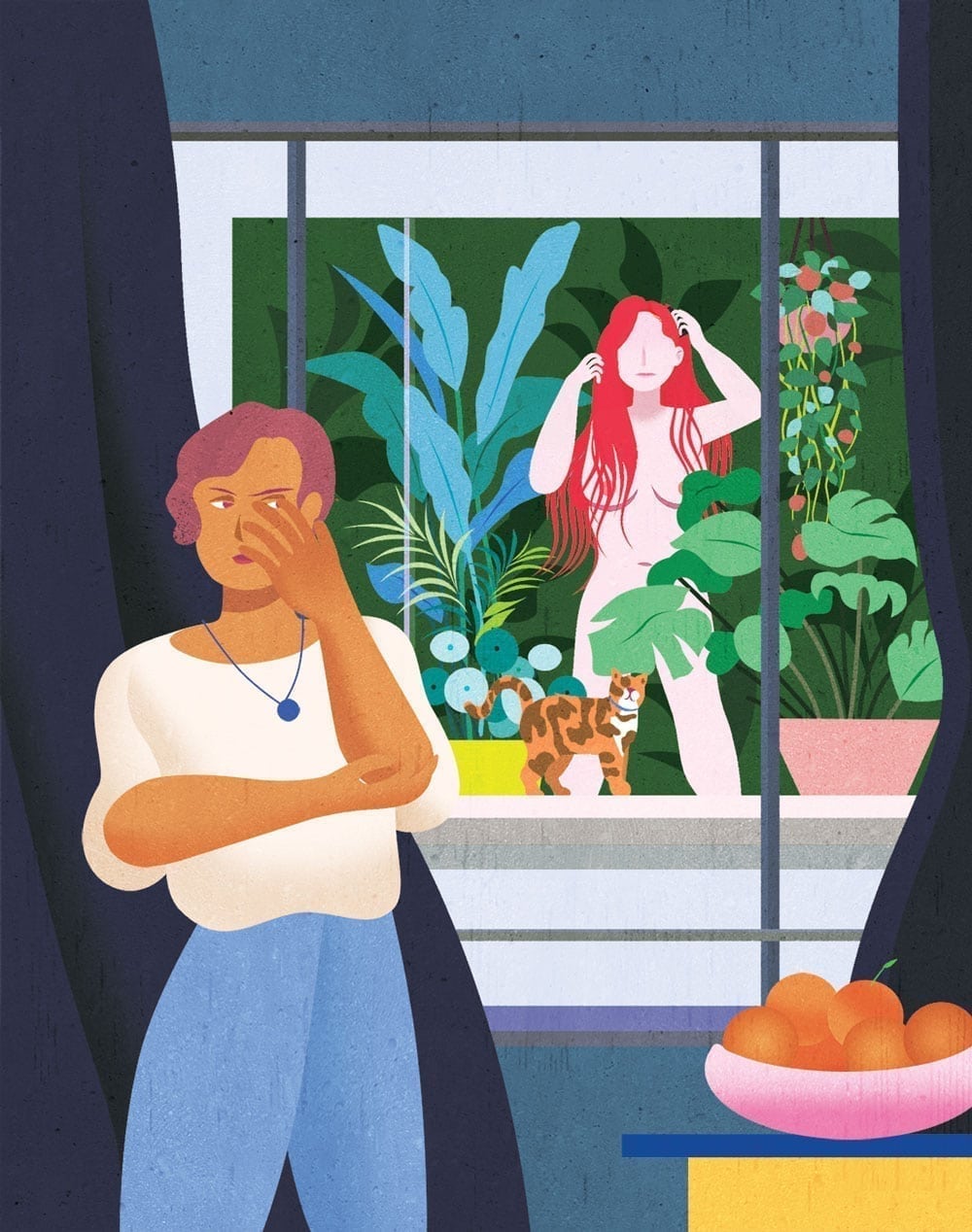 What can I do about my nude neighbour?
A new building recently went up across the street from my condo. Most of its units have floor-to-ceiling windows, meaning I can easily see into the unit opposite mine, and vice versa. Over the last couple of weeks, the tenant has been doing her personal grooming in the nude. Not to be overly graphic, but it’s a full-frontal view—think Sharon Stone in Basic Instinct for 45 minutes straight. I don’t know if she’s aware of her indecent exposure, but it happens so regularly that I often keep my curtains closed and even worry about inviting people over. What can I do?
—Nude Awakening, King West

Any condo dweller with a wall of windows and half a brain knows that they live in a giant fishbowl. I’m guessing your new neighbour is an exhibitionist. Ultimately, you can’t control what she does in the (non-existent) privacy of her own home. But she sounds like the type to get off on shocking others with her big reveal, so if you don’t like it, look away. Ask your dinner guests to do the same, and maybe she’ll seek out eyeballs elsewhere.

How do I stop my lobby from becoming a homeless shelter?
This past winter, during one of Toronto’s extreme cold snaps, a resident in my condo invited two homeless men from the neighbourhood into our building’s lobby and told the concierge that they were her “guests.” I thought it was an admirable gesture—until she retreated to the ­privacy of her unit and left them unattended downstairs. Nothing bad happened, but it could have, and some residents—including me—were understandably miffed. Could I have done something?
—Cold Comfort, Corktown

Inviting strangers out of the cold is an act of charity. Dumping them on an unsuspecting concierge is delegation of duty. Clearly, your neighbour wanted the rewarding feeling of helping others without doing any of the hard work, like actually inviting the men up to her unit or eventually asking them to leave. The front-desk staff should have immediately explained to your building’s fair-weather do-gooder that, as her guests, the men were her responsibility. There’s no guarantee she’d have listened had you spoken up, but you can always tell building management about the situation. They can explain to her that the next time she wants to be a saint, she’ll need to stay the course.

How do I reject a gym creep?
I hit the gym in my condo before work most mornings. It’s usually the same group working out, including one guy who’s become too chummy for my liking. He talks to me even when I have earbuds in, and he’s asked me out for coffee a few times. I’ve politely brushed him off and told him I was busy, but he won’t let up. I don’t want to be rude or say anything that could make my morning workouts more uncomfortable than they already are. What do I do?
—Fitness Protection Program, CityPlace

Your unsolicited gym buddy should have taken the hint long ago. Since he hasn’t, he could be oblivious—or just hoping his persistence will wear you down. Either way, he’ll probably keep at it until you give him a hard no. Next time he chats you up while you’re on the elliptical, keep your earbuds in and tell him you don’t have time to talk. If he’s bold enough to ask you out again, don’t tell him you’re busy; tell him you’re not interested. You may be surprised how quickly he quits pretending to be your pal once you shut him down.

Should I tell someone about my neighbour’s temper tantrums?
My husband and I live next to a family with two preschoolers. With startling regularity, we hear their mother screaming at them. It frightens me as an adult, so I can only imagine what it must be like for the kids. At what point am I morally obligated to intervene, and what would I even say?
—Mother Superior, Willowdale

You don’t know much about your neighbour’s situation, but one thing is certain: she has a short fuse. It might be within your rights to ask if everything is okay if you know the family well, but otherwise, it’s best to avoid a confrontation and leave intervention to a ­professional. If you see clear signs that she—or her kids—are in distress, call Children’s Aid. Contrary to popular belief, CAS only removes children from their home as a last resort. They’re much more likely to connect your neighbour with the support she needs. 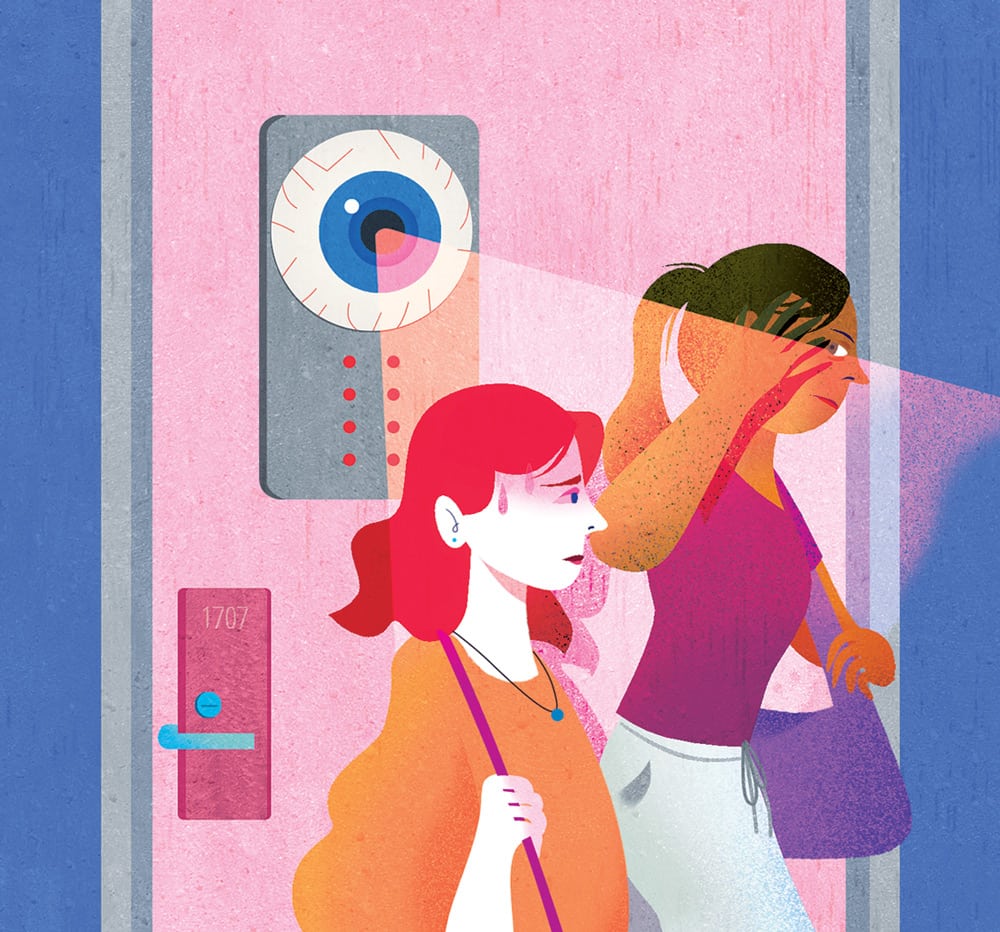 Are video doorbells allowed in condos?
I live on the 38th floor of a high-rise condo. The people across the hall have a video doorbell, which they access from their phones to let their dog-walker and cleaner in. For folks who own houses and want to keep an eye on their yard, I get it. But in a condo, it feels excessive (the building already has a concierge), not to mention invasive—it sees me and the inside of my unit every time I leave or come home. Can I ask them to get rid of that thing?
—Eye in the Sky, Yonge and Eglinton

Unless your neighbours got permission to install the camera, chances are they’re breaking at least one of your building’s rules. Typically, high-rise condo residents are prohibited from altering common areas, and doors ­usually fall into that category. Tell management that your neighbour has gone full Big Brother on your hallway and explain why you’re uncomfortable. It’s up to them to let the residents know their amateur surveillance system is verboten.

Can my neighbour treat his balcony like a doggy potty?
My husband and I live in a condo, and one of the owners below us (one floor down, one door over) lets his dog do his business on their balcony. He rarely cleans it up, so there’s usually a week’s worth of number twos festering at any given time. Whenever we go out for a smoke, the view and stench are atrocious. I’ve already left a note on his door to no avail. What should my next move be?
—Whine of Doody, Liberty Village

Face-to-face conversations generally make a stronger impression than ­passive-aggressive notes. Pay your neighbour a visit and politely explain that turning his balcony into a giant litter box is ruining your al fresco experience. If that doesn’t change anything, file a complaint with your condo board. While some boards are notoriously inept at cracking down on things like this, many have rules about exactly what items are allowed on residents’ balconies—and a mountain of poop isn’t likely to be one of them.

Send your questions, condo-related and otherwise, to the Urban Diplomat at urbandiplomat@torontolife.com