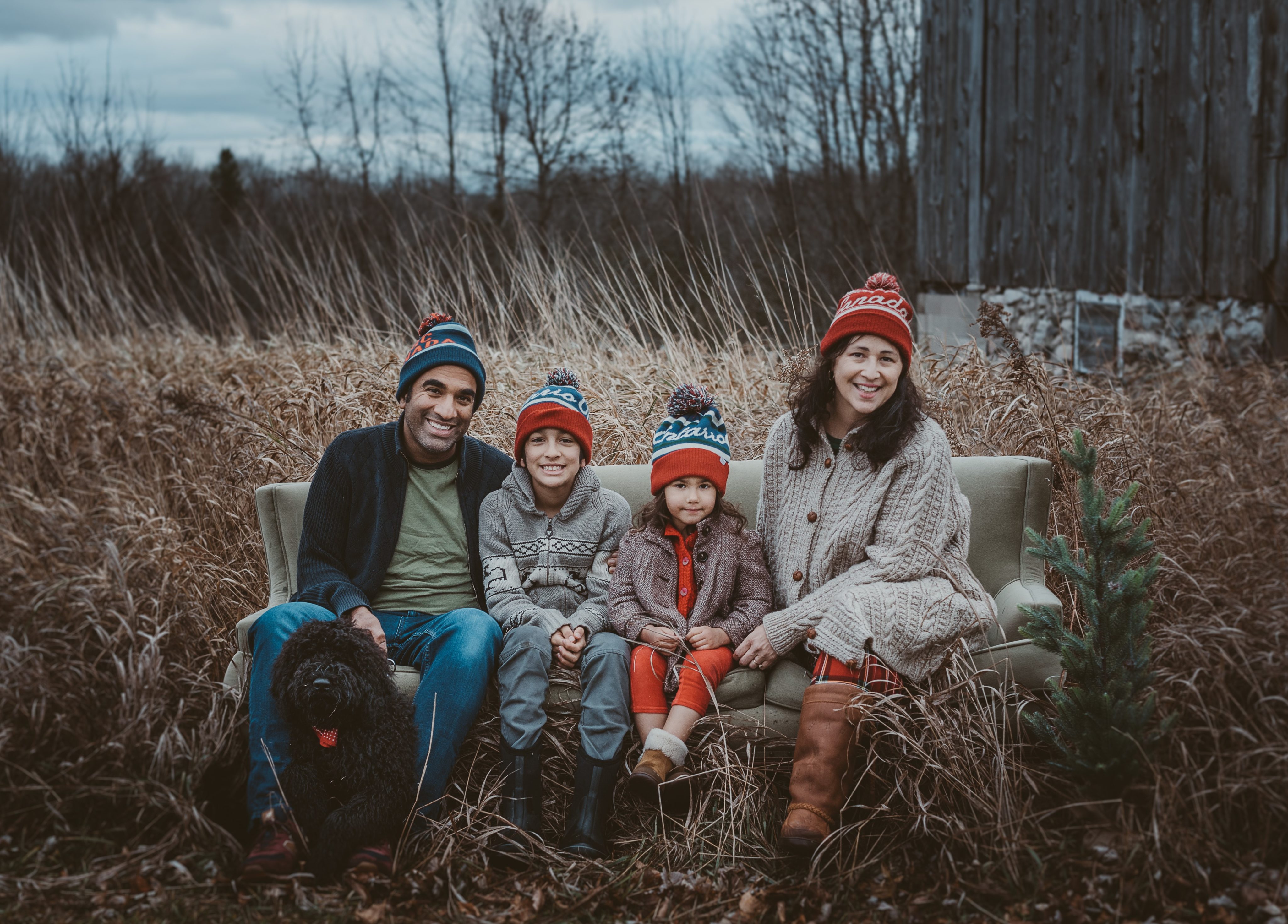 The history: Ranna and James got married in 2006. By 2015, they had two kids (Pascal and Saffron) and a five-bed, four-bath house at Bloor and South Kingsway, for which they paid $1.6 million.

In 2017, James and Ranna bought a four-bed, three-bath cottage in Sauble Beach for $415,000. James’ parents had a cottage in the area that the family would often visit, and they liked the idea of having a vacation property of their own.

After that, Ranna and the kids spent their summers up at the cottage while James went back and forth from the city for work.

When the pandemic hit, James began working from home and Pascal and Saffron were also home from school. Ranna’s business as a freelance lifestyle photographer went on hold because of pandemic restrictions and she started helping the kids with virtual schooling. Meanwhile, James, who works as a management consultant at Deloitte, used Ranna’s home photography studio as a home office.

At the end of May 2020, the family drove up to their Sauble Beach cottage, getting an early start on the summer since everyone was working or learning remotely.

Ranna would help the kids with school-related online activities, then they would go for walks in nature or go to the beach, which was only 10 minutes from their cottage. The kids took swimming and horseback riding lessons, through which they made friends and met other families in the area.

In June, they bought a puppy, a French water dog they named Harlow, which led to meeting more dog owners and families along the hiking trails nearby, like the Bruce County Rail Trail. The family started to feel like they were part of the community.

Ranna and James thought about staying in Sauble Beach for the next school year, hoping things would be back to normal after that and they could return to the city.

In September, to celebrate James’ birthday, the family went on a trip to a sunflower field 30 minutes south of Sauble Beach. On the way back, they passed by Paisley, a small community of about 1,000 people.

James and Ranna fell in love with the town. It had a small downtown area with beautiful old buildings. There were lots of wooded nature trails nearby. And since two rivers meet in Paisley, there’s good kayaking, too, which is a bonus for Ranna and James, who are both avid kayakers.

Paisley is also known for having a strong arts community, with local galleries and events, like an outdoor blues festival that happens every summer. After spending the afternoon there, James and Ranna thought it would be nice to purchase an investment property in the area.

The hunt: After they got back to Sauble Beach, Ranna started researching properties in Paisley and the surrounding township of Arran-Elderslie. Their budget ranged between $300,000 to $500,000, depending on the type of property they found. They were open to buying a property and letting it appreciate in value or purchasing a retail business or restaurant and using it as an income property.

In late September, Ranna saw a listing for a three-storey building in downtown Paisley, listed for $275,000. It had been on the market for five years. The main floor was a 1,200-square-foot restaurant, Marty’s Bar & Grill, and there was a residential apartment on the second and third floors.

The building was old, dating back to 1890, and the upper floors were dated and would need a complete overhaul. Marty lived up on the second floor, while the third floor had been abandoned for decades. At 65, Marty was ready to retire.

Seeing the place gave James and Ranna a radical idea: what if they bought the building, operated a restaurant downstairs and turned the top floor into their permanent home? Ranna had worked in restaurants when she was younger and always dreamed of opening one herself. It would basically upend their lives, but the chaos created by the pandemic created an unmissable opportunity.

The family could live up north for the indefinite future. Pascal and Saffron could attend the local school in Paisley, and Ranna and James could rent out their Swansea home and keep the Sauble Beach cottage as a vacation property. Another plus: Paisley was 30 minutes closer to Toronto than Sauble Beach, which would make it easier for James to travel to his office at Bay and Adelaide whenever necessary. They family decided to go for it.

The outcome: On March 1, a contractor got started on the renovations. James and Ranna spent about $150,000 upgrading Marty’s Bar & Grill, putting in new pine flooring, exposing brick walls and adding tin ceilings to match the late 1800s era of the building.

They reopened in mid-March as the Paisley Common, keeping Marty’s menu of gourmet comfort food while adding their own dishes, like a kale caesar salad and a Beyond Burger with vegan cheese. 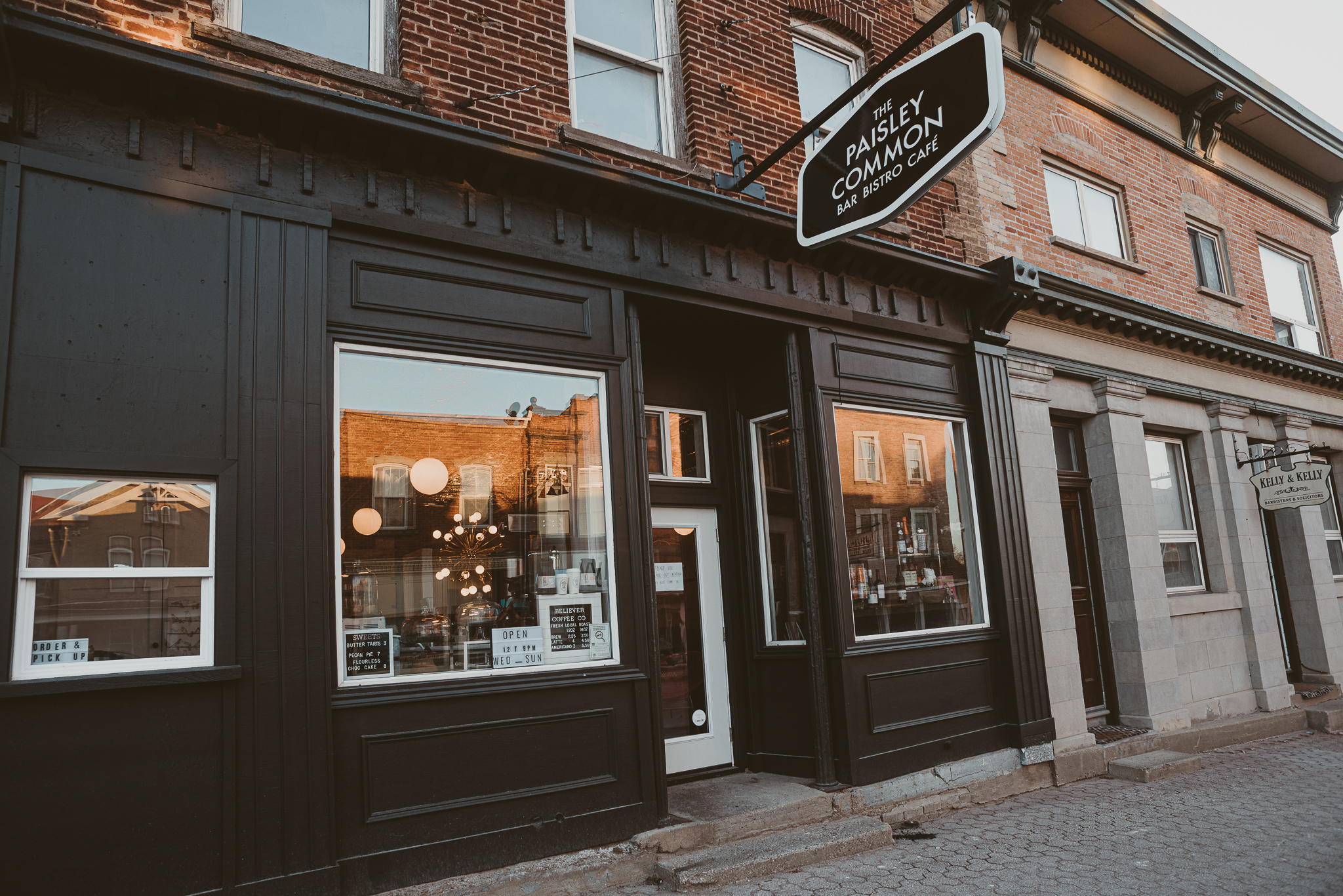 Paisley Common was open for dine-in for two weeks. Plenty of community members visited the restaurant, including teachers from Pascal and Saffron’s new school. In April, when the latest stay-at-home orders were announced, the restaurant switched to takeout.

Ranna and James are currently renovating the 800-square-foot second floor of the building to become part of the restaurant, with the goal of increasing seating from 40 guests to about 90. 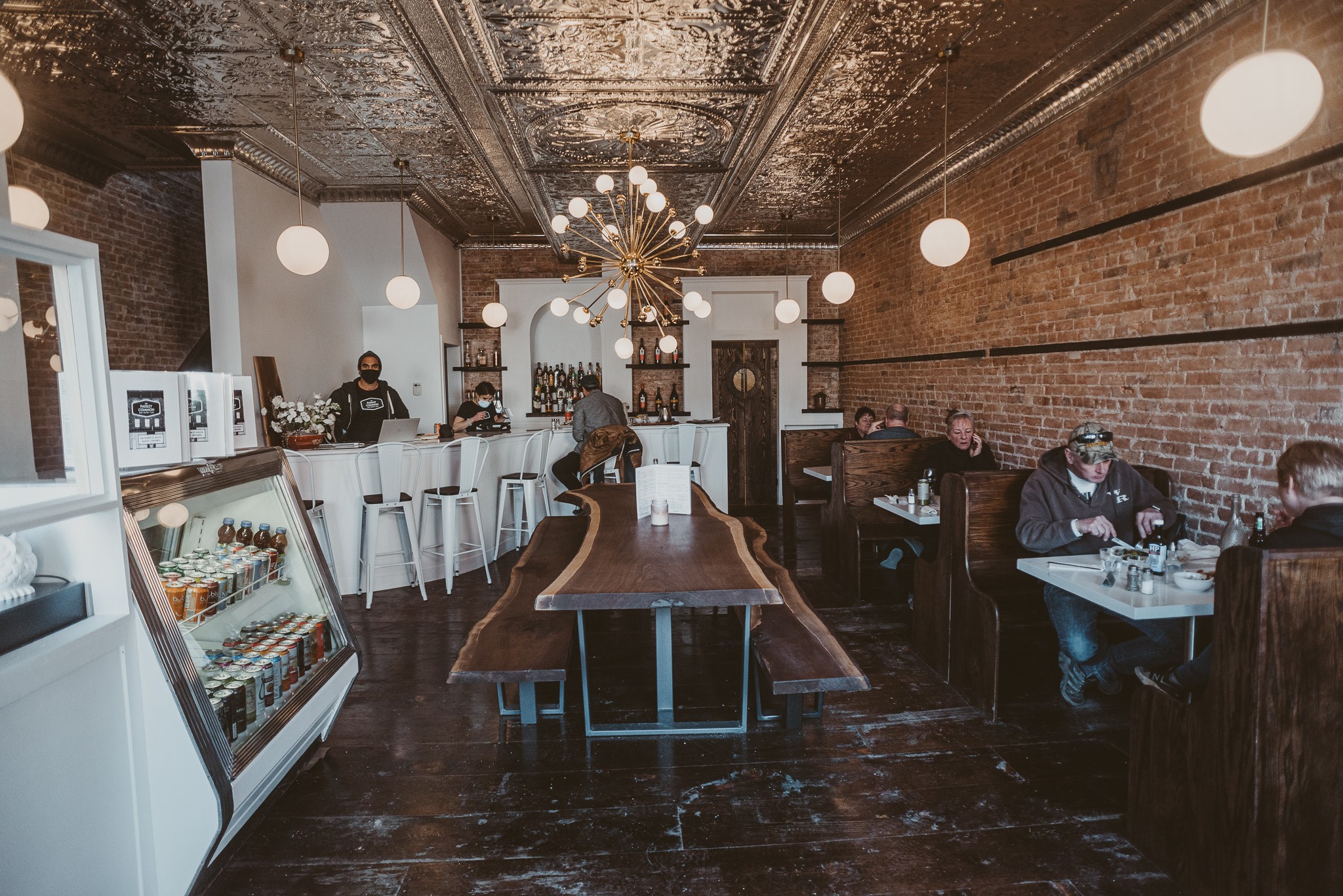 At the same time, the third floor is also being renovated into their new family home. Ranna and James are planning to create three bedrooms, a full bathroom and a powder room.

The apartment is only about 800 square feet (a serious downsize from their 3,500-square-foot Swansea home), but the ceilings are a generous 10 feet high. They’ll take advantage of that extra height by building loft beds in all the rooms to increase their living space. 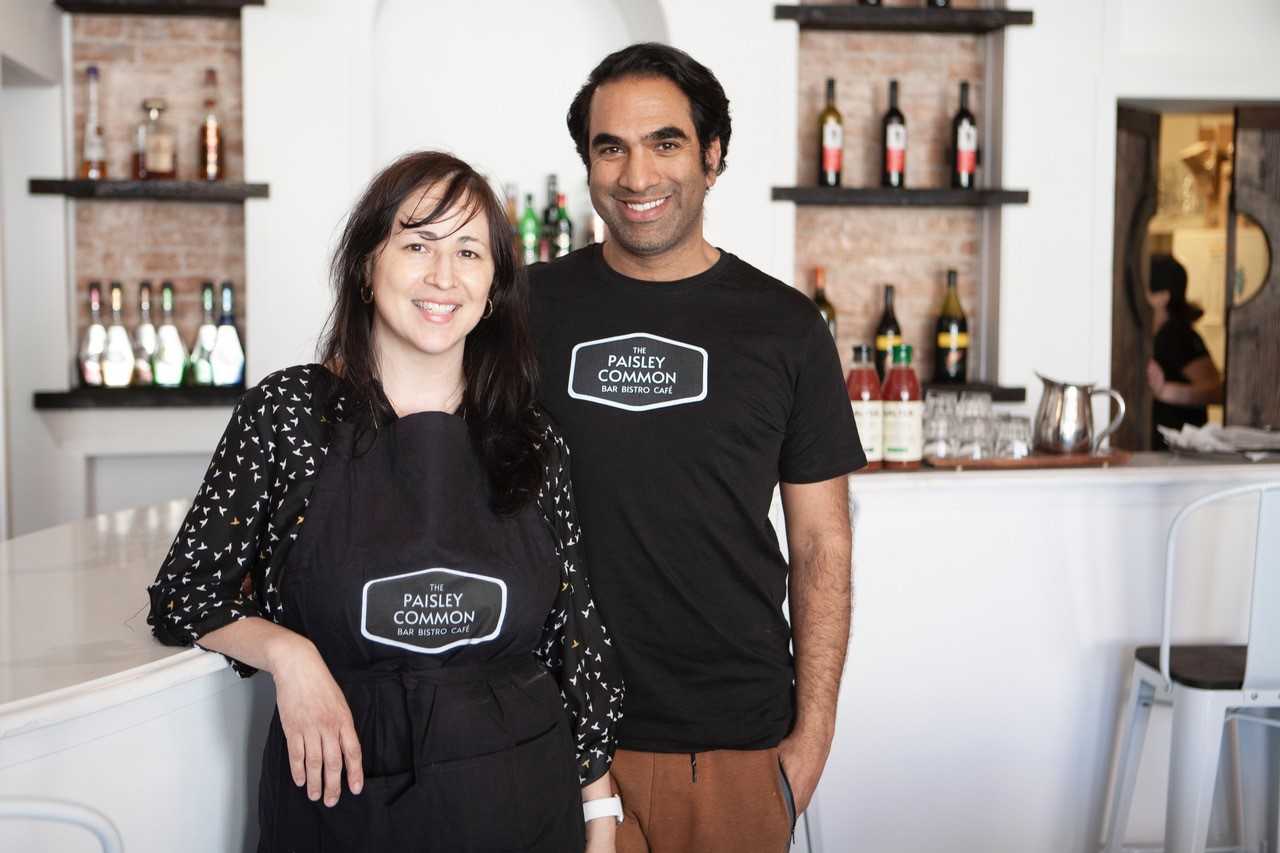 Ranna and James plan to spend another $250,000 to renovate the second and third floors of the building, with the aim of moving into their new home in June.

They’ll keep the Sauble Beach cottage as their vacation property and continue living there until they move to Paisley. And if James is needed back in the office, he plans to stay in Toronto at their Swansea home from Tuesday to Thursday, then spend the remainder of the week in Paisley.

The family is excited to realize Ranna’s lifelong dream of opening and running a restaurant. Ranna will continue with her photography business while overseeing the Paisley Common.

James is optimistic about getting the best of both city and country living. And since they’re about two-and-a-half hours from Toronto, they still sees themselves going back to the city often to visit.

Meanwhile, the kids love being in the country and spending more time in nature, whether swimming in the river or admiring the stars at night. Schools starts in September.

James and Ranna look at this move as an adventure for the family and plan to stay in Paisley for three to five years, after which they’ll reassess. “We’ve found a new sense of adventure because of this pandemic,” says James. “In many ways, we feel more mobile than we’ve ever felt before in our lives. So who knows what the next adventure will bring.”

Do you have an interesting story about buying or selling a home during the pandemic? We want to hear it: realestate@torontolife.com