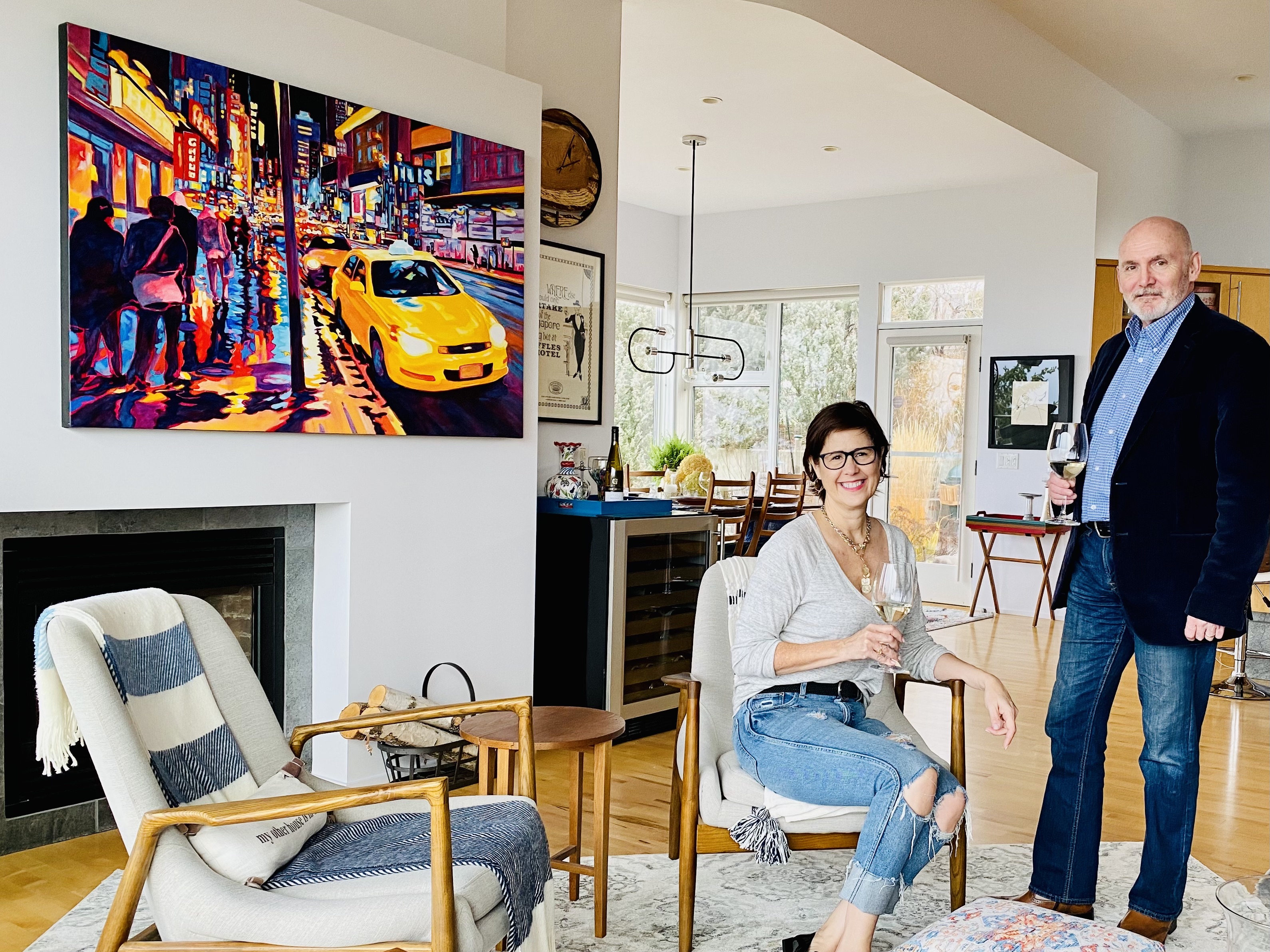 The history: Sally and John met online in 2014. John, who grew up in the GTA, was living in a three-bed, two-bath century-old Victorian row house in Cabbagetown, which he bought back in 2001 for $455,000.

Over the years, John renovated the house from top to bottom—including replacing the flooring and windows, and redoing the bedrooms and kitchen. He spent about $100,000 on the renovations, keeping costs relatively low by doing most of the work himself.

Sally, who grew up in Woodstock, Ontario, moved in with John in 2015. The couple have five children between them, ranging in ages from 18 to 38, with John’s youngest son living with them part-time.

The couple loved living in Toronto. They frequently took the subway and streetcar. They went to concerts and Blue Jays games. They especially loved living in Cabbagetown, where they could walk to the neighbourhood bakery, florist or butcher. Another bonus: their home was close to House on Parliament, which they described as “Toronto’s number one pub.”

But as much as they enjoyed city life, the couple often talked about retiring elsewhere. They dreamed of living part-time in Spain, Portugal or France, while keeping their Cabbagetown home as a rental property. They wanted to experience the culture, cuisine and scenery abroad.

The pandemic changed that plan. Living overseas didn’t seem possible in the foreseeable future, so they considered other places in Canada. John fondly remembered a family ski trip he took to Kelowna, B.C. back in 2011. It’s a city of about 150,000 people, known for its warm summer weather, lakes, vineyards and hiking trails.

“Kelowna is just breathtaking,” he says. “I remember flying in and seeing this amazing valley with mountains and water. I remember saying, ‘Wow, I could retire here.’”

Sally, on the other hand, had never visited Kelowna. She started researching online, and discovered an active arts community in the area. She also liked the thought of seeing the mountains every day. And, while their 2,000-square-foot row house had more than enough indoor space, Sally imagined having more outdoor space than their 500-square-foot paved backyard provided.

The hunt: Sally and John thought they could sell their property in Toronto, buy a home in Kelowna, and still have some money left over for renovations.

In March 2021, they connected with a real estate agent in B.C. The couple wanted a three-bed, two-bath detached with enough space to entertain guests in the kitchen and living room. But, they soon discovered, they would have to raise their budget of $1.5 million if they wanted something with a great view.

According to their agent, prices in Kelowna were rising fast. When, that same month, John’s son accepted an offer to study at Dalhousie, the soon-to-be empty nesters decided it was time to act quickly. They raised their budget to $2.25 million.

In May 2021, John went out to Vancouver for work. While there, he decided to visit Kelowna and see a few homes. As John walked through the homes, Sally joined him over Facetime.

One of the properties was a three-bed, three-bath in the municipality of Lake Country—halfway between Kelowna and Vernon—listed for $1.7 million.

The home was at the end of a quiet cul-de-sac, on a 13,000-square-foot hillside lot, next to protected provincial parkland. The first thing John noticed was the breathtaking view from the back of the house, which looked out over a winery, Lake Okanagan and the mountains. The front yard was brimming with plants and gardens. 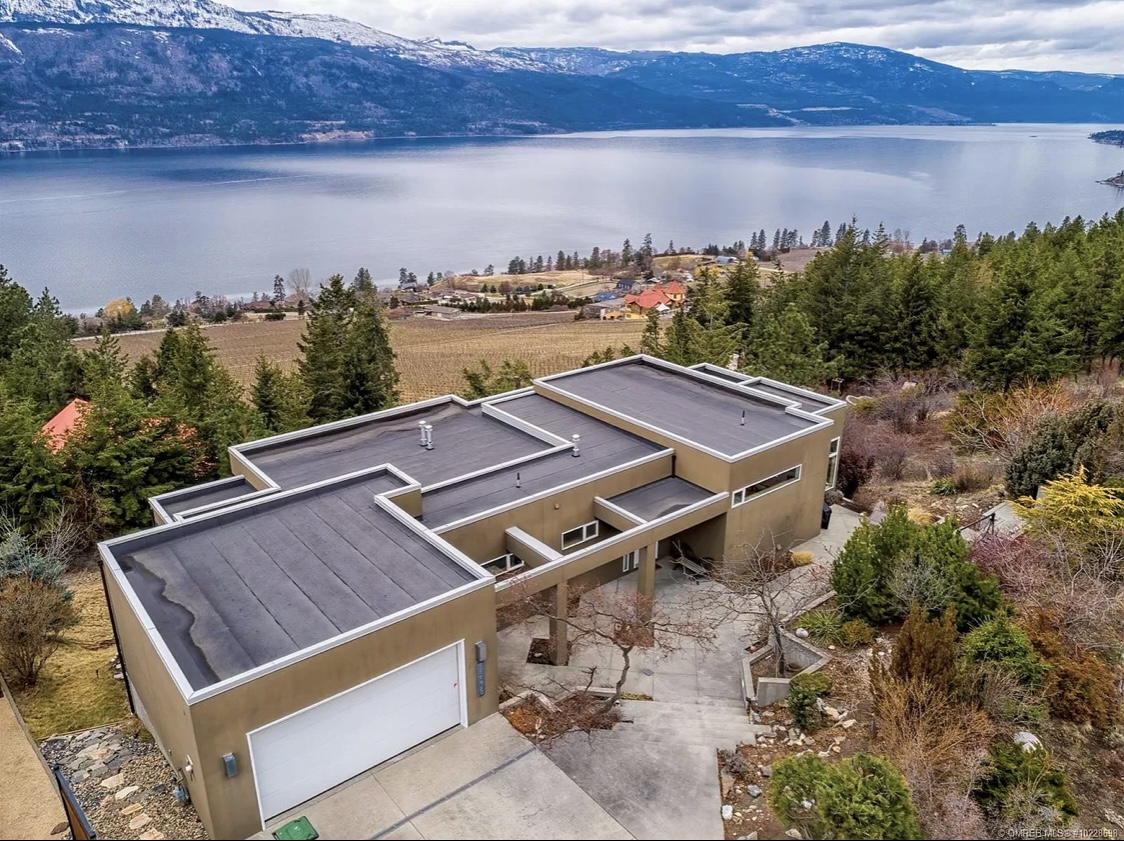 Sally and John call the home “stunning,” with brutalist-like architecture. Walking into the 3,800-square-foot home, they were immediately met by a wall of windows. 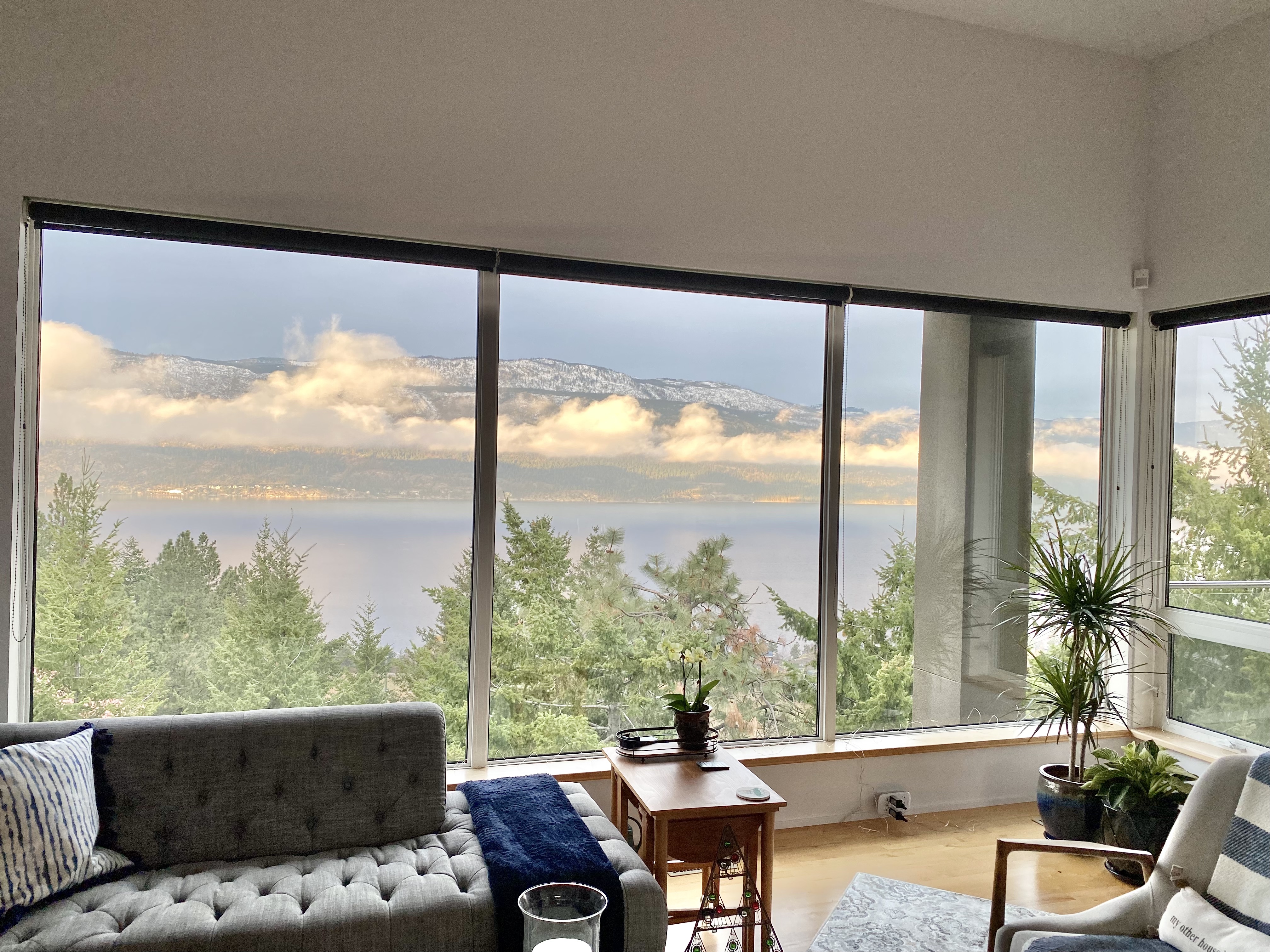 They were taken with the 12-foot-high ceilings and open-concept kitchen and living spaces. 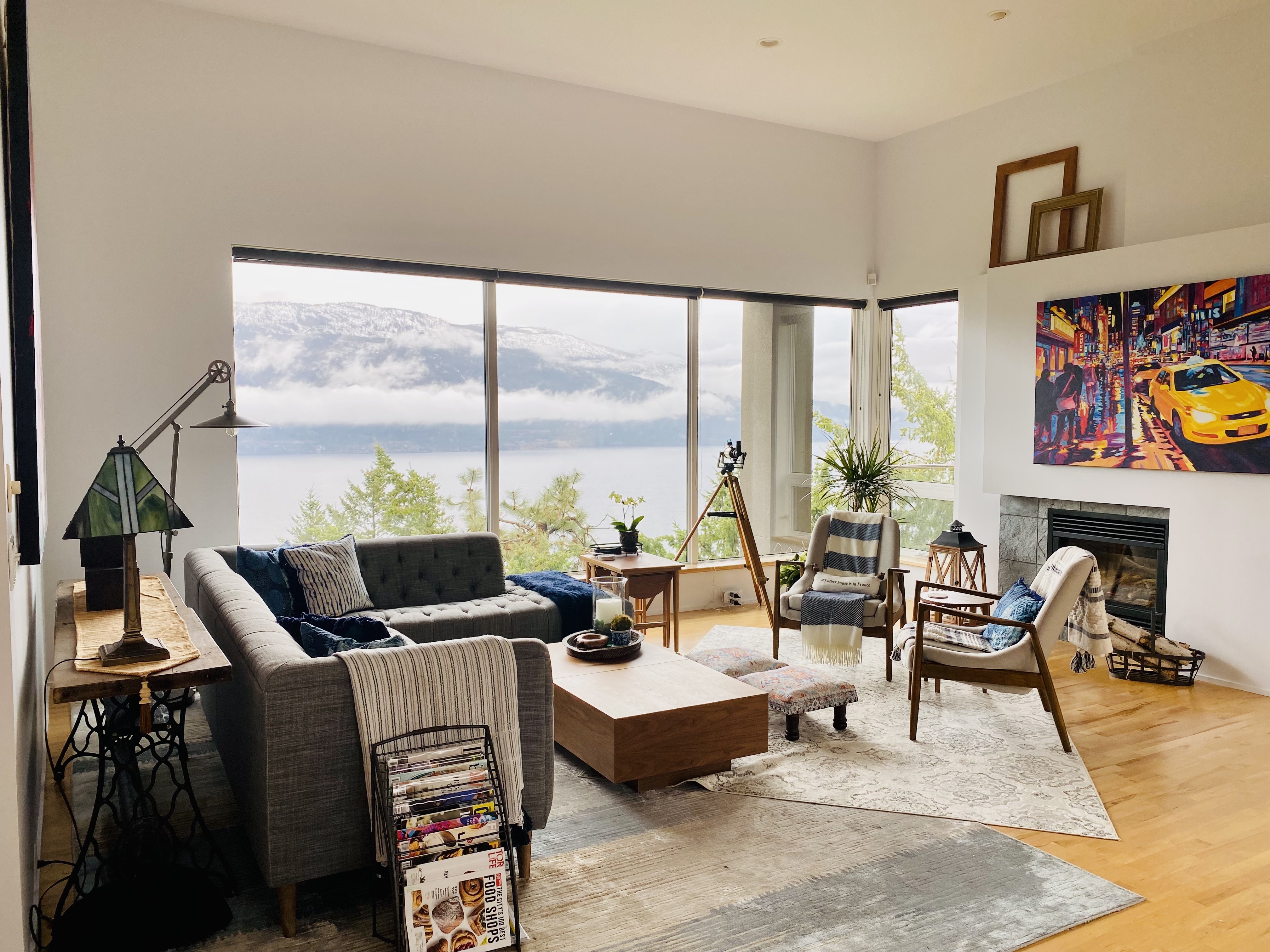 Seeing the enormous kitchen, the couple began to imagine cooking while guests sat at the oversized island with glasses of wine. 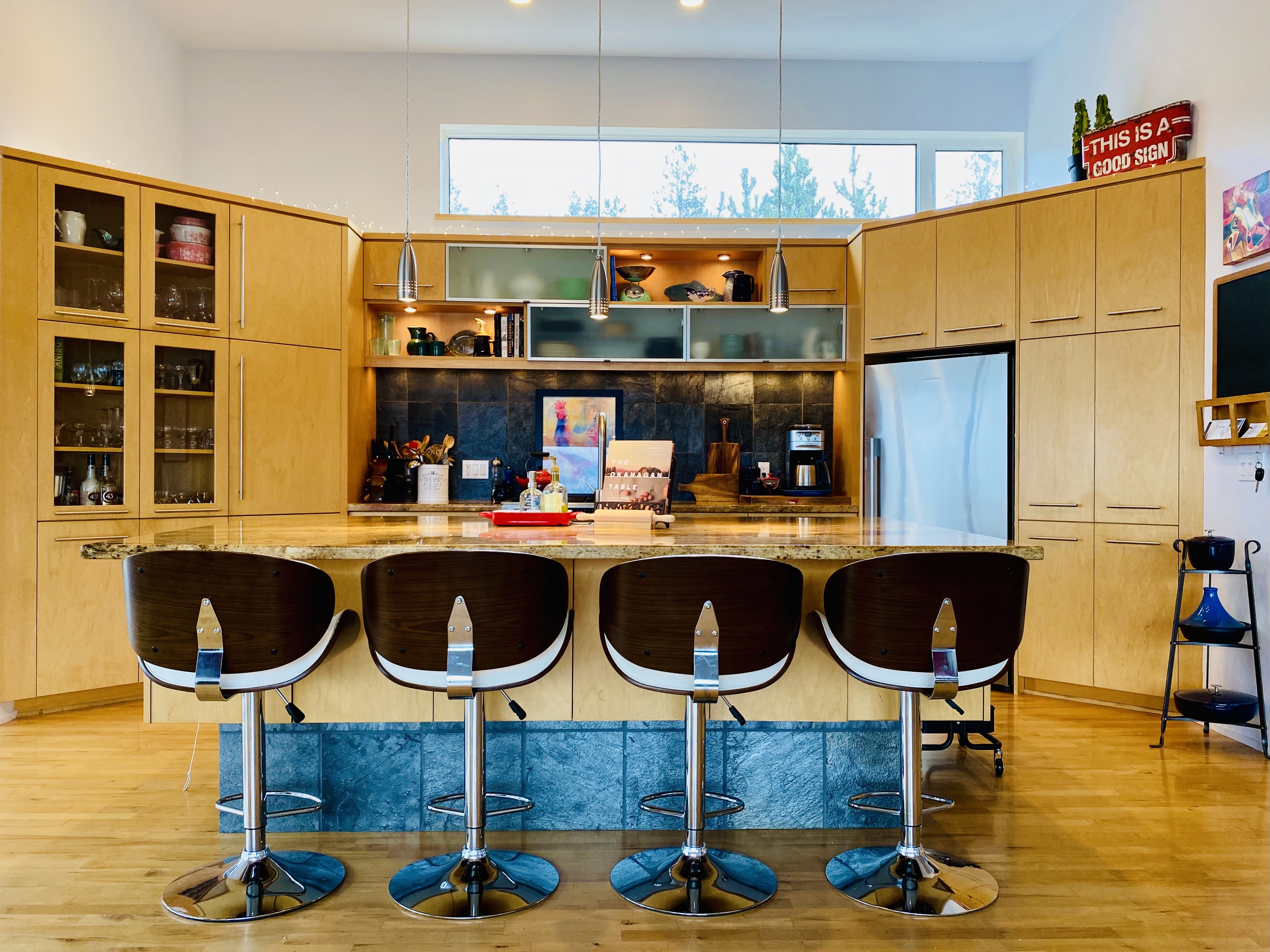 The home also had three gas fireplaces—in the living room, den and office—adding warmth to the home. 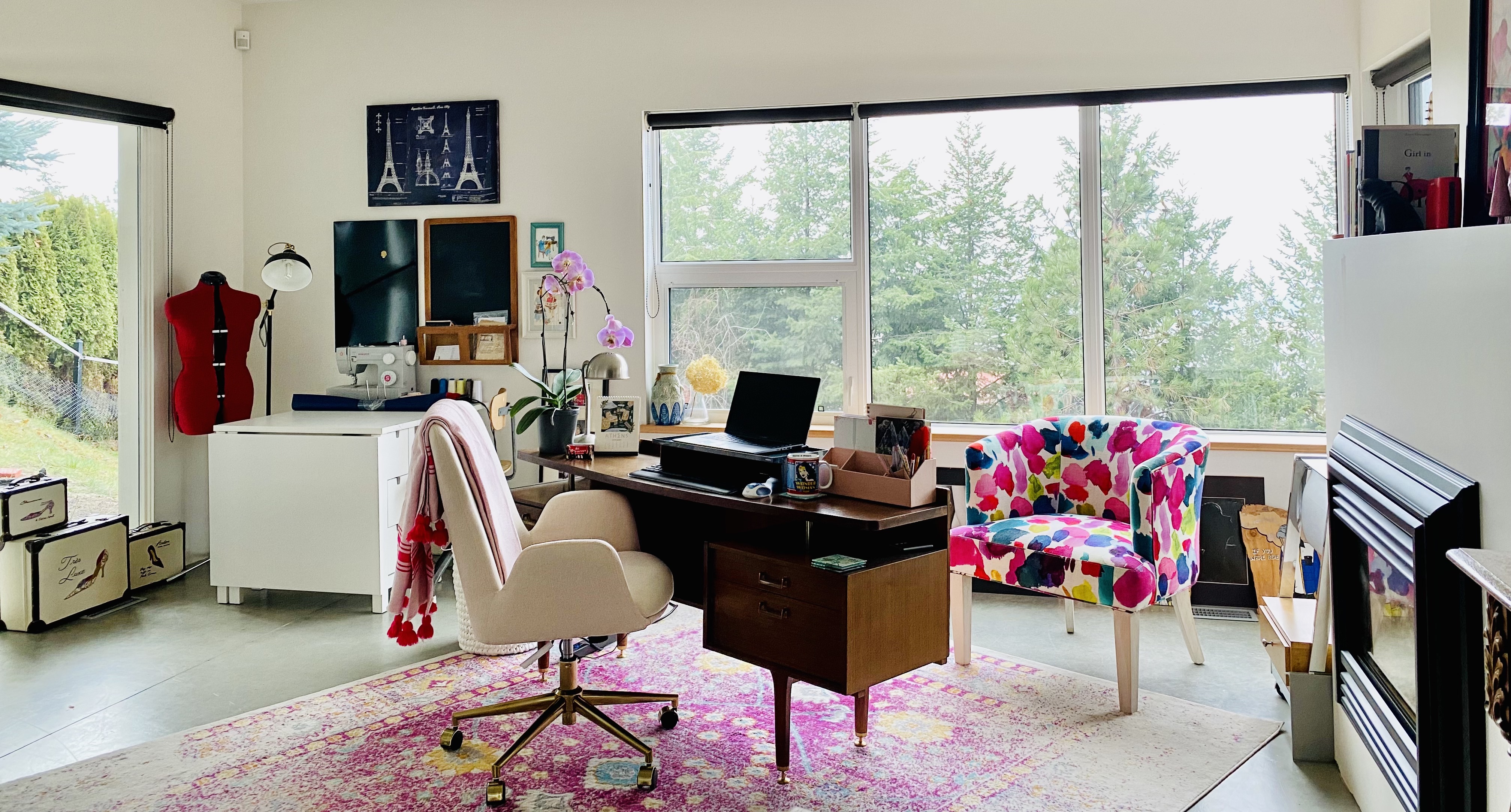 There were also long rectangular windows, located high up on the walls, which flooded the house with natural light at all hours of the day. Three separate balconies offered even more outdoor space.

The couple wanted to act quickly.

On May 15, they put in a conditional offer of $1.7 million, at full asking price. That sealed it, with a closing date of July 31.

Then, they turned their attention to their Toronto home. On May 25, they listed it for $1.95 million. The couple anticipated a rush of interested buyers. There were plenty of viewings early on, but by June, they were down to just one or two per week.

“It was like someone turned off the tap on the Toronto housing market,” Sally says.

Weeks passed. They wondered if they should take the house off the market. All the initial excitement about their new home in B.C. had turned into stress over selling their place in Toronto.

The couple thought about what would happen if they couldn’t sell, including whether they could take on the costs of bridge financing or if they could even afford to keep both homes.

After keeping firm on their original asking price, Sally and John eventually agreed to consider below-asking bids. On July 18, a couple made an unconditional offer of $1.75 million, with a closing date of July 26. Sally and John accepted.

The outcome: On July 26, Sally and John began their trek across the country, with their Honda Pilot packed to the brim with enough stuff to get by until the moving trucks arrived in Kelowna.

They gave themselves five days for the 36-hour drive, stopping at some of the kitschy roadside attractions, like the Wawa Goose and the Moose Jaw Moose.

But as they headed west across the prairies, smoke from the forest fires grew thicker. By the time they arrived in Banff, they couldn’t see the mountaintops. When they arrived in Lake Country, the smoke was so thick that they could barely see the cars in front of them.

“The fire was frighteningly close,” Sally says. “We were preparing to evacuate if necessary, listening closely to updates from the province.” Thankfully, they were safe.

Once they took possession of the house, it was time to decorate. Before their furniture arrived from Toronto, they painted the house a cool off-white. The couple purchased new furniture for their bedroom and dining room, but made sure to avoid big chunky items that would block the views. It cost approximately $10,000 to furnish the place.

Other projects are in the pipeline. They’ll update the primary bathroom and add a second sink. With John doing most of the work, he estimates those materials will cost about $10,000. They also plan to add a backyard deck on the steep hillside, for an additional $60,000.

The couple can’t get enough of the view. Sally says she’ll stare out at the mountains while she’s cooking or having a morning coffee. Their interactions with wildlife have also changed—instead of watching raccoons sift through garbage bins, they get to see deer trampling through the trees.

They’re also enjoying the location of Lake Country. It takes less than half an hour to drive to Kelowna and Vernon, and about ten minutes to get to Kelowna International Airport. Just like back in Cabbagetown, they’re close to a butcher shop, bakery and grocery stores.

Sally and John have also been checking out a bunch of the wineries in the Okanagan Valley. And John already purchased a golf pass for 2022.

They love their new life, but still think about Toronto every day. They miss their family and friends the most.

Did you move to Toronto during the pandy? We’d love to hear about it: realestate@torontolife.com