Who: Joshua Karam, 43, CEO at Hyr, a hiring app for the hospitality industry, and Erika Mozes, 43, COO at Hyr. 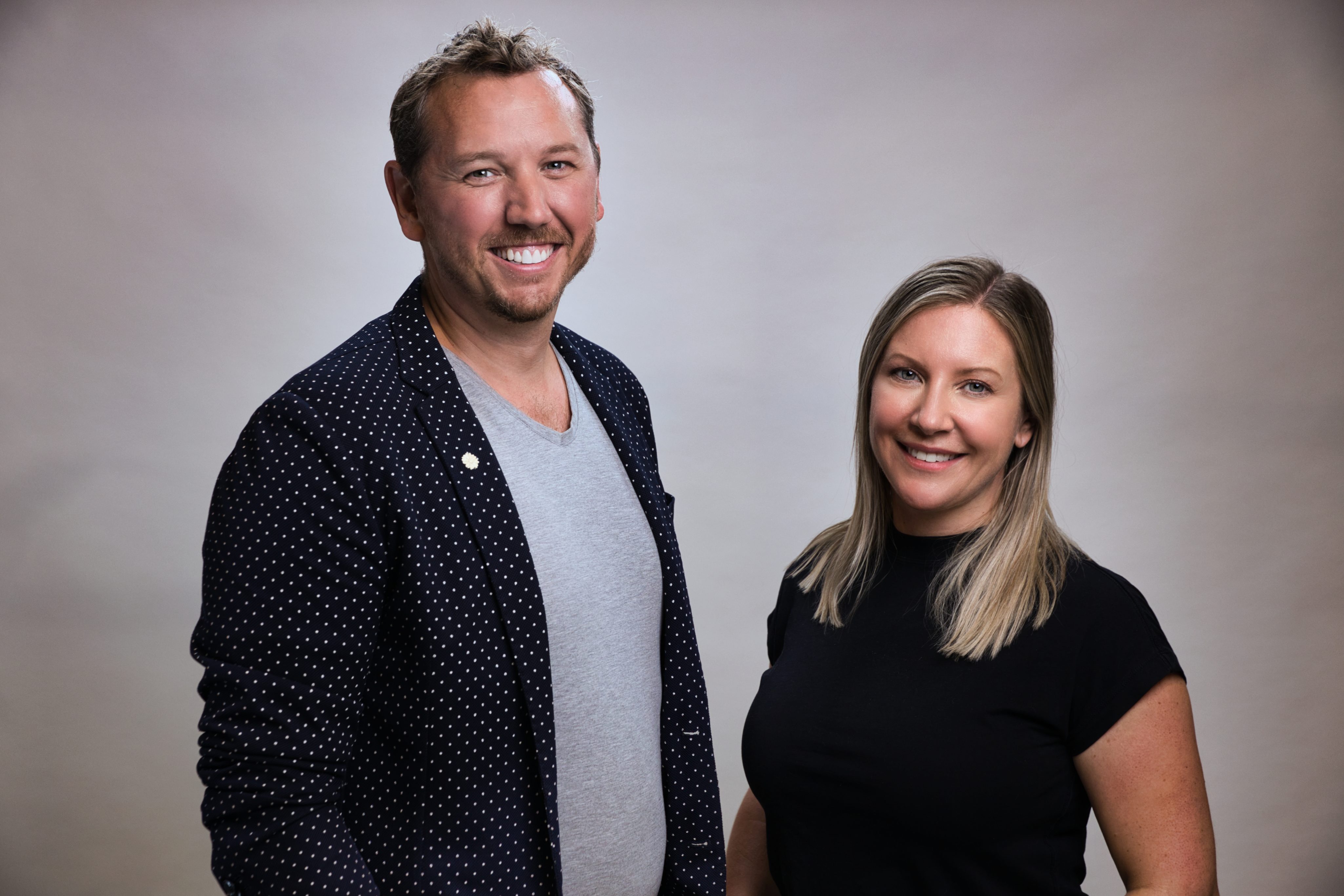 The history: Josh and Erika both grew up in Ottawa. They first met in 2014, when a mutual friend introduced them during a night out on King West.

At the time, Erika rented a one-bed condo at King and Portland, paying $2,000 a month. Josh lived with his daughter, Olivia, in a one-bed-plus-den condo just across the street, for which he paid $575,000. He converted the den into a bedroom for Olivia, who was 10 at the time.

A year after they began dating, Erika moved into Josh’s condo, giving up the lease on her rental. And a few months after that, the couple started their own company, Hyr, an app that helps hospitality businesses connect with shift workers.

In 2016, they moved to New York City—where they headquartered Hyr—and rented a two-bed apartment on the Lower East Side, paying $3,300 (U.S.) a month, while holding on to their King West condo. The couple split their time between Toronto and New York. Olivia, who lived with her mother in Burlington, would also split time with Josh and Erika at their King West condo and Lower East Side apartment.

As the couple got older, the chaos of NYC made them want a more relaxing place to call home when they returned to Toronto. So, in 2018, the couple sold their King West condo for $652,000 and rented a three-bed house in the Beaches, paying $4,000 a month.

When the pandemic hit, Josh and Erika were in New York, but they flew back to Toronto as soon as the situation escalated. They were able to run their company remotely from their Beaches rental, while also pivoting to start a live virtual events version of their original app.

By the end of April 2020, the couple decided not to renew the lease on their Lower East Side rental. They hired a company to move the contents of that apartment to a spare bedroom in their Beaches rental. In May, Josh and Erika were feeling burnt out from working and moving, so they rented an Airbnb in Haliburton to get away for a week.

As they were driving back home, Josh and Erika talked about how much they’d enjoyed their time up at the cottage.

They thought about booking something again for the month of August, but realized that money could be put toward a down payment to buy a second property instead. And since they were giving up their New York City rental, those savings would also help bolster their funds for a purchase.

Another bonus: with the rise in remote working, they could easily run their company from anywhere with good Wi-Fi, while enjoying the peaceful surroundings during their time off.

The hunt: The couple arrived back in Toronto on a Friday, and Josh immediately started searching for cottages online. By Monday, he had found a listing for a three-bed, one-bath cottage 30 minutes’s drive north of downtown Haliburton, listed for $600,000.

The next day, they drove back up to Haliburton to view the property, located on a quiet lake with only a few other cottages. The two-storey building had vinyl siding: 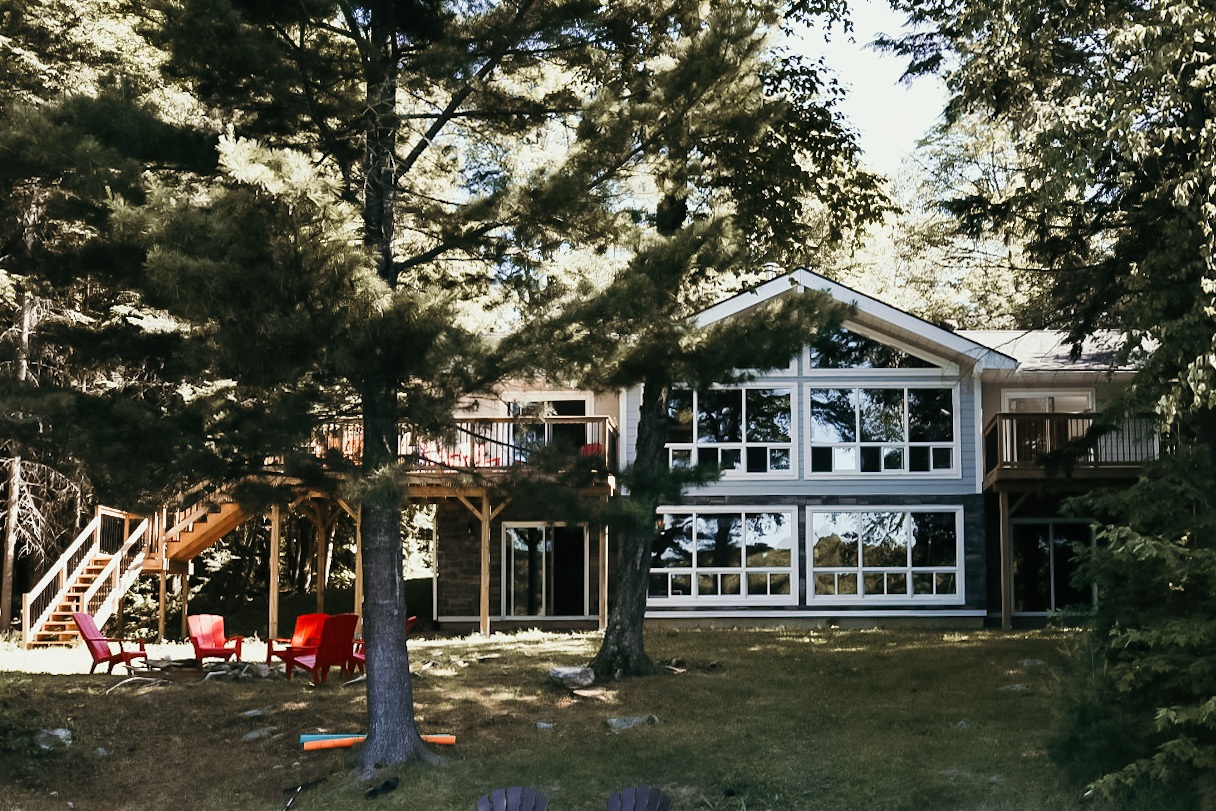 Erika loved the large L-shaped kitchen, which had plenty of storage: 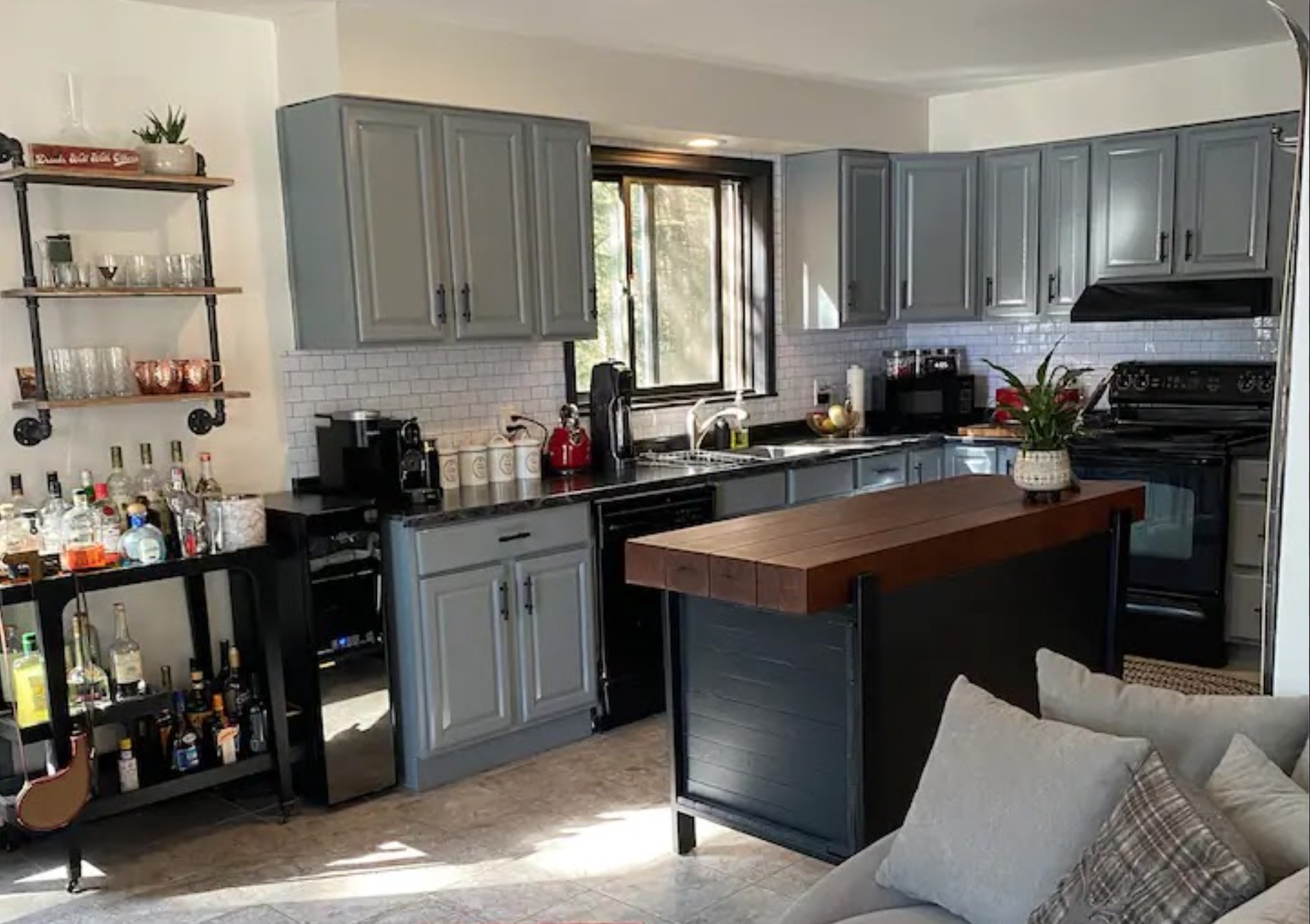 The great room had enough space to host 10. Josh and Erika imagined entertaining groups of family and friends here (once it was safe again): 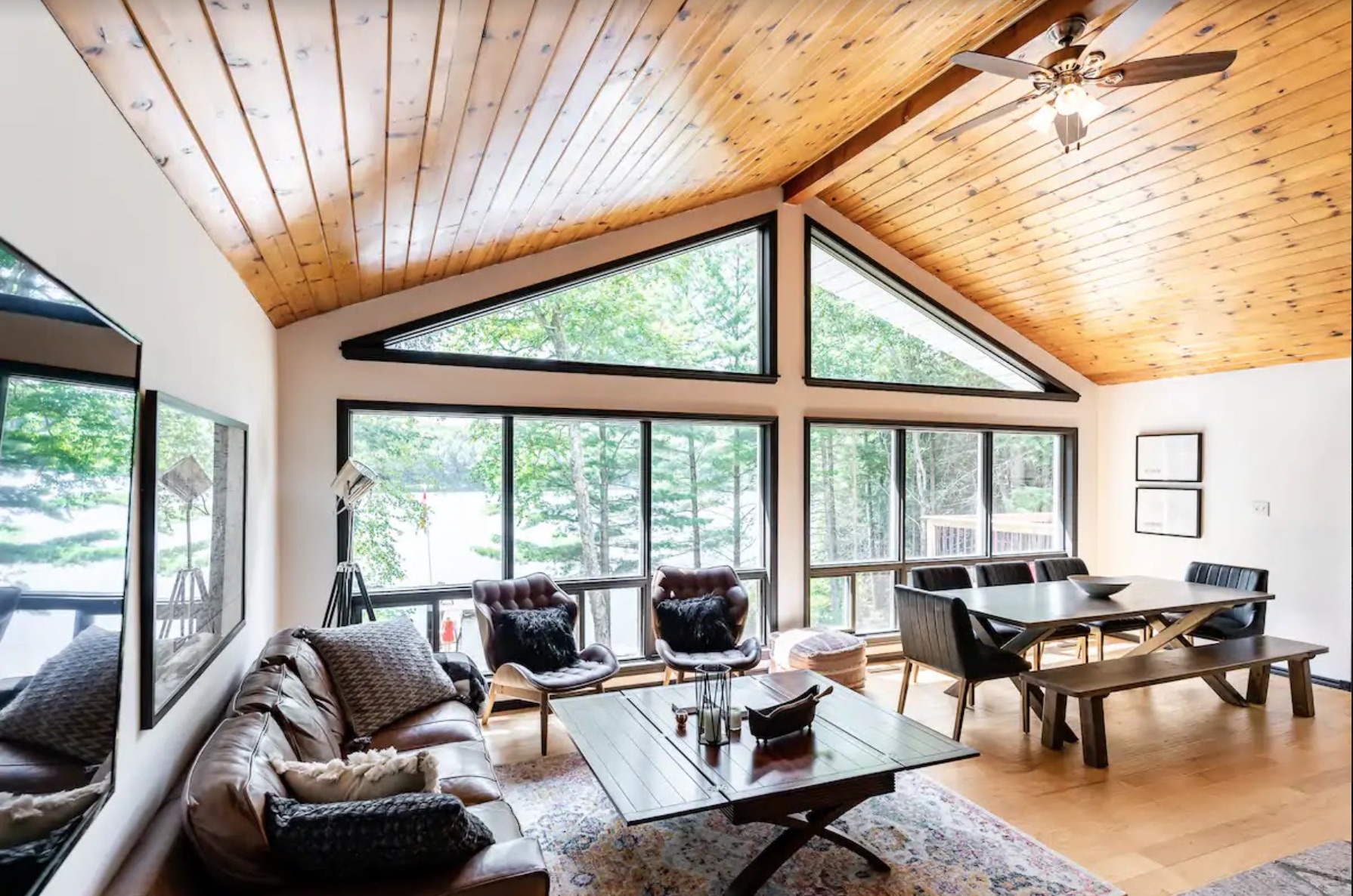 It also had a couple of recently renovated back decks. Here’s one of them: 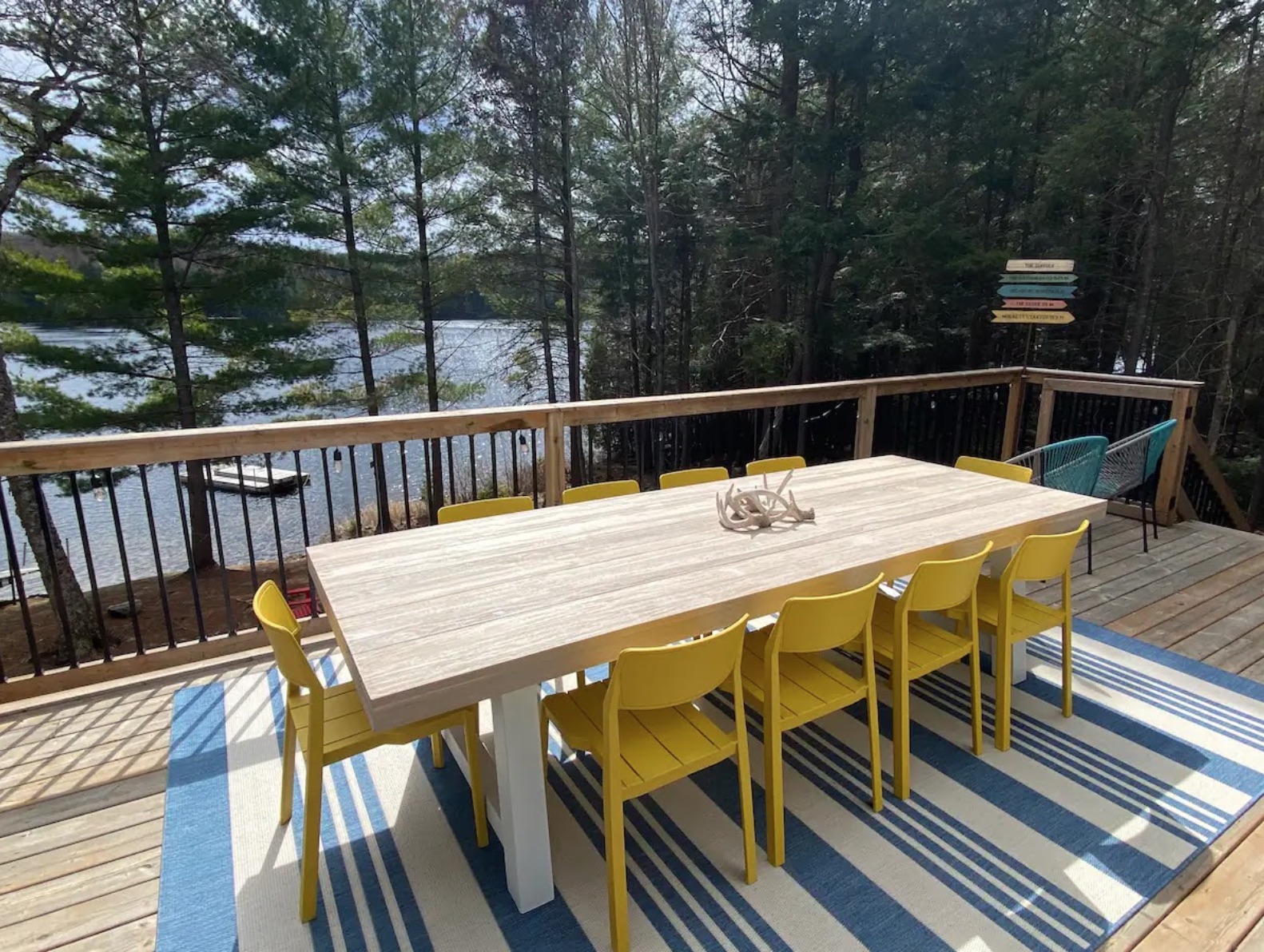 The bedrooms and bathroom were all on the first floor: 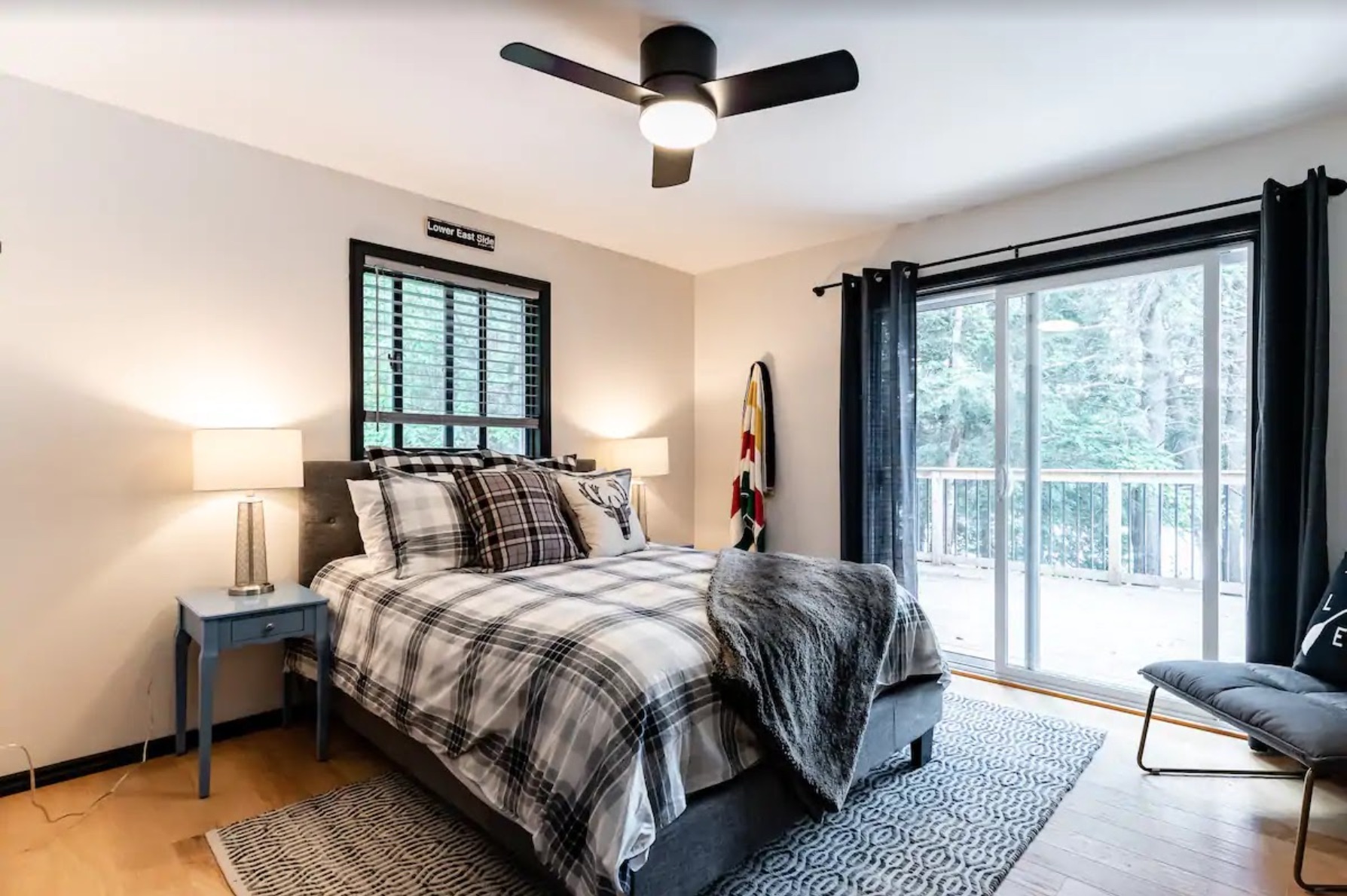 And the lower level was unfinished, but the couple saw the potential to renovate it and double their living space.

Both Josh and Erika are quite active and they loved all the recreation options nearby, like mountain biking and hiking trails in the summer and cross-country skiing and snowshoeing trails in the winter.

A day after viewing the property, they submitted an offer for $560,000, taking advice from their real estate agent, who thought they could get the place for under asking since it had been on the market since last year. The seller countered with $570,000, which Erika and Josh accepted, with a closing date of June 28.

The outcome: The couple moved in right away, bringing up a U-Haul with some of the things from their New York City rental, plus a few other furniture items they bought from Article, Structube and Kijiji.

On the main floor, they painted the walls, trim and kitchen cabinets.

They also added a hot tub on one of the back decks. The renovations took a few weeks and cost about $20,000, but they were able to stay in the cottage as the work took place.

In October, they began working on the lower level. They put in a new bedroom, a full bathroom, a laundry room, a three-person indoor sauna, an entertainment room and a gym.

That fall, they visited a sporting goods store in downtown Haliburton to purchase cross-country skis for the winter. The store was having a blowout sale, and the couple learned that the owners were retiring and closing the shop, which gave Josh and Erika the idea to open a new sporting goods store.

In late December, they rented out a storefront just a block away from the store that closed down, for $1,500 a month. They even hired the salesperson who sold them their cross-country skis to manage the place.

They named the store Delancey Sports because their old apartment in NYC was at the corner of Suffolk and Delancey. (Their cottage, quite fittingly, is called the Suffolk). 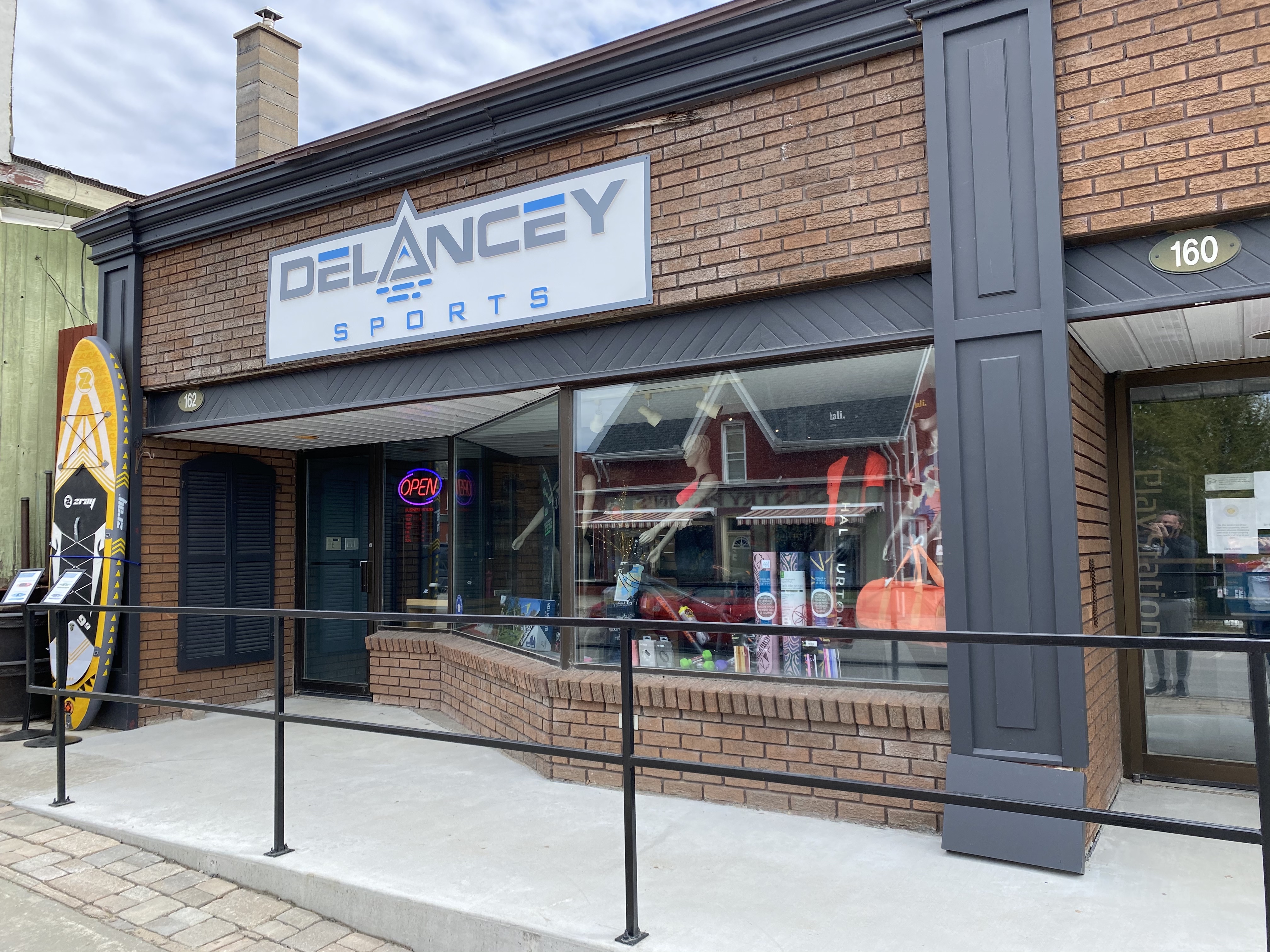 The lower-level renovations at their cottage should be completed by mid-May. Erika and Josh plan to stay in Haliburton for the foreseeable future and even picture themselves retiring there. 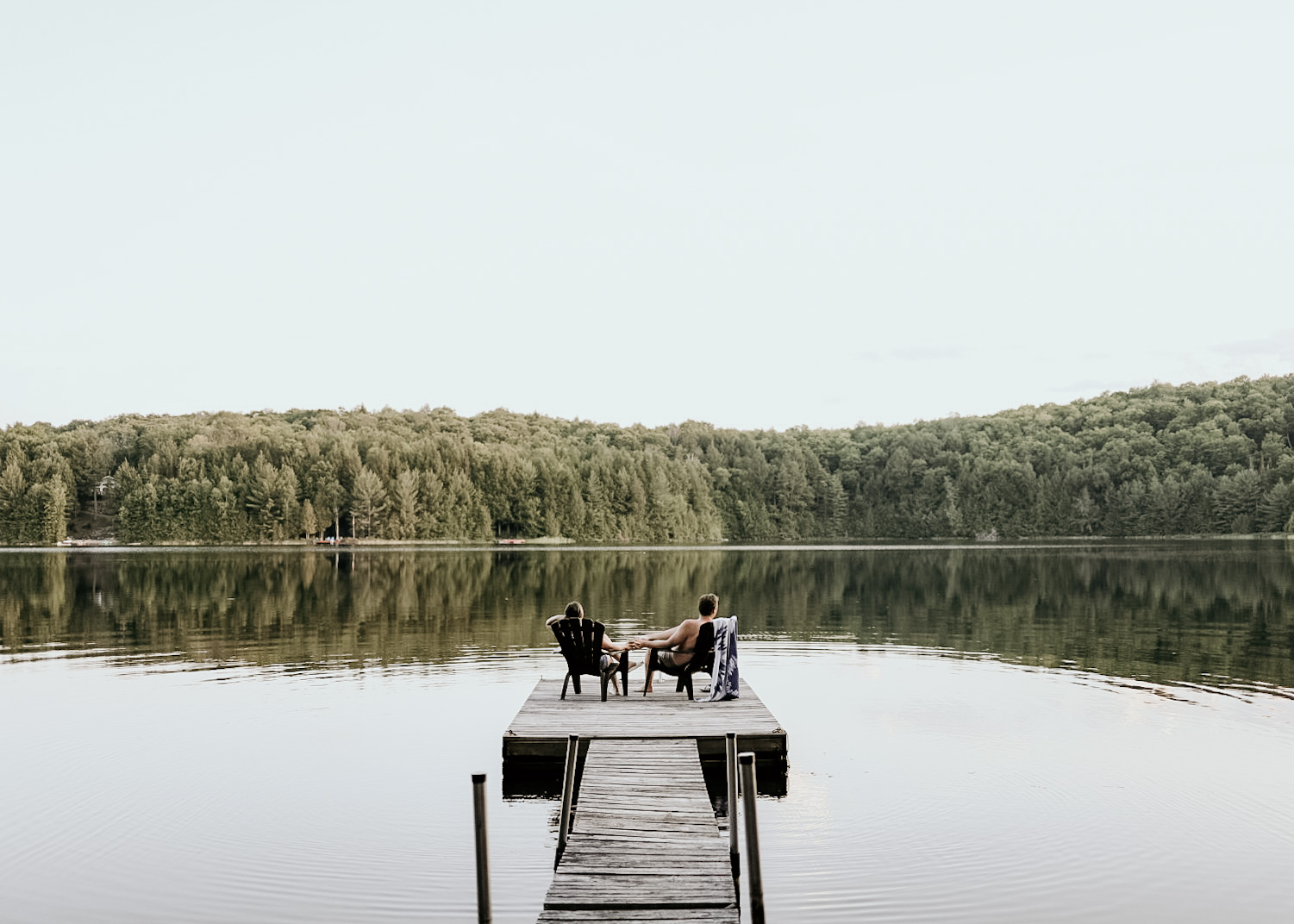 They still have their Beaches rental and will come back to the city about three weekends a month to spend time with Olivia, now 17, who visits the cottage when she can.

When Josh and Erika aren’t staying at their cottage, they rent it out on Airbnb to earn some extra income.

The couple will continue running Hyr remotely even once the pandemic ends. They hope to invite friends and family to stay at their cottage, assuming restrictions loosen up a bit.

In the meantime, they’re enjoying the peaceful surroundings in their new home, taking coffee breaks on their dock and going out on mountain biking trails on the weekends.

And, given that they now own a sporting goods store, they’ve kitted out their cottage with all the latest water sports gear: a canoe, kayaks, paddleboards and even a water trampoline.