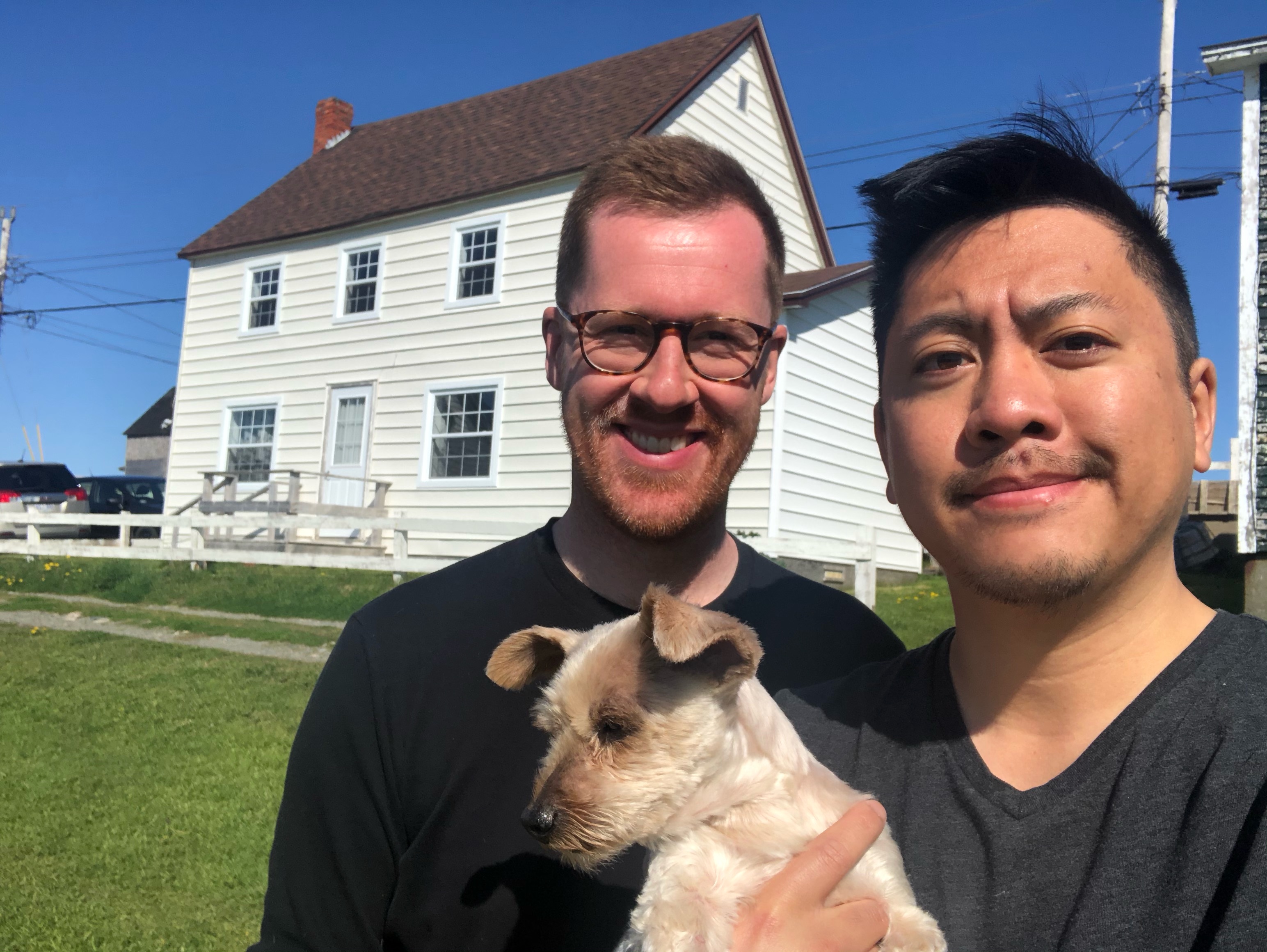 When Covid hit, in March 2020, they both switched to working from home. They set up workstations at opposite ends of their dining table, heading upstairs or into the backyard if one of them needed to take a call.

By September, the couple was feeling cooped up in the city and was eager to travel somewhere for a getaway, but they knew they wouldn’t feel comfortable flying internationally for at least a few years. Since remote work was now possible, they thought about purchasing a vacation property.

A place north of the city didn’t appeal to Derek and Sam because they didn’t want to battle highway traffic on the 400, only stay at the cottage for 48 hours, then have to drive right back. Plus, they thought it would be too expensive to buy in cottage country, where property prices were going bonkers.

Instead, they wanted a place where they could stay for a month at a time and get to know their neighbours and the community. Since they were planning to stay for longer periods—perhaps even several months at a time—the couple didn’t mind if it took a little longer to get out to their secondary property.

Sam and Derek immediately thought of Newfoundland, where they had visited in 2018. They loved the culture and history of the province. They especially liked Bonavista, a small community of about 3,000 people on the eastern coast, located a three-and-a-half hour drive north of St. John’s.

The people were friendly and welcoming. The town was charming and surrounded by lots of beautiful scenery. Bonavista also had plenty of nice historic homes, along with good restaurants. So, in September, Derek started looking at online real estate listings in Bonavista.

The couple wanted a medium-sized house with an expansive view, whether of a forest, a town or water (anything would have been an upgrade from looking out at their small Toronto backyard). They were hoping to spend under $50,000, which was realistic since they had seen properties priced as low as $20,000.

The hunt: The couple was set on finding a particular style of historic building, called a saltbox house, because they appreciated the architectural heritage of the region. A saltbox house has a long, sloping roof in the back and was a common style of housing on the East Coast in the early 1900s.

In September, Derek found a listing online for a three-bed, two-bath saltbox house in Bonavista for $45,000. It had been on the market for over a year.

The house had vinyl siding and the main floor had a living room, dining room, kitchen, bathroom and laundry area. The upper floor had three bedrooms and another full bathroom (they later learned that this part of the town didn’t get indoor plumbing until the 1980s). There was no basement, which is common for properties in the area.

And the lot was small, with about six to eight feet of land surrounding the home on all sides—but there was a small storage shed on the property. The best part: it was located on a rocky peninsula with a view of the Atlantic Ocean.

A couple of weeks later, in late September, they contacted a real estate agent in St. John’s. On Thanksgiving weekend, in mid-October, the agent drove out to the property and took the couple on a video tour.

The home needed some serious upgrades. There was shag carpeting from the 1980s on the upper level and old laminate flooring on the main level. The stove was installed in the dining room, far from the kitchen. Even still, Sam and Derek saw great potential in the property.

While they were contemplating whether to buy, in early November, their real estate agent told them that another offer had been put in on the property. They were disappointed, but it made the couple more eager to find a place in the area.

A week later, in mid-November, the real estate agent reached back out to say that the original offer had fallen through. So, on November 12, based on advice from their agent, the couple put in an offer of $42,000, conditional on a home inspection.

They found out the hot water heater was broken and would need to be replaced, so, on November 25, they revised their offer to $39,000, factoring in the cost of shipping and installing a new hot water heater in a rural location, along with some electrical and window upgrades that were also flagged during the home inspection. The seller accepted with a closing date of December 22.

Derek and Sam were excited to get a vacation home for a fraction of what it would have cost them in Ontario. And while there are disadvantages to their new property being so far from Toronto, they see it as being part of the adventure and what makes it unique. They felt like the extra time it would take to get out to Newfoundland would be well worth it.

The outcome: In February 2021, Derek and Sam spent three days (and a ferry ride) driving out to Newfoundland, staying in a hotel and a private sleeping cabin on the ferry along the way. They arranged for a new hot water heater and Wi-Fi to be installed ahead of time, and they brought a flat-pack bed, table and chairs, and two weeks of groceries with them for their quarantine period.

As they drove up to the property, they were excited to see the Atlantic Ocean from the road in front of their new vacation home.

Sam and Derek are planning to renovate their home and bring back some of its original character. On the top floor, they’ll restore the original wide-plank wooden flooring (which is currently under three layers of carpeting).

Ceiling tiles on the main floor will be removed, gaining six inches of ceiling height and exposing the home’s original wood beams and beadboard.

They’re also renovating the bathrooms and kitchen. The renovation work is starting in mid-June and is expected to be completed in September. During that time, the couple will drive back to Toronto and stay in their Junction Triangle home.

They hope to spend under $35,000 on the renovations. And once they save up again, Derek and Sam plan to remove the vinyl siding to expose and restore the original clapboard exterior.

Neighbours have told them it was originally painted orange. Traditionally, homes in the area had stained glass front doors with colours associated with the builder of the house. The couple plans to install a similar style of door reflecting the colours of Derek’s Scottish family tartan, adding a personal connection.

Meanwhile, the couple has settled into Newfoundland life. As a biracial gay couple from Ontario, they were initially worried about moving to a rural neighbourhood. But their neighbours, who are mostly seniors, have been friendly and kind.

The seller of their vacation home is their neighbour across the street (the property originally belonged to her father) and she’s brought them homemade jam and knitted them mittens in the winter. Other neighbours have brought them moose meat and cod as welcoming gifts.

Derek and Sam have been enjoying the slower pace of life in Newfoundland. After work, they’ll walk a few steps down to the ocean to watch the sunset. And on the weekends, they’ll go out for hikes on nearby trails and explore the area’s unique geological formations (Bonavista was recently named a UNESCO Global Geopark for its fossils and rock formations).

The rocky terrain reminds them of Iceland and Ireland. Once life goes back to normal, Derek and Sam plan to head out to their Newfoundland home twice a year for four or five weeks at a time, doing a combination of remote work and vacationing.

In between, they’ll rent out the vacation home to friends or on VRBO. “Our hope is that friends and family will come and stay here so that they can see how great Newfoundland is,” says Sam.