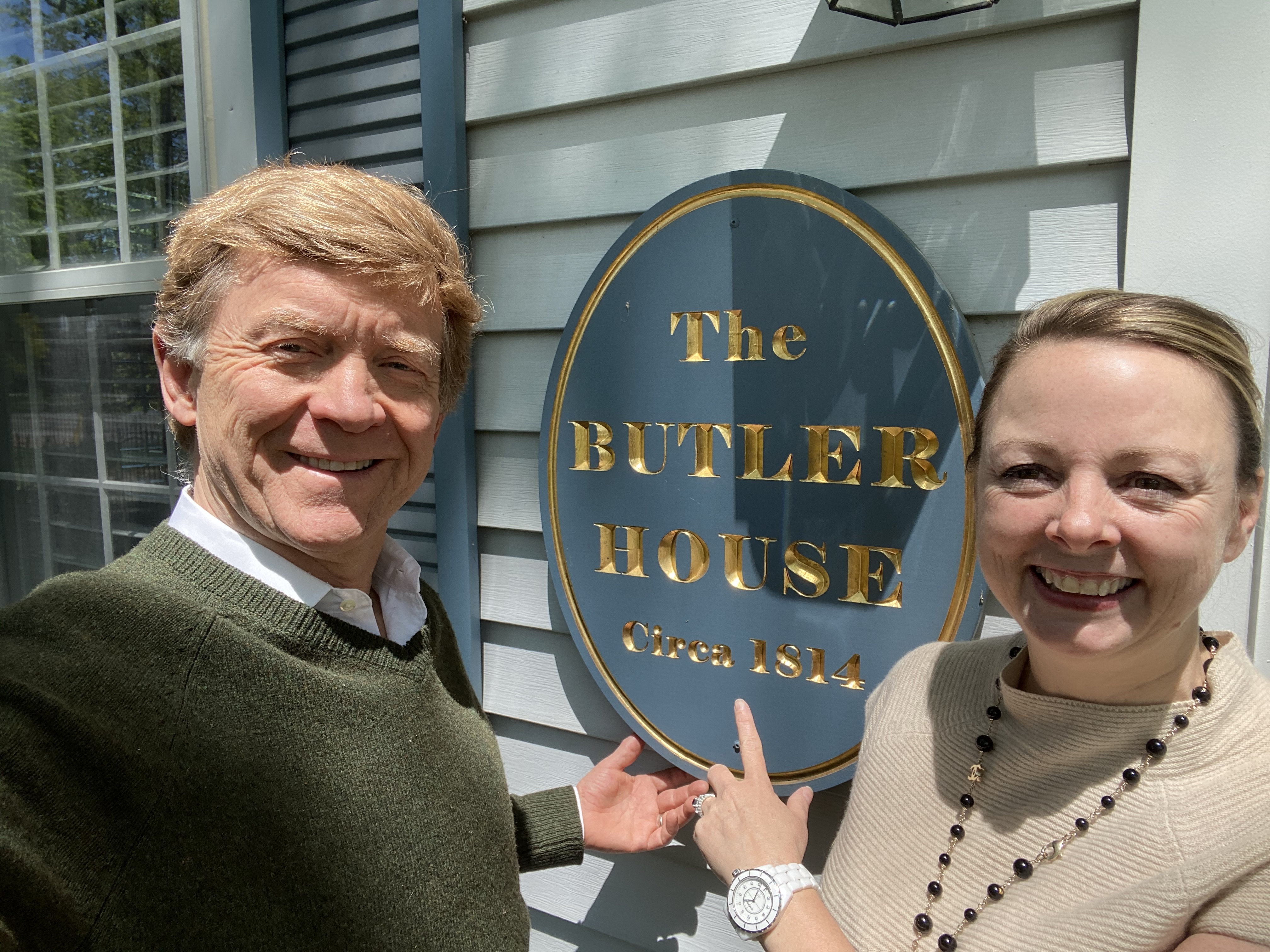 The history: In 2015, Norm and Jennifer met at a conference in Chicago. The two hit it off over their shared rural Ontario upbringings—Norm grew up close to Sudbury and Jennifer was raised near Omemee—and started dating.

Jennifer lived in New York City, while Norm resided in Mississauga. For the next three years, they took turns visiting each other on weekends.

Norm and Jennifer would typically head to Pearson or LaGuardia on Friday afternoons, before taking the one-hour flight to see the other. Hours before sunrise on Monday mornings, they’d grab a return flight and rush to make it in time for work at 9 a.m.

Their job commitments meant neither of them could move, so the exhausting weekend routine continued even after they got married in 2018.

They appreciated having the opportunity to see each other over most weekends and holidays. But after nearly four years of delayed flights and early Monday mornings, they longed for the day they could both retire and escape the rat race.

The couple decided to buy a retirement property they could use as a weekend getaway in the short term. In 2019, they set an $800,000 budget for a three-bedroom, two-bathroom house in Ontario, within a three-hour drive of Toronto.

Norm and Jennifer were avid kayakers and wine enthusiasts, so they also wanted a place near the water and several wineries.

The hunt: To celebrate New Year’s Eve in 2019, the couple booked a stay at the Queen’s Landing Hotel in Niagara-on-the-Lake. Since they were in town, they figured they might as well tour a few listings in the area.

One of their first viewings was the Butler House, sited in Niagara-on-the-Lake’s historic old town. The two-storey house was built in the late 18th century and named after John Butler, an American Revolutionary War militia leader who reputedly once lived in the house.

The house had a white colonial façade and blue window shutters. At 2,000 square feet, the interior contained three bedrooms, four bathrooms and a finished basement.

Jennifer, who has a Master’s in decorative art, holds a deep appreciation for anything old. As she toured the house, she envisioned filling the place with Regency-era antiques in homage to the period in which the home was built.

It was already decorated with beautiful antique blue and white porcelain dishes and paintings of 19th century-era English countryside.

She also loved the home’s four-poster beds, exposed ceiling beams and original pine floorboards, rumoured to have been salvaged from buildings destroyed during the War of 1812.

The sellers had operated the Butler House as a bed and breakfast, so the home was in excellent condition despite its age. Here’s a look at the inside: 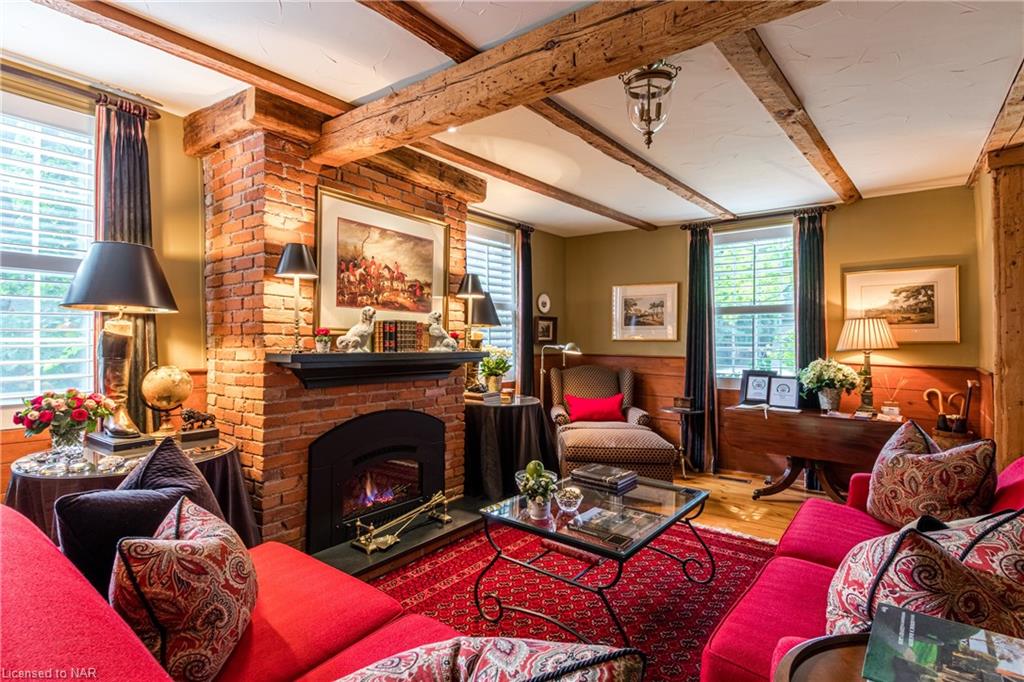 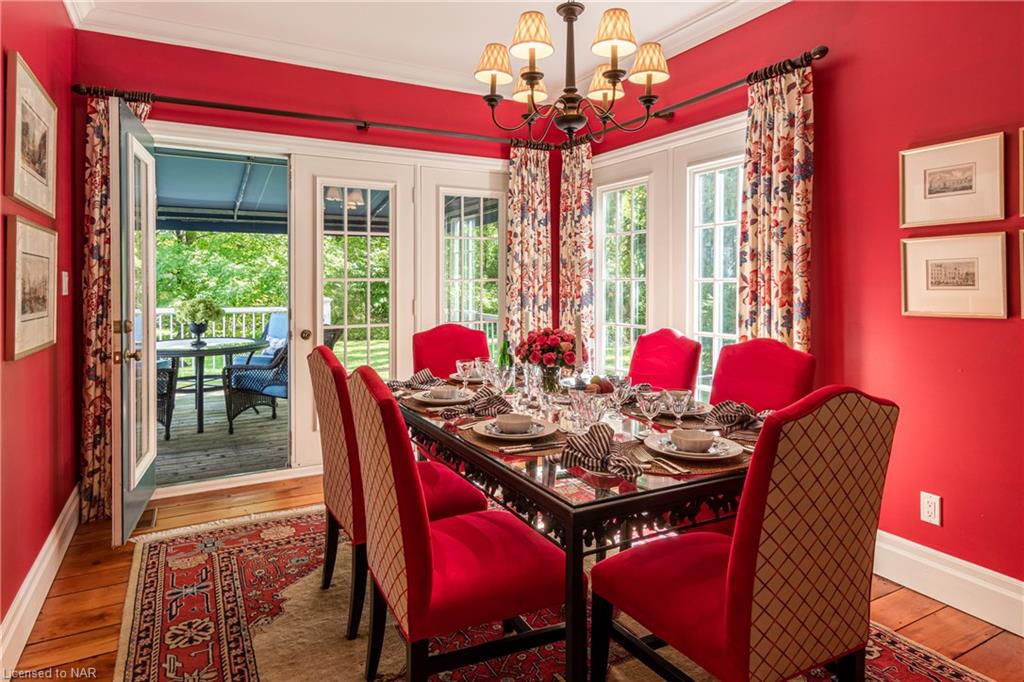 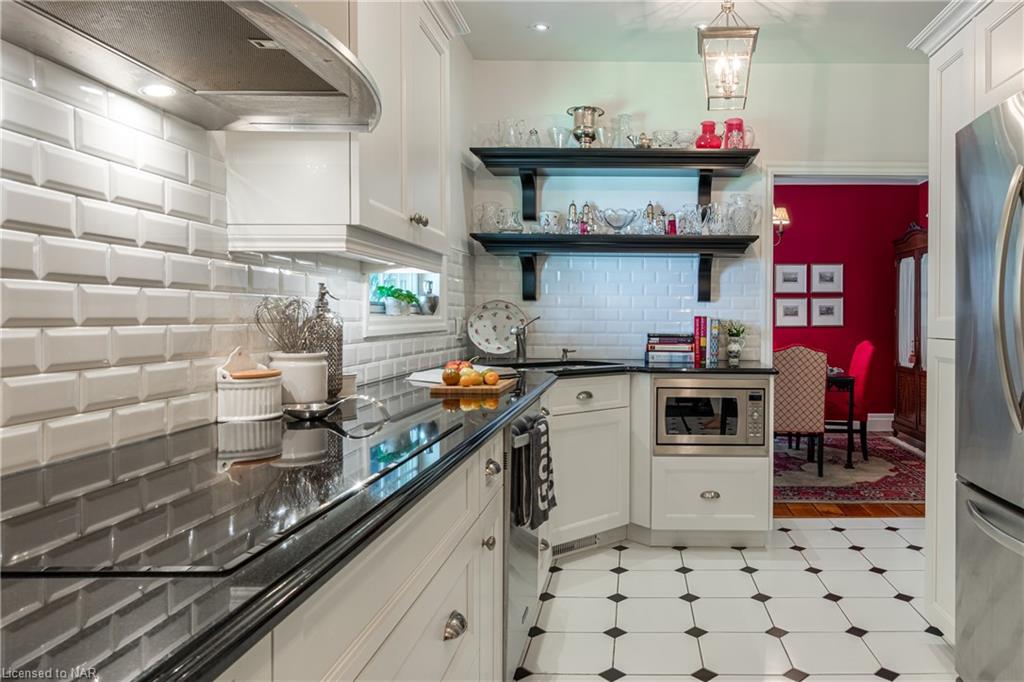 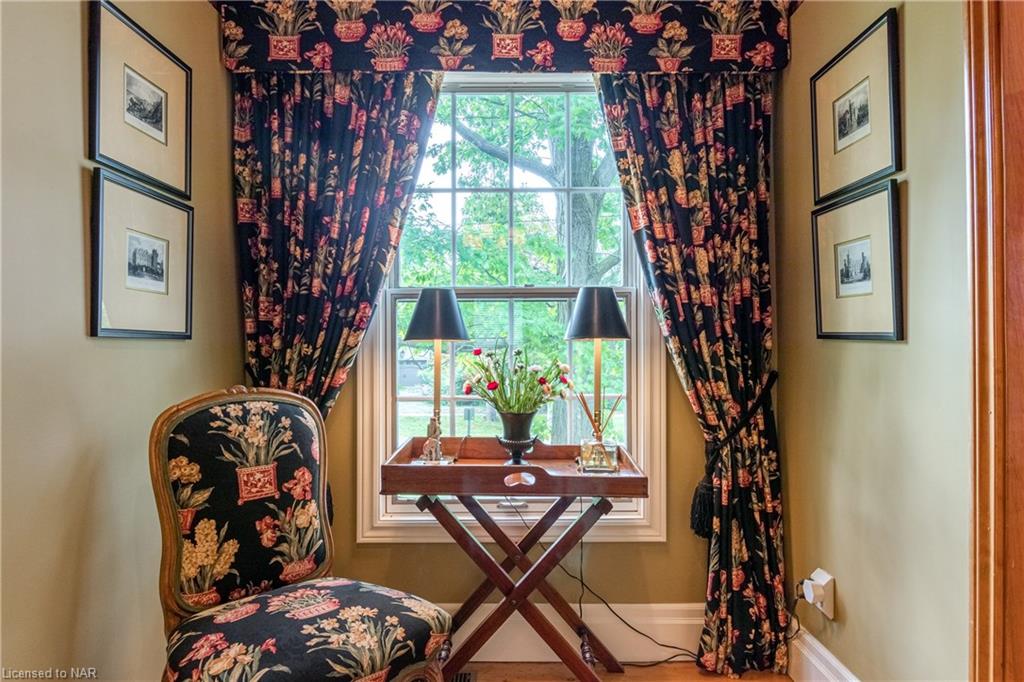 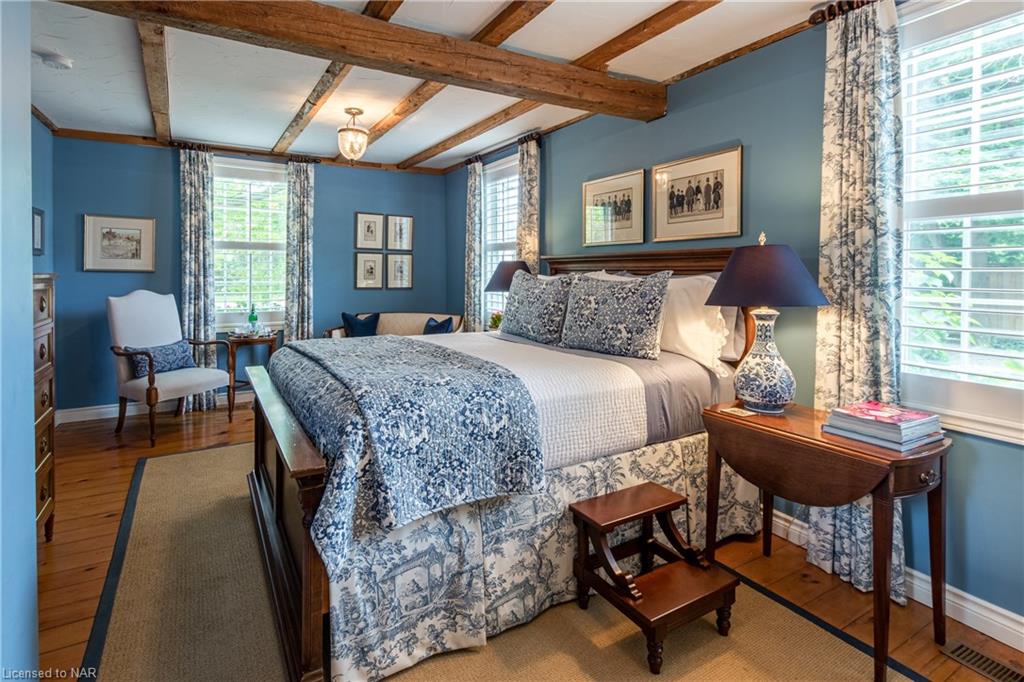 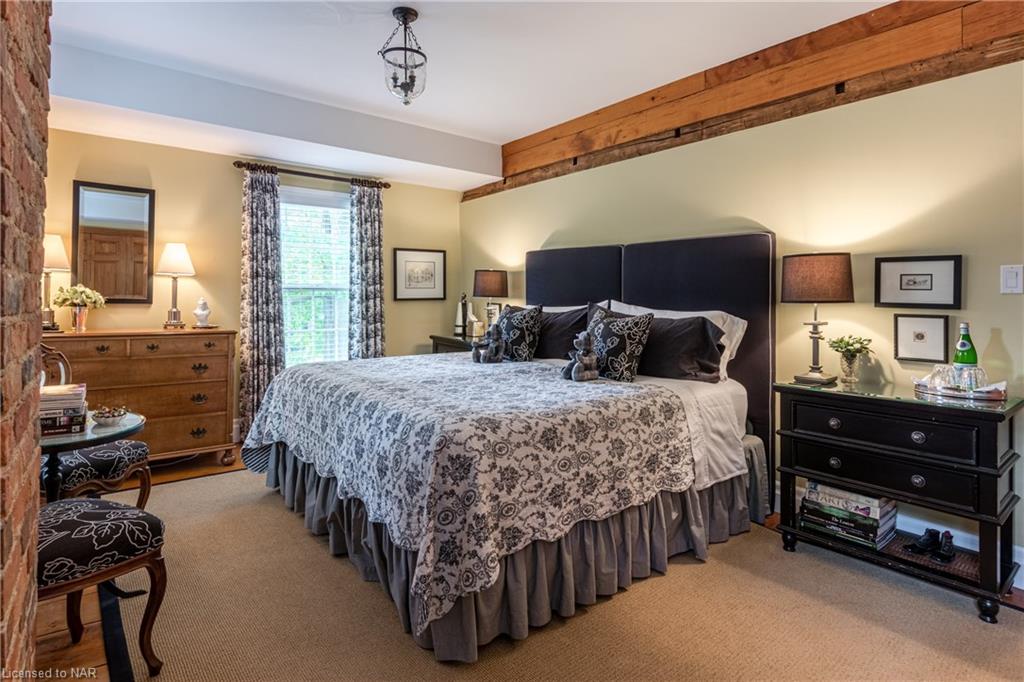 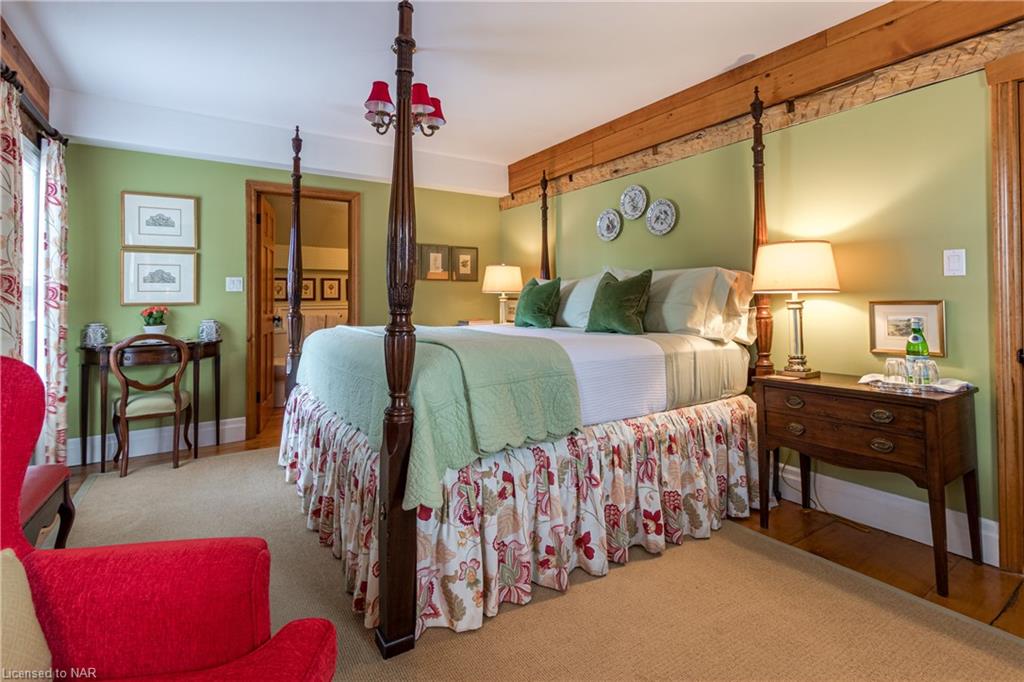 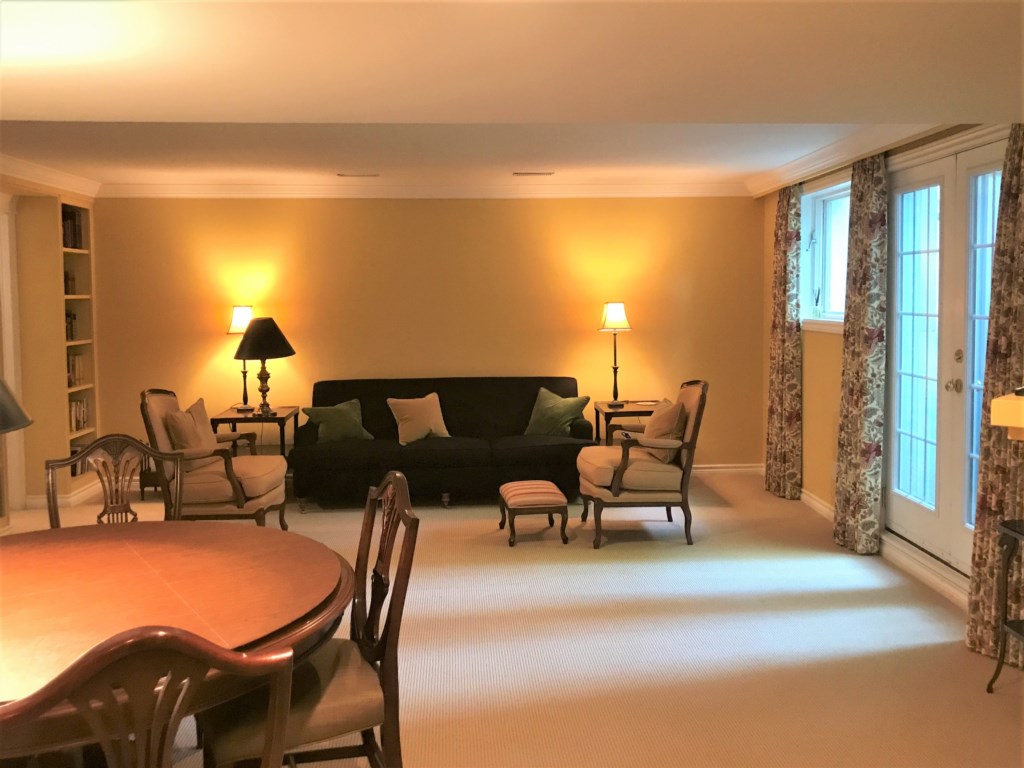 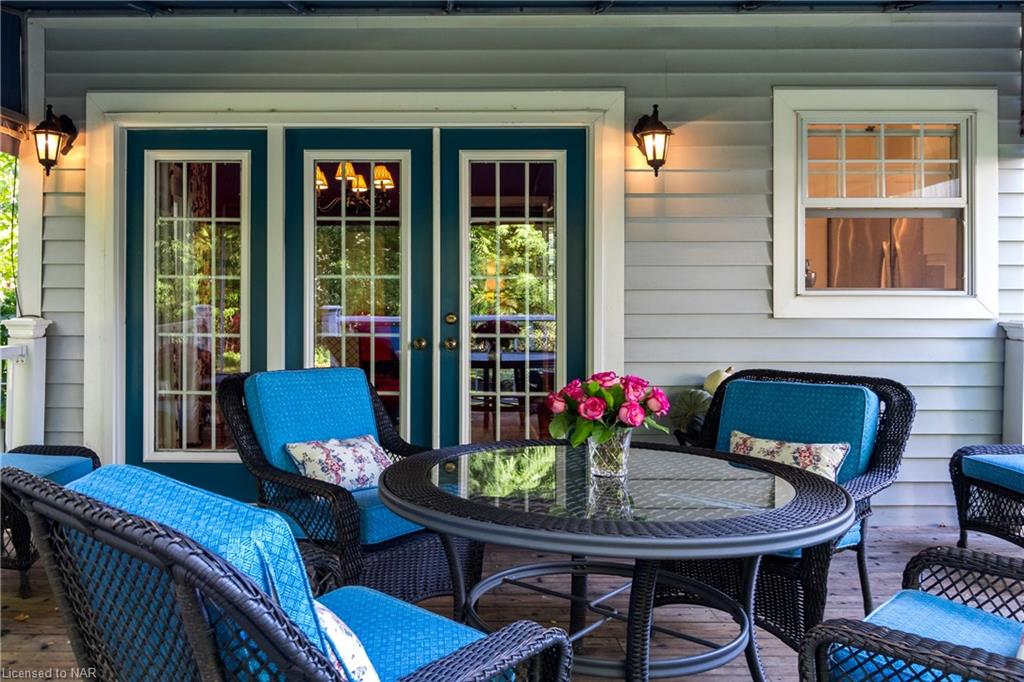 The only thing that needed fixing was the run-down furnace, which the couple estimated would cost about $12,000 to replace. As for location, it was a short walk from the Shaw Festival Theatre and lots of shops and restaurants. Bicycle trails, wineries and the Niagara River were all nearby, too.

However, the house was smack dab in the middle of one of Canada’s most appealing tourist destinations. The couple figured they could comfortably cover the mortgage and monthly expenses by leasing the place as a short-term rental whenever they weren’t using it.

Plus, the home had been listed on the market the year before, with no takers. So Norm and Jennifer felt confident they could get it for below asking.

The outcome: Norm and Jennifer were excited to spend an inaugural weekend at the Butler House once they took possession in April. But then the pandemic came along.

The couple suddenly found themselves in lockdown at their respective homes with no end in sight. That’s when they had an idea: since they were stuck working remotely anyway, why not stay at the Butler House for longer than a weekend?

The sellers had left the home furnished, which meant Norm and Jennifer wouldn’t need to wait for stores to reopen before they could buy furniture. That April, they moved in.

As case numbers rose and lockdown persisted, the couple continued working remotely for months on end. So they ended up living at the Butler House for the entire summer.

They updated the furnace and Norm converted the basement into his office, while the main floor dining table became Jennifer’s workstation.

When they weren’t working, they enjoyed tranquil sunny days barbecuing and taking long walks. It was the first time they’d ever spent that much time together.

Norm would often wake Jennifer up with breakfast in bed, a luxury they didn’t usually have time for in their old rushed weekend routine.

Oddly enough, the chaos of the pandemic gave them a chance to slow down and appreciate the simple pleasures of each other’s company.

As restrictions eased in the late summer, Norm and Jennifer went back to work and rented out the Butler House for more than $333 a night.

When lockdowns returned in the winter, Jennifer quarantined for two weeks after crossing the border and the couple reunited in Niagara-on-the-Lake. They’ve been at the Butler House ever since.

The couple kayak often together, and they look forward to enjoying the Shaw Festival and Niagara’s wineries once businesses open up again.

For the time being, Jennifer is holding off on drastically changing the existing décor. But she has already purchased a circa 1810 Regency parcel-gilt mirror, which she installed in one of the bedrooms.

They aim to eventually retire at the Butler House and decorate it with even more Regency-era antiques. But once short-term rentals are permitted again, they plan on moving back to their respective homes and visiting together whenever the Butler House isn’t in use.

They’re aware their hectic weekend routine will soon return as the world reopens, but they’re enjoying the brief reprieve the pandemic has offered them. And they also know they now have a beautiful house of their own to look forward to every time they reunite.