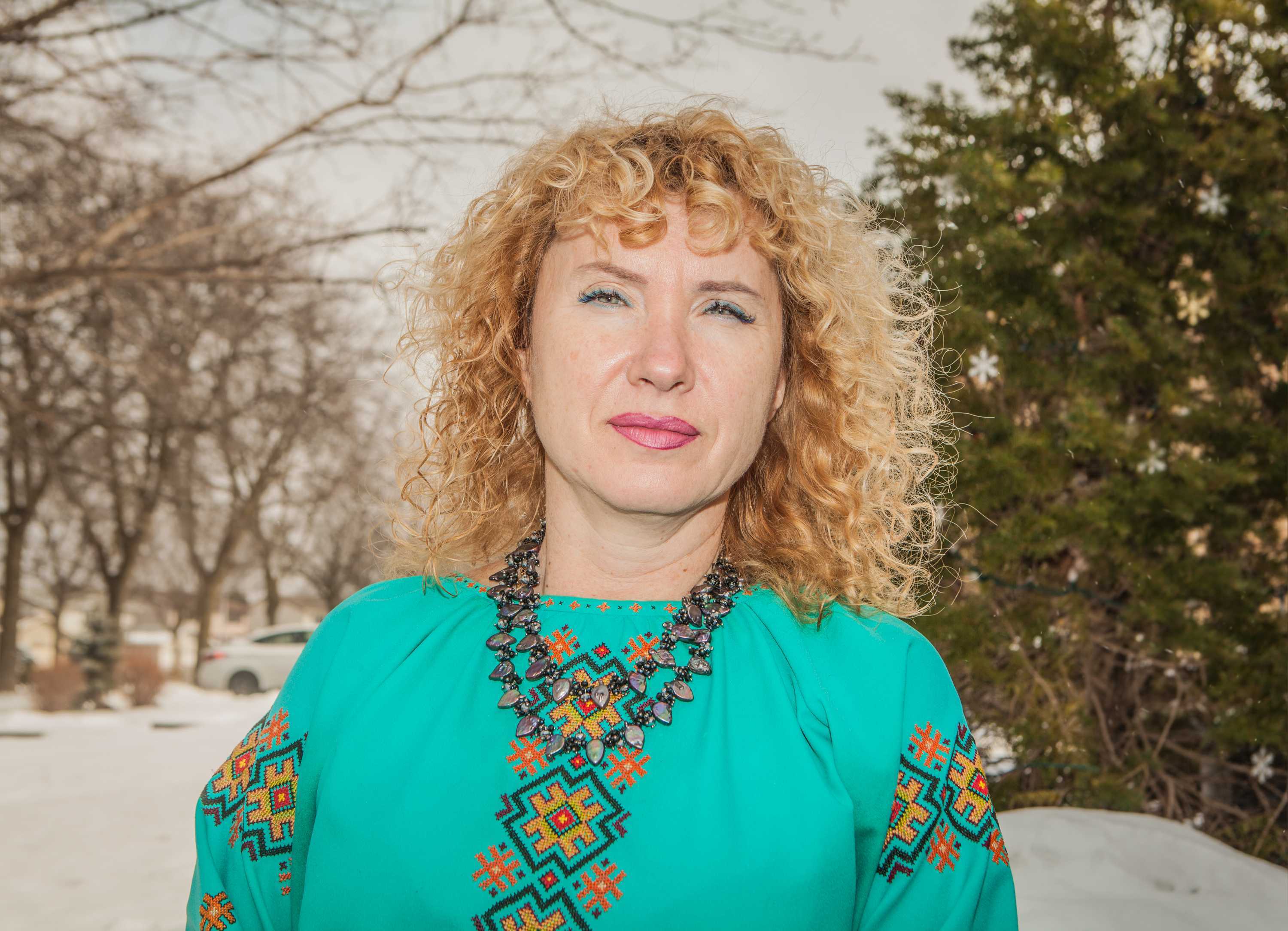 In January 2021, Ukrainian-Canadian Tatiana Sunak left her home in Mississauga to take the top job at a prestigious school in Kyiv. When the Russian attack began, she and her partner tried to flee, but the airports were closed and the borders were clogged. Here’s how they made it out.

—As told to Ali Amad

“I was born and raised in Lviv Oblast, a province in western Ukraine. In the early 1990s, I moved to Canada with most of my family, eventually settled in the GTA and became a Canadian citizen. In 1999, I started working as a computer science and math teacher—and, later, a vice-principal, in schools across Toronto, including George Harvey, York Memorial, Silverthorn, John Polanyi Collegiate Institute and Emery Collegiate Institute.

“In late 2020, I got an offer to become principal of Novopecherska School in Kyiv, Ukraine’s capital. At that point, I’d never thought about returning to Ukraine. I had only visited my native country once in the past 27 years, but the job seemed like a great opportunity. Novopecherska was one of the best schools in the country. I decided to take the position. I wanted to contribute to improving education in Ukraine.

“My partner and I moved to Kyiv in January 2021. The initial plan was to keep our house in Mississauga and return once my two-and-a-half-year contract was up. My new school was wonderful. It had the most devoted teachers and students I’d ever worked with, and there was an incredible atmosphere of learning and freedom of expression.

“That atmosphere was a remarkable transformation compared to my childhood memories. When I left Ukraine, it had just become independent, and it was still stuck in a fearful Communist mindset. When I returned, people were not afraid to voice their opinions and be themselves. The biggest difference was in the children. They were free-spirited and knew so much more about the world than previous generations.

“That year was the best period of my life, both professionally and personally. Despite Covid, I travelled a lot and managed to visit many places. Ukraine is a beautiful country filled with hard-working, passionate people, so I wondered why its economy wasn’t booming—the opportunities seemed limitless. I realized that Russia’s constant interference and aggression were hanging over Ukraine like a cloud. The possibility of a full-scale war with Russia was clearly holding the country back. Despite all the uncertainty, I felt very safe in Kyiv. I even considered buying an apartment there and making a permanent move.

“In the months leading up to the Russian invasion in February, I heard troubling news of escalating tensions in the region. The Canadian government sent several letters warning Canadian citizens in Ukraine about the growing threat of war, advising people like me to get out of the country. But Ukrainians thought it was just talk, that nothing would actually happen.

“By February 20, the news was becoming even more ominous. I had a gut feeling that something wasn’t right. My mother in Ancaster, Ontario, was even more worried than I was. She called every day, begging me to come back to Canada. But I didn’t want to believe that the Russians would actually invade.

“In the early morning hours of February 24, I heard explosions in the distance. I realized that Kyiv was being attacked by the Russian military. My partner and I decided to leave the country right away. We tried to go to the nearest airports, but they were all closed. A childhood friend offered to give us a ride to the city of Boryslav in my home region of Lviv Oblast—a 600 kilometre drive that took 18 hours. A relative then took us to the Polish border.

“About 23 kilometres from the border, we hit a log jam. There were more cars than I could count, all filled with people trying to leave Ukraine and escape the war just like us. Some of the people around us said they’d been waiting in traffic for more than 30 hours. So we left my relative’s car and decided to walk. It took four hours to reach the border, where we found a crowd of people, packed together like sardines, waiting to be processed through the first customs checkpoint.

“My partner and I waited 20 hours in that crowd. We were outdoors and exposed to the elements. At first, the weather was fine, but it got colder as time passed, and then it started raining. There was no room to sleep, and you risked losing your spot if you left to go to the bathroom, so we all stayed put. I didn’t see anyone eating anything. I hadn’t eaten for almost an entire day, but the situation was so intense that I didn’t even realize I was hungry.

“Most of the Ukrainians at the border were mothers with young children. Men of fighting age weren’t allowed to leave the country because they might be needed for military service. Many of the men would bring their families and wait with them at that first checkpoint, and then say goodbye as their wives and children passed the gate. It was heartbreaking to watch families cry as they were split apart. A lot of the mothers had to leave behind strollers and many of their possessions because the area was so packed that it was impossible to get through with them. So they just carried their kids in their arms for hours on end.

“I still remember one family that was waiting in front of us. The mother’s name was Halyna, and she was alone with her three children. The eldest was a 10-year-old boy. He was so angry because he didn’t want to be there. He screamed at his mother, ‘I want to go home. Why did you bring me here? I want to go see my dad. Let’s go back.’ He yelled those words for hours. Of course, he couldn’t possibly understand what was happening.

“Thankfully, once we finally reached the border, we had no issues crossing. There were Ukrainian volunteers waiting for us on the other side with coffee, soup, blankets and diapers. I’ll always be grateful for those volunteers and what they did for us.

“In Poland, a woman named Katya—a psychiatrist we befriended as she was helping mothers and children at the border—offered my partner and I a ride to Warsaw. On the way, we booked a flight to Toronto. On February 27, three days after we left Kyiv, we arrived at Pearson. My partner and I are lucky that we have our home in Mississauga. Many Ukrainian arrivals aren’t so lucky.

“I’m still in shock that the invasion is actually happening. It’s so hard to believe. There is no justification for this war. But what frustrates me the most is that I have a lot of Russian friends who are completely misinformed by the Russian media about the war. No matter what I say to them, they repeat the propaganda lies about the invasion being a rescue operation to save Russian-speaking Ukrainians from Nazi oppressors. At the same time, I feel sorry for a lot of the Russian people, because some of them understand the reality of what’s actually happening. But they’re too terrified of the Putin regime to do anything.

“Since my return, I’ve kept busy by organizing online learning for my students back in Ukraine. I’m so worried about them and my faculty. I still haven’t heard from many of them since the invasion started. The majority of the teachers who have contacted me don’t have stable living conditions, so I’m reaching out to Ukrainian-Canadian teachers, asking them to volunteer and help with our virtual lessons. It breaks my heart to see all the promise in my school fall apart like this, but we will do what we can to keep educating our students.

“Ukraine will never be the same. And even after the war ends—and I pray that it ends very soon—I know that, if I return to Ukraine, it will be unbearable for my family in Canada. The two days I spent trying to escape were agony for them. They sat and waited helplessly, not knowing if I was alive. I don’t think I could ever put my family through that uncertainty again. If I were to return, they’d always have that fear in the backs of their minds.

“Still, I carry a lot of hope within me. I’m optimistic that the Canadian government will make the immigration process for Ukrainian refugees as easy as possible in the coming weeks and months, because they are in desperate need of help and safety. I also hope that humanity as a whole will learn some lessons from this war. We cannot have dictators like Putin manipulating and bullying the world like this. We need to put in place measures that prevent this kind of conflict from happening ever again.”