George Irwin has spent the last four decades making toys for kids. Last year, after contracting Covid, he realized he could use his manufacturing experience for the greater good. So far, he’s sold more than 10 million masks, and is pumping out 100,000 more per week from his Collingwood and Edmonton factories. Here’s how he made the pivot.

“My grandfather started Irwin Toy 94 years ago—it’s a family company, through and through. It was once the largest toy company in Canada, and it still has a significant global footprint. My children have all worked for the company, and I hope to pass it on to them one day. We’ve made so many toys over the years, but one of my favourites is the Yoda action figure we sold in the ’70s. I think it’s safe to say every kid who was into Star Wars wanted a Yoda. My friend’s young son used to carry it in his pocket because he felt that it gave him strength, sort of like a good luck charm. That meant so much to me. Putting smiles on kids’ faces is one of the best parts of this business. And at 70, I’m still having a ball. But over the past year, I’ve turned my attention to something new: manufacturing and selling millions of masks to protect front-line workers combatting Covid-19.

“My first brush with Covid was in early January 2020. My wife, Brenda, and I were set to attend the Hong Kong Toy Fair. We were somewhat aware of the coronavirus, since Doug and Lisa, my son and stepdaughter, live in Hong Kong and had heard rumblings about it. Of course, no one really understood it then: all we knew was that there was a new bug making people sick. It didn’t give us much pause about travelling, since we didn’t know anything about it. Things ramped up quickly while we were in Hong Kong. By the time we got home, the Hong Kong–China border was about to close. Everyone was panicking.

“The following month, Brenda was set to attend another toy fair in Australia. On the last leg of her flight home, from Vancouver to Toronto, she sat beside a man who was clearly sick, coughing and sneezing a lot. She was nervous and tried to lean away from him, but she also wanted to be respectful. There’s only so much distancing you can do in an airline seat. When she got home on March 3, knowing what little she did about the coronavirus, she self-isolated on the second floor of our house, even though she was feeling okay. She’d brought a bunch of presents home for our relatives, and I kept jokingly asking her, ‘What did you bring me?’ Well, it turns out she brought Covid.

“Within a few days, she’d started to feel awfully tired, and soon she was in a great deal of distress. She was exhausted, her body ached, she was gasping for air. She was having so much trouble breathing that she had to sleep sitting up. One night, when her breathing became laboured, we almost went to the ER. Thankfully, the next morning, she started to feel marginally better, and then much better the day after that.

“She isolated from me throughout her illness, but nevertheless, two days later I started to have symptoms. My breathing was okay, but I felt like I’d been run over by a truck—again and again and again. I literally couldn’t get out of bed except to drag myself to and from the washroom. We were both bedridden and unable to function for the better part of three weeks before we started to feel better in late March. Fortunately, I had stocked up on groceries just before Brenda got home from Melbourne. When she was sick, I did most of the cooking—mostly simple stuff, like toast and soup—but when we both got sick, we barely ate. Our appetites had more or less vanished.

“I’m now about 95 per cent recovered from Covid, with some lingering effects on my athletic stamina. I run and play tennis, and my lung capacity isn’t quite what it was before I had the disease. Brenda, meanwhile, has lingering issues with her vision that she’s sure are a result of Covid. She could see like an eagle before she had it.

“When we were just getting over our illness and the world started to shut down around us, I was struck by the feeling that we had to do something. The way I see it, we got the disease, we got it early, and we were fortunate enough to stay out of the hospital. I see our experience almost like karma, a message, or a call to action. Because of what we went through, we knew we had to help other people afflicted with Covid.

“Around that time, Brenda and I got an email from our friend Alan, who lives in Hong Kong and owns a toy company. He told us he’d converted a toy factory into a mask factory: they were producing hundreds of thousands of three-ply, disposable masks, and he wanted us to help sell them in Canada. Considering what we’d just been through, Brenda and I jumped at the opportunity. We decided that I would do the selling—calling hospital officials and inquiring about their PPE needs—and Brenda would figure out Health Canada approvals.

“These masks were certified up to a European approval standard, so we were able to get immediate Health Canada approval. We started selling in Collingwood because that’s our home, and it seemed natural to begin by making a difference in our community. I called the head of the Collingwood Hospital—a long-time acquaintance—and said that I had some masks available from China. She ended up buying 40,000 that very day. She also gave me the names of other people who ran nearby hospitals in Barrie, Alliston, Muskoka. The first day, we’d sold 440,000 masks. By the end of that first week, the week everything shut down, we’d sold a million. We were exhausted and exhilarated. Here were two people who’d just recovered from Covid, and we were able to provide a million masks to the province of Ontario.  I love the smile on kids’ faces when they get one of our toys, but this was a totally new kind of emotional fulfillment. We were potentially saving lives.

“We quickly realized we should create a new company for our mask sales, and settled on the name Trebor Rx Corp. Trebor is Robert spelled backwards: Brenda lost a son named Robert a decade ago, and the name is a tribute to him. He had an incredible heart, and saw the best in everybody.

“Over several months, we ended up selling well over 10 million masks, both in Canada as well as to hospitals in the United States, Europe, and the Caribbean. We were selling them at 30 to 50 cents a pop, well below competitor’s prices, which were between $1 and $2 each.

“By June, importing PPE from overseas had become complicated. We were lucky to have boots on the ground in Asia, so we never had issues with product quality, but in April and May, air freight prices per kilo had tripled—the airlines had jacked their fees, taking advantage of the fact that that governments were low on PPE and importing from abroad. Importing masks became extremely expensive, and we wanted to keep selling them at fair prices. On top of that, the premier had announced a call to action for firms to manufacture PPE in Ontario.

“It just so happens that Brenda’s nephew, who lives in South Africa, was in the process of developing a reusable respirator mask called the Pro+. So we started working with him to bring it up to market quality. We also made sure the dynamics of the filtering system worked properly, and that the filters passed Canadian standards. One of the biggest changes we made from the original design was the opacity of the plastic: we wanted a clearer mask than the one Brenda’s nephew had originally designed, and that took a while to develop. We felt that patients would have a better experience if they could see health care workers’ facial expressions. Eventually, my stepson Bryan, VP of Trebor Rx Corp., made an agreement to start manufacturing the mask in Canada. 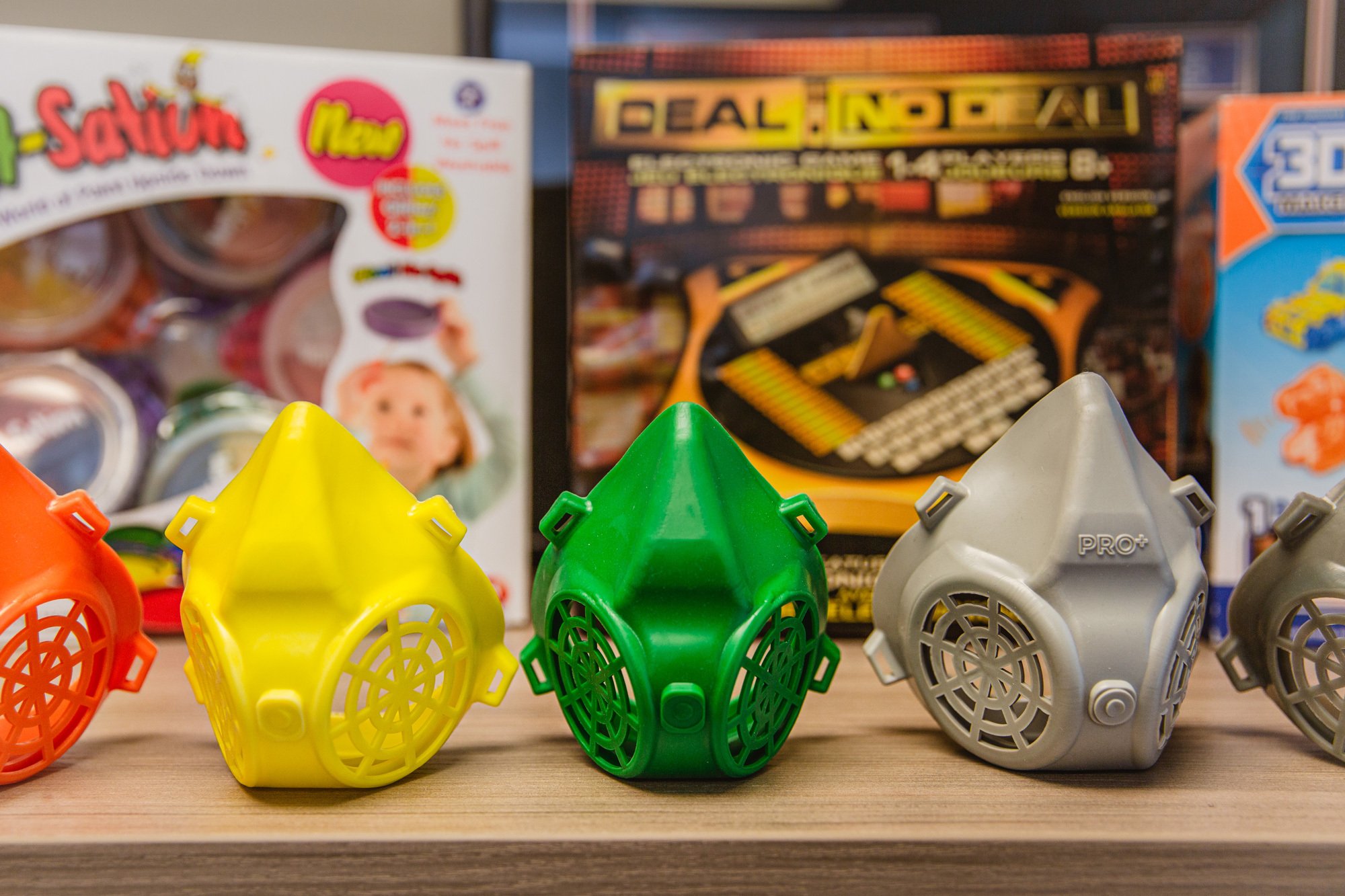 “The Pro+ mask is made of a material called thermoplastic elastomer, which can be easily sanitized with antibacterial wipe, UV light or soap and water. It’s comfortable, breathable, forms a complete seal, and offers a certified 98 per cent protection against viruses, bacteria, and particulates. It offers N95 level-protection, but unlike an N95, it’s reusable and recyclable, with a use time of around 300 hours. We’re waiting for Health Canada to approve its use in health care facilities, but we expect to receive it any day now. Right now, they’re being used in a variety of non-medical facilities, like construction, mining and food processing.

“Thanks to our background in the toy industry, we were in a good position to set up shop for mask-making in Ontario. In October, we contracted a moulding factory in Woodbridge to produce the parts for the respirator body. Then the parts are sent to our factory in Collingwood and assembled there. We’re making 40,000 Pro+ masks a week. We also have a brand-new factory in Edmonton, where we’re making around 60,000 disposable three-ply masks a week. 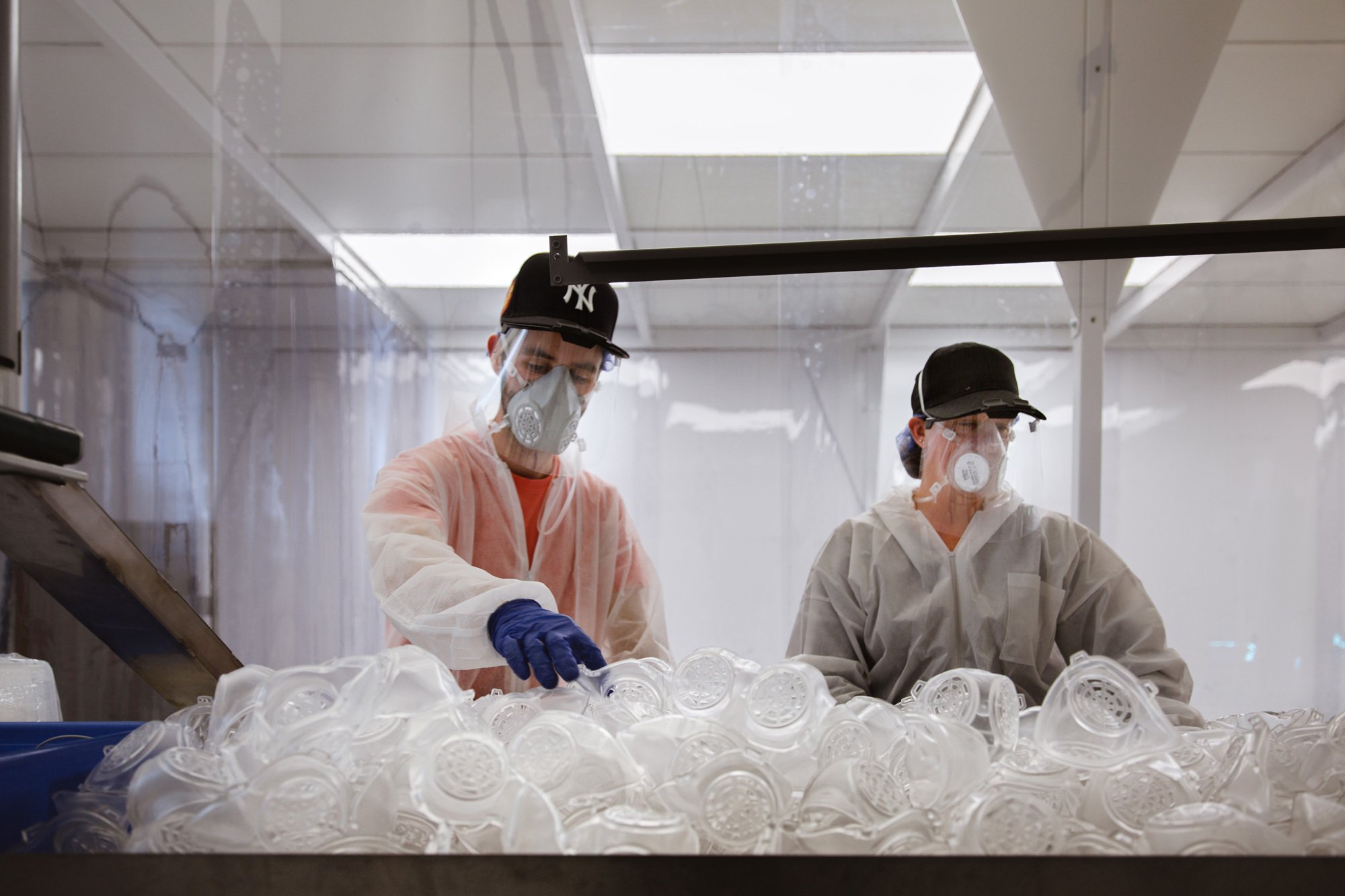 “These are temporary facilities: we’re in the process of outfitting a 28,000-square-foot factory in Collingwood, which should be ready by the end of February. That’s where we plan to do the bulk of our production once we get Health Canada approval.

“I feel so good about making a product that protects people from getting this hideous disease. My entire life has been in the toy business, and it feels good to sell fun products to kids. Who doesn’t want to make a kid happy? But this is different. We’re making a huge impact at a time when it means so much. I can say unequivocally that this is one of the most rewarding things I’ve done in my entire life.”