“We talked on our phones through the glass”: This Toronto man came up with a creative solution to visit his wife in the hospital

“We talked on our phones through the glass”: This Toronto man came up with a creative solution to visit his wife in the hospital 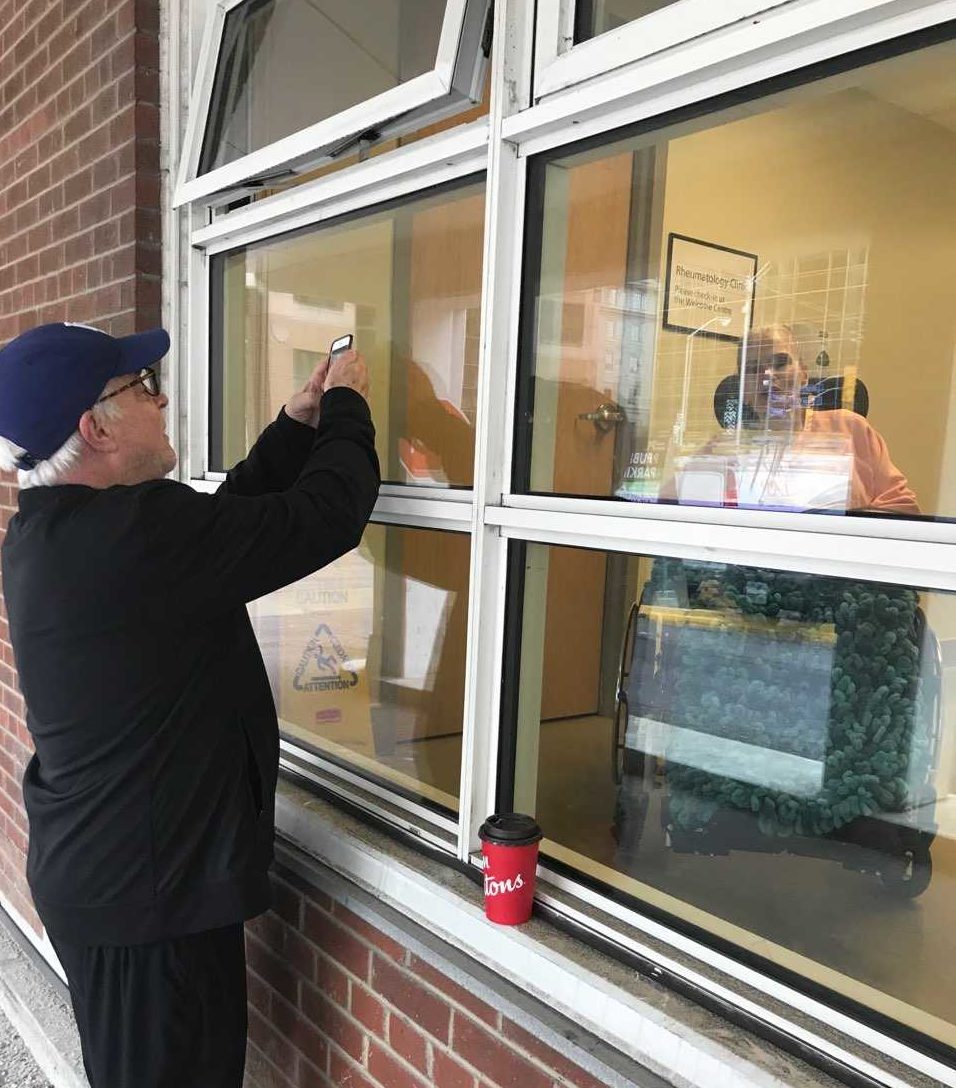 I first met Lynn in Hebrew school in 1963, when I was nine and she was 10. Our families belonged to the same synagogue, Beth Am on Keele Street. She was so shy; she always came in late to class and sat at the back so she didn’t have to talk to anybody. I was the opposite, always sitting in the front and brimming with enthusiasm. During one of the High Holiday services, my mother asked me if I saw any girls I liked. Lynn was there with her family, and I pointed her out. I’d had a crush on her for years. When I was 21, I finally called her up and we went out on a date. I took her to see Marathon Man, with Dustin Hoffman, and then we went to a Hungarian restaurant on Bloor Street. Now, we’ve been married for 40 years. I’ve been an accountant my whole working life, and Lynn worked in the customer service department of an office furniture manufacturer. We raised our son and daughter in Thornhill. There was nothing we didn’t do together: she’s my best friend. When we first got married, I played baseball and hockey, and she’d come to all my games to cheer. Later on, we’d go on power walks through our neighbourhood. Even after decades, we could still make each other laugh.

One evening about 20 years ago, on one of our walks, Lynn said she thought she was walking strangely, that her gait wasn’t as steady as usual. I couldn’t see it, but she insisted something was wrong. She began to have headaches, the kind that made her feel like she was always wearing a hat that was too tight for her. We went to a neurologist. It took a little while, but eventually, through an MRI, they determined what was wrong: Lynn was diagnosed with progressive multiple sclerosis. She was 45.

For 18 years, I was her primary caregiver. At first, I’d only have to administer medication to her once a week. But as the years went on and she became more frail, things got worse. She once said living with MS was like living with a disease that tears away a piece of you every single day. Eventually, she required the use of a wheelchair, and was frequently in and out of hospital with bouts of pneumonia, which is prevalent in people with her condition. In September 2018, she had a series of seizures and strokes. We took her to the hospital, and she’s never been well enough to come home. After the strokes, she lost some of her short-term memory. But otherwise, she can do everything. She can talk, she can laugh, she can cry.

I go to Toronto Grace Health Centre to see her every day. I don’t have a car, so I take the bus from my Markham office down to Church and Bloor. It takes about an hour and a half to get there, and we eat dinner together every night. I arrive at around 4:30 or 5, and sit there with her in her room. I bring food to her every evening; her favourite is a Greek platter of salmon, pita and taramosalata that we found on Uber Eats. Some nights, I’ll ask her what she wants me to bring her the next day and she shoots me a particular look—the Greek look. I don’t need to ask. I always know what she means. I usually leave around 8:30 to go home and start the ritual again the next day.

In February, as coronavirus progressed, I grew increasingly worried about Lynn, whose immune system is compromised from her disease. I put my faith in the hospital, holding on to the knowledge that there were no cases where she was, or at least not yet. Then, five weeks ago, Toronto Grace stopped allowing visitors. It was devastating. I miss Lynn deeply. Now, instead of visiting in person, we talk on the phone. In the evenings, I take walks, or watch movies, or read the news to pass the time instead. It’s not the same. And I know she’s struggling; she tells me how sad she is that she can’t see me and our grown kids, and I try to lift her spirits, to keep her hopeful. The group activities she used to do—sitting yoga, sessions with counsellors or colouring in colouring books — have all stopped because of the virus, and she’s alone so much of the time. It was my daughter Jordanna’s idea to see if we could go down and see her through the window. She called and arranged it with the hospital staff.

The nurses told her Jordanna was coming, but kept my visit a surprise. When I saw Lynn sitting in her wheelchair, she looked so regal. She reminded me of Princess Grace of Monaco. Her hair is long, and the nurses put it in braids, and she was wearing a little bit of makeup. She looked perfect. When I saw her, I cried. It was more emotional than I was expecting, for both of us. We spoke on our cellphones through the window. We talked about our grandson, who’s two years old, and our children. We talked a little bit about her mother and father, and reminisced about meals we’ve shared. We laughed together, talking about the minutiae of life, the same way we always have. Our visit through the glass lasted an hour, but it flew by. At the end, I took a picture of her sitting there, because I don’t know if or when I’ll be able to go back. She’s so beautiful. In our 40 years together, this is the longest we’ve ever been apart.

—As told to Katherine Laidlaw