“We snuck into a school and used the showers”: How a graphic designer and a copywriter survive in a van

“We snuck into a school and used the showers”: How a graphic designer and a copywriter survive in a van

Who they are: Heather Nassler, 34, and Curtis Diehl, 38
What they do: Heather is a graphic designer and recently started an event company called Van Life Ontario, which organizes meet-ups for people living in vans; Curtis is an ad copywriter
The van: 2006 Dodge Sprinter, which they bought second-hand for $11,000
Monthly expenses: $540 for gas, $400 for repairs, $95 a month for insurance, $130 for phones and $10 for Internet—they sometimes use the Wi-Fi at Tim Hortons or McDonald’s
Monthly income: Approximately $500 combined for graphic design and ad work; they also have savings from past jobs in the catering industry

After we got married in 2012, we went to Italy for our honeymoon. That’s when we caught the travel bug. The following year, we went on a four-month backpacking trip to Europe, and a few months after that, we planned another trip, this time to the Balkans. We always wanted to move around, and we love learning about new places. Then we got our cat, Raine, and you can’t always travel commercially with a cat. We also didn’t want to have to find a new place to rent every time we went travelling. So we started thinking about van life sometime in 2017, after seeing it on YouTube. At the time, I was working as a barista at Craft Kitchen, and Curtis was a delivery driver for a company that provided lunches for daycares and middle schools. We both worked for catering companies on the side, too. We had saved up roughly $11,000. 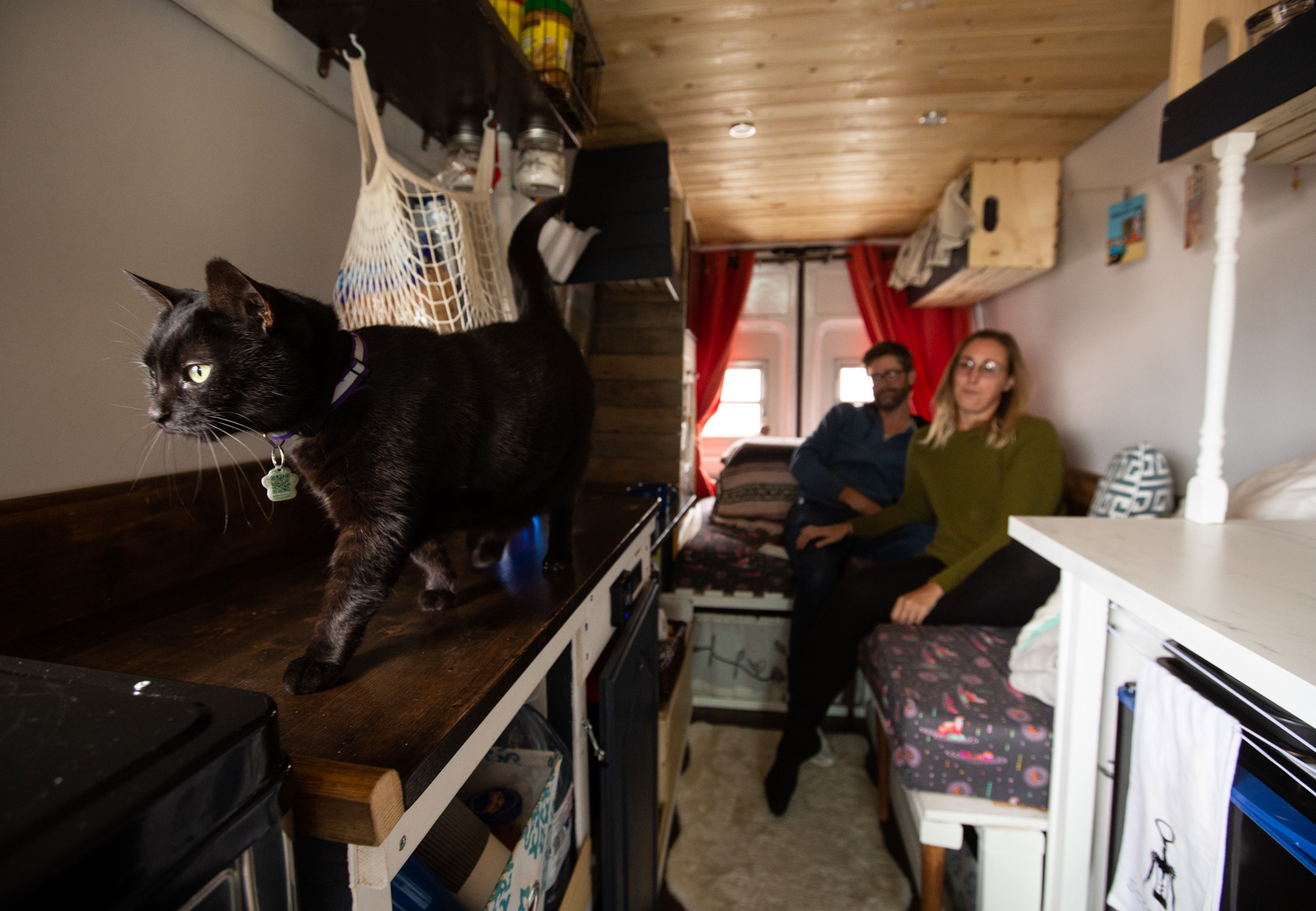 Our families were really supportive of the plan. We both have entertainment backgrounds—I trained as a Shakespearean actor in London, England, and Curtis went to Humber College to be a comedian—so our parents are used to our unconventional ideas. My mom offered to buy the van for us in mid-2018 as part of my inheritance, and we got a used 2006 Dodge Sprinter. That’s when we quit our jobs in Toronto. We drove the van out to the farm that my mom and sister own in Orillia. It took six months to build it: we had to get new brake lines and a transmission; repair the roof; and install insulation, electrical, a toilet and a sink. We still spend a lot of time parked on the family farm, because we can use the Wi-Fi there to build our business. 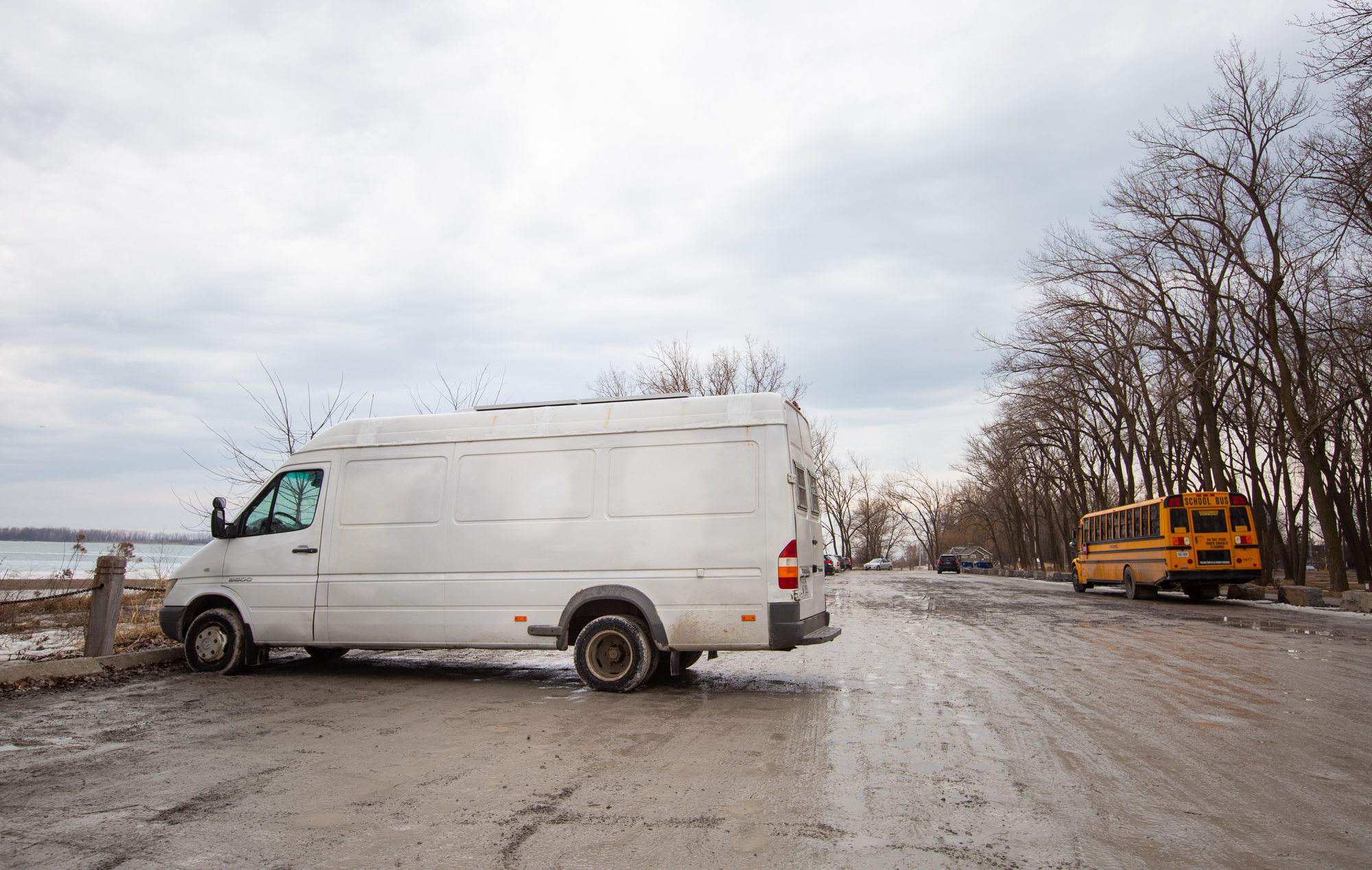 We’ve been living in our van since December 2018, and we’ve developed a routine. We have a cassette toilet, which has a holding tank and a separate seat and bowl. The downside is that we have to dump the waste into a septic tank or a porta-potty. That’s one of the drawbacks of van life—especially in winter, when there are fewer and fewer usable porta-potties—because the contents of the septic tank freeze when the temperature dips below zero, and then they can’t be cleaned. A few times, we’ve had to drive around for hours to find a porta-potty. Recently, we saw one at a rich person’s house that was being built near Vaughan, and we emptied our septic tank into it. That was the worst thing we’ve ever done.

It can also be tricky when we need to shower. Unless we’re using the bathroom at a friend’s place, we rely on showers in gyms. We have Planet Fitness memberships, so that’s where we go when we’re in Ontario. One time, in 2019, we were traveling to Cape Breton and we didn’t realize that there weren’t any Planet Fitness gyms east of Quebec. We wanted to shower that day because we were about to go to a big van life meet-up. We drove around looking for a YMCA, but we didn’t find one. Eventually, we had to sneak into a polytechnic school and use the showers during a basketball practice. 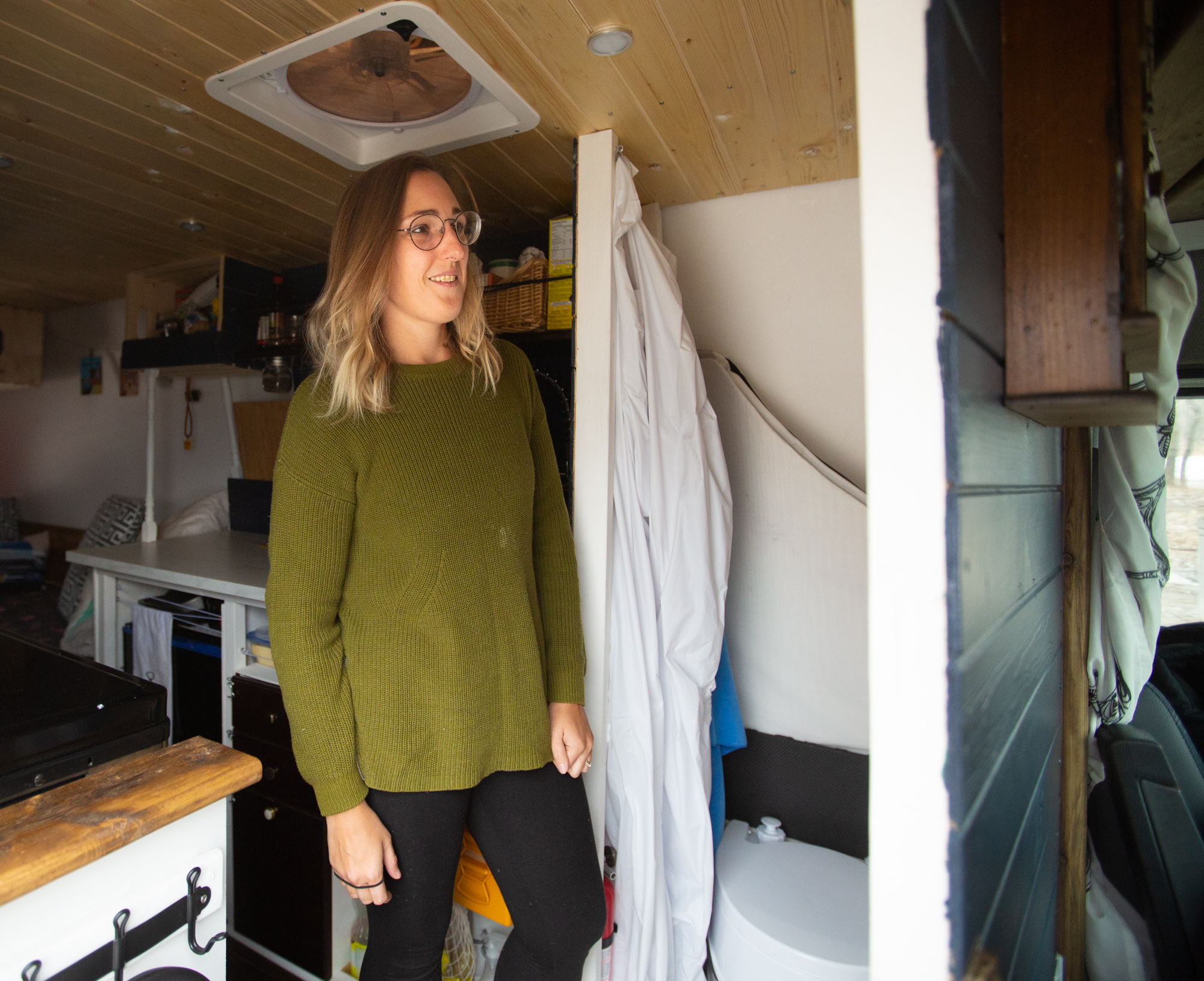 We usually park at trailheads, boat launches, on Crown land or in Walmart parking lots. In winter, it’s harder to find parking spots because a lot of things that would normally be open in the summer are shut down. And we have to be careful not to get stuck in the snow. CAA has towed us out of a couple of snowdrifts.

Recently, our heater broke and it was difficult to find the part we needed to fix it. Luckily, we were at my mom’s when that happened and we ran an extension cord through the window to a space heater, because we don’t have an alternative heat source. The day after it broke, it was –25°C outside. If we weren’t at my mom’s place, I don’t know what we would have done. Our van isn’t meant for cold temperatures, anyway. We spend our winters in warmer places. This year, we’re going to Mexico.

We’ve experienced some pretty amazing things around the country because of van life. On our trip to Cape Breton, we foraged for mussels, which we enjoyed with some white wine. On that same trip, we followed a dirt road and found the world’s best parking spot, about six metres from a cliff looking out onto the Gulf of St. Lawrence. It was beautiful—the red cliffs, the sea and the sound of the waves crashing. Not many people get to see that.