“To our parents, it’s like we’re sleeping on the streets”: How two first-generation Iranian-Canadians are getting used to van life

“To our parents, it’s like we’re sleeping on the streets”: How two first-generation Iranian-Canadians are getting used to van life 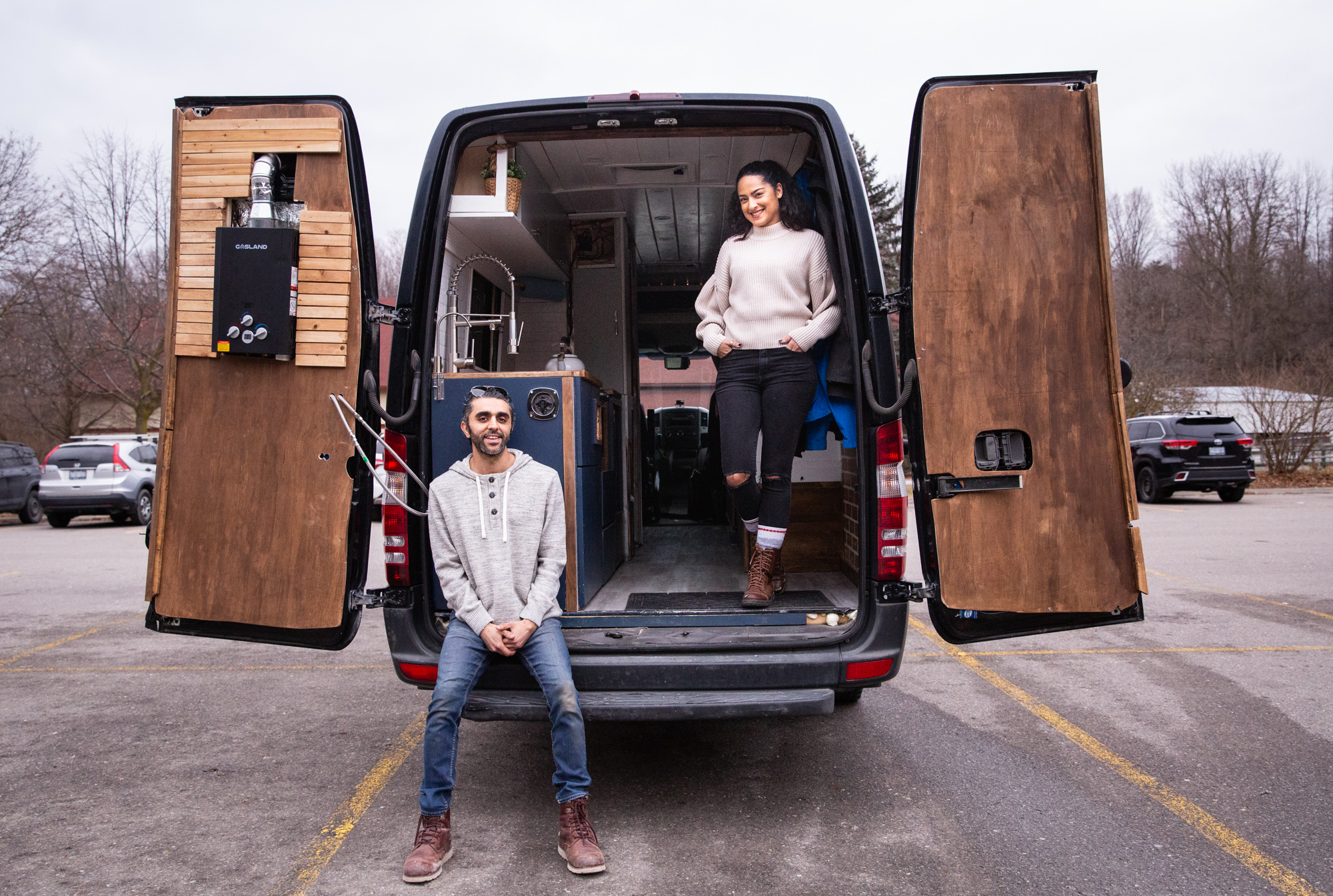 We were both born in Iran, and our parents moved our families to Nova Scotia in 2007. We met in Halifax the following year, and by 2017 we were living together and paying $1,600 for a studio apartment at Yonge and Davisville. This whole thing all started when Soheil read an article in the New Yorker on van life in September 2017, about digital nomads who were working and travelling. That was his ultimate dream—to do both. He got excited about it and tried to convince me to live in a van with him. At first I was freaked out: the first thing that came to my mind was, How am I going to fit all my clothes in the van? I worked in retail for a long time and I studied fashion, so I had a huge wardrobe. Then we watched YouTube videos about modern van life, and it started to seem more appealing. Our apartment was only 500 square feet, so it’s not like we had much space to begin with.

We bought our van used in January 2018 for $21,000. It was right before our wedding, and we were preoccupied with the planning, so we had to defer the build. To make the van livable, we added a diesel heater, a window, two fans, solar panels, electrical wiring, batteries, a water tank for a shower, a water heater, fridge, oven, propane stove, cabinetry, a storage unit and a mattress. We put all our savings into the build but still incurred $6,000 in debt. Since we have consistent income coming in, we weren’t too strict about the budget. And by living in the van, we save around $2,000 to $2,500 on rent and household expenses each month. 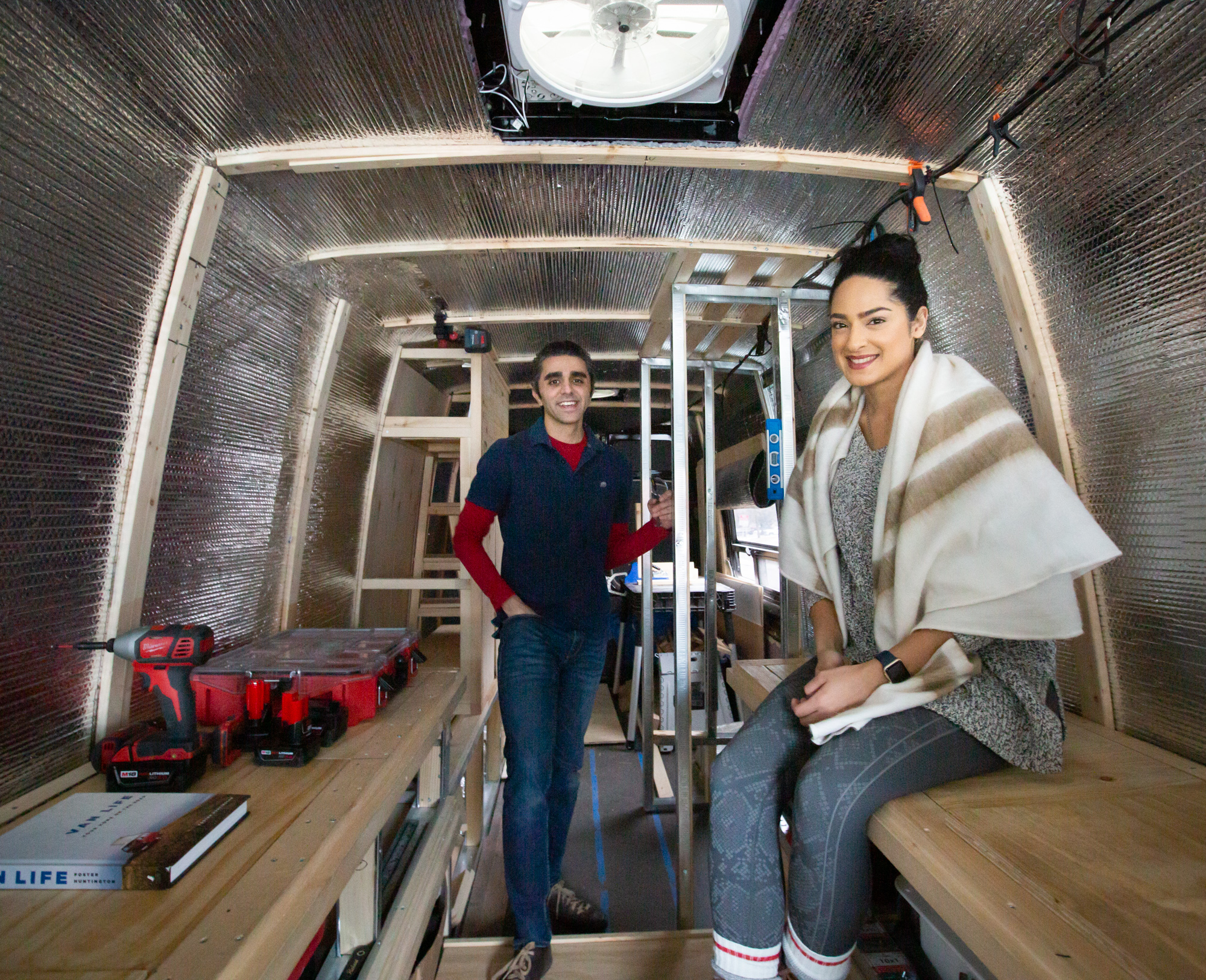 When we moved in, we still didn’t have a complete kitchen. We only had one battery, and our camping oven wasn’t hooked on to the propane. The plumbing was still a ways from being done: we had no hot water. More than a year later, we’re still building our shower. We have a GoodLife gym membership which we use for showers, and there are a couple of 24-hour locations around the city that fit our lifestyle. We’re planning to get a composting toilet at some point in the future, but right now, since we are still in Toronto, we use facilities at GoodLife, Home Depot, coffee shops and mall washrooms. We rent a storage locker for our extra stuff from the apartment, and there’s a toilet there too. 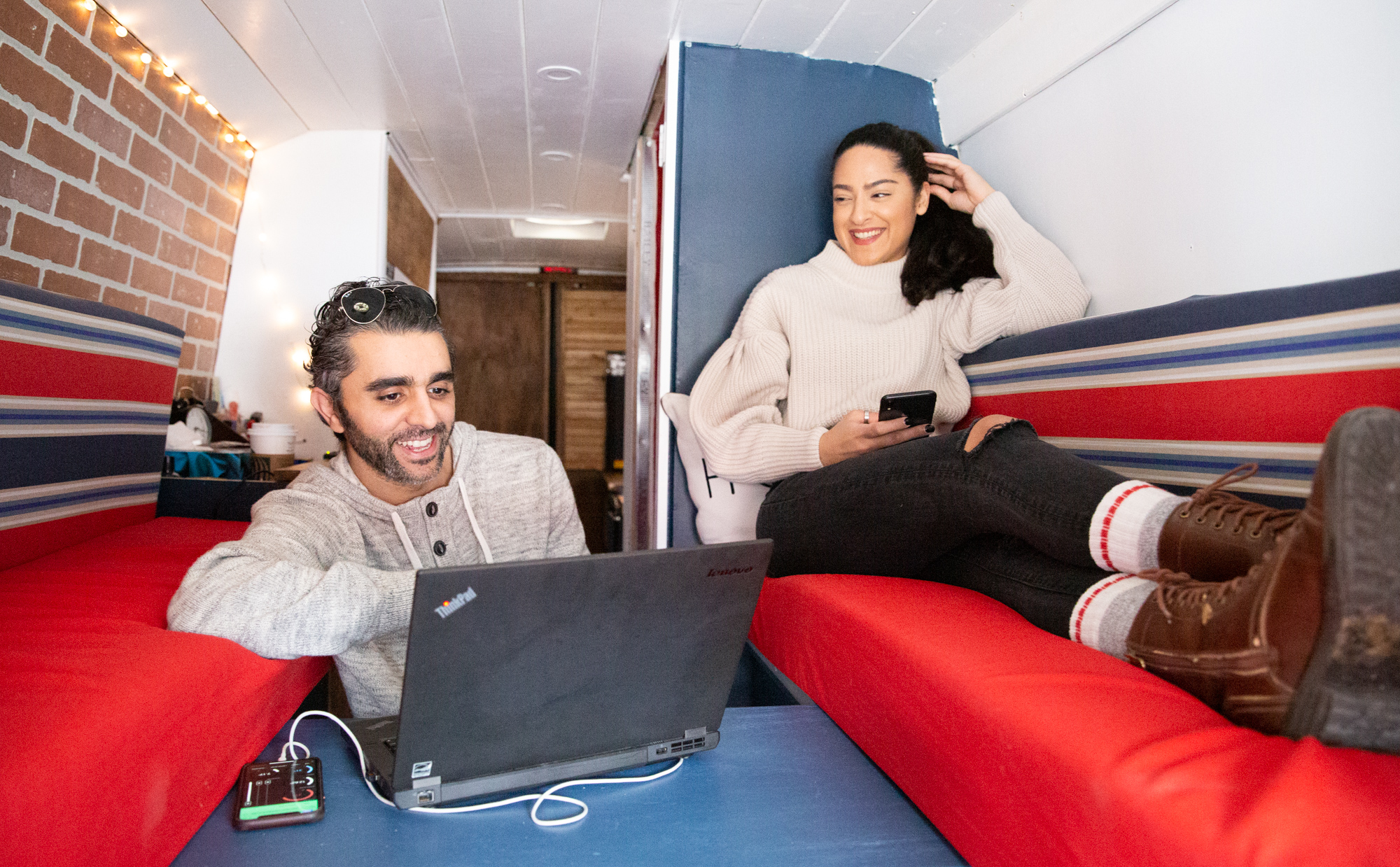 We usually park in midtown at Eglinton and Laird or in Davisville; sometimes we park at a Walmart near my work. Soheil works remotely, so the van is his home office. Overnight, we park in North York between a park and forest. Our van is big, black and unmarked, and it can look intimidating, so we’re conscious of not parking in front of people’s houses. One night in October, we had a knock on our door—someone was suspicious of the van and called the cops. We ended up giving the officer a van tour. We might paint the trims to make it look friendlier.

There have been vanlifers in areas like Squamish who throw their waste into the woods, which understandably infuriates locals. We’re conscious of that and try to live with no impact on our surroundings. We try to not leave any trash when we visit an area, and we never bring garbage to private property. When we empty grey water, we do it at our storage facility, and when we turn on our heater, we are careful that there aren’t people nearby because of the diesel exhaust. 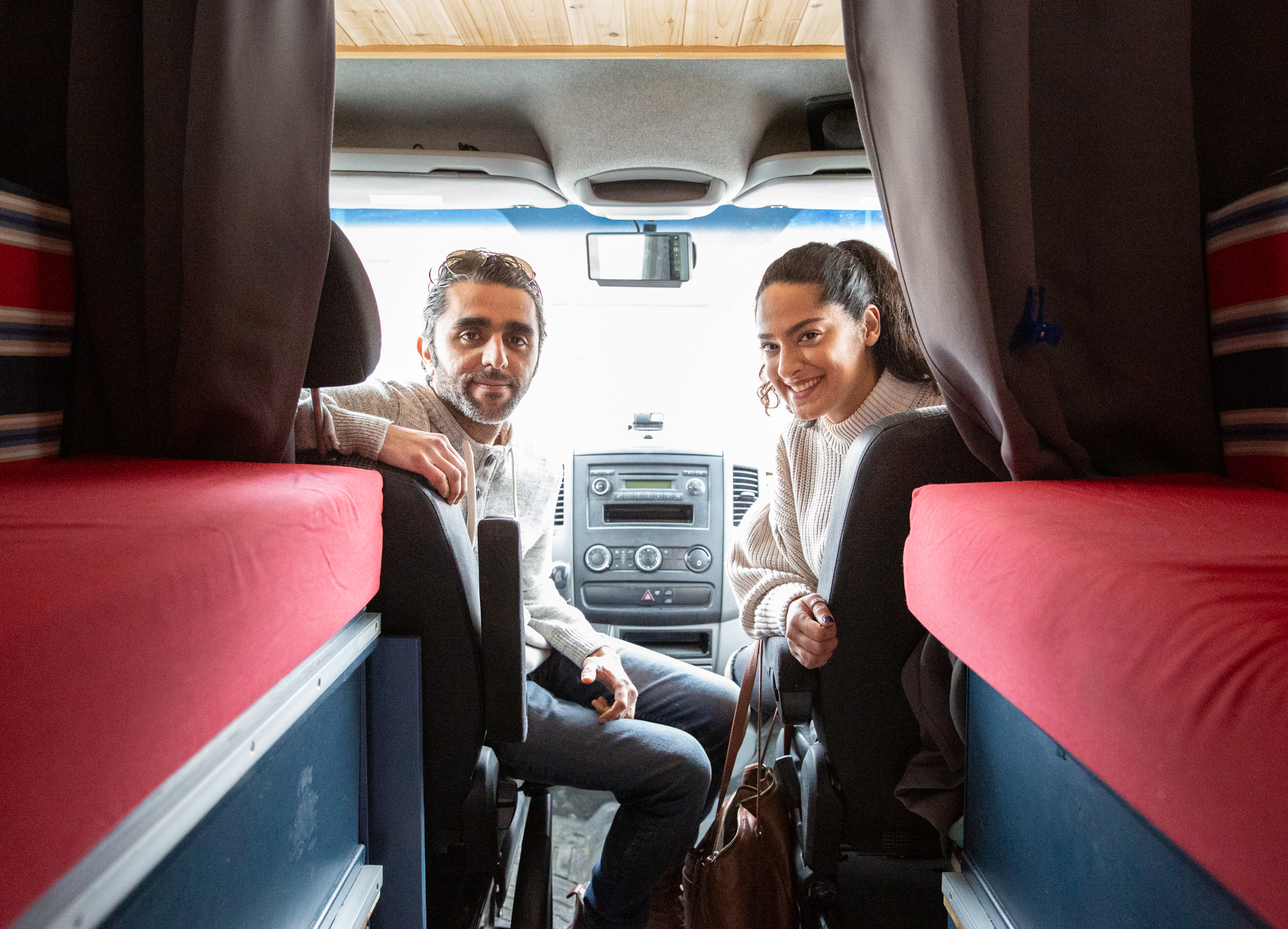 Our parents have mixed reactions about us living in a van. My dad lived in the U.S. in his 20s, and he was a hippie. He’s supportive of our lifestyle, but he does want us to settle down and have kids one day. Soheil’s parents know that he’s unconventional, and they hoped that I would be the person who settles him down. On the night of our wedding, when we told them we were going to move into a van, his mom said, “Oh my gosh, he found someone just as crazy as him.” To our parents, it’s like we’re literally sleeping on the streets. 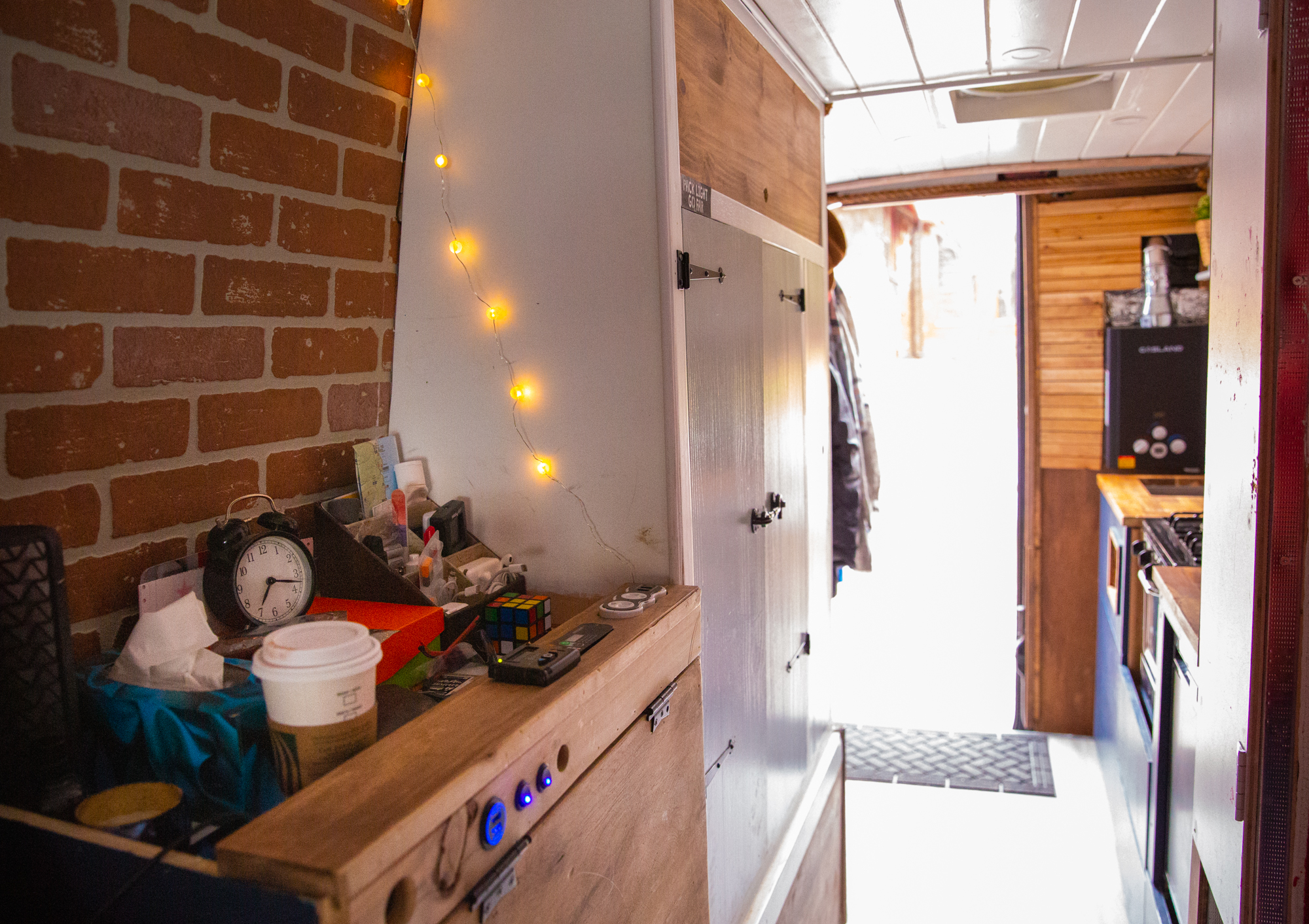 We don’t have a timeline. When we’re tired of the van, we’ll move out. Our plan is to move to Vancouver in mid-February, since we’ve never lived on the west coast. Soheil will keep his remote job and I will transfer to a location there. We’re tired of two-week vacations.