Who Aman Rajwani, 32
Where he lives In a 750-square-foot condo at Eglinton and Mount Pleasant
What he does Former president of Ontario Public Service Employees Union Local 596, at Ryerson University; his contract ended in early February
What he makes $81,000 a year in base salary

At the age of six, Rajwani’s family immigrated to Canada from the United Arab Emirates. Years later, he received a bachelor of commerce from Ryerson and a master’s in industrial relations and human resources from U of T.

Starting in 2013, Rajwani worked for seven years as a projects coordinator at Ryerson’s Centre for Labour Management Relations, making roughly $55,000 a year, until he ran for union president. During his time as union president, he represented the interests of union members at Ryerson University.

Aman lives in a condo at Eglinton and Mount Pleasant. He doesn’t have any roommates or pets, but his robot vacuum, which he calls “&,” keeps him company. “I can’t have one of those Ikea monkeys, so I got &,” says Rajwani.

When he’s not working, Rajwani has socially distant balcony drinks with his neighbour, Mary. He also likes to hang out in his “divination zone” (really just his living room), where he keeps a tarot deck atop his Gus* Modern vegan apple-skin leather ottoman. “The divination zone is a spot for meditating, praying and listening to Ellie Goulding,” says Rajwani.

Other housing costs $750 a month, for insurance, maintenance and property taxes.

Phone $90 a month, with Bell. “I’m currently in the process of switching phone plans. I’ve been quoted between $25 to $90 a month for an annual plan, so we’ll see what I end up choosing.”

Internet $45 a month, for an unlimited plan, with Fido. “I recently switched from Bell to Fido. This new plan will save me about $30 a month.” 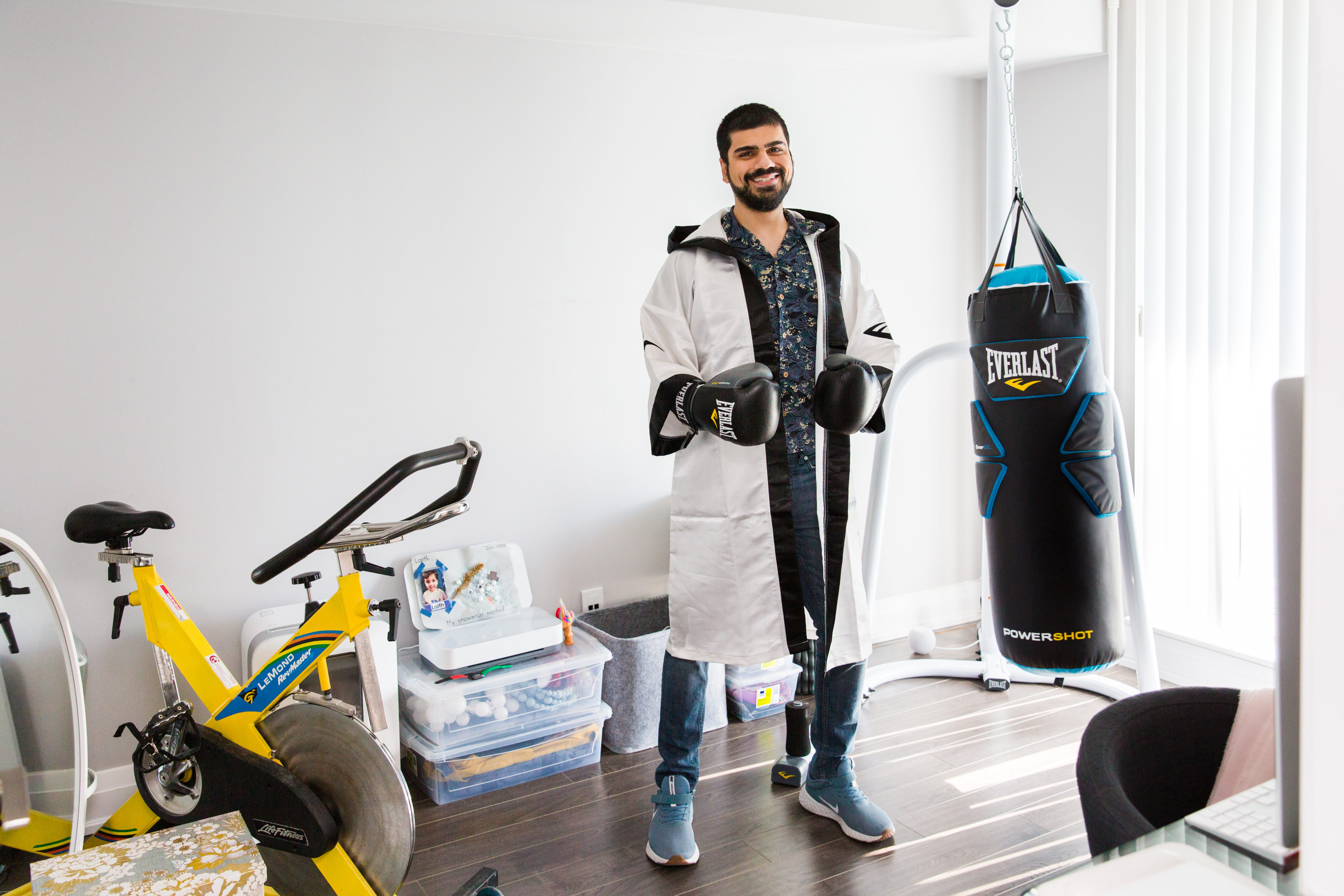 Groceries $250 a month, from Loblaws at Yonge and Eglinton. “I pretty much subsist on lentils, nuts and seeds. That’s how I try to keep healthy.”

Takeout $300, from Pizza Hut, Fresh and Baskin Robbins. “From Pizza Hut, I’ll order a 14-inch triple-cheese pizza. I get the largest size so that I always have leftovers. I also like the Polar Pizza from Baskin Robbins, which usually lasts a couple of weeks. And I really enjoy the onion rings from Fresh.”

Transportation $0. “I just walk everywhere. I live near Yonge and Eglinton, which has everything I need.”

Subscriptions $20 a month, for Netflix. “I’ve been watching a lot of BoJack Horseman. I think the humour and political commentary speak to the current cultural climate.”

Savings $575 a month, for his retirement plan.

Face Cleaner $50, for oil from Malin and Goetz. “It naturally and gently pushes any impurities to the surface. It’s done wonders for my skin.”

Vacuum Cleaner $1,400, for &, his Dyson vacuum cleaner. “I’ve saved money on cleaning products because & does my cleaning. I bought it a cake for its birthday.”

We’ve updated this article to reflect a change in Aman’s employment status.