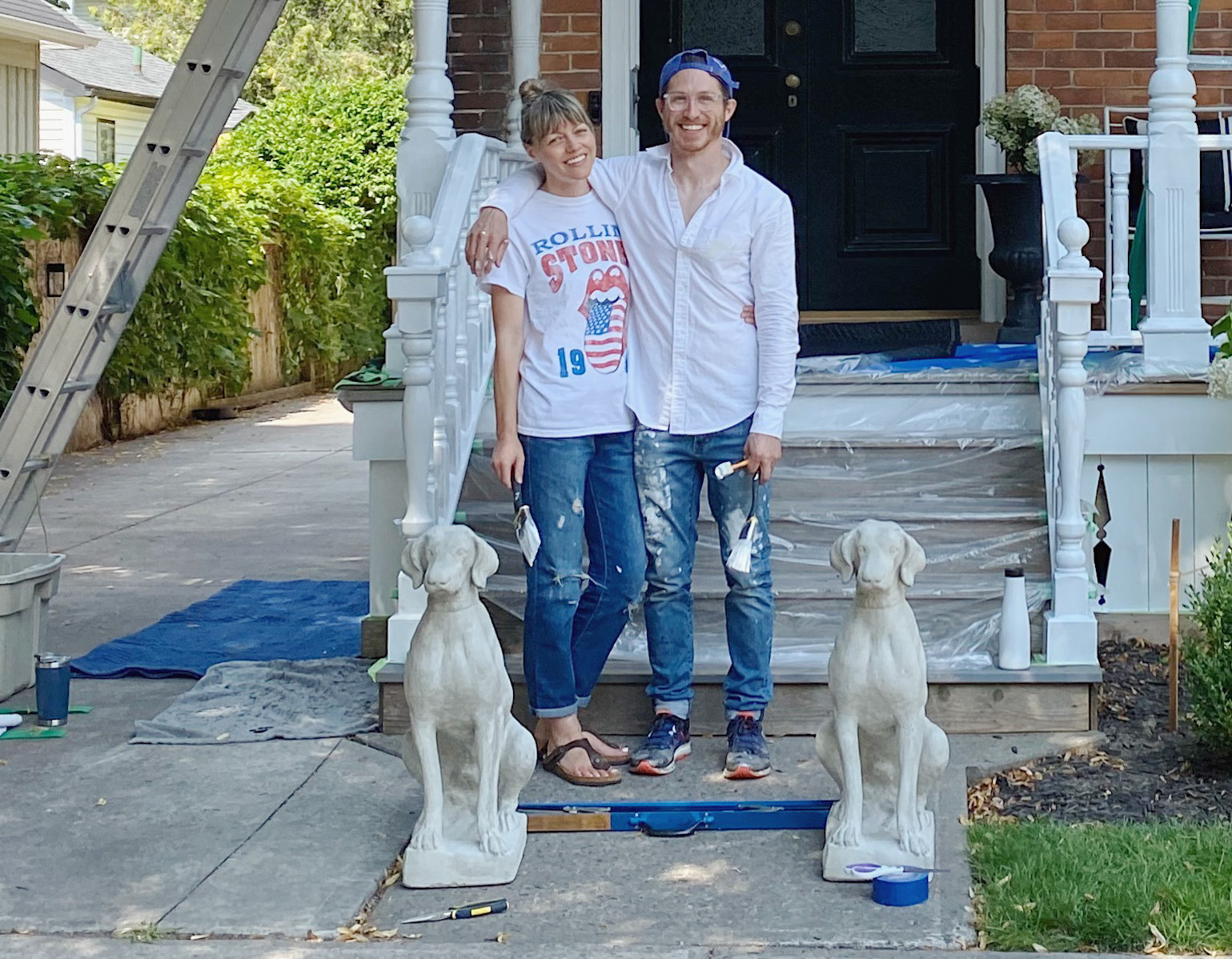 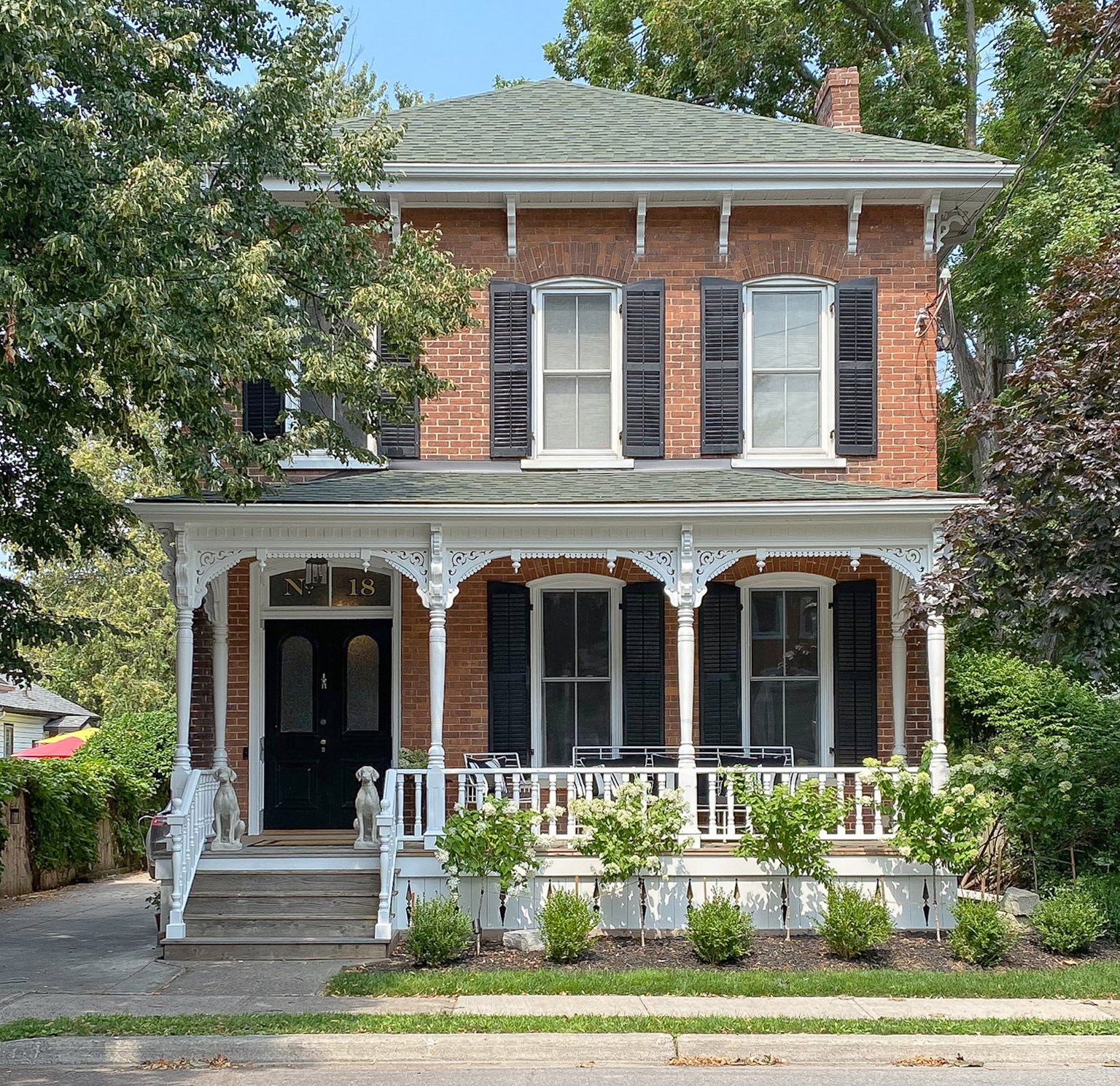 One night in 2018, Kevin came across a news story about a couple who had left the city and moved to Newfoundland. At the time he was living in a rented one-bedroom Parkdale apartment with his girlfriend, Sarah, and their Bernedoodle, Henry.

They shared an entrance with a lower unit that their landlord had turned into an Airbnb. “There were strangers in and out of the house,” says Kevin. “At one point, a pair of Sarah’s shoes were stolen.” They were looking to move somewhere less hectic and with more space. Kevin proposed they do something similar to the Newfoundland couple.

They moved to a 2,000-square-foot townhouse by a ravine in Oakville to test out the waters, not too far from the Toronto scene that they still loved. “Space and quiet were really desirable to us—even if Oakville wasn’t quite Newfoundland,” says Kevin.

By May of 2020, working remotely in the peaceful outskirts of the city, Kevin and Sarah were ready to buy their first proper house. They set their sights on picturesque Prince Edward County—where they had often vacationed—since they didn’t need to be close to the city for work. With the first wave of the pandemic in full swing early last summer, it was a buyer’s market.

During a weekend open-house blitz, Kevin and Sarah looked at about two dozen properties in person. None were quite right. Finally, while driving through the County, Sarah noticed an ornate house with a porch. “It didn’t have a for-sale sign, but I had seen it on MLS so I knew it was available,” says Kevin.

They contacted their agent to get them a showing, and an hour later they were in. The place had 3,000 square feet of space, 14-inch baseboards and five bedrooms—and there was a new-build, two-floor carriage house beside it. They put an offer in, and days later the house was theirs, with a closing date for the end of September.

“We never thought we’d be in a place like this,” says Kevin. “It’s old, it’s Victorian, but it gave us everything we wanted and more.”

After moving in, they sourced around 100 pieces of furniture from Facebook Marketplace and Kijiji, and painted the exterior and the rooms. Sustainability was a priority, so they added insulation to the attic and elsewhere, which made the house 40 per cent more energy efficient. Sarah created an office space in the back of the home, and Kevin took over the carriage house.

Kevin and Sarah are loving life in their new home. After work in the warmer months, they often jump in the lake for a swim at one of PEC’s beaches, and they’ve become big wine lovers, sampling the County’s many wineries.

They got engaged in June of 2019 but had to cancel their wedding twice due to Covid, so six weeks after they moved in, they decided to get hitched on the porch. They invited 10 family members and a photographer to come to their new home to celebrate.

On the day of the wedding, a motley crew of smiling, dressed-up friends—and neighbours holding sparklers—gathered on the sidewalk. After the ceremony, rented patio heaters kept everyone warm for the backyard reception. “It was low-key but massively special,” says Kevin.

Guests ate family-style bowls of pasta, and chicken and eggplant parmesan, as well as charcuterie, arancini and calamari from Seven Numbers, their favourite Italian restaurant on Picton’s Main Street. Everyone drank wine in the garage, mostly from Rosehall Run and Hinterland Wine Company—both County favourites. “There were more neighbours than invited guests,” says Kevin. “Cars were pulled over, people were honking.”

The custom-cast porch dogs, made in Guelph, are an homage to old limestone statues found in English and Italian gardens. Coincidentally, Kevin and Sarah recently learned that the previous owner had two real-life retrievers that used to hang on the porch: 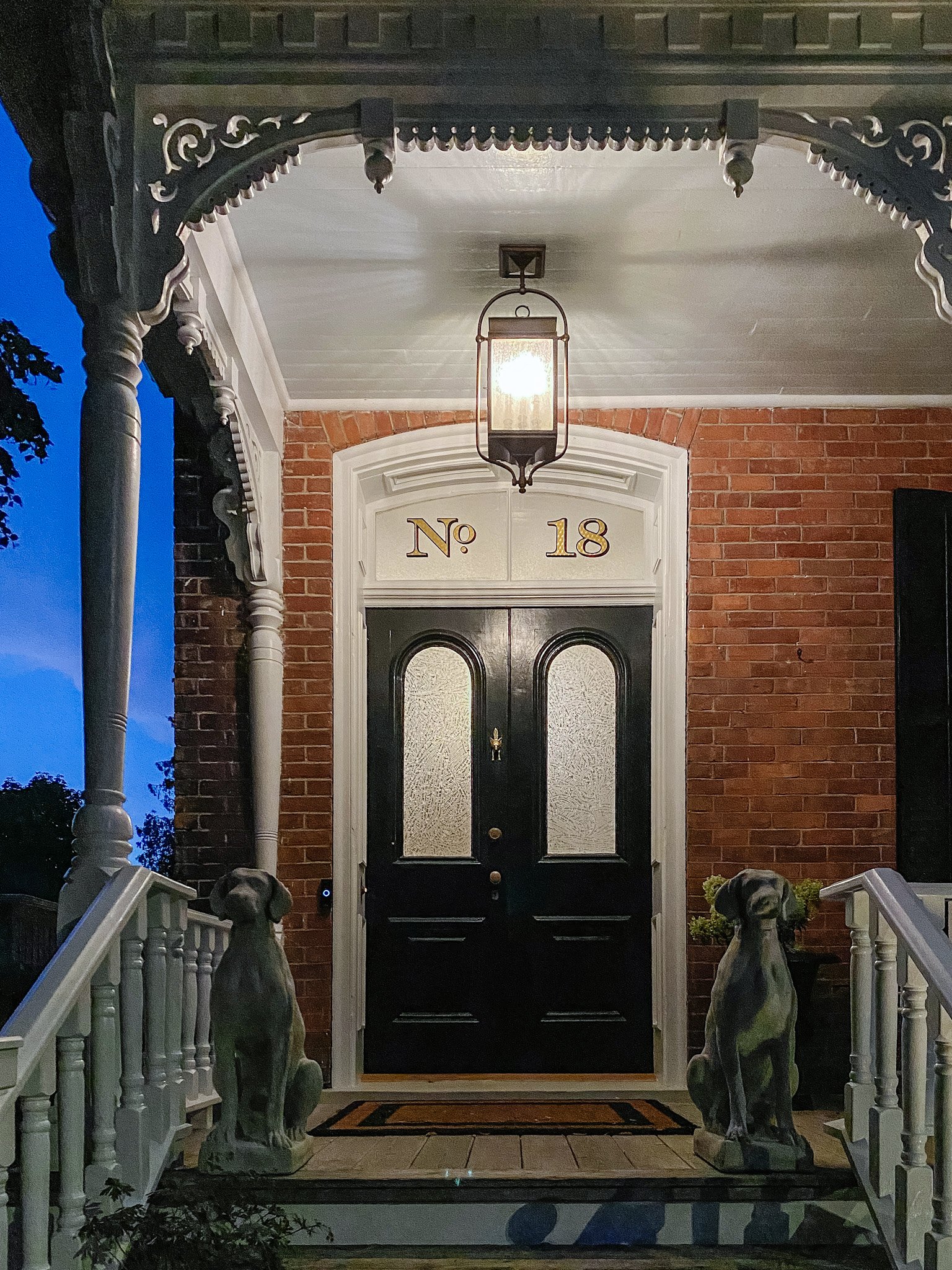 Here’s the rest of the front porch. They painted the beige shutters back to the original black: 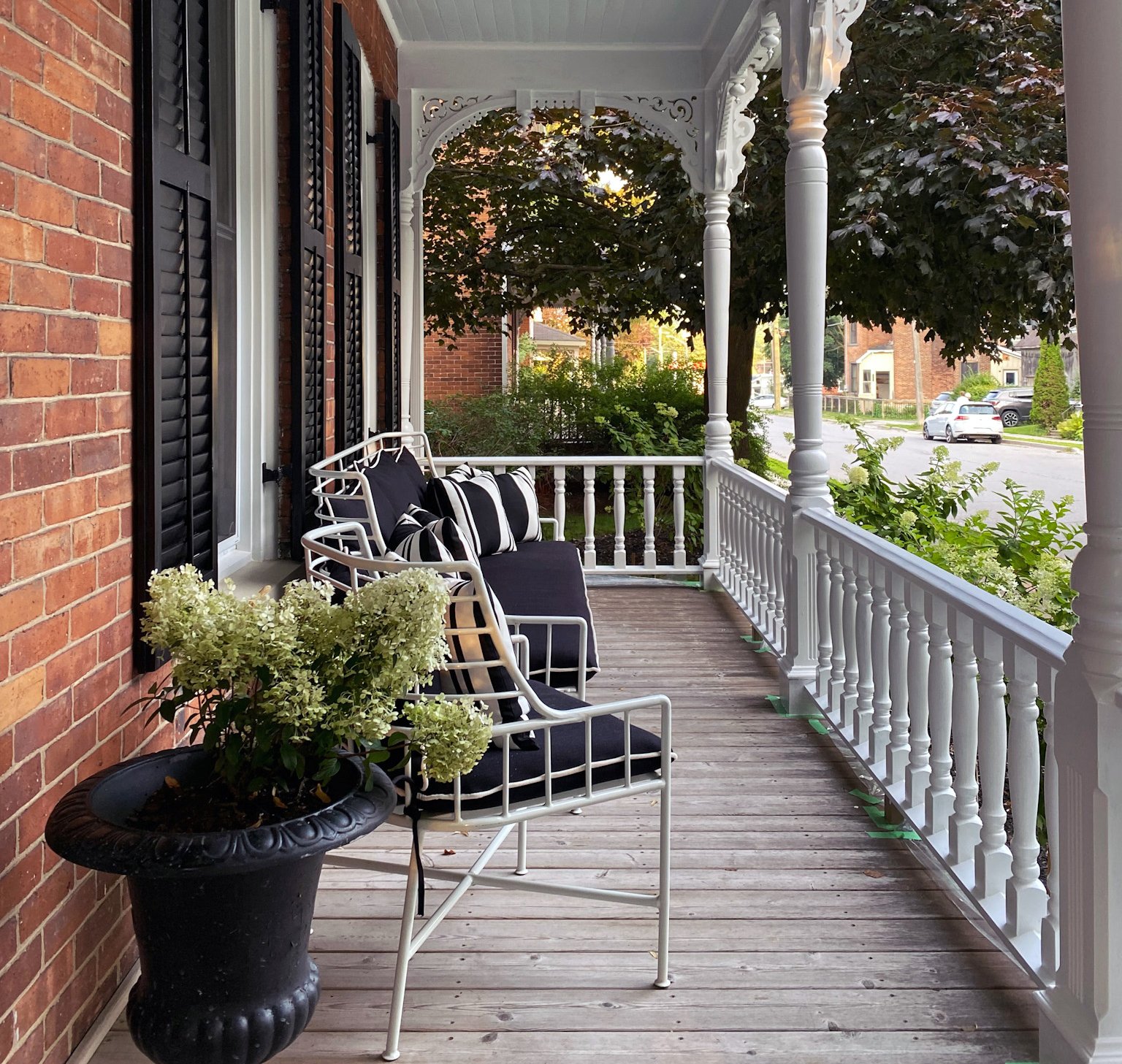 Kevin and Sarah loved the existing tiled entry, which reminded them of old lobbies and terraces in Florence and Tuscany. The console is from West Elm: 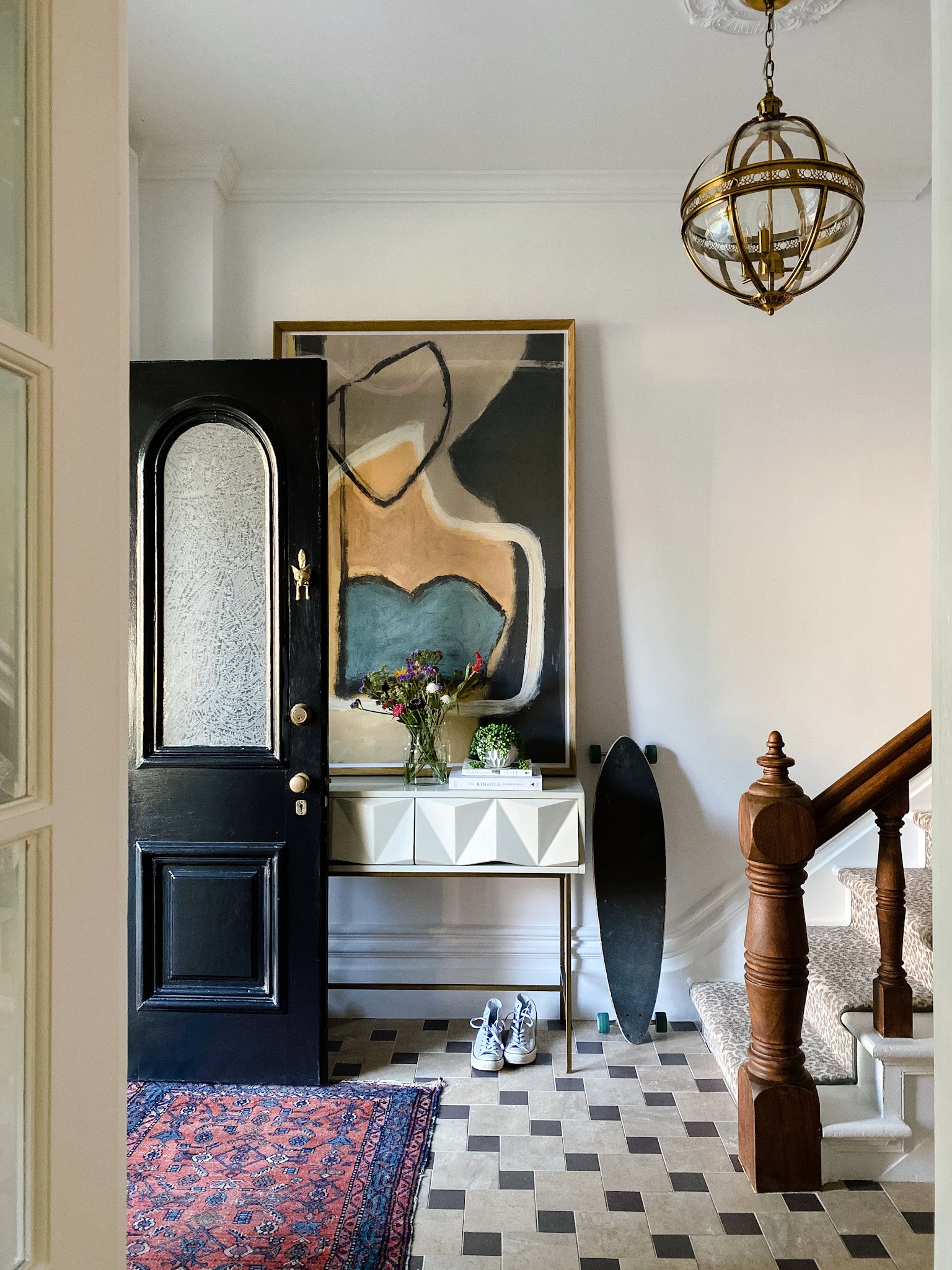 Most of the furnishings—including the rug and the print of John James Audubon’s “American White Pelican”—were sourced on Facebook Marketplace. “The Eames chair was one of the first decent pieces of furniture Kevin bought over 10 years ago, and it’s been with us ever since,” says Sarah: 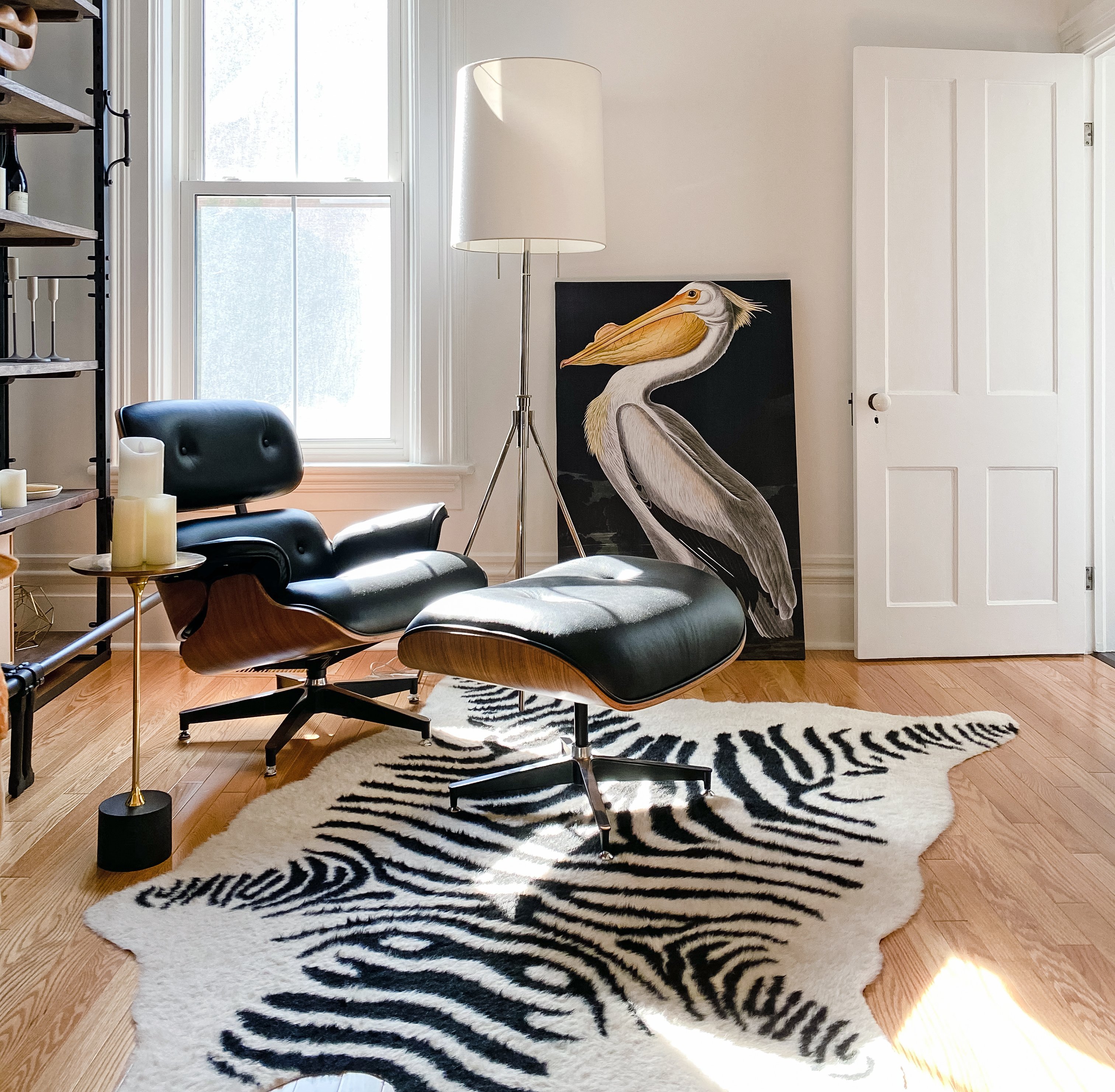 “We love the fun, warmth and rock-and-roll vibes of animal prints. We’re animal-lovers, so no real skins for us,” says Sarah. The animal motifs carry throughout the house: 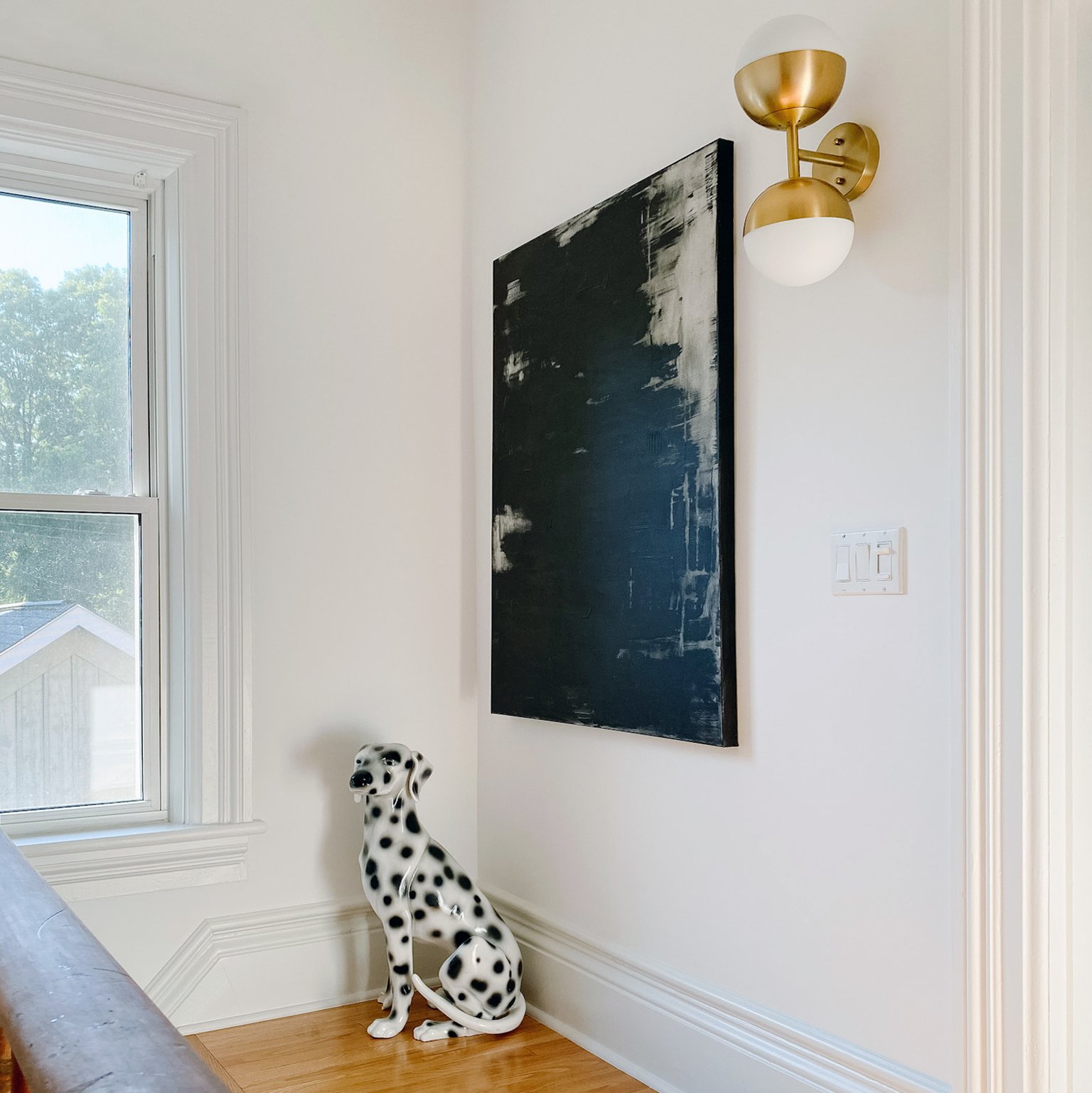 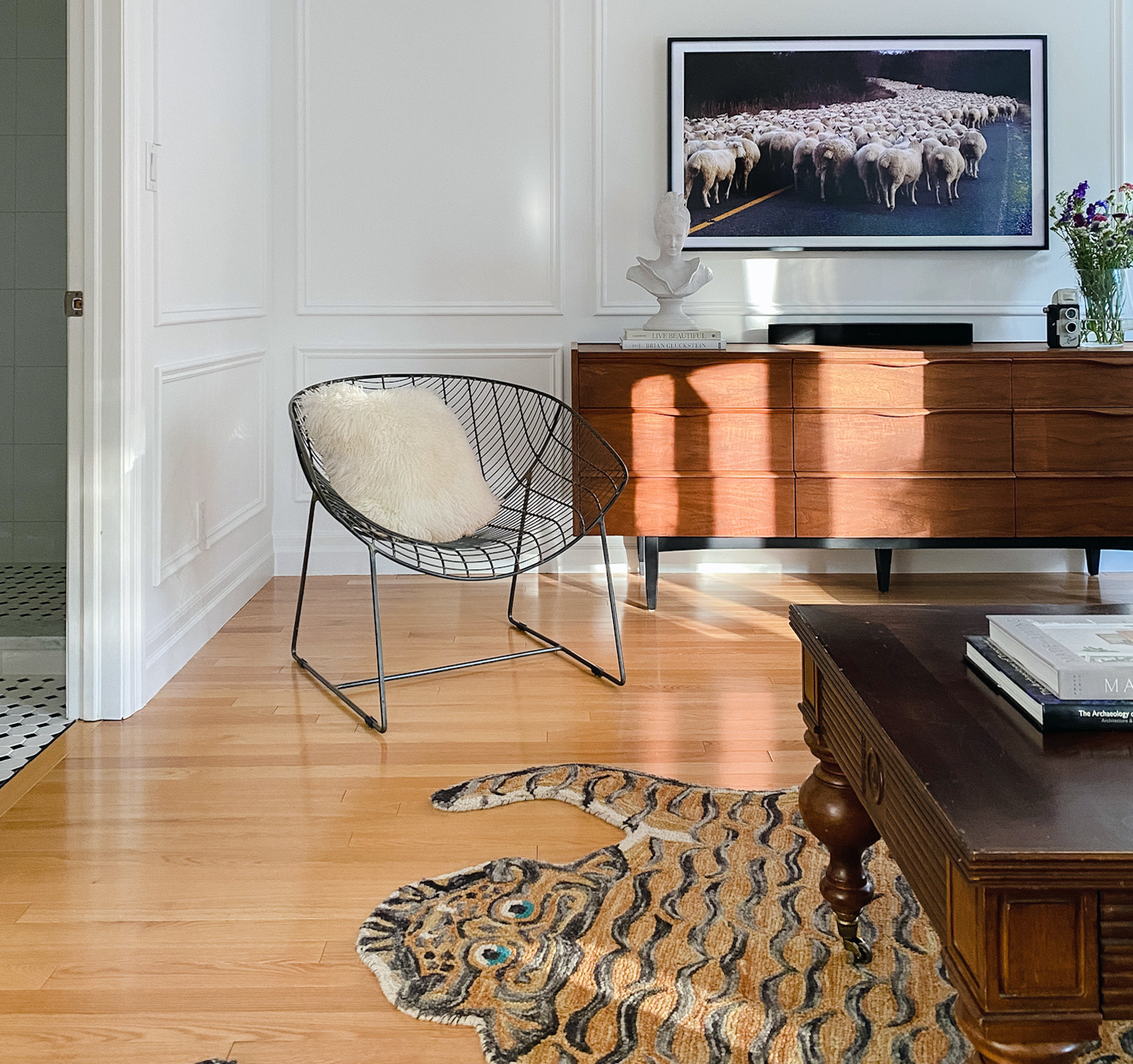 To brighten up the house, Kevin and Sarah painted the inside in Benjamin Moore’s Chantilly Lace. “At the start, I was so full of energy. I thought I could paint the entire house in two days,” says Kevin. In reality, he needed to recruit some friends to help: 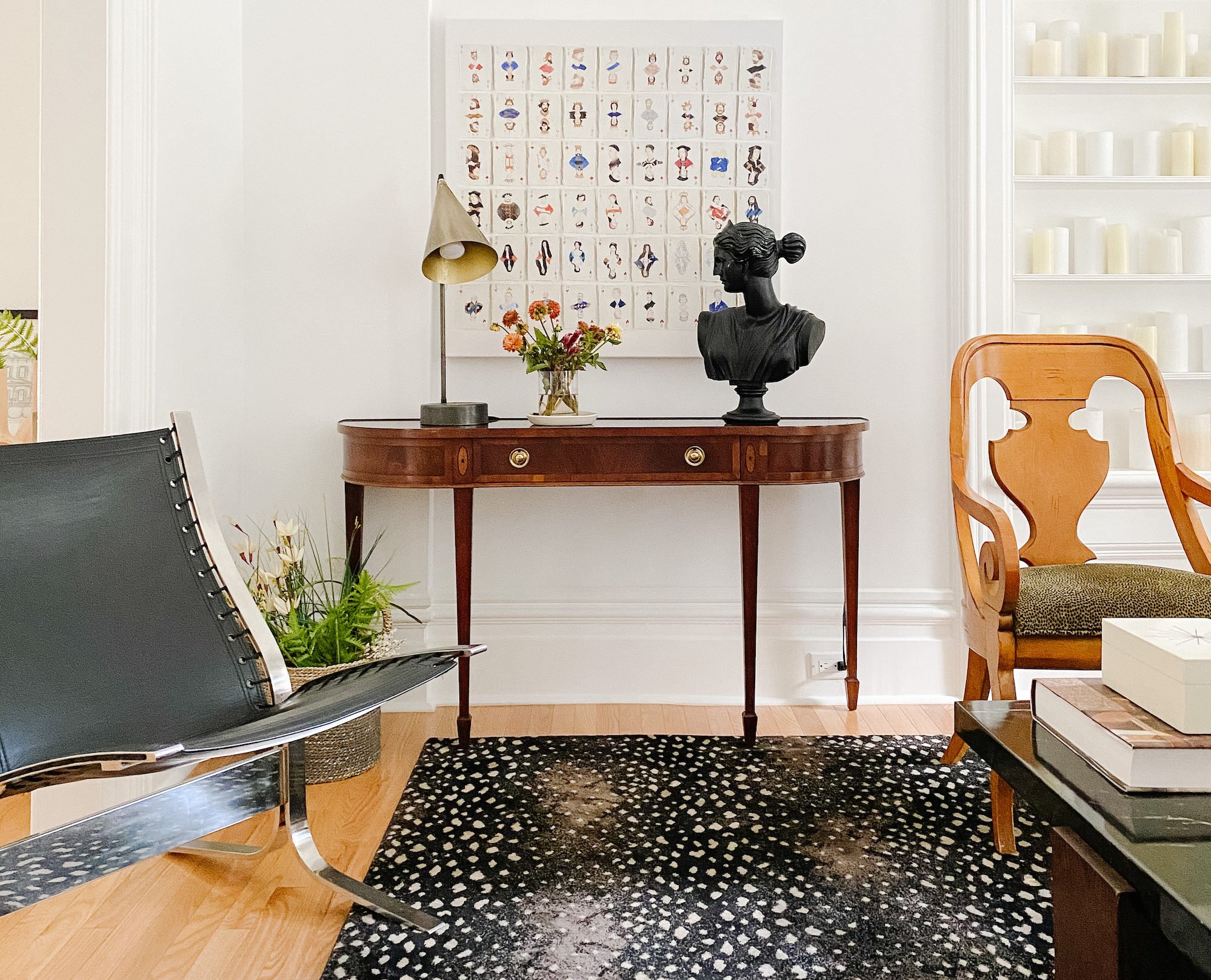 There are 80 candles in the alcove, which the couple put in after the wedding. “They ended up looking cool, so we left them,” says Kevin. The battery-operated ones emit a dreamy glow at night: 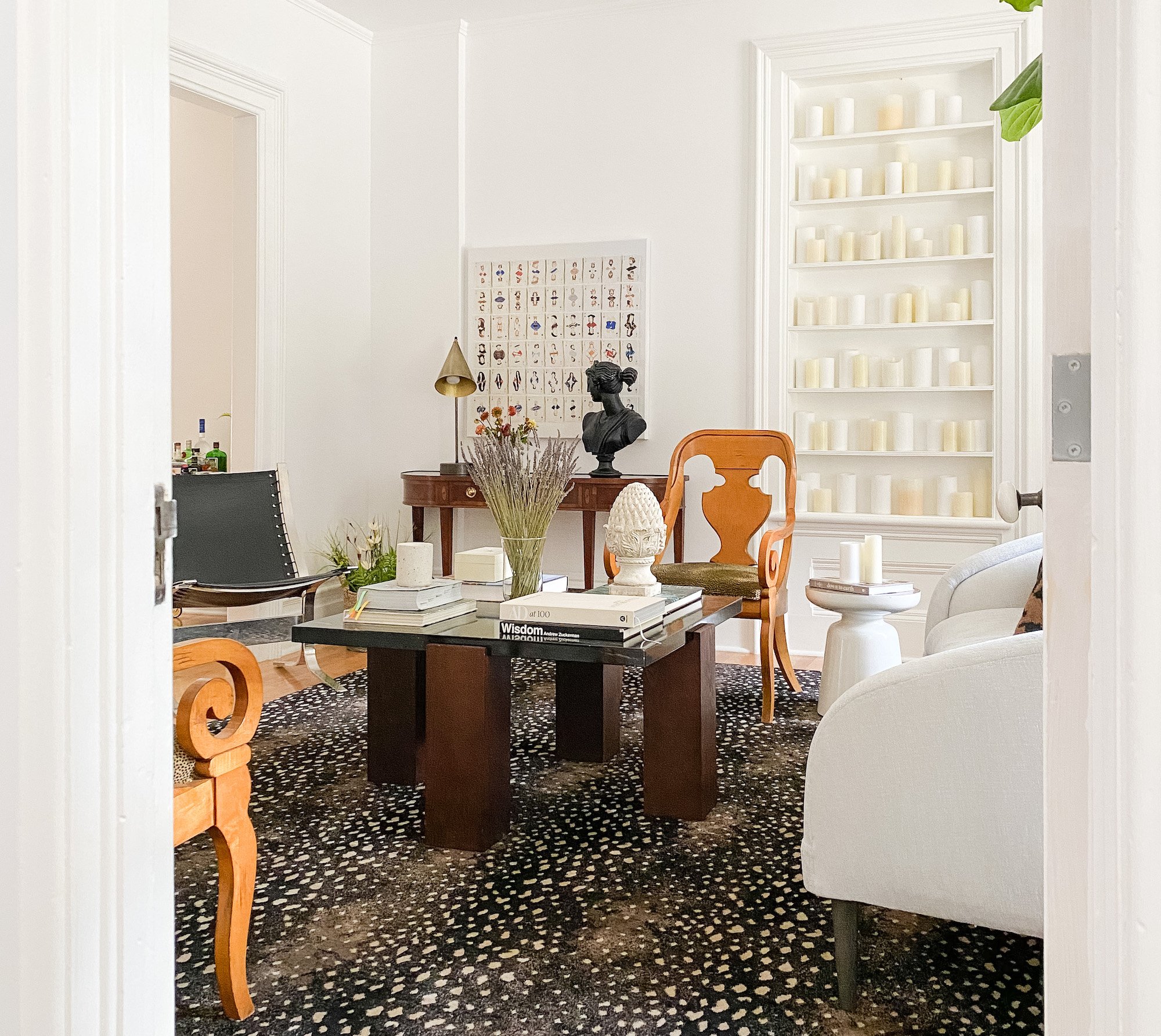 Another Marketplace find, the sconce is a faux Serge Mouille. The abstract acrylic painting “Flowers in the City #2” is by Vivian Bennett, an artist based in Alberta: 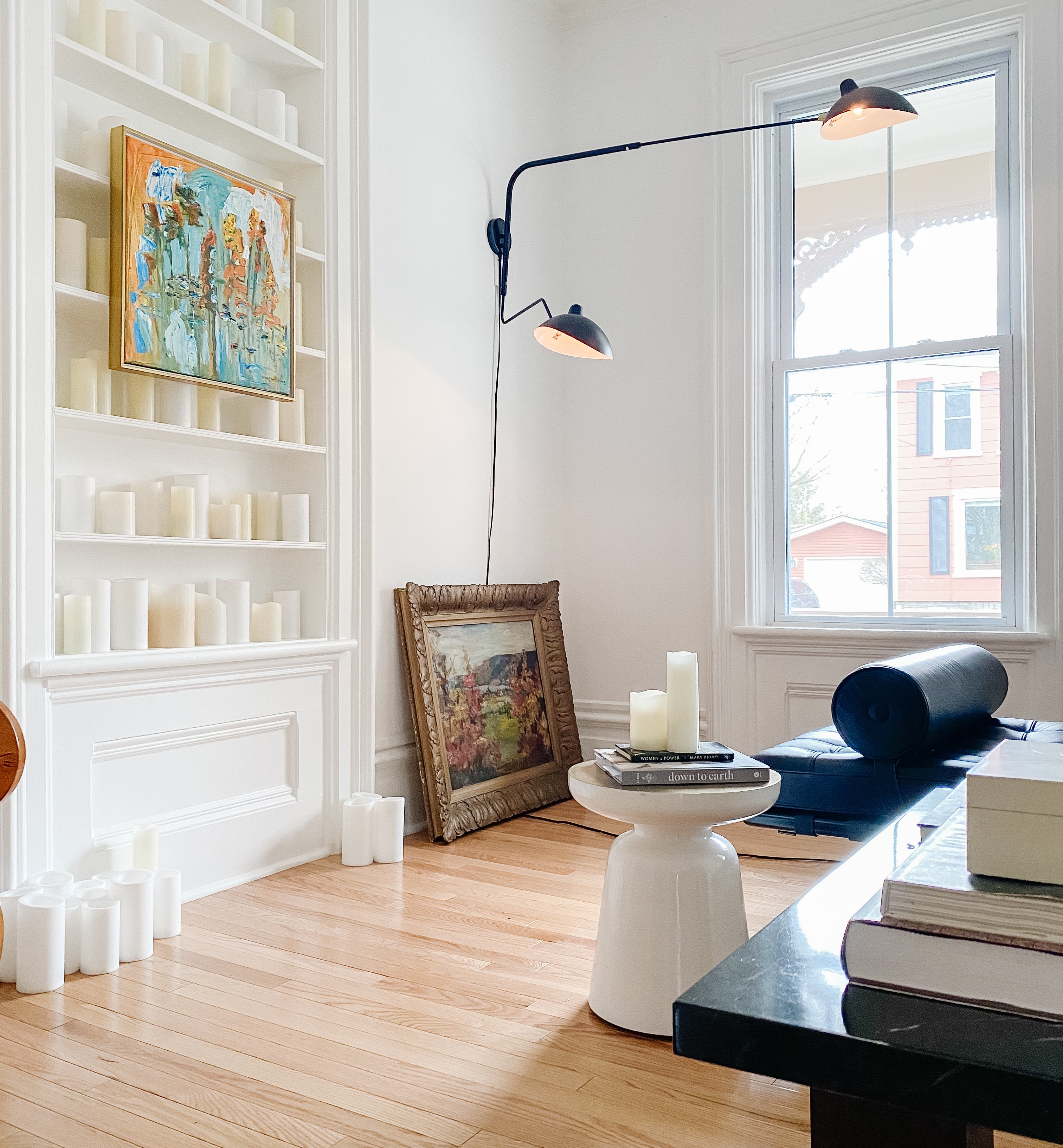 They replaced the pot lights in the hallway with dramatic IKEA pendants. Between those and the sconces, the couple swapped over 50 light fixtures for low-energy bulbs: 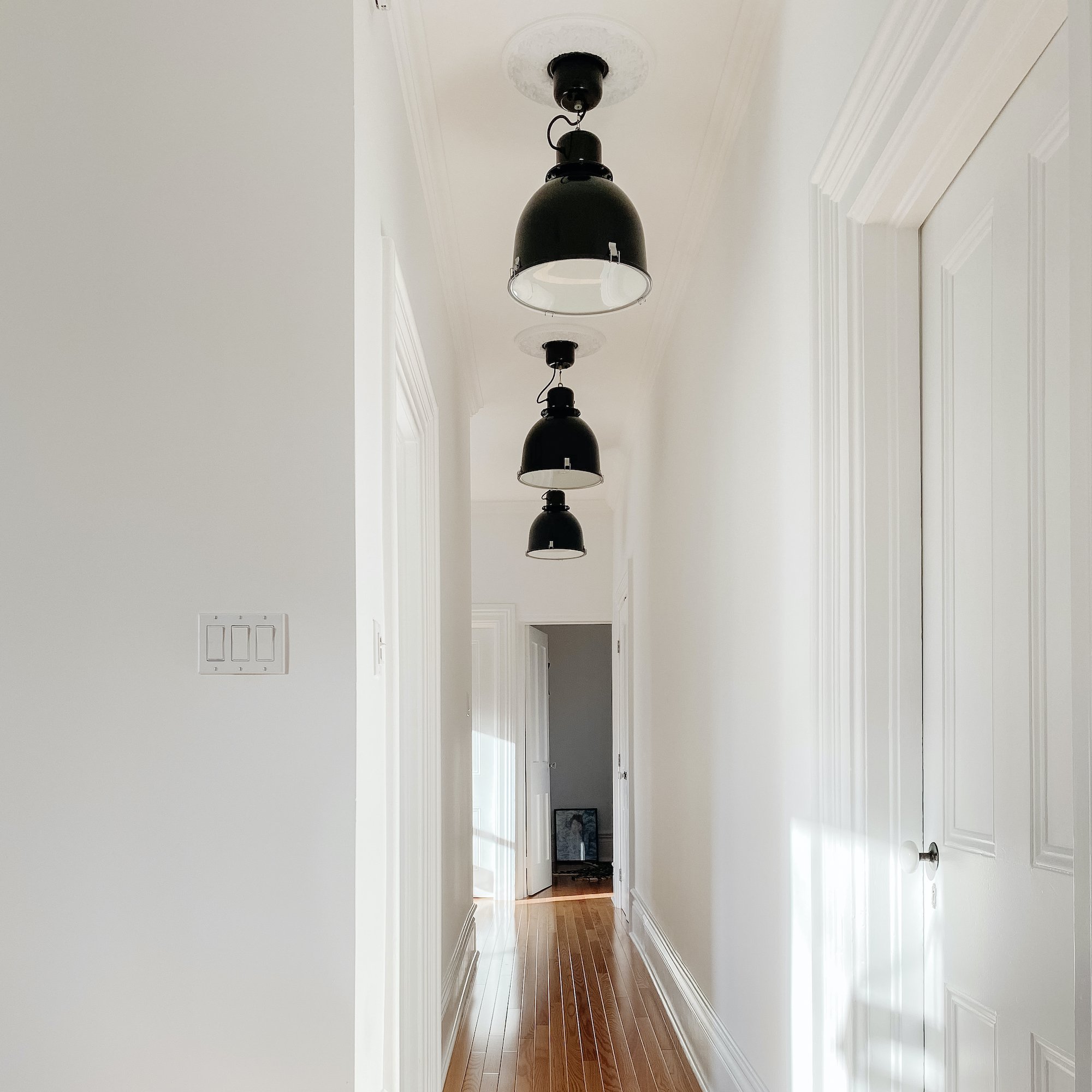 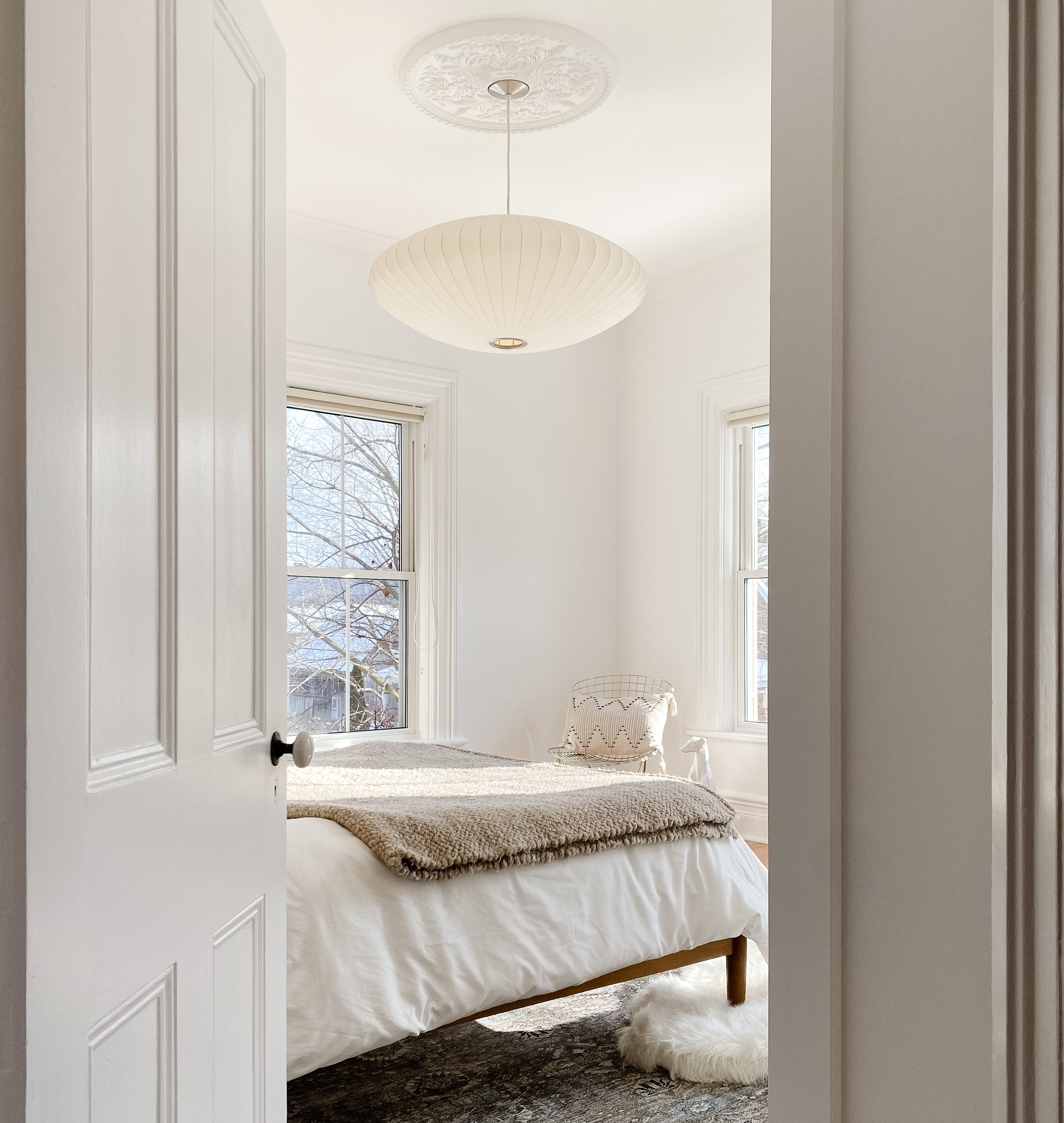 And here’s a guest bedroom: 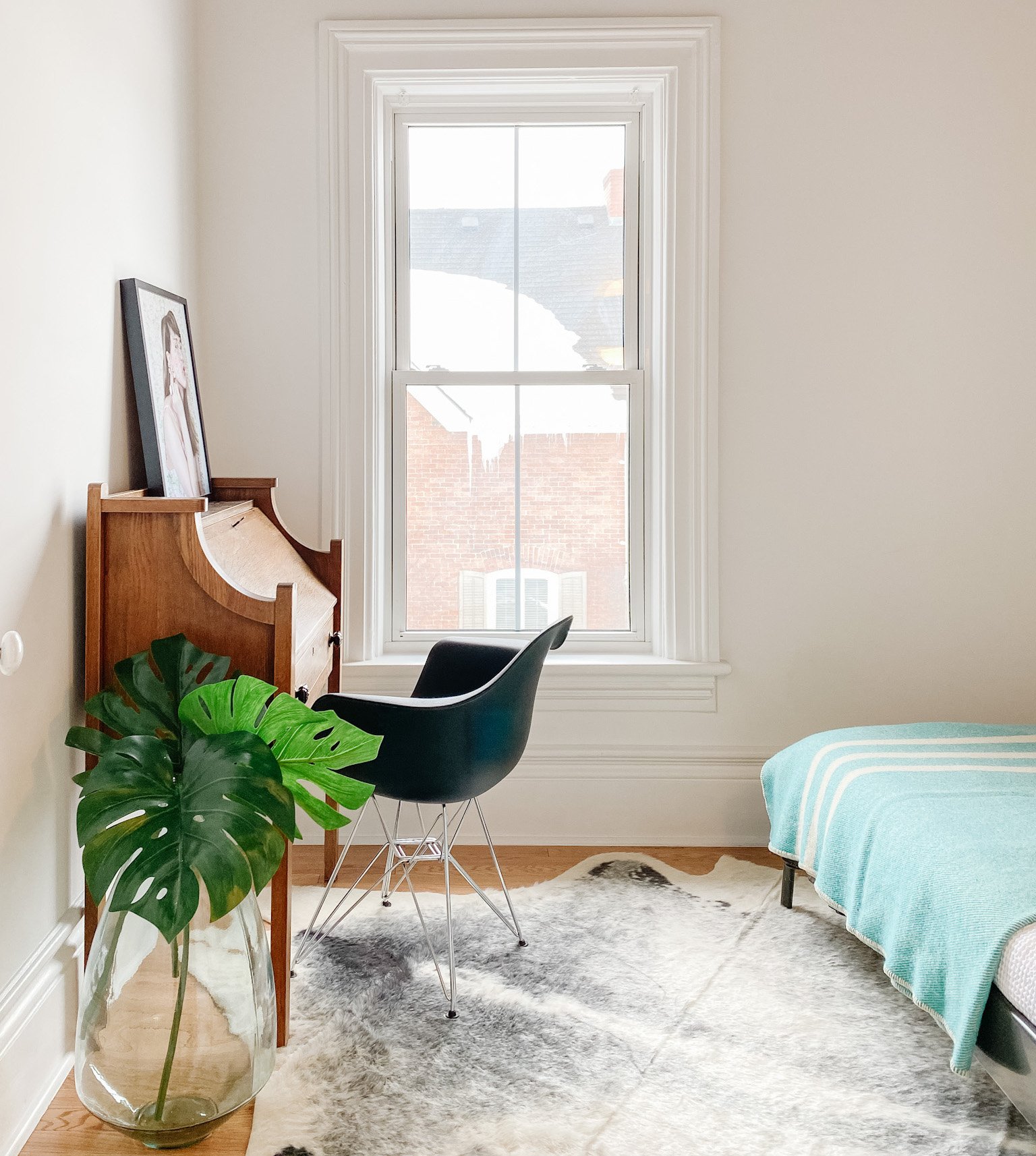 The kitchen catches the sunrise on one side and sunset on the other. The French bistro chandelier is from Facebook Marketplace. It didn’t work when they got it, despite the seller’s promises, so Kevin’s dad had to rewire it. Kevin and Sarah sourced the Crate and Barrel marble-topped island from a bakery: 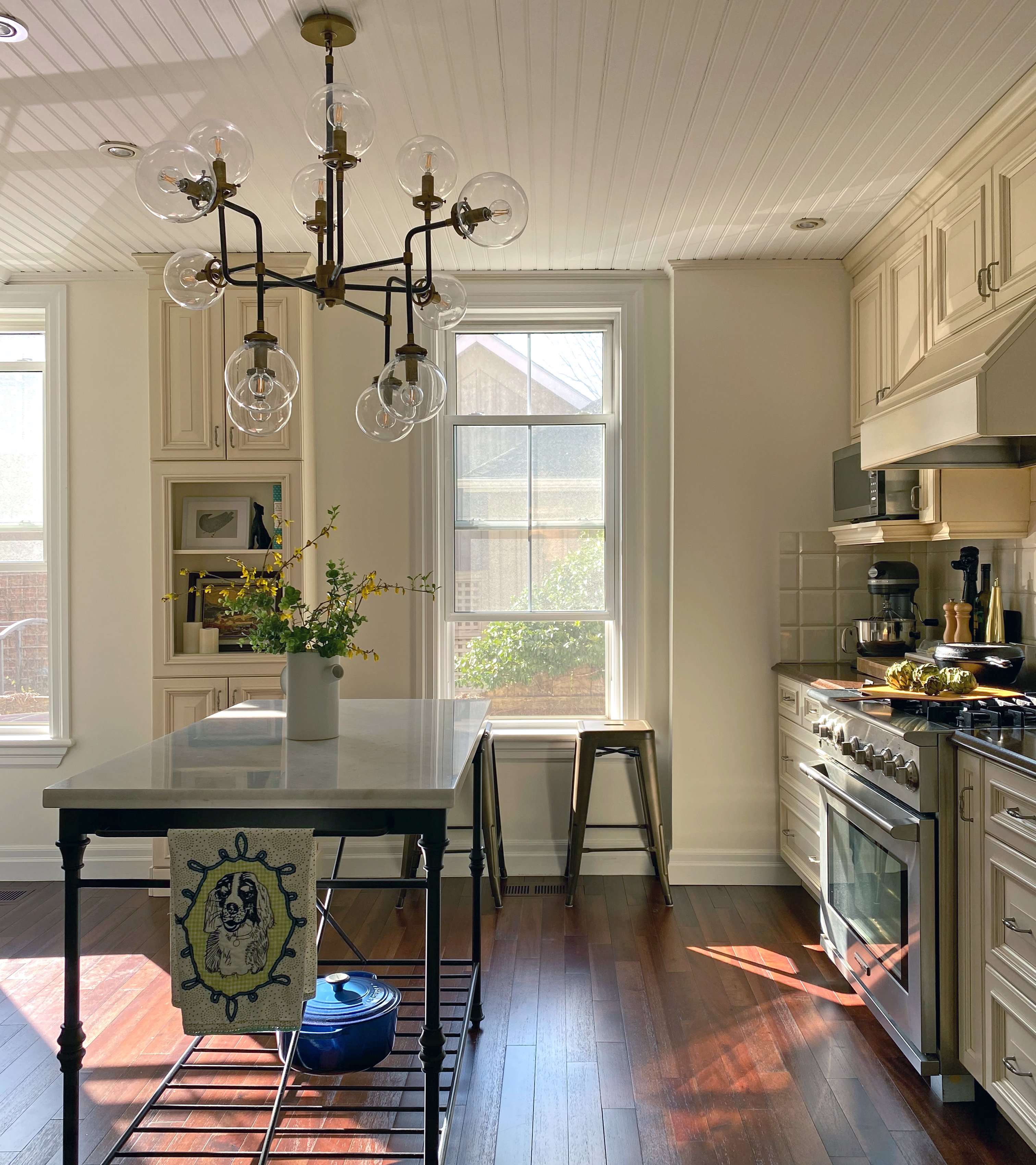 They’ve only been able to host immediate family so far, but the dining room always turns into the centre of the action. “We both love gardening,” Sarah says. “The foliage in the large vase is fresh cuttings from our garden.” They also pick up flowers from Floralora at the Picton Farmer’s Market and Coriander Girl: 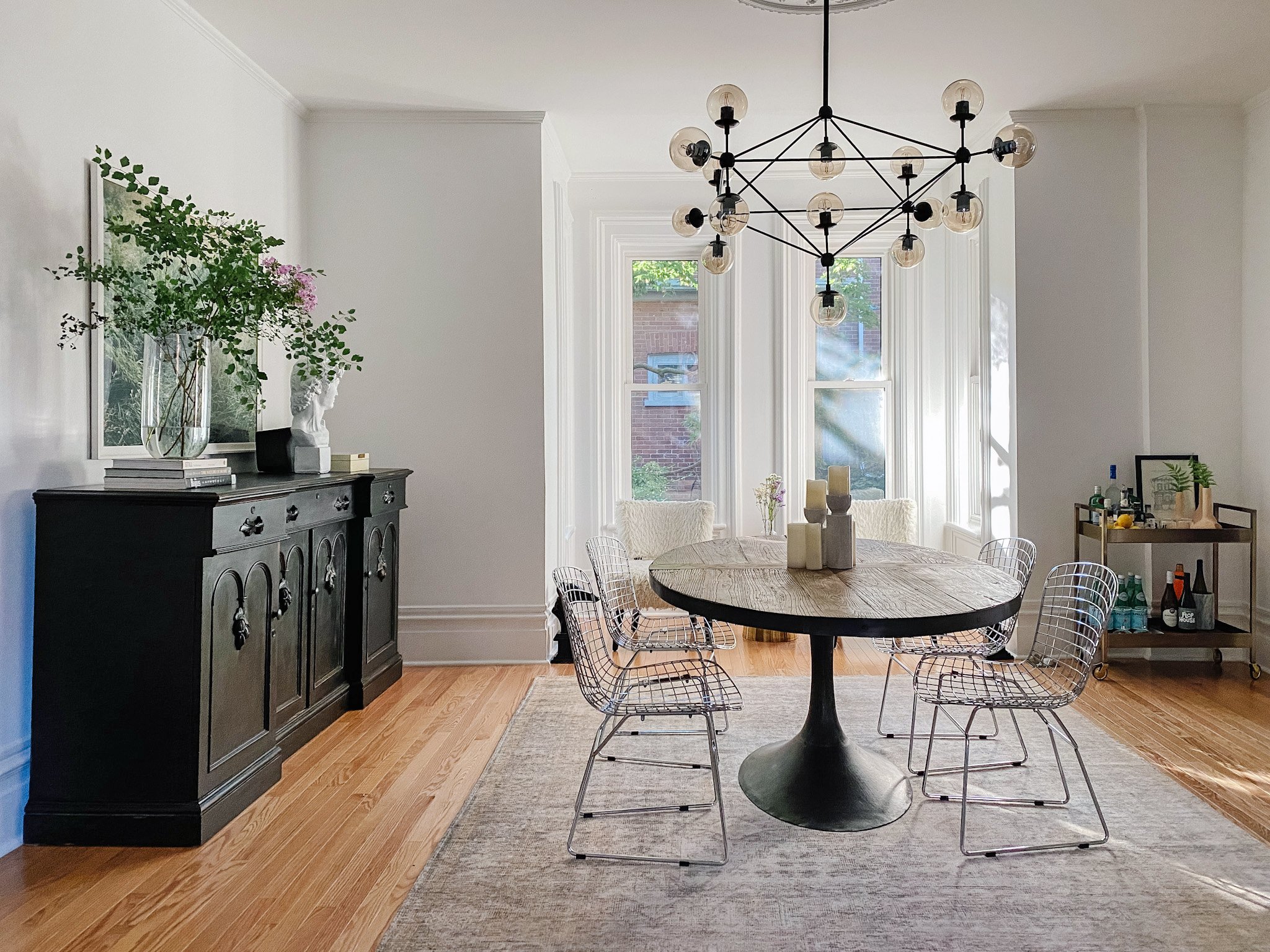 The chairs in the screened porch face the side garden and a huge maple tree. “It’s the coziest room in the house, and the original floors and pine ceiling make it smell incredible,” says Sarah: 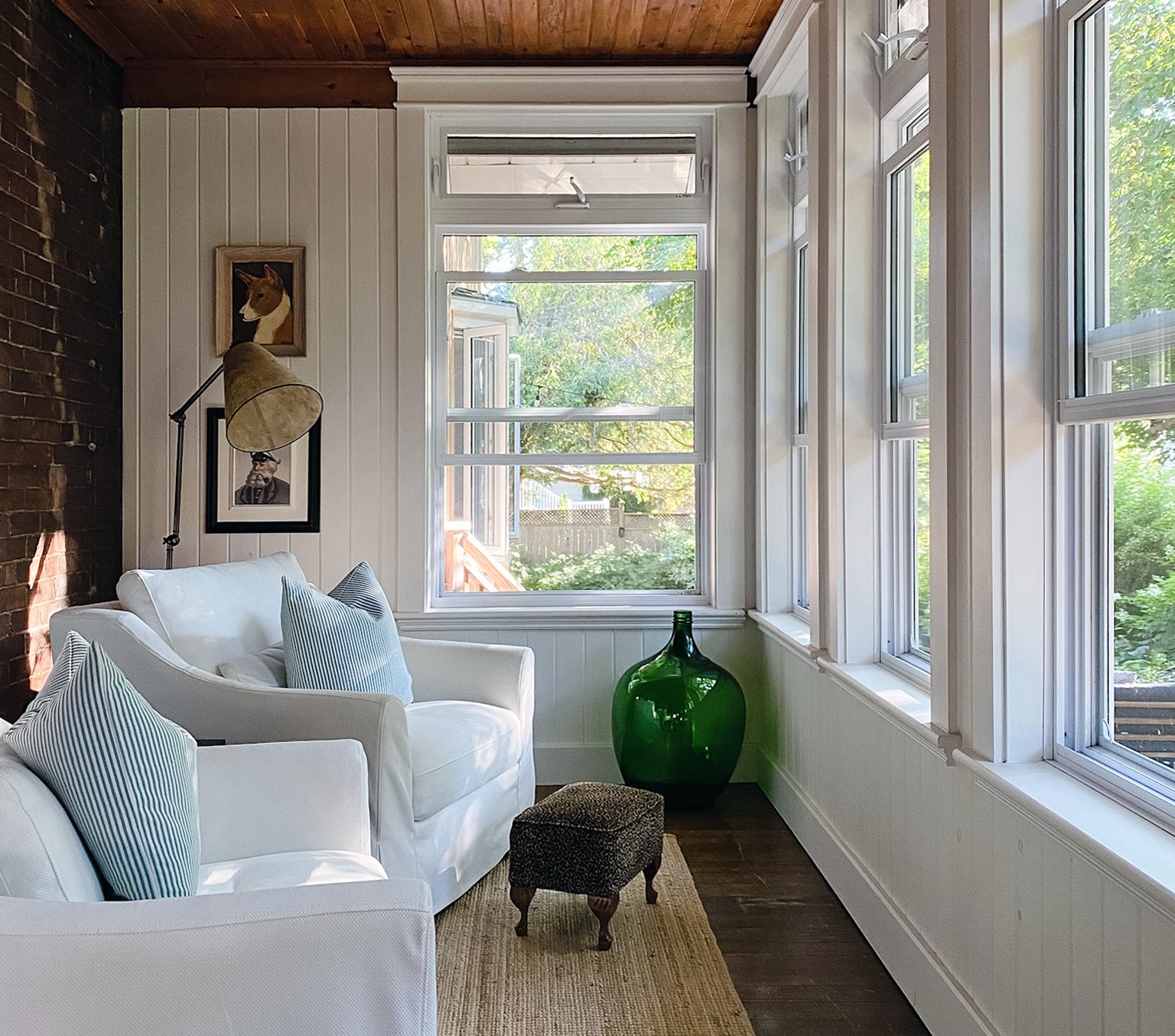 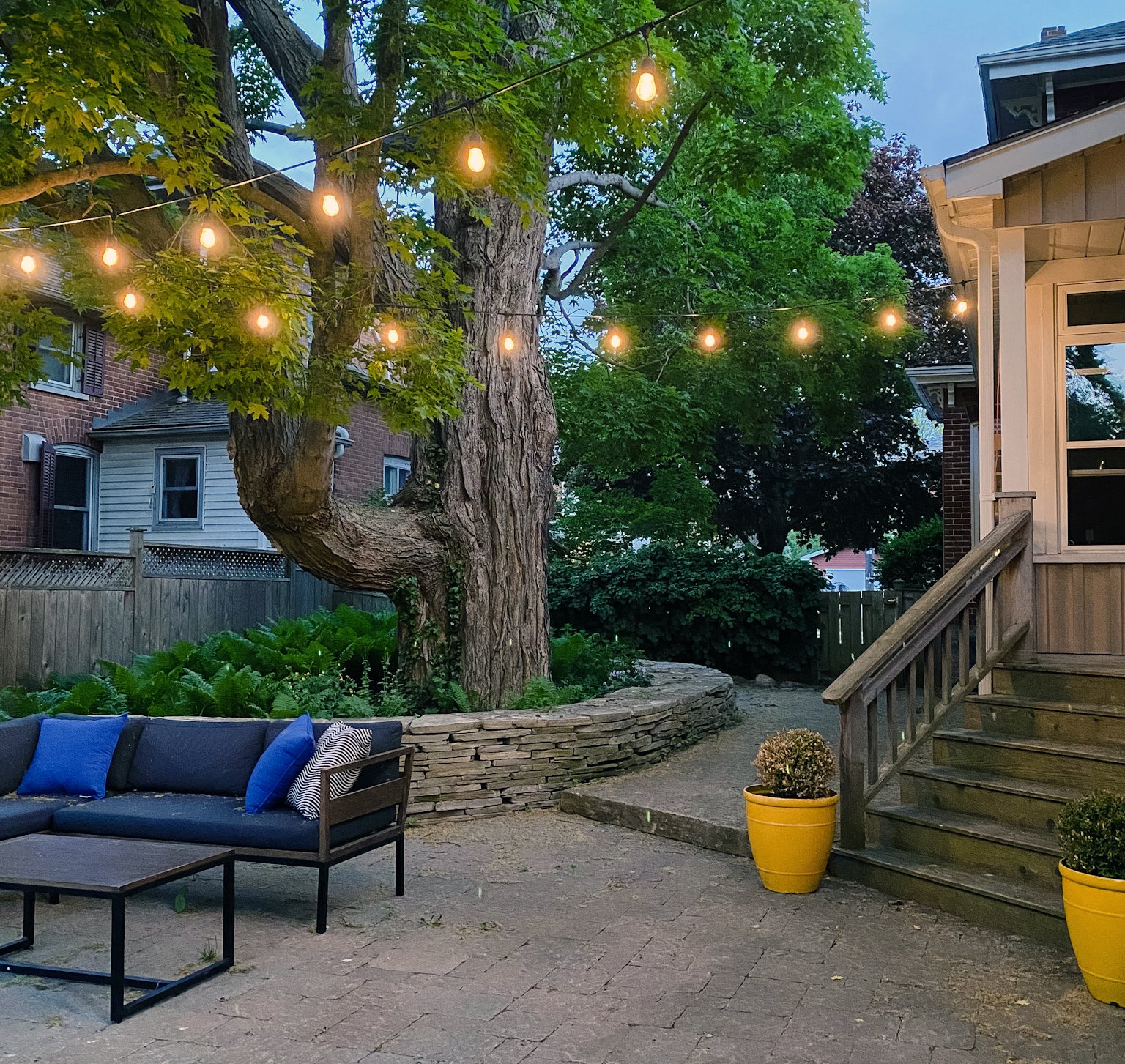 And here’s Henry, a good boy, posing in the golden-hour light: 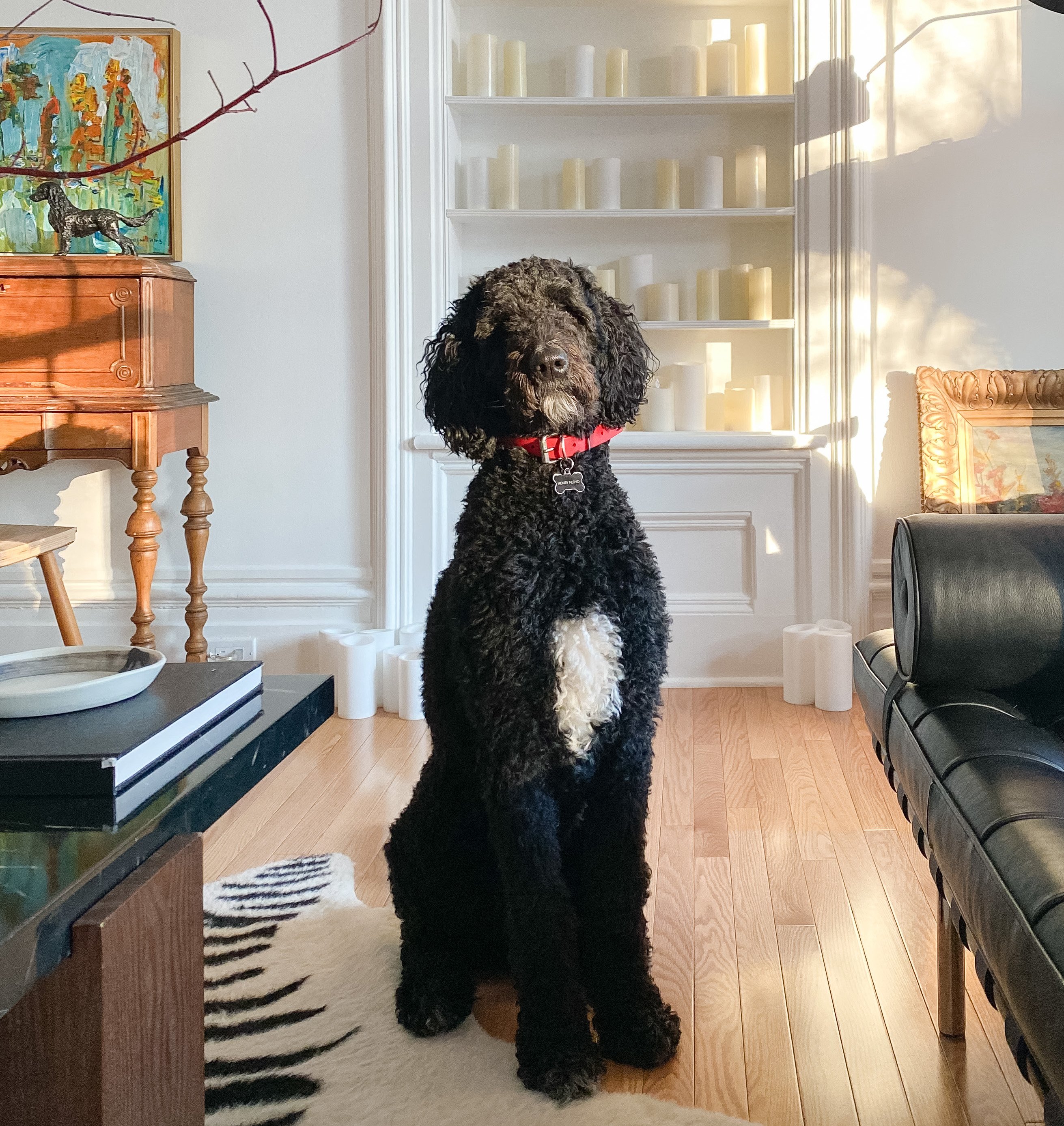