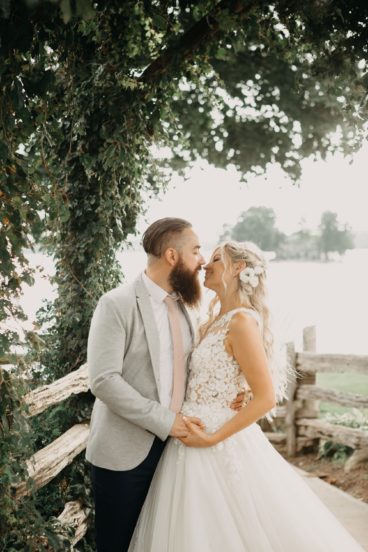 Inside a lakeside family affair

In 2015, Sarah Nicole started working at Concourse Media. Her 11-year marriage had ended a month earlier, and she was happy to have a nine-to-five job to keep her mind occupied. During her first week, a co-worker pointed out Shane Landry. “He wears plaid everyday,” she said. Sarah was intrigued.

The two started talking and quickly became friends. Shane was also recently out of a long-term relationship, so they bonded over their lifestyle changes. He’d often swing by her house to hang out and play video games with her three kids, and over the next year, their friendship morphed into a romance.

In 2017, Shane decided to propose during one of Sarah’s modelling gigs. She was posing in a winter wedding scene for a friend’s bridal boutique, and he was slotted to be her groom. They were shooting a “first look” scene, where Sarah was meant to turn around to see her fiancé for the first time. When she did, Shane was down on one knee holding an engagement ring. The two spent the next nine months planning an intimate wedding at Puslinch Lake.

The night before the ceremony, Sarah had a sleepover with her daughters, sister and best friend. In the morning, they all went to the salon together to get ready for the wedding: 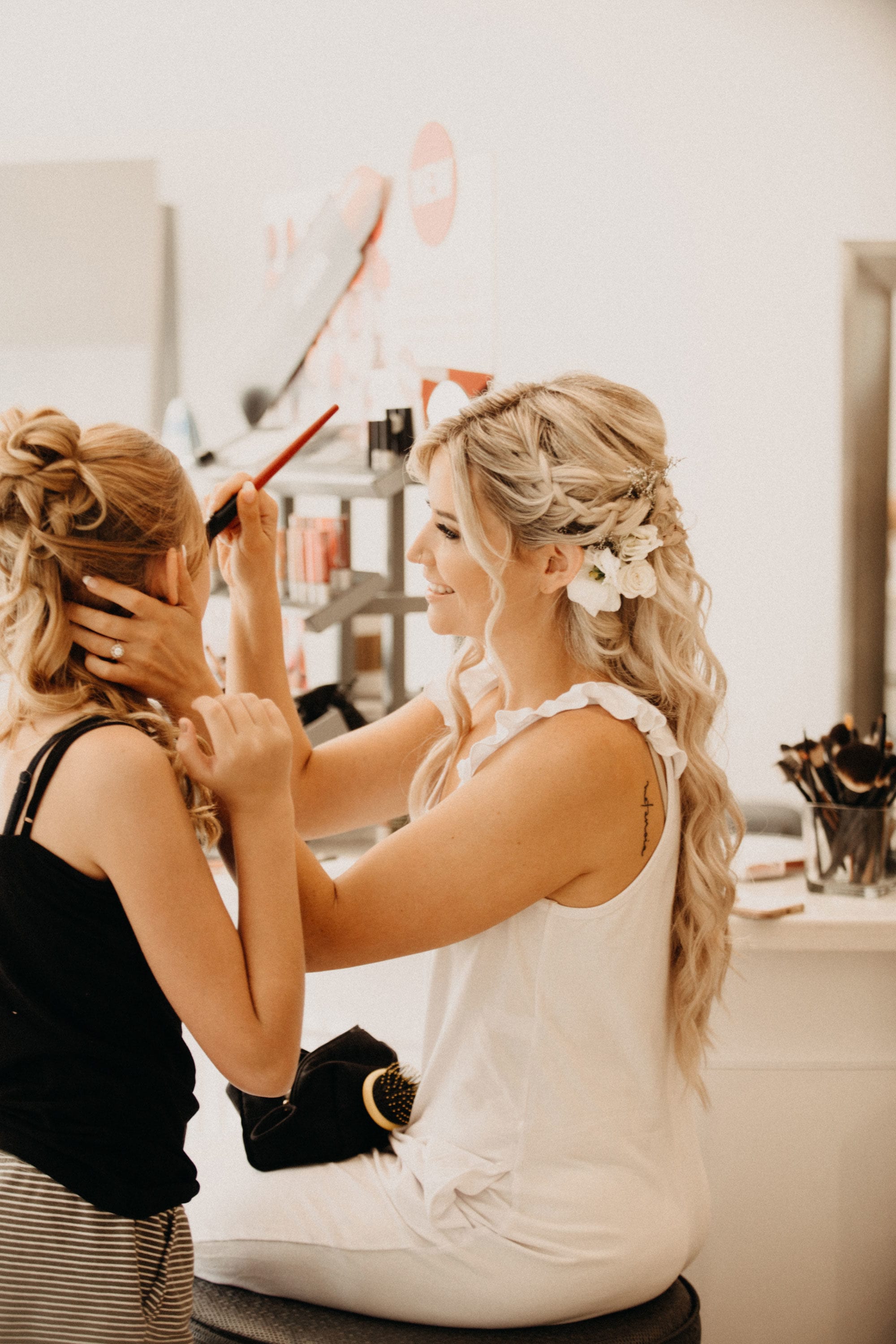 Sarah bought her dress from a consignment shop in Guelph. She liked the idea of wearing something that had been a part of someone else’s story: 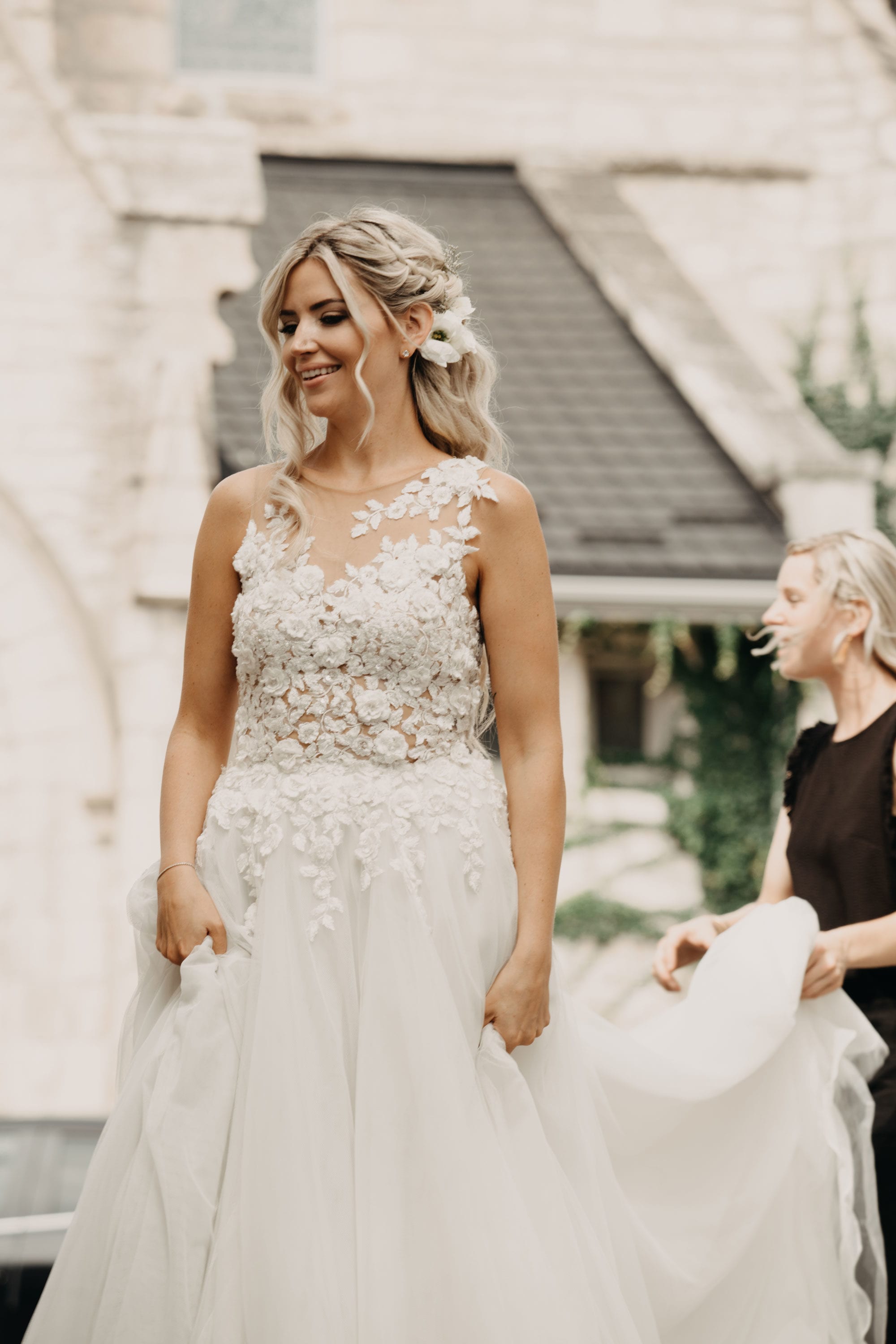 Each bridesmaid wore a rented infinity dress, which could be tied in a variety of ways: 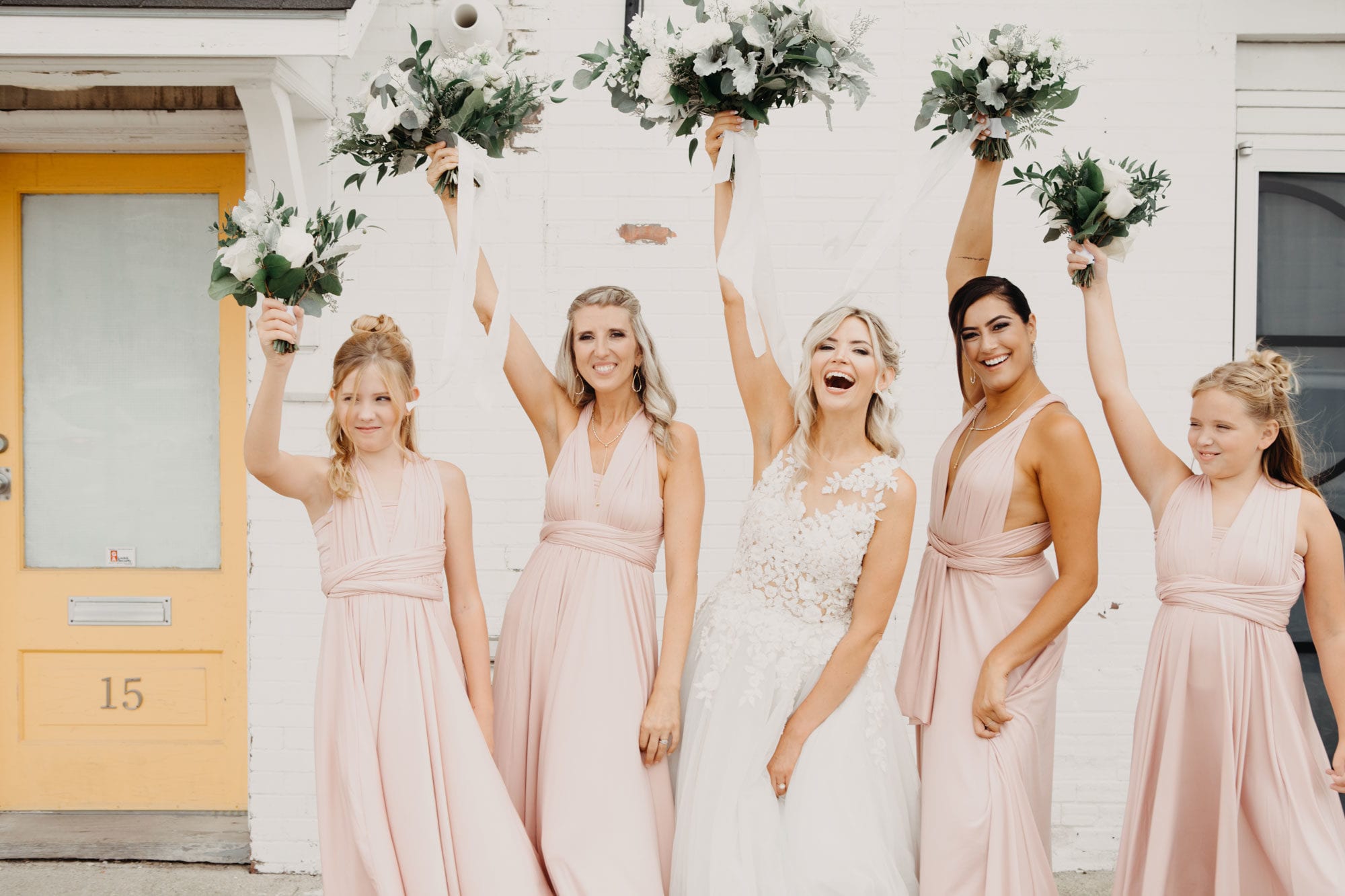 Sarah’s daughters were junior bridesmaids and her son was a groomsman: 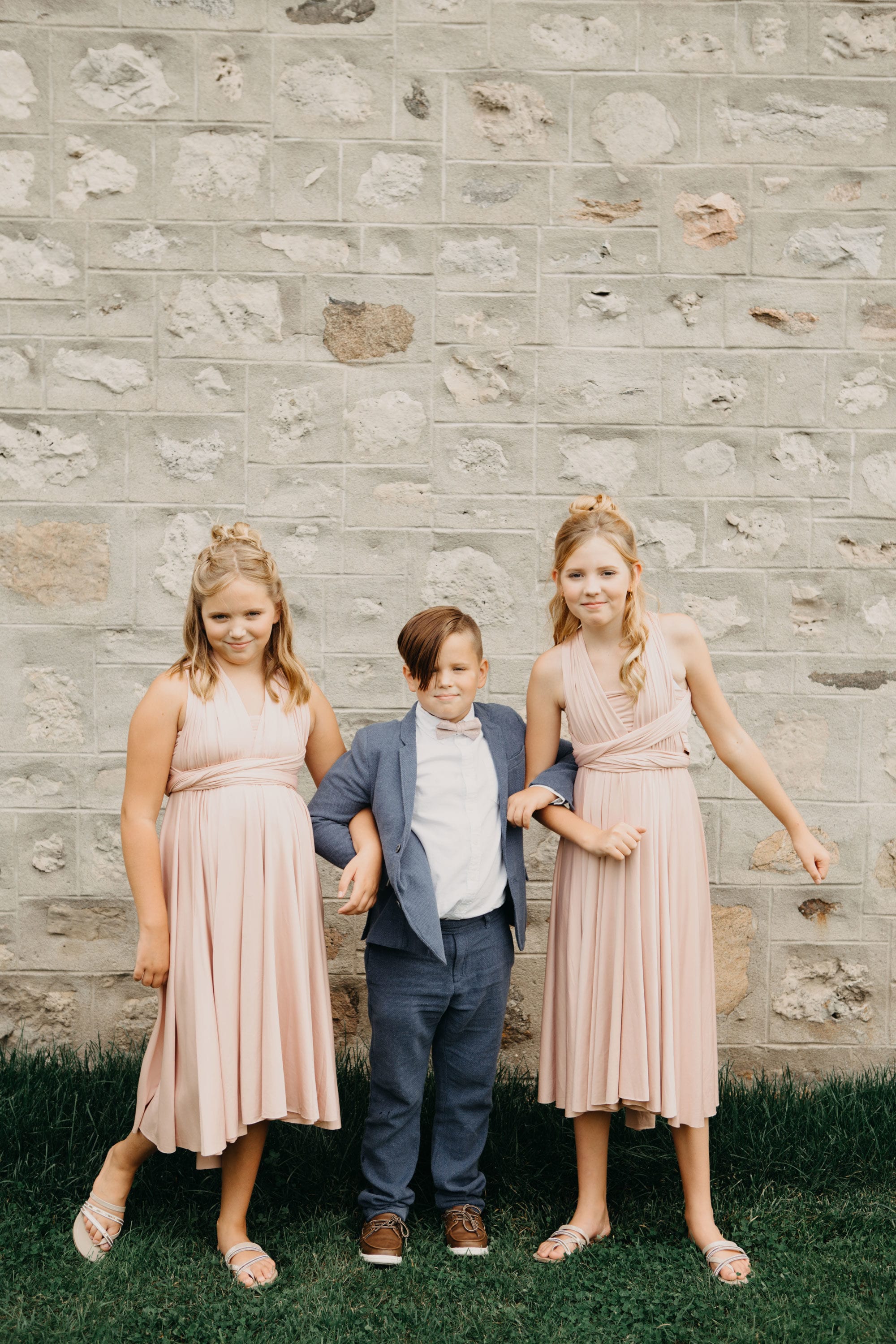 The ceremony was held in the historic Ellis Chapel. As Sarah walked down the aisle, her uncle played the Imperial March from Star Wars on an acoustic guitar. Her father walked her halfway down the aisle, then her son escorted her to the altar. “They’re the two leading men in my life,” says Sarah: 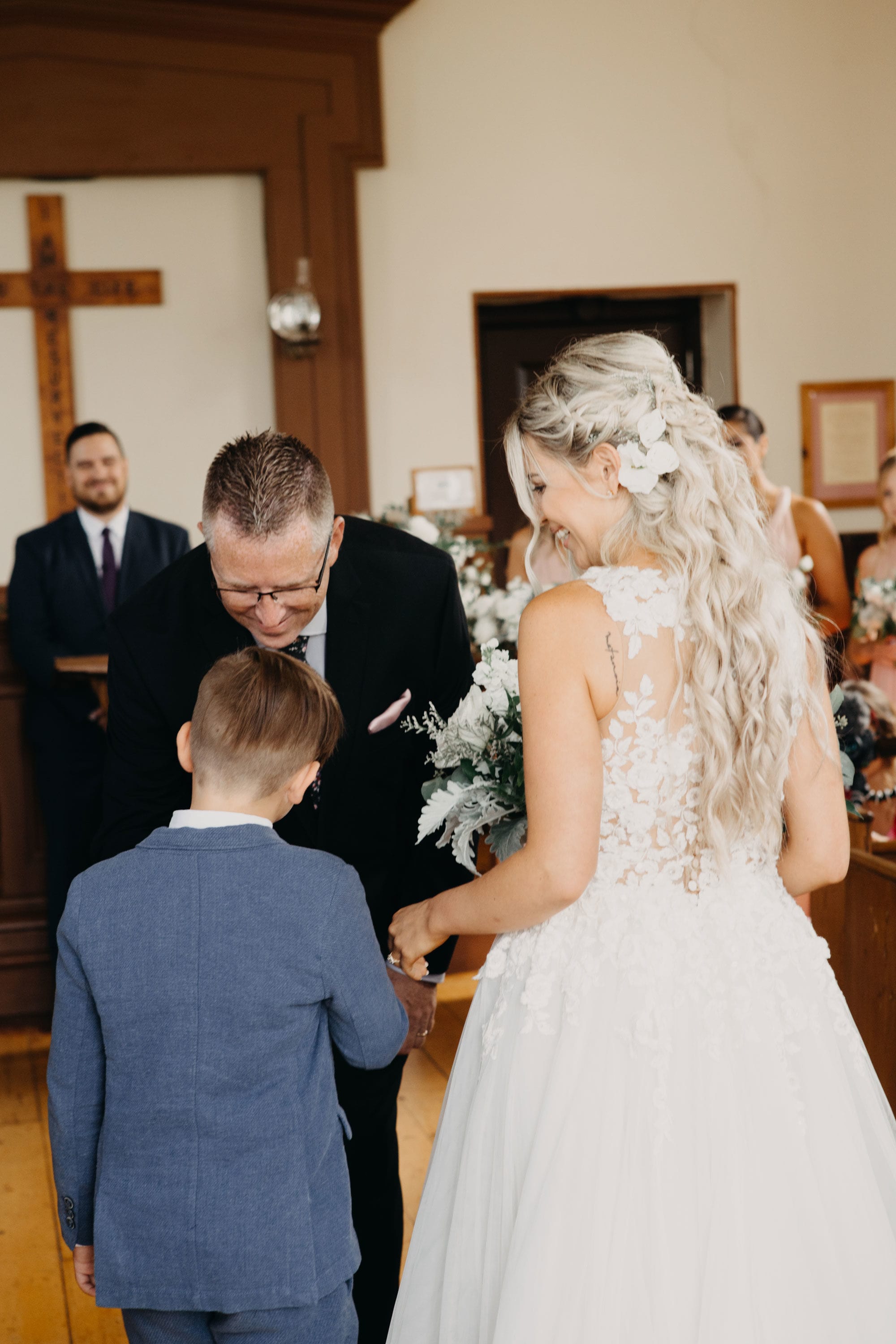 The couple wrote their own vows: 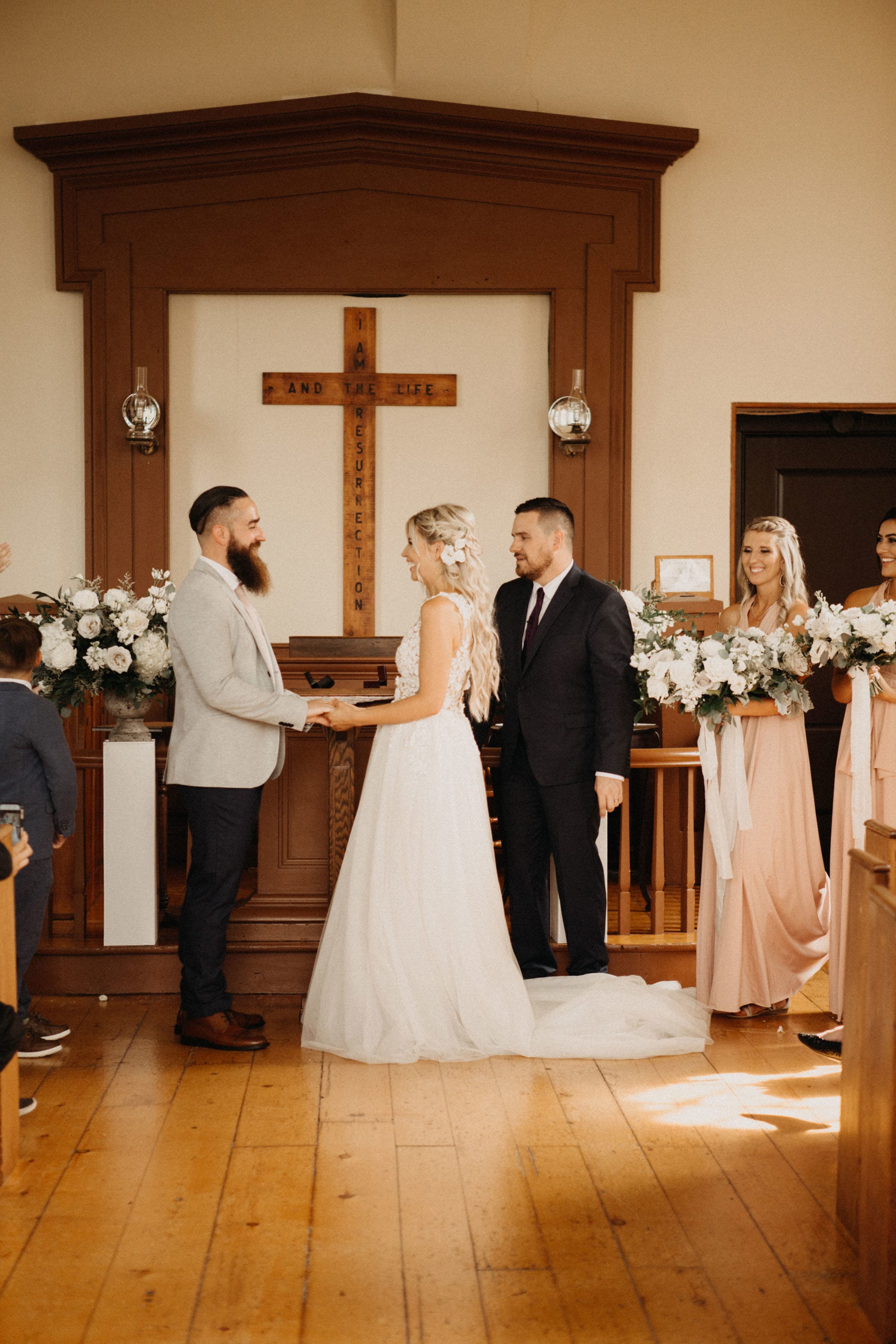 Before the reception, guests went for pontoon boat rides around the lake: 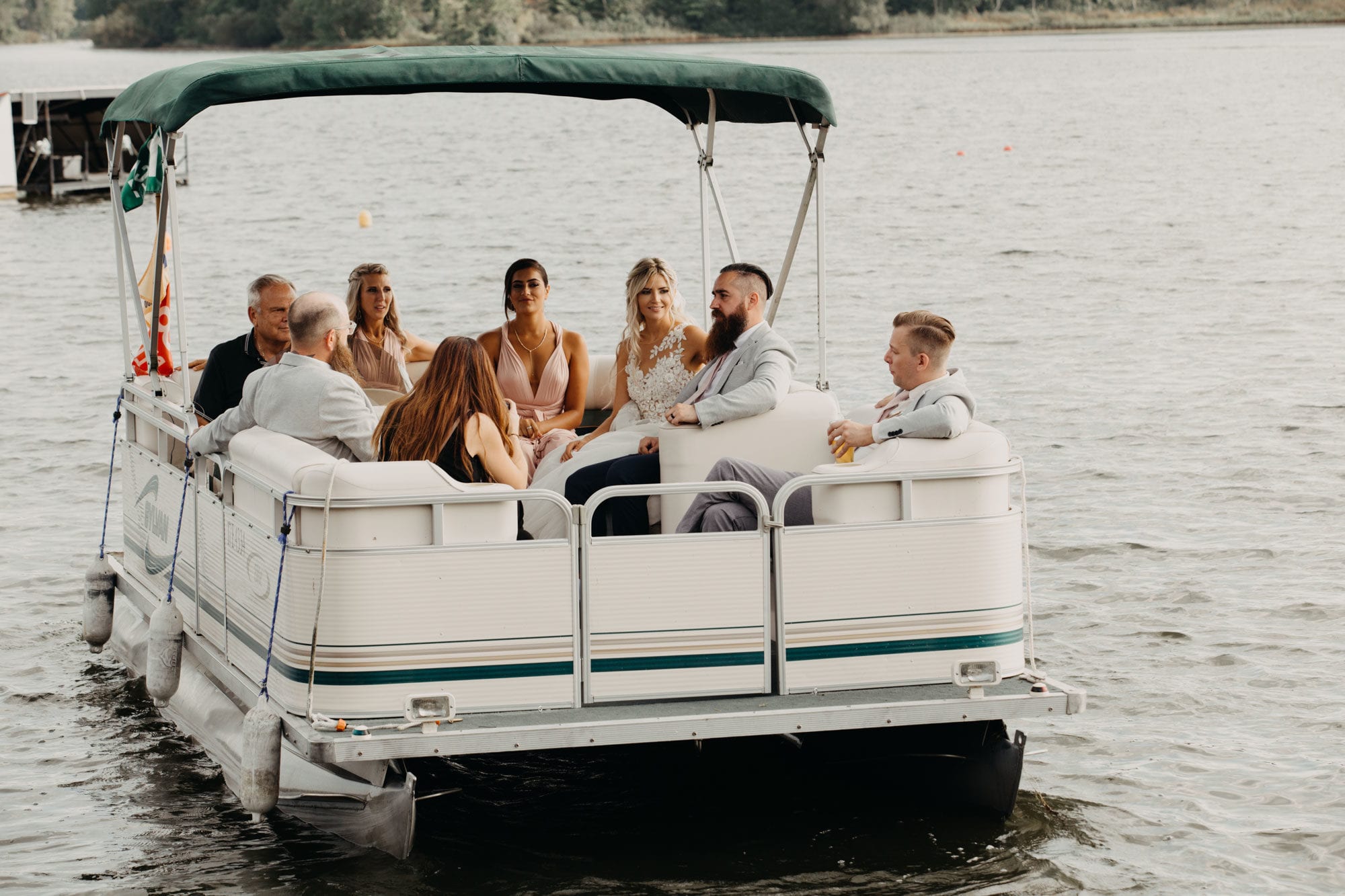 They opted for a funny cake: 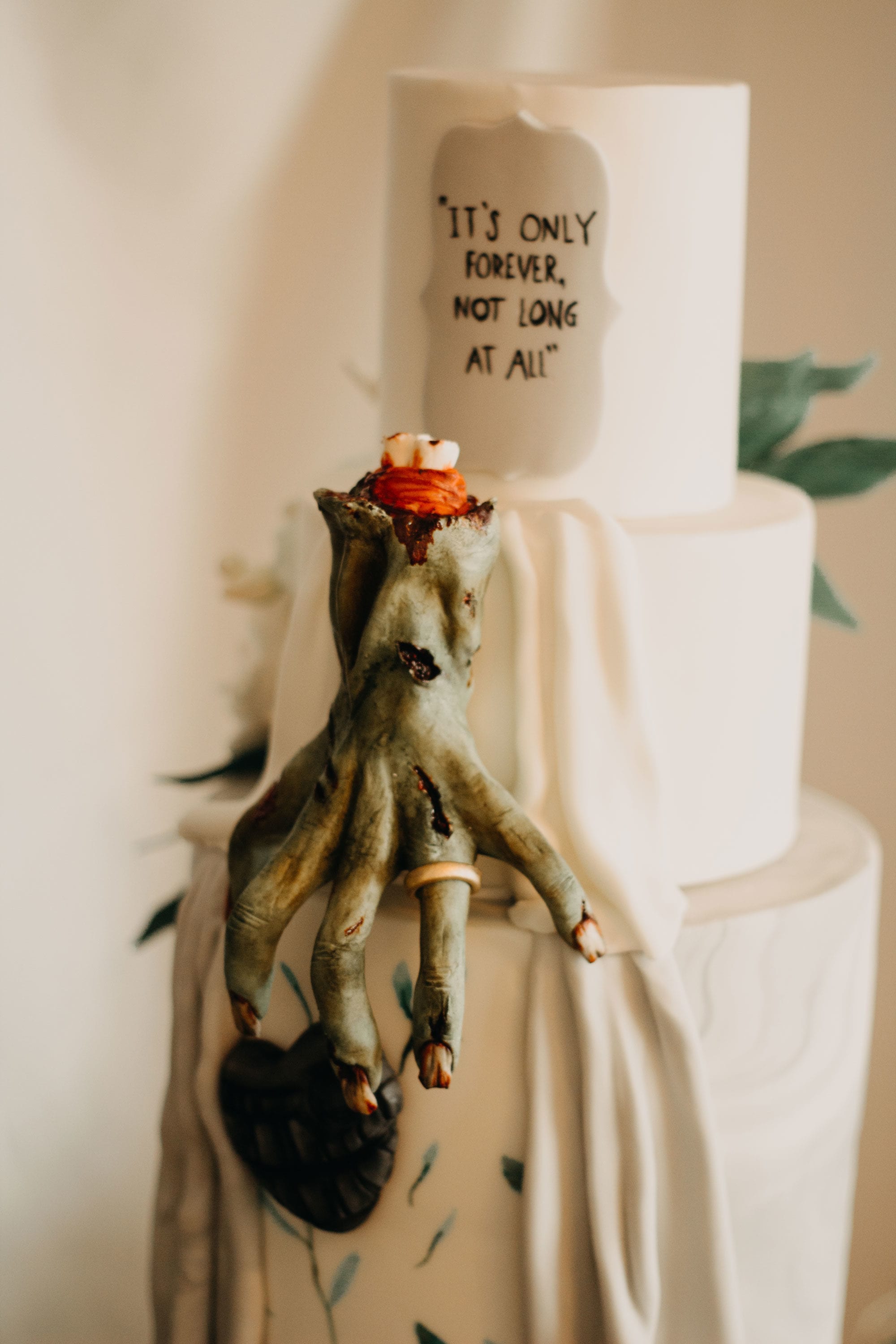 And a sword to cut it with: 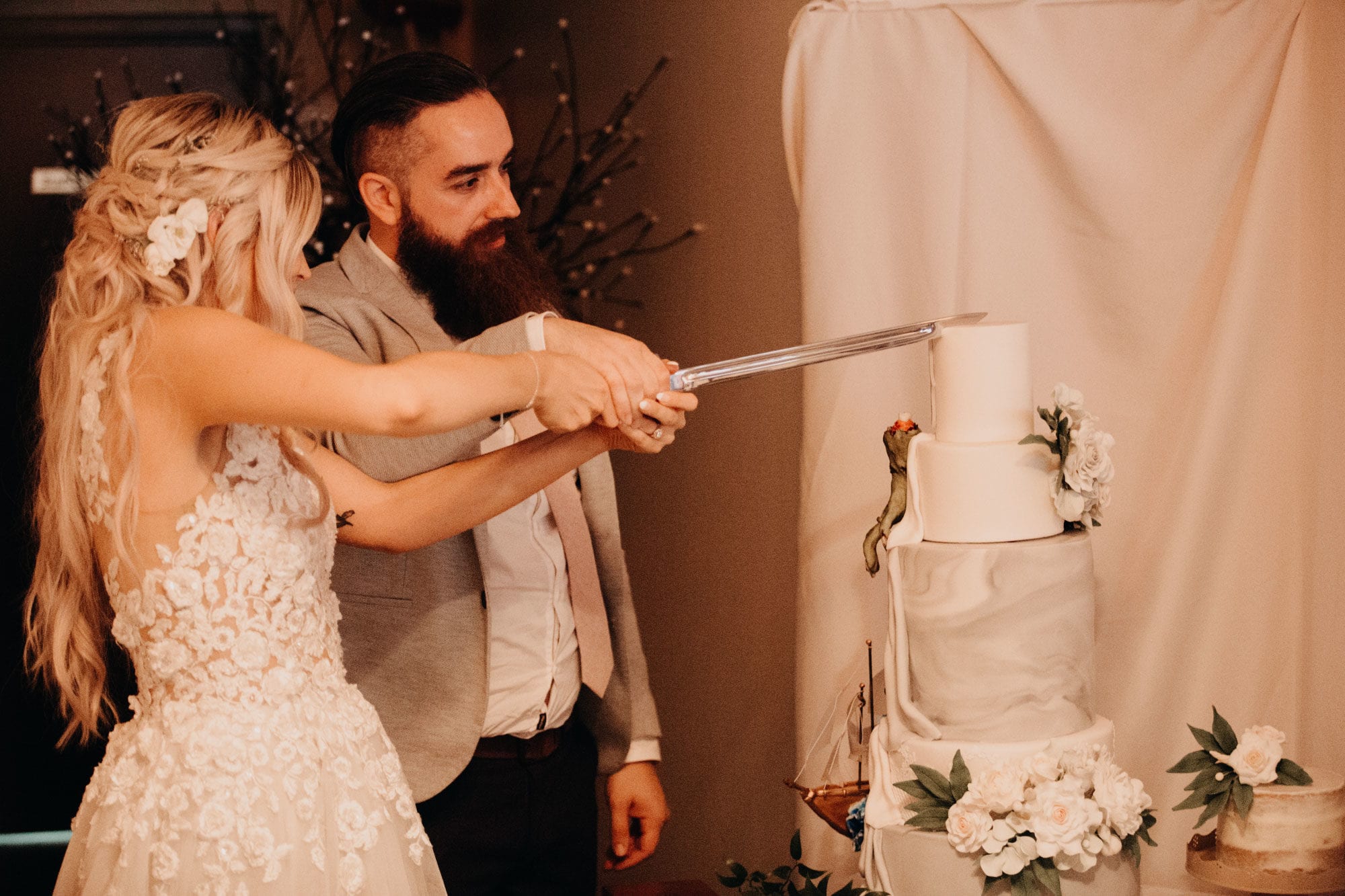 After dinner, Shane changed into a Star Wars suit and Sarah put on a tasselled party dress. They headed to their favourite local bar, Royal Electric, with family and friends who wanted to keep the party going: 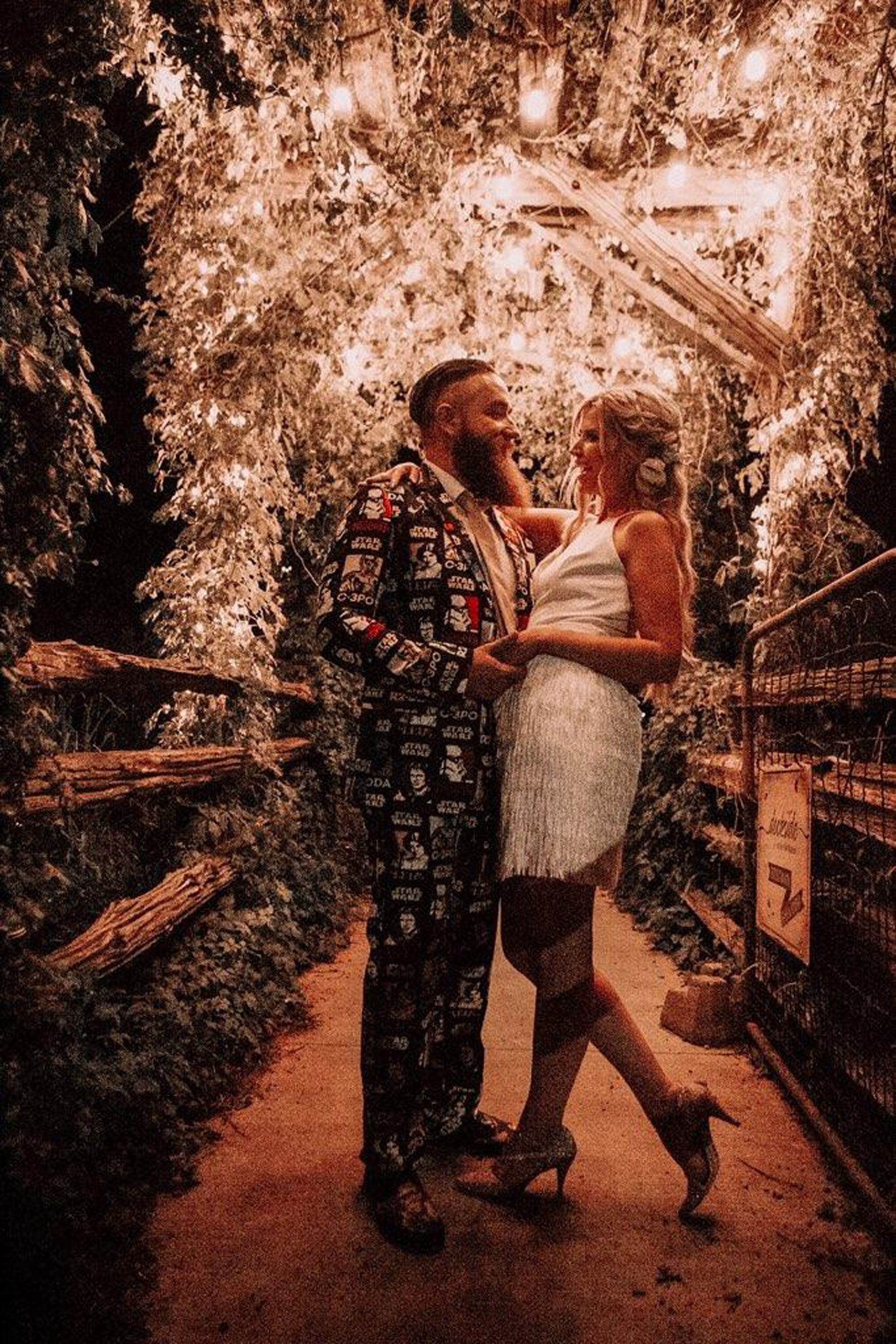