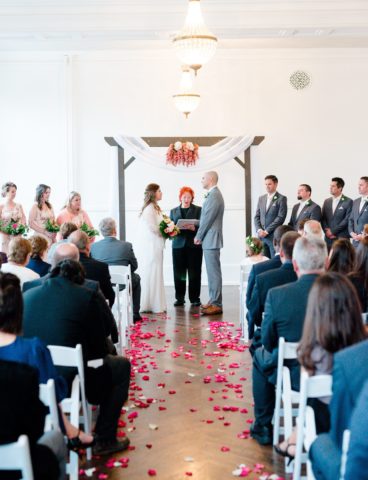 Inside a tropical bash at the Great Hall and Miss Thing’s, with cocktails served in coconuts and life-size cutouts of the bride and groom

Kelly Bokowski and Colin Shaw, both marketing managers, met on PlentyOfFish in 2012. They talked over the app for a few weeks before meeting up in person at Supermarket in Kensington, where they chatted—and threw back sangria—until the early hours of the morning. After they’d been dating for nearly four years, Colin planned to pop the question on a California road trip they took in the spring of 2016. But he drastically underestimated how long it would take to get a custom ring made. “I thought it could be done in a few weeks,” he says, “but apparently that’s not how it works.” He was forced to wait until the fall, when they escaped for a weekend to the JW Marriott in Muskoka. They were engaged within two hours of arriving. “I didn’t want to have my hands shaking during dinner,” says Colin. “I just wanted to tell her how much I loved her and have a great weekend together.”

They had dined at Miss Thing’s the year before, for a celebratory dinner when Kelly sold her condo. “They were setting up for a Caribana party, and I remember thinking that this would be an awesome place to have a wedding,” she says. They visited again and fell in love with the eclectic decor and fun, laid-back atmosphere. “It really felt like us,” she says. The restaurant was stoked about the celebration, and worked with the couple on all elements—a major bonus, since they didn’t recruit a planner. Miss Thing’s even recommended they hold their ceremony at the Great Hall down the road to take advantage of the natural light (something Miss Thing’s is lacking).

Though Kelly aren’t Colin aren’t what they call “theme people,” the venue dictated a distinctly tropical vibe. Florals were accented with ferns and palm fronds, and the restaurant served Hawaiian dishes (like steamed sea bass wrapped in banana leaf), and elaborate custom cocktails in coconuts. “We knew people would remember a good party and a good meal,” says Colin. 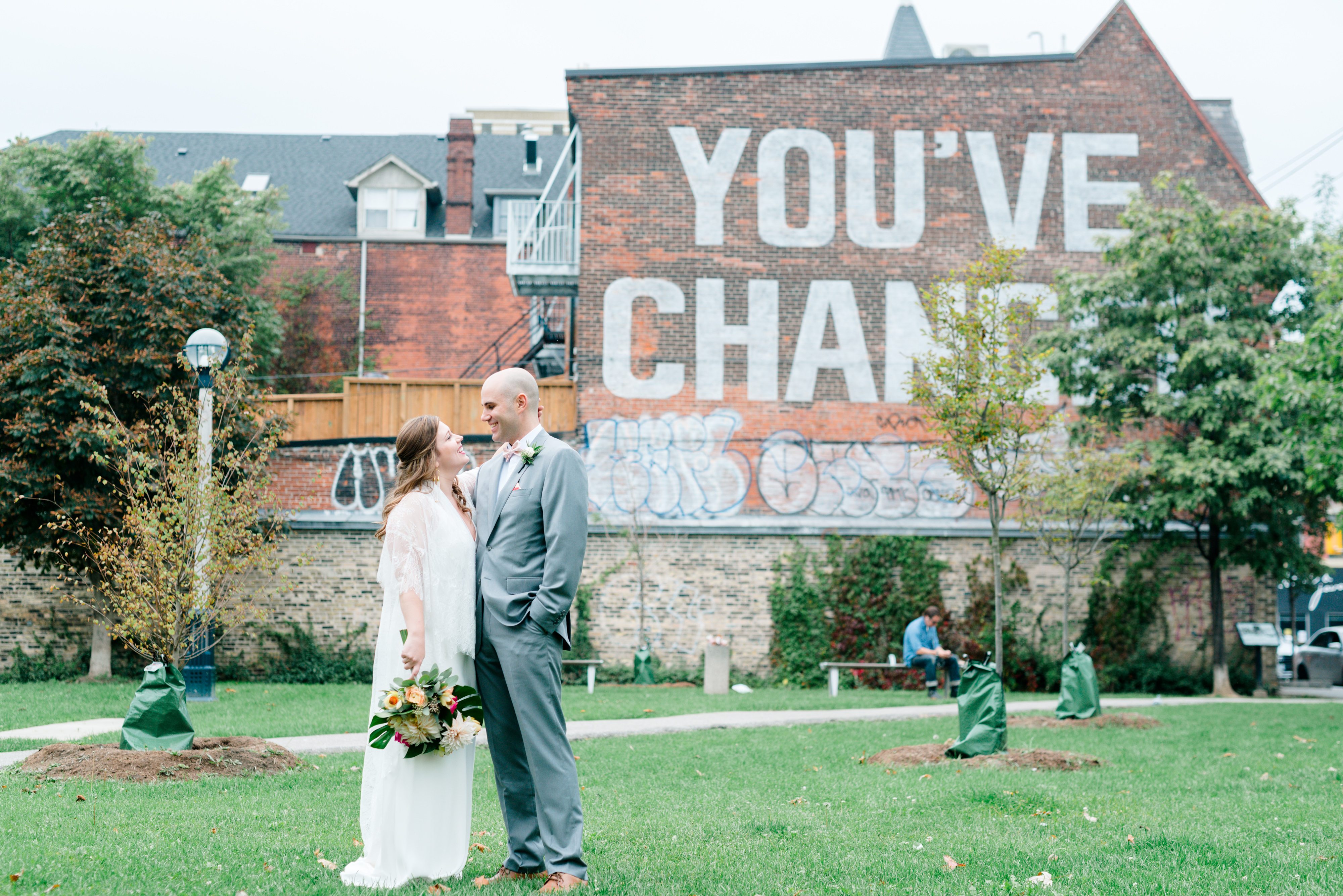 Kelly’s day started in the east end, at Lone and Co., where she and her bridesmaids got their hair done. Kelly had initially struggled to find a dress.  She then read in a Weddingbells newsletter that one of her favourite brands, Grace Loves Lace, was coming to Toronto for a trunk show, which just so happened to be at The Great Hall. “It worked out perfectly,” she says. “It was so funny that I was trying on the dresses in my venue”: 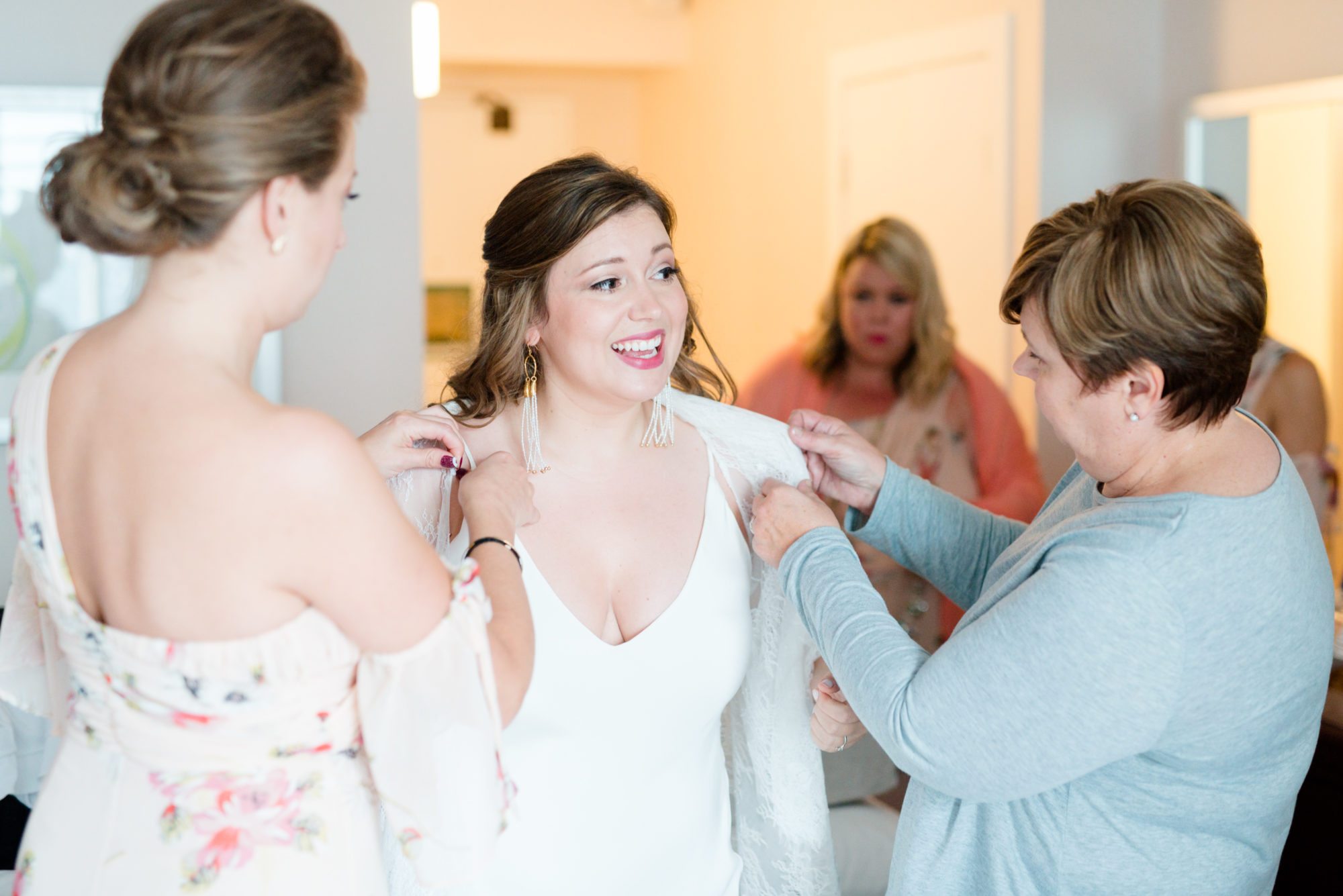 Colin had lunch with his groomsmen and assembled a custom archway built by Kelly’s father for the ceremony at the Great Hall. The couple met around 3 p.m. at the Chelsea Hotel for a first look. Kelly loved her dress’s delicate lace cape. “It was very Carolyn Bessette,” she says: 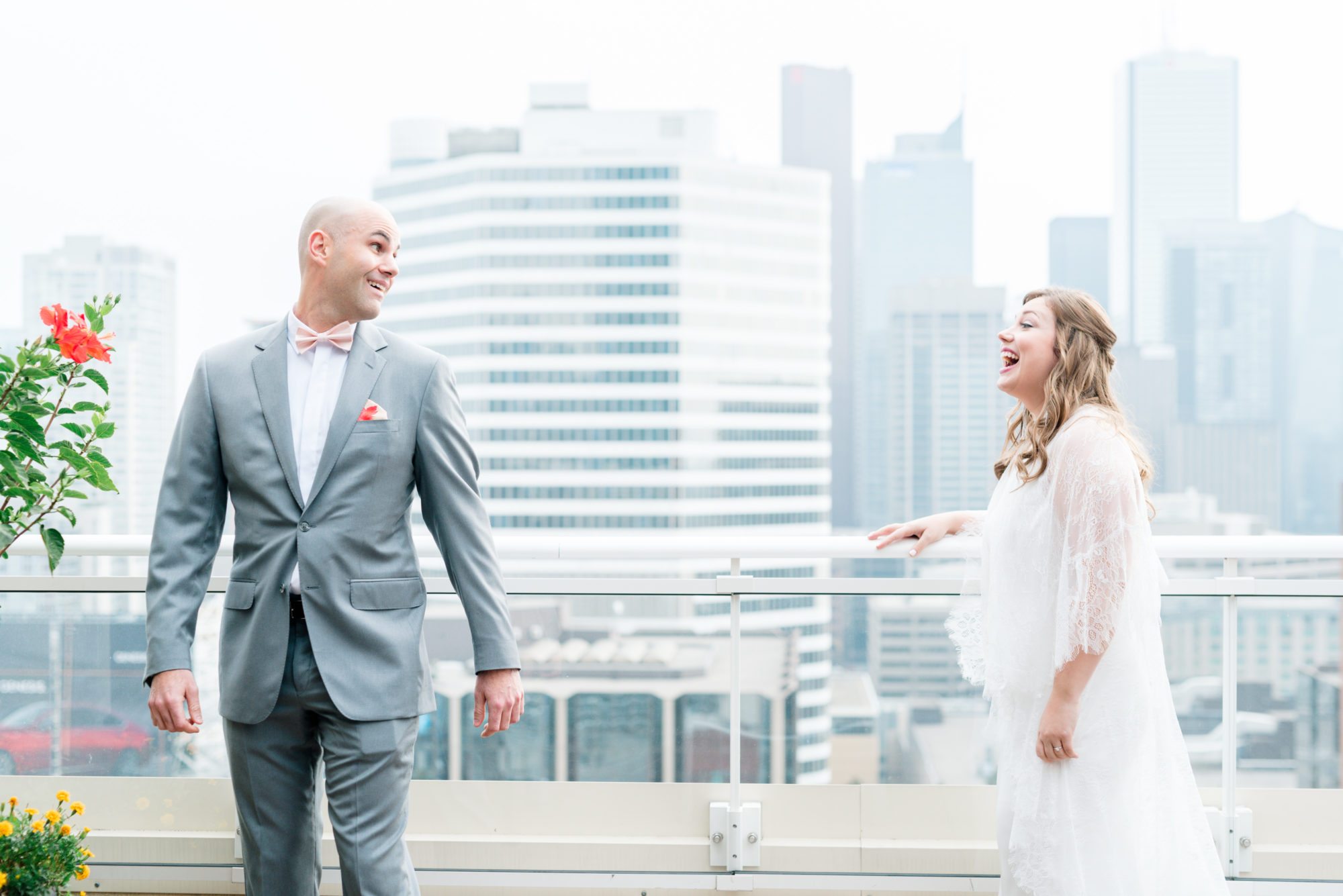 Kelly’s bridesmaids wore floral dresses from Asos’ bridal line, and their bouquets were a mix of roses, dahlias, eucalyptus and monstera leaves: 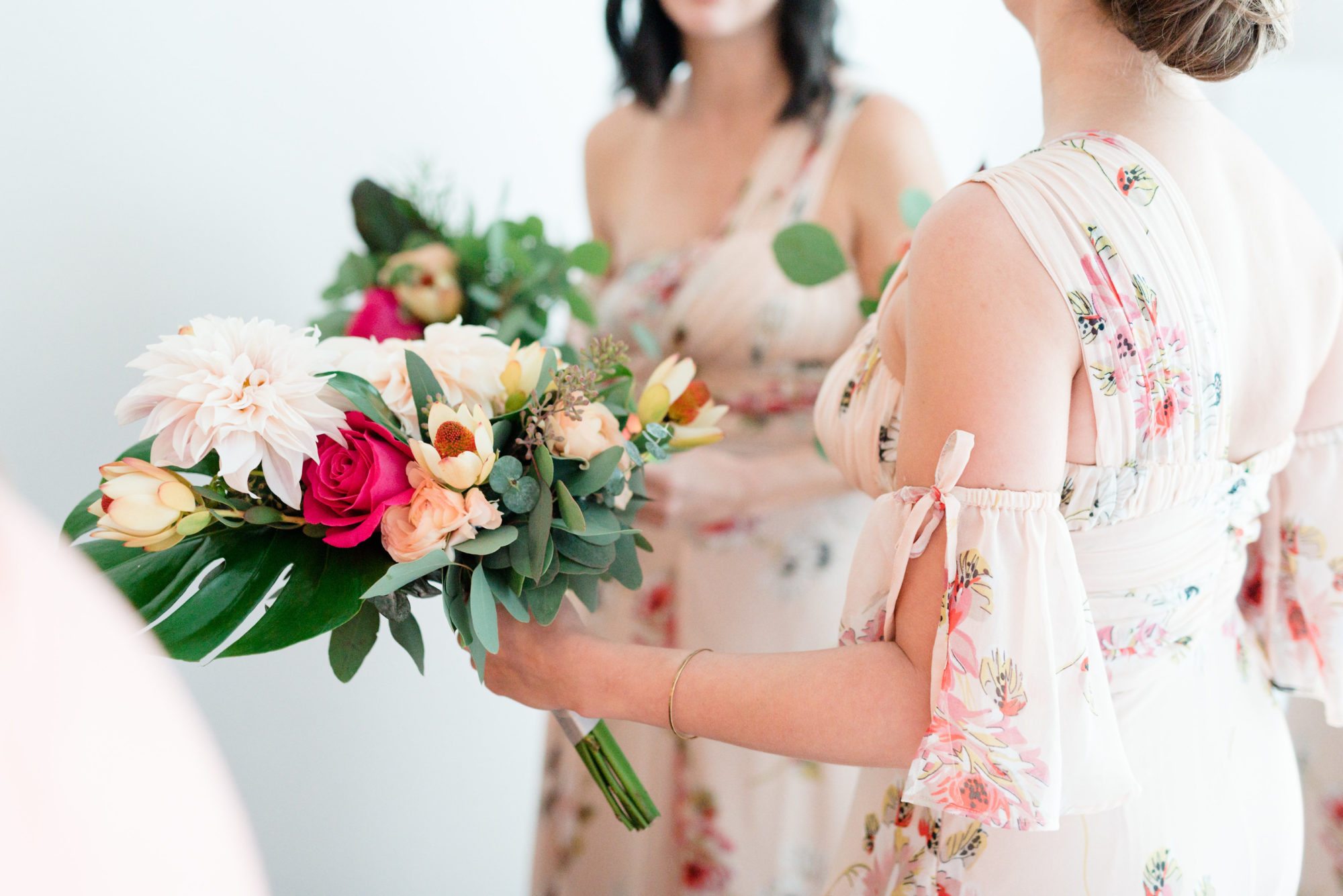 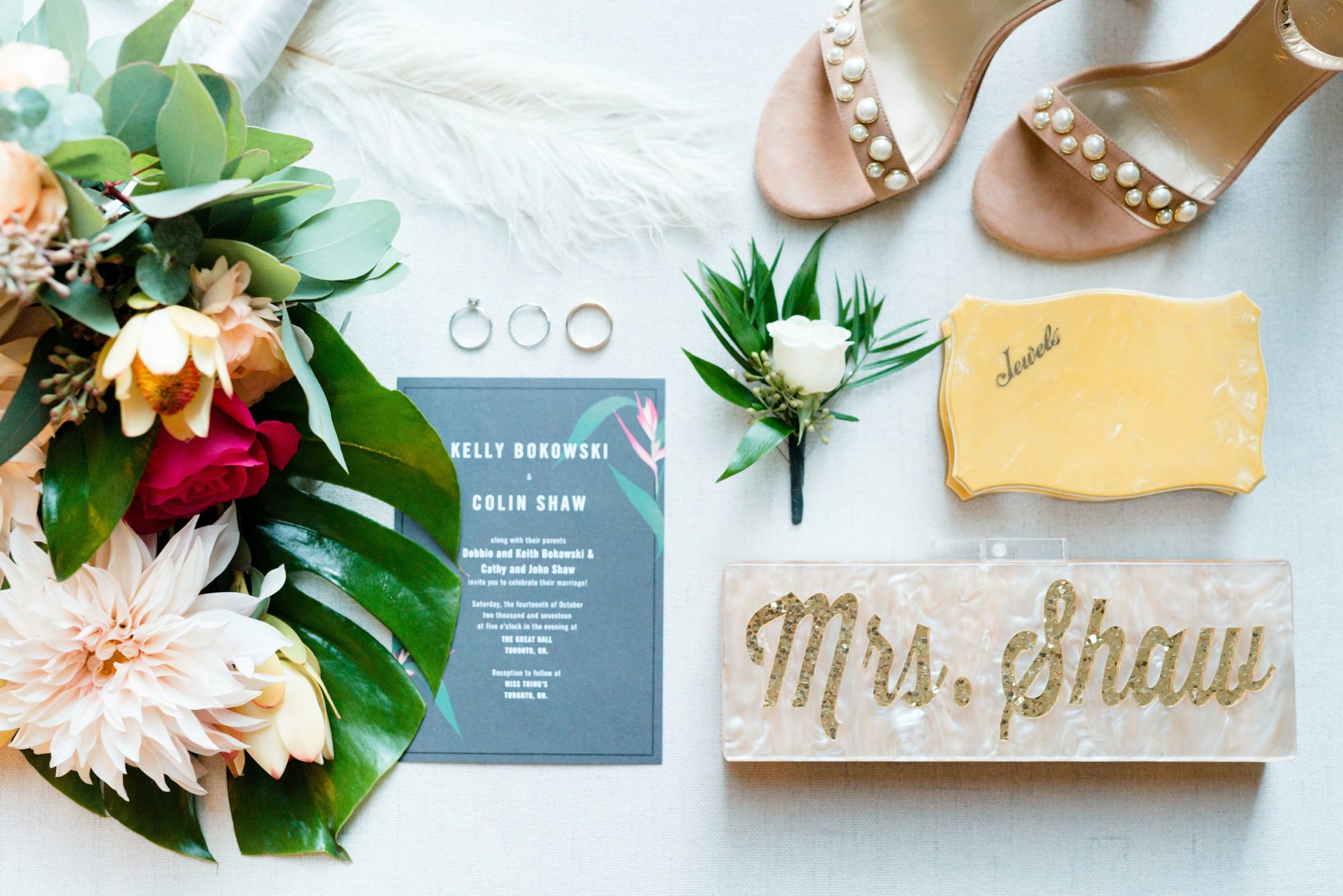 She gave some of her family members rather cheeky hankies (they say: “Keep your shit together”): 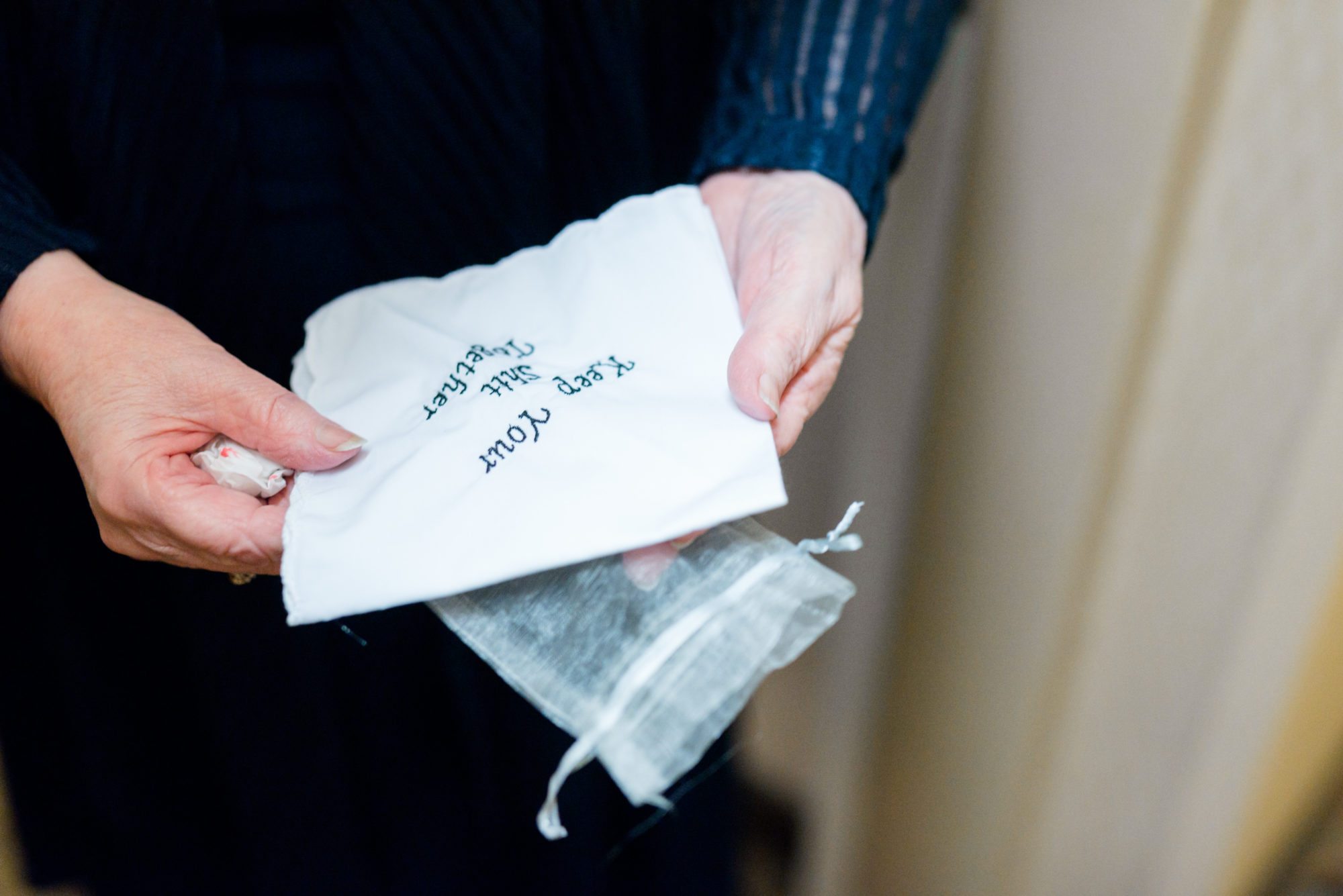 Kelly’s dad made the archway out of spruce, while her mother adorned it with flowers and fabric. “It fit the aesthetic of the Great Hall so well,” says Kelly. They had a non-denominational ceremony: 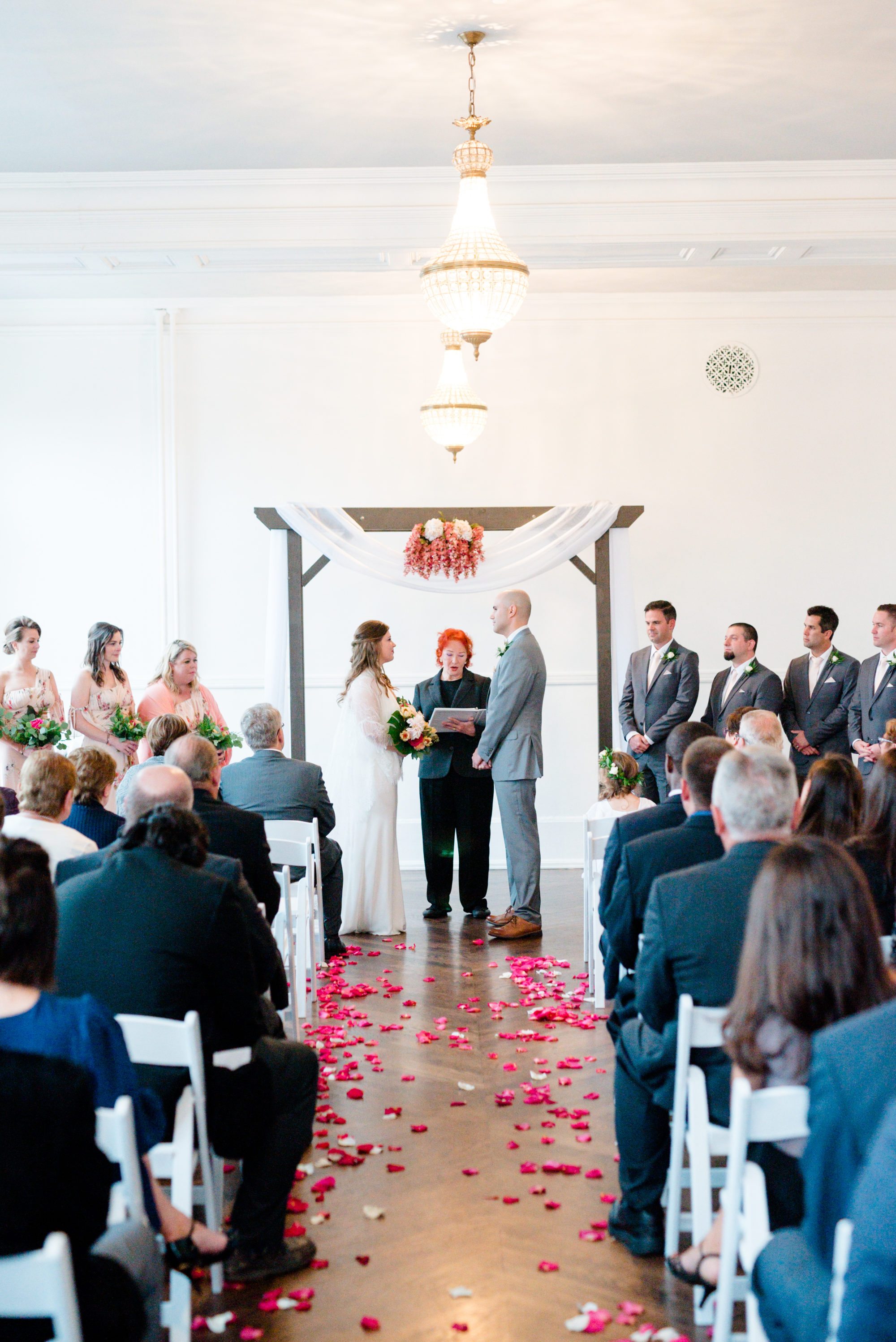 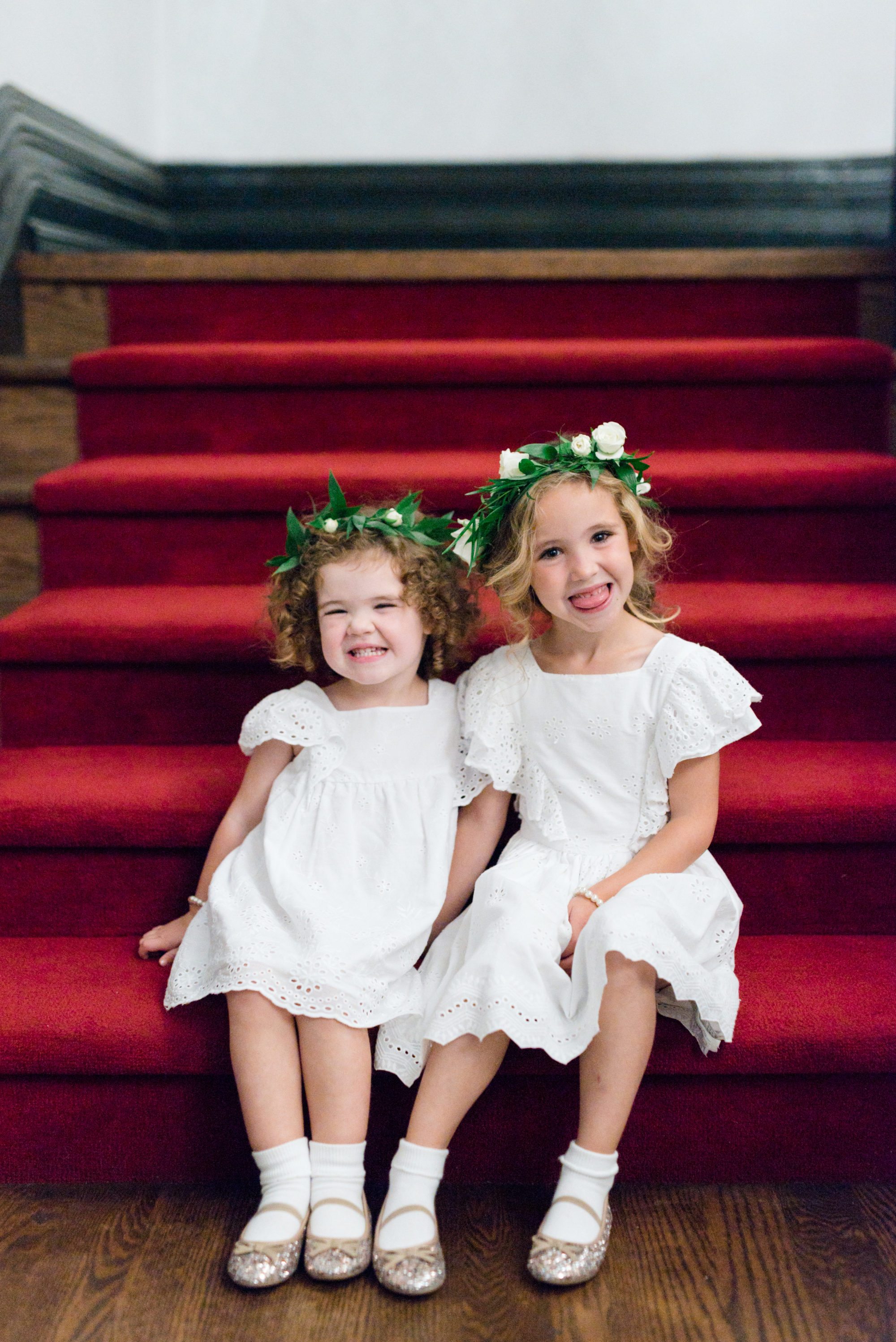 After the ceremony, the couple wandered around the venue taking photos. An evening gig cancelled last-minute, so they had the building to themselves, which made for some great photo ops: 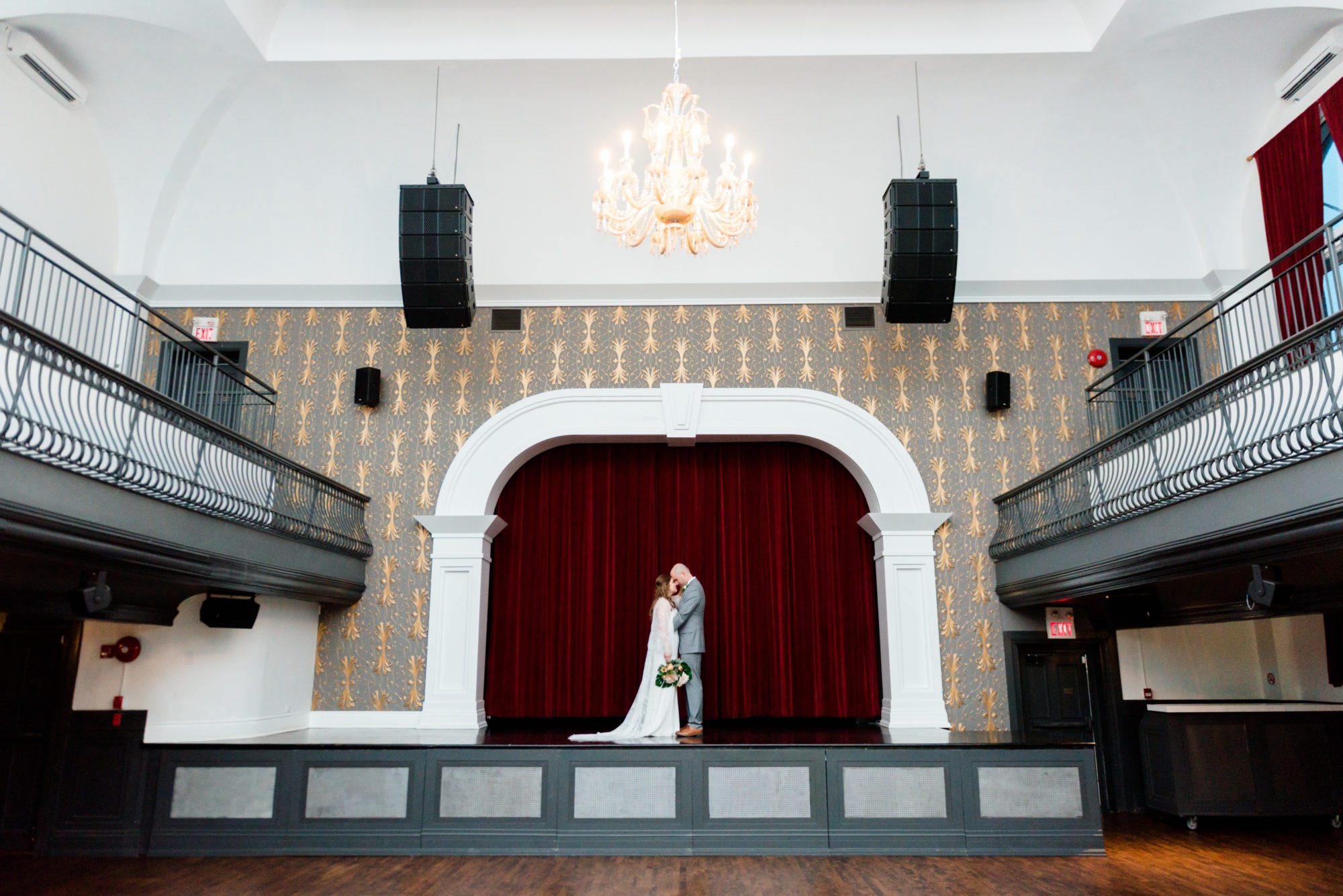 Over at Miss Thing’s, the tables were named after meaningful places and experiences, from a favourite Thai restaurant to cities they’ve visited. “The sign that says ‘Table Fucking Ten’ is an inside joke with Colin’s cousins,” says Kelly: 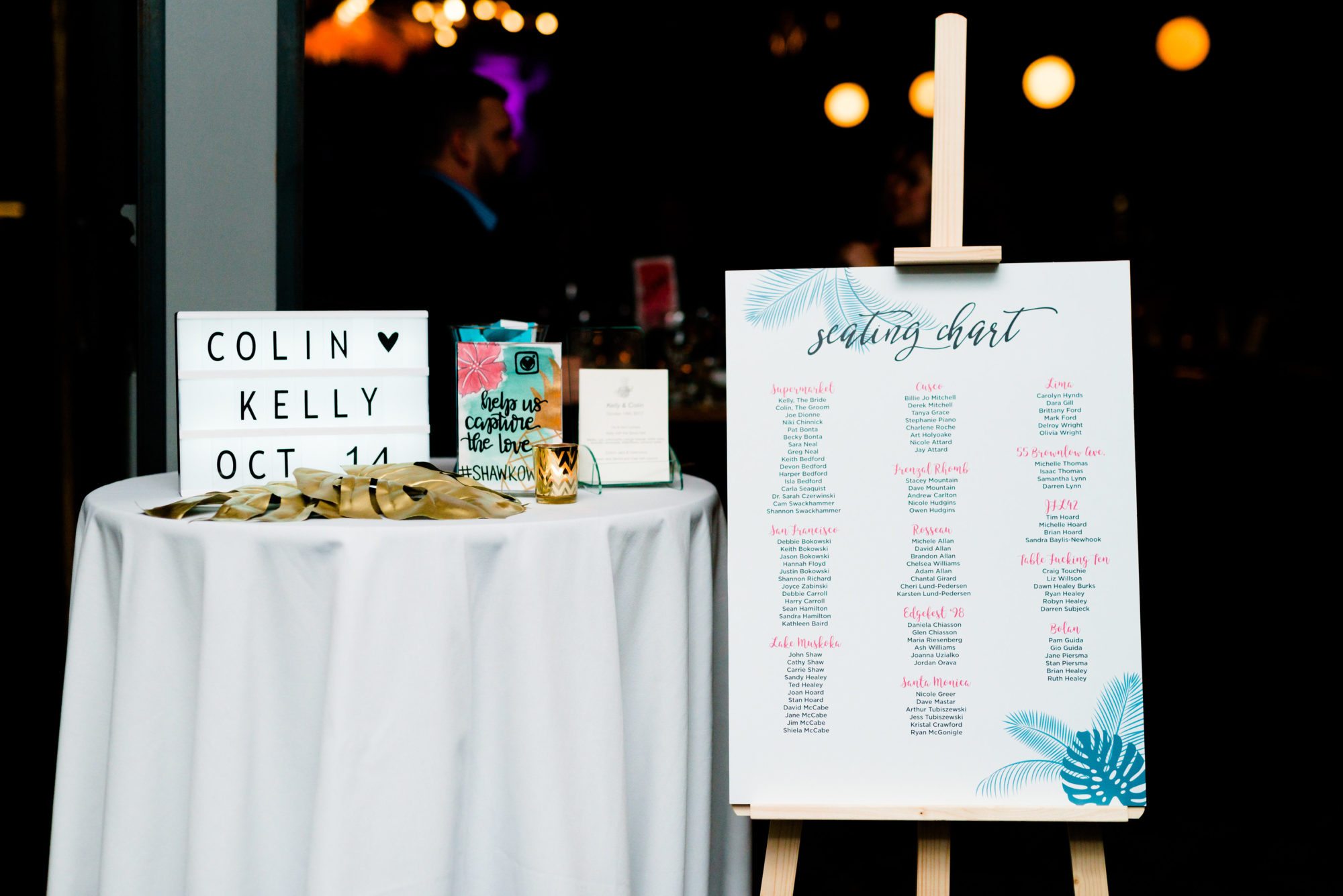 Most of the decor was DIY. For instance, Kelly found this ice bucket at a vintage shop and spray-painted it teal: 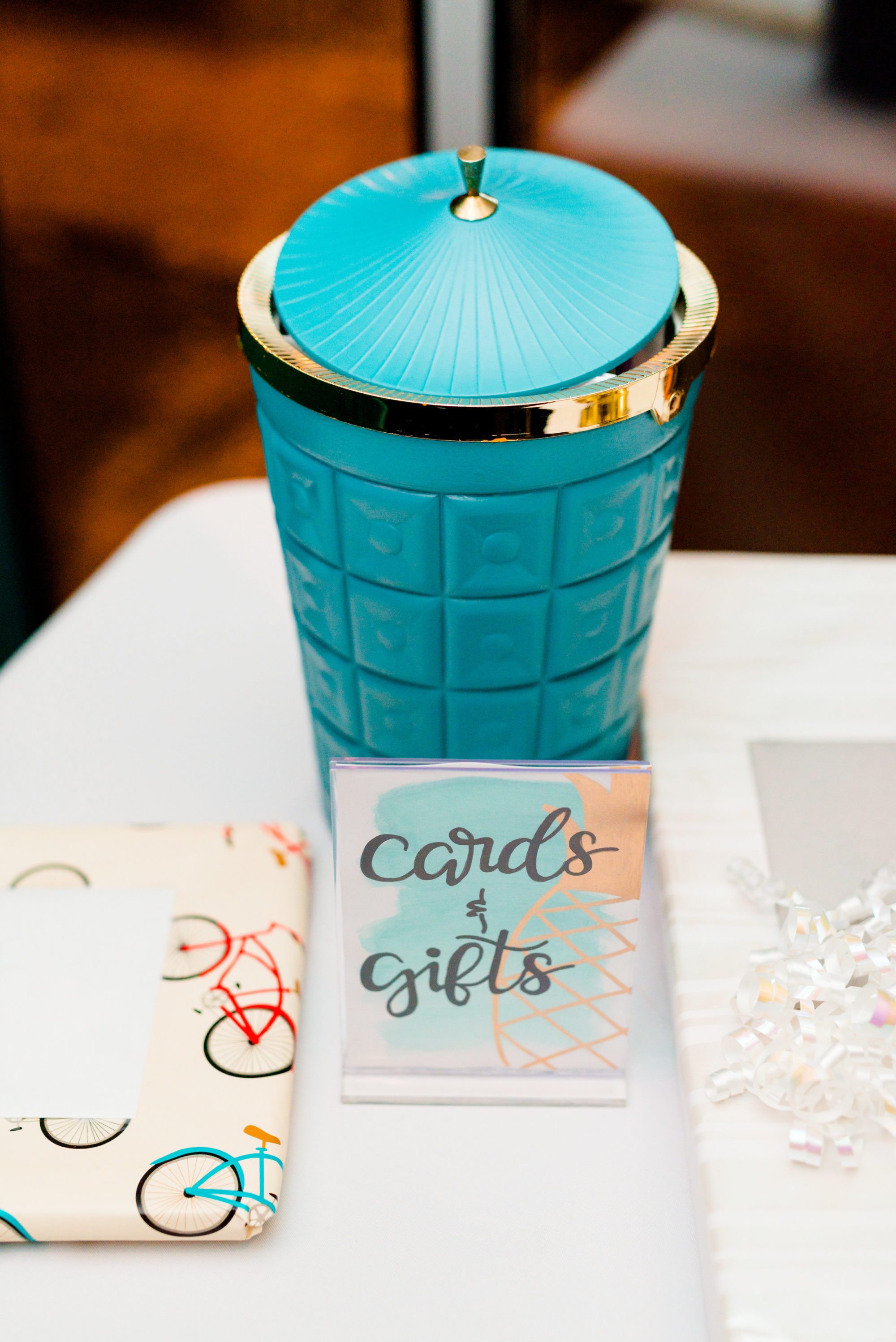 Their custom cocktails were a big hit. Kelly With the Good Hair was a boozy lavender and elderflower lemonade, and Colin’s Jack-and-Coke-o-Nut” (pictured here) was garnished with a giant Coca-Cola gummy: 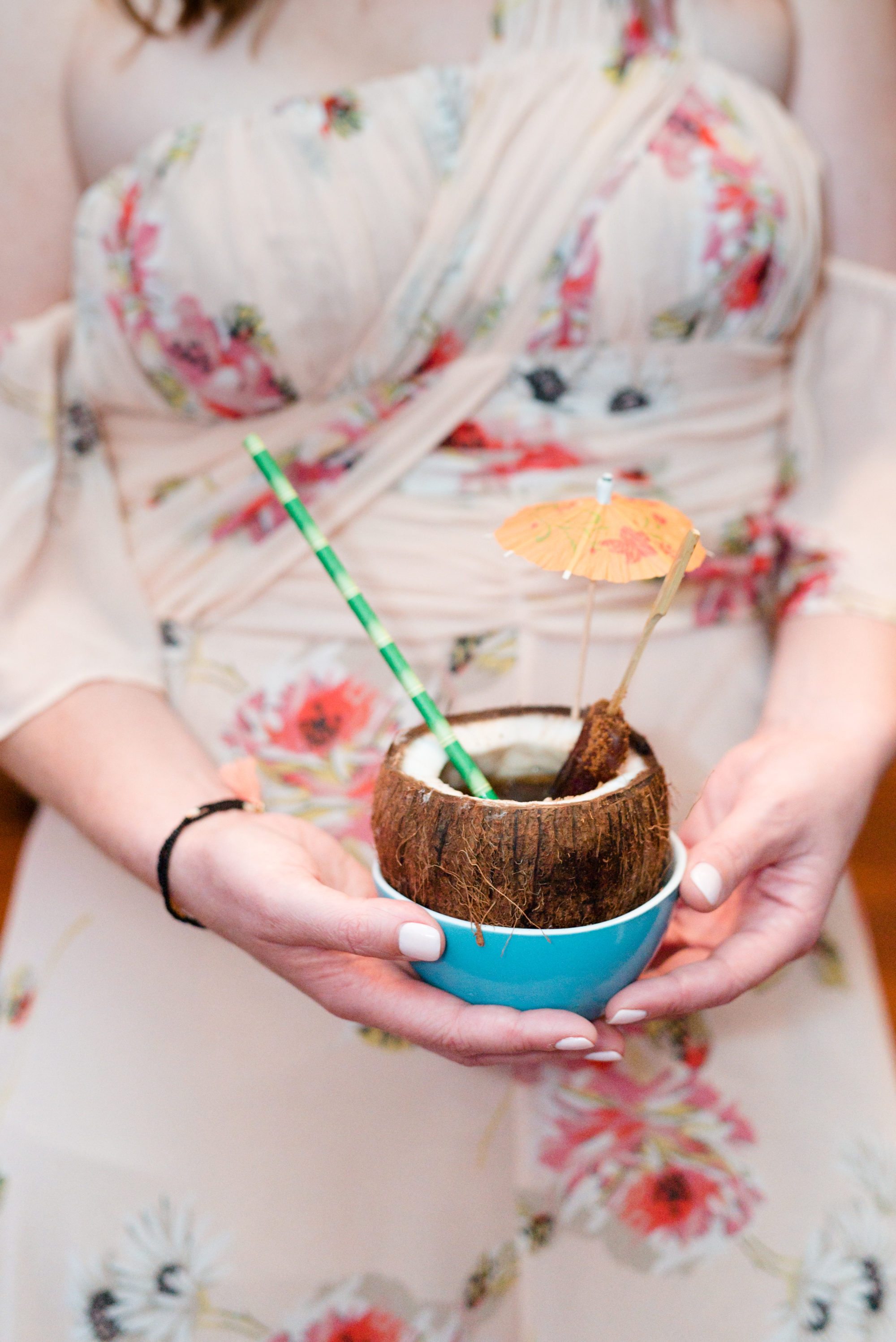 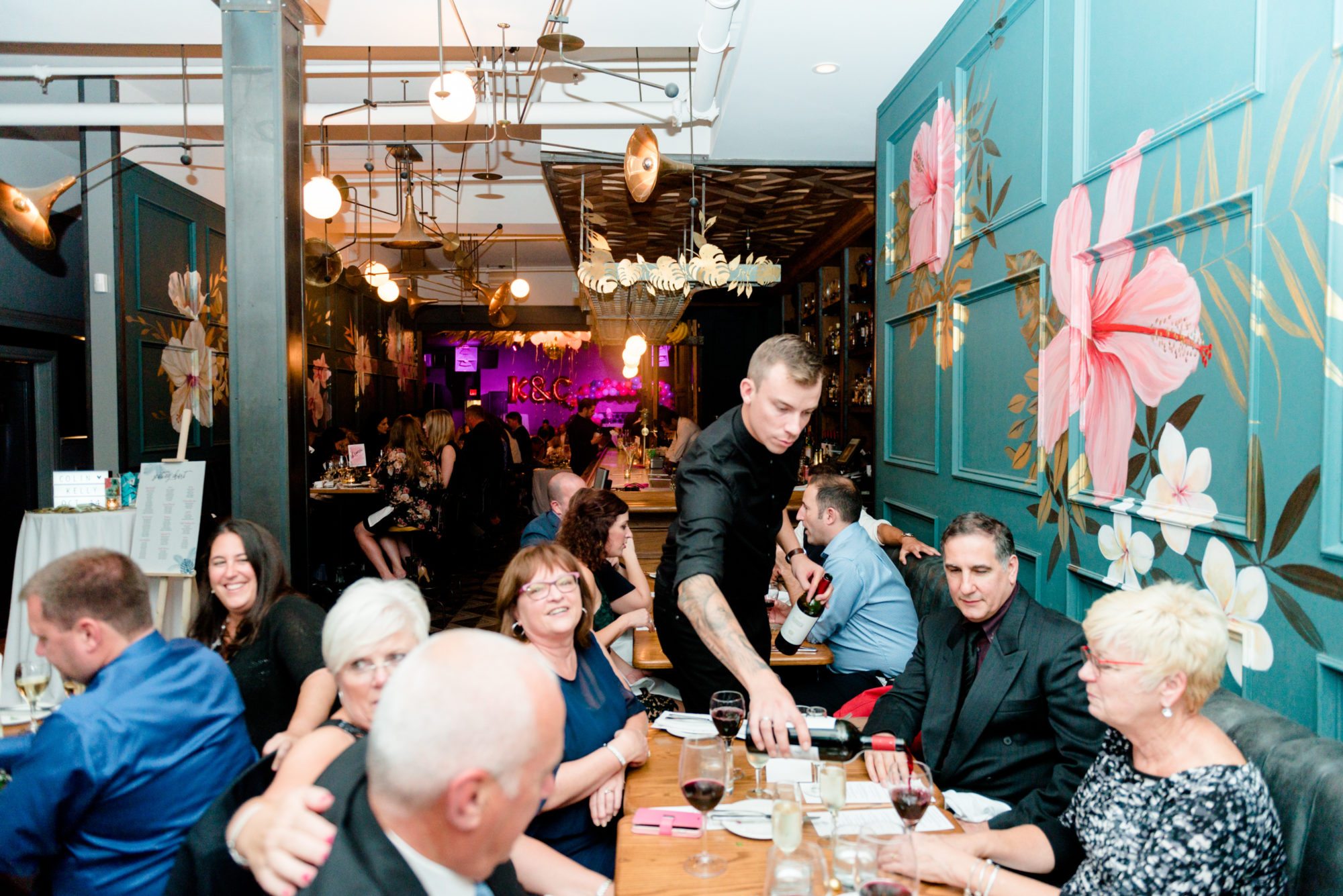 The couple had their first dance underneath a disco ball they decorated in gilded palm leaves and was to “500 Miles” by Sleeping at Last. “It had everyone in tears,” says Kelly: 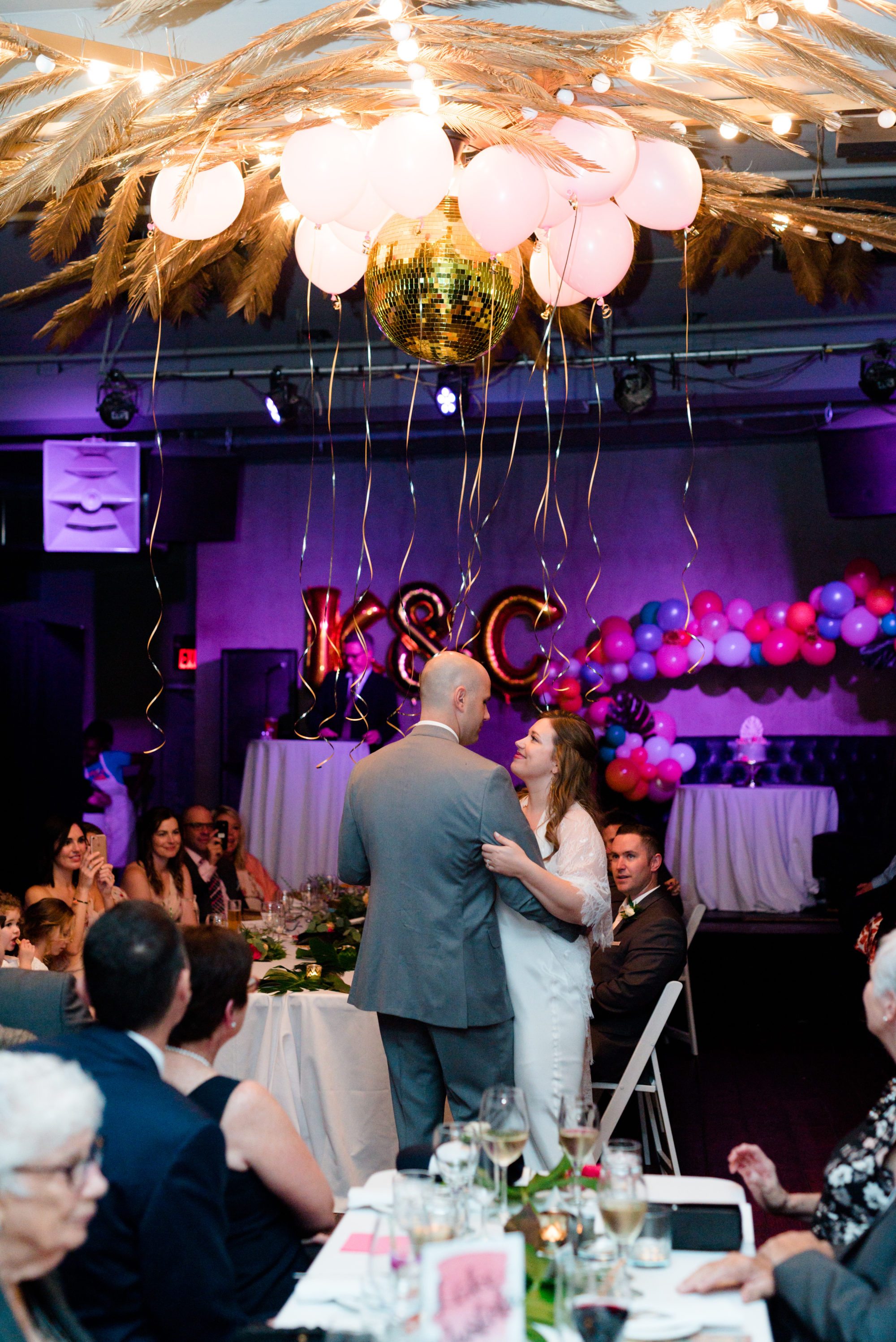 The vanilla-bean cake was made by the Purple Cupcake, a brand Kelly had followed on Instagram for a while: 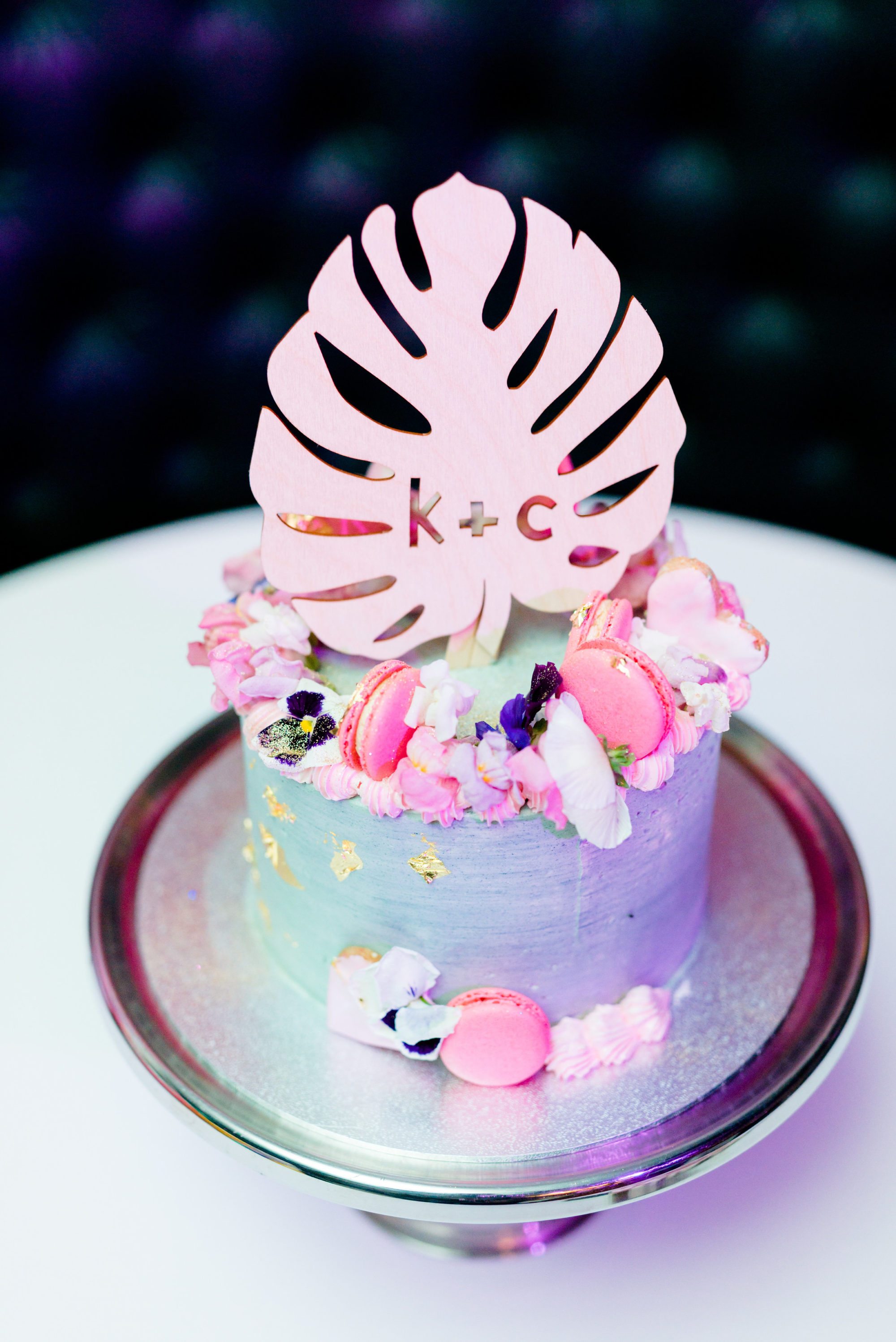 The men’s bathroom was filled with decals of Kelly, and the women’s had pictures of Colin. They were his idea. He’d seen similar ones in an airport while he was backpacking in his 20s and had been waiting for an opportunity to make people chuckle. “Even the grannies and aunties had a good laugh,” says Kelly: 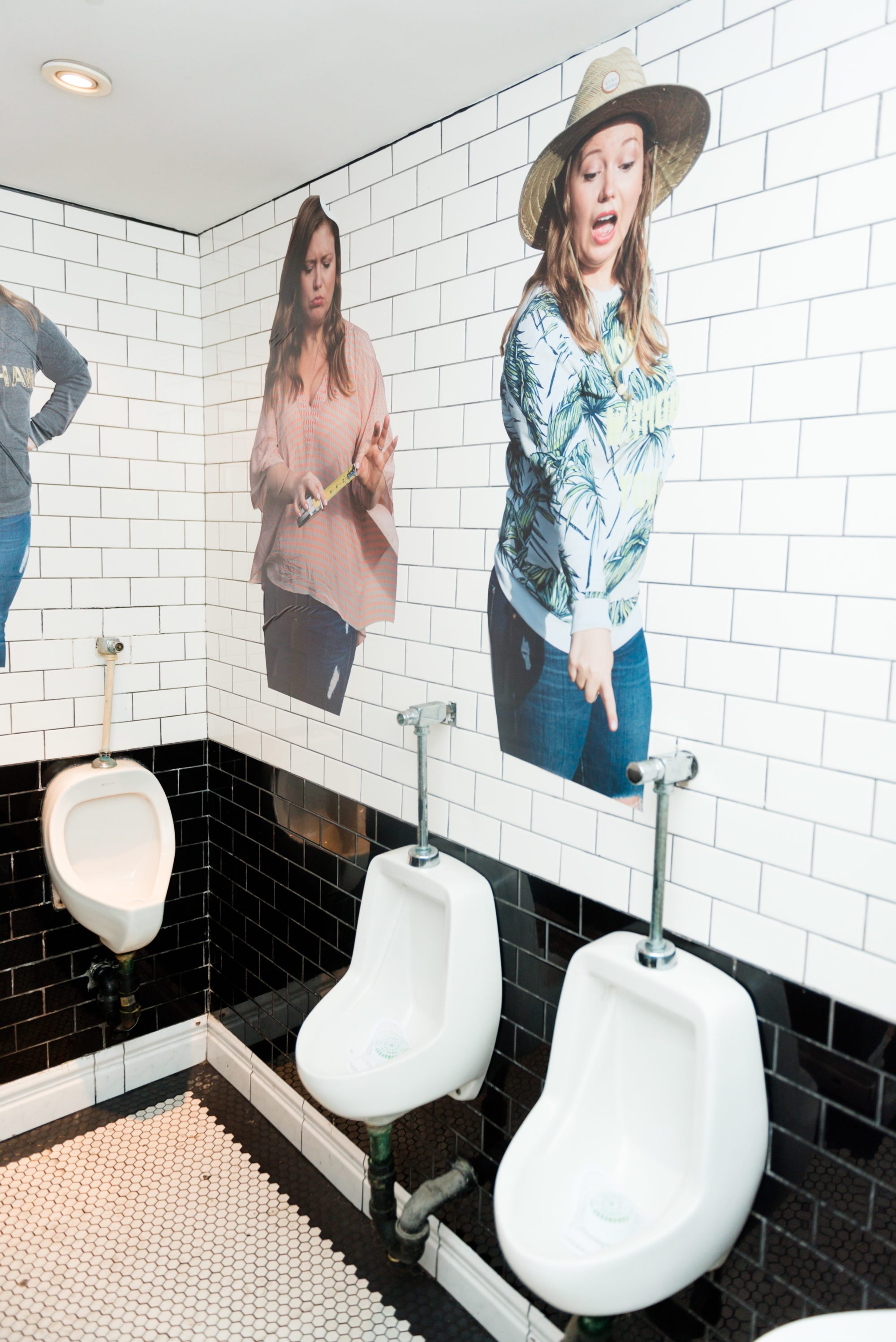 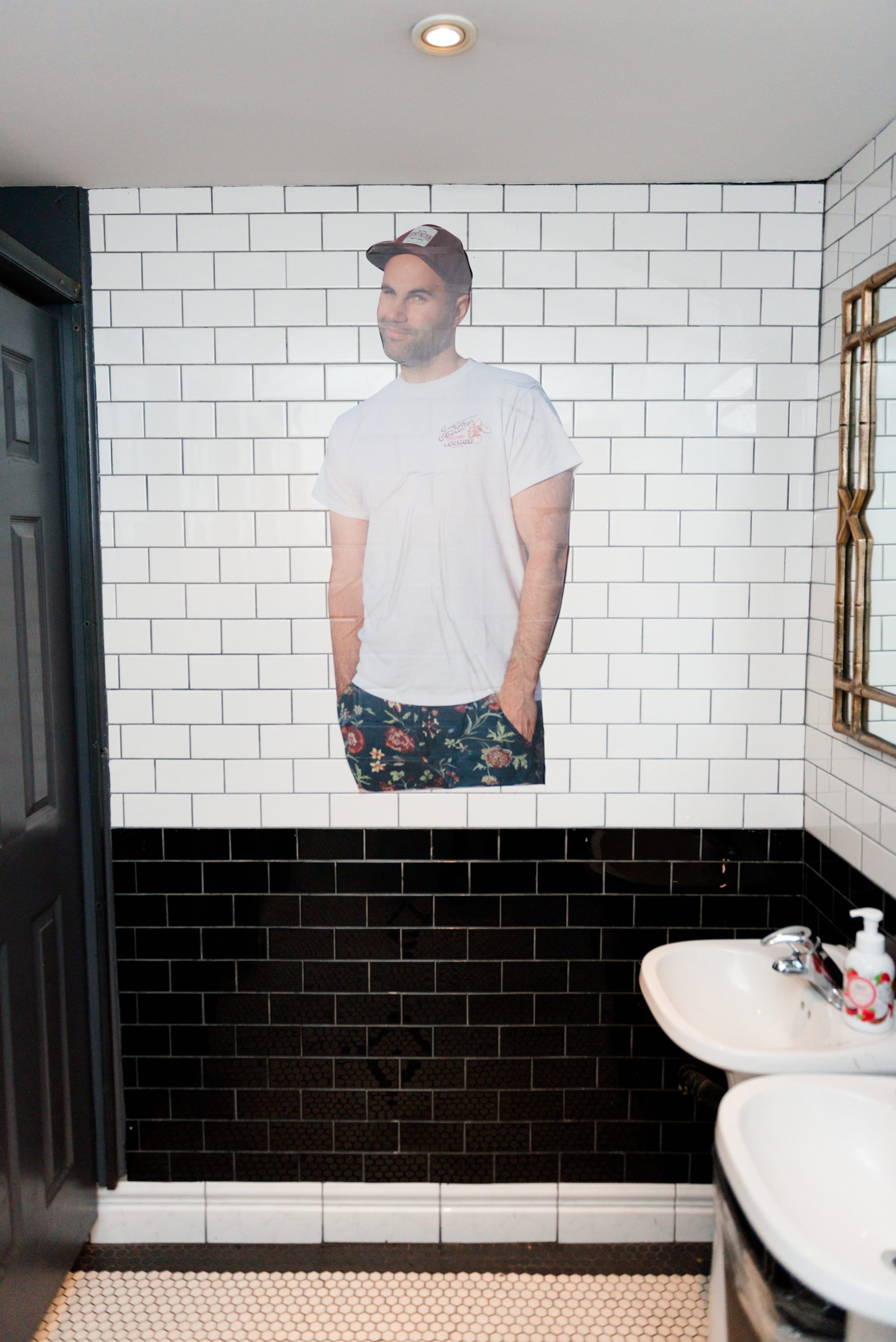 The dance party lasted until 1:30 a.m. “We ghosted just before the end,” says Kelly. 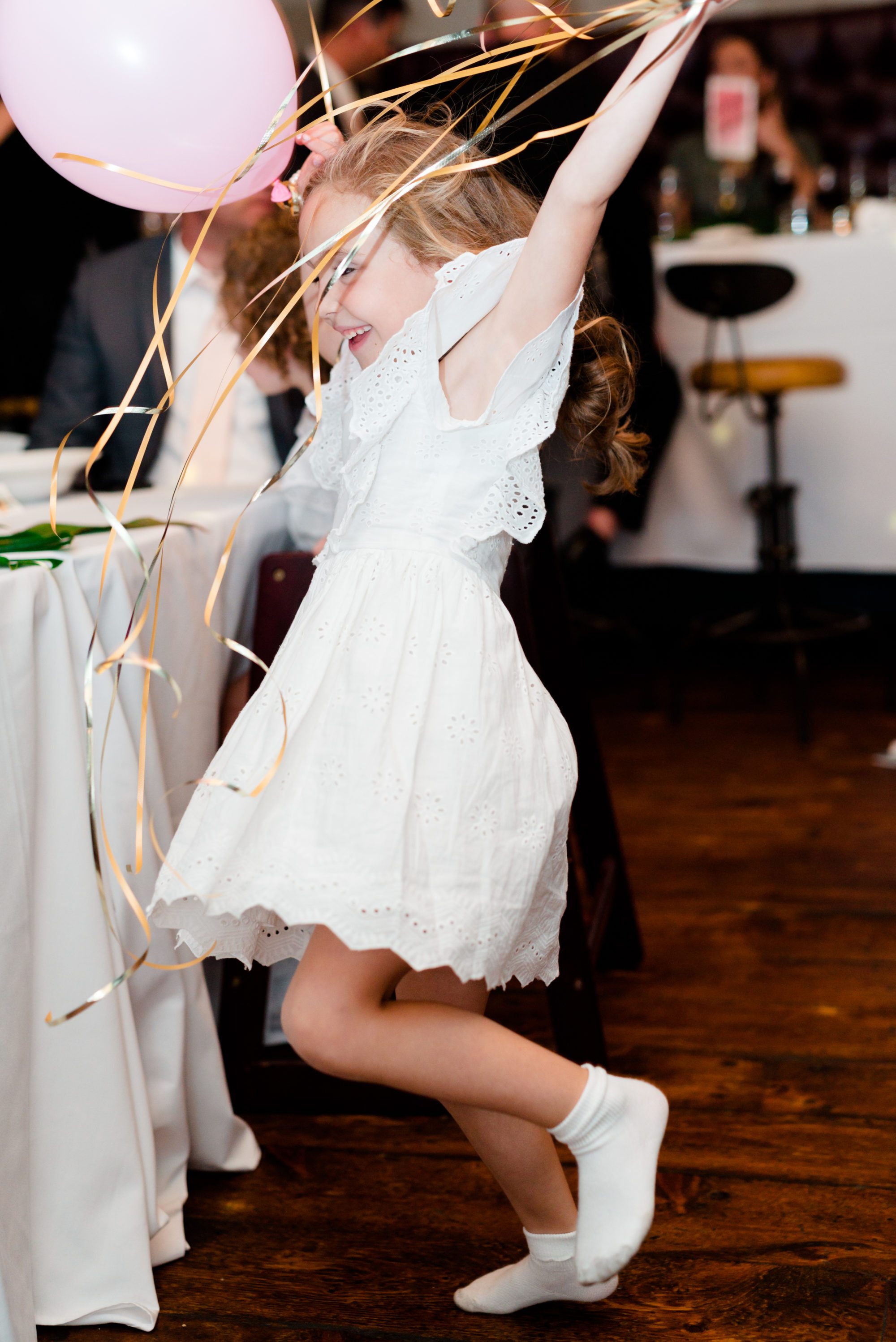 Guests took home custom matchboxes from Etsy as favours. A month after the wedding, the couple went to Hawaii for their honeymoon. “Everyone thought we were taking the theme to the extreme, but it was booked before anything else in the wedding!” says Kelly. 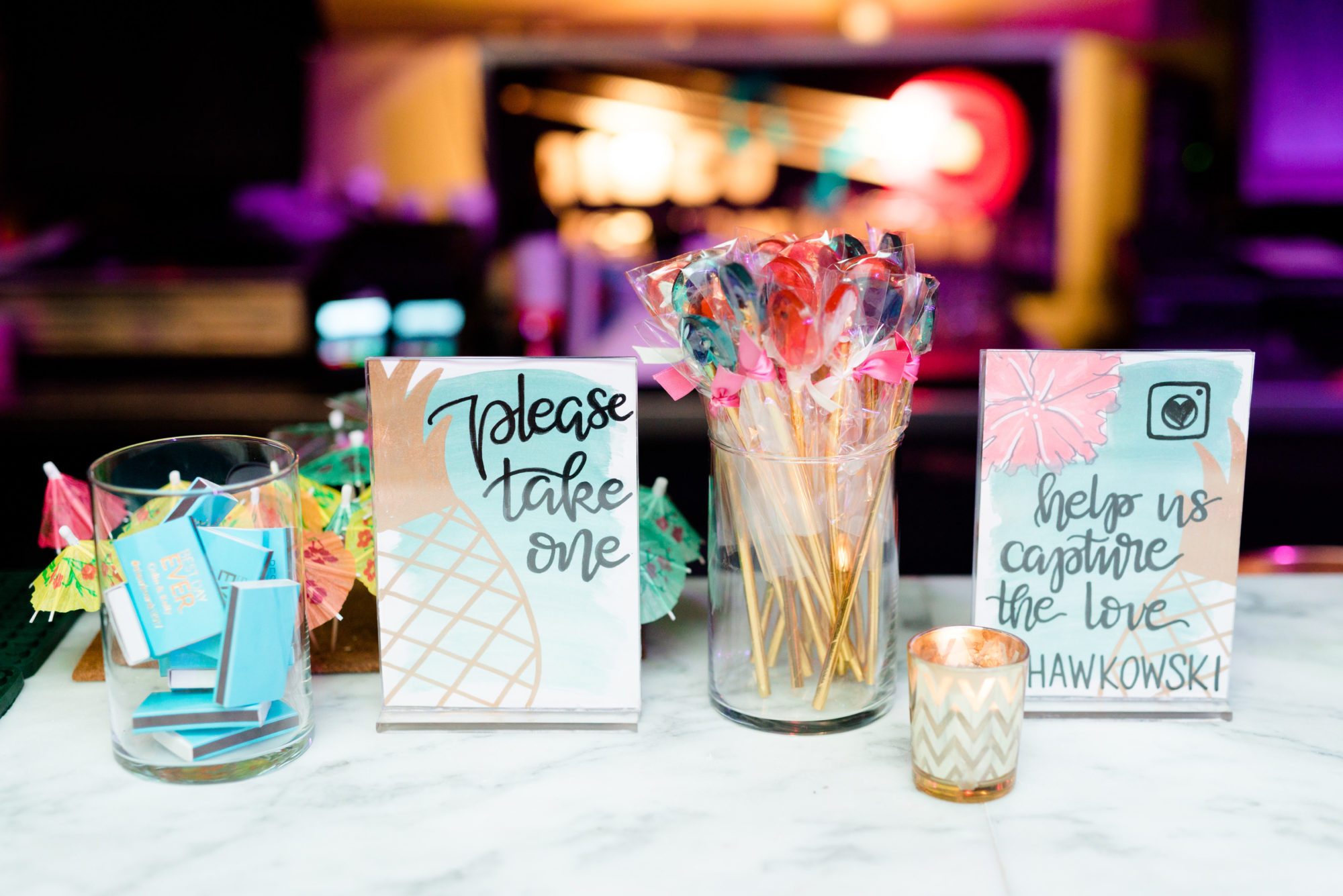