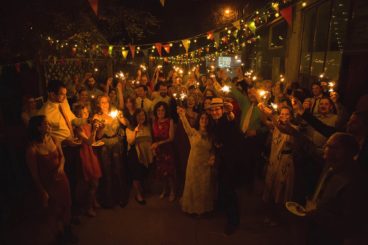 Inside an eclectic boho ceremony in a Parkdale laneway and loft, with a Grand Electric food truck and tarot readings

Amber Joliat and Nik Timar have run in the same art-world circle for 15 years; Timar is a musician and producer, and Joliat runs Misfitstudio, a rock ’n’ roll pilates and movement studio with two locations in the west end. They were always friends, but it wasn’t until four years ago that they started dating. They were seated next to each other at Electric Mud, the barbecue restaurant in Parkdale, and noticed new electricity sparking between them. That night, he asked her to hang out. For their first date, he sent her a map of Trinity Bellwoods with an X marking the spot where they should meet. When she arrived, she found Timar and an epic picnic of cheeses, meats, pickles, olives, fruits and bread. He had set up incense, candles and flowers on the grass.

They became a couple immediately and got engaged in 2016 over a seven-course dinner at Kupu Kupu Barong Ubud, a restaurant in Bali. He proposed with a custom eternity band that represents the cycle of the moon. “It was the most thoughtful and creative gift,” says Joliat. “It was so unique to us.” They wanted their two-day wedding festivities to be just as artsy and eclectic as the are. 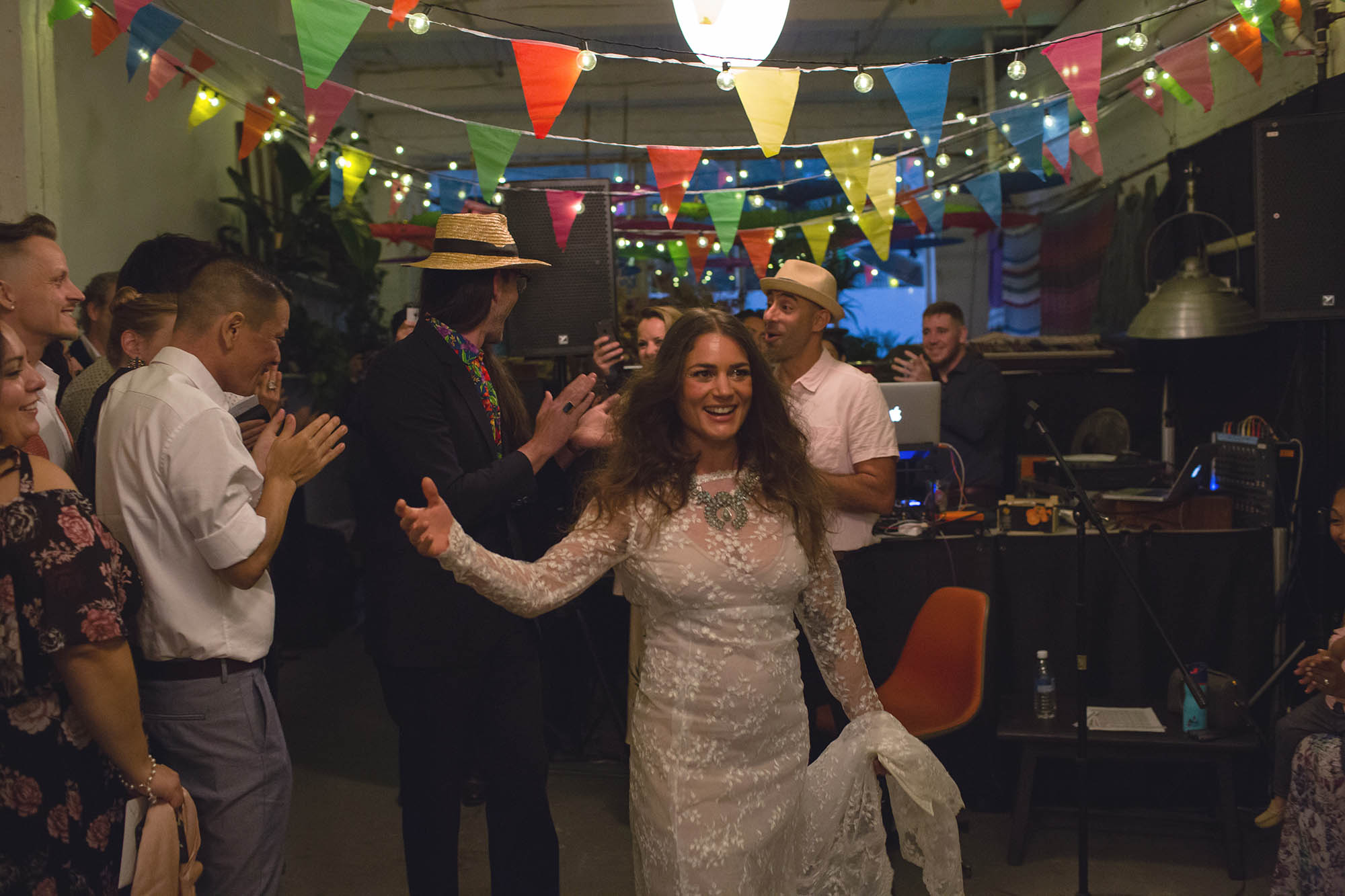 The wedding weekend began on Friday with an intimate ceremony at City Hall. Their immediate family and photographer Jessica Blaine Smith were the only ones in attendance. “Legally, city hall was necessary, even though we wanted an alternative wedding and ceremony,” says Joliat. “We wanted to make the day as fun and alive as possible”: 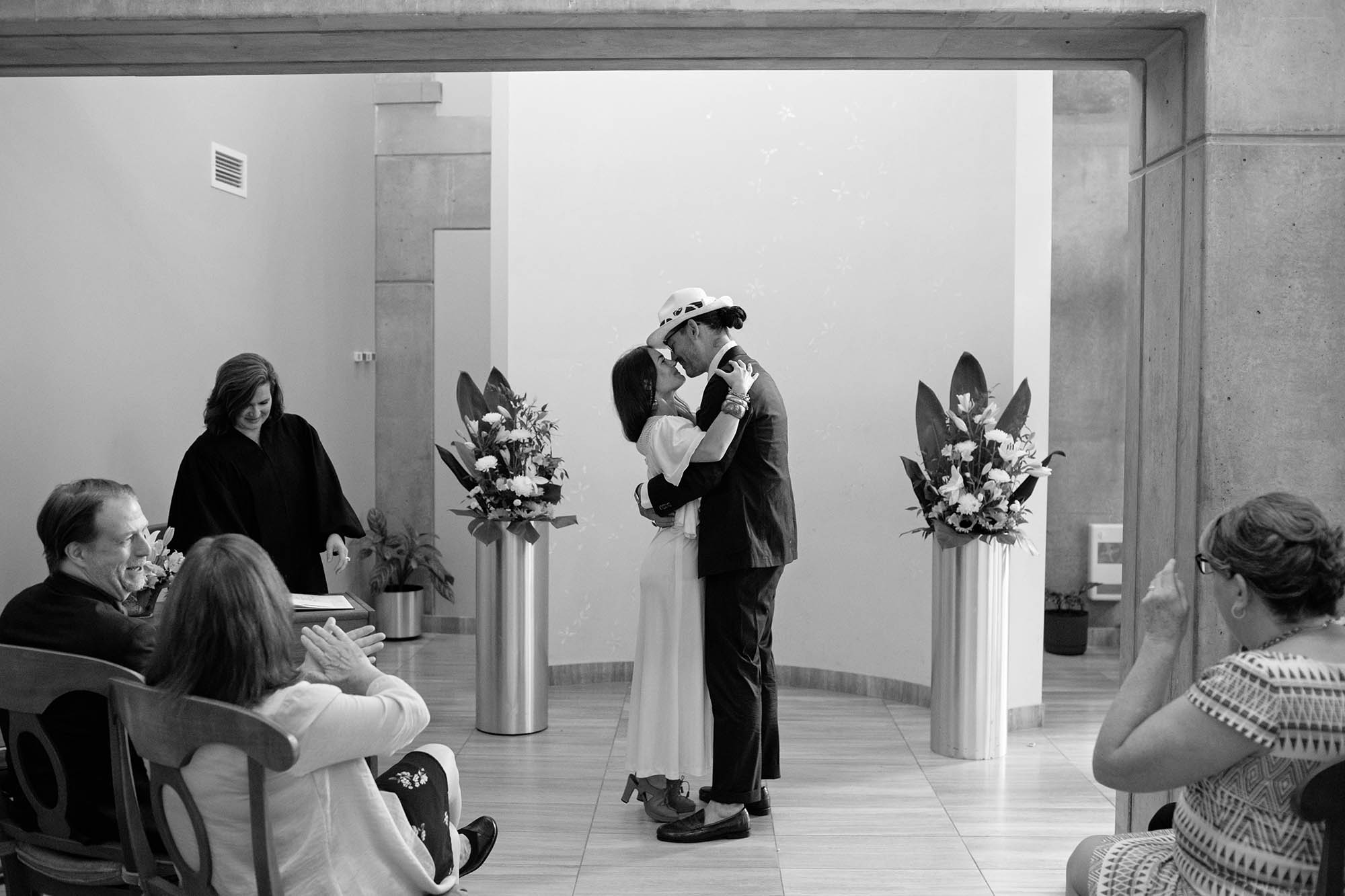 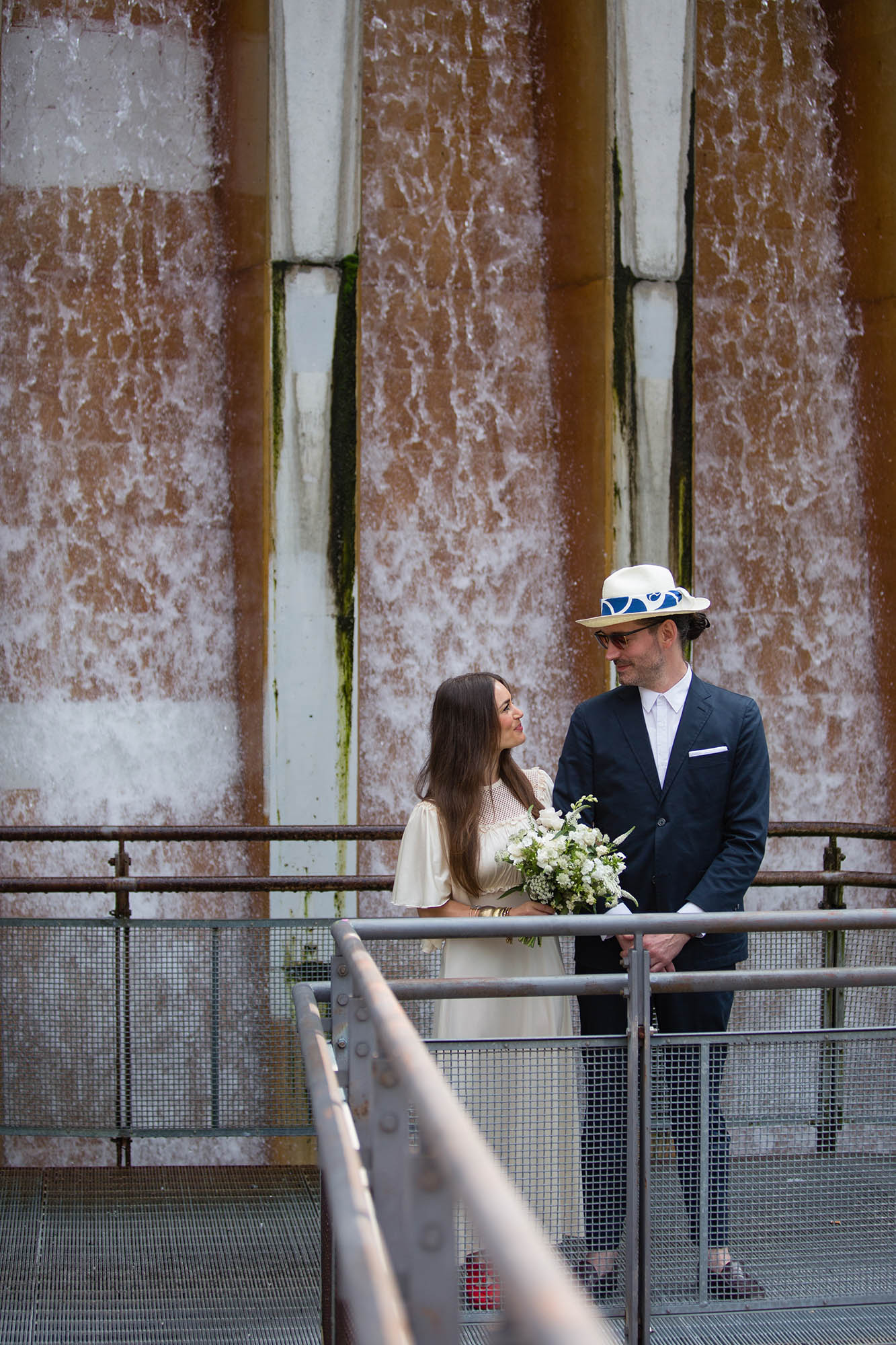 The couple reunited with their family at Le Select Bistro—“because it’s elegant and timeless,” says Joliat—for a celebratory lunch: 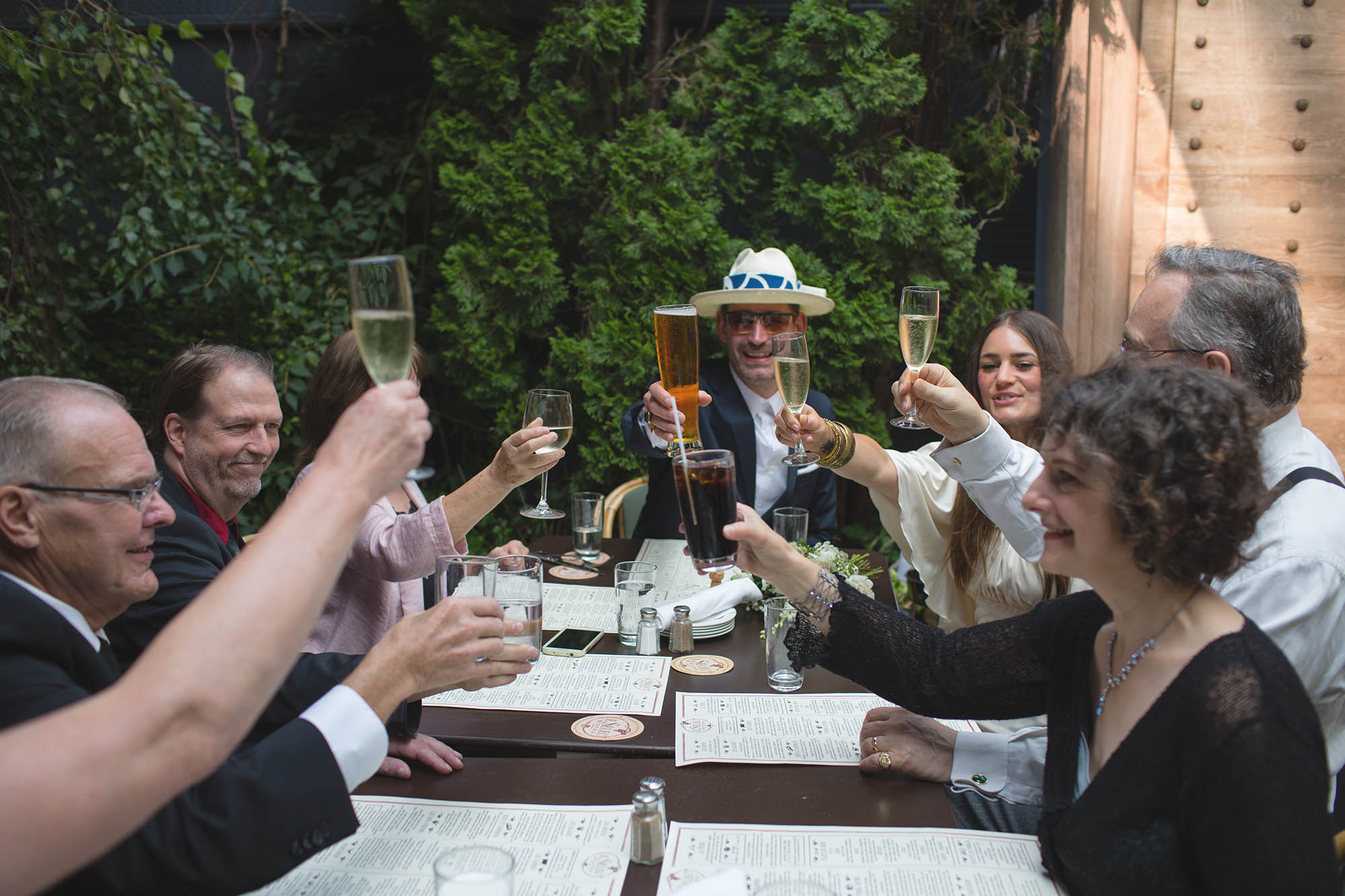 After lunch, the couple went to Kings Landing Barber Shoppe on College, where they had their stick-and-poke tattoo-artist friend Ilona Fiddy ink each other’s initials onto their ring fingers in lieu of traditional wedding bands (they later surprised one another at the ceremony with custom-made bands by K&Co Bespoke): 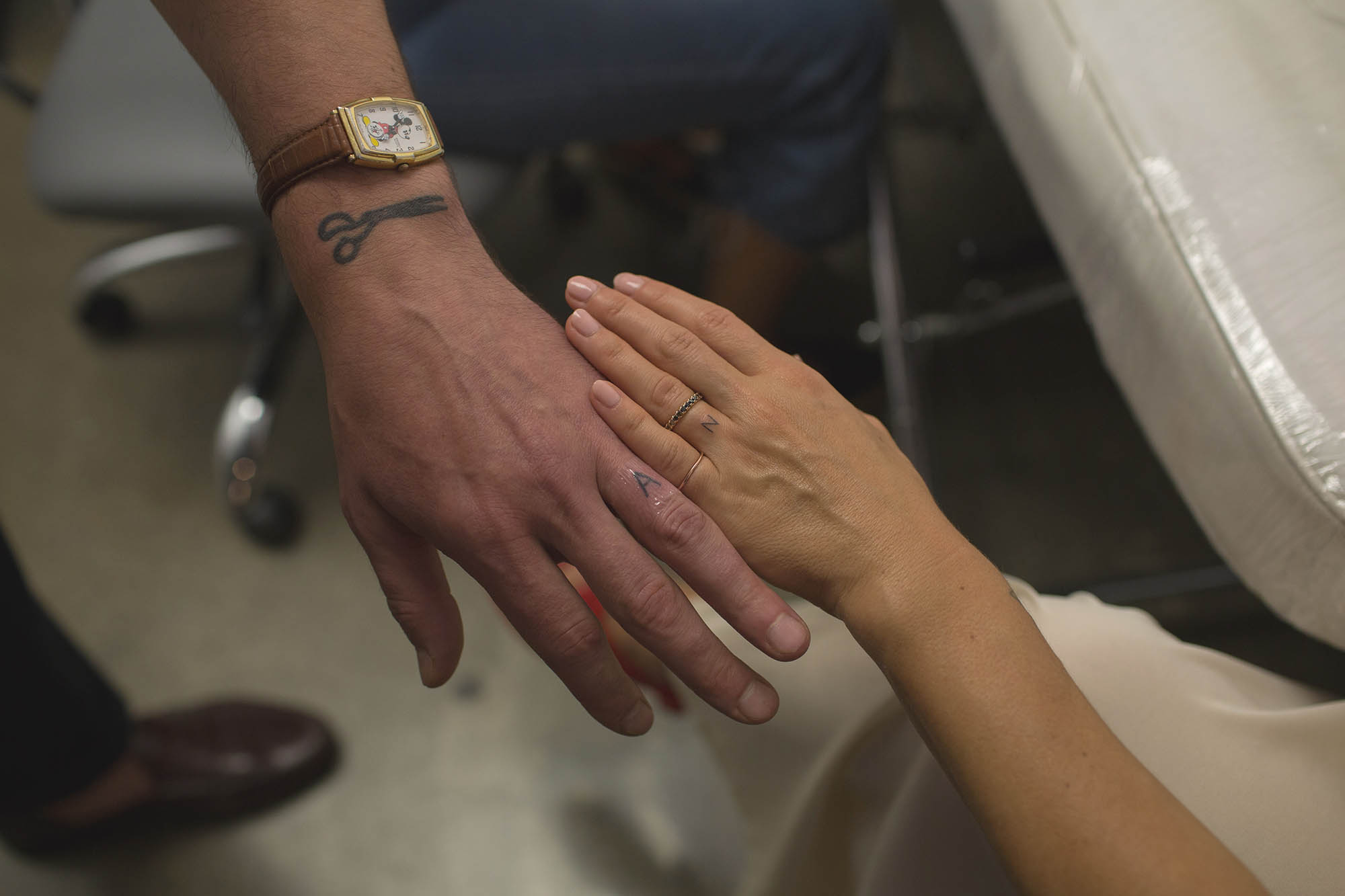 The couple took two months to rearrange and decorate their warehouse loft in Parkdale for their bohemian wedding. On Saturday morning, they woke up early to set up. The couple strung lights and colourful bunting in the alleyway. Joliat went for a meditative walk and picked wildflowers for accents all around their home: 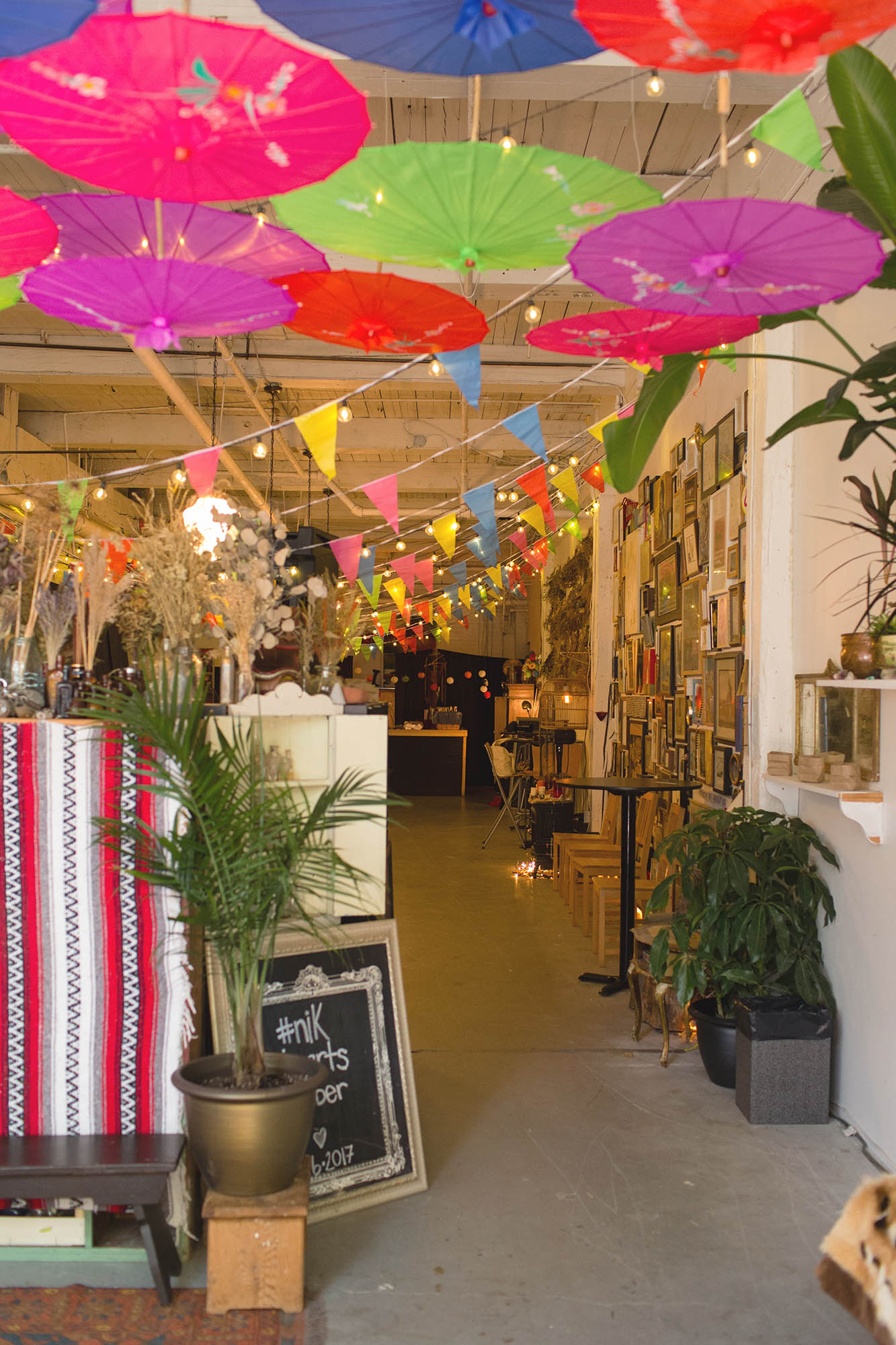 The bride did her own makeup and spontaneously asked a friend to do her hair: 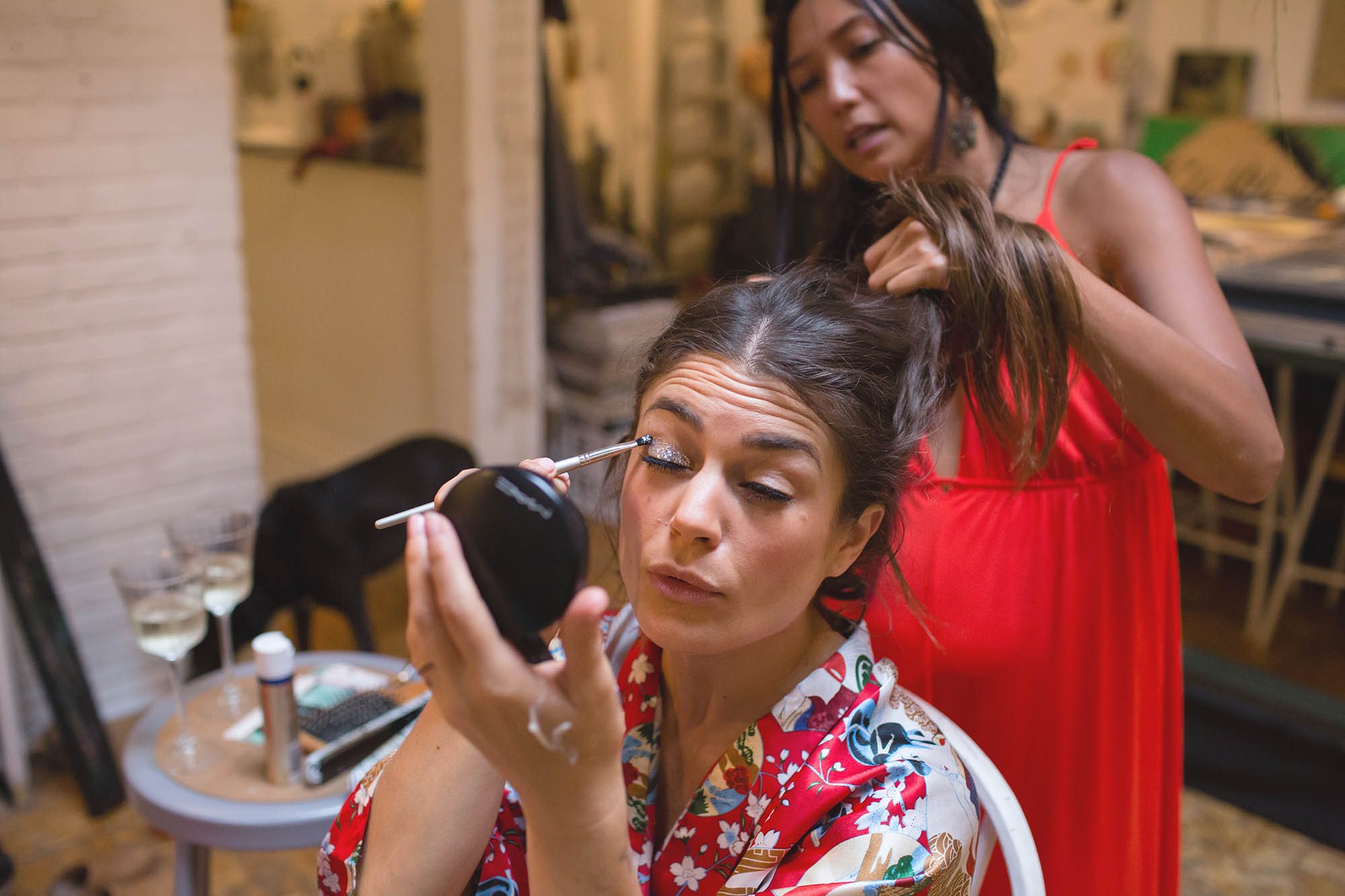 The couple is good friends with Lö Agolli, the owner of Sole Survivor, a shoe repair shop and cobbler in Kensington Market. Agolli custom-created matching red soles for their wedding shoes and engraved the image of a lock and their initials on the soles to commemorate the couple’s tradition of adding a lock to a fence where they first picknicked in Bellwoods each anniversary: 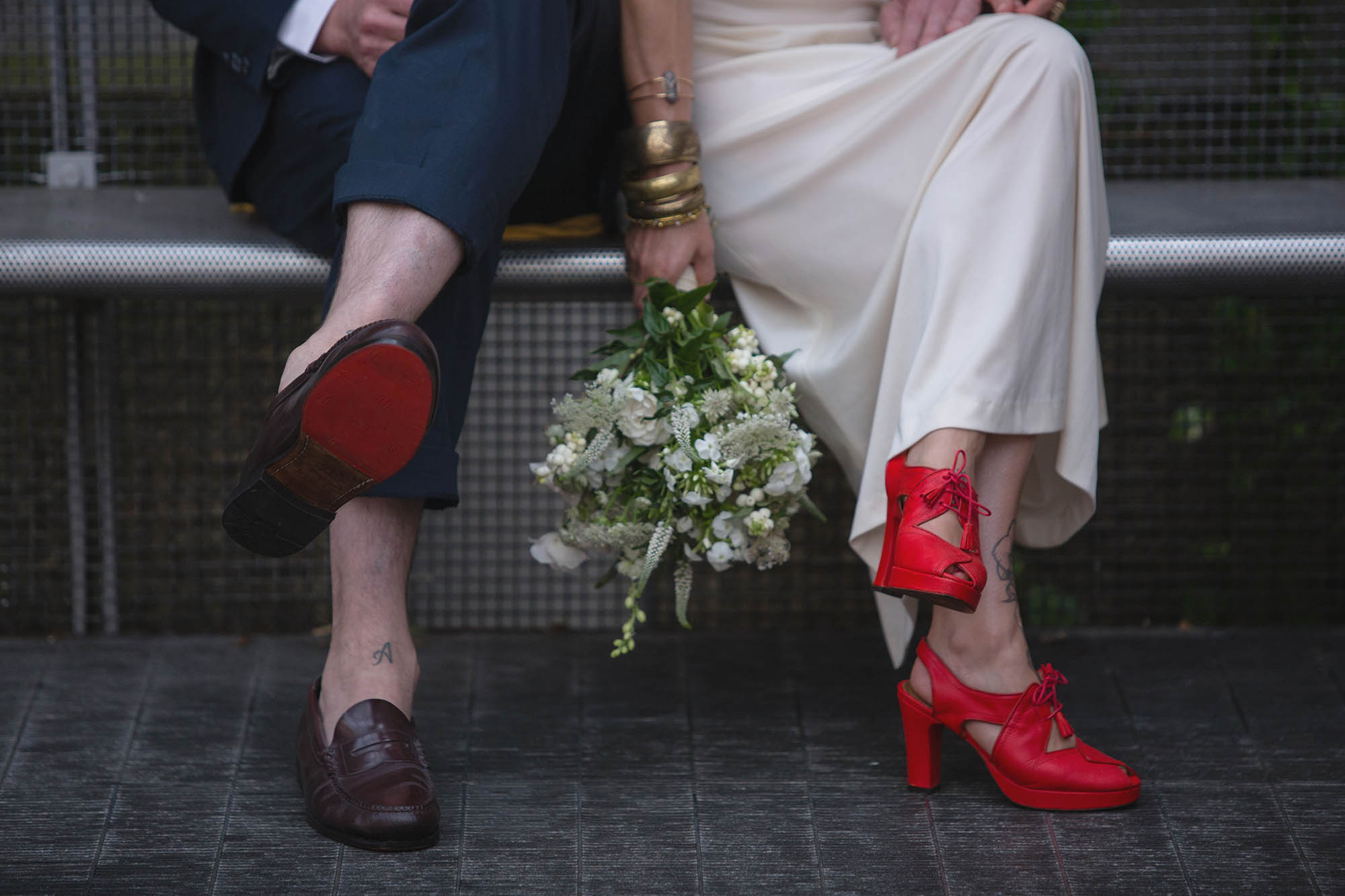 Local indie-pop musician Maylee Todd serenaded guests as they arrived with her harp (Re.verse later blew everyone away with an instrumental hip-hop performance): 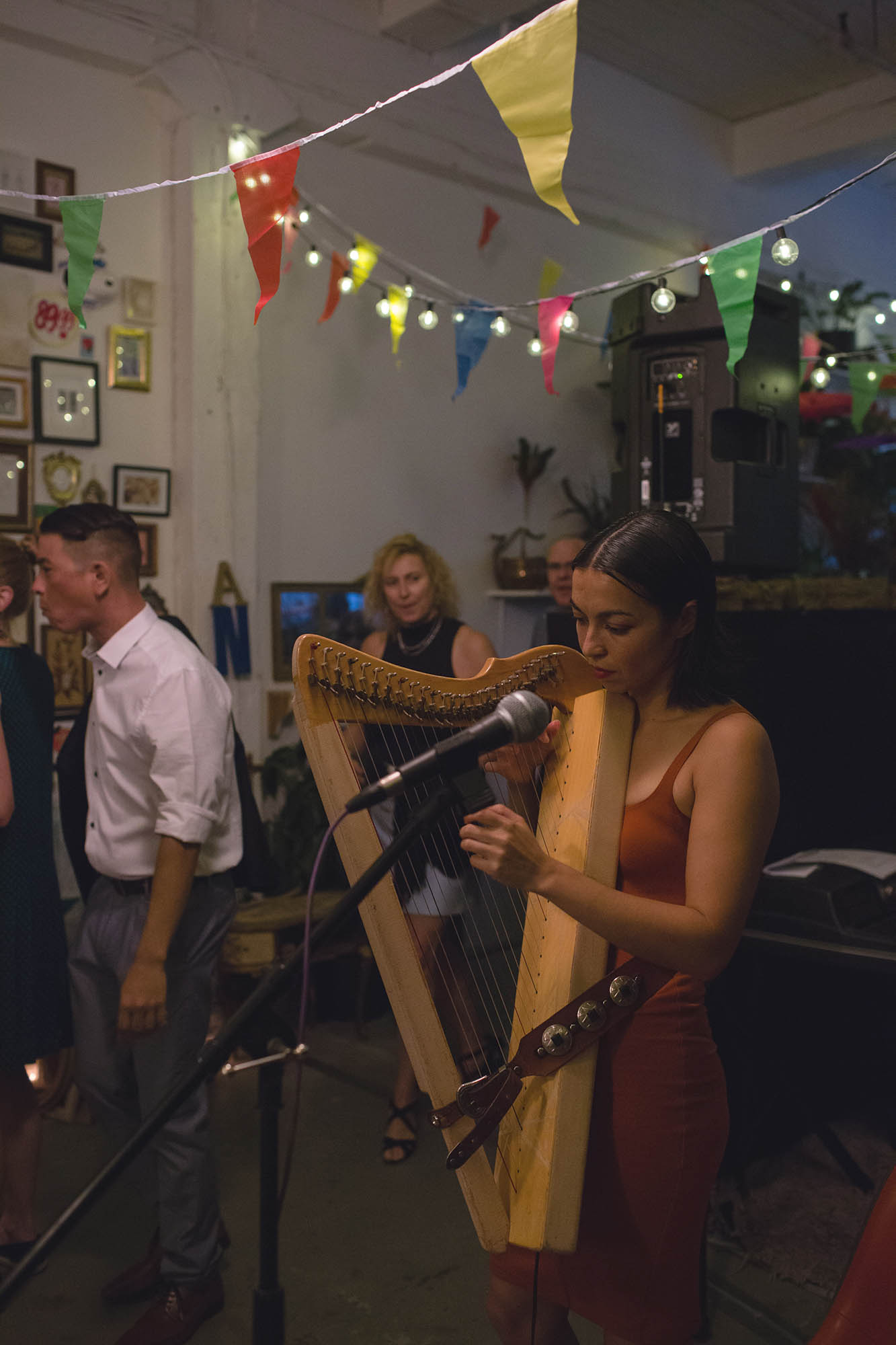 The bride and groom created a sacred circle wreath of dried and fresh flowers for the night’s less-official ceremony. Joliat wrote a personalized ceremony with her meditation group (they call themselves The Peace Warriors). It focused on honouring earth, air, fire and water. To honour her late father, the bride also took sand from a tree that her family planted in the Beaches to mark his passing. “We poured the sand in a circle for each of us to stand in, to have my father’s essence hold our roots deeply, in strength, in acceptance, in love,” says Joliat: 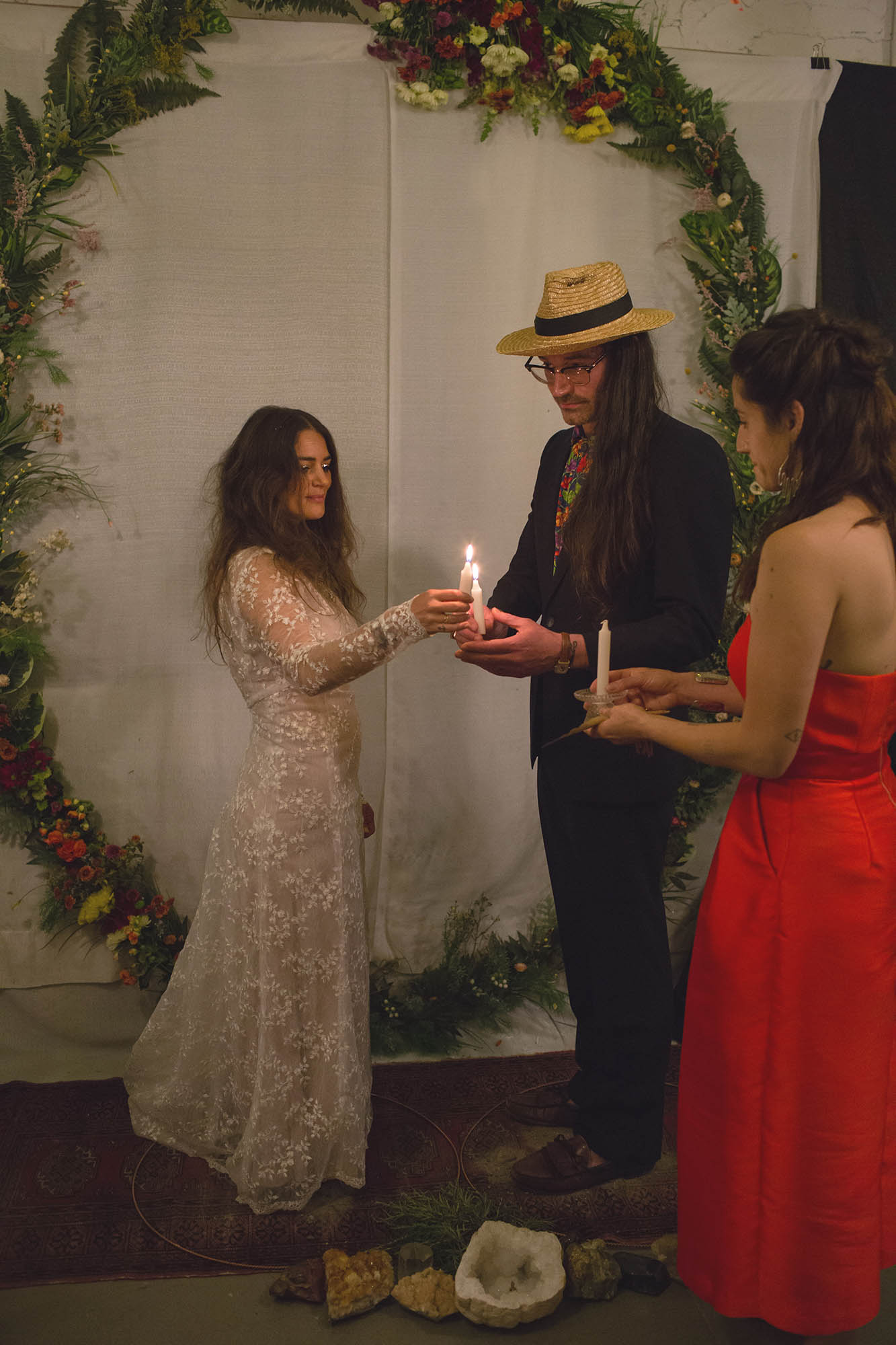 As a surprise, Joliat and Todd secretly arranged for guests to sing “God Only Knows” by the Beach Boys, and handed out lyric sheets: 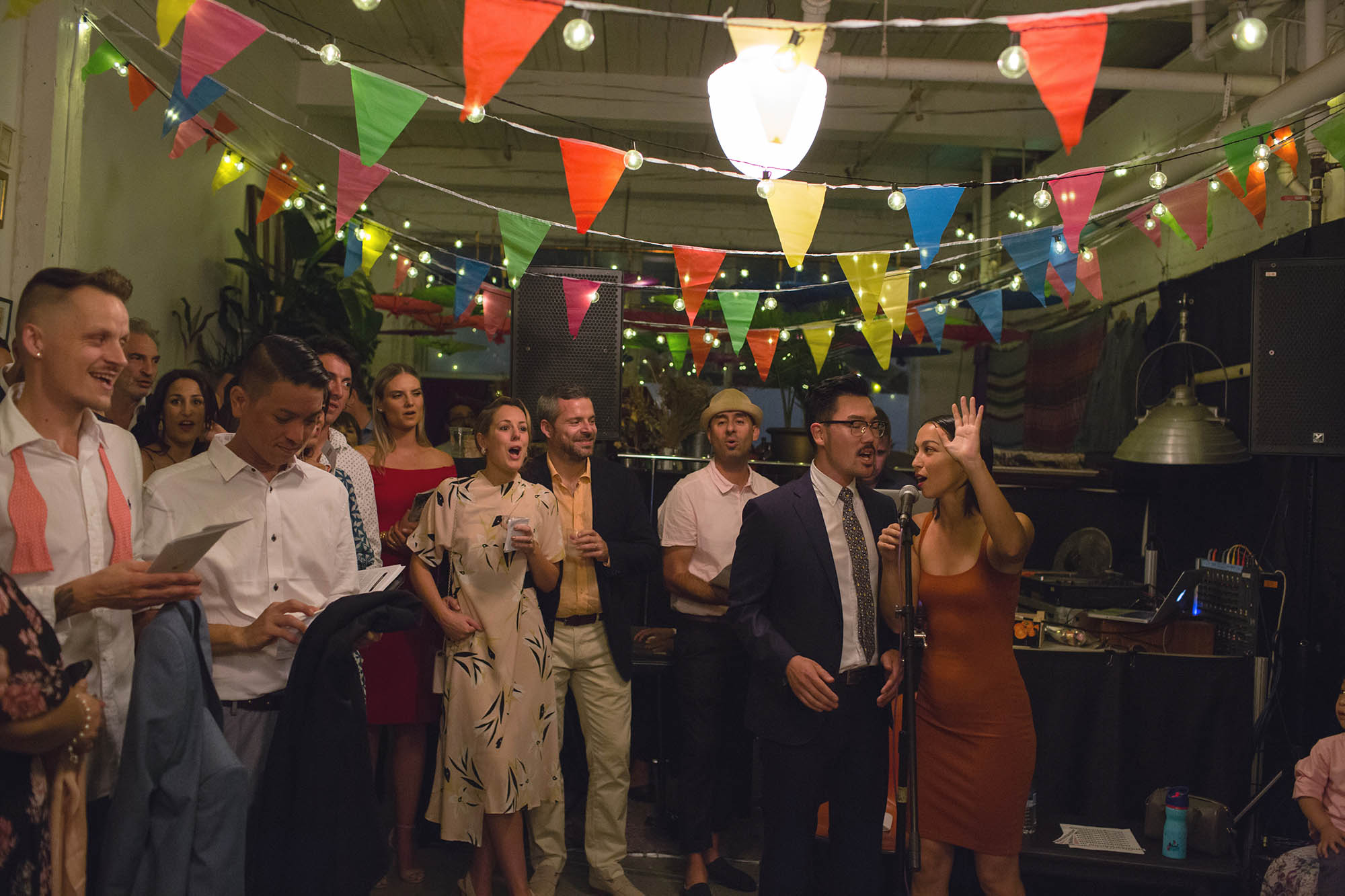 The Tempered Room created epic charcuterie boards as a nod to the couple’s first date: 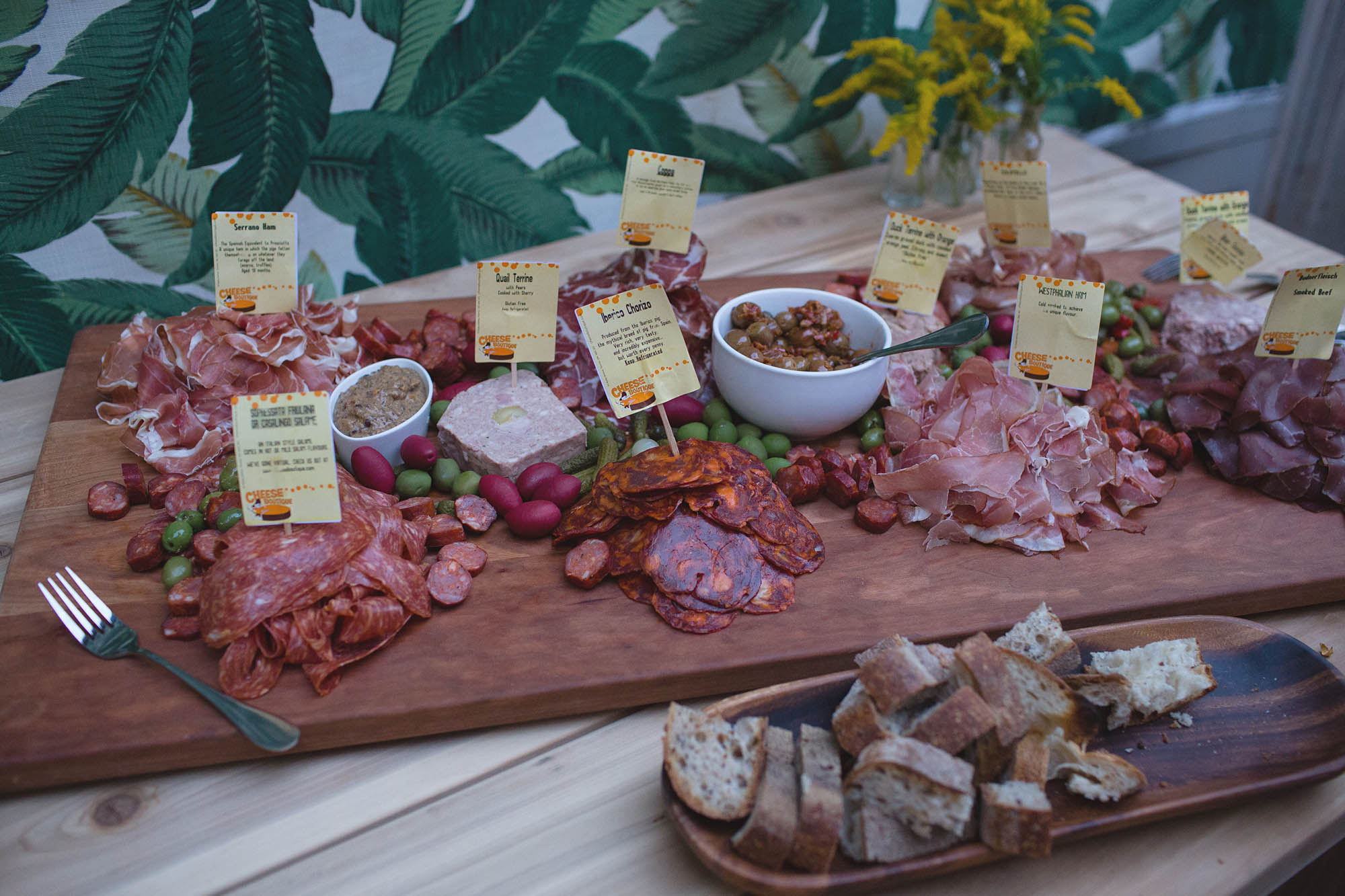 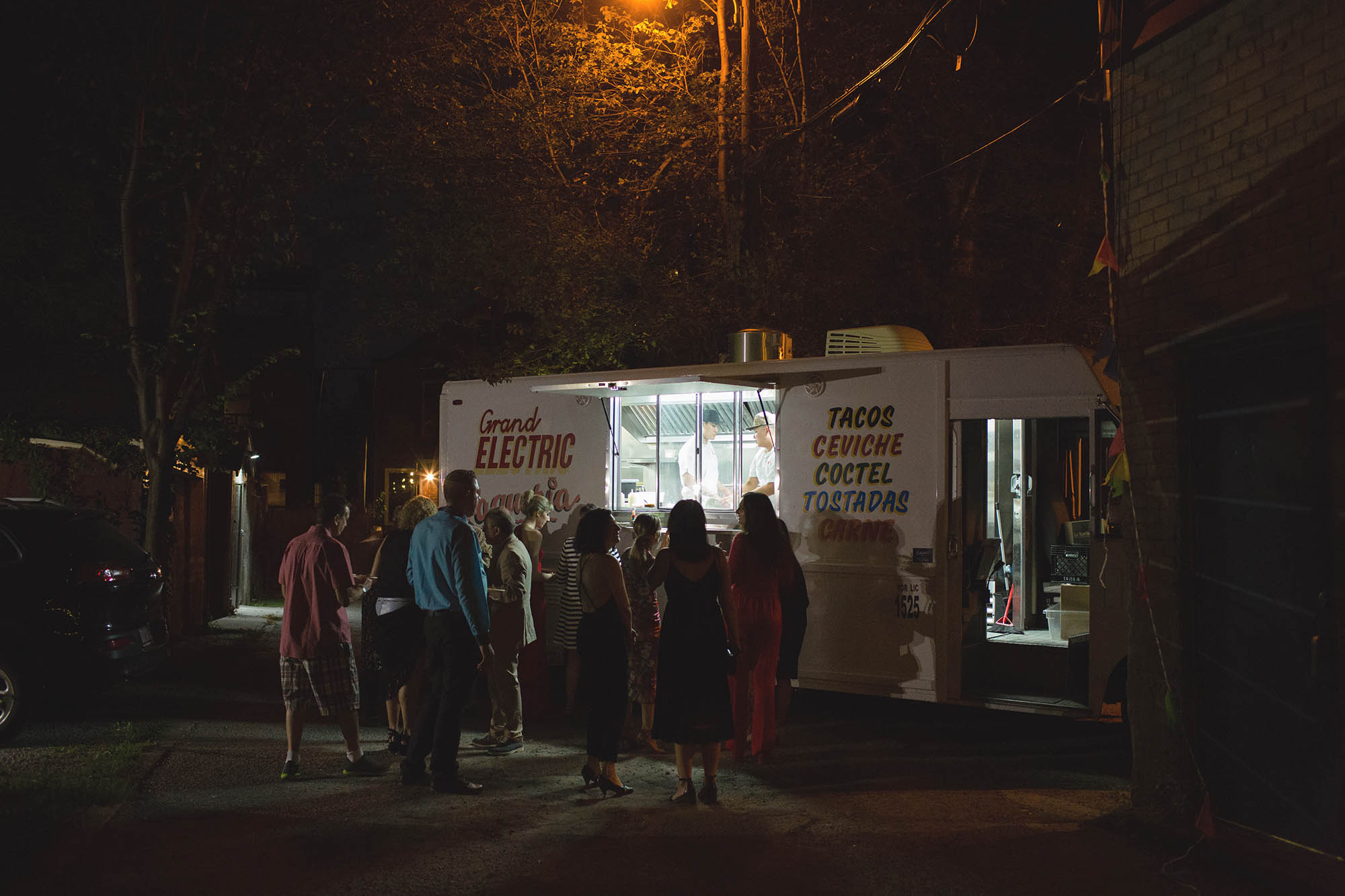 Joliat has been reading tarot cards for years, both privately and at Misfitstudio. “Tarot plays a role in connecting to mystical elements in this life, so it was only natural to offer tarot at the wedding,” says Joliat. The couple’s families built a tent for two tarot readers; they set up altars to deities, trinkets and crystals, and read cards all night long. “It was quite beautiful end, creating a cozy, magical space to crawl into for a read”: 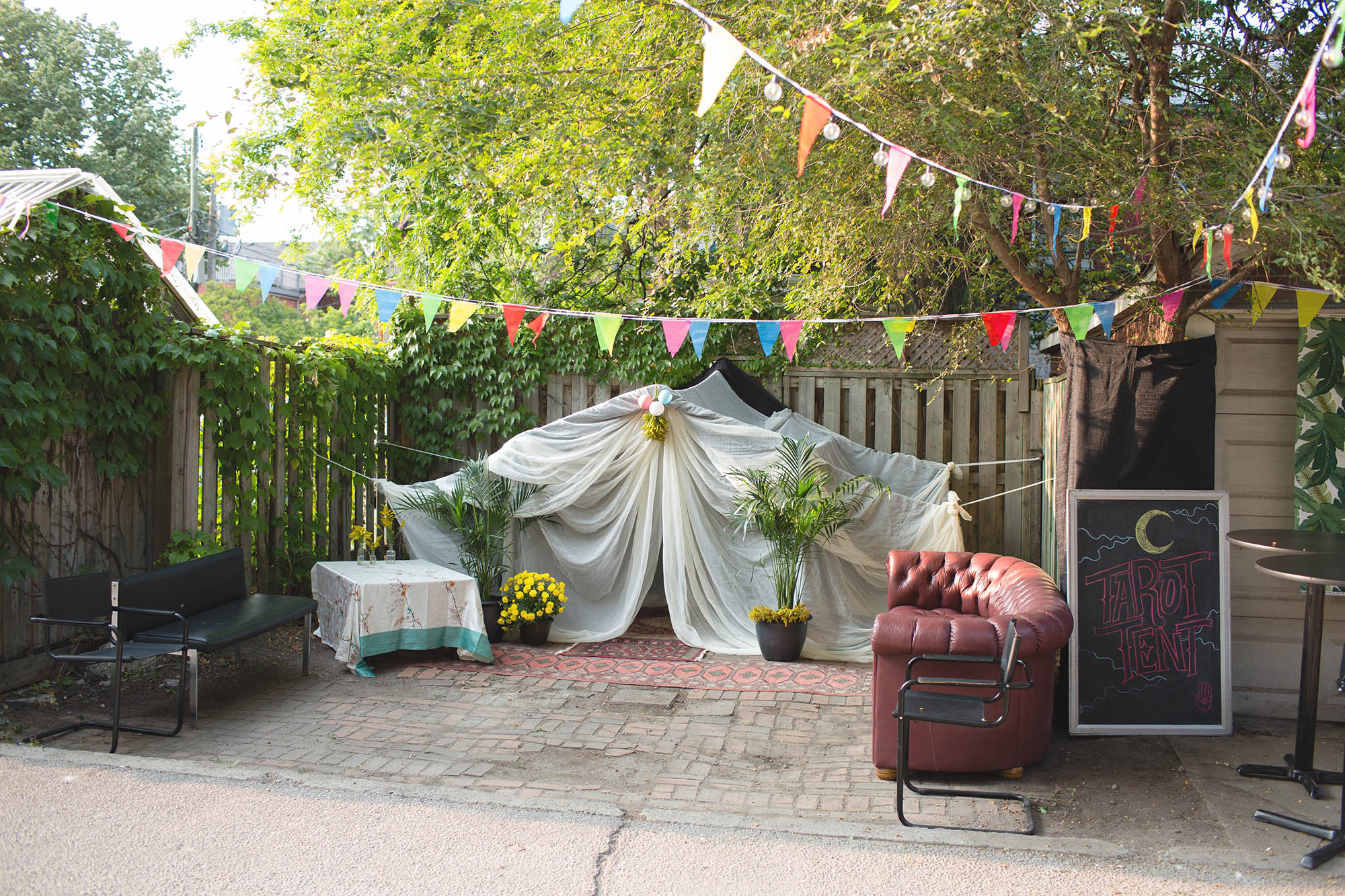 The couple also had an aura booth, where Evelyn Salvarinas of Rose Aura offered aura readings. Evelyn had never done a wedding before, so she created a custom booth for the experience: 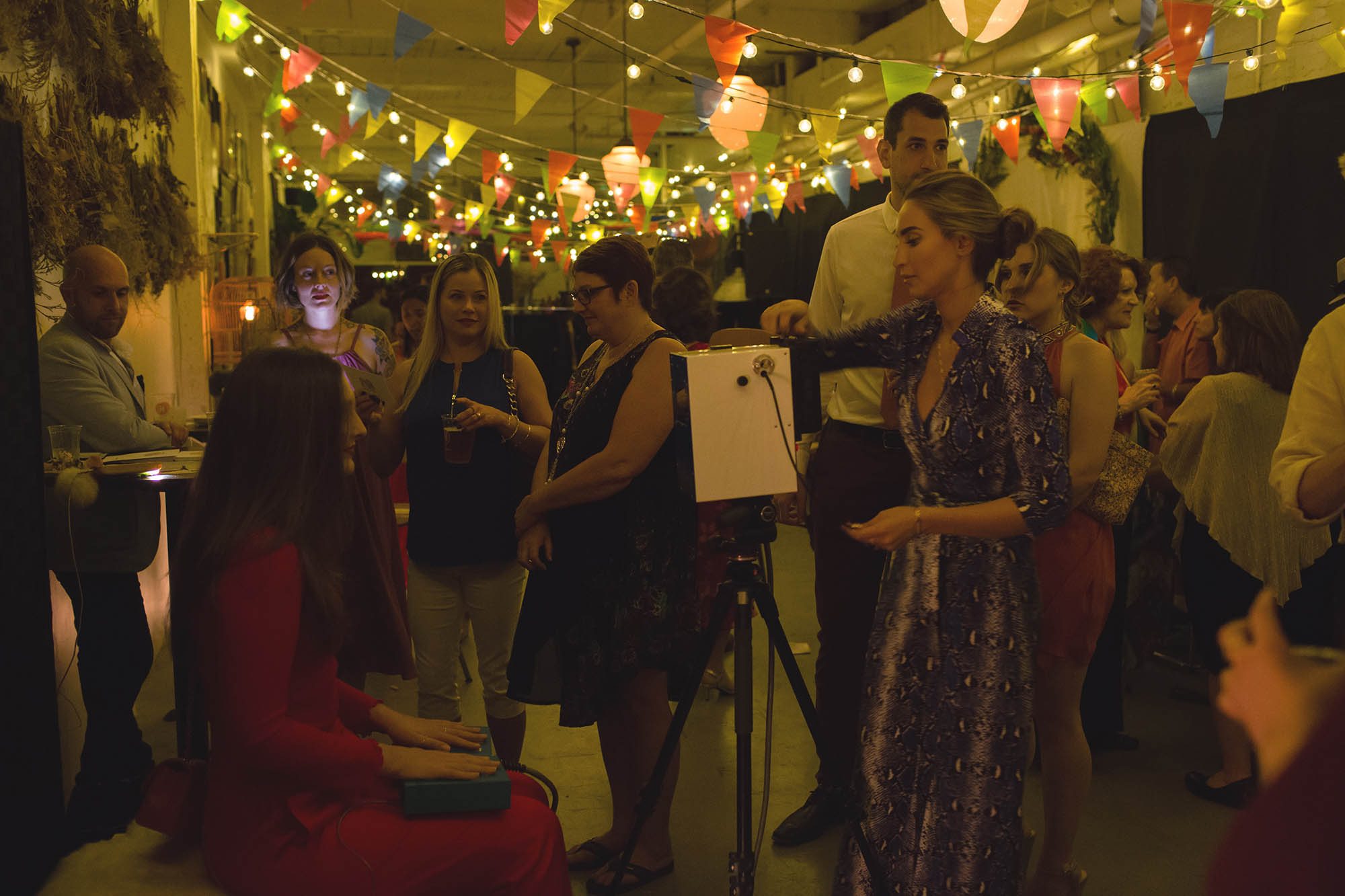 Guests danced and celebrated past 3 a.m.: 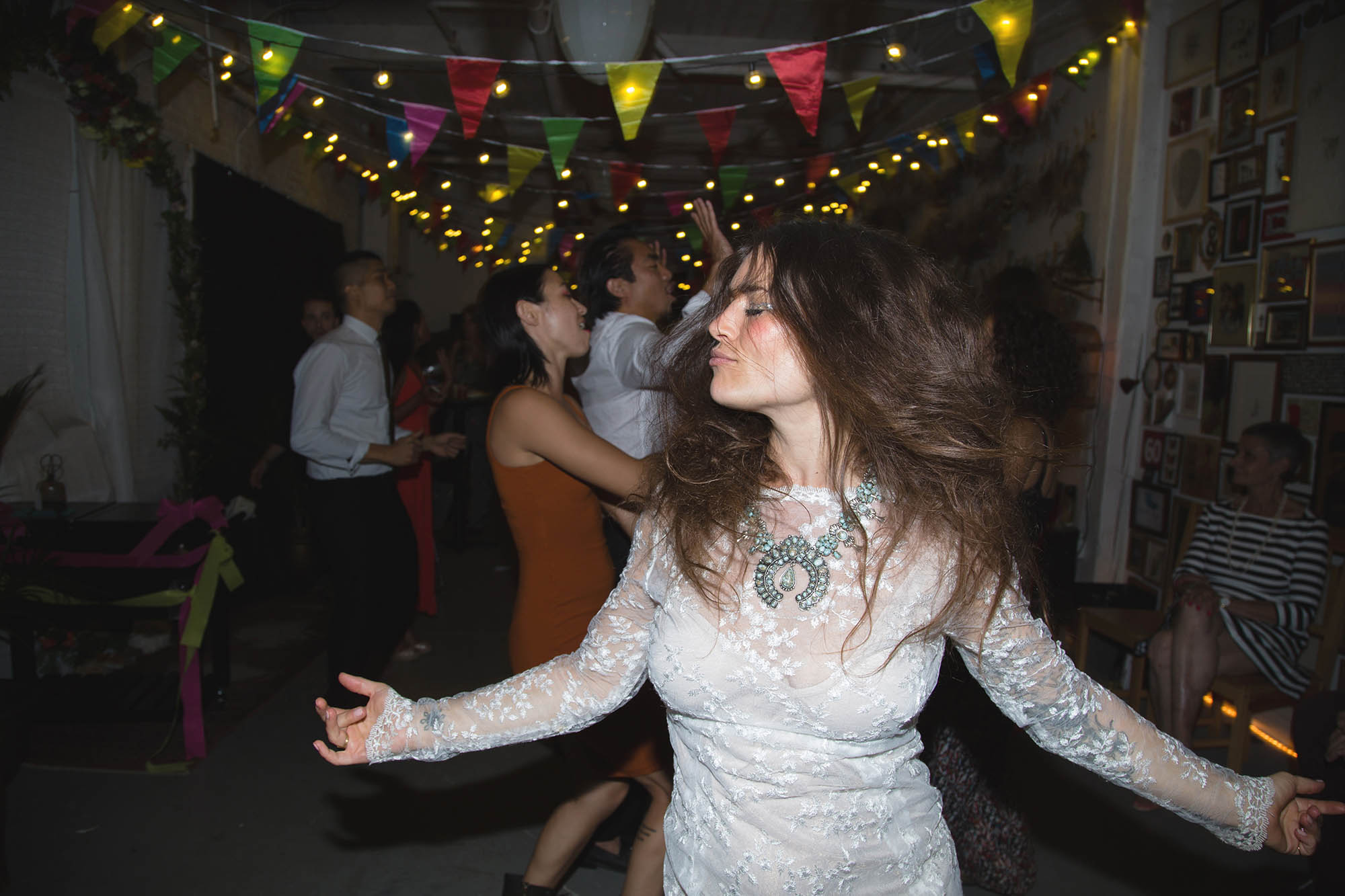 An earlier version of this post contained an incorrect spelling of Timar's last name.