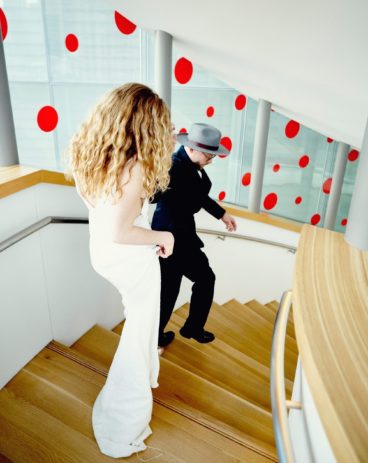 When Alistair Leyland and Mary Ratcliffe met a decade ago at a party, neither of them was single, and they only spoke briefly, but it was memorable: “It was a bit like being punched in the face,” says Alistair. “At first, things were a little fuzzy, but after that I had all the clarity in the world. There was something so outrageously cool, calm and mischievous about Mary.” Mary had aspirations to build and design furniture (which she now does full-time), and Alistair, who owns a digital design agency, was intrigued. Four years later, in the fall of 2012, they bumped into each other again, and this time Alistair asked her out.

Their first date was at Soho House, where they ordered the entire menu and spent the night drinking Piquante cocktails (tequila and hot pepper sauce). On their third date, Alistair had his good friend Cory Vitiello prepare a special off-menu dinner at the Harbord Room. His efforts to impress Mary worked. Just three months later, they moved into a loft in Parkdale.

On a weekday afternoon in September 2016, while Mary was working on a design project in her parents’ garage, Alistair asked her dad, Walter, for his blessing. Overwhelmed, Walter called the entire family into the living room to profess his delight and unintentionally spoiled the surprise. “We just ran with it,” laughs Mary. “Al and I had already talked about getting married and had even gone to look at rings. My dad spilling the beans just added to the excitement, because we all got to share in the proposal.” Within the hour, they were all celebrating together at The Harbord Room with friends and family.

The thought of planning a large-scale wedding seemed daunting, so they decided to piggyback their celebration onto AGO Massive—the annual contemporary art party. Alistair’s company, Array of Stars, was a lead sponsor for the event, which included a private tour of the much anticipated (and Instagrammed) Yayoi Kusama: Infinity Mirrors. 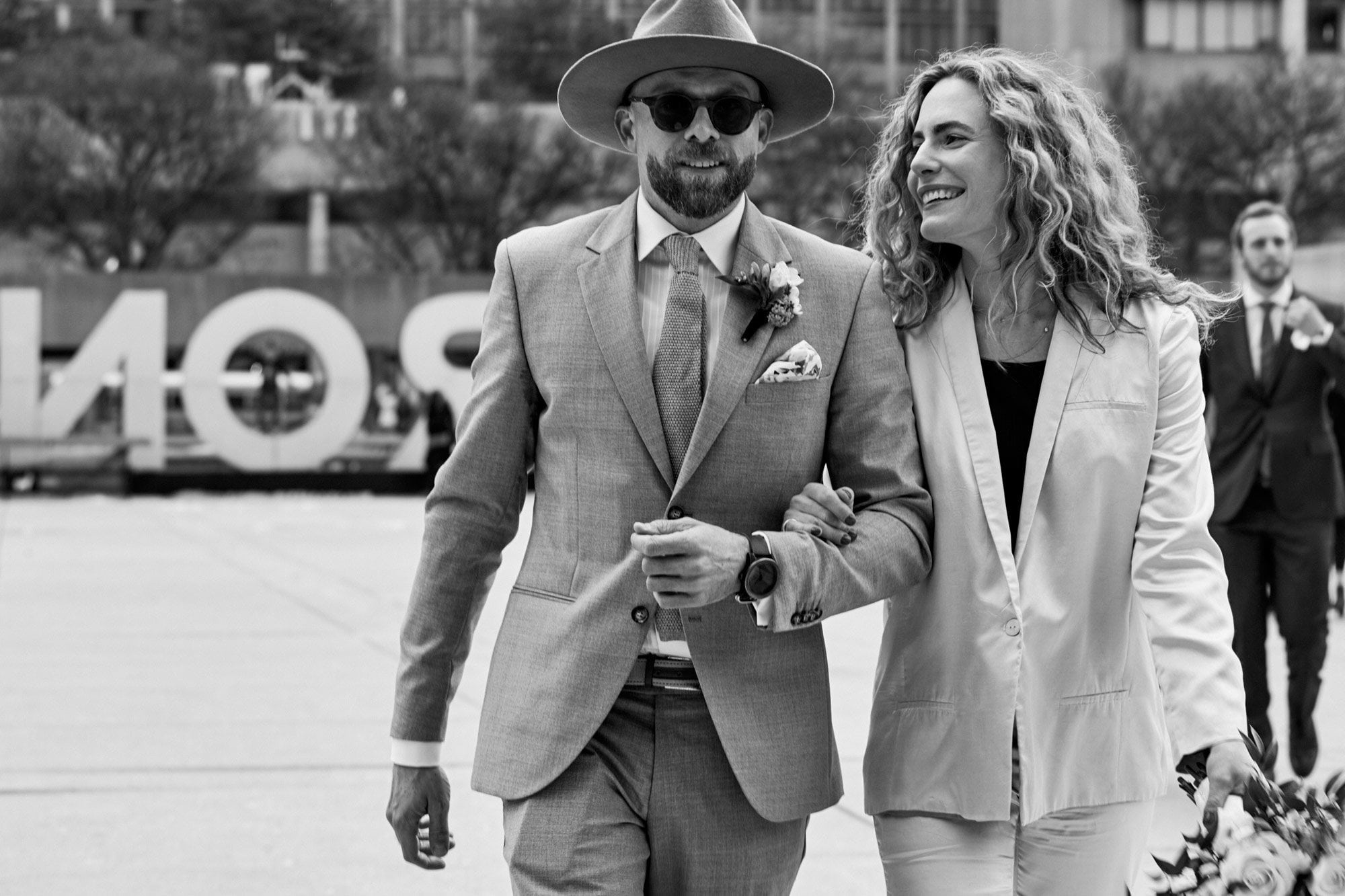 On the day of the wedding, the couple had a small lunch on the third floor of Soho House. That afternoon, they walked over to city hall together for the ceremony: 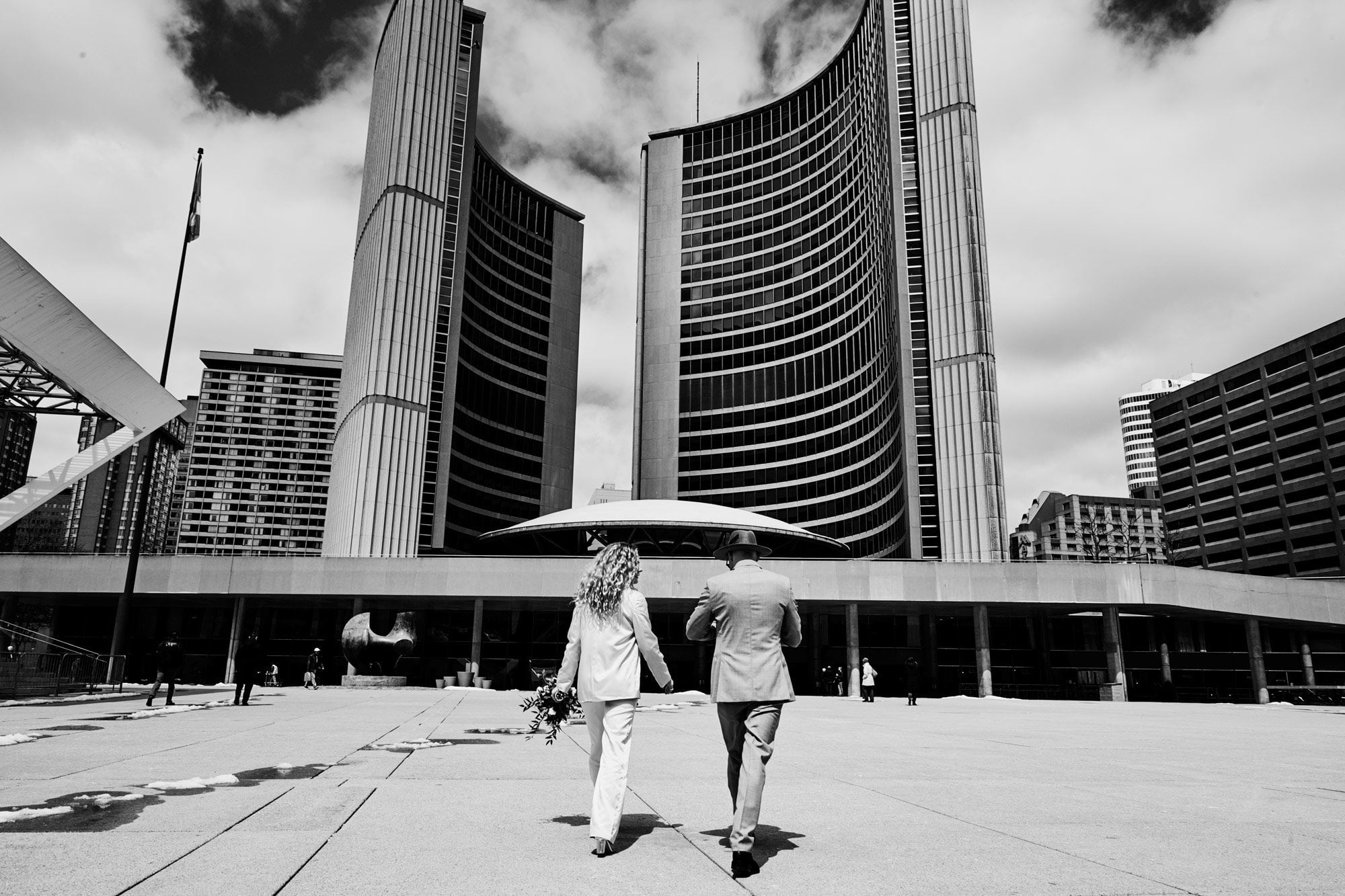 Mary didn’t think she wanted flowers but changed her mind on the morning of the wedding, so her mom ran off to pick up a bouquet of white roses: 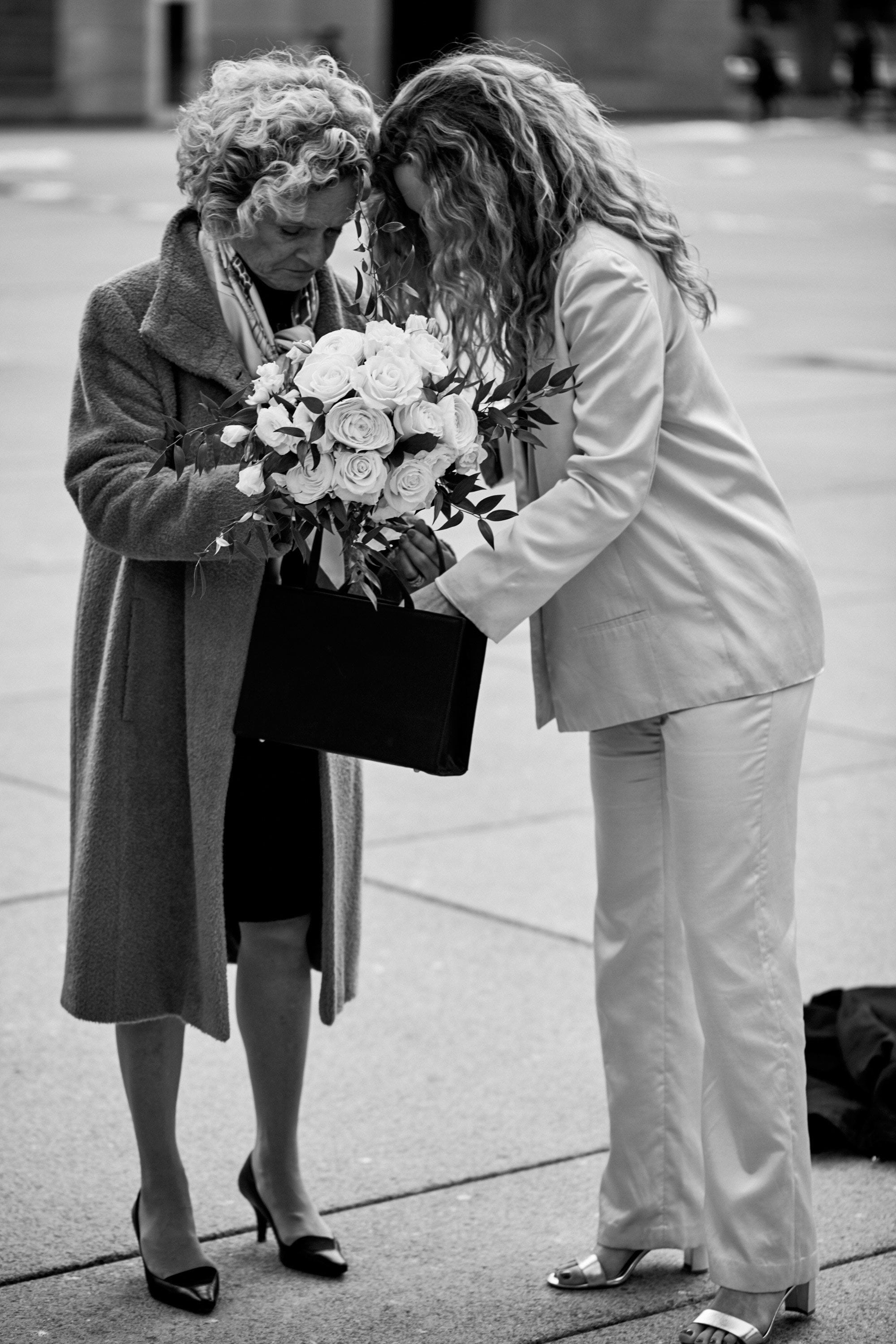 The service was intimate, with 22 guests in attendance. The couple maxed out the capacity of city hall’s ceremony room: 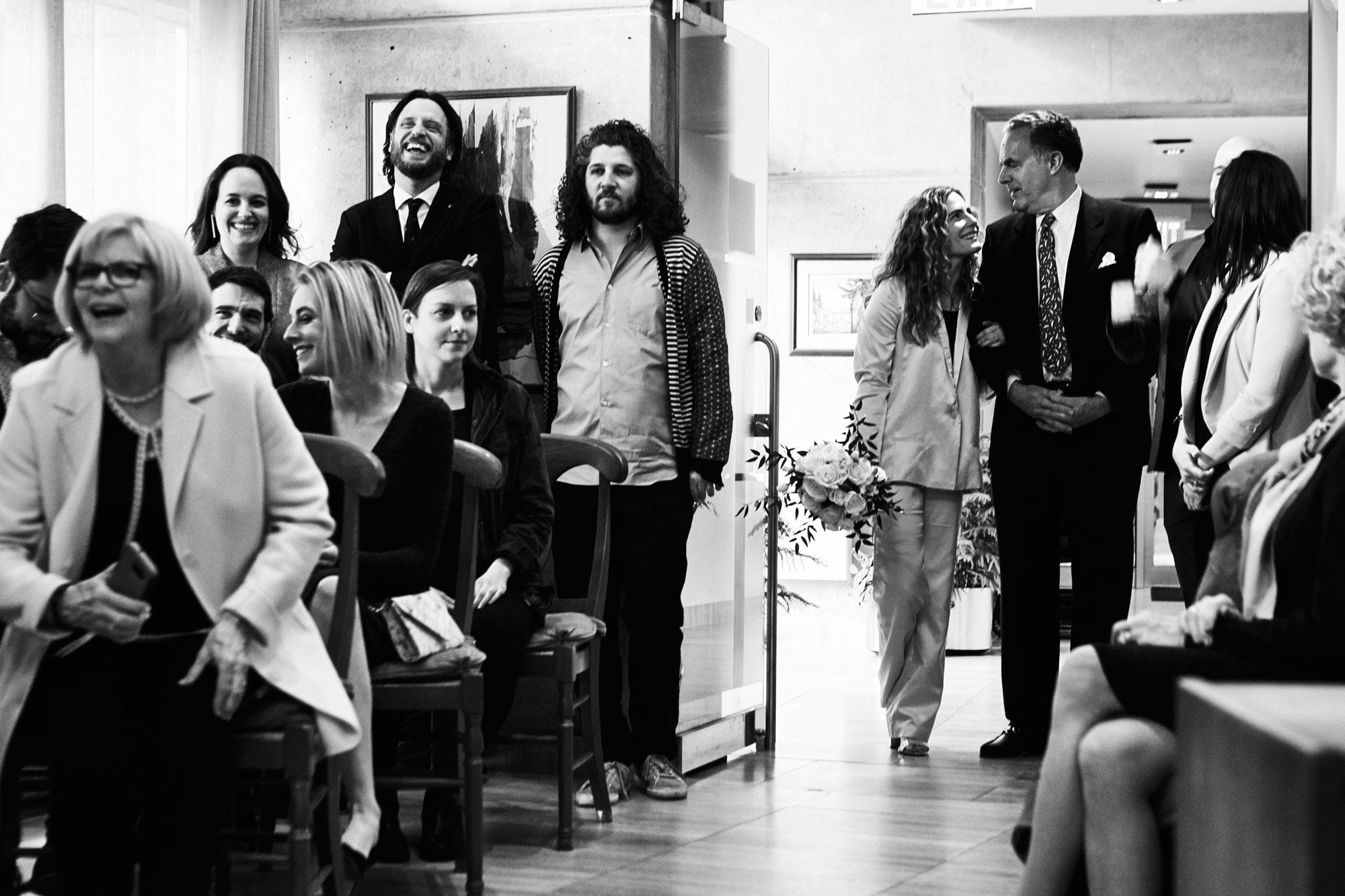 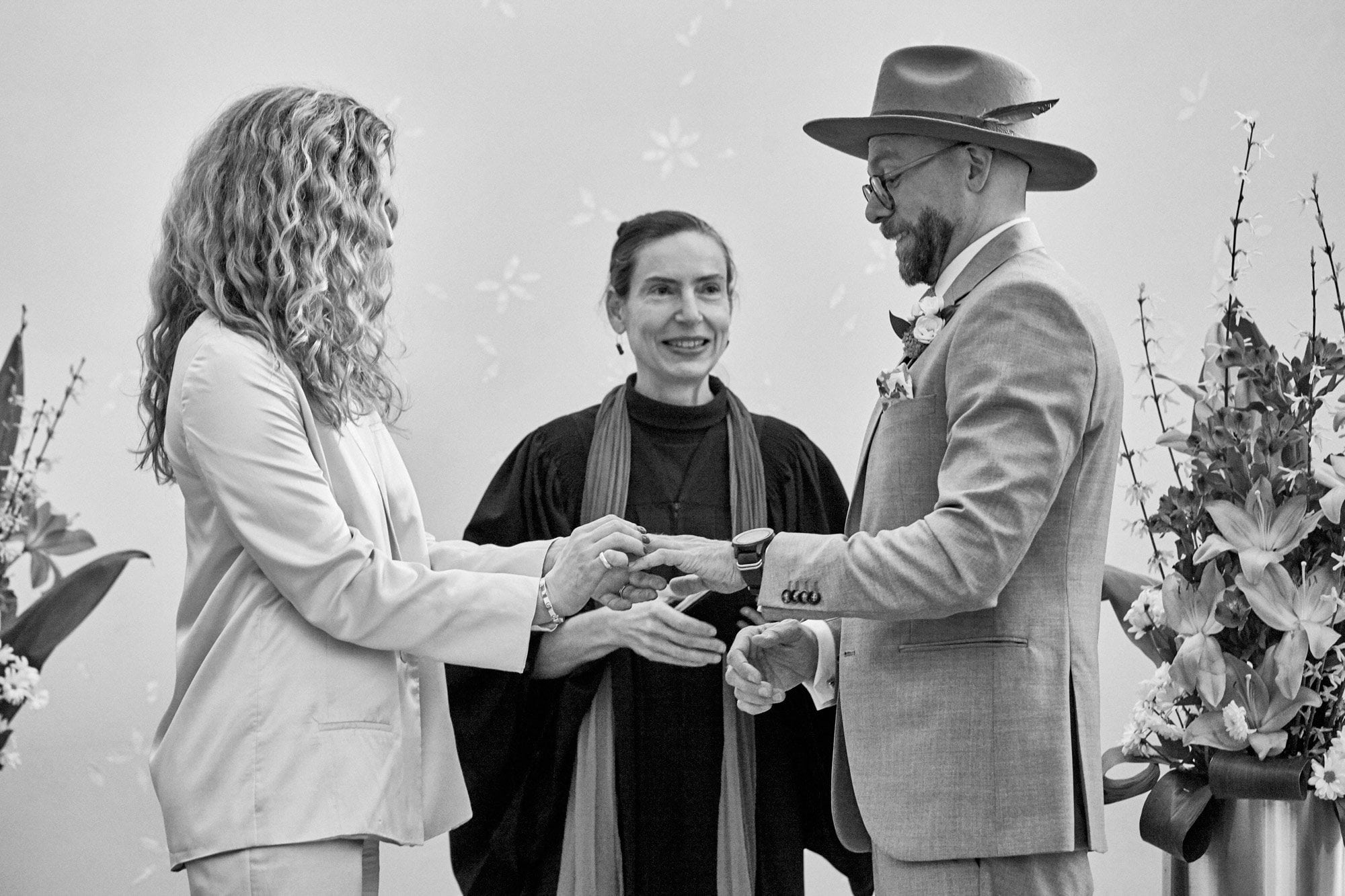 After the couple said their “I do’s,” Mary and her friends made their way to her parents house to get ready for the party. She wanted to keep things casual by wearing her hair natural. “I don’t even own a blow dryer,” she says: 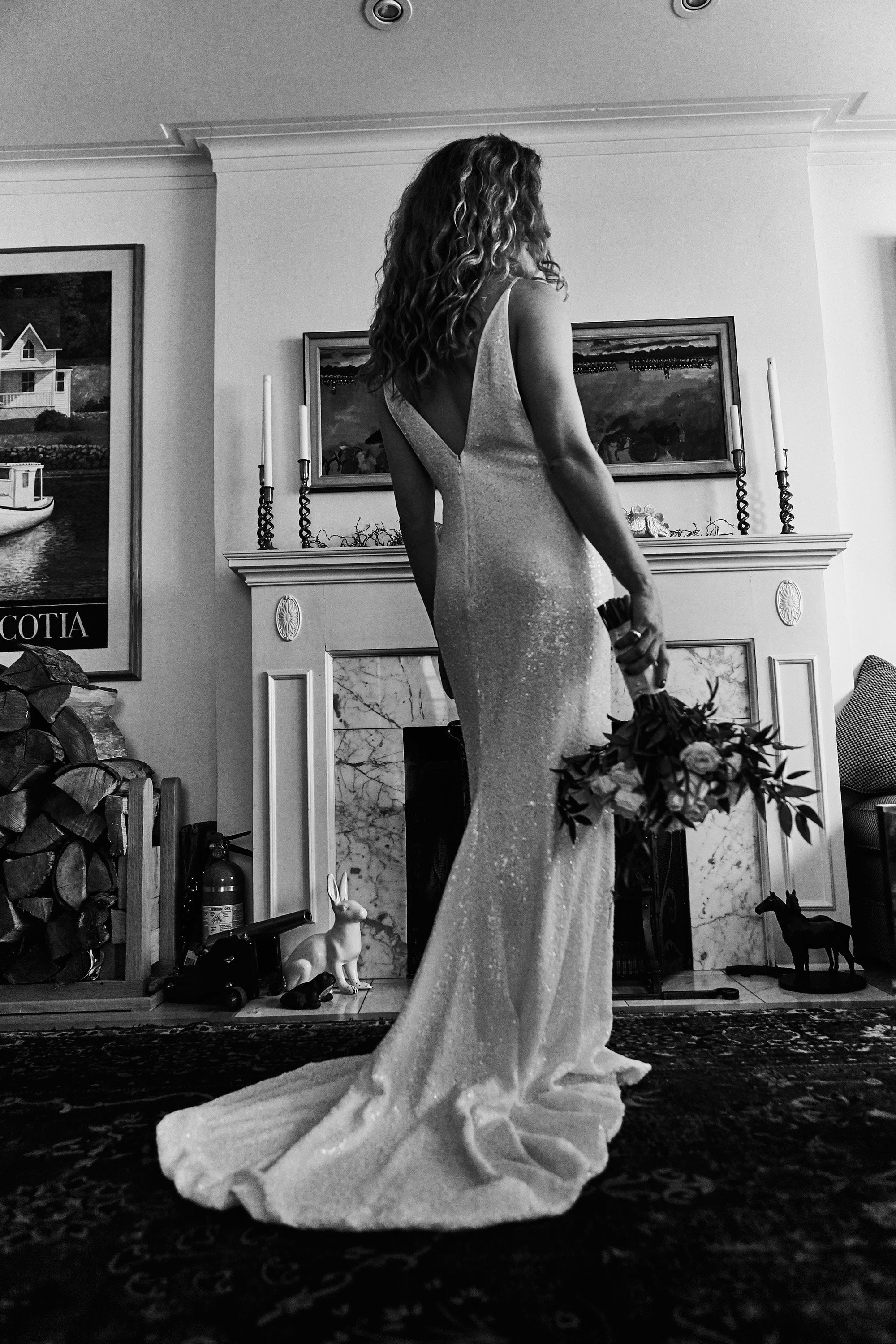 They spent some time relaxing with champagne, penis-shaped cookies, and sushi platters: 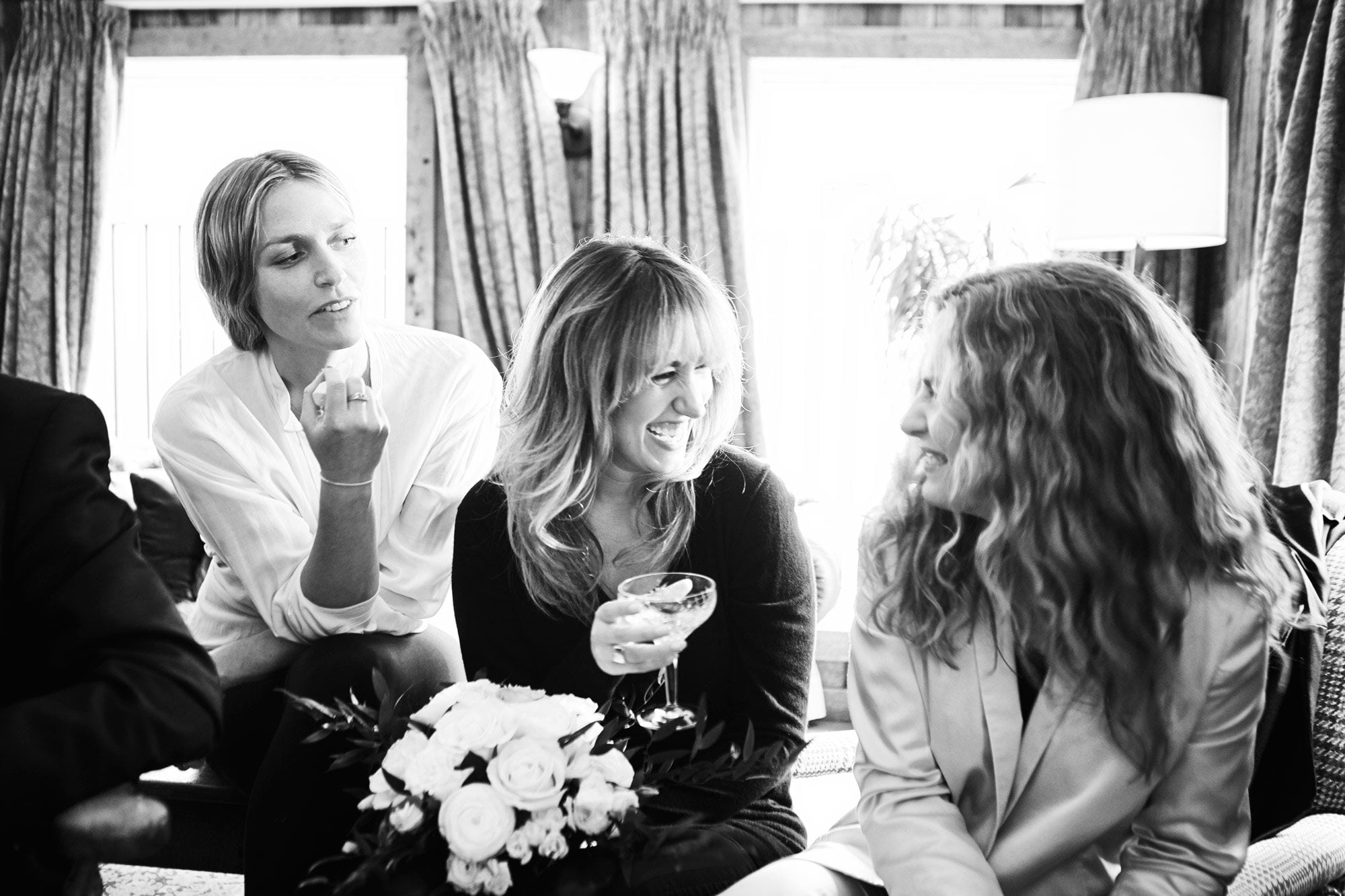 Mary arrived at the AGO in a white limo (her mom wanted at least one traditional element), and Alistair was waiting on the steps to meet her. The newlyweds made their grand entrance into the lobby together before heading off to explore the Kusama exhibit: 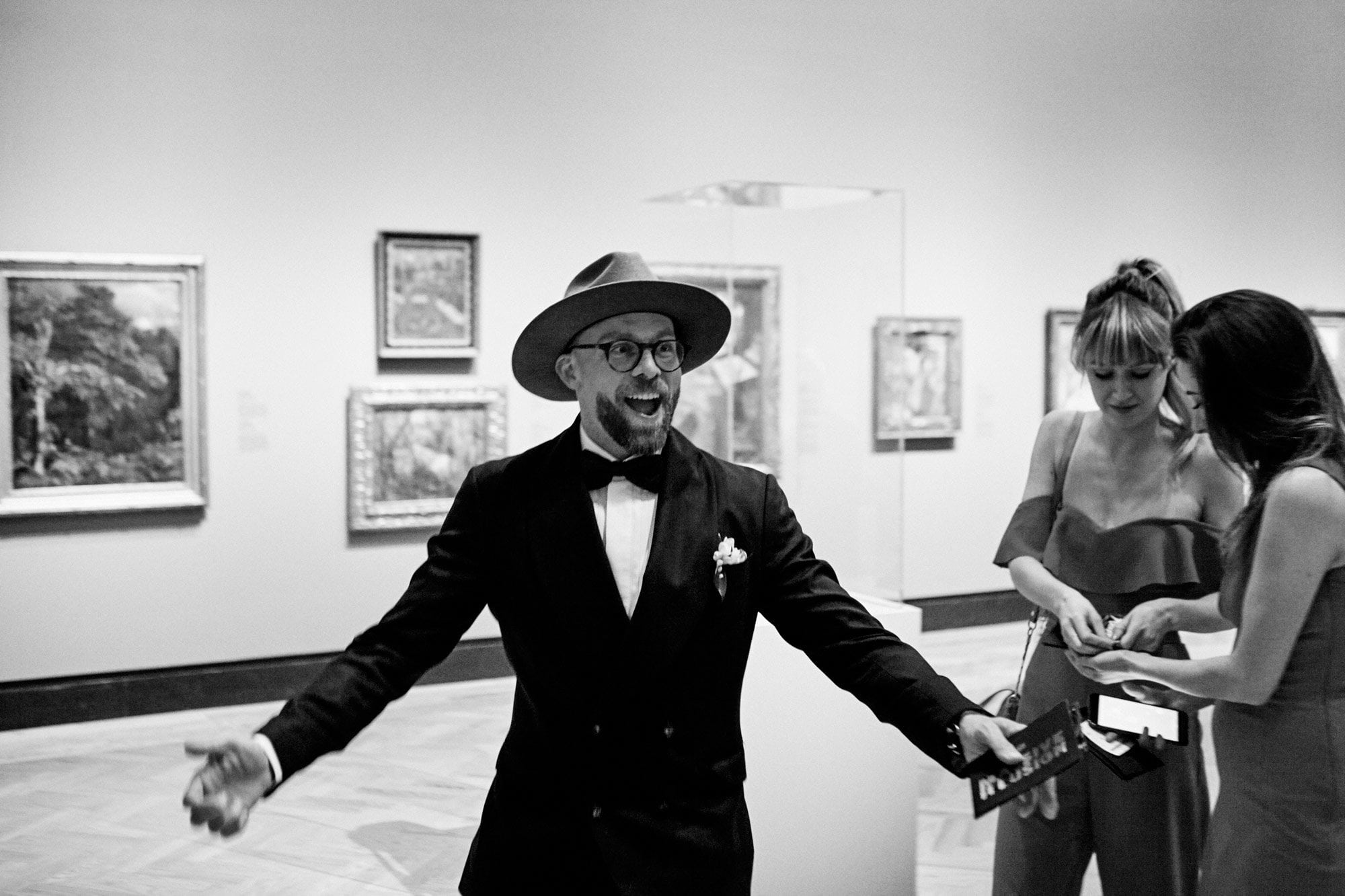 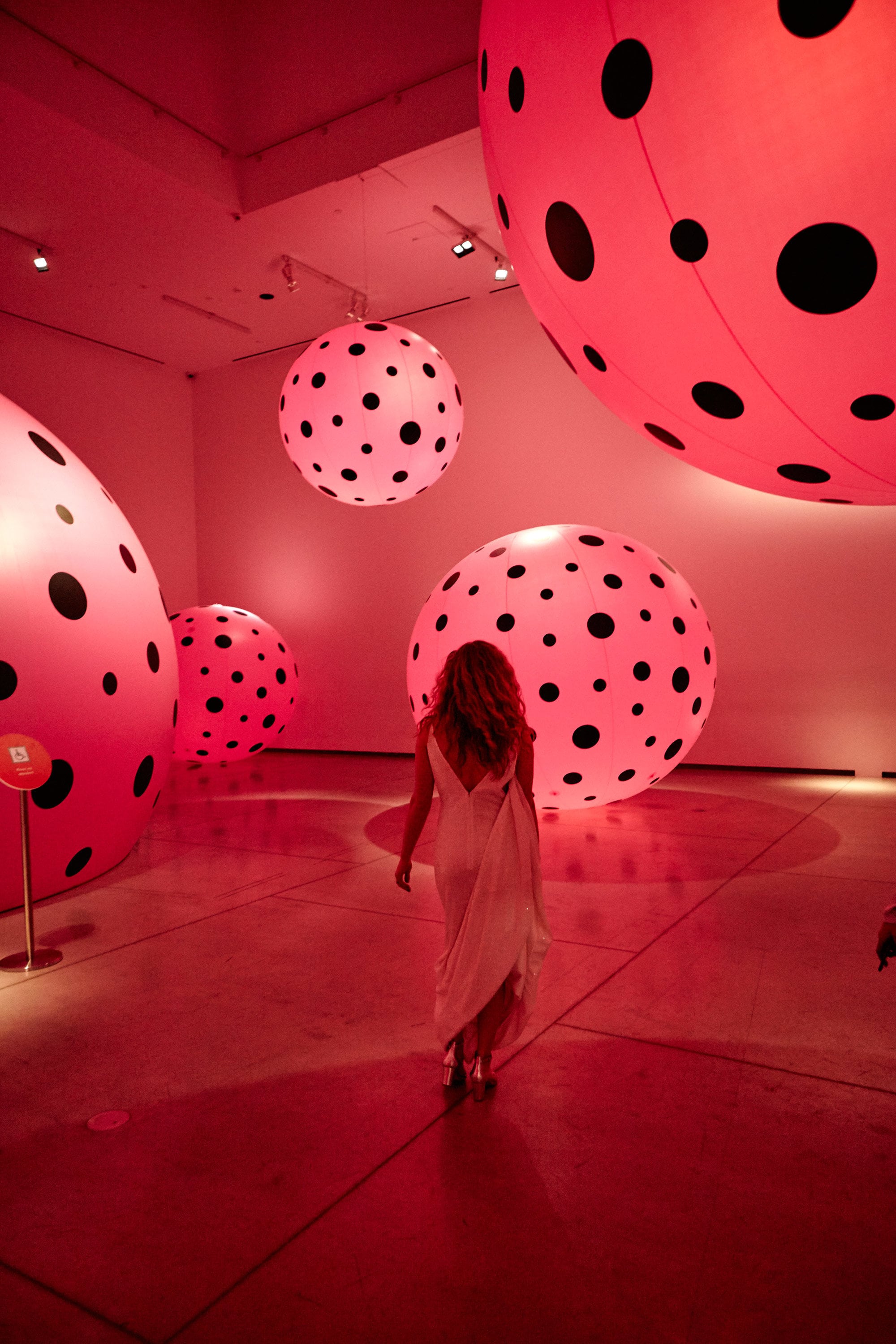 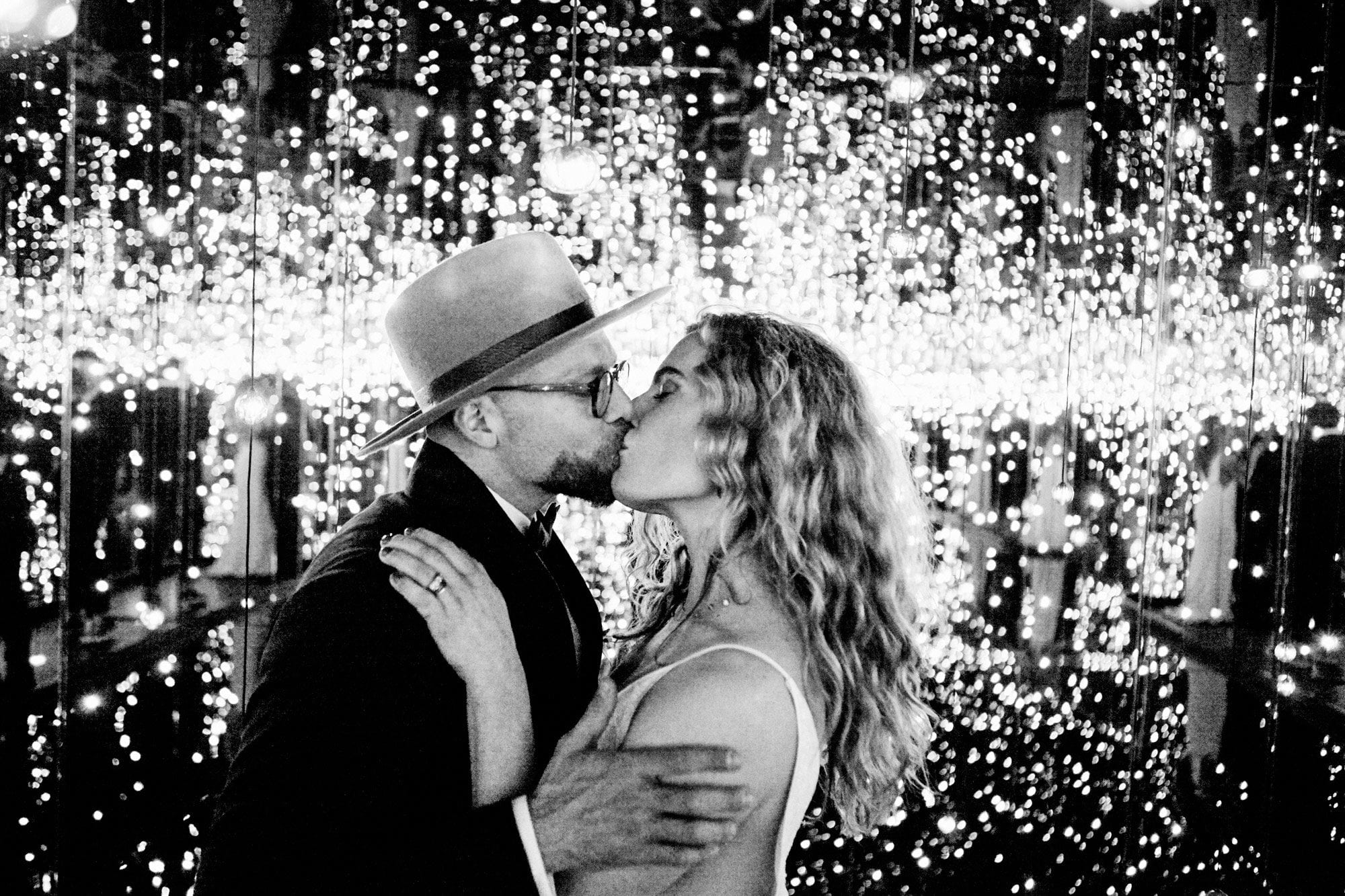 The night ended at the AGO Massive party with dancing and food, set against a backdrop of art displays. “Sharing the evening with so many friends, family, lovers and strangers was the absolute best,” Alistair says.