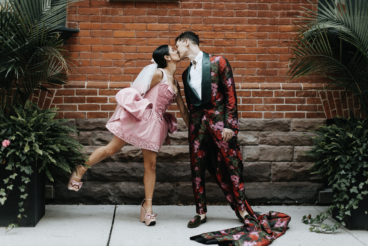 Shiran Teitelbaum and Mike Donaghey, both creative directors in the advertising sector living in LA, started planning their fashion show–inspired wedding celebration in 2019. Over two years of Covid delays, they had plenty of time to brainstorm even more extravagant surprises, like bringing in winged ballerinas to fly their five-month-old daughter down the aisle and hiring stunt doubles to perform their first dance. Here’s how it all came about. 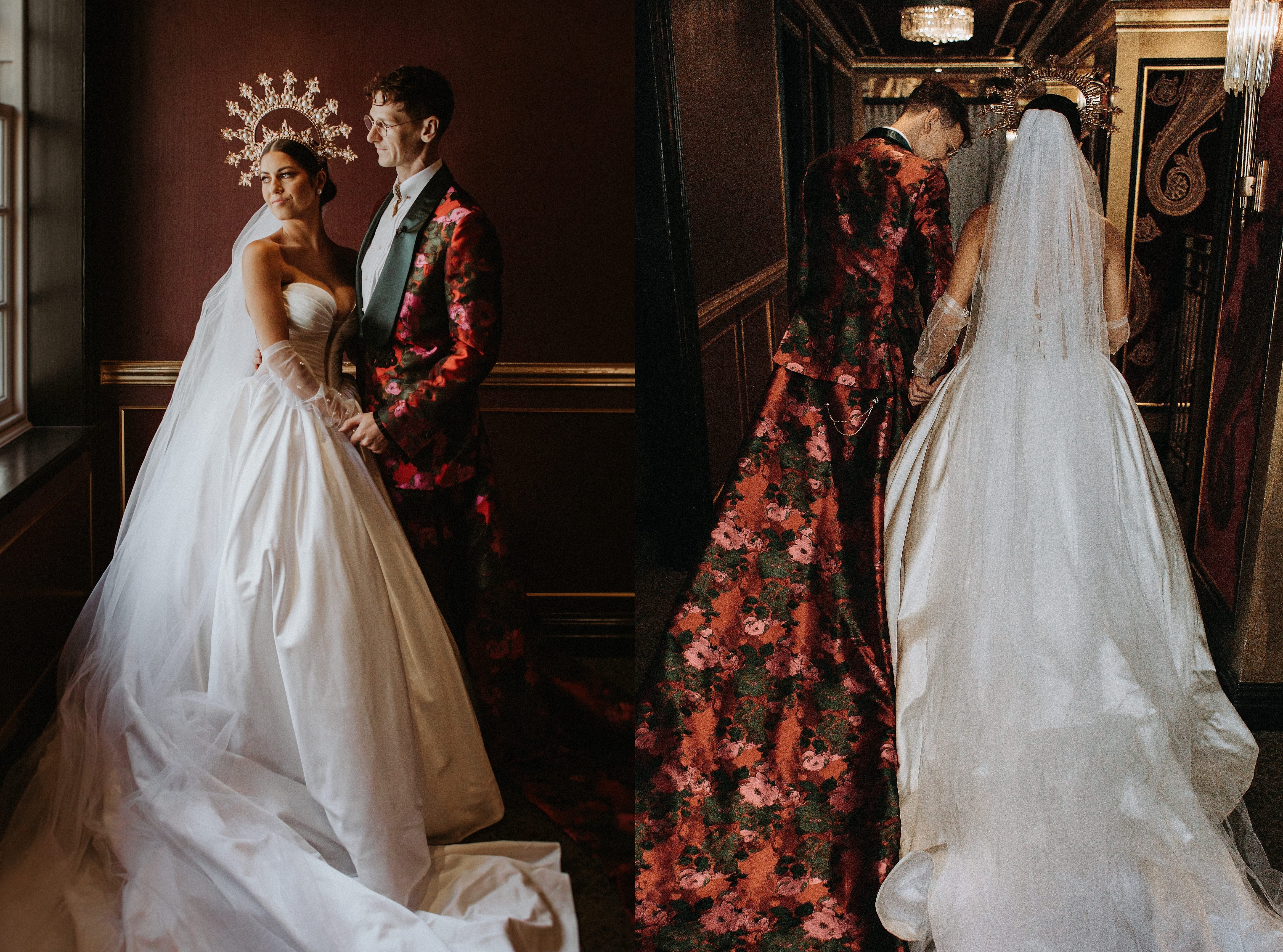 Mike: I’m from Toronto, and Shiran spent some time working there after going to McGill University, in Montreal–her father is Canadian. But we didn’t get together and talk until February of 2017, in the US, when I was living in New York and she was living in Los Angeles. Shiran and her business partner, Alice, were coming to New York for a photo exhibition that featured their clothing line, a cheeky Jewish brand called Unkosher Market. I’m friends with Alice, so the three of us were going to meet up for drinks. But there was a snowstorm and Alice’s flight was cancelled. Shiran had already flown in, so we ended up getting together anyway. I fell for her right away. She was so saucy and opinionated—that was all I needed.

Shiran: I was expecting someone fun but maybe slightly immature. Instead, I met Mike. He was very much a grown-up. He was so funny, thoughtful and outgoing, and our creative personalities just fit. He met my mom the night of our first date, and my dad on our second. Since my parents were in town for my exhibition and expecting to see me, there was really no other way to hang out with Mike without them meeting. I think my mom loved Mike even before I did.

Mike: After that trip we would fly to each other for dates. I would go to LA every three weeks, and she would come to New York. We did that for a year, but it was getting expensive. 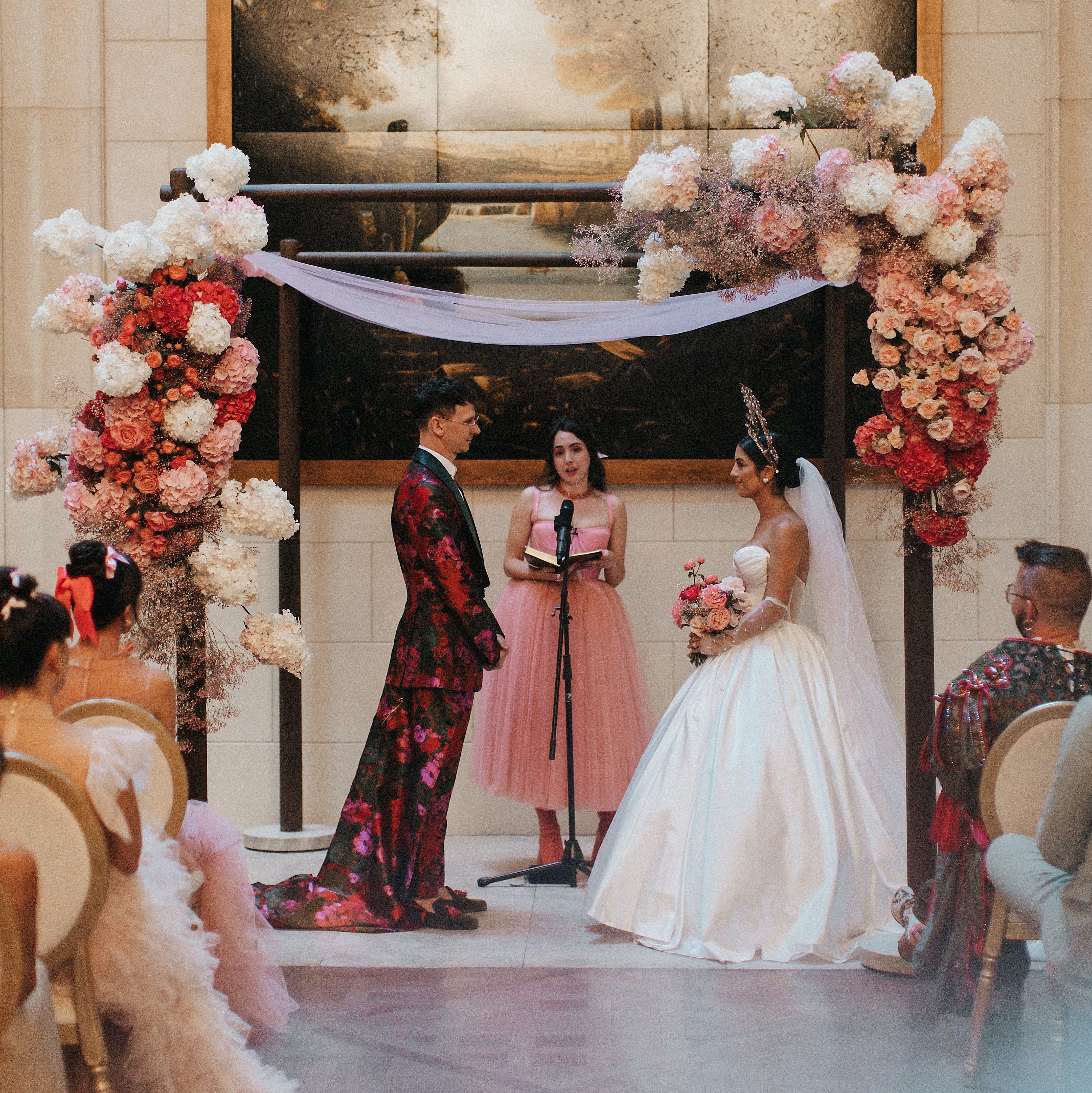 Shiran: So I moved to New York. I wanted my Carrie Bradshaw lifestyle anyway. I initially moved into Mike’s place in Brooklyn. Pink is my favourite colour, and he put pink surprises in every room to make me feel comfortable, including a pink Sonicare toothbrush and a pink minifridge stocked with pink drinks and snacks. But, after a month, I suggested we move to Soho so I could truly experience Carrie’s Manhattan. Mike proposed a year later, in 2019, on a trip to LA for my birthday. He told me we were going to an art gallery opening that evening, but when we got there, the gallery was packed with all of our friends, and the walls were decorated with photos of our relationship, with decals underneath describing our love story. It was so sweet and over-the-top. Our wedding eventually got delayed multiple times, so I was so glad we got to have an epic proposal in the beginning.

Mike: I was planning that night for months. Heidi Gibson, the designer who made Shiran’s custom ring, lives in LA, so I wasn’t able to pick it up until the day of the proposal. I lied to Shiran and told her I really wanted to see another art show I knew she wouldn’t be interested in and left to pick up the ring and set up the venue with one of her best friends and the gallery owner.

Shiran: We always knew our wedding would be in Toronto; we both love the city and still have friends and family there. Mike even has a tattoo on his arm with all his favourite things about Toronto, including a palm tree for the El Mocambo and a snail for the comic book shop Silver Snail. We chose our planner, Alana Klein of Swoon Events, and started brainstorming ideas with her.

Mike: We wanted a wedding that would be memorable to our guests. So many weddings end up being about just the couple, but we wanted to make our guests feel involved. We landed on a Met Gala theme, with the idea of making our guests feel like celebrities. We toured a bunch of different spaces, including warehouses and art galleries. 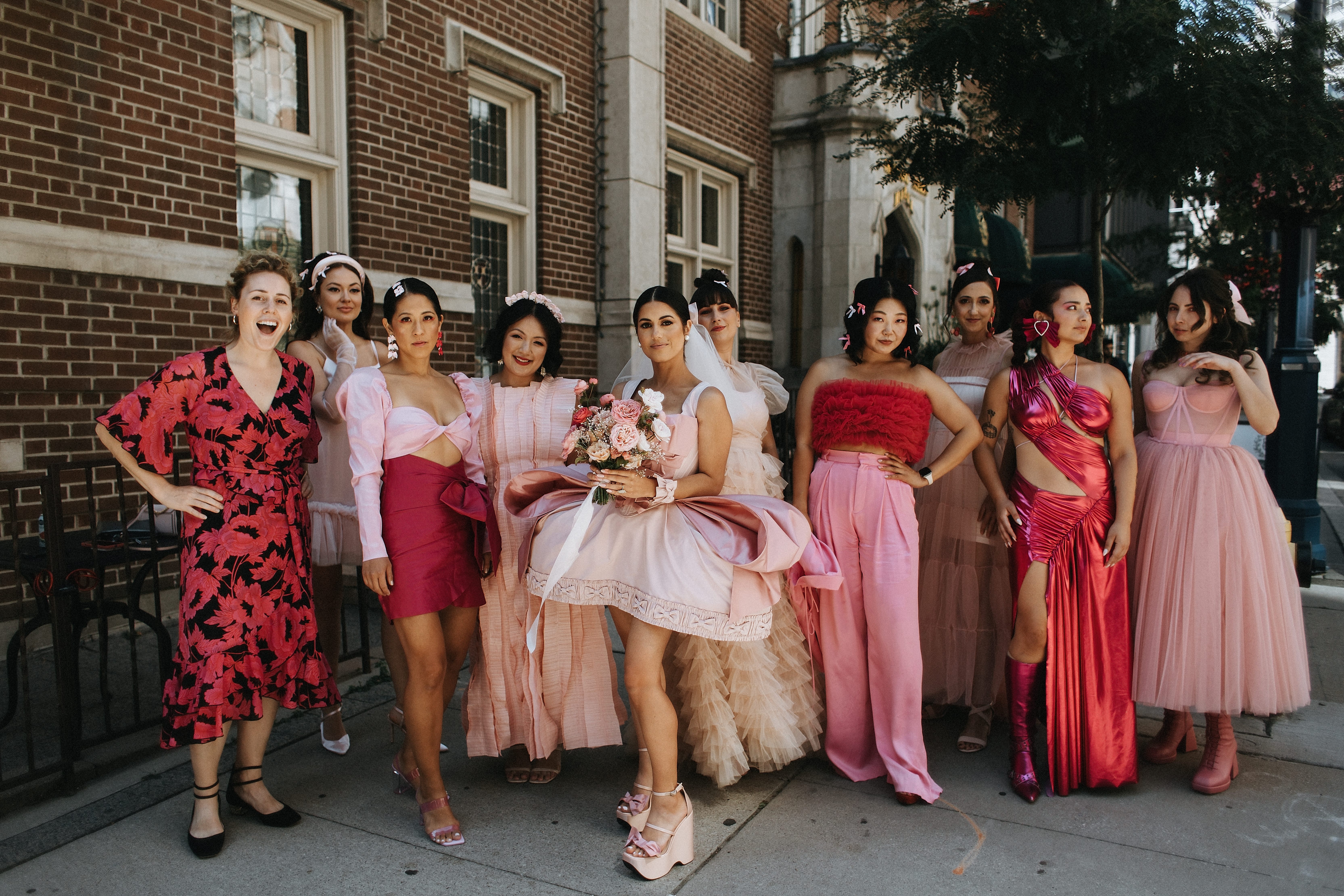 Shiran: We chose the Windsor Arms Hotel because it already had the look and vibe we were going for. It was colourful, with lots of ornate details. It reminded us of the homes in Bridgerton. The wedding was initially supposed to take place in May of 2020, so when the pandemic hit, we had already planned most of it.

Mike: We ended up sending out at least three different emails with three different official dates. It got embarrassing. Around that same time, I ended up getting a job with Apple in LA, so we both moved back. Shiran was thrilled because she missed it and would have likely convinced me to move back eventually anyway. While we continued planning our big celebration, we wanted to get married officially for legal reasons. So we went to Vegas and had Elvis marry us under the Welcome to Las Vegas sign. 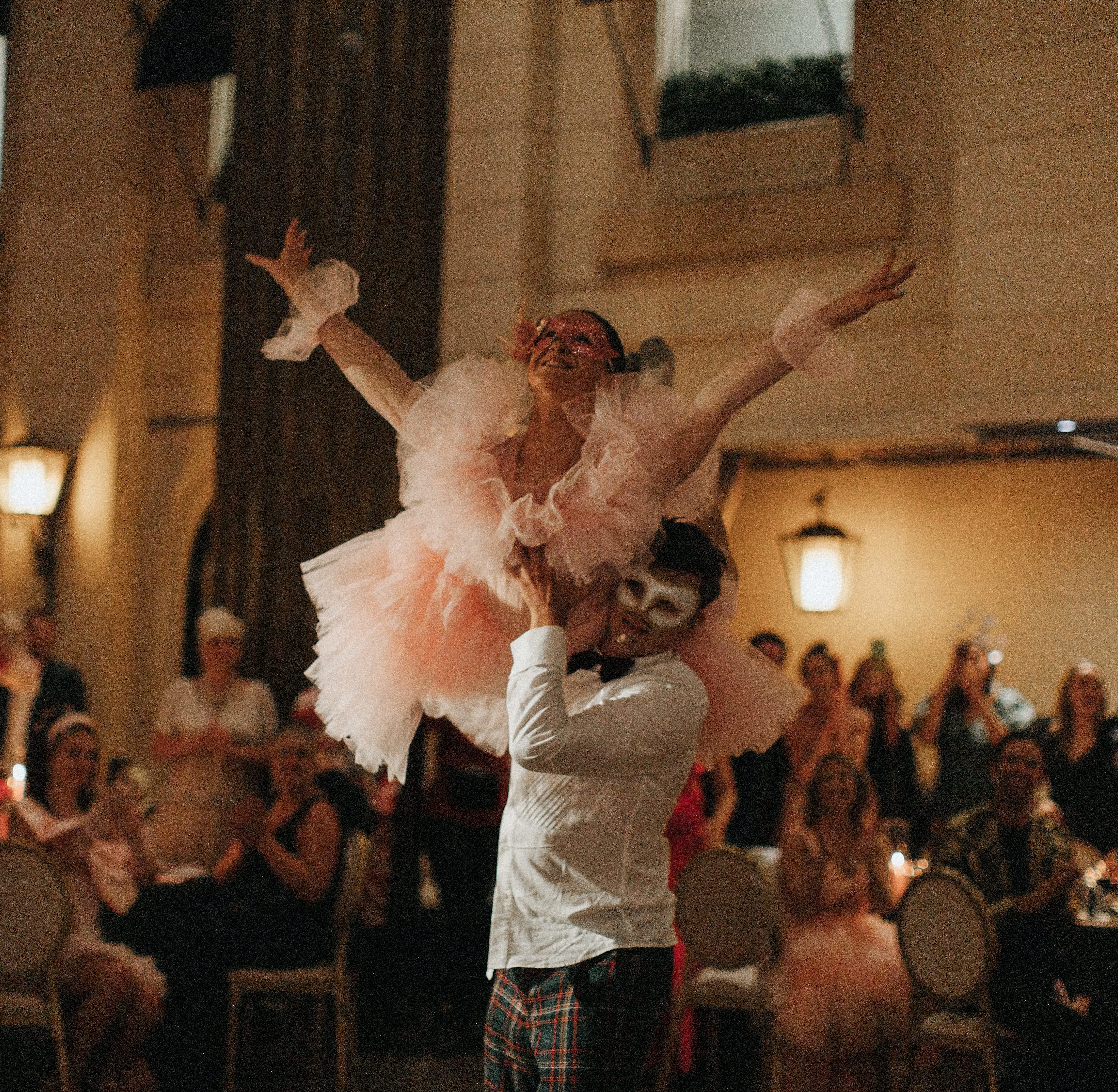 Shiran: We pushed the final date even further because we were having a baby by then. Our daughter, Winnie Donabaum—we combined our names for her last name since she’s our little collaboration—was born in March of 2022, and the wedding was in August. As we got closer to the final date, we started thinking about more ways to make the day as unforgettable as possible.

Mike: We always planned on having our bridesmaids and groomsmen put on a fashion show as they walked down the aisle for the ceremony, but we wanted something special before and after too. Before, we decided to have a strolling Marie Antoinette–inspired lady serving champagne off a table in the shape of a giant ball gown. Our wedding planner found a company that custom-made the dress for us. We also arranged for stunt doubles to perform our first dance. After just having a baby, neither one of us had the time to learn any dance routines ourselves—and we thought it would be a hilarious surprise for our guests. 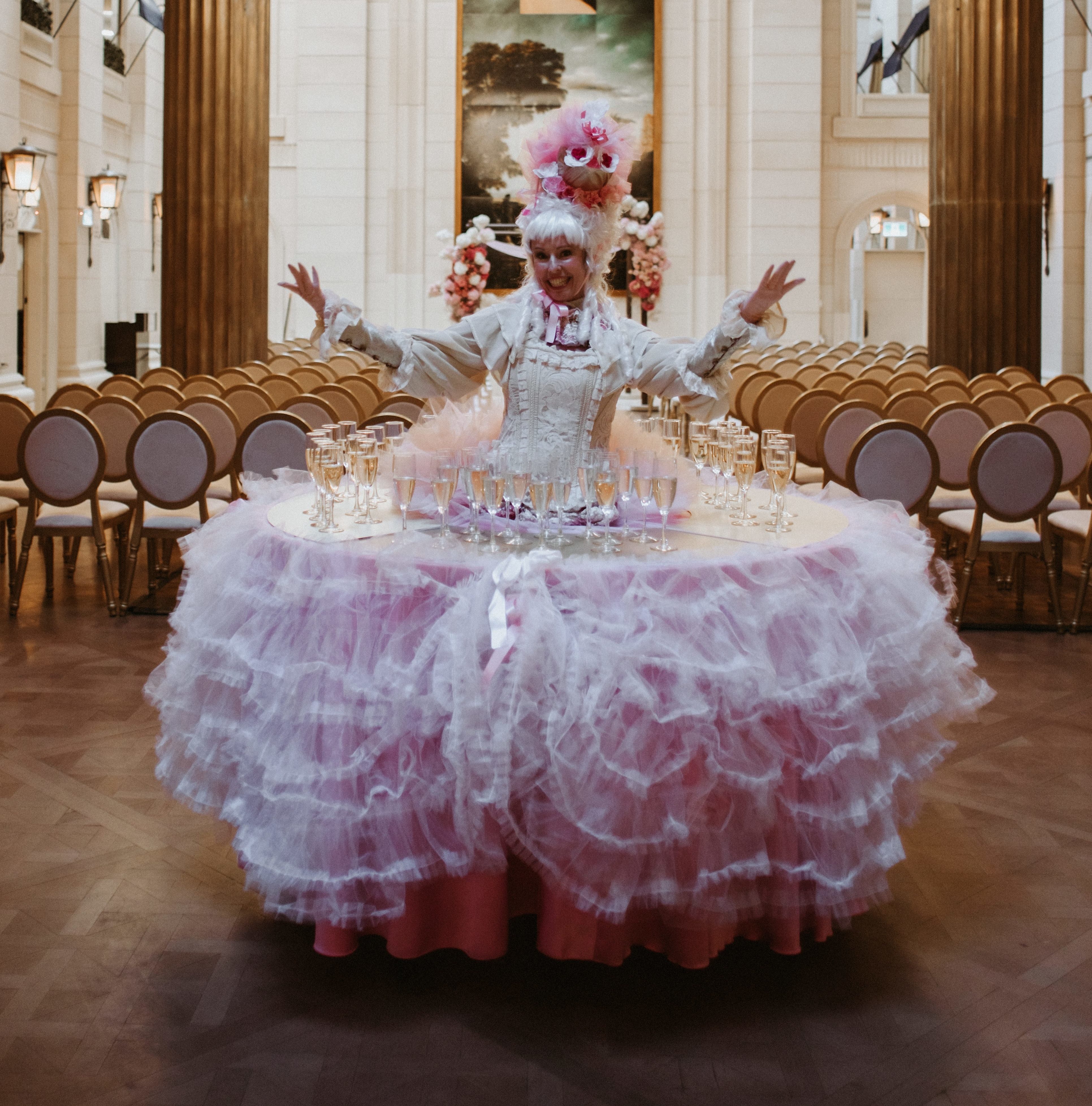 Shiran: I wore three dresses. The first gown was a white pre-loved Pnina Tornai for the ceremony that weighed like 20 pounds. I changed into a second one for the reception. It was short and pink. Mike sketched the design for it, with a ton of bows and wide hips, which was also very Marie Antoinette. He’d never designed a dress before but loves to try new creative things. For instance, he designed the wallpaper in our living room and made another sculpture in our home.We found a designer in Toronto, Rachel Kerby Couture, who was able to bring it to life. And the last one, with layers and layers of pink tulle—my stunt double wore the same one—I bought online.

Mike: I had a lot of fun with that design. Shiran is obsessed with bows, so I wanted to find a way to make the dress look like a big bow from above. I had never designed a dress before, but it was really rewarding—there might be a career change for me. I made a sketch for my look too. It was pretty wild and included a cape. I was originally emailing with the costume designers from Hamilton on Broadway to see if they could make it. I decided that a suit designer would be a better fit, so Alana hooked me up with Matthew Davignon in Toronto. We collaborated on a design that incorporated a long train, a shawl collar and ivory buttons hand-carved into roses. When we got to Toronto for the wedding, Matthew had kept the train 16 feet long so that we could decide on the length together. But we just kept it. The train was removable, so I was able to wear the rest of the suit for most of the night. For our guest dress code, we told them that, if they look like they’re going to a wedding, they’re wearing the wrong thing—they should aim to look like they’re going to a fashion show. When we kept having to push the date, we told people it was good news because it meant they had more time to work on their outfits. 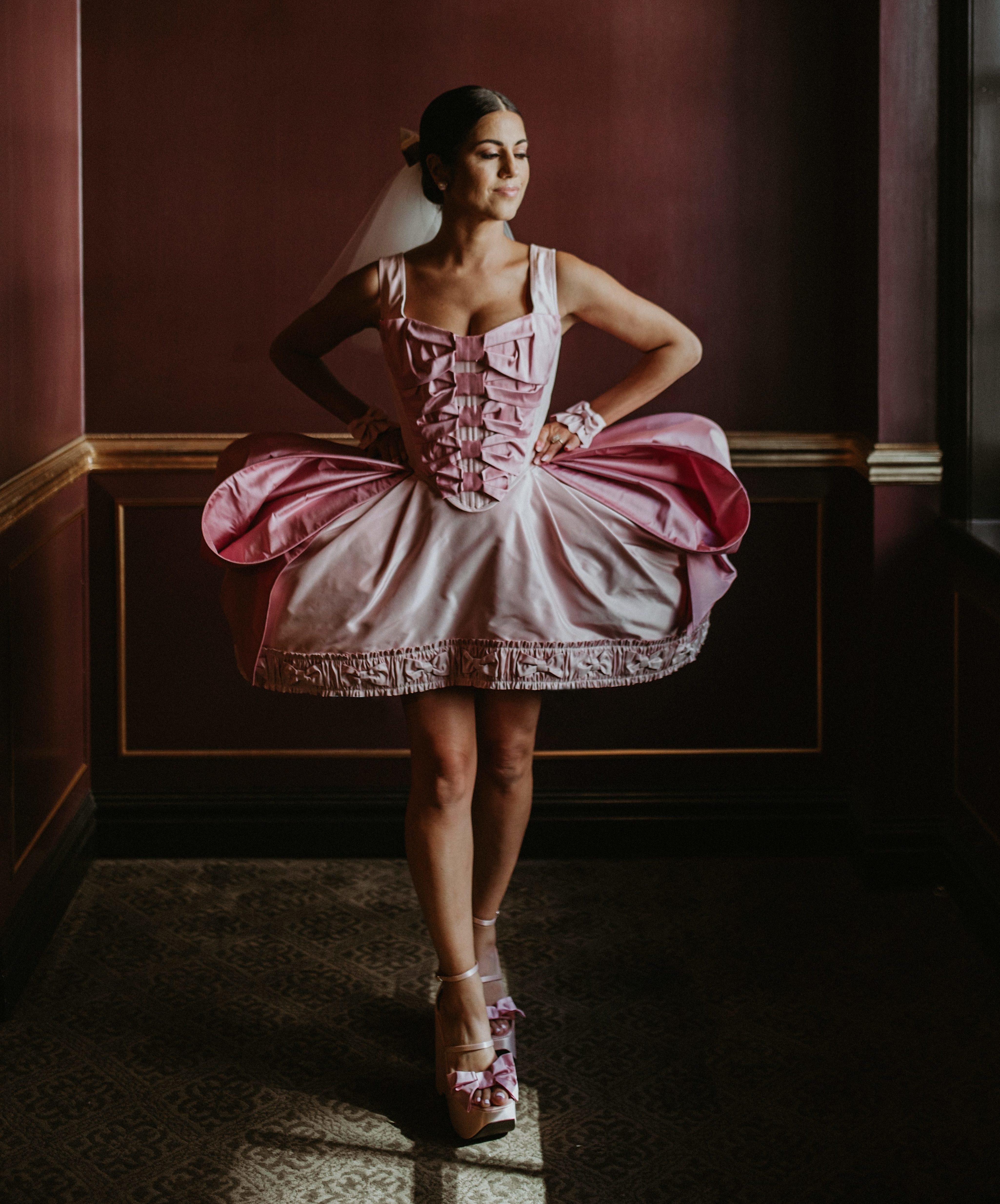 Shiran: Our guests would send us photos of what they were planning to wear, and our responses would be, “Do more!” On the day of the wedding, my girls and I got ready in a room at the Windsor Arms, and it really felt like we were in a fashion show. There were bows everywhere, people were glue-gunning earrings together. It was mayhem. The ceremony, which was organized as a fashion show, was always going to be the main event for us. We had our bridesmaids and groomsmen stand in the restaurant to the side of the ceremony space so that they could walk up the aisle, strike a pose for the cameras, and then walk back down to the ceremony location, where we had set up a floral chuppah. That flower arrangement was also inspired by Marie Antoinette—her wig, to be exact. 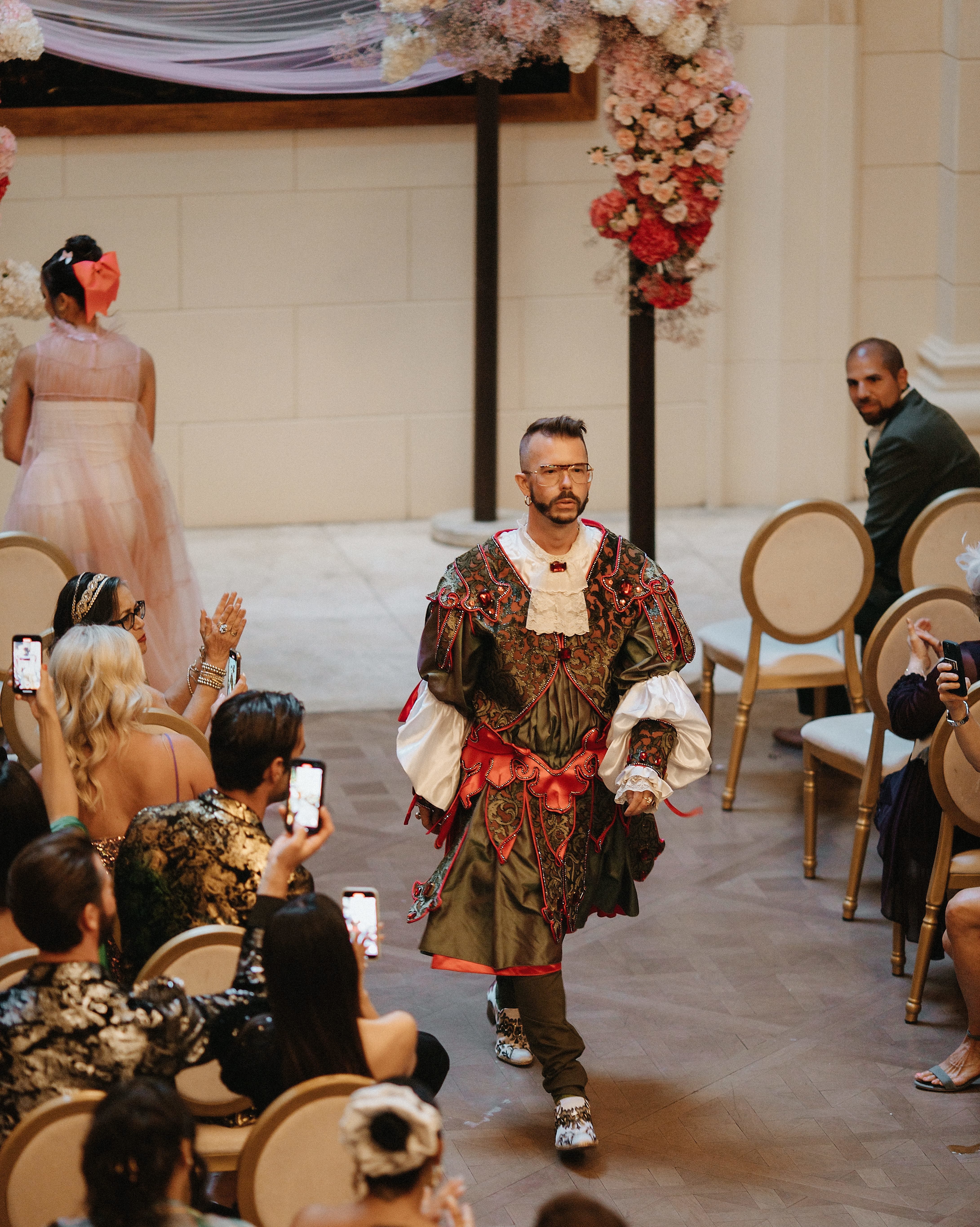 Mike: We had a choreographer there to time it all out and orchestrate Winnie’s entrance with the two ballerinas. We wanted her to have her own dramatic moment. Everyone told us that was their favourite part of the wedding. And I admit it was beautiful. I may have cried. Our friend Alex was our officiant. We wrote our own vows but had Alex read them because Shiran was worried about stage fright. We each surprised the other with one vow that the other didn’t know about. Mine included a line about Shiran promising to restock the toilet paper—even though she had never done so up until then. 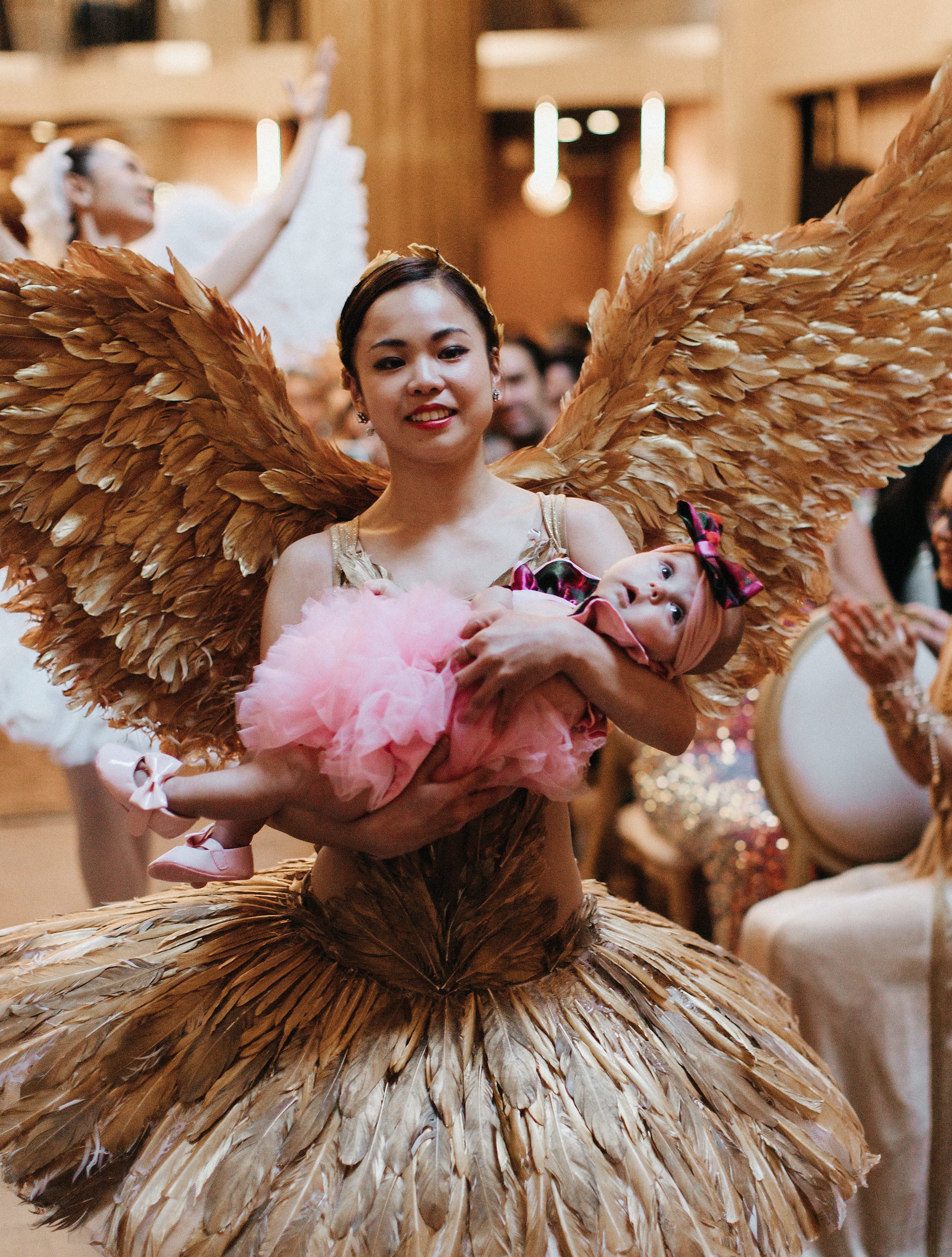 Shiran: For cocktail hour, we wanted our guests to feel like celebrities, so we had one of my bridesmaids show up with a microphone and conduct mini interviews. I think that made everyone feel really special.

Mike: We are lucky to have a lot of creative friends, so we also hosted an art show during the cocktail hour, called ‘Til Death Do Us Part. It was filled with death-themed love pieces, including an eerie floral triptych and a sculpture of a gold skeleton holding a pink heart. A few of our friends are DJs, too, so we had three different people working the decks during the reception. 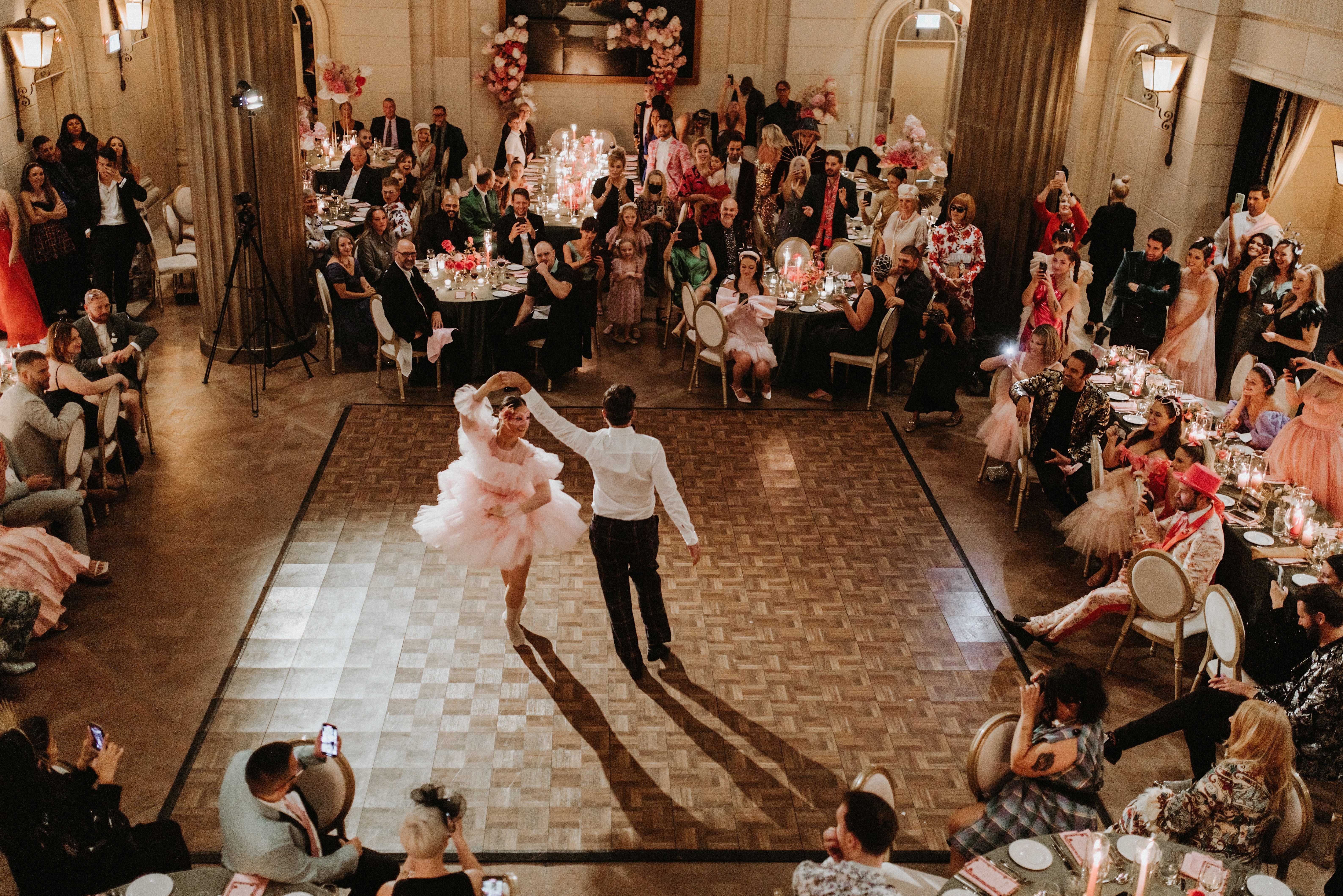 Shiran: After dinner we served late-night poutine to give our American guests a taste of Canada. One of my favourite moments was watching our guests’ reactions during the stunt double dance. We were hiding in the next room, peeking in, and it took people about a full minute to realize they weren’t actually watching us.

Mike: I found the vows to be really powerful. We had been married for two and a half years by that point and had a baby, so I didn’t think they would matter as much as the other elements of the wedding. But it surprised me how one of the simpler, more traditional moments was actually the most special. And to celebrate our union with our family and friends after so much time apart was magical. 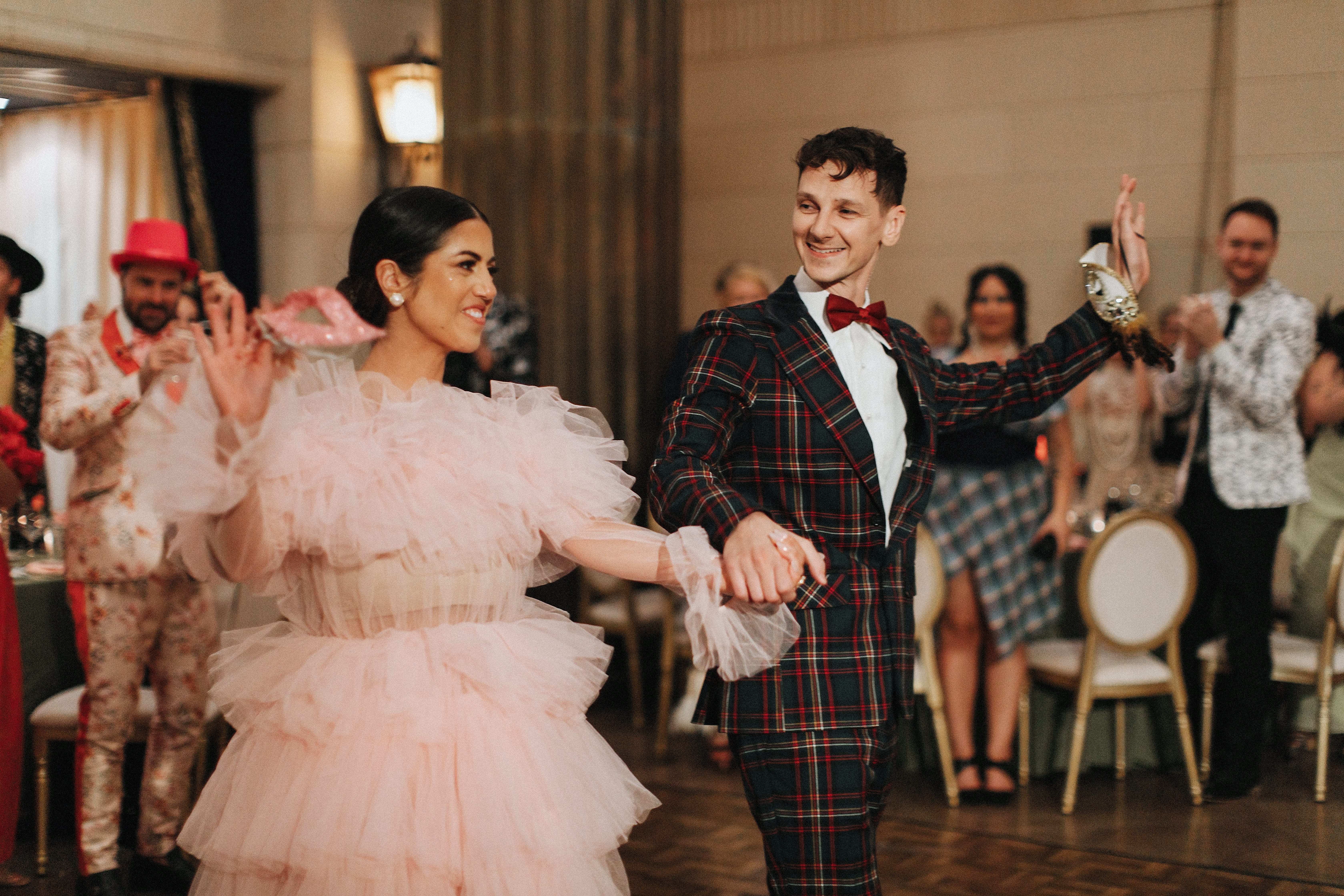 Shiran: While we didn’t plan to have our wedding two years after getting legally married and having a baby, getting to have Winnie be a part of the day was an amazing family experience that we will always cherish. Now that we’re done with wedding preparations, we’re working on making Winnie’s first birthday just as memorable.