I usually wake up around 9 a.m. and lie in bed on my phone for half an hour, looking at Instagram or contacting friends on Snapchat. I’ve reconnected with a bunch of friends I’d fallen out of touch with. They’re so bored that they’re messaging everyone on their contact list.

Then I shower, get dressed and go downstairs for breakfast. My parents and sisters are usually all down there, since they wake up super early. I’ll make myself scrambled eggs since that’s pretty much the only thing I know how to make. I use my favourite mix of spices—cayenne pepper, cajun spice, garlic powder and salt. A bit of butter and milk, too. Well, I can also make Vector cereal. We ran out of regular milk, so I’ve been eating it with oat milk lately, but it’s not my favourite. 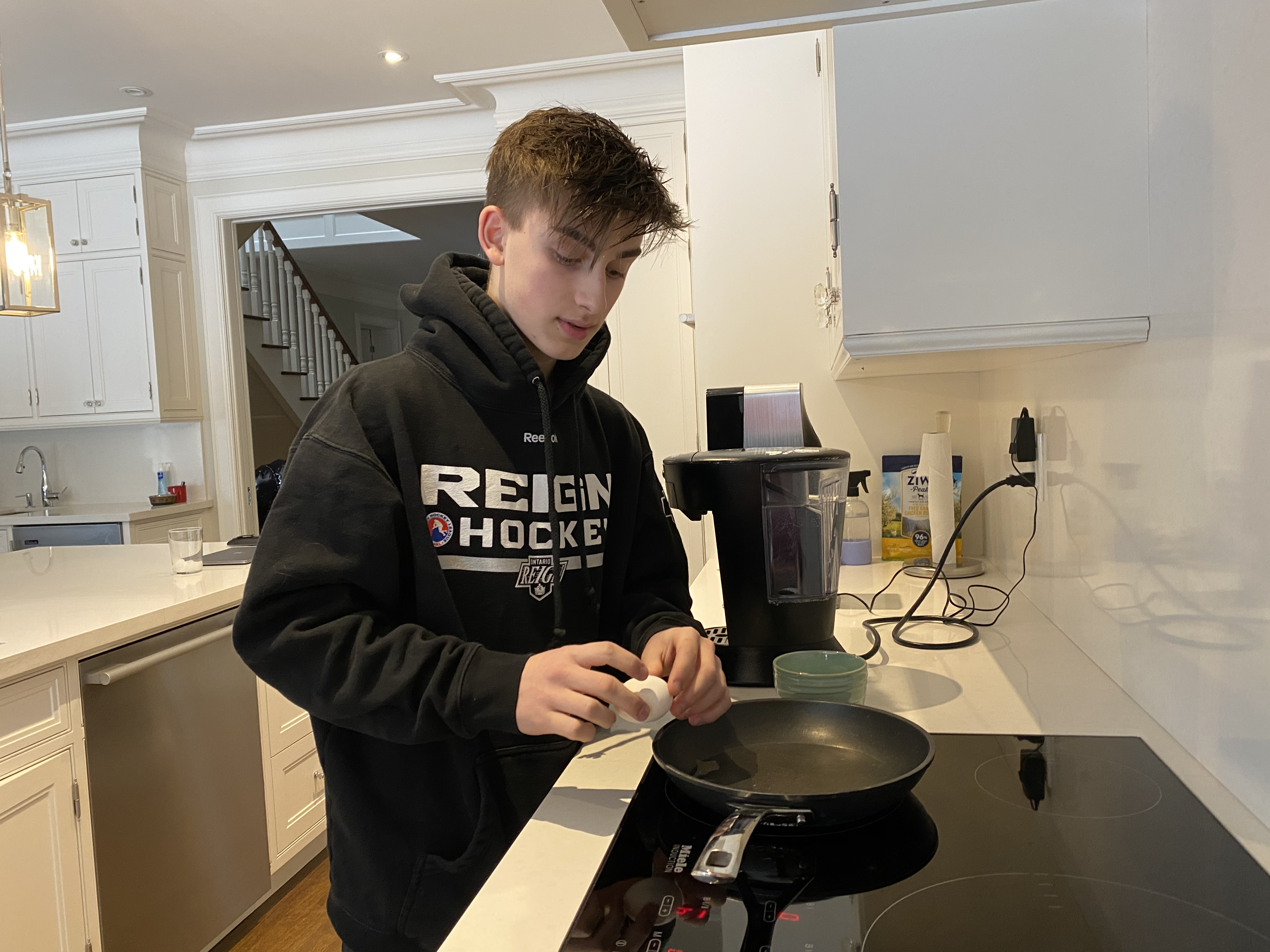 After that, I’ll go upstairs and vlog. I’m making a quarantine series in which I talk about what I’m going to do that day. The other morning, I decided I’m going to try to grow a moustache, so I told the vlog that. But to be honest, I can still count the hairs. I’m probably gonna have to wait a couple of years before the full ’stache comes in.

I’ll have lunch. Right now, it’s usually something crazy, like chicken and crackers. I put literally the exact same spices I use for eggs on some chicken breast and eat that with saltine crackers on the side, since we have those in bulk for some reason. When I’m not talking to my friends and playing Call of Duty, I’m writing lots of music. It’s the perfect time to be creative, since I’m stuck at home with so few distractions. I’m not writing about the quarantine, though. I think the situation is a bit too hard to write about, because it’s such a sensitive topic.

When I write, I normally sit with my guitar and a computer. I’ll record guitar and some vocals into software—I use FruityLoops—and add some effects, like a kick drum or a snare. I write whatever comes to mind, whatever I’m feeling that day. Like, even though I’m not writing about quarantine, it’s definitely still influencing my work. I’m just writing slower stuff, trying to chill out. It’s like free therapy.

Sometimes, when I run out of inspiration, I’ll try to make up a story, close my eyes and imagine a different world. It’s like writing a story for English class, except then you have to give it cohesive lyrics and a melody. My inspiration mostly comes from life. There’s so much to write about. I’ve written multiple songs about the same time period, person and relationship. This girl and I, we were never officially dating, but it was a thing. It’s complicated. So much goes unsaid between people. Even that’s a good concept: what goes unsaid. My creative process is simple, I guess. I just pick a topic and let my imagination run wild. 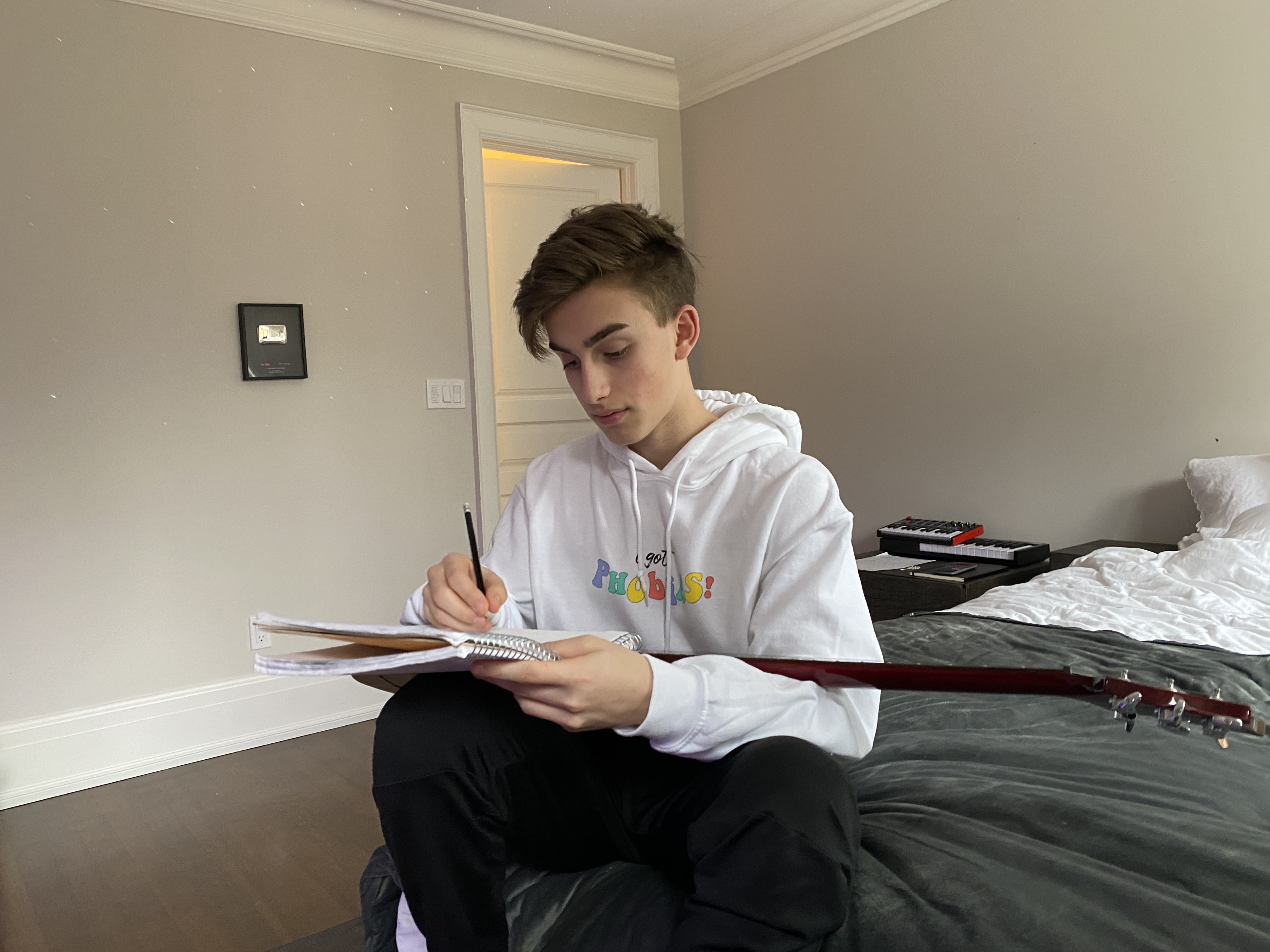 Here’s a lyric I wrote recently: I get lost thinking about all the things I have to be for you. That lyric is partially about a girl, but also it’s about the world and all the expectations I put on myself, and the expectations it puts on me.

Every day, at 3 p.m., I livestream on Instagram for about 45 minutes. That’s an amazing way for me to connect with my fans and react to their questions and comments. Honestly, being on social media is also helping me keep up with my friends right now in a way that I normally don’t have time to. Like, I basically spent last year in isolation writing music. And now I’m spending all this time in isolation catching up with people, which is unusual, because I’m usually oblivious to what’s happening in the social scene at my high school. I’ve really been trying to stay connected to my friends and fan base, and I’m super grateful to social media for letting me do that. A lot of fans ask what I’m doing in quarantine. Everybody’s just trying to figure out what to do and how to feel. There are also questions like “Do you have a girlfriend?” So it’s definitely a mix. I don’t have a girlfriend, by the way.

Then my whole family goes for a walk. Our house borders a golf course, so we go for walks around there and let the dogs run around. We have two little Maltese dogs, Bentley and Leo. I also recently bought a zipline, so I’m gonna set that up somewhere. Got a baseball bat too, so I’ll get my dad to throw balls at me and see how far I can hit them.

My whole family sits down to have an early dinner around 6 p.m., and we try to drag it out for as long as possible, usually until 8:30 p.m., just so we have something to do. Recently, it was chicken fingers and chicken salad. I had some chocolate milk, too. Cooking is a collaboration between my mom, my dad and Madison. My two older sisters are really good at baking. Like, right now, there’s a competition in my household for who makes the best banana bread. Madison is winning. I keep telling Darian that hers is too dry. 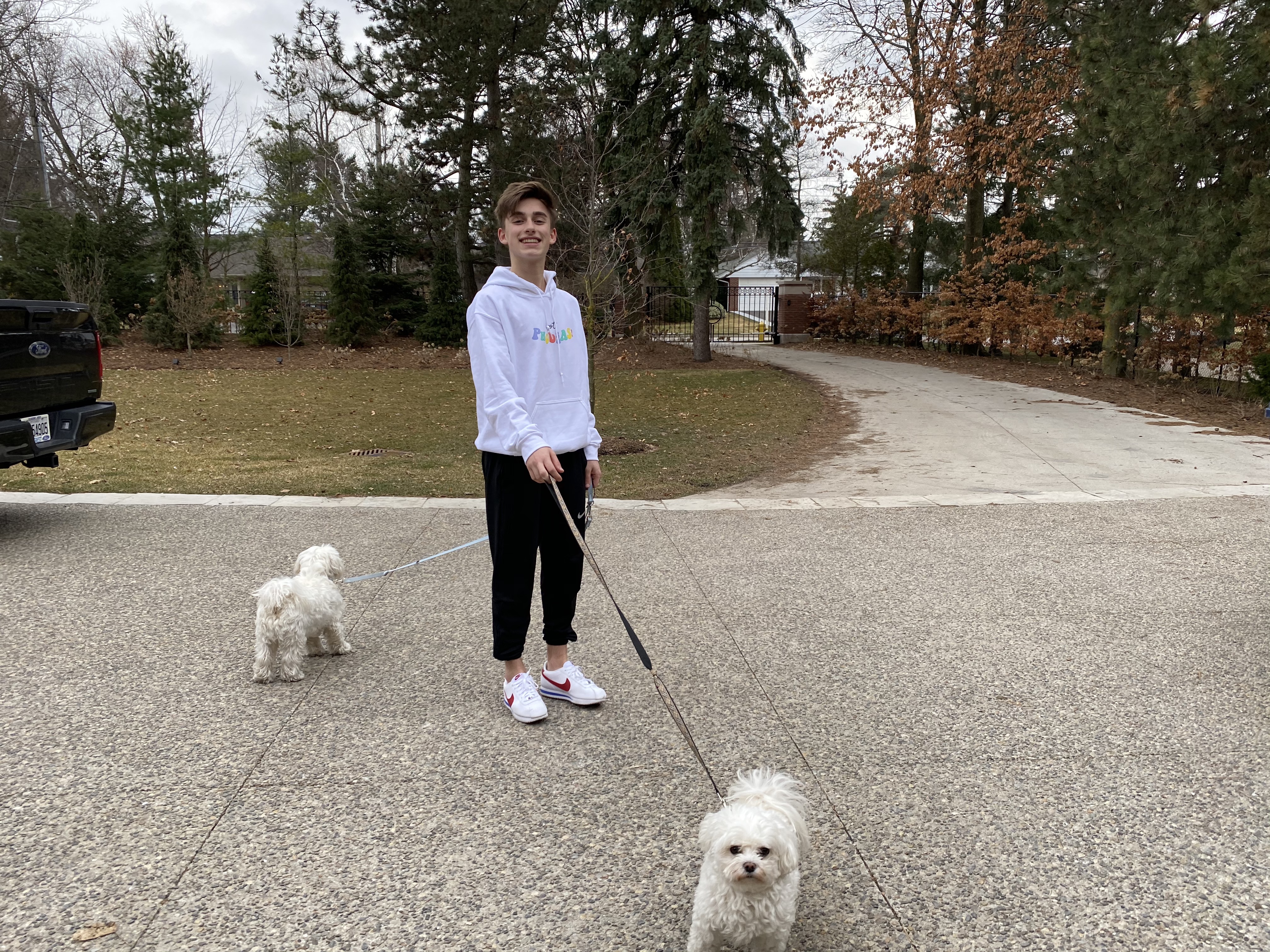 We’ll talk about news of the outbreak, what people are saying, what’s going to happen. I mean, we’re already kind of in lockdown, except essential services. I just hope we can all stay inside and practise social distancing so this doesn’t escalate. I’d still like to have a summer this year. Maybe they’ll invent a vaccine soon, or the virus will just die out because everyone’s staying at home.

After that, I watch Ray Donovan with my parents. I’ve also watched Trailer Park Boys all the way through twice in the past month. I’ve never been so bored in my entire life. I’m trying not to panic. I know social distancing is a great way to relieve stress on the health care system, so I’m staying inside and avoiding contact. There’s a lot of hysteria right now, and I don’t want to feed into that, but I also know that it’s very serious. I’m just focused on staying safe and healthy.