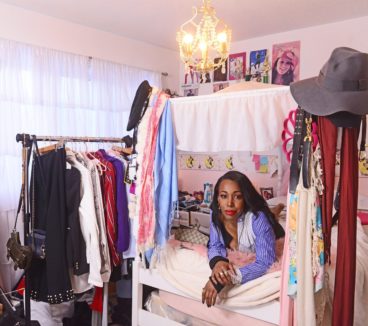 Priced out of the soaring housing market, many Canadian millennials are moving back into their childhood bedrooms. An intimate look at the perks and pitfalls of living with Mom and Dad

As told to Christina Gonzales | Photography by Dave Gillespie | February 26, 2018

The trajectory of young adulthood used to be straightforward: finish school, find a job and move out on your own. But in 2018, millennials face unstable employment, record-level student debt and a rental market where a one-bedroom apartment costs $2,000 per month. For many young Torontonians, the only option is to live in their childhood homes. According to the latest census, roughly 42 per cent of Ontario adults between the ages of 20 and 34 currently live with their parents. At home, they can save on rent and food, pay off debts, and maybe even squirrel away enough cash to make a down payment on a house someday. In exchange, they often have to give up their privacy, be home by curfew and sleep in bedrooms decorated by their teenage selves. Here, five young adults describe what it’s like to live under their parents’ roof. 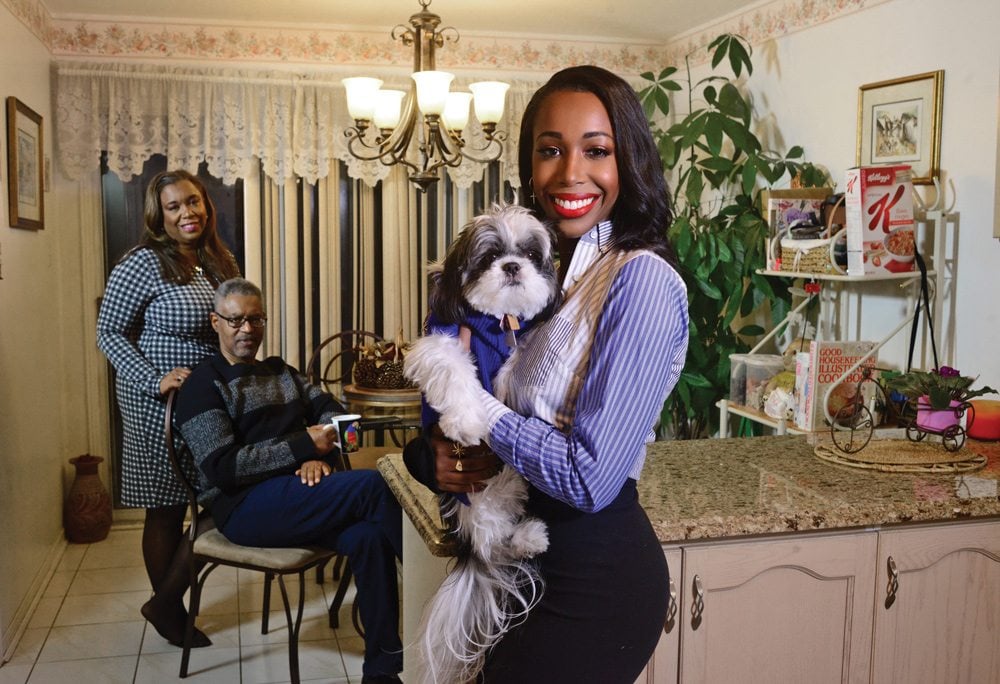 OLIVIA JORDAN LEWIS, 27, retail associate and fashion blogger
Her income: $30,000 per year
Her parents: Kathy Hope Lewis, 61, and David Lewis, 63, both retired accountants
The place: A four-bedroom house in Mississauga

Olivia: I lived at home until 2011, when I landed an internship at a fashion house in Manhattan. The opportunity came out of the blue, and I wasn’t prepared financially. I lived in a dormitory run by nuns. My parents paid my rent, which was about $1,000 a month. I was so grateful for their help.

When I came back to Toronto, I moved back home. I wanted to become a fashion stylist, but I eventually ­realized that my dream probably wouldn’t materialize in Toronto. I started a fashion blog and began working in retail, first at Holt Renfrew and later at a shoe boutique at Yorkdale. My parents are happy as long as I’m working. Sometimes, my dad even drives me to work. Transit to Yorkdale is a nightmare.

I don’t think my parents want me to leave—my older brother died three years ago, and they’d miss me if I moved out. We live in a four-bedroom house in Mississauga. It’s big enough that we’re never in each other’s way. The mall closes late, so I’m often not home until after 11 at night. Whenever I crash at a friend’s place, my parents will text me the next morning to make sure I’m okay. 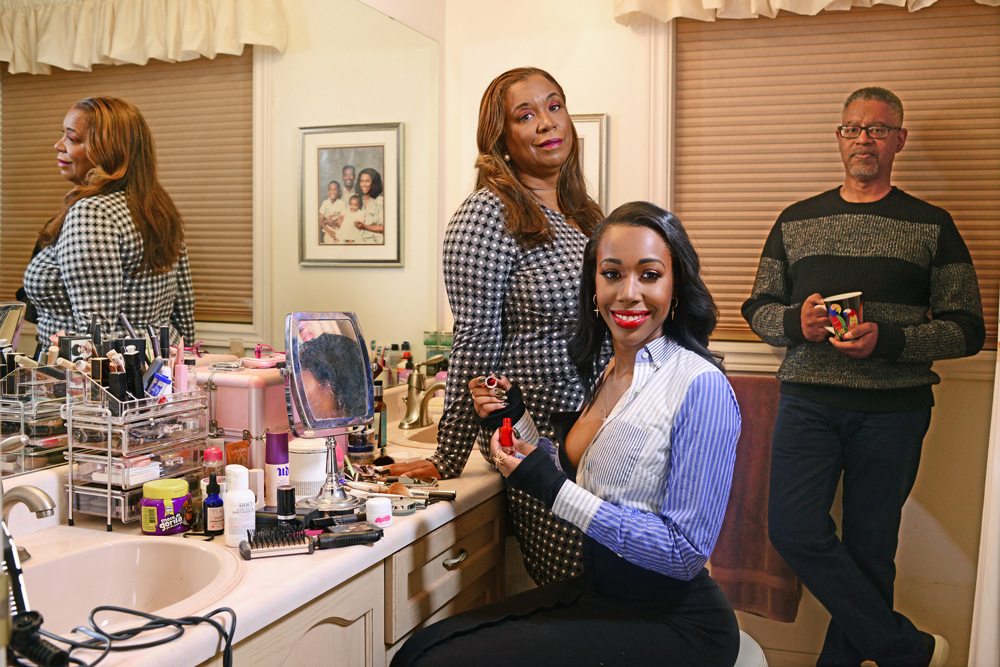 I wouldn’t be able to maintain my current lifestyle if I rented a place downtown. Every year, I buy a new designer purse for about $1,500, and I go to New York Fashion Week, which costs about $1,000. I also have a Soho House membership, which costs $1,800 a year—it’s essential for networking.

In 2014, I went back to school for broadcast journalism. I’m hoping to land a job in journalism downtown. I’ll move out when I do, but I know my mom isn’t going to be happy about it. Right now, I’m building my resumé. I have $1,500 in credit card debt. I also put about $200 into a savings account every month. I’ll probably use my savings to pay for first and last months’ rent once I find an apartment. I’m open to having roommates. 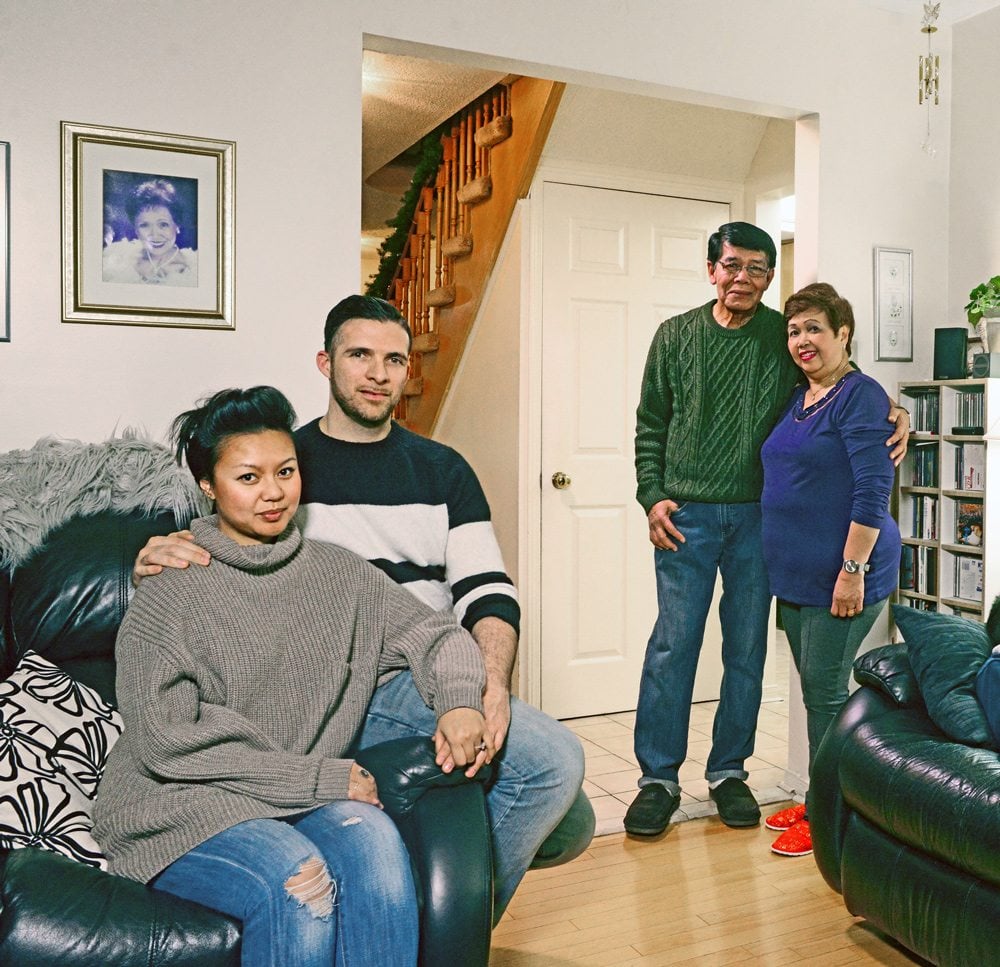 Lesley: In 2012, my boyfriend, Chris, and I decided to move in together. We quickly realized it didn’t make sense to rent a place. I was still finishing my undergrad at U of T, and Chris was thinking about going back to school. He owned a house in Whitby, but it was becoming too expensive for him to maintain. He eventually sold the place. He made $15,000 off the sale, put half of the profits into a savings account and used the other half to pay back credit card debt.

My parents agreed to let Chris move into our family home. There’s no shortage of space: the house is 2,900 square feet with four bedrooms. Our wing has a bathroom and two bedrooms. We clean our area, and my parents take care of theirs as well as the rest of the house. Chris does most of the outdoor chores, like raking the leaves and shovelling snow. My dad is getting older, and his knees are bad.

We’re saving money for our wedding in Maui this August. It will cost about $19,000. We also have $12,000 in credit card debt, which we hope to pay off before the wedding. We put $3,600 each month toward debt repayments and saving for the wedding, and we already have $10,000 saved. We’re grateful that my parents don’t ask us to pay rent, so we try to take them out to nice meals every few weeks. Sometimes, my mom will ask us to buy groceries, or cover the hydro or Internet bill. We do it, no questions asked. 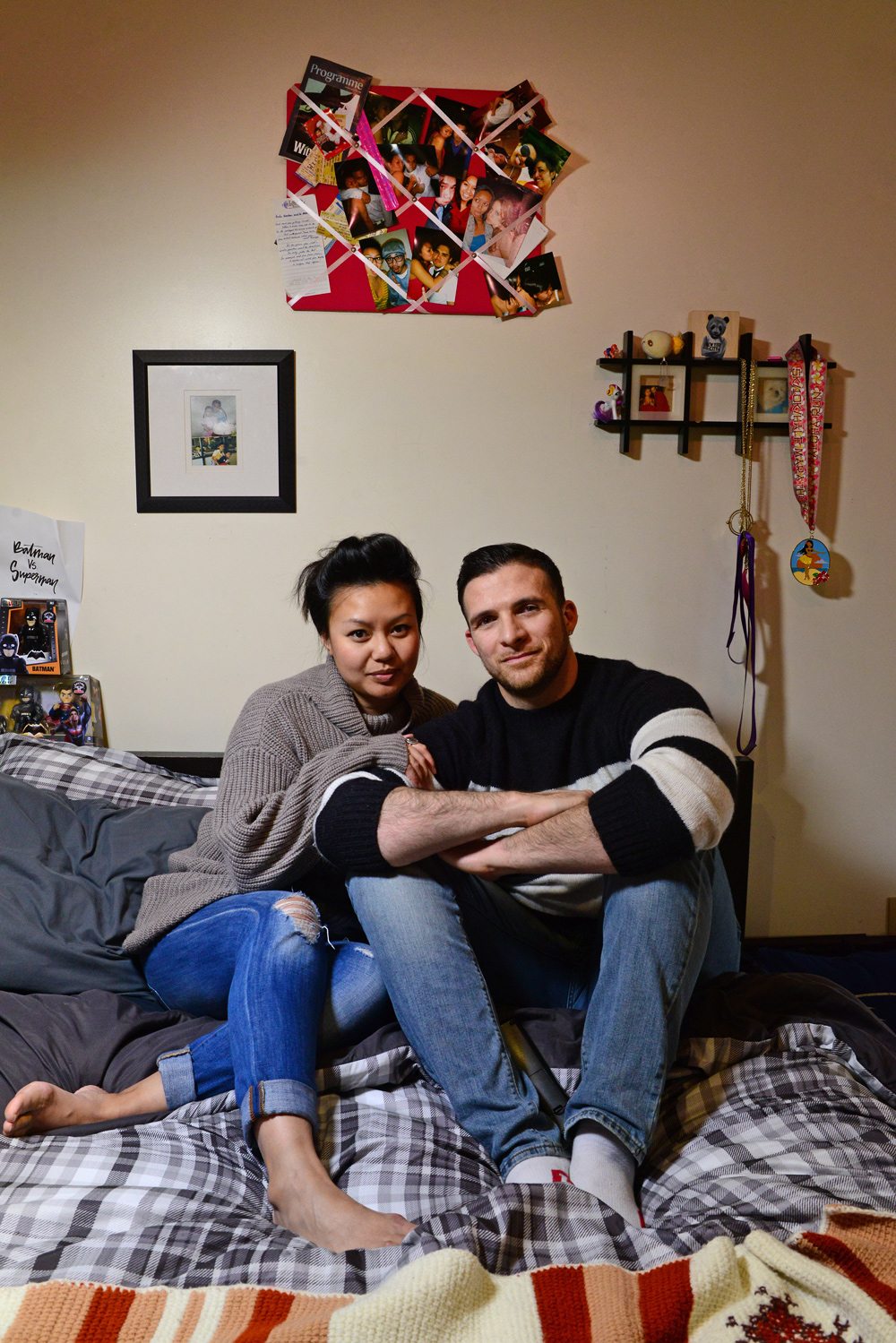 When my brother got married in October 2016, my dad asked Chris to leave for a couple of days while family visited. He’s very conservative, and he didn’t want family to know about our living situation. I told him that if Chris had to leave, I’d leave too. We rented a friend’s place in Stouffville for two weeks. It was irritating, but ultimately, it’s their home.

We don’t plan to move out any time soon. We don’t want to acquire more debt. My parents plan to renovate the basement in a couple of years, so we can live there. Ideally, we’ll inherit the house. Buying a house in Toronto isn’t a realistic goal. 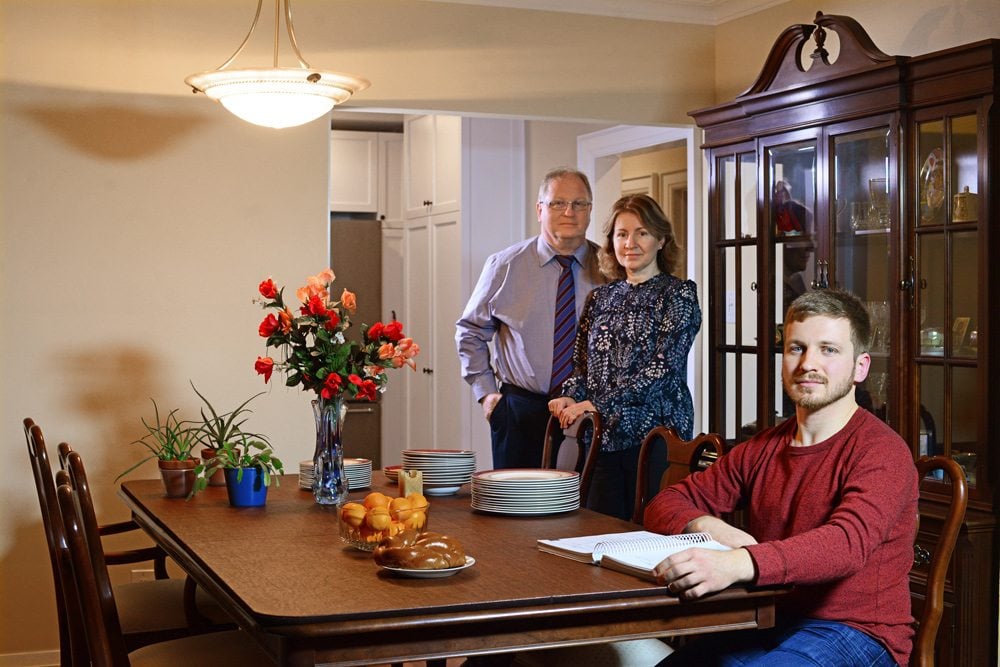 Daniel: My parents supported me through university. I have ADD, which made it difficult for me to keep up. In 2012, halfway through my third year, I dropped out of school and moved back home. My parents were devastated. They’d always assumed I would take over my dad’s accounting practice one day.

To make money, I worked full-time as a busser at Mill Street Brewery’s beer hall in the Distillery District. I realized that I was good at working long hours on my feet. I knew there was high demand for people in the trades, so I enrolled in a pre-apprenticeship electrician program at the Skilled Trades College of Canada, which cost about $8,000. My dad paid for it—he was happy I’d found a new career.

By now, I’m used to living with my parents. My girlfriend stays over on weekends, and we often have to tiptoe around my mom and dad. They watch a lot of television every evening, and there’s only one TV, so we have to ask if we want to watch something else. Otherwise, I have a lot of space to myself. 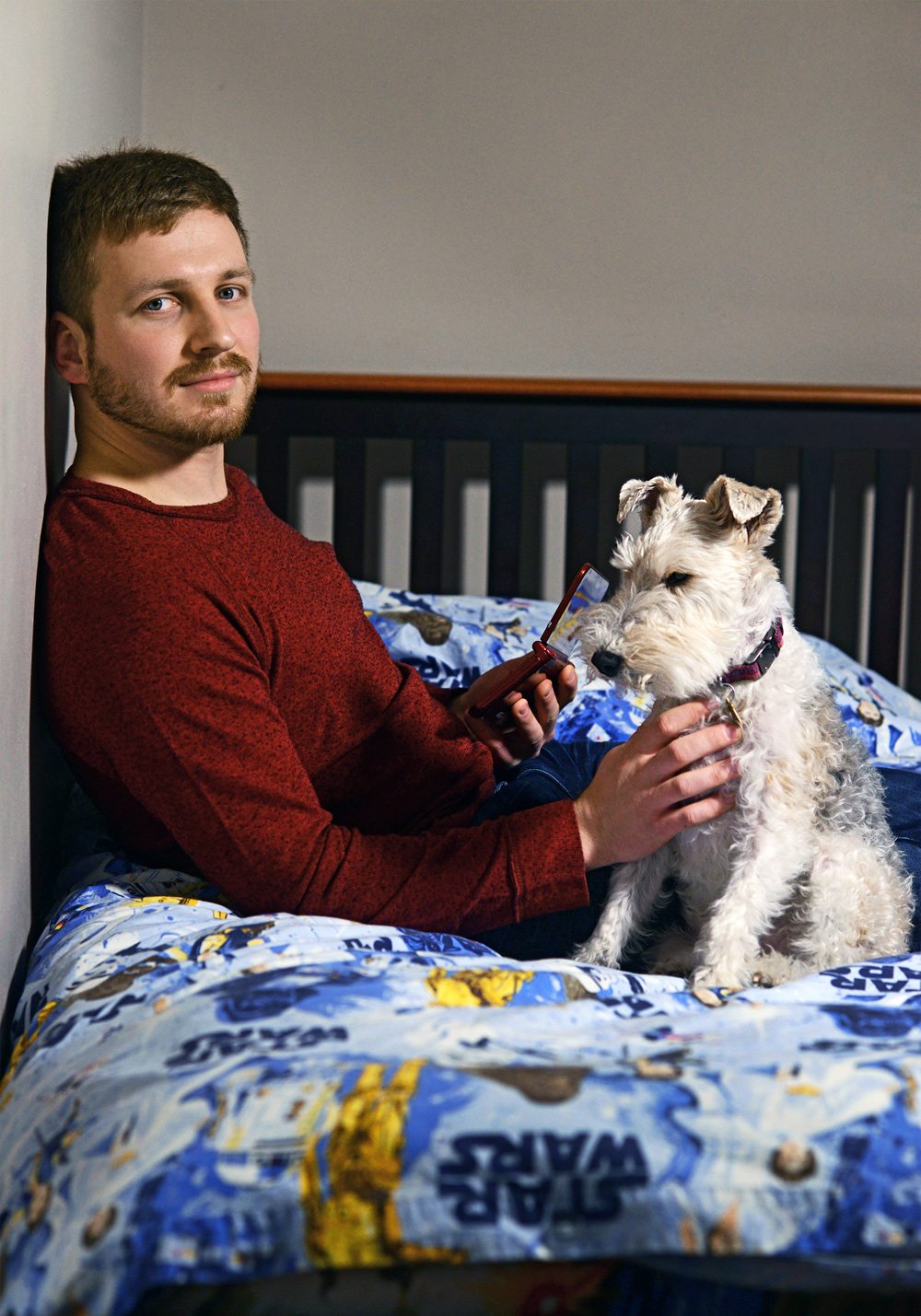 I buy groceries for the household and cook dinner on weeknights because I get home earlier than my parents, who still work full-time. I spend about $480 a month on groceries. I usually make chicken or fish with salad—light and healthy options. We have a cleaner who comes in every week, and my dad and I take turns shovelling the snow or doing yard work.

I’ve saved about $10,000, which I put into an RRSP and a TFSA. I also bought a Volkswagen Jetta, which costs me $316 a month. My parents know how much it costs to rent in Toronto right now, so they’re not pushing me to move out. I only make $21 an hour as an apprentice, and I don’t want to spend every cent I earn on rent. When I become a master electrician, I could make up to $50 an hour. I’d like to buy a piece of property one day in the future, but it’s not realistic right now. I’ll probably have to wait for a major dip in the market. 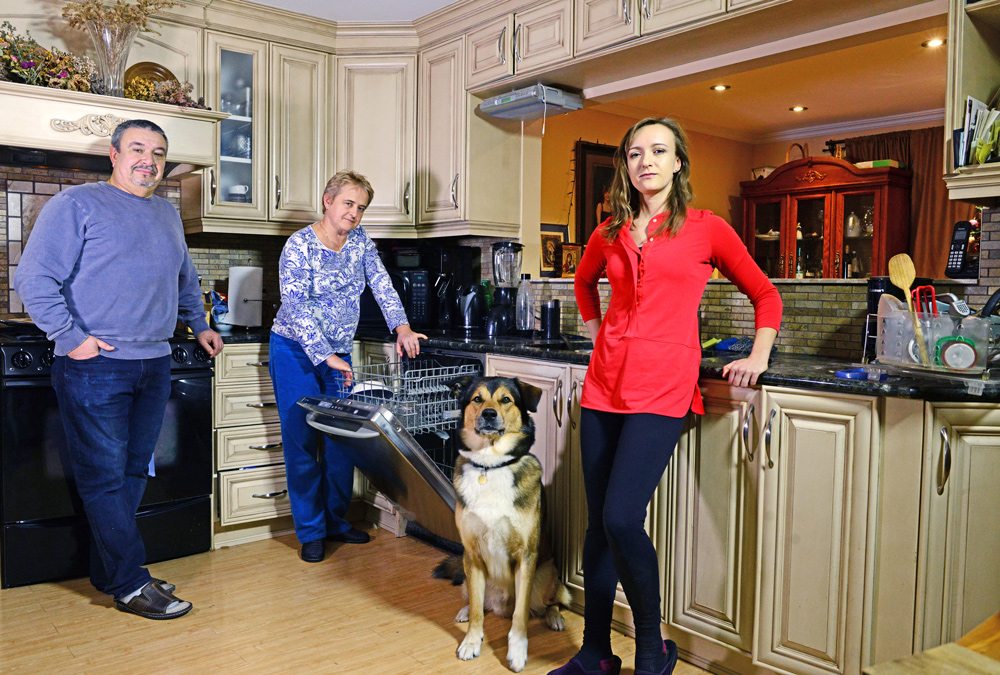 Khrystyna: I studied life sciences at U of T. By the time I graduated in 2010, I owed $30,000 in OSAP loans. I got a job at St. Michael’s Hospital as a research assistant in the cardiology department, but my ultimate goal was to become a doctor.

I applied to an MD program at a university in Poland. I got in, but tuition alone cost $16,000 per year and living expenses were an additional $15,000 per year. I needed another OSAP loan and asked my parents if they could co-sign on a student line of credit from the bank. They’re very supportive, so they said yes. 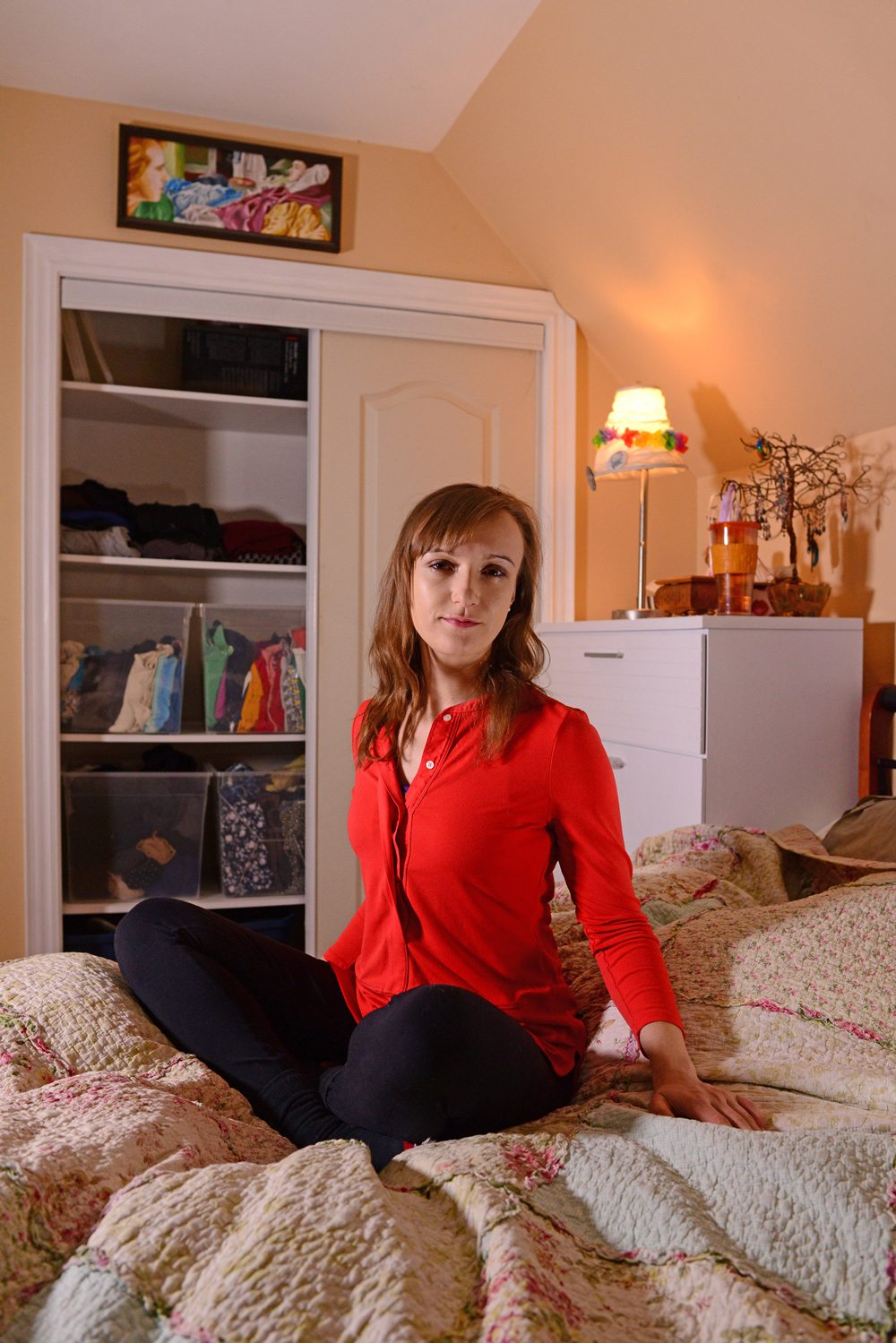 When I arrived home from Poland in 2015, I moved back in with my parents. I had a consolidated line of credit totalling $130,000, and the debt was crippling. I felt guilty every time I spent money. Eventually, I decided not to apply for a medical residency because the stress of the job was affecting my health. Fortunately, I got my job back at St. Mike’s, and I was soon promoted to research co-ordinator. Now about 60 per cent of my paycheque goes toward my loan payments. I’m finally starting to see a light at the end of the tunnel. I’ll be debt-free in three years.

My parents understand my financial position. They’re not pressuring me to move out, but the house is pretty cramped. My dad snores, so he sleeps in the basement. I sleep in the same room as my mom; we share a queen-size bed. My 23-year-old brother has his own room. There isn’t a lot of privacy, but that’s okay, because we all have different schedules. I stay at my boyfriend’s house most weekends.

I buy groceries and toiletries for the household as needed. My chores include doing the dishes every day and walking our dog, Rush. On the weekends, I clean and do laundry for the whole family. I want to get a place with my boyfriend, but we’ll probably have to wait until I get a raise or a new job. 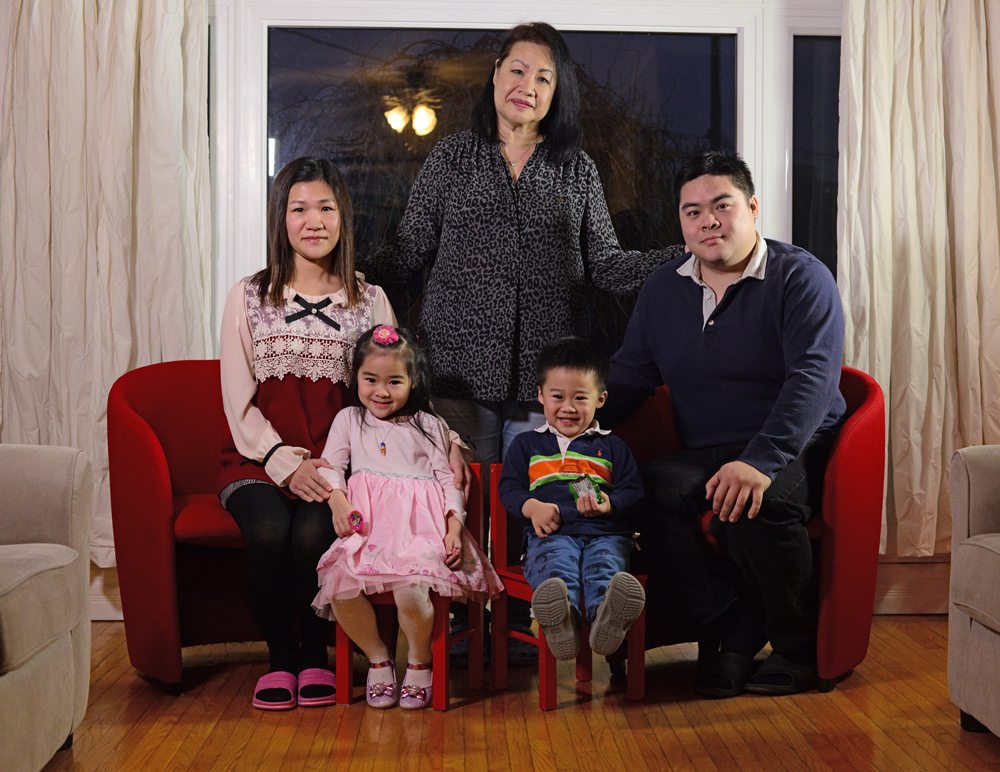 Matthew: My dad died when I was four, so it’s always just been me and my mom. About 10 years ago, I briefly looked into renting a one-bedroom or bachelor apartment, but it was $1,000 a month, and I was only making $12 an hour as a sous-chef. I knew I couldn’t afford it.

Six years ago, I married Cathy, and she moved in with us. We have two kids, Ella and Adam. My mom doesn’t mind having three more people in the house—she’s always wanted me to have my own family. Cathy is currently taking English classes. When she’s done, she’ll probably get a job at a factory.

My mom pays the mortgage, which is $1,600 a month plus property taxes. She also pays for the home phone and Internet, which come to $70, and I pay another $70 for cable. I cover the groceries, which cost about $150 per month—we shop at small Asian markets where everything is super-cheap. My other expenses include monthly car payments ($500 per month), cellphone bills ($200 per month) and credit card payments ($210 per month). 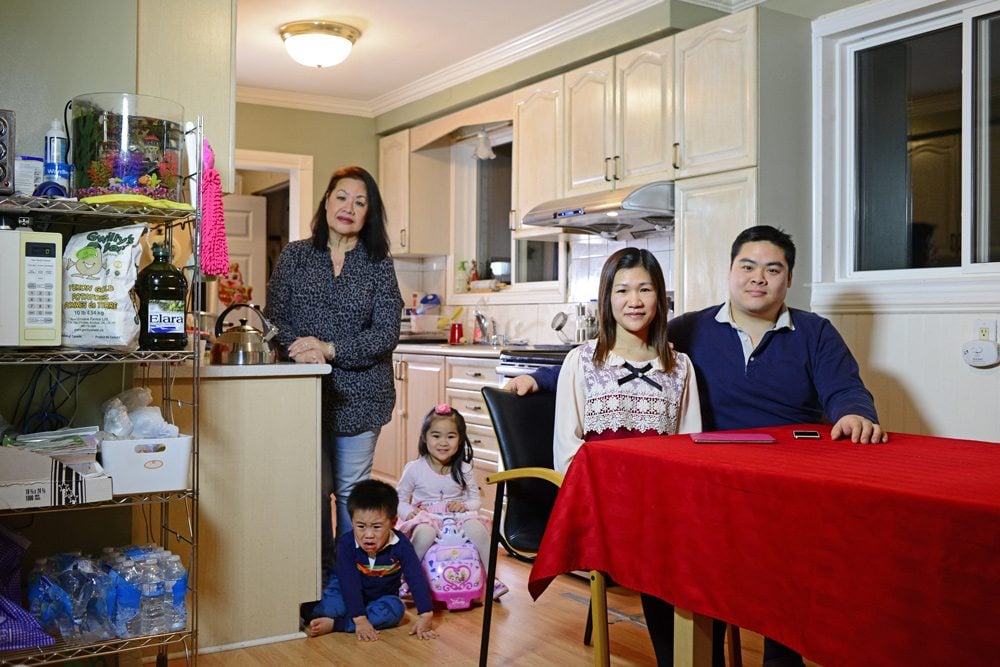 On weekdays, my mom cooks Chinese food for dinner. I do the dishes, and Cathy cleans the house. In the summer, I grow a tomato and herb garden and trim the trees. When it snows, I do the shovelling.

Two years ago, my mom started talking about downsizing. She wants to live in a condo. She’ll probably move within the next five years, but she’ll stay in the ­neighbourhood—she still wants to be able to walk the kids to school. Once she moves, I’ll have to pay the mortgage on this house. I’m already applying for higher-paying positions at my catering company. Hopefully Cathy will be working by then, too.

When I start making more money, we’ll replace the heating system, fix the exposed electrical cords in the basement and update the kitchen. I think we could sell for $700,000 in five years. If we do, we’ll split the profit with my mom.