Eight years ago, my husband, Shain, asked me if I wanted to buy a farm. At the time, we lived in a nice house at Bathurst and St. Clair; I was a film producer and he was a literary agent. We were empty nesters in our 50s and working harder than ever. We often put in 15-hour days, catching up for an hour at home before crashing for the night. But I’d always wanted to raise animals, and Shain was looking for a weekend escape where he could watch the sunset over green pastures.

Three weeks later, while scouring a rural newspaper, we spotted an ad for an eight-hectare farm in Campbellford, about two and a half hours’ drive northeast of Toronto. It had green fields and a Victorian farmhouse with the wraparound porch of Shain’s dreams. We decided to make an offer before we had even stepped inside the house. The place was listed at $495,000; for $475,000, it was ours.

The house was rickety and rundown, with no air conditioning and outdated appliances. For water, we relied on a well that ran dry every few weeks. But we loved the antiquey charm: wide-plank floorboards, mullioned windows, 10-foot ceilings. We inherited 20 chickens from the former owners, bought three horses and hired a farmhand to care for the animals when we were in Toronto. For the first month or so, we spent weekends planting flowers, drinking wine on the porch and watching our horses graze in the pasture. On Monday mornings, we’d head back to the city grind.

Soon our inexperience caught up with us. The chickens seemed easy enough at first: all I had to do was feed them, collect their eggs and clean their coop. That was until I walked in one day to find one lying dead. The next day, I walked in to find another dead chicken, and another the following morning. It was like a scene from The Birds—and I was convinced that I was somehow responsible. When I called the vet in a panic, he burst out laughing. “The thing about chickens,” he said, “is that they live, and then they die.” They weren’t spring chickens, he told me. They’d died of old age.

In time, I learned the everyday hacks to pass as a hobby farmer. When our gate collapsed, I resisted the temptation to call a handyman; instead, I grabbed baling twine from our barn and jury-rigged it shut. It took five hours. When one of our horses started escaping from his stall every day, I was able to patch up the enclosure. And after a few failed attempts to start the old, finicky tractor we inherited, I enlisted a neighbour to teach me how to operate the thing.

In 2013, I discovered Nigerian dwarf goats: a rare breed that grow to about the size of border collies and are just as affectionate. Besotted, I decided to buy a few for the farm. And they came relatively cheap: four does—Pearl, Eva, Butterscotch and Emmy—were only $100 each. We picked up our new hircine beauties in Milton and loaded them into our Dodge Caravan. On the way home, we stopped for a bathroom break at Yorkdale. I realized just how much my life had changed: as I returned to the car, I could hear the goats bleating for attention in the parking lot while passersby stopped and stared in amazement.

I moved to the farm full-time to care for my new herd. My days changed dramatically: I was waking up at 5:30 a.m. to answer emails and deal with business for my day job. By 8, I was in the barn feeding the goats. Sometimes I was roused in the middle of the night by a runaway horse or a sick doe. The workload was double what I’d had back at home—and I was loving every minute of it.

As a first-time goat owner, I had a steep learning curve: I never knew if the goats were eating enough, if they were comfortable, if they had everything they needed. Like every 21st-century DIYer, I YouTubed my way through, watching tutorials about how to arrange their bedding, how to milk them, how often to replenish their water supply. Shortly after bringing the does home, we acquired a studly buck named Don, and he knew exactly what to do. Soon, all four does were pregnant. No one could have prepared me for the morning I arrived in the barn to find a tiny baby goat, shivering at the door, while the does sat at the other end of the pen. I freaked out: whose baby was it? What if it hadn’t eaten or bonded with its mother? I called our breeder. “Just pick up the baby,” she said nonchalantly. “The mother will start screaming once you do.” She was right: as soon as I grabbed the kid, Pearl bleated bloody murder.

Shain and I are busier and happier than ever. Nigerian dwarf goat’s milk has the highest butterfat content of any breed, and soon, I started making amazing cheese and fudge, and selling it at farmers’ markets; eventually, I connected with local artisans to make goat’s milk–based skin-care products. Last year, we upgraded to an 80-hectare farm in Port Hope, where we’re also raising alpacas and miniature Icelandic horses. And as for the goats? Last spring, we welcomed our 92nd kid.

Ten years ago, I fled the only home I’d ever known to escape a violent regime and wound up in a detention centre for 1,284 days. Here’s how I found my way to Toronto 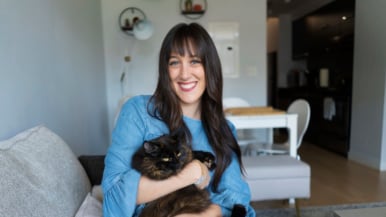 Adventures in real estate: “I left the city during Covid—and then came back. Here’s why”

“My first time living in Toronto was supposed to be a new adventure. It didn’t quite turn out that way.”

How the culinary and architectural gem came to be

“The refugee building reminded me of the International Centre in Mississauga”