Who: Matthew Casselman, 27
What he does: Policy advisor for the government of Ontario
Where he lives: A 600-square-foot condo at Jarvis and Richmond

Casselman grew up in Brockville, a small town about 100 kilometres south of Ottawa. After high school, he got his business degree at Wilfrid Laurier, but realized that his true passion was social justice. So, in 2015, he moved to Toronto to get his masters in public policy at U of T. After graduating, in 2017, he took a job with Ontario Public Service in the Ministry of Health, making $63,000. Earlier this year, he took a more senior position as a policy advisor in the Ministry of Heritage, Sport, Tourism and Culture Industries, with a salary of $75,000.

Before the pandemic, Casselman had set himself a goal of buying a two-bedroom downtown condo with a view of the lake by the time he was in his late 30s. He figured it would take about 10 years and involve saving between $200,000 and $300,000 for a downpayment.

His money-saving strategy involved buying clothing and furniture at thrift shops, garage sales and on Kijiji. As a self-described extrovert, his biggest extravagances were dining out, drinking at bars and seeing his favourite singer-songwriters, like Ria Mae or Låpsley, in concert at the Mod Club or Danforth Music Hall. Casselman’s overall financial philosophy: save money without forgoing fun. “Being an outgoing person in Toronto can impact your finances in a big way, but I think we all need to maintain a human connection,” he says. 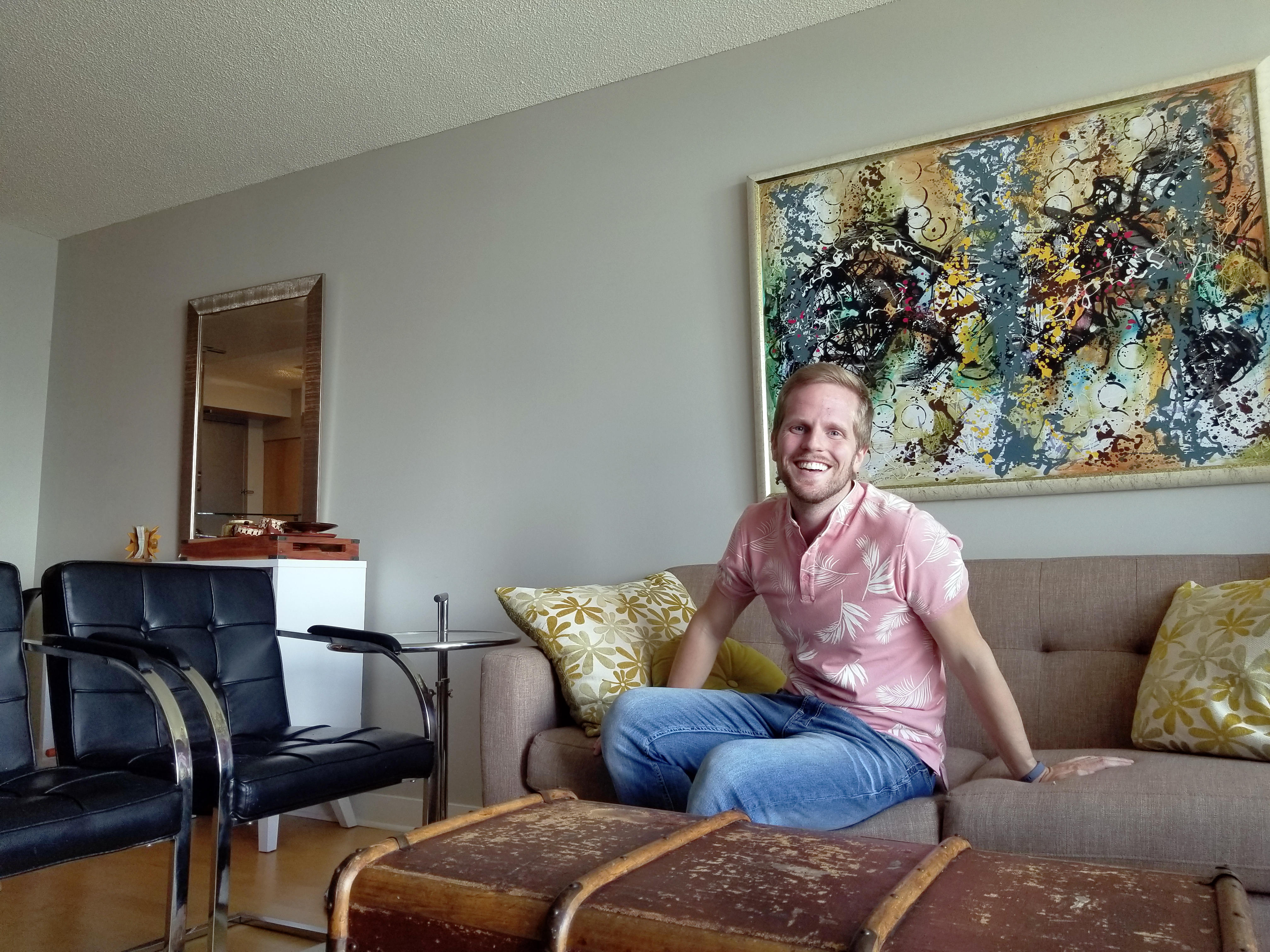 Rent: $2,087, including parking. “Rent is such a big expense in Toronto, it made me very conscious of where the rest of my money was going.”
Car insurance, maintenance and gas: $400 a month. “Last year, I bought a Buick Lucerne second-hand for less than $5,000 with my savings. I mostly drove to visit my parents in eastern Ontario.”
Cellphone: $56 a month, with Virgin. “I got a BYO-device plan because it was cheaper. I went with the 6GB version, because I used Google Maps on my phone a lot when I was driving.”
Internet: $50 a month, from CarryTel. “I’m not tech-savvy at all, but friends told me that smaller internet distributors offer better deals.”
Groceries: $500 a month, from No Frills, Loblaws and the St. Lawrence Market. “I cooked a lot and made all my lunches at home. I also like to entertain, so I’d get wine or beer and have friends over for a three-course meal.”
Subscriptions: $30 a month, for CBC Gem, OUTtv and Audible. “I listened to audiobooks on my way to work, and watched TV on quiet nights.”
Public transit: $30 a month. “I almost always rode my bike from my place in Old Toronto to my office at University and Dundas. I would only get on the subway in a total downpour.”
Bike Maintenance: $25 a month, at Ya Bikes! on Queen Street. “I got my hybrid bike for $300 on Kijiji.”
Gym: $30, at Hone Fitness. “I did a little bit of cardio, free weights and weight machines.”
Clothes, furniture and appliances: $100 to $200 a month. “I mostly went to thrift shops. I was never inspired by the idea of going to IKEA and getting the same stuff that everybody else has. I always wanted things that were unique.”
Dining out: $200 a month, at restaurants like Chew Chew’s Diner and Golden Turtle. “I loved eating out with friends. You could usually find me at diners or cheap Vietnamese restaurants.”
Concerts and entertainment: $400. “I wasn’t going to see Lady Gaga or acts that are really expensive; it was usually something a bit more affordable, plus a few drinks at the bar beforehand.”
Race entry fees: $50 a month. “I was heavier in high school, so I started running to get in better shape. After that, I did about six races a year, mostly 10Ks and half marathons, which helped me tap into my competitive nature.”
Haircut: $35 a month, at Gents Barbershop. “I just get a buzz on the sides with a scissor cut on top,” he says.
Donations: still $100 a month, split between the Green Party, St Paul’s United Church and various environmental NGOs. “I was always interested in politics. I’ve been a member of the Green Party since I was a kid.”
Pension contribution: $425 a month. “I was very lucky that, as a government worker, I got offered a defined benefits pension plan. When I joined, I had the option to make employee contributions. That was a no-brainer.”
Savings: $500 to $600 a month, to a TFSA/HISA. “I was saving to purchase a downtown condo. As a gay person, I like the idea of living downtown close to my community, but it’s extremely expensive.”
Travel: $2,500, for a trip to Mexico and to visit friends and family. “I went to Puerto Vallarta in February and split an Airbnb with friends. We ate at cheap restaurants and parked ourselves on beach chairs. I also visited my parents in Brockville a few times, and mooched off friends with cottages in Bracebridge or Prince Edward County.”

Casselman has been working from home during Covid-19. “I’m really lucky to maintain my income, while a lot of people are facing financial difficulties,” he says. When the stock market crashed in March, he took the opportunity to move money from his high-interest savings account into various ETFs and a few stocks, hoping to benefit from future market growth. He had to scrap plans for an upcoming trip to a political convention in Kitchener-Waterloo, several concerts and all of his upcoming running races, but he expects to be reimbursed about $1,000. His thrift shopping has also been put on hold. “It’s a bummer. I’m probably the opposite of Marie Kondo. Instead of getting rid of stuff, I love buying lots knick-knacks.”

His biggest budgeting change during quarantine has been re-routing the money that he would typically spend on entertainment into his savings. “I’ve been keeping in touch with friends remotely or meeting them for runs, neither of which add to my expenses,” he says. “The pandemic has provided a big opportunity to save up.” He plans to keep his going-out expenses down even once restrictions are relaxed, since his dream of homeownership is still a long way off. “It’s still very much out of reach,” he says, “But I’m slowly working toward it.”

Rent: still $2,087. “I’m working remotely. I have teleconferences all the time and I’m on the phone a lot, so living alone works.”
Car insurance, maintenance and gas: $225 a month. “I filled out a form on the Belairdirect website, answered three questions and they gave me a 25 per cent discount on my insurance. I’m not driving much, so my gas bill has dropped by about $100 a month. The car is great when we’re being asked to limit grocery shopping to once a week.”
Groceries: $400 a month, from No Frills and St. Lawrence Market. “This went down because I’ve been having people over less. Plus, I’ve been going to some discount grocers. I’ll get coffee beans from the roaster at the St. Lawrence Market, so I can still support local businesses.”
Subscriptions: $30 a month on CBC Gem, OUTtv and Audible. “The cost hasn’t changed, but I need these more than ever. RuPaul’s Drag Race is taking up my Friday nights.”
Public transit: $0. “I hated taking public transit, because I live downtown so it never made sense to pay for the subway when I could walk or bike for free. So, I don’t miss it at all.”
Bike Maintenance: still $25 a month. “These days I go riding without a destination in mind. I cruise around to Woodbine Beach or head west on the lakeshore.”
Gym: $0. “I’ve put my Hone Fitness membership on hold while it’s closed. Instead, I’ll run, ride my bike or do yoga on my own for exercise.”
Clothes, furniture and appliances: $100 a month. “I bought an immersion blender on sale from Best Buy. I also got some geraniums for my balcony from a convenience store near my place.”
Dining out: $0. “I’m saving a bunch, but I really miss dining out. I’m really struggling with maintaining social activity online. I’ve learned that a big reason why I spend money to go out is because I want in-person socializing.”
Concerts and entertainment: $0. “I had tickets booked to Sarah Harmer and LP, but both of those shows were cancelled,” he says. “I got a refund for Sarah Harmer. It’s unclear whether I’ll get one for LP, too.”
Race entry fees: $0. “I’m still running on my own, doing between eight and 15 kilometres every day.”
Haircut: $0. “I haven’t attempted the infamous ‘Covid cut.’ If we get to September and I still look like a caveman, I’ll shave my head.”
Donations: $100 a month. “This is such a small percentage of my income and I get back more than half at tax time, so I haven’t considered scaling it back.”
Savings: $1,600 a month. “It’s awesome to see my savings growing faster. I recognize that it’s only temporary, but it’s nice to get a little bit further ahead than I otherwise would have been.”

Has Covid-19 impacted your spending habits?
Email us at costofliving@torontolife.com.