“I’m constantly calling airlines, but the phone just keeps ringing”: What it’s like to be a Torontonian trapped in Italy

“I’m constantly calling airlines, but the phone just keeps ringing”: What it’s like to be a Torontonian trapped in Italy 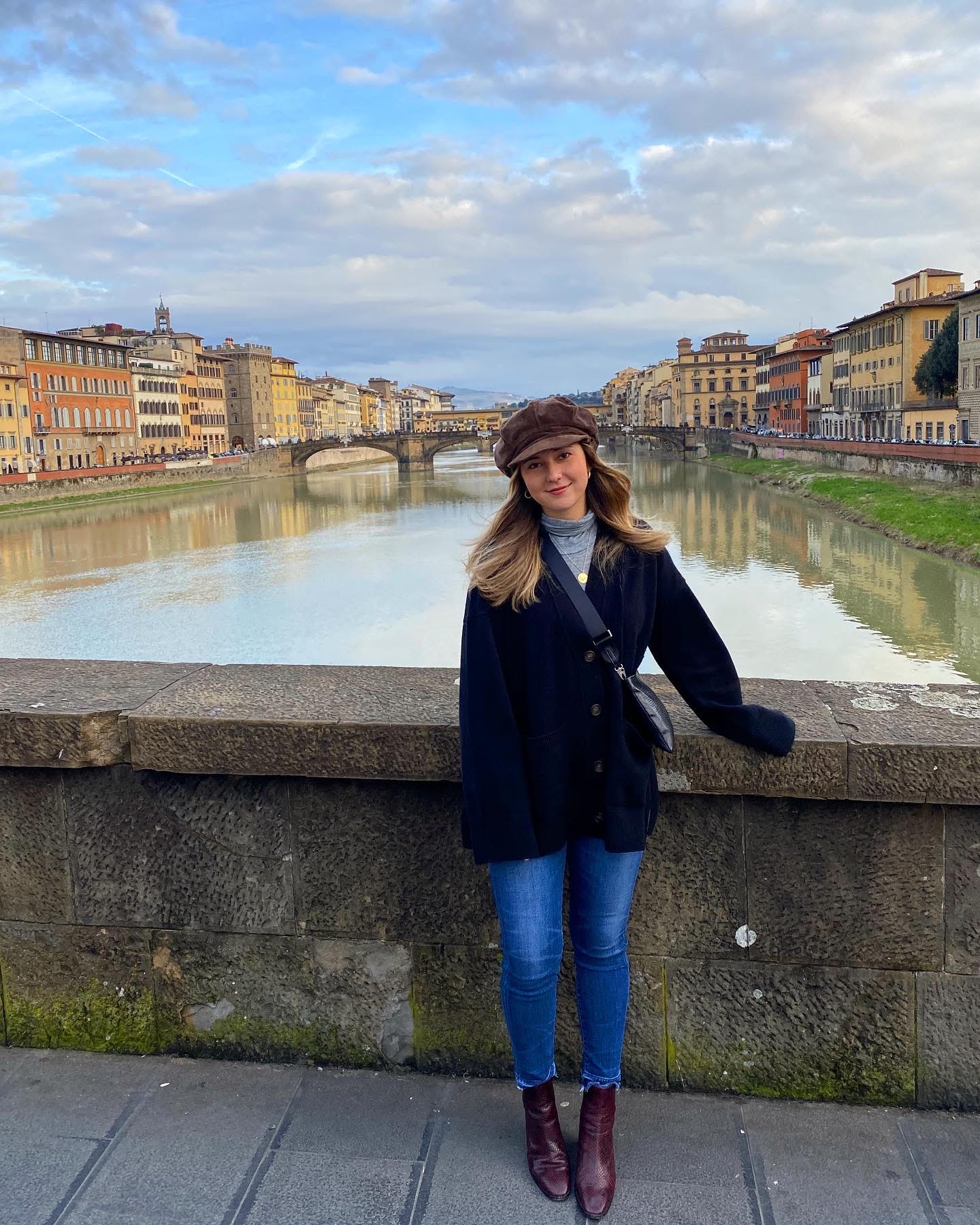 Last spring, I finished my undergrad program in journalism at Humber College. I was working as a server in Oakville, my hometown, and some colleagues mentioned they’d worked as au pairs in Europe. My father was born in Italy, and some of my family still lives there, so the idea sounded great to me. In January 2020, I packed up and moved to Florence, where I’d work for the CEO of a large financial company and take care of his 11-year-old daughter. I was excited to become fluent in Italian, meet new friends and visit new cities across Italy and Europe.

On January 22, my second day as an au pair, I was walking home from the bus stop with my 11-year-old charge. “My friend at school said we have to wash our hands a lot because there is a virus coming and it is going to make people really sick,” she said. That’s odd, I thought to myself: maybe it’s an overzealous parent scaring their children into learning proper hygiene? But sure enough, in the days to follow, I started receiving news alerts on my phone about a new virus spreading throughout Wuhan, China. My parents had heard about the virus and begged me to come home early. I wish I’d listened to them. I figured it would never come here.

About a month later, a 38-year-old man in Codogno, Lombardy, in the north of Italy, was confirmed as the country’s first official case of coronavirus. The situation escalated rapidly, as the northern regions of Lombardy, Veneto and Emilia-Romagna—known as the initial red zones—began experiencing huge case numbers. The northern regions were the first to close schools and ban large gatherings.

The whole energy in Florence began to change. When I walked down the street, I noticed more people wearing face masks. If someone coughed or sneezed on a bus, their neighbours usually bolted to another seat. Worst of all, I noticed people covering their faces with scarves when they passed Asian people on the street.

One day in late February, while I was sitting in Italian class, my teacher announced the closure of schools in Milan and across the Lombardy region. “Maybe our schools will close here, too,” he said. I was in shock: no cases had been reported in Florence, so why would the schools shut down here? Then, in the coming days, I noticed that the streets began to empty. Usually, I would dodge selfies in front of the Duomo. I no longer needed to—the whole piazza was empty. In the bars surrounding the cathedral, waiters stood outside, idle and bored. The large tour groups that were always so ubiquitous in Florence suddenly disappeared, as the Italian government began banning flights from China. There was a feeling of panic that the Florentines were losing their livelihood. 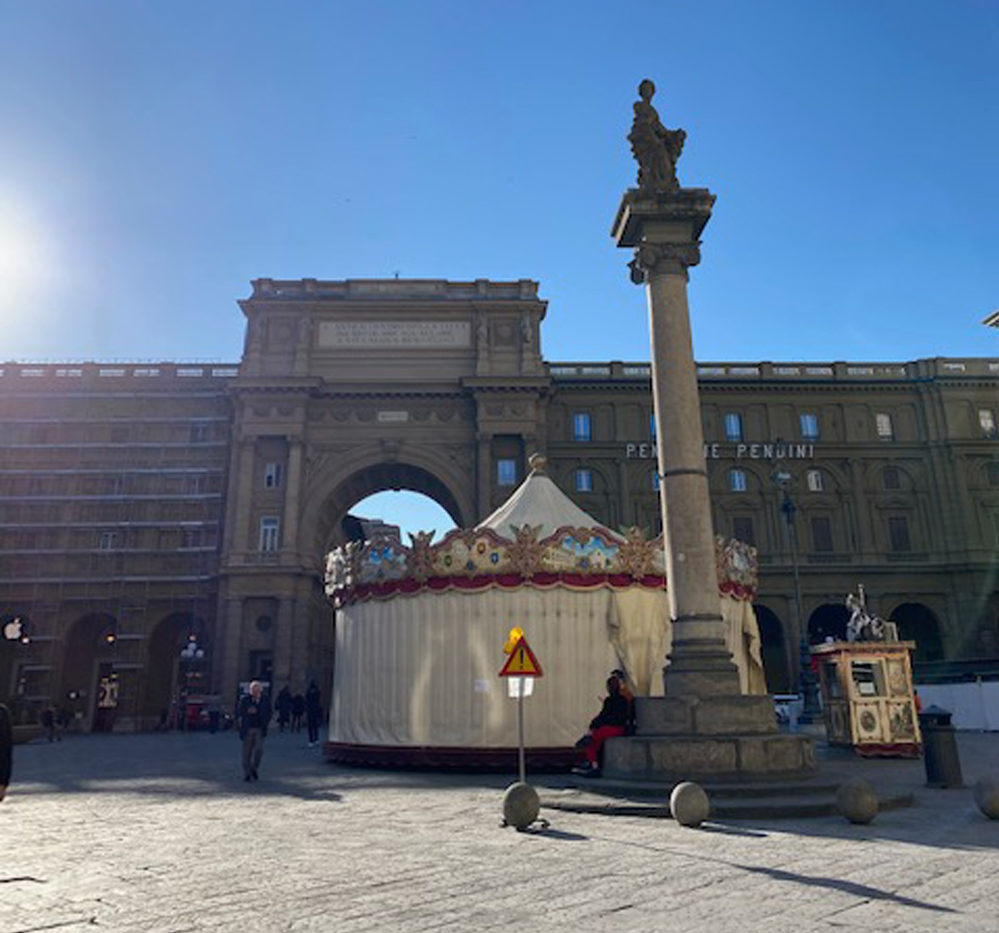 On a gloomy Sunday afternoon, a girlfriend and I went to a local pub popular among American students. While grabbing a pint, my friend and I began talking with some young guys in the U.S. military, based in Veneto. They had been recently sent back from Israel due to the spread of the virus and would soon be completely locked down on their base. Other friends told us their schools were cutting their programs and forcing them to return immediately to the States. A student sitting near us said his school was closing student housing in just five days. Another friend wasn’t allowed to return after spring break and was forced to leave behind almost all his belongings. Patios that had recently been full of tourists and students, sipping cappuccinos or Aperol Spritz, were now empty. The more stories I heard, the more real coronavirus became in my mind.

Last Sunday, I took a day trip Bologna. The streets were empty and most landmarks were closed. As I travelled home on an empty train, I tried to figure out what to do. In the end there was only one option: it was time to go home. The next morning I booked an $800 flight home to Canada through Delta—I selected a round trip, since I was hoping to come back soon (and the one-way flight was nearly $1,000 more). That evening a friend and I sat in Acqua Al’2, our favourite restaurant in Florence; we used to have to wait in line for a seat, but now we were only one of two tables. We spent frivolously, ordering their famous blueberry steak—beef tenderloin topped with a blueberry-balsamic reduction—and a bottle of red wine. We chatted with the owner, who was lamenting that he’d just been forced to close his other business, a nightclub called Blob. As I returned home from dinner that night, Italy announced that the country was on lockdown. My stomach sank. The next day, the prime minister, Giuseppe Conte, announced that only grocery stores and pharmacies would remain open. I nearly had a panic attack on the phone with my mother. “I’m not going to be able to come home,” I cried. 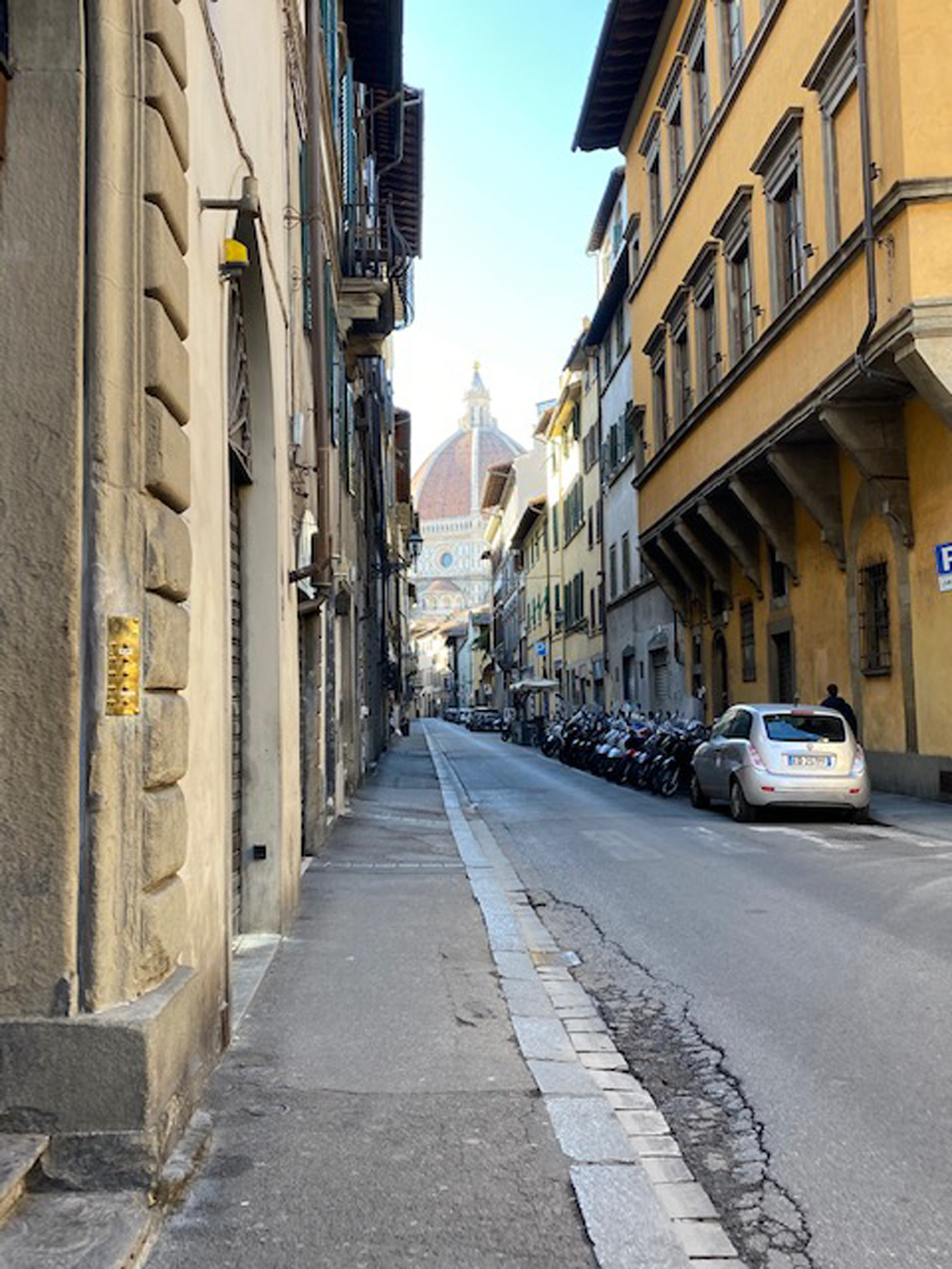 My flight from Florence to Paris was cancelled that day. I tried to book other flights, but they all got cancelled too. I’m still constantly calling airlines, but the phones just keep ringing as more borders close and airlines stop flying to Italy altogether. My friends are getting increasingly desperate: one person booked a flight home for $4,000 (U.S.). When another friend heard that Spain would be closing its borders, he packed his bags in 10 minutes, leaving his clothes behind in the washing machine. There are twisting lineups outside every grocery store and pharmacy, and my local supermarket gave each customer a pump of hand sanitizer.

Residents are trying to keep their spirits up. On Friday night, my neighbours opened their windows and played music: they sang “Hallelujah,” strummed guitars, even banged on pots and pans. It was amazing to hear the sound of life outside my window for the first time in days; being here alone can make you stir crazy. While walking to the grocery store, I try to smile at people passing by, but I’m not sure if they are smiling back under their masks.

I’m trying to fill my time. I usually wake up late. After breakfast I keep busy learning new hairstyles on YouTube and practising my Italian. If I go out for a walk to the grocery store or to take out the garbage, I feels like I’m seeing the world for the first time. I’m aware of everything, looking all around me, taking in whatever I can. My cousin in the south of Italy has continued to take her Zumba classes via Skype, and a woman on a Facebook group admitted she takes the bus to a further grocery store just to fill up her day. 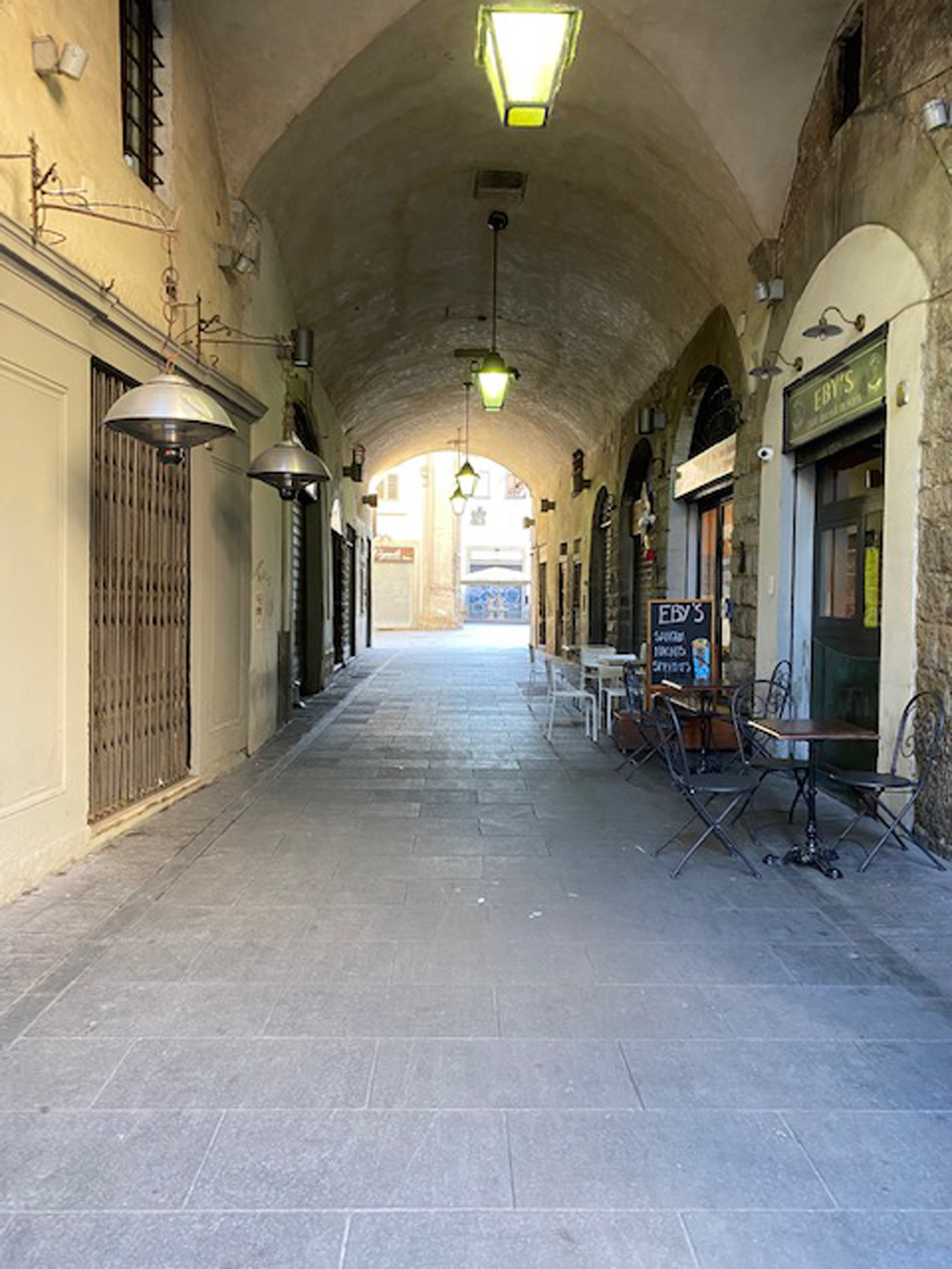 I’m feeling slightly sorry for myself, but I’m lucky that I’m still healthy, and so are my loved ones here and back home. I’ve been reading things online that put my experience in perspective—stories from front-line workers in hospitals that are overflowing with patients, and accounts of how staff are being forced to make heartbreaking decisions about who can be treated and who can’t.

In the meantime I sit in silence, awaiting my departure from Italy, flight cancellation after flight cancellation. The streets are empty, my neighbours’ faces are defeated, and everywhere I look I see the hashtag #iostoacasa—”I stay at home.”