“I sleep with a knife beside my bed”: How a 21-year-old makes it work in a vintage Dodge Sprinter van

“I sleep with a knife beside my bed”: How a 21-year-old makes it work in a vintage Dodge Sprinter van 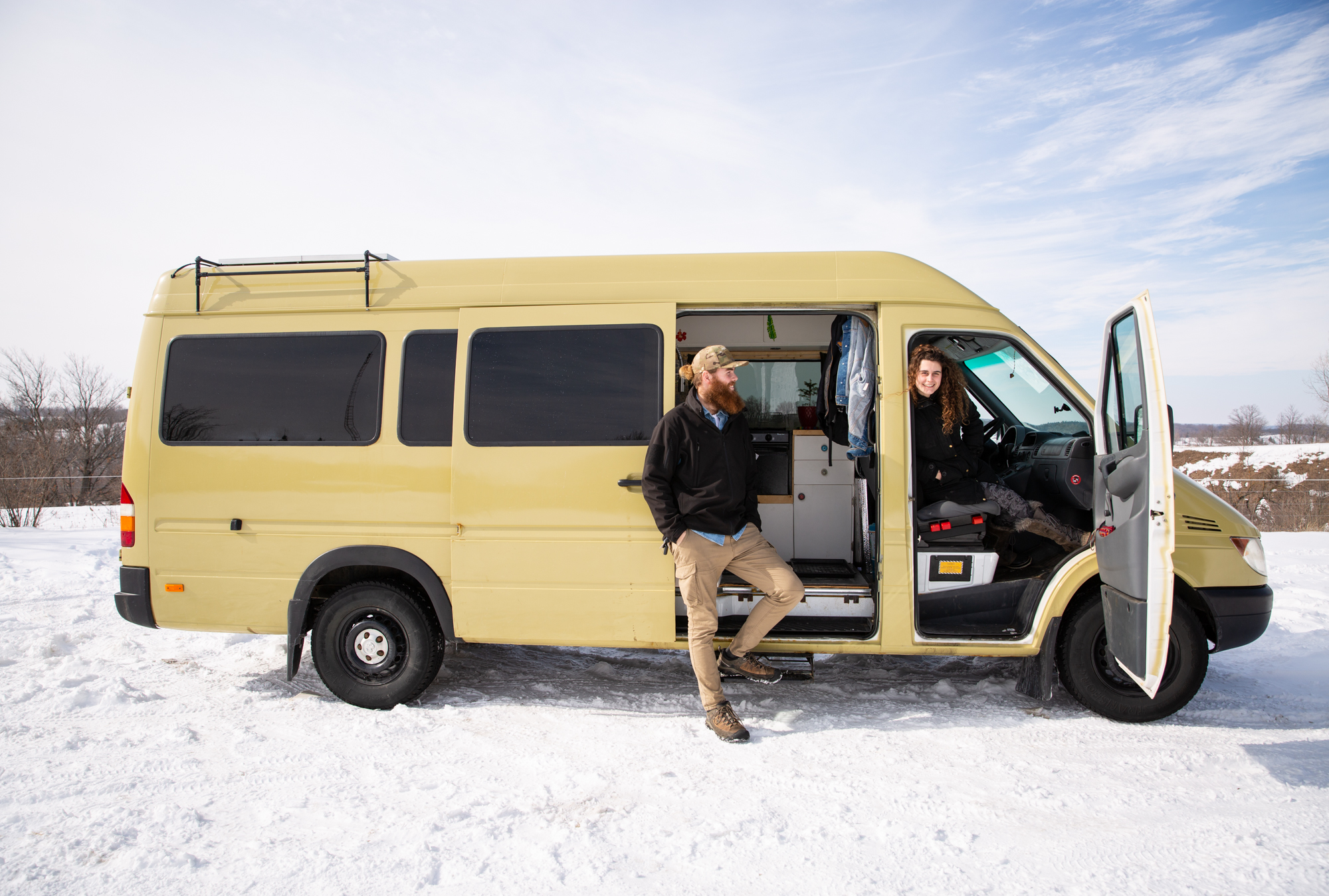 Logan: The first time I saw people living in a van was four years ago, when I moved to Banff after high school. Banff is a huge huge hub where van-lifers come and go as they cross the continent. There were people who lived in minivans or massive sprinters, and they’d park wherever they wanted. I wanted their lifestyle.

I moved back home to Caledon in March 2017. I knew I wasn’t going to be able to afford rent in Toronto and I didn’t see the point of paying for something that wasn’t mine. In the meantime, I got a job at the Millcroft Spa and Inn, and that’s where I met David, who also worked there. We started dating, and I told him I planned to live in a van. He thought the idea was cool—he’d never known it was a possibility. 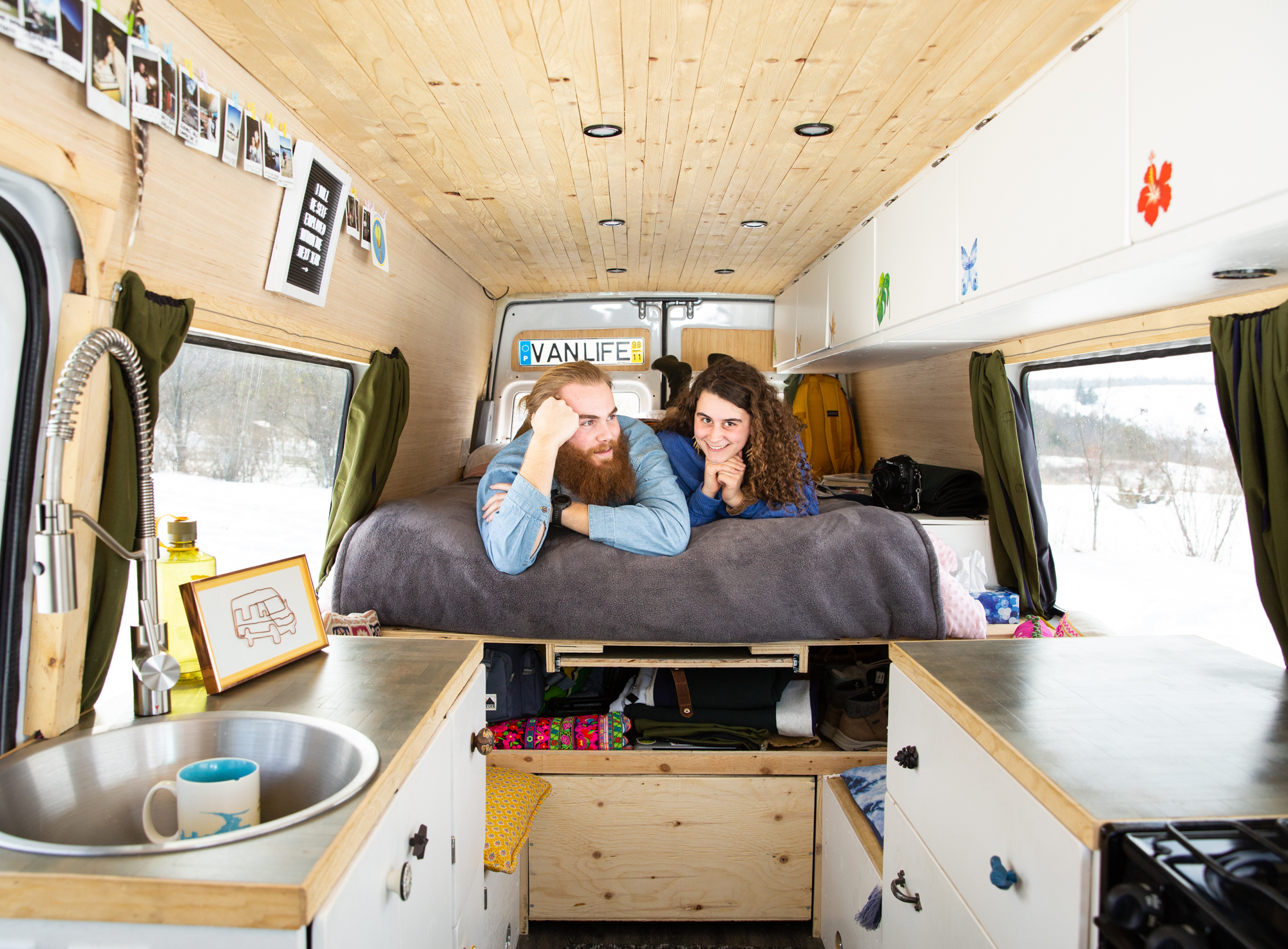 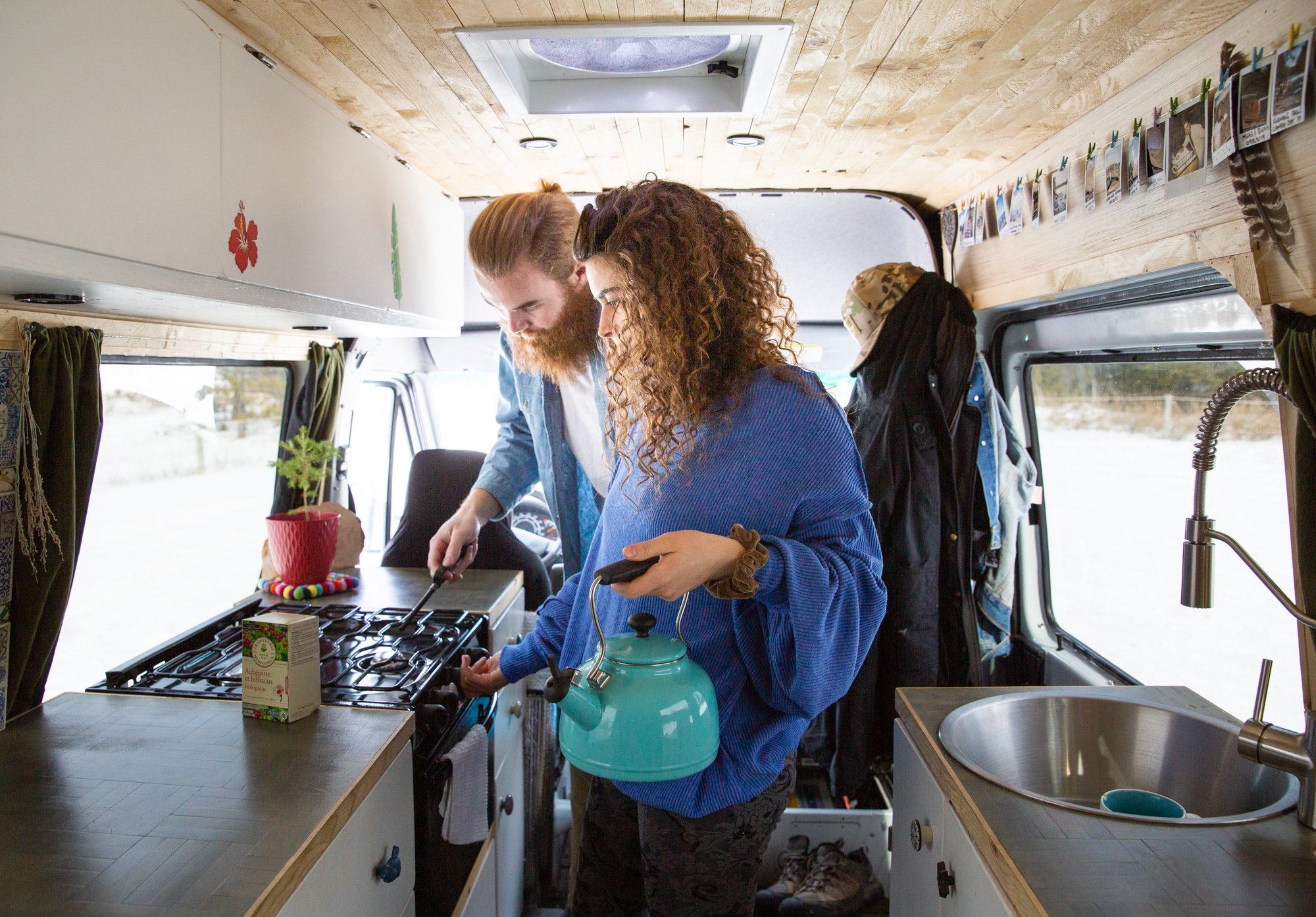 I hit roadblocks several times during the build. I’d talk about giving up and selling the van, but David would talk me through it. Eventually I found people on YouTube who’d been through the same struggles while building their vans, and I was able to solve a lot of problems by watching their videos. I moved out of my parents’ house and into the van in August 2019—I live there full-time, and David splits his time between the van and his parents’ house. For the first while, we took short trips to test the van, spending weekends in Kincardine, Haliburton, Muskoka and Sauble Beach. 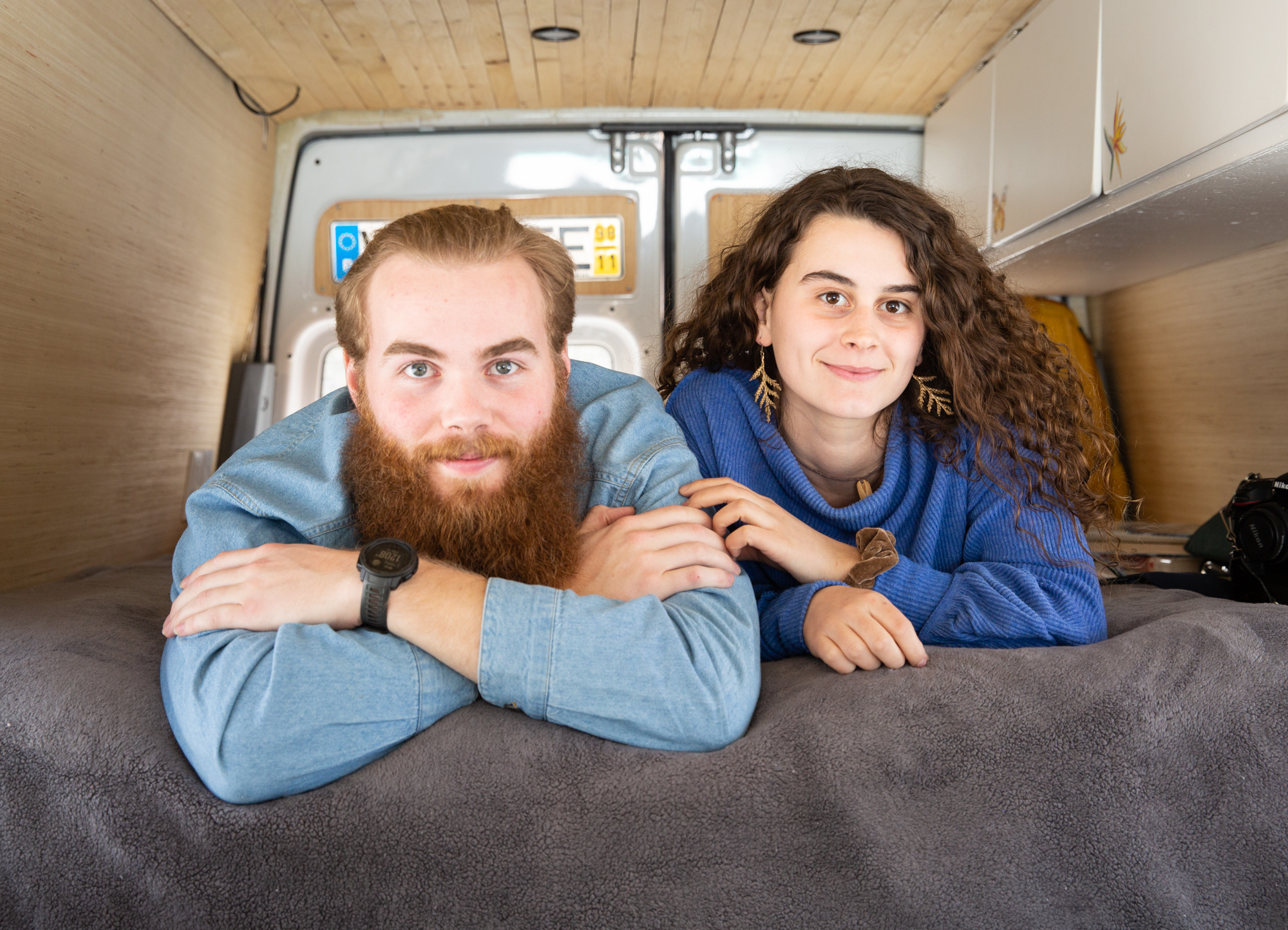 In September 2019, we took our first long-distance trip to Utah. We were in awe. There’s an app called iOverlander, which we used to find places to park every night. We pulled up at this free camping spot right beside a mountain range, and it was just beautiful. At that moment I realized anyone can make van life happen if they want to. 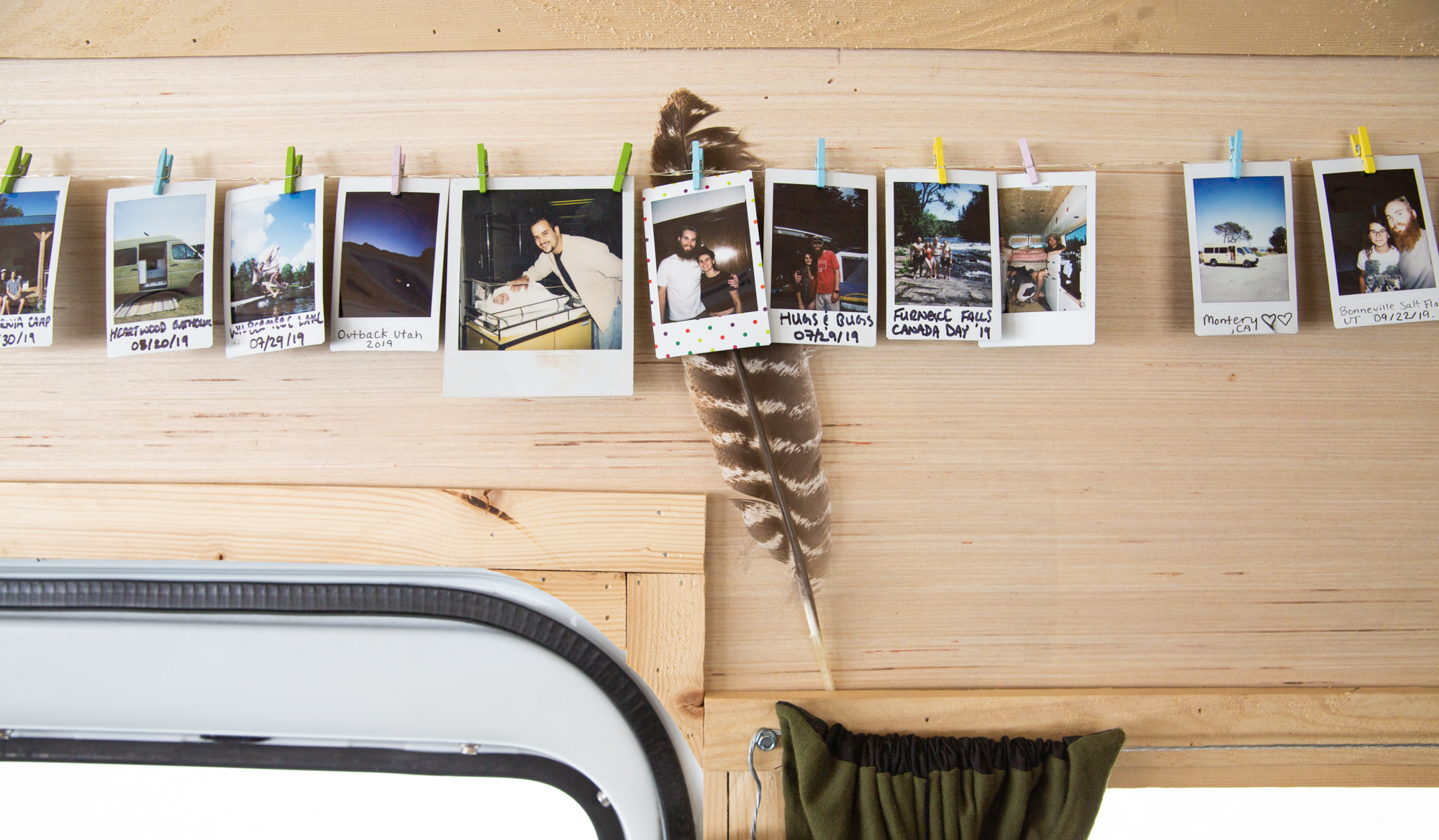 In Caledon, I park at either of our parents’ homes or at trailheads. When we visit friends in Parkdale, we park on overnight parking streets. I have a water tank in the back but I don’t put water in it in the winter because it’s just going to freeze and pop pipes; my faucets already popped. I have a DIY toilet—basically a seat that separates the liquids and the solids—and I dump the jugs in my family’s toilet. I try to use the DIY toilet as rarely as possible, instead using public bathrooms and our families’ toilets. We’re planning to buy a compost toilet in the future, and we might also get a shower with heated water. Right now, we’re okay with using our families’ showers or paying to use the ones in a public pool.

I have a rough plan of what I would do if someone broke in—I sleep with a knife beside my bed. If I need to leave really quickly, I have the keys hung near the ignition. I always park where I can exit right away. David wants me to get security cameras as a safety feature, but it’s not high on my priority list. 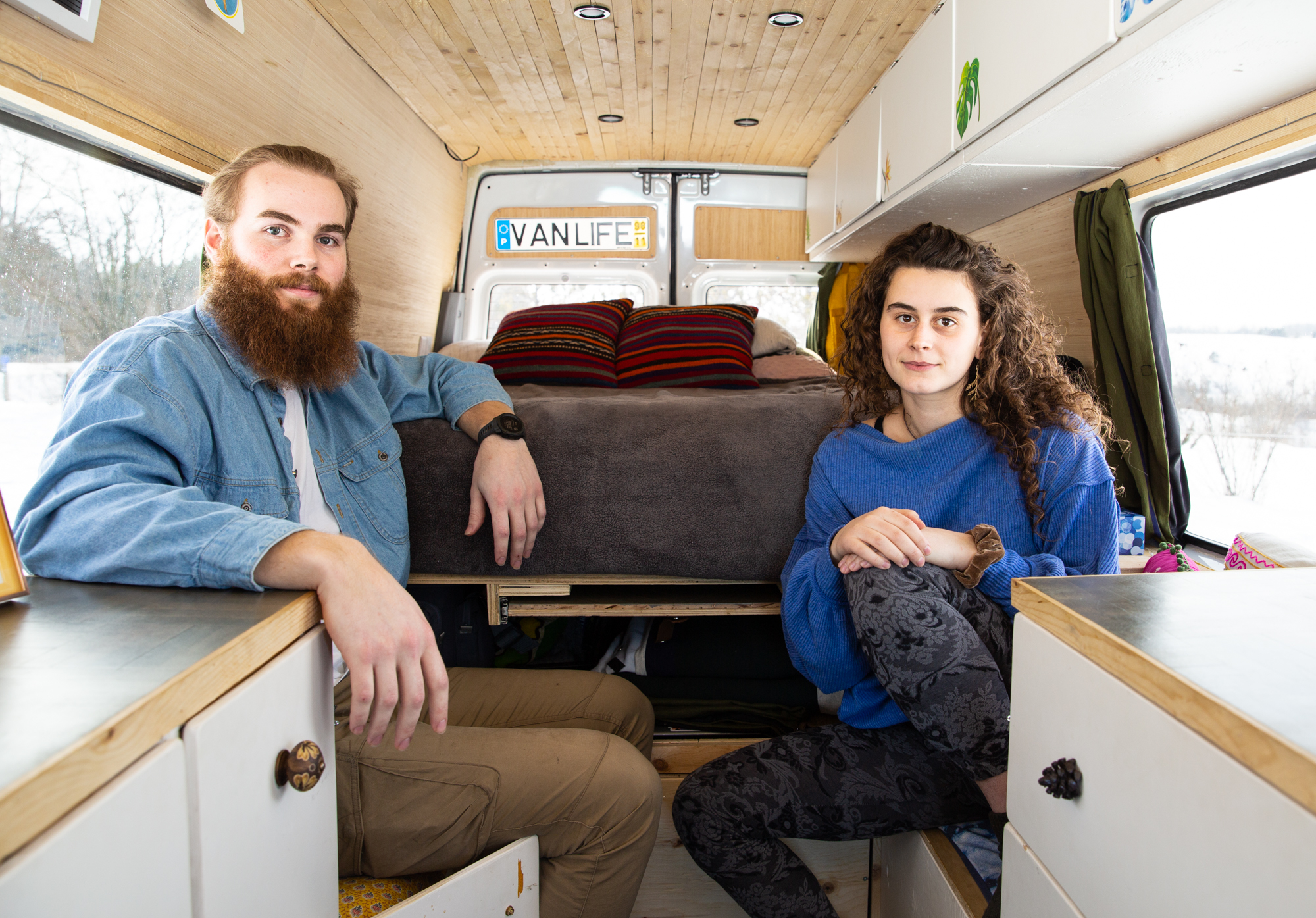 My family was hesitant about van life at first, but now that they see there’s running water, a sink and a bed, they’re fully on board. And I have so much freedom—we can go wherever we want to go on a whim. When David took a course in Markham in February, we were able to bring the van.

I love thrift shopping, and I make a small income by selling clothing I find at thrift shops on Poshmark for a marked-up price. We also have a YouTube channel, and we plan to have van-build consultations as another income source. If we’re really in a pinch, David has a design degree from OCAD and can do design work. 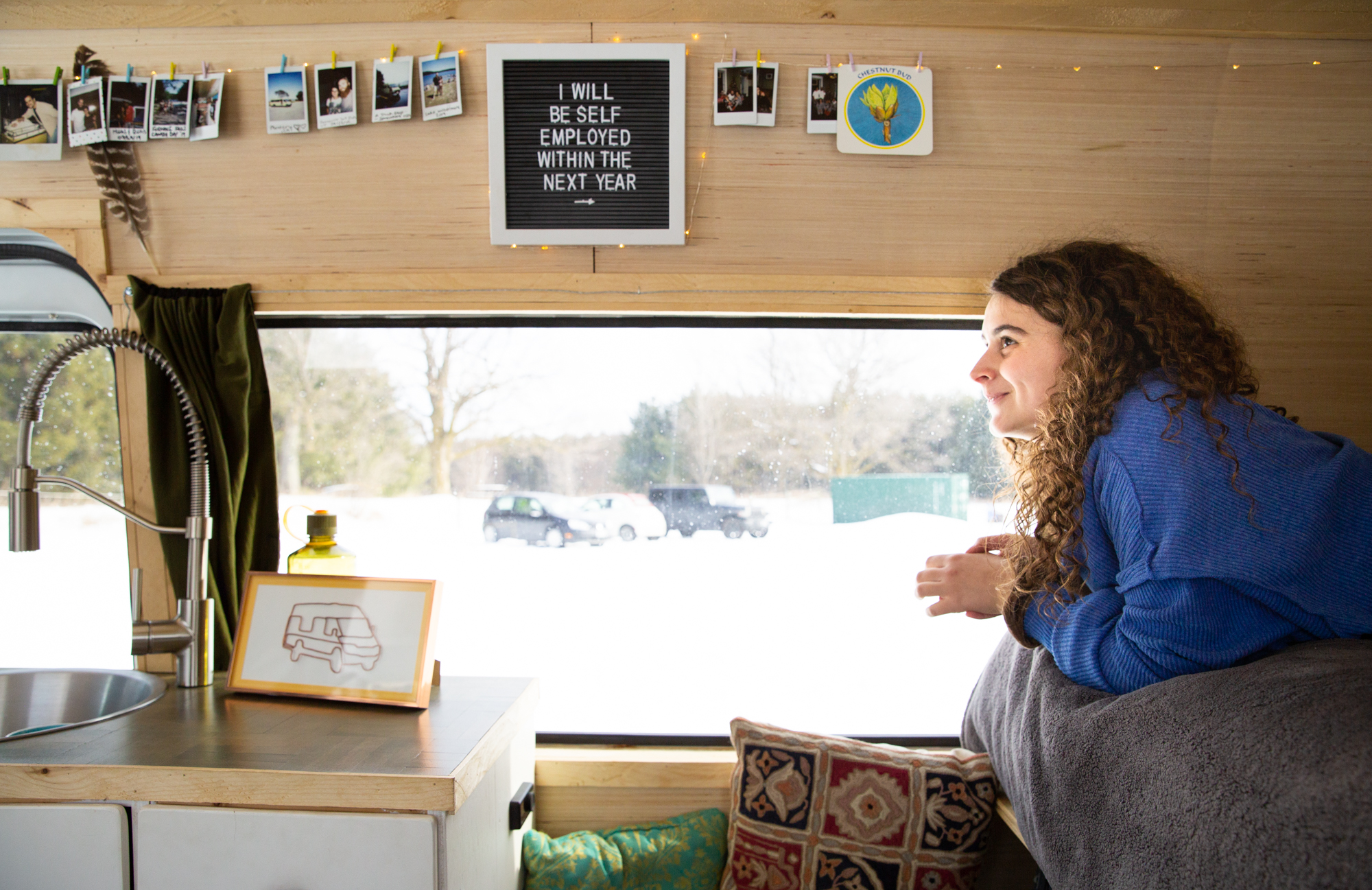 I have no idea if or when I’ll move out of the van. We’ll leave when we feel done or when we find a piece of property. Even then, living in a van is something I’ll always want as an option. I’m never going to be able to afford a house in the world the way it is now. The market in southern Ontario is out of reach for people my age. By doing this, I have my own home; it’s just not a house.