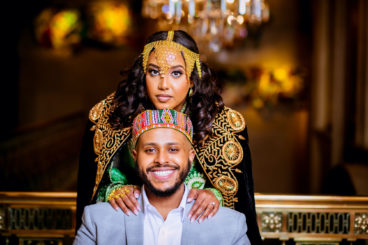 Inside a cross-border Ethiopian-Canadian ceremony

As told to Andrea Yu | Photography by Karimah Gheddai Photography and Weddings by Nia | June 7, 2021

Yasmin Fendish, an occupational therapist, met Omar Mohamed, an IT systems administrator from Maryland, in 2010, and they reconnected seven years later. The couple set their wedding for July 2020, but after Covid hit, they opted for a virtual, cross-border religious ceremony instead. Here’s how it all came together.

Omar: I’m from Maryland, but I have a lot of family in Toronto so I visit often. In July 2010, I was in Toronto for an Ethiopian festival on Centre Island. That’s where I met Yasmin, but it was just in passing.

Yasmin: It was 2017 when I saw Omar again. I was going for a walk along Harbourfront when I spotted him from a distance and thought he looked familiar. We started talking and realized we’d met years ago, so we exchanged numbers. 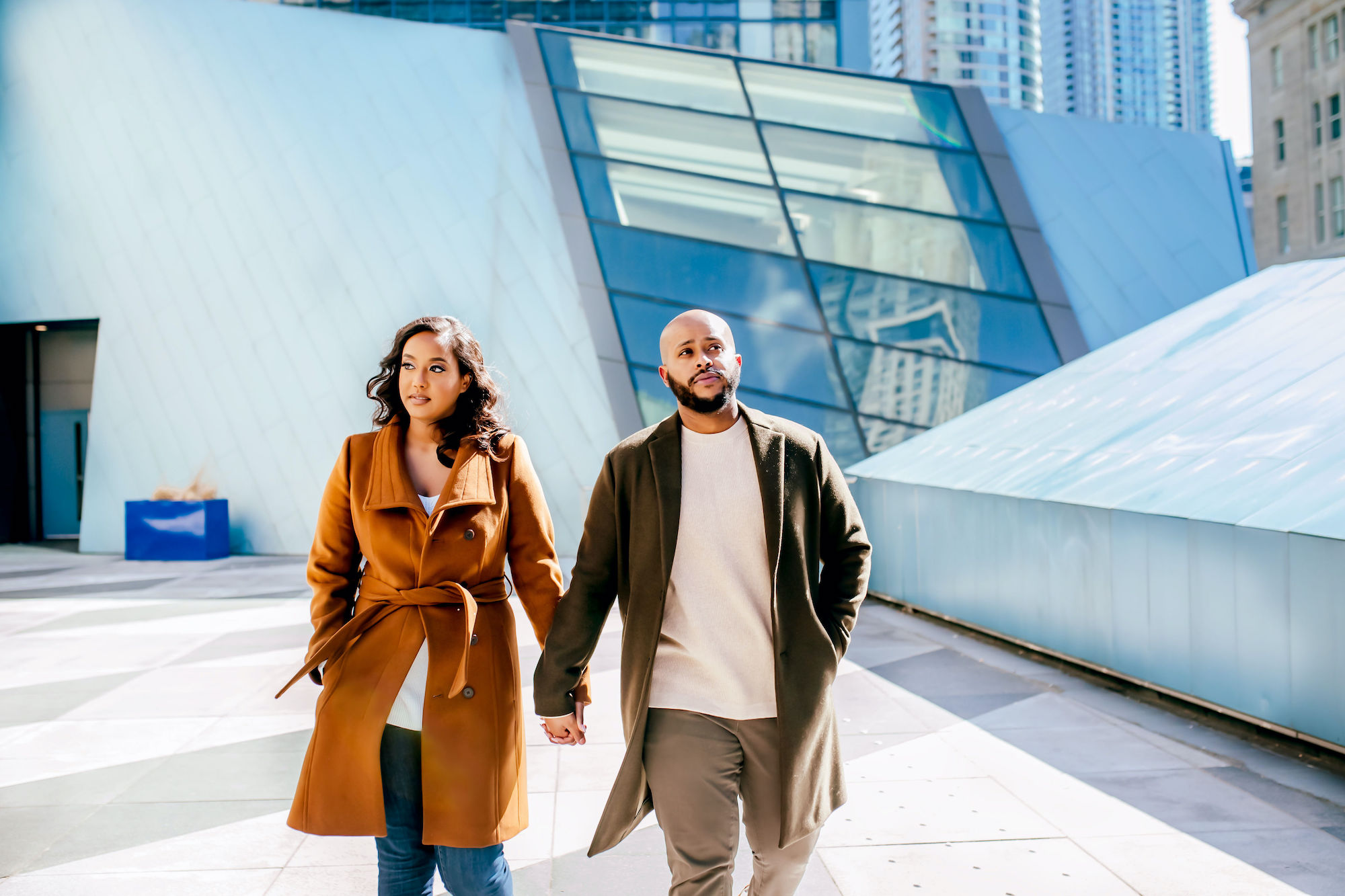 Omar: I was in Toronto visiting family for a few more days, so I asked Yasmin out to dinner at Amsterdam Brewhouse before I left.

Yasmin: The conversation at dinner was so natural. Omar was easy to talk to and very outgoing. He also had an American accent, which I thought was cute.

Omar: Yasmin can be shy, but I like that about her. She’s very friendly and very respectful. And she has a beautiful smile. 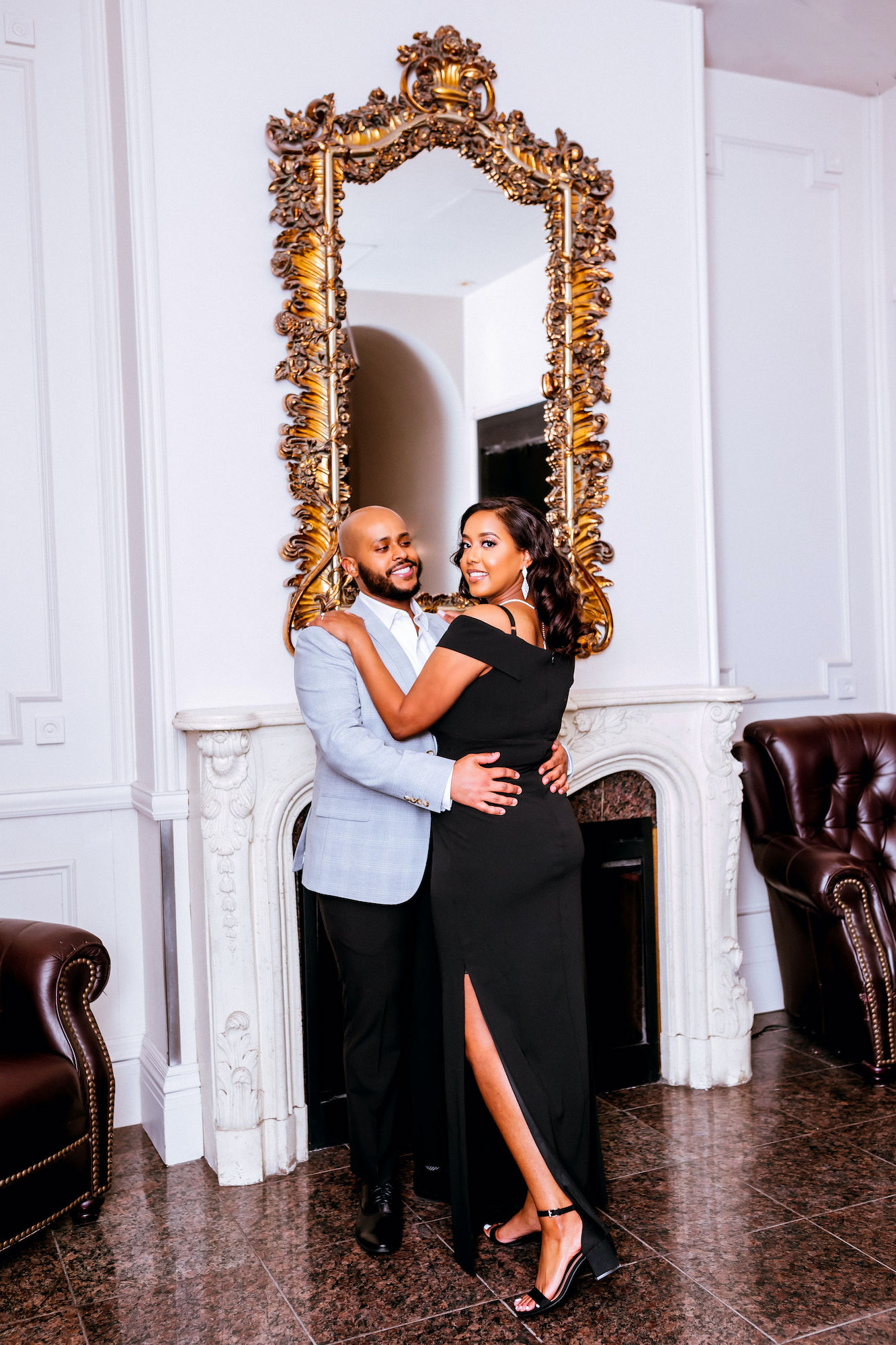 Yasmin: After that dinner, we wanted to keep seeing each other. We continued our relationship long-distance through texts and phone calls, and we’d visit each other every few months and go to dinner, or see a movie or comedy show.

Omar: In the spring of 2019, we started discussing our future. I said, “You’re the one, I’m the one; we’re getting old. Let’s go ahead and do this thing called marriage.” In our culture the father of the groom officially asks the father of the bride for marriage. It’s a little bit old-school, but that’s what we did. 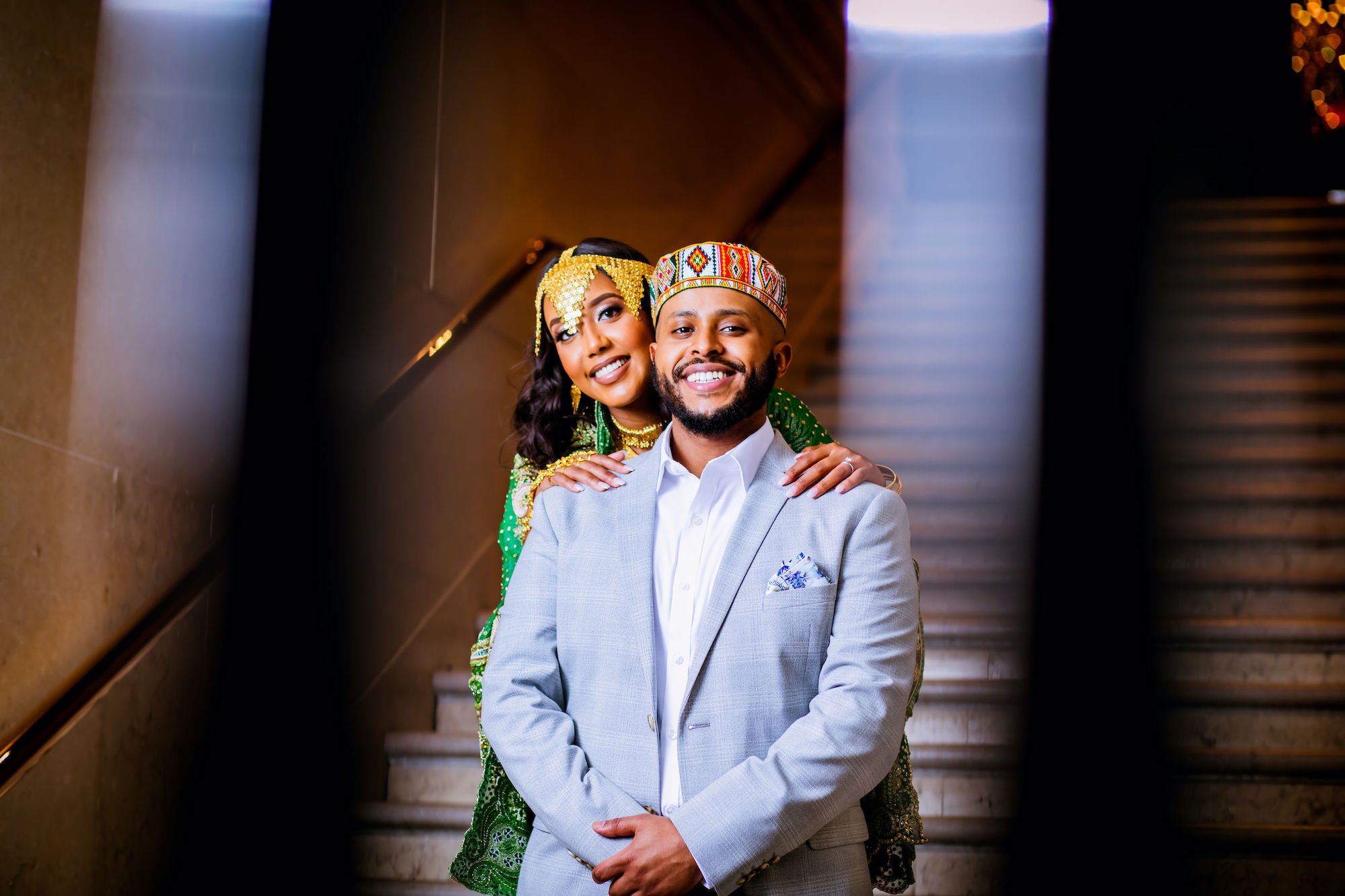 Yasmin: We live in different countries, so we had to figure out who was going to move after the wedding. Omar was more established in his career, so it made sense for me to move to Maryland. We applied for a U.S. fiancé visa, which would take about a year to process, and planned our wedding for summer 2020.

Originally, the wedding was going to be over three days with about 250 guests. The first day would include an Ethiopian reception and a religious ceremony, called a nikkah, which is a traditional agreement where the groom tells the bride’s family, “I will take care of your daughter.” On the second day, we’d have a cultural hair-tying ceremony, which signifies that the bride is a married woman. Then we’d have a pretty standard wedding reception.

Omar: As soon as we got engaged, we got right into planning. We booked our venues—a banquet hall in Markham for the traditional ceremony and another in Woodbridge for the reception. The hair-tying ceremony would take place at Yasmin’s family home in Whitby. We also booked our honeymoon: a week in Cabo.

Yasmin: When the pandemic started, we weren’t sure how long it was going to last. Then our venues wouldn’t let us reschedule until two months before the wedding date. In May 2020, we postponed our wedding to October. We postponed again to March 2021 and again to September. 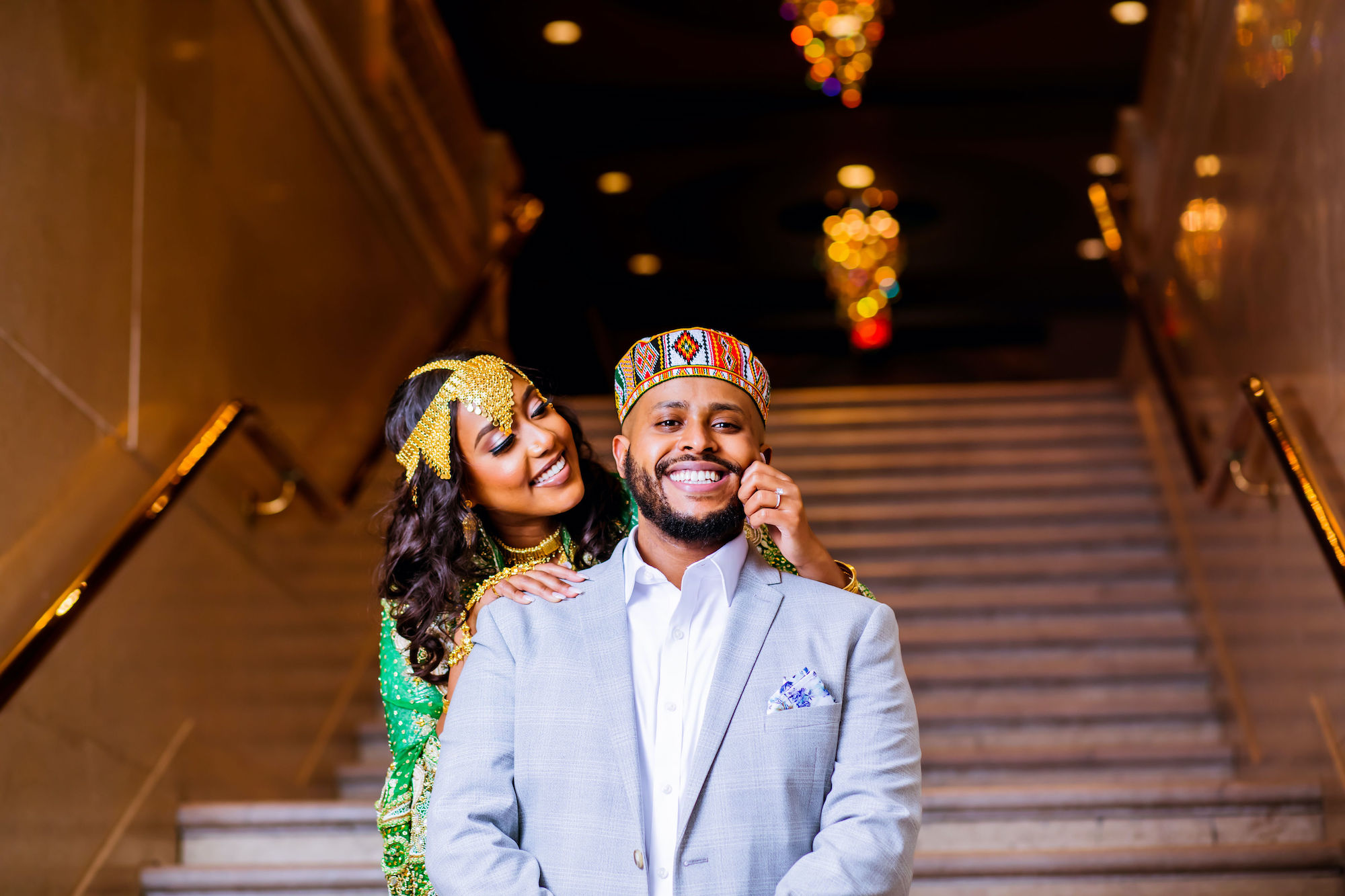 Omar: The border closures were a big challenge for us too. I had gone to visit Yasmin in March 2020, right before the pandemic happened. Then we didn’t see each other again for seven months.

Yasmin: By August, my visa still hadn’t arrived. It was delayed because of Covid, and we got fed up with waiting and hoping. Since Omar was working from home, we figured he could move here instead. But in order for him to come to Canada, we needed a marriage certificate.

Omar: In October, we did a nikkah via Zoom. I was still in Maryland and Yasmin was in Toronto. I wore a suit that I had bought at Macy’s a few years ago, and I had an imam and a few family members come to my house for the ceremony. Yasmin’s family gathered at a banquet hall in Ajax. We had about 20 guests attend over Zoom.

Yasmin: I wore a shiny red Ethiopian outfit that a family member from back home had send me before the pandemic. Normally, the nikkah is a big step to take, but we were doing it in a nonconventional way. We were both excited and a little bit nervous. After the ceremony, I felt relieved. We’d waited so long to be together. I was seeing the light at the end of a very long tunnel. My friends threw me a surprise bonfire, and they even had a cardboard cutout of Omar.

The next month, on Omar’s birthday, I flew down to Maryland for the legal courthouse ceremony. It was just the two of us; a staff member at the courthouse served as our witness. When we were done, we were too busy to celebrate since Omar was packing up to move. A few days later, we flew up to Toronto together. We moved right into a condo in Oshawa that I had prepared in advance for a two-week quarantine.

Omar: It was a relief to finally be in the same place, under the same roof and living together. Of course, it will take some time get used to living with each other and being a couple in real life after so much time apart. But we’re appreciating and enjoying every part of it. 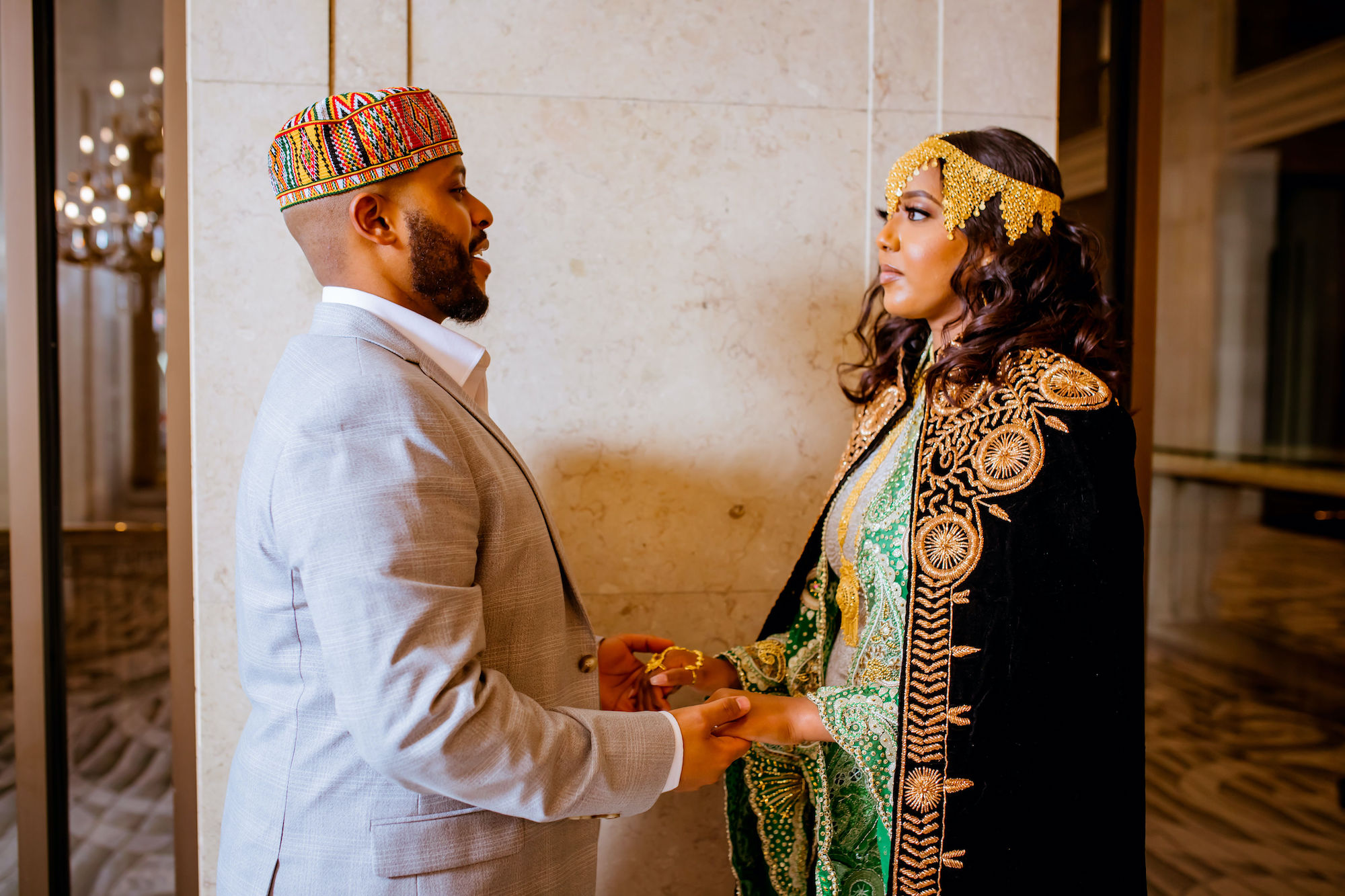 Yasmin: In March, we did a photo shoot to celebrate our wedding at One King West. Our wedding planner, Nia, helped to pull it all together.

Omar: We had a few shots where we wore traditional outfits similar to what we wore the day of our nikkah. So it was almost like those were our replacement photos for that day.

Yasmin: We’ve made it past the most difficult phase of being a long-distance couple through the pandemic. Now I’m excited to have our big reception and celebrate with everyone when it’s safe to do so. 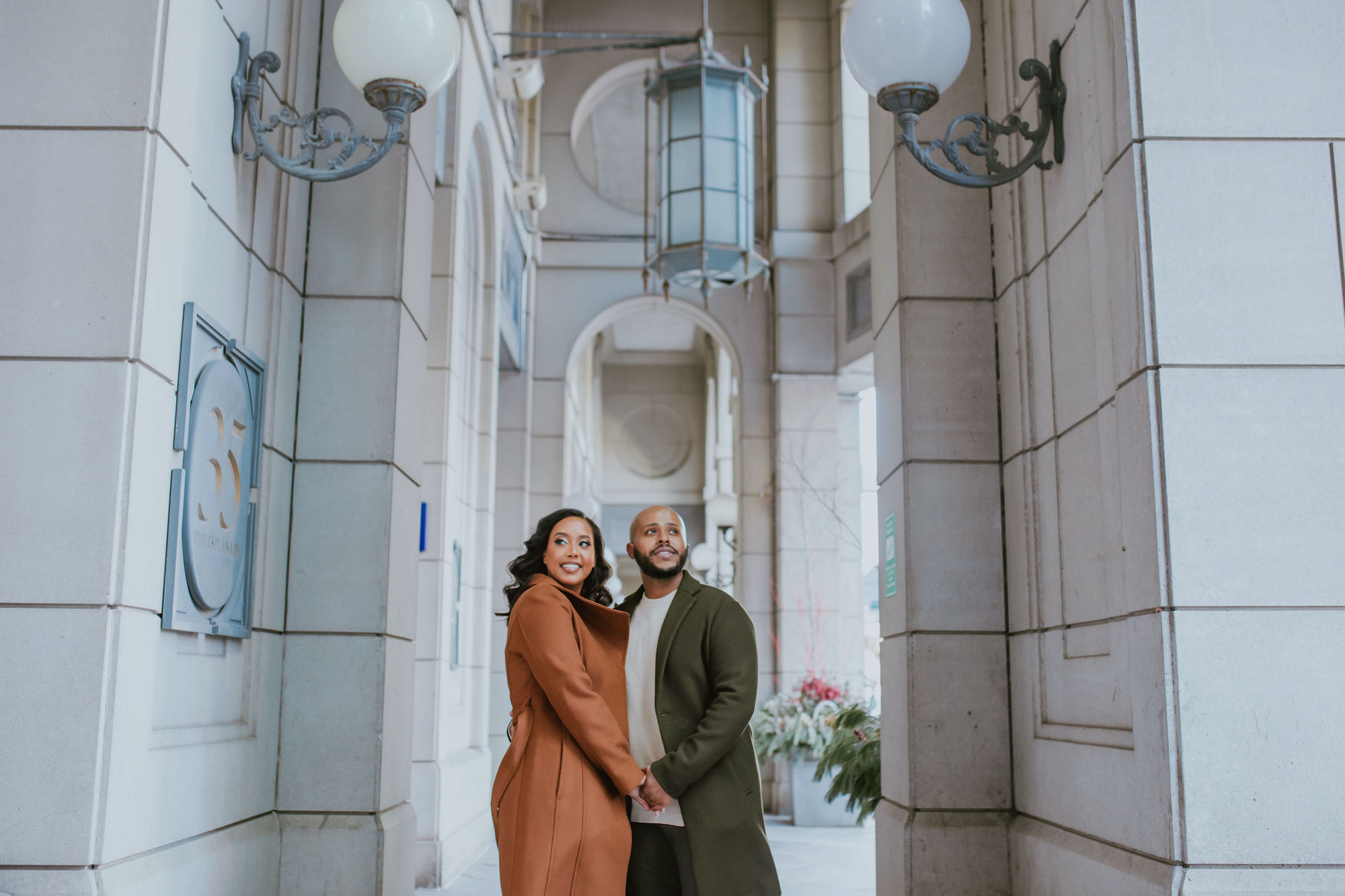 Omar: We’re currently scheduled for a September 2021 wedding. We’ve downsized to 100 guests in the hopes that we can proceed with that. We’re still nervous about whether it’s going to happen, but we’re feeling optimistic.

Yasmin: If we still can’t have our wedding in September, we’ll just cancel instead of postponing for the fourth time. We are still aiming on a honeymoon later this year. Instead of Cabo, we’re thinking of going somewhere further—Hawaii, maybe, if Covid restrictions will allow for it. 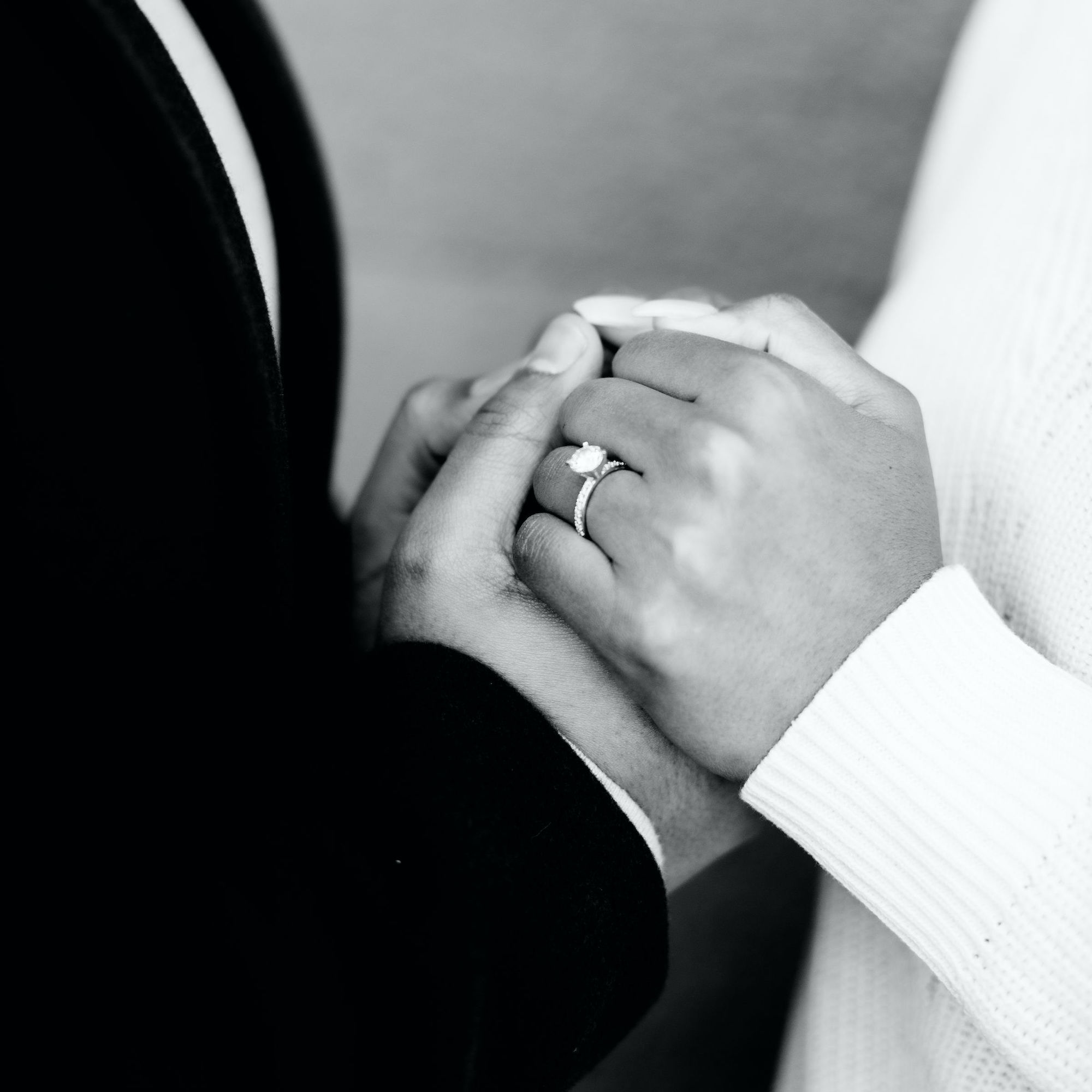 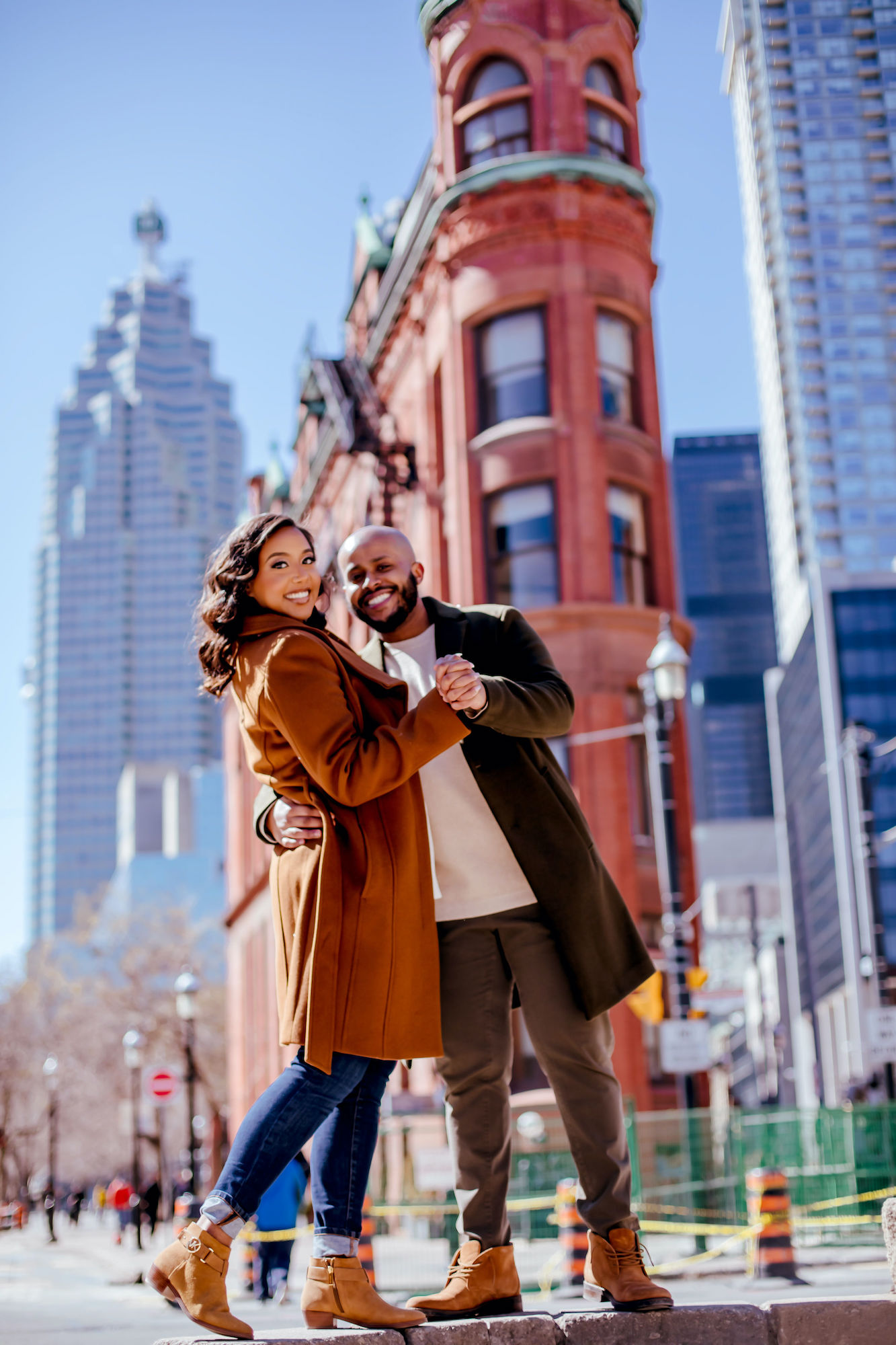 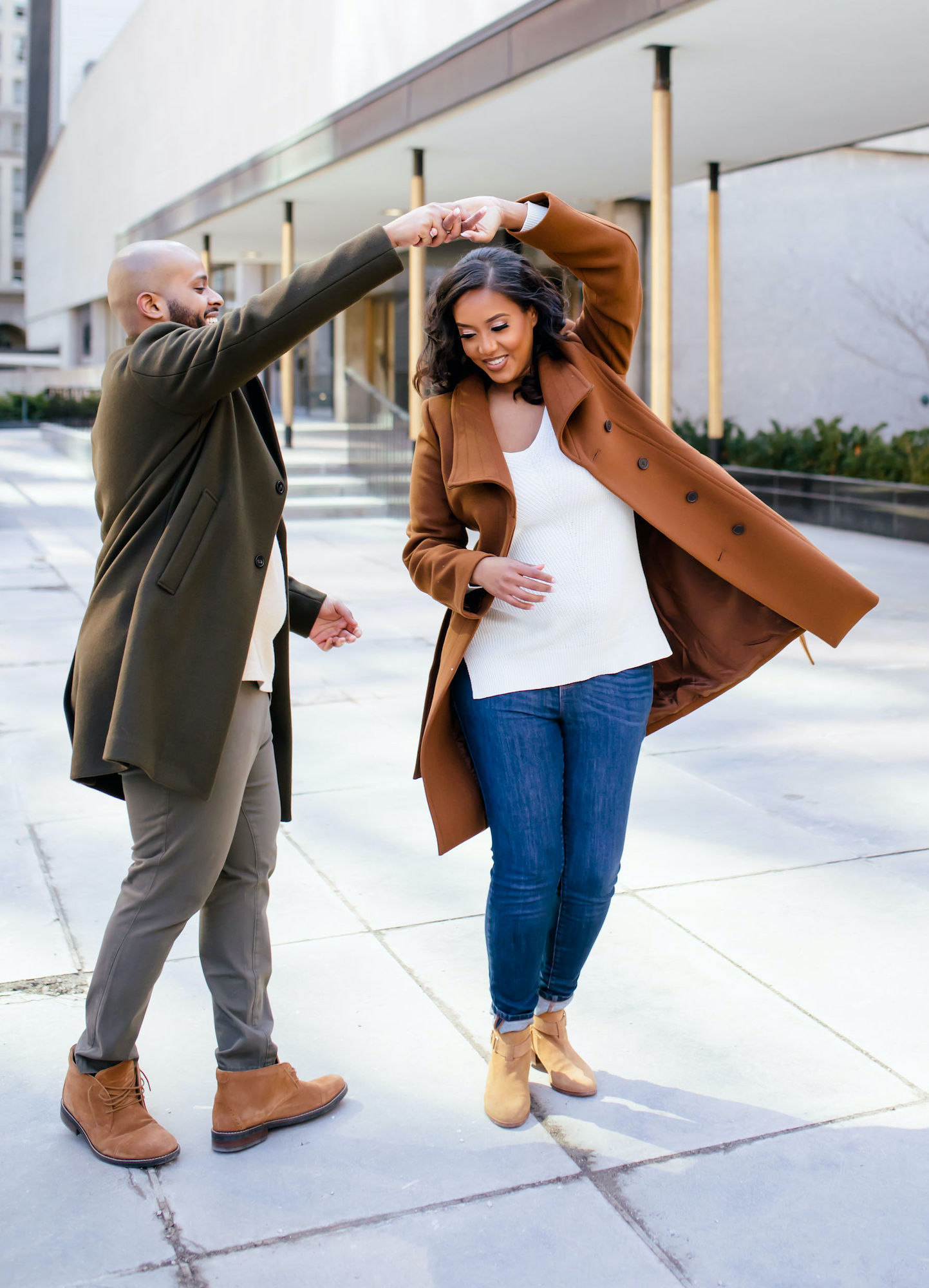 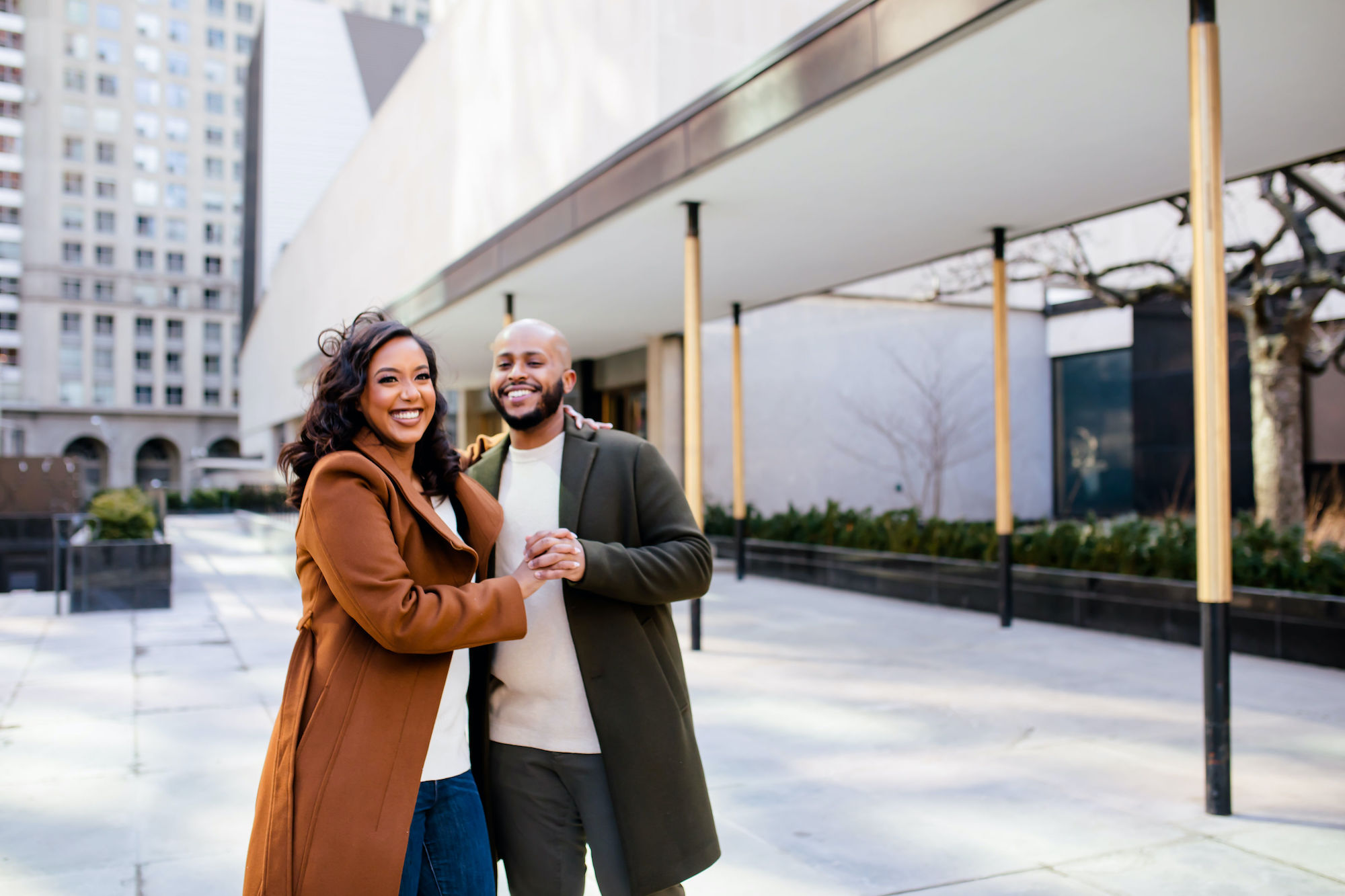 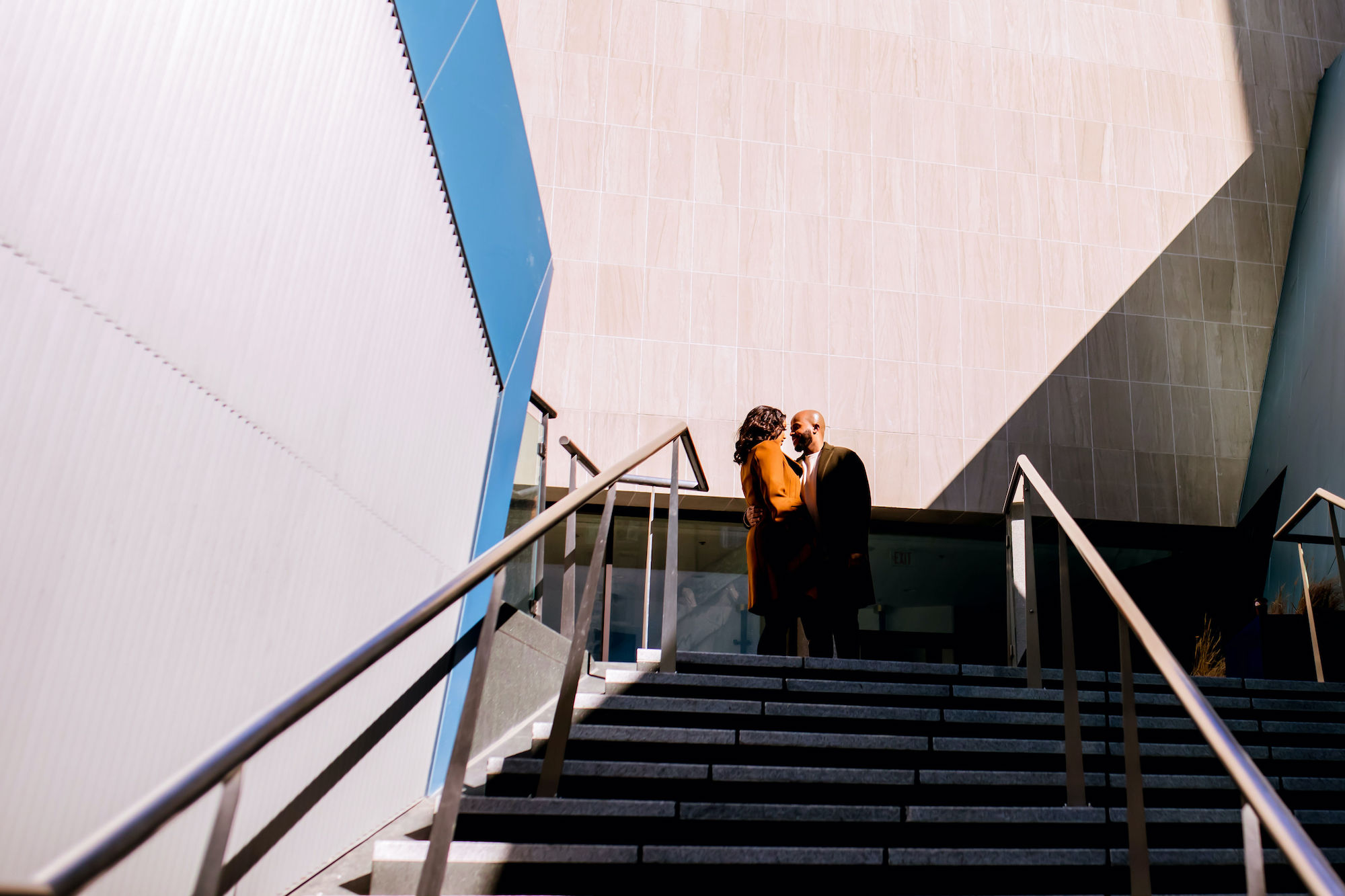 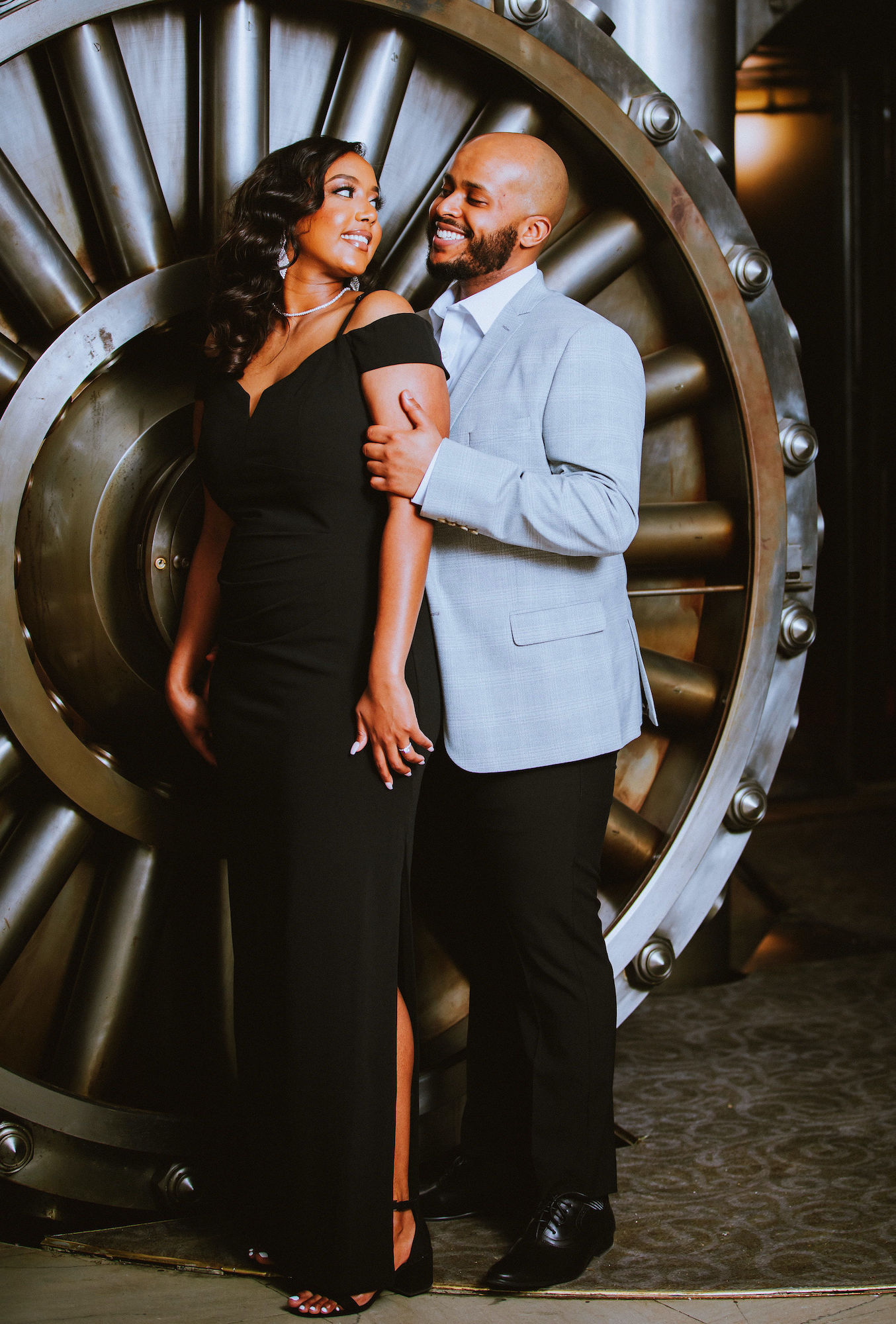 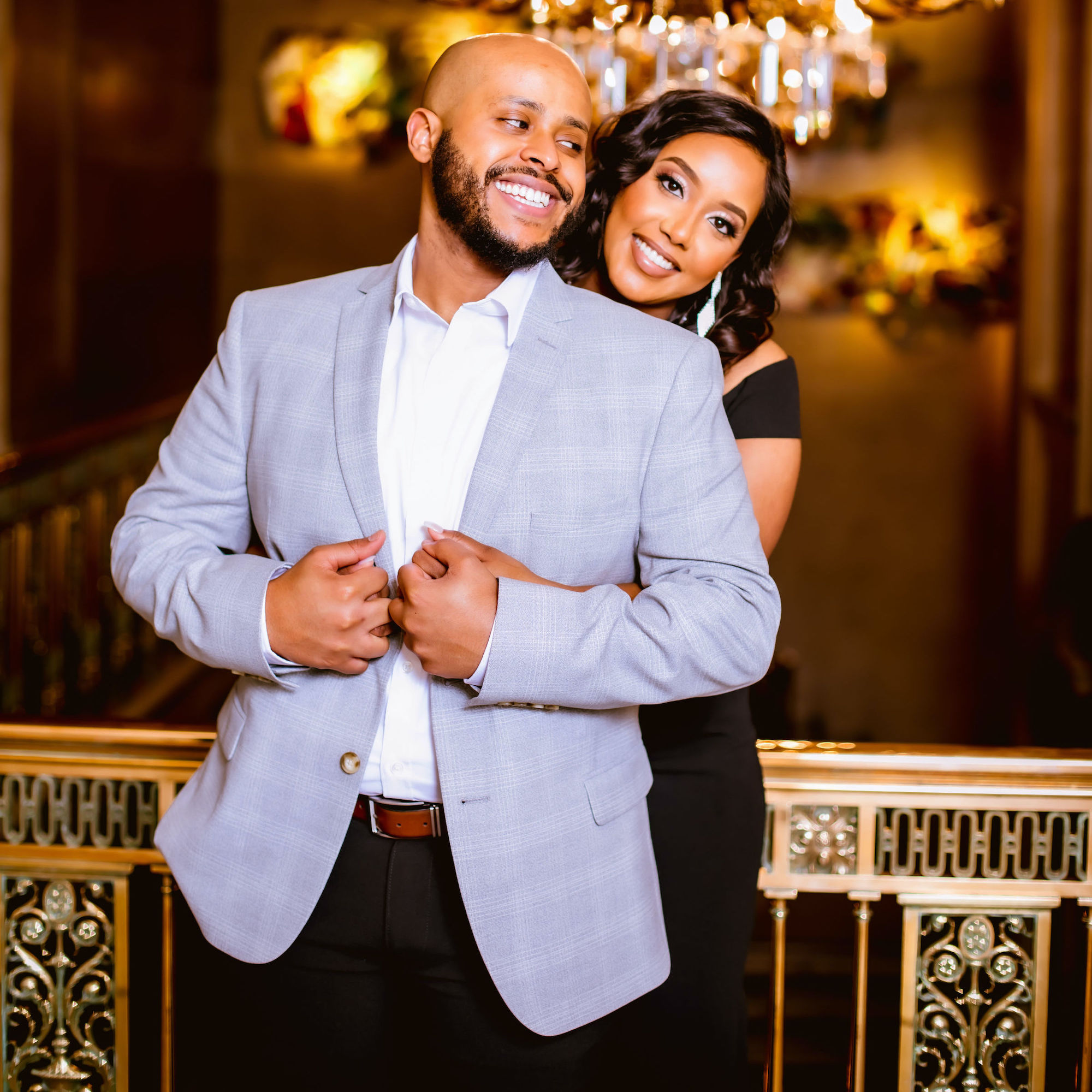 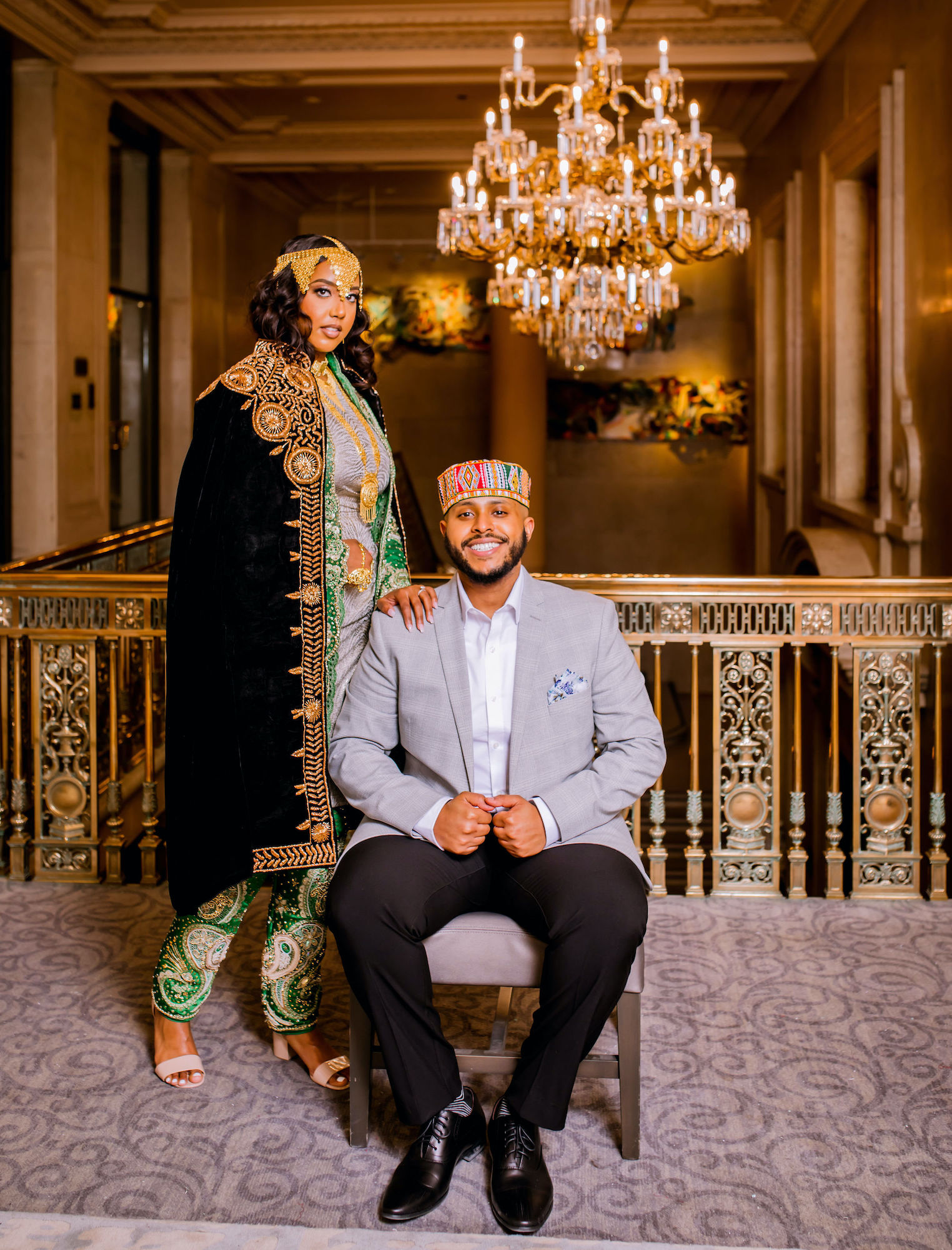 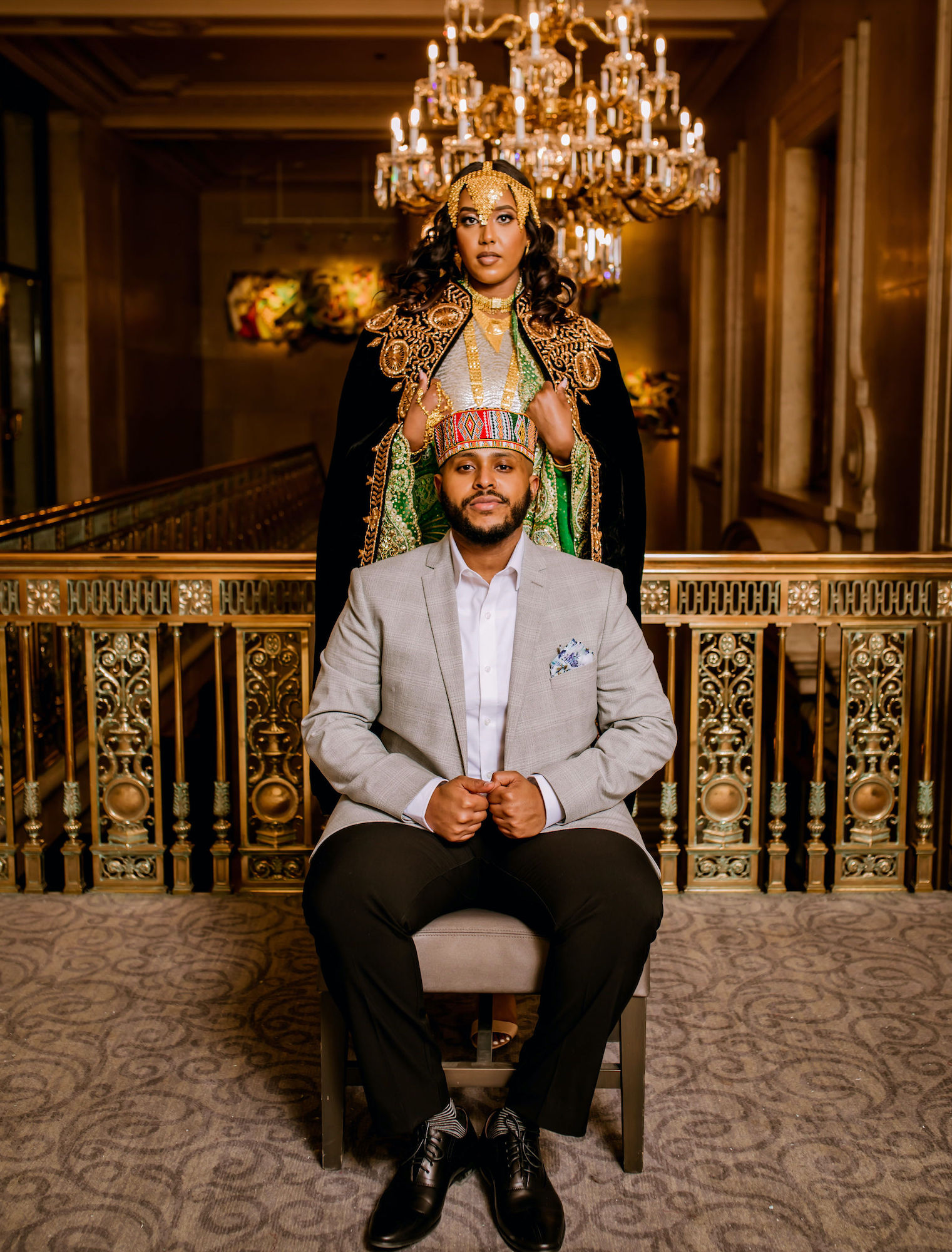 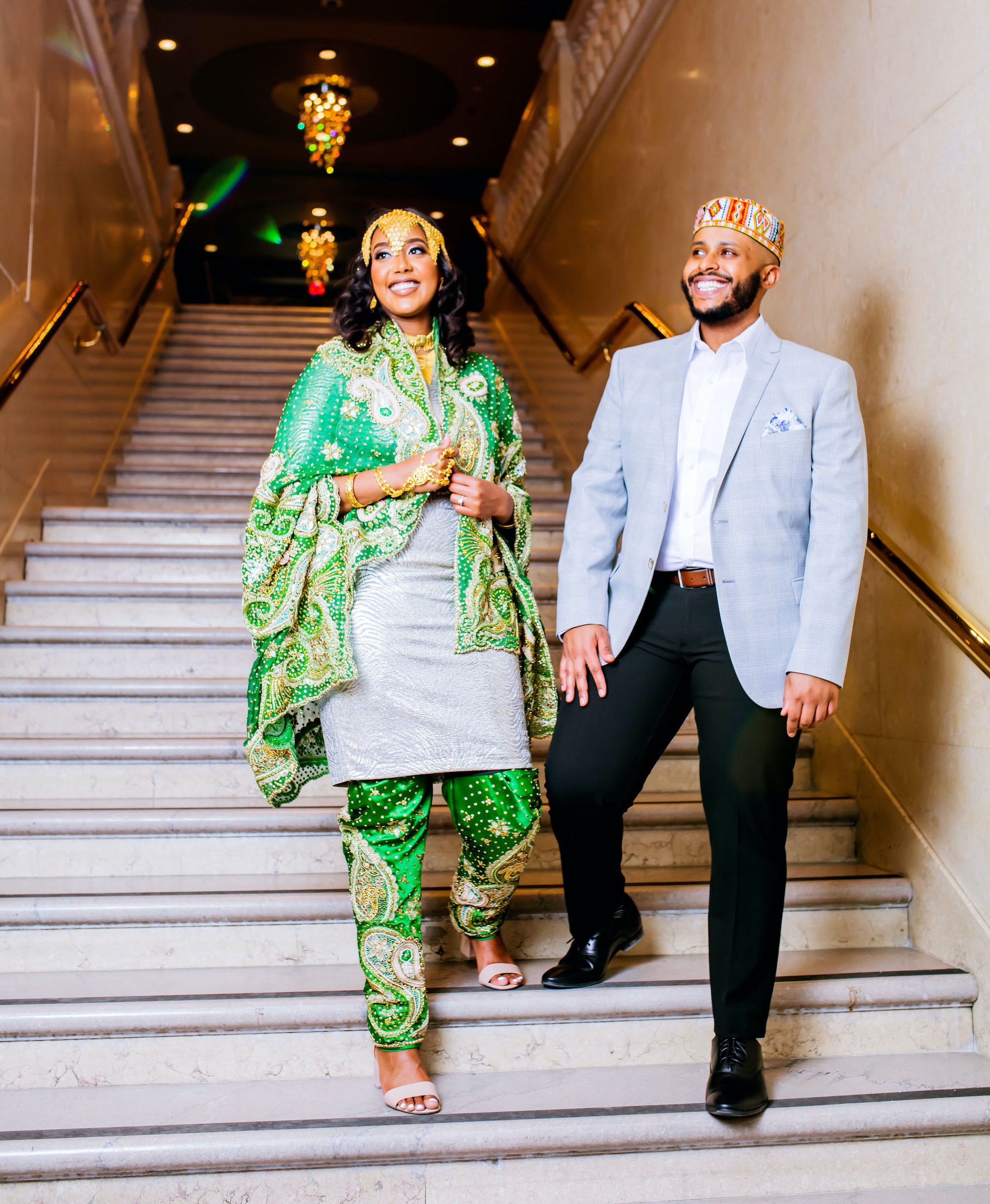 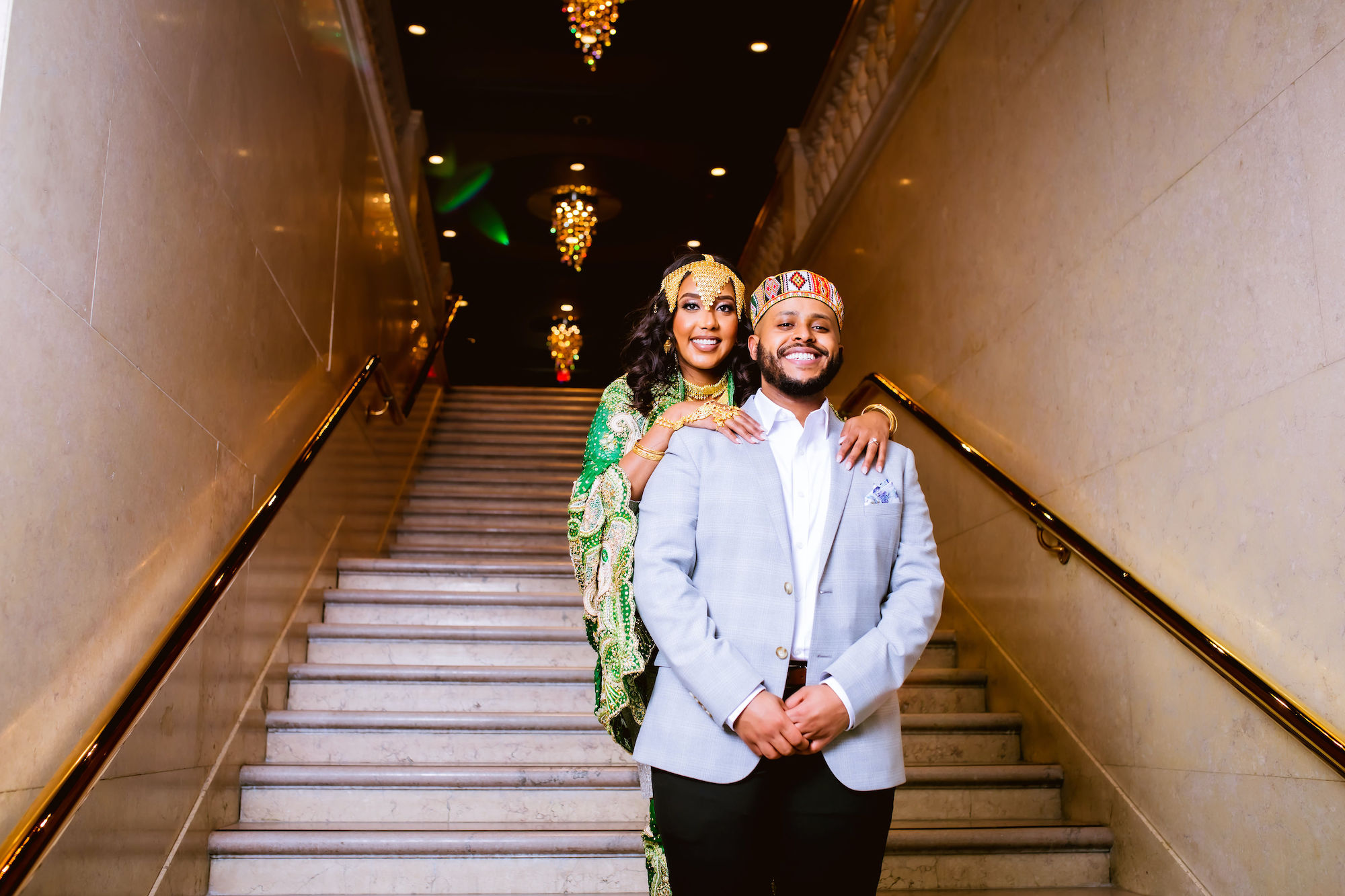 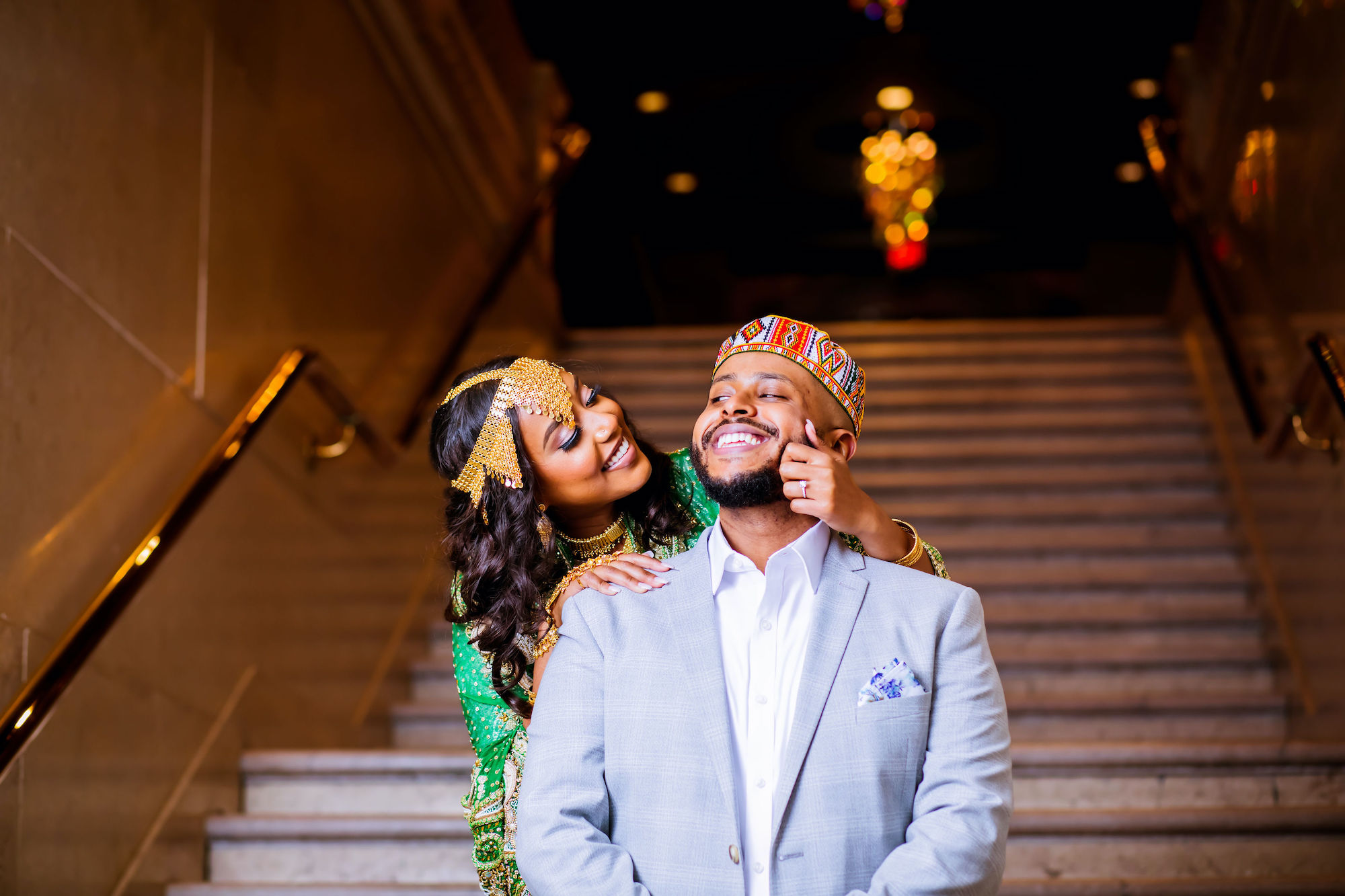 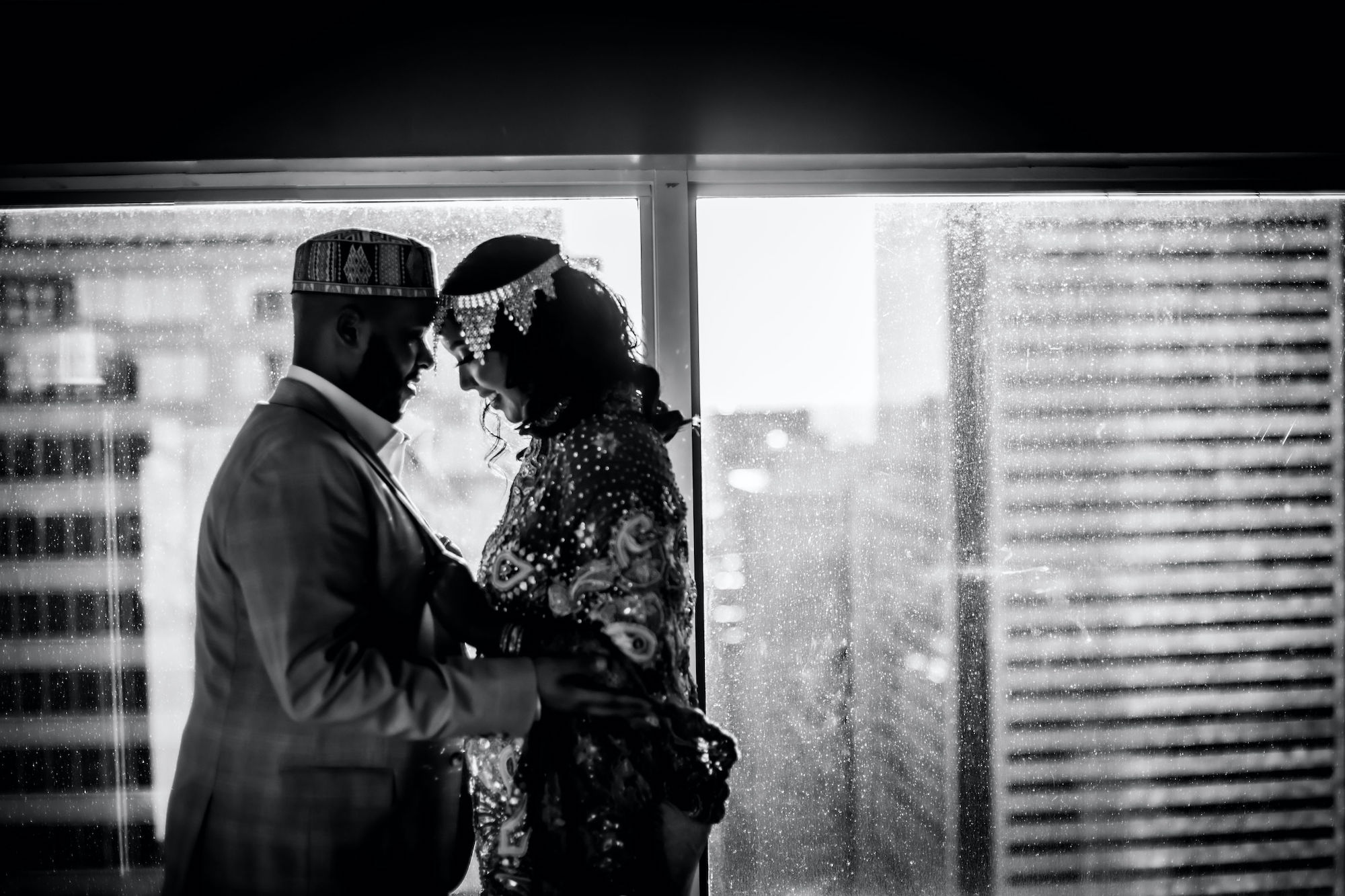 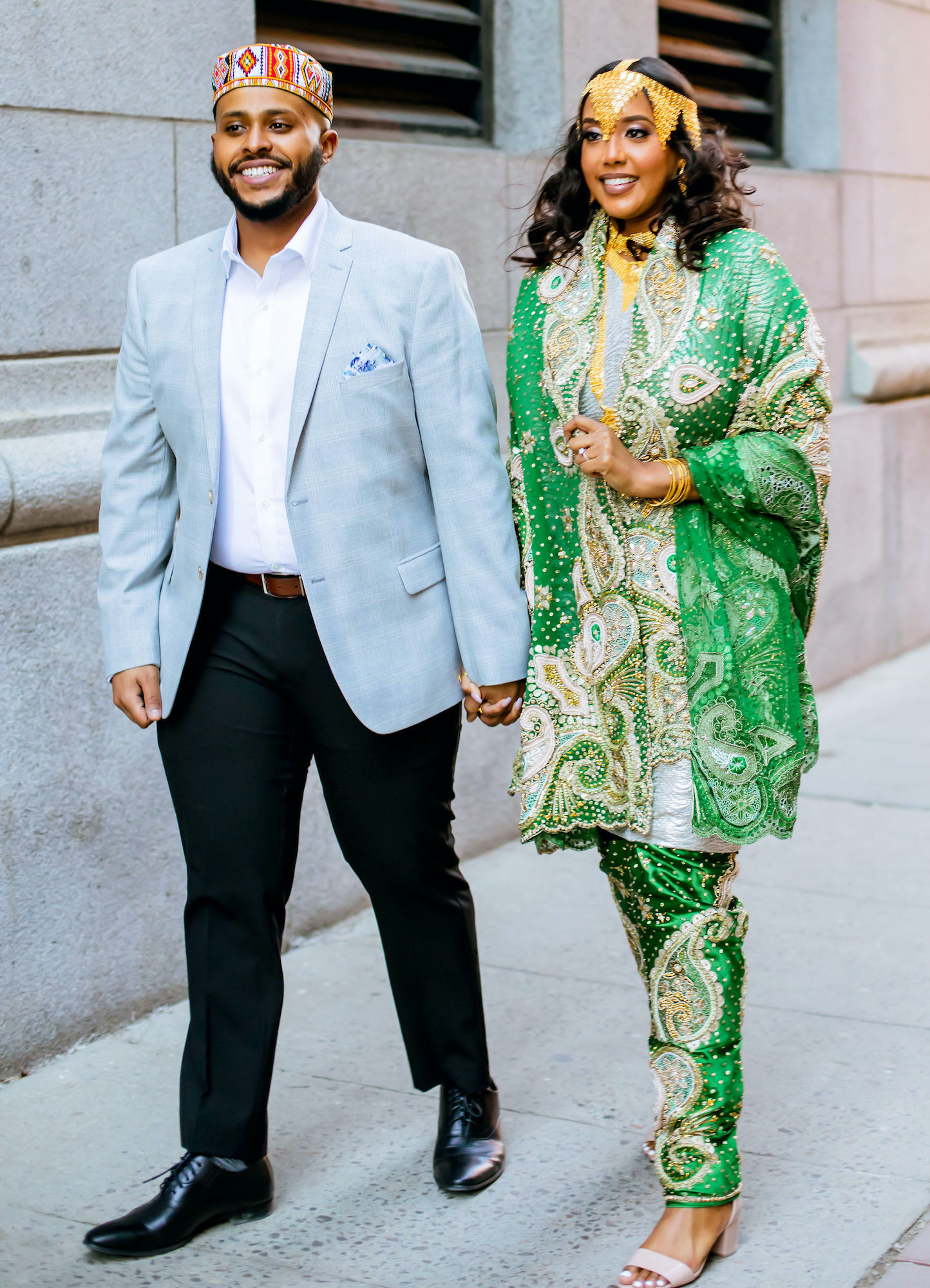