I was 18 the first time I bought marijuana. The exact circumstances are hazy in my memory, for obvious reasons, but I remember that it felt seedy. I had a friend who worked at a KFC where one of the fry cooks dealt weed on the side. I waited for a few minutes at the back of the restaurant, near a fenced-off area by the dumpster, until my friend came out with three grams of crumbly plant material in a styrofoam KFC-branded gravy container.

Two weeks ago, I bought weed from the Ontario government.

The Ontario Cannabis Store, the government’s weed retail website, will be the only legal source of recreational marijuana in the province until Doug Ford’s government follows through on its plan to license private retailers to run brick-and-mortar marijuana shops. The OCS website looks like it was done by the people behind SkyMall. The colour scheme is all anodyne neutrals. The product pages don’t have any photos of marijuana buds. Instead, there are shots of medicinal-looking packaging festooned with neon yellow labels that say things like, “WARNING: Up to 1 in 2 people who use cannabis daily will become addicted.” A lot of people will like those odds.

But the OCS can’t entirely escape the hedonism of weed culture. The Ontario government is now in the business of selling products with names like “Easy Cheesy” and “Kinky Kush.” There’s a selection of government bongs. Even as the province continues to warn that marijuana is a potential health hazard, the Ontario Cannabis Store is selling $429 weed humidors. Prohibition may be over, but, if the early going is anything to judge by, head-spinning government hypocrisy is not.

Stylistic critiques aside, the buying process was easy. All the order processing is being handled by Shopify, an Ottawa-based tech giant with a vested interest in ensuring that the early days of legal weed retail are as smooth as the draw on a Marley Natural Smoked Glass Water Pipe ($250 from the Ontario Cannabis Store). After some fumbling with the OCS interface—which makes it surprisingly hard to figure out whether you’re ordering loose bud, rolled joints or some kind of weird THC-infused mouth spray, because all the packaging looks the same—I managed to add a couple things to my cart. I ordered a gram of MK Ultra, from Aurora, because I’d read a lot about the company’s surging stock prices and was curious about their product. And I also grabbed a gram of God Bud, from Redecan, because that’s a hell of a product endorsement. (But I mean, God is no Snoop Dogg.)

I had my marijuana shipped to the Toronto Life offices, my workplace, because there are no rules anymore and we’re basically living in a permanent, weed-specific version of The Purge—and also because I’m here all day and the OCS is currently refusing to deliver marijuana unless each package is signed for by someone aged 19 or older. The total cost of my two-gram purchase, including tax and shipping, was $25.45. The OCS initially promised delivery within three business days. Mine took nine. (Although, to be fair, my weed appears to have spent a day or two cooling its heels in a mail sorting facility as a result of the ongoing Canada Post labour disruption, which wasn’t the OCS’s fault.) It was all worth it to see the smiles on my co-workers’ faces as I unboxed my formerly illegal drugs in the middle of the office. Here’s what that looked like.

Considering the amount of marijuana I ordered—two grams—the box seemed very large. It was a cube, about eight inches on each side, with no labelling to hint at its contents (aside from a very prominent warning that it needed to be signed for by someone 19 or older): 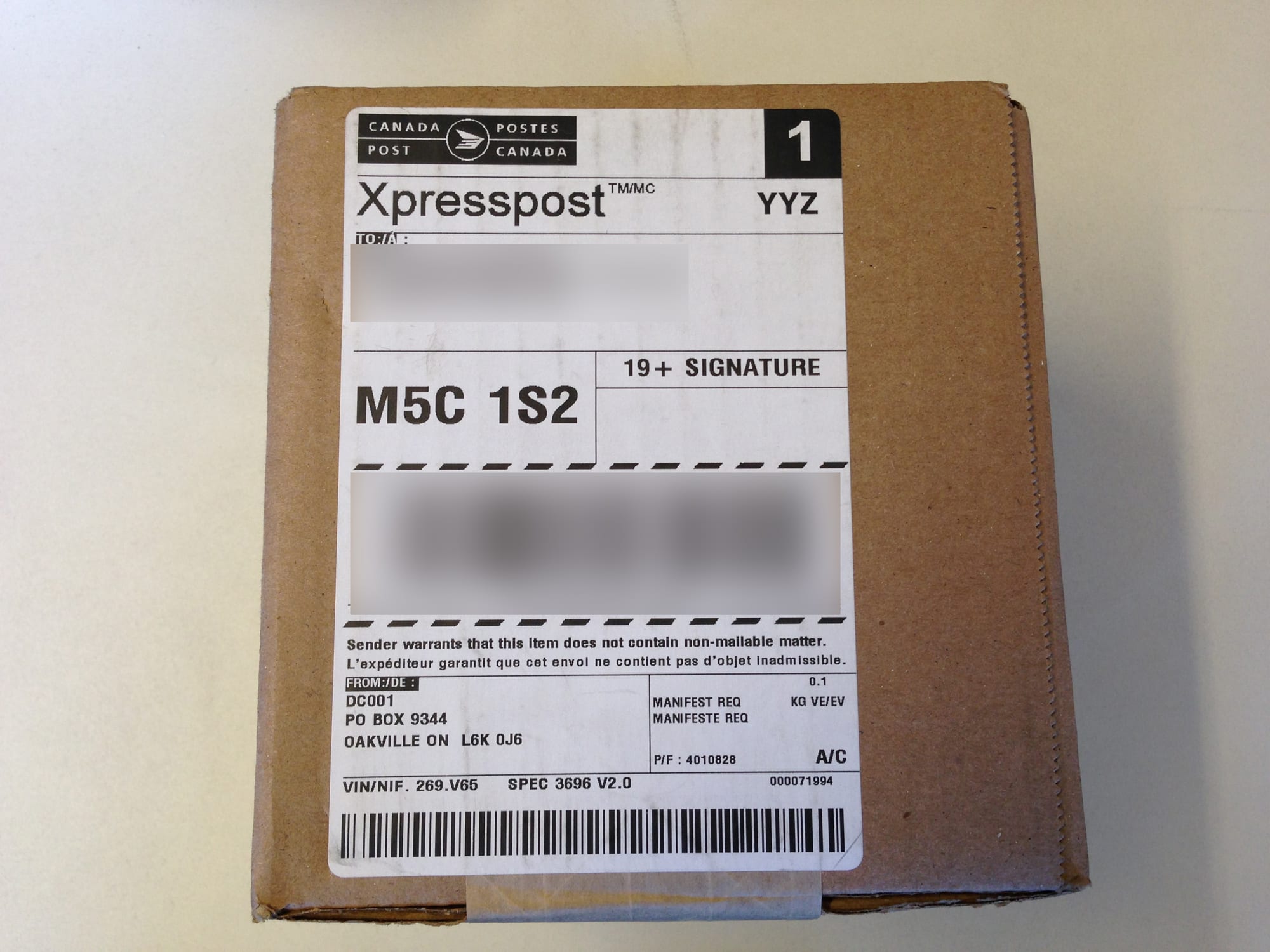 A bit of kraft paper to fill the void inside the box: 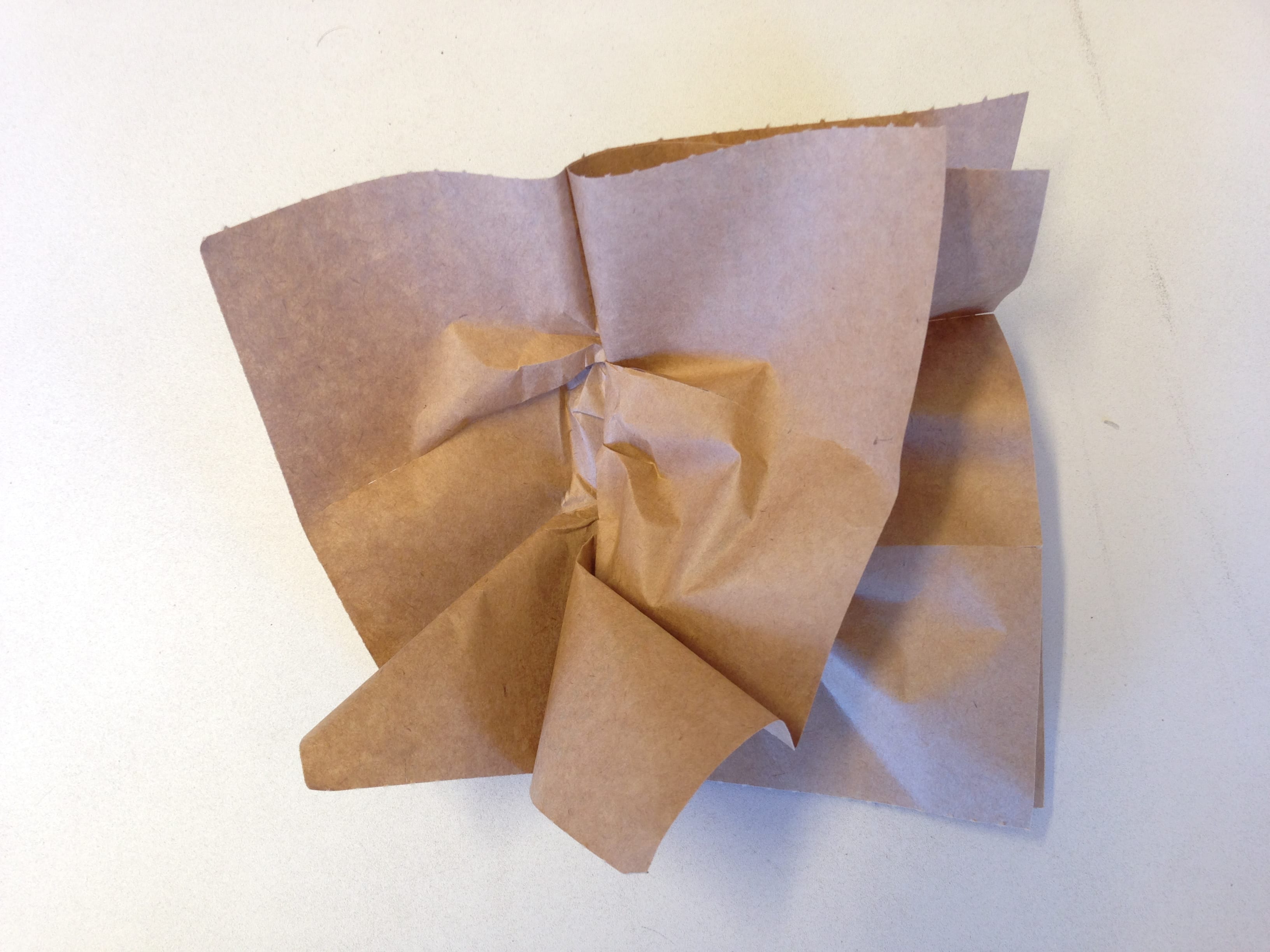 A handy leaflet, in both official languages, telling me all about the dangers of cannabis and the legal repercussions of buying or using it improperly. Consider me warned: 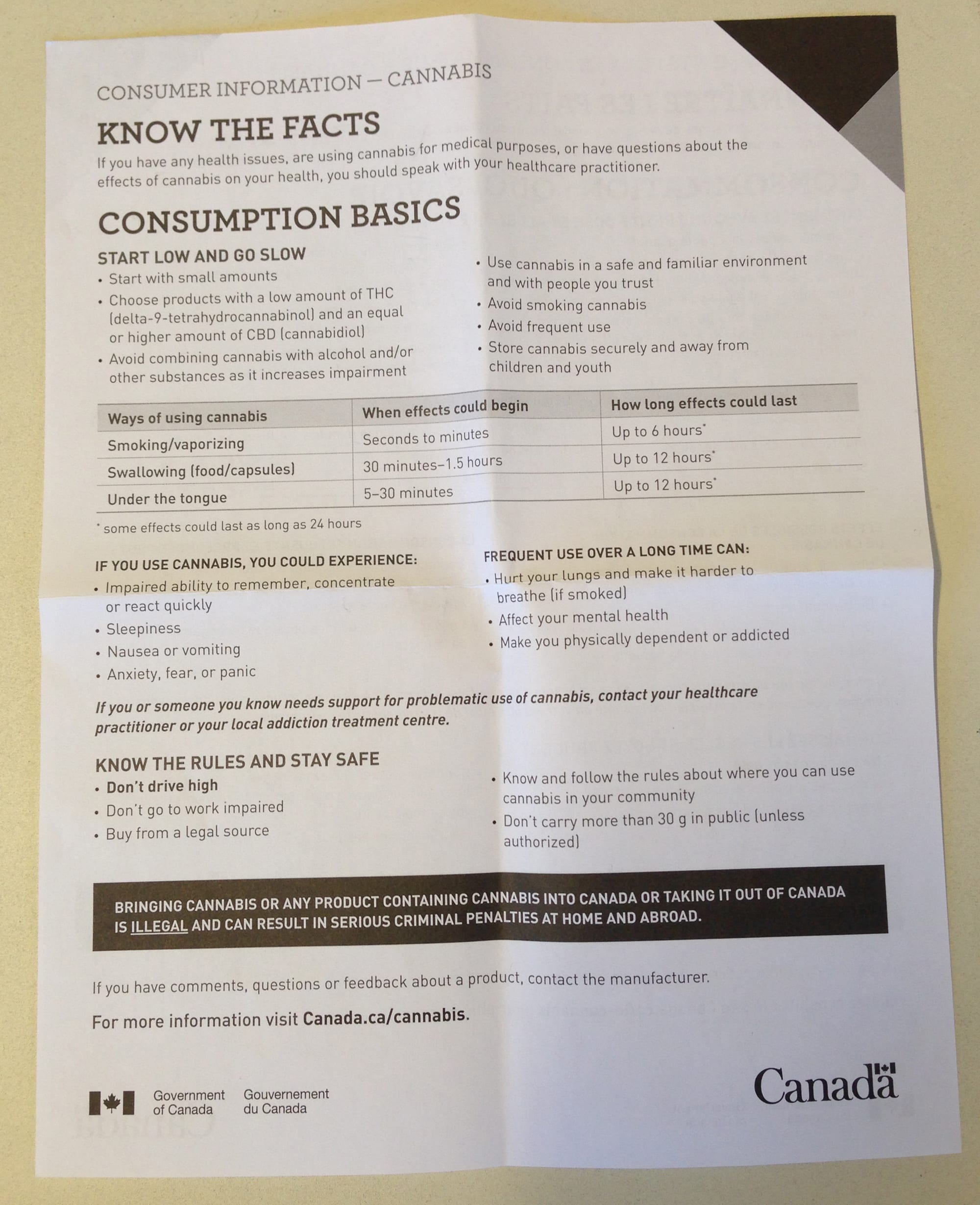 And here’s the marijuana our government reluctantly mailed to me. Aurora Cannabis is an Edmonton-based company with a market cap of about $7.5 billion. This palm-sized box contains one gram of a product of theirs called “MK Ultra,” a reference to a series of cruel and unethical cold-war-era CIA mind-control experiments. Classy: 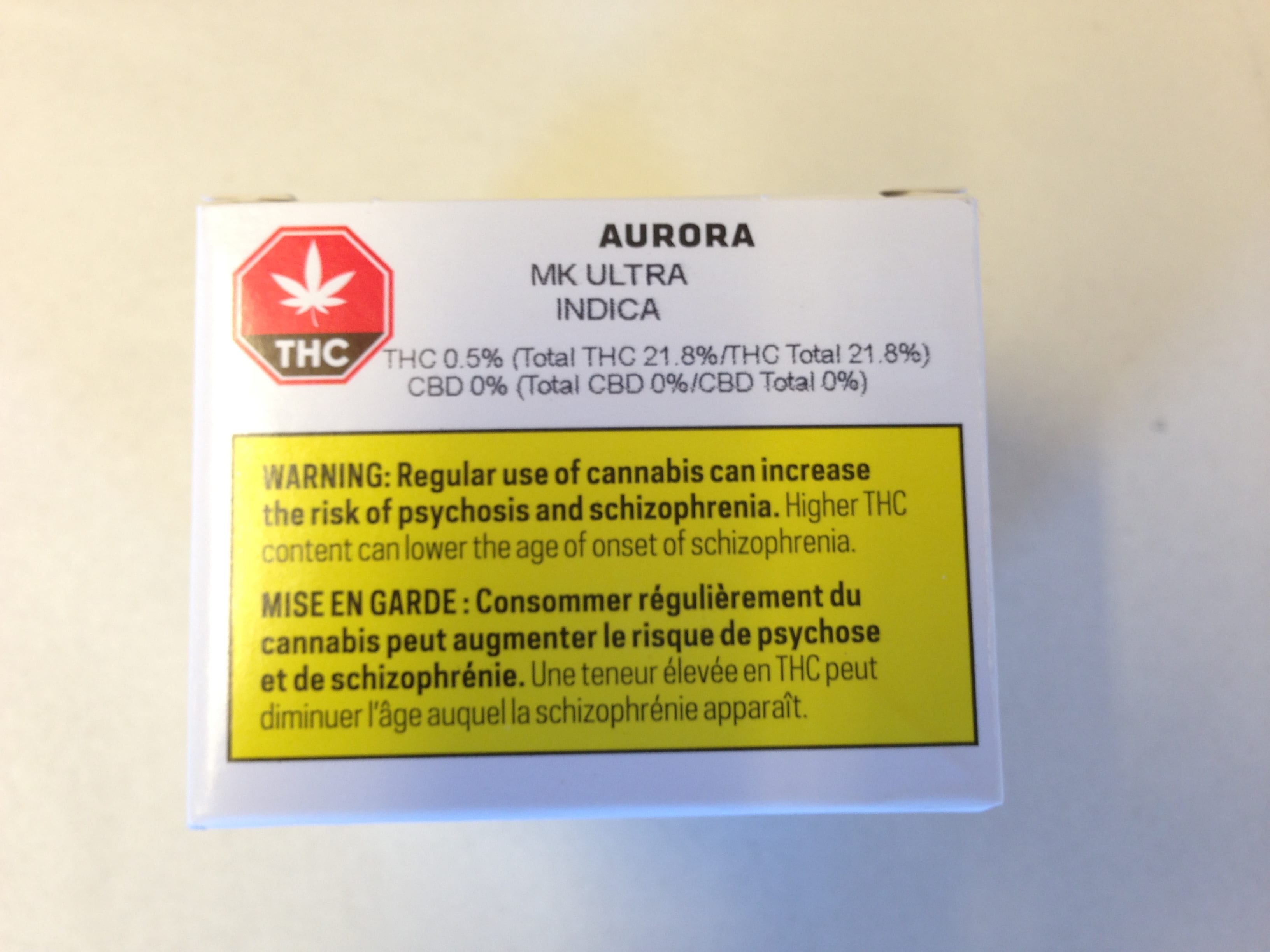 This box, about the size of a tube of lipstick, contains one gram of God Bud, from Ridgeville, Ontario-based Redecan: 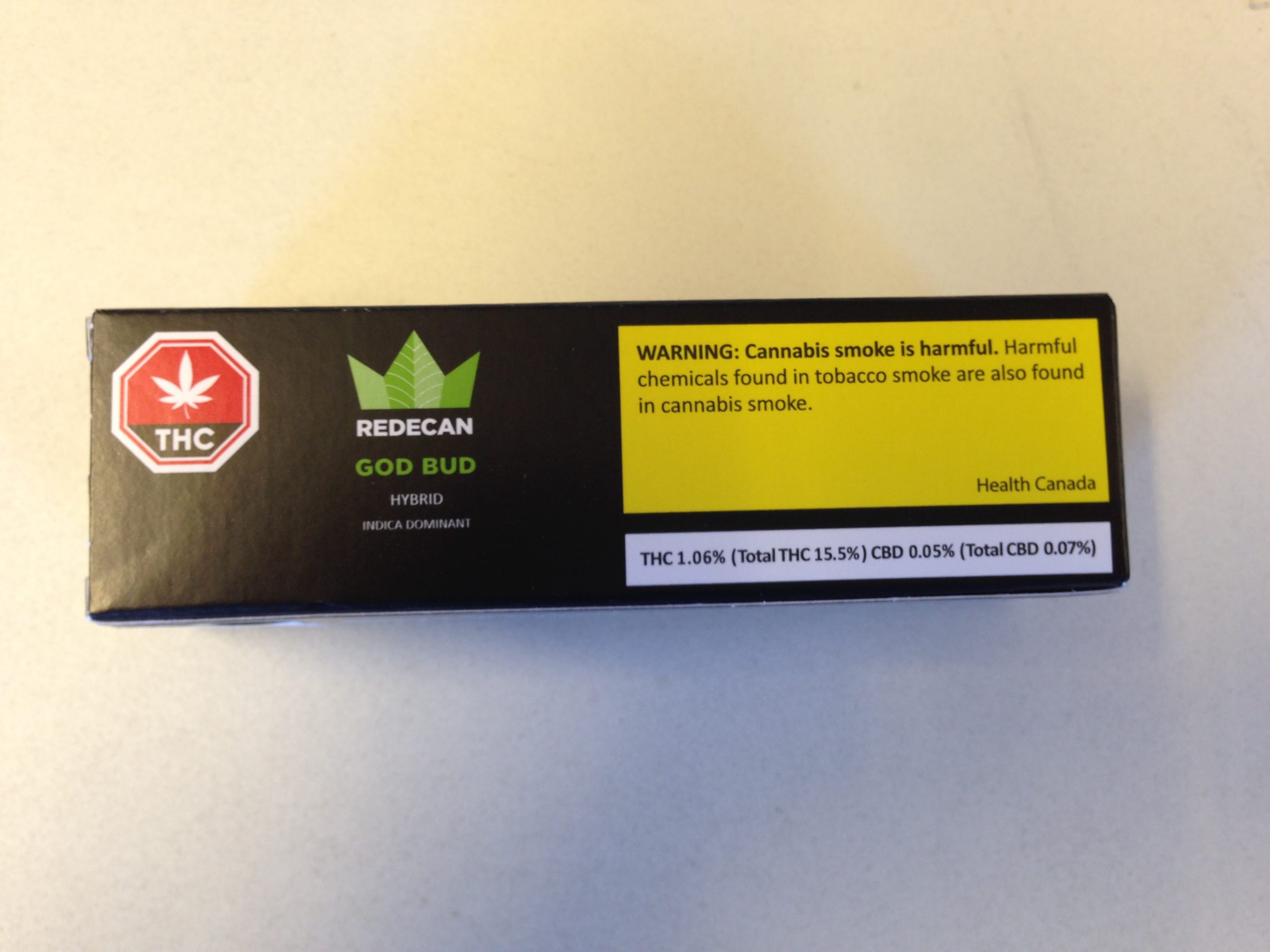 Each box is sealed with a holographic excise stamp: 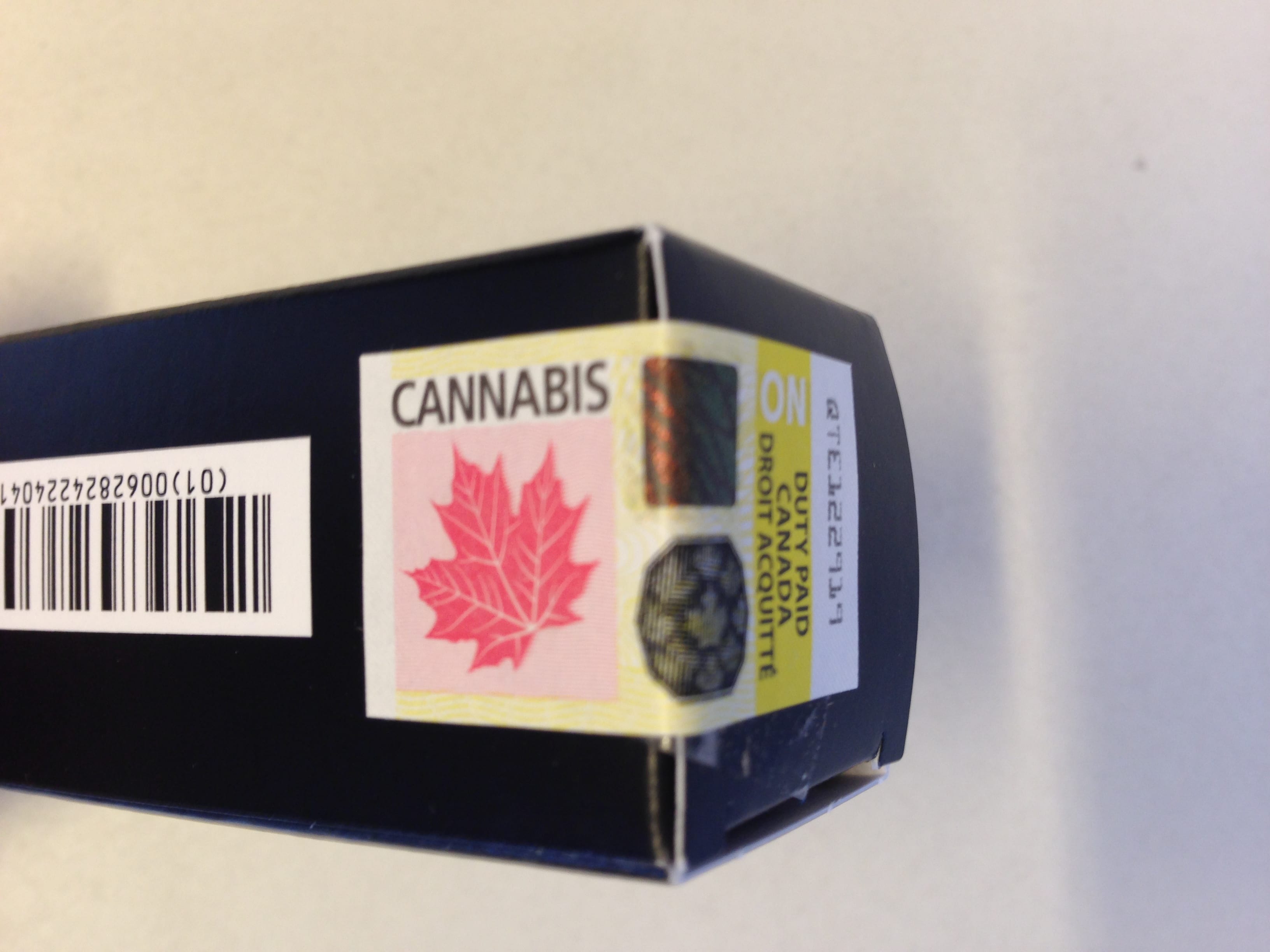 Inside the box, my God Bud was sealed in a film-cannister-sized container with a childproof top. The warning sticker was so huge that it dangled off the side of the cylinder: 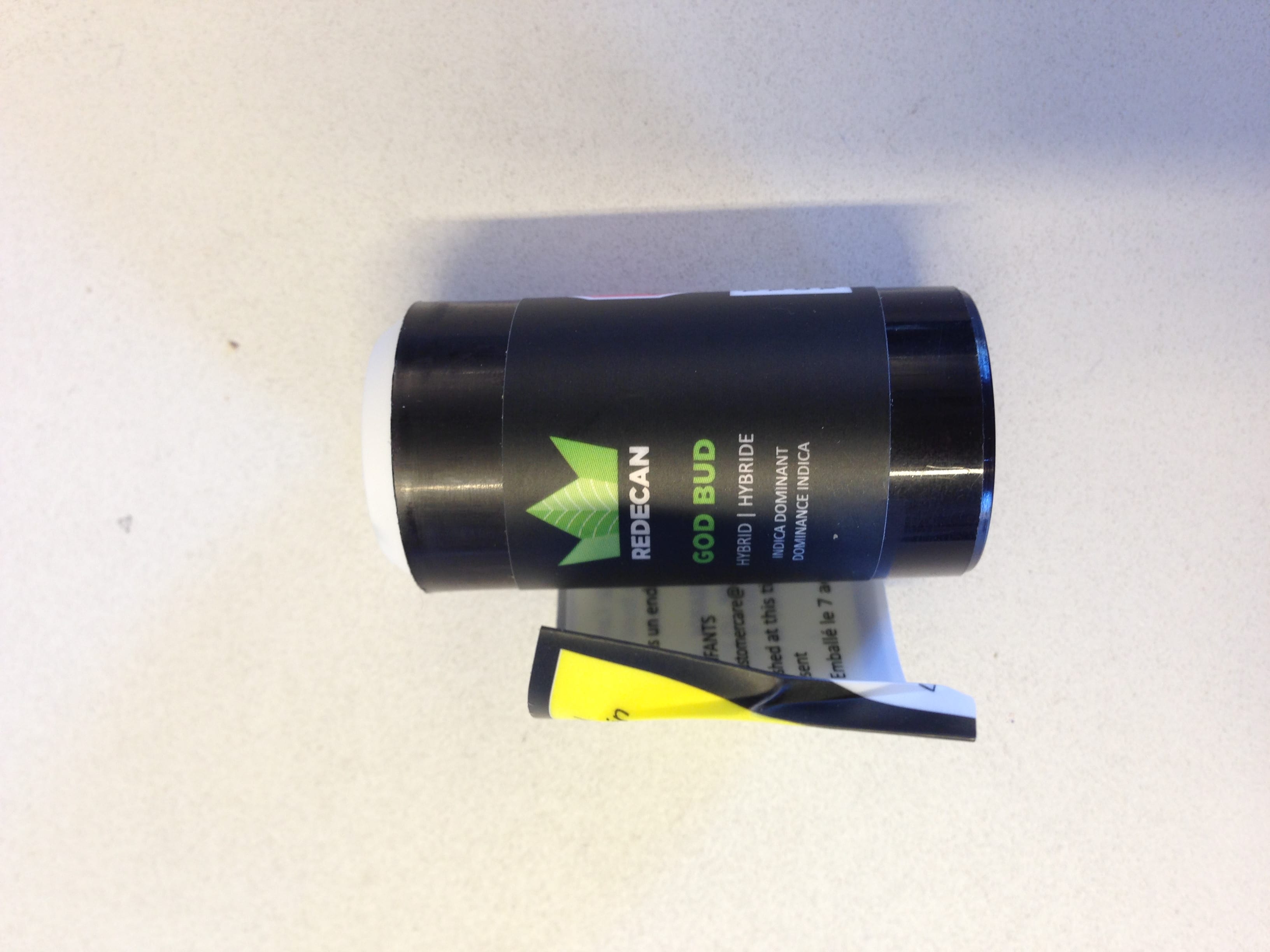 And here’s God Bud. Far be it from me to accuse the Ontario government of shortchanging me on weed, but this package seemed a little light. The biggest bud was about the size of a dime. This strain has a pleasant aroma, not unlike a hoppy IPA: 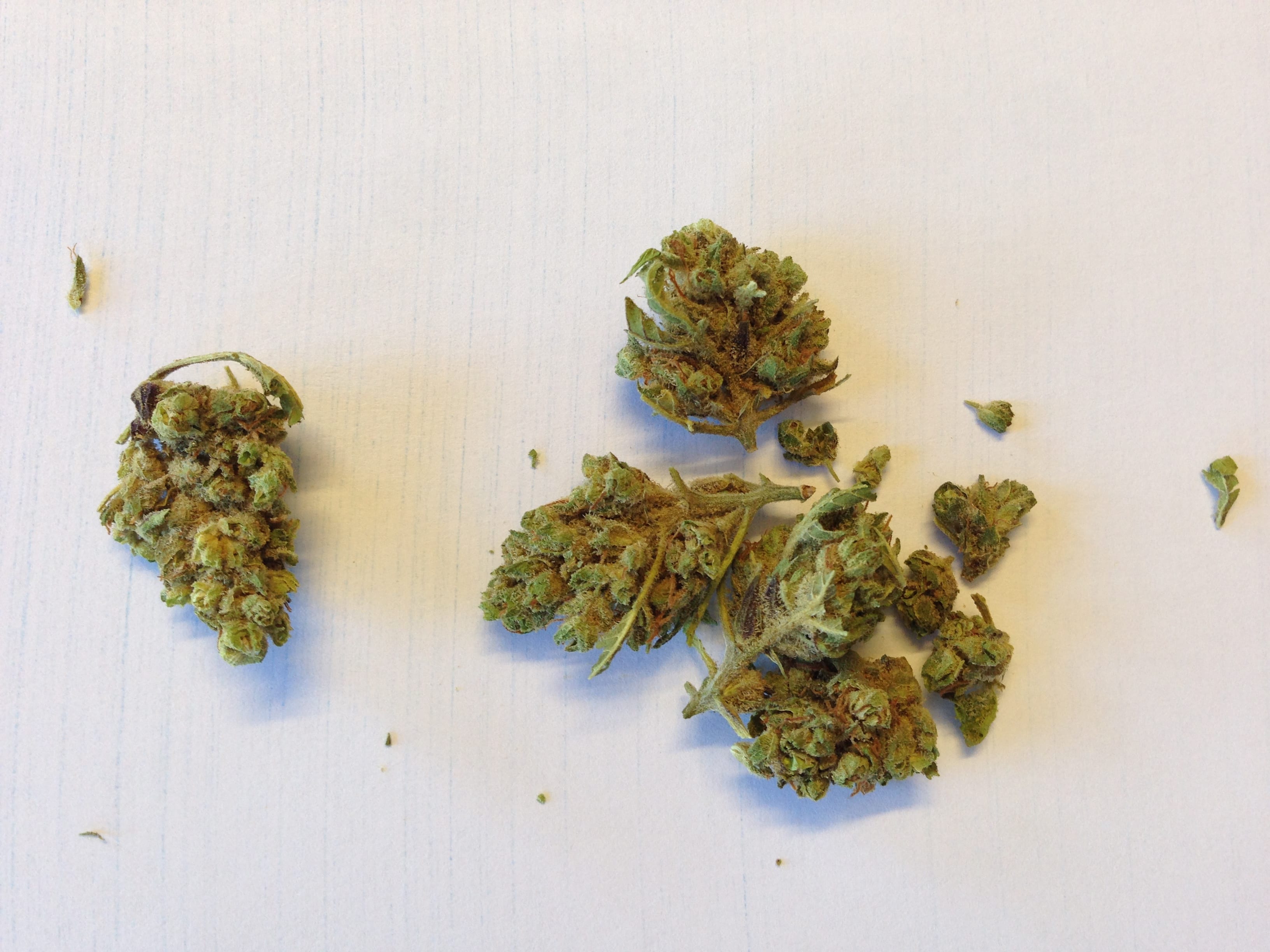 The MK Ultra came in what looked like a jumbo-sized lip balm container: 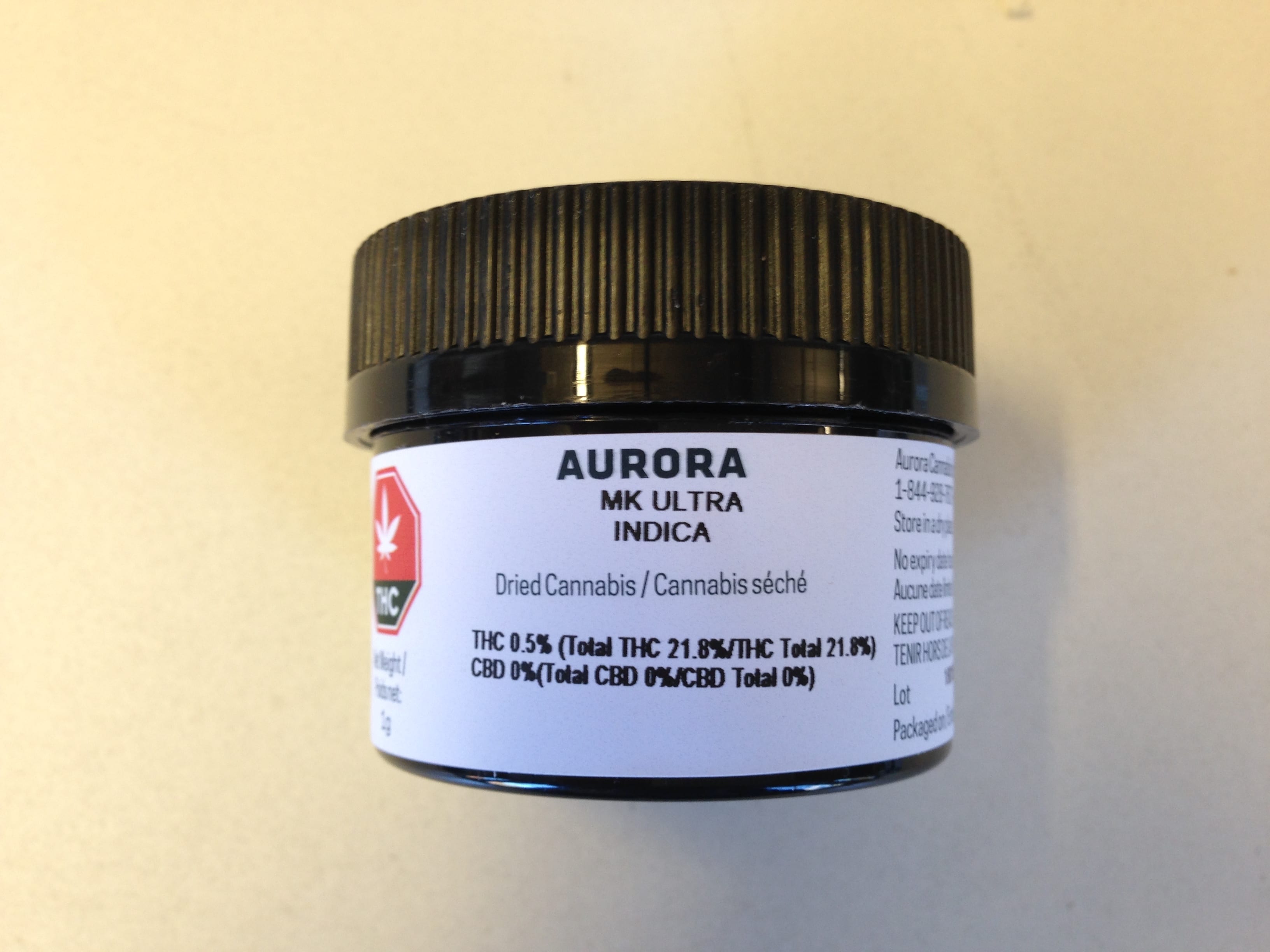 And here’s the actual plant material: 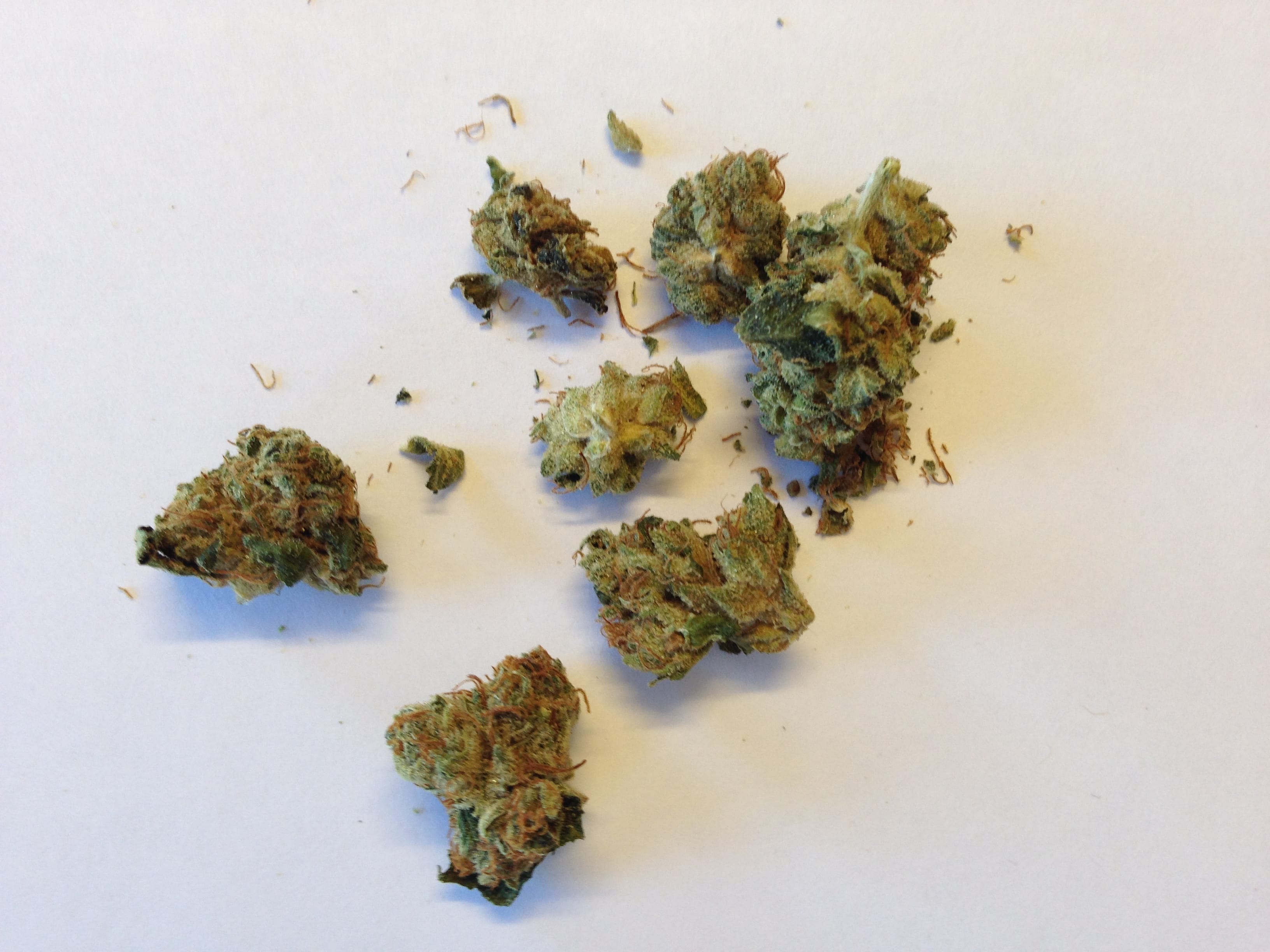 In all, I would have to say that ordering from the OCS was a perfectly fine experience, though it would have been way better without the long shipping delay. The only bizarre part is the prevalence of warning labels and the medicinal-looking product packaging. Weed is legal, but the people selling it insist on treating it like hazardous waste.

It’s a throwback to the early days of the LCBO, when all the bottles were stashed behind the counter. The LCBO took decades to liberalize. Hopefully that won’t be the case with the OCS.