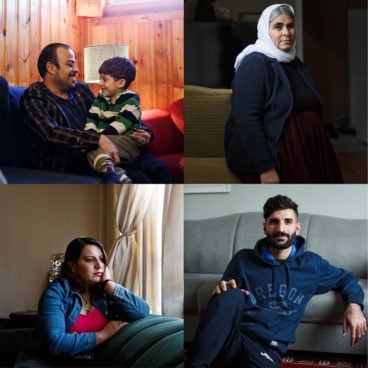 When the Islamic State invaded, the Yazidi people fled. In Canada, some have found a place to start piecing together their shattered lives

As told to Susan McClelland | Photography by Vanessa Heins | March 4, 2019

The Yazidi people have occupied the Nineveh Plains in northwestern Iraq for thousands of years. Yazidism, their ancient culture and religion, shares elements with Christianity, Zoroastrianism and Sufism, but it is distinct, too. They revere the archangel Melek Taus (which translates to the Peacock Angel), they speak Kurmanji, and some Yazidis follow a calendar that begins in approximately 4750 BC. In a predominantly Muslim region, these differences have made Yazidis the targets of unending persecution. In early August of 2014, ISIS militants invaded their territory, killing and abducting thousands. Those who escaped searched for safety wherever they could find it. Today, most remain in refugee camps in nearby Kurdistan or are spread across Europe. Some 1,200 Yazidis have come to Canada as refugees, and of those, approximately 50 families have settled in Richmond Hill. Here, in their own words, are their stories of trauma, survival and hope. 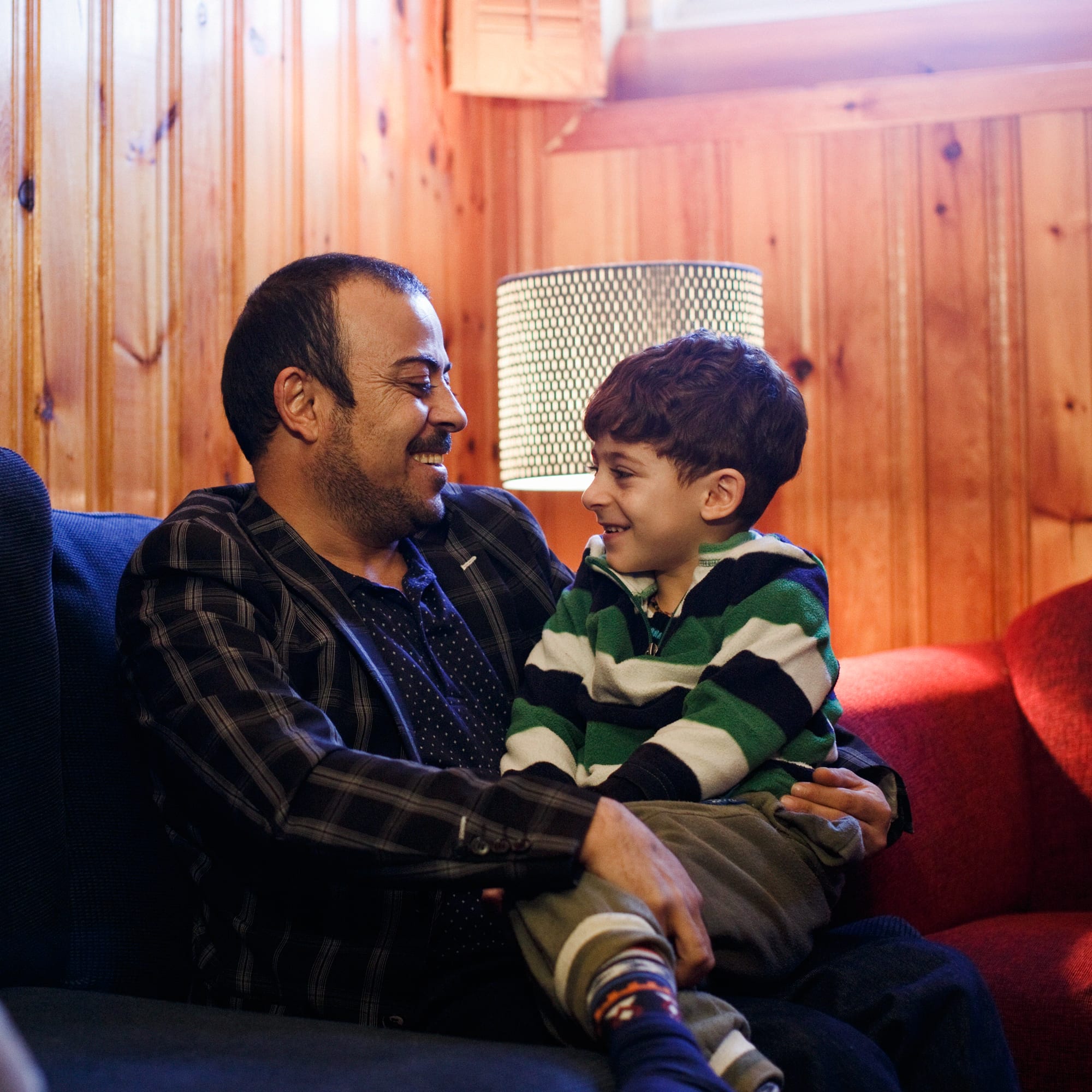 A 36-year-old builder and bricklayer from Tel Banat, Iraq, who came to Canada January 4, 2018

When ISIS arrived, my wife, Fatuma, and our three-year-old son, Dakhwaz, were visiting family in her home village. I fled into the mountains, where I lived for two months alongside thousands of other Yazidis. The nights were cold, but the mental anguish was worse. Fatuma’s cell phone had been disconnected, and I didn’t know if they were safe. I had heard the horror stories of mass killings and girls taken as brides or trafficked as sex slaves, and I feared the worst.

I made it to a refugee camp in Kurdistan and asked everyone I saw if they had seen my family. In August 2015, a year after the attack, a Yazidi man in Syria sent me a video of my wife and son. An Arab man claimed to have bought them from ISIS, and he wanted $1,500 (U.S.) for their safe return. I knew that such sales helped ISIS fund their war, but I felt trapped. I begged for donations. I barely slept or ate. People in the camp gave what they could—$20, $50—and after 15 days, I had raised enough.

As instructed, I went to the Turkish-Iraqi border and paid. When at last I saw them, my son was so thin, and he was shaking. He had been beaten, and his face was cut. He wouldn’t look at me, not at first. My wife looked like a shell of her former self. I pulled them close to me, and we cried. It was so tragic, but at least we were together, when so many Yazidi families were not and never would be.

At the end of 2017, my wife gave birth to our daughter, Delnas. The decision to come to Canada was a difficult one. My wife’s brother was still in captivity in Iraq. But we wanted to bring our children somewhere safe, so we left. We now live in a basement apartment in Richmond Hill, and my son is in Grade 1 and speaks better English than I do. He loves cartoons and soccer.

Last fall, Fatuma received a video of her brother from ISIS. They said that if we raised several thousand dollars, we could be reunited. We started to raise the money, but ISIS soon stopped responding, and we feared he had been killed. Recently, some Yazidi women who escaped said they had seen him, and that he is alive. We were overjoyed. We now pray every day that he will make it out soon. 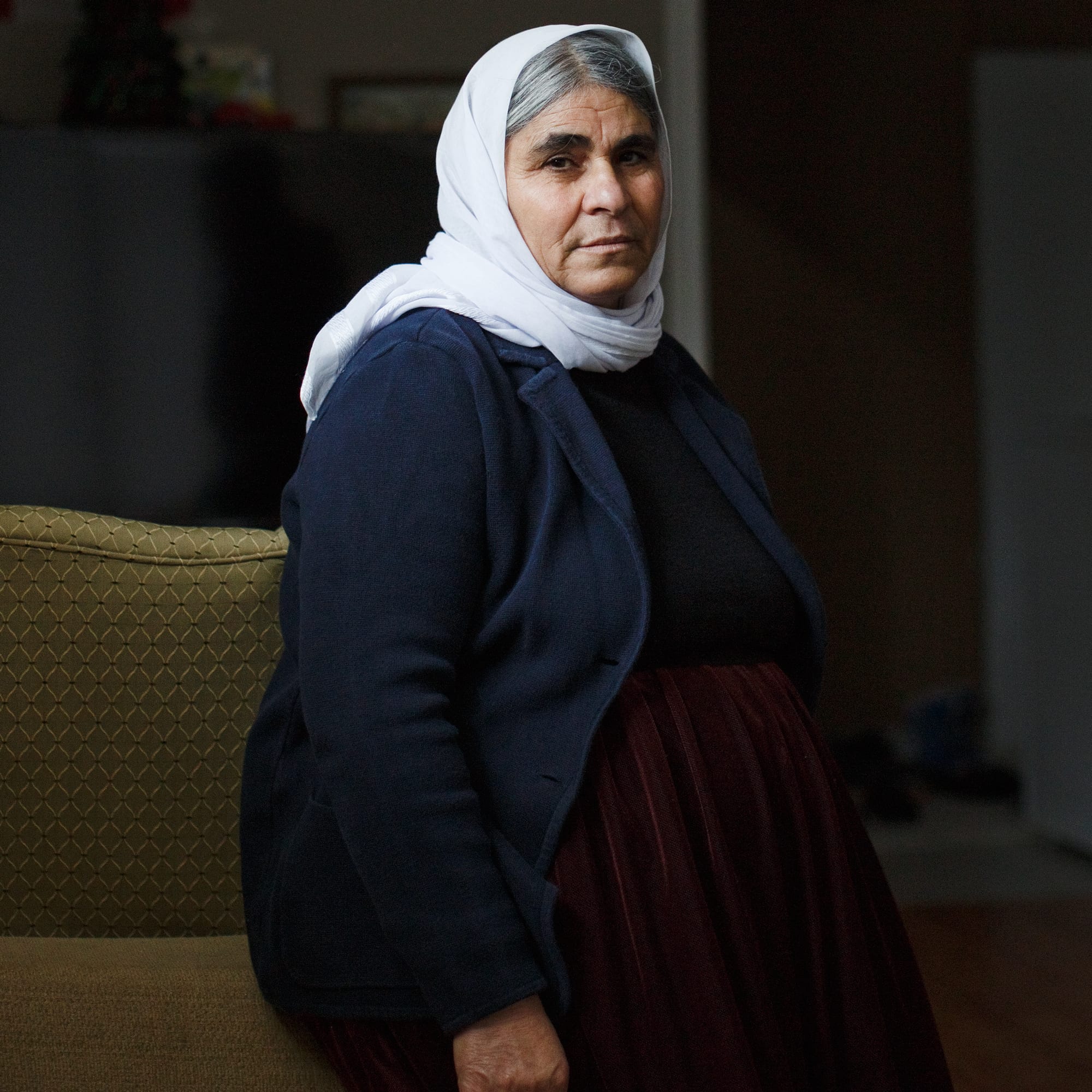 We had heard that the town of Solakh was safe, so with my family—husband, sons, daughters-in-law and grandchildren—I headed there from the mountains. Unfortunately, on the way, we ran into ISIS fighters, many of them in black and carrying machetes and guns. They blindfolded my son, who was 22 at the time, and my husband, who told me not to be scared. Then ISIS took them away.

ISIS herded the women—my five daughters, grandchildren and me—into a trailer. They drove us to Mosul, where they let us out and told us we had to convert to Islam. If we refused, they would kill us, so I agreed to convert. But when we were ordered to perform Muslim prayers, I pretended. Instead, I prayed to Melek Taus, the Peacock Angel of the Yazidi people, and to God to protect us. I also prayed to Khatuna Fakhra, a revered religious figure who represents female energy and is the protector of women and children. ISIS wanted to kill me, but the children cried out when they put a gun to my head, and I was spared.

Life in captivity was hard. We ate rotten potatoes, mouldy bread and scraps of chicken. At night, ISIS soldiers would take away young girls. They took the boys away, too, to train them to become ISIS fighters. My eldest daughter, Nadia, and I hid the children under clothes and bedding and put tape over the babies’ mouths so that ISIS couldn’t hear them crying. I wiped charcoal on the faces of Nadia and the other women so they would look insane and the men wouldn’t want them.

I believe our guards began to think that, because we were women, or because we were tending to so many kids, we wouldn’t run. One evening, about three months after our kidnapping, they went to pray and forgot to leave a guard to watch over us. We knew it was our moment. There were 51 of us who ran. Eventually, we came to a river. I stood with two of the tallest women in water up to our armpits and helped pull the others across.

Today, my grandchildren are safe in Toronto. They are learning English in school, and they have started to smile again and play games—mostly hide-and-seek and lots of soccer. As for me, I wait for news of my son and husband, and I hope. 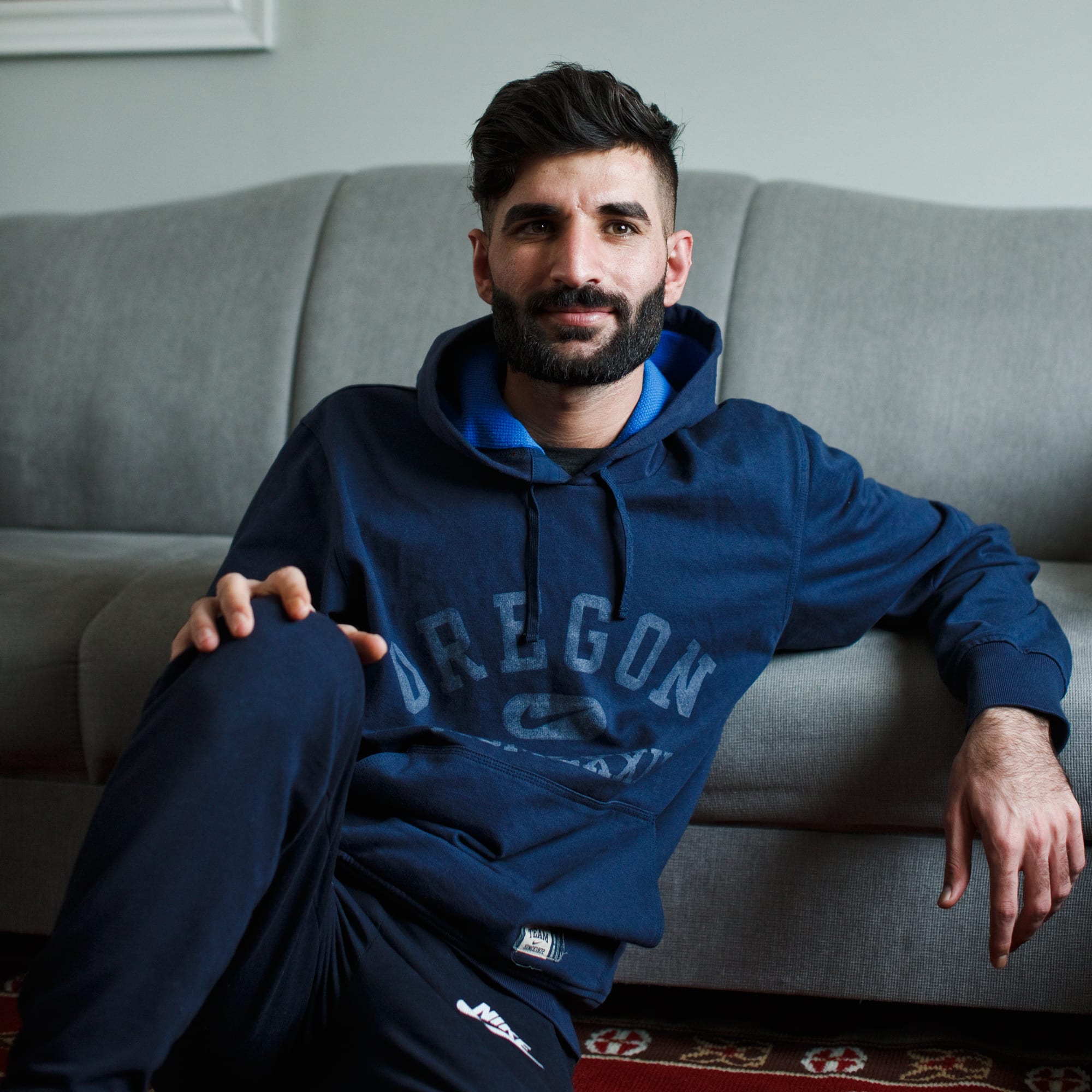 A 22-year-old student and aspiring filmmaker from Sinjar, Iraq, who came to Canada on January 24, 2018

Life was beautiful in Sinjar. My large extended family lived close to one another, in 25 houses clustered together. We would go to each other’s homes all the time to eat meals, dance, play soccer and talk.

Initially, when ISIS arrived, they said they wouldn’t hurt us. But then they separated men from women and took my sister, Khalida, and my older brother, Khalid. My parents and I left our home before sunrise and walked into the mountains. Five hours later, we arrived in Syria and were taken to a refugee camp in Kurdistan, where we met my younger brother, Ali, and my grandfather.

Conditions were poor. Often there wasn’t enough food, and our bellies swelled from malnutrition. In winter, our toes froze, and in summer, our skin blistered. We tried to distract ourselves from thinking about Khalid and Khalida, but there was often nothing to do other than sit and worry.

In the spring of 2015, we received a phone call from Khalid. He was in an Iraqi village with other Yazidi men, and one of them had somehow accessed a phone. ISIS was forcing Khalid to work on a farm, harvesting vegetables and tending to animals, while armed soldiers watched. He said he was scared. He didn’t know what would happen to him. We haven’t heard from him since.

Later, someone sent us a link to a Facebook page set up by ISIS that showed Khalida holding her three-year-old son. Thankfully, officials from Kurdistan helped us pay the $30,000 (U.S.) ransom. We were soon reunited at the camp.

We now live in a bungalow in Richmond Hill. We feel safe for the first time in nearly five years, yet it is hard to be happy. We worry about Khalid.

My little brother, Ali, is now 18. He goes to high school and speaks the best English in the family. He posts his own music online to inspire Yazidis to stay strong. He has 68,000 Instagram followers and has become famous among our people.

My sister and I are now taking ESL courses, and I just passed the first level. I’ve also begun making films—producing and acting in funny skits to entertain Yazidis. There is so much sadness in the world already; I want to make my people smile, if only for a bit. 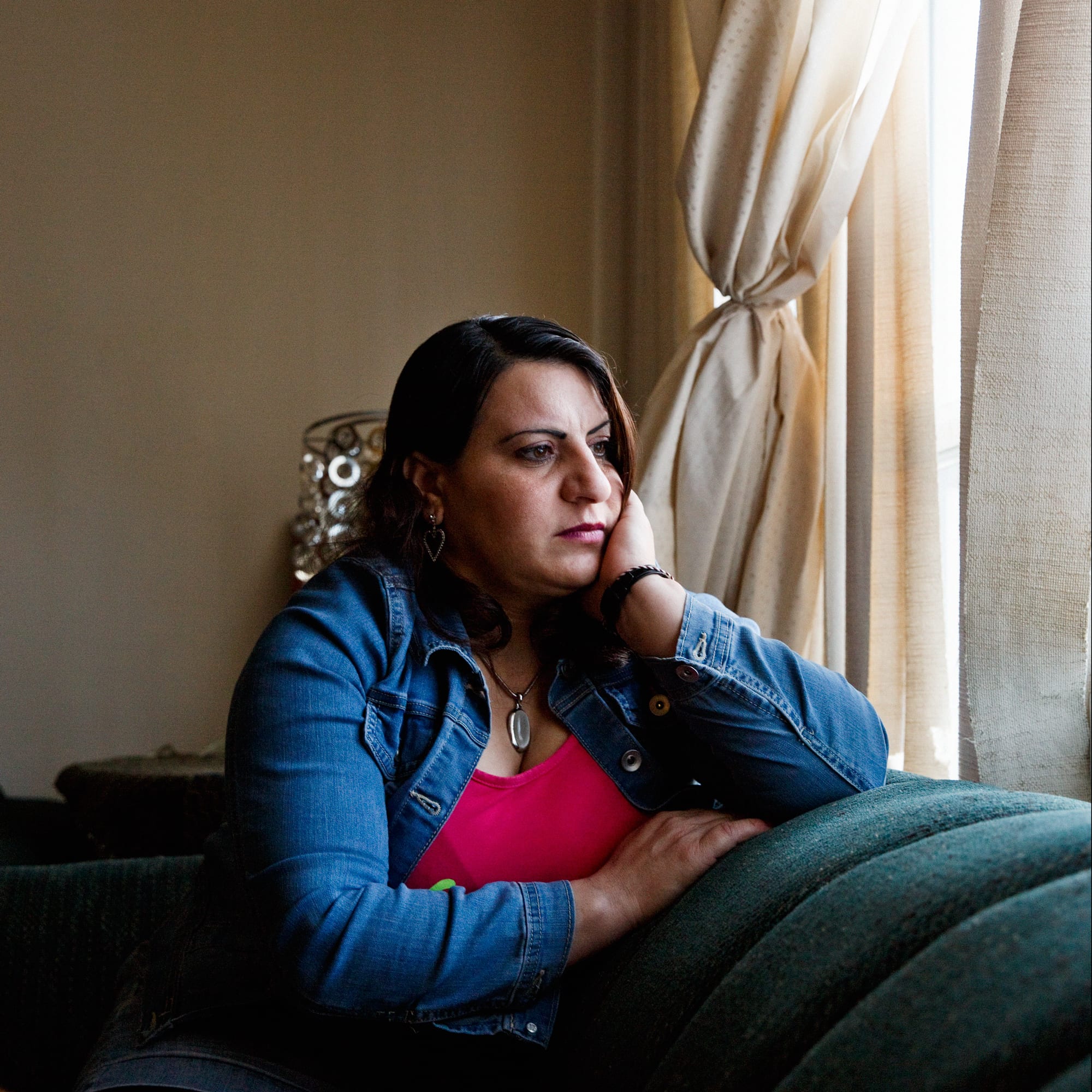 A student from Sinjar, Iraq, in her early 30s

When the shooting started and the bombs began to fall, I ran with the other villagers from Sinjar into the mountains. There were so many of us, some running, others piled into cars. When the cars couldn’t move anymore because of the traffic, people abandoned them and ran. In the mountains, some of us didn’t have shoes, and their feet swelled and bled. Some didn’t have coats, and they shivered at night. There wasn’t enough food, and many people died. Bodies were everywhere. We didn’t know if ISIS would come into the mountains, so no one felt safe. I couldn’t find my siblings, brothers-in-law, nephews and nieces, or parents, and I was so worried about them.

After seven days, I heard the helicopters of the Kurdish paramilitary. They had come to rescue us, but there weren’t enough helicopters, so I walked with some others. Finally, a truck used for livestock came and picked us up and brought us to the border of Syria and into Kurdistan. I ended up at a refugee camp—a cramped, muddy collection of tents. But at least I was safe.

The Yazidi have been persecuted for generations. Under Saddam Hussein, Yazidi culture wasn’t recognized. As a result, many Yazidi parents didn’t register their children’s births, because the documentation would say they were Arab and Muslim. My parents were like that. Even now, I don’t know my age, though I would guess that I am in my early 30s.

In 2017, I came to Toronto with one of my sisters. Another sister settled in Calgary, and three others remain in Iraq. Many of our family members have not been found.

Twice now, I have given my DNA so that it can be compared with the bodies being exhumed from mass graves. Every time my phone rings, I fear it’s someone calling to tell me that they’ve located the body of someone I love.

On the wall of our home, my sister and I have a collection of photos of all the people we know who were killed by ISIS. Beneath that is a sketch of two ISIS figures wearing face-scarves, one carrying a machete, and a date—August 4, 2014. It’s to remind us of the day that light turned to darkness.

Susan McClelland is co-author of A Cave in the Clouds, the story of Badeeah Hassan Ahmed and her escape from ISIS.