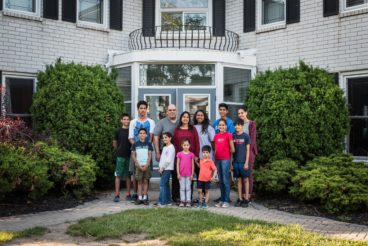 The Rebellos have 12 kids. It takes superhuman organization, infinite patience and epic weekly grocery runs to make their lives work. Portrait of a mammoth modern family

The Rebellos have 12 kids. It takes superhuman organization, infinite patience and epic weekly grocery runs to make their lives work. Portrait of a mammoth modern family

Liz and Steve Rebello used to be the sort of couple who thought one kid might be enough. After dating through high school, they married in 1997 and had their first daughter, Christina, nine months later. Liz wasn’t sure she wanted to do it all over again. That bit of Rebello lore is now a running family joke, because Liz did do it again. Eleven more times. She’s been pregnant for the better part of the past 20 years. “I would forget I was expecting,” she says. “It just became such a normal part of who I was. People would say congratulations and I’d be like, ‘Why? Oh, right!’ ” Today, the couple have 12 children—a vibrant, warm and amazingly functional brood crammed into a raucous five-bedroom home in Mississauga.

A full house has always felt familiar to Liz and Steve: she’s one of five kids; he’s one of 11. As their family began to mushroom, they outgrew their homes like a tween outgrowing his shoes: they left Steve’s parents’ basement for a two-bedroom house, then another, followed by a four-bedroom house and, eventually, their current home. Liz gave up a part-time job as a supply teacher to stay with the kids, while Steve got work as a steel manufacturing executive and pursued an MBA at Schulich. “People laughed because I’d go into class one year with a couple of young kids,” he says. “The next, it was four. Then six.”

In 2010, after the birth of Monica, their 10th, Liz had a miscarriage. Her body was exhausted, and she worried that trying again might prevent her from taking care of the kids she already had. The couple took a year off from having babies. When her health improved, she got right back to it, delivering two more kids in as many years. By then, the eldest two were nearly done high school. “At mass, Rachel would hold Matthew, and people would think she was his mom,” Liz says, laughing.

To an outsider, running the Rebello household seems as complicated as quantum computing, but they have systems for everything. On the kitchen calendar, each day is an impossible scramble of exams, soccer games, birthdays and appointments. Next to the calendar, a rotating weekly job list divides chores: every crumby counter-top, smudgy mirror and brown-bag lunch has a kid assigned to it. On any given day, there are up to three different breakfasts and just as many lunches, though dinners are always a full-family affair. Every Monday, Liz drags a different kid along for errands or a walk to make sure she gets one-on-one time with each of them; ditto for Steve’s Saturday grocery hauls. The couple make sure they have a date night once a week—no kids allowed. “If you don’t schedule it,” says Steve, “it’s not going to happen.”

One perk of having a dozen kids packed in fast and furious is that things recycle: Rebecca’s clothes become Theresa’s; Joseph’s toys become Luke’s. There are enough skates, boots and soccer cleats in the Rebello basement to open an unofficial Foot Locker franchise. Friends and neighbours routinely drop hand-me-downs off at the house, knowing they’ll go to good use, while local bakeries sometimes deliver day-old bread and pastries to their door. Once, when the family went to Tucker’s for dinner, a couple at a nearby table paid their bill because they were so floored by how well the kids behaved.

Christina graduated from George Brown’s culinary program earlier this year and now works in the kitchen at a student residence. Rachel studies at U of T and hopes to become a teacher. Andrew, Daniel and Joseph attend St. Michael’s College School. Rebecca attends Hawthorn School for Girls with two of her sisters, Theresa and Monica. The energetic trio of Thomas, Luke and Katrina are home-schooled, and Matthew, the littlest Rebello, will soon join them.

Liz has home-schooled each of the kids for at least a year. It keeps commutes more manageable and helps with finances. The kids don’t have RESPs—instead, Liz and Steve will loan kids money for post-secondary education as they need it. “That way, when one pays us back, they pay for the next.”

Rebecca, the next Rebello in line for university, looks forward to the anonymity of post-secondary life, where teachers won’t feel obligated to tell her about how many of her siblings they’ve taught. “In Grade 7 and 8, I was embarrassed by my family,” she says. “But once I was in high school, I found a group of friends who loved my family. I realized, Everyone else loves my family. Why don’t I?”

A Day in the Life of the Rebellos

5:30 a.m. Steve is the first to wake up and quietly makes his way to the kitchen. It’s the only time of day the dining room isn’t bustling.

6:37 a.m. Monica, Rebecca and Theresa—the only kids who have school today—join Steve for breakfast. 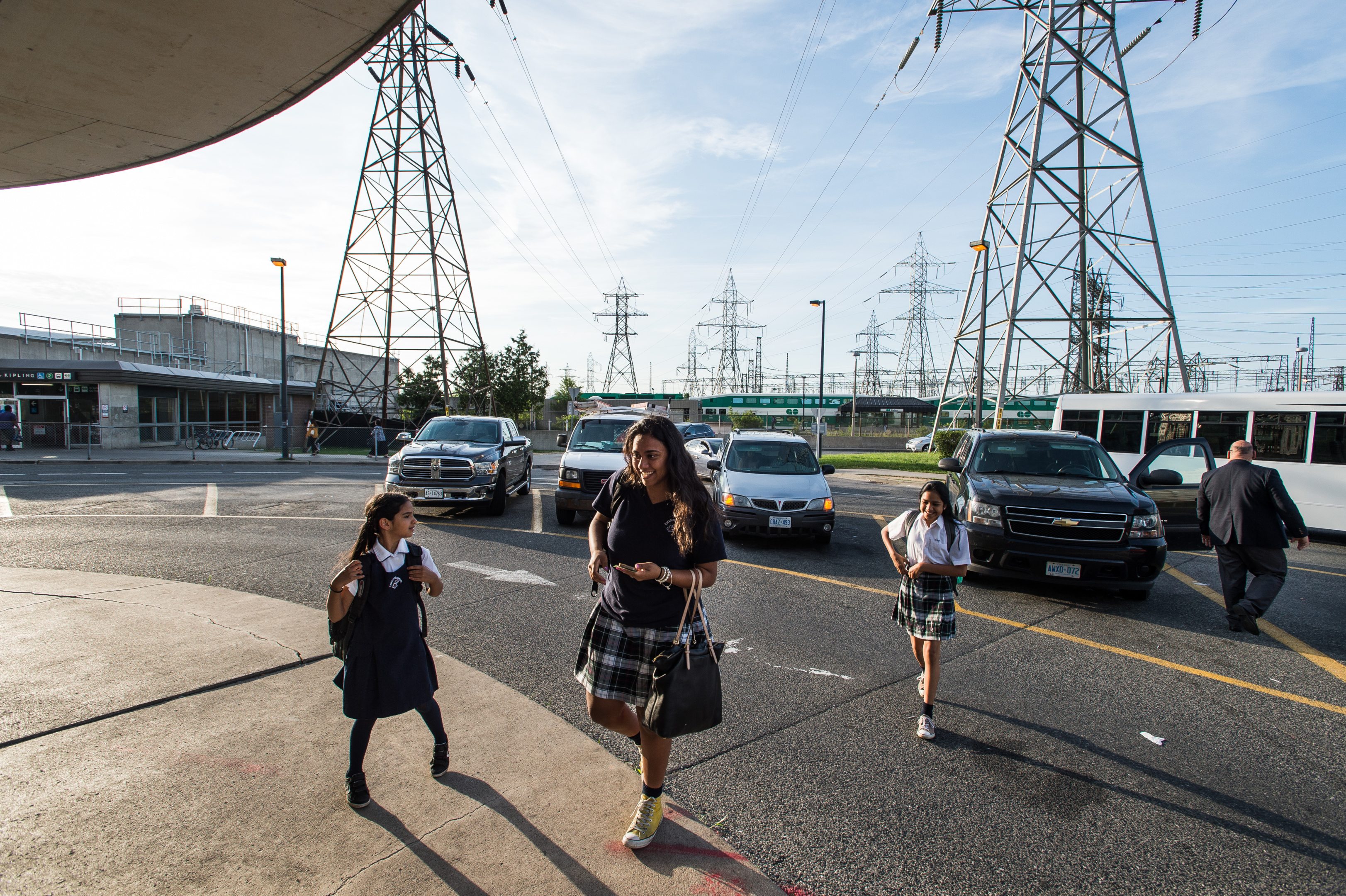 7:13 a.m. Steve drops Monica, Rebecca and Theresa off at Kipling station in the family’s Suburban. The girls now take the subway to Hawthorn, but the Rebellos used to carpool in a 15-seat van with other families. “Our van basically became a school bus,” says Liz.

8:00 a.m. The rest of the kids start to wake up. Rachel, the oldest kid still living at home, helps prep Matthew’s breakfast, while the others make their own. 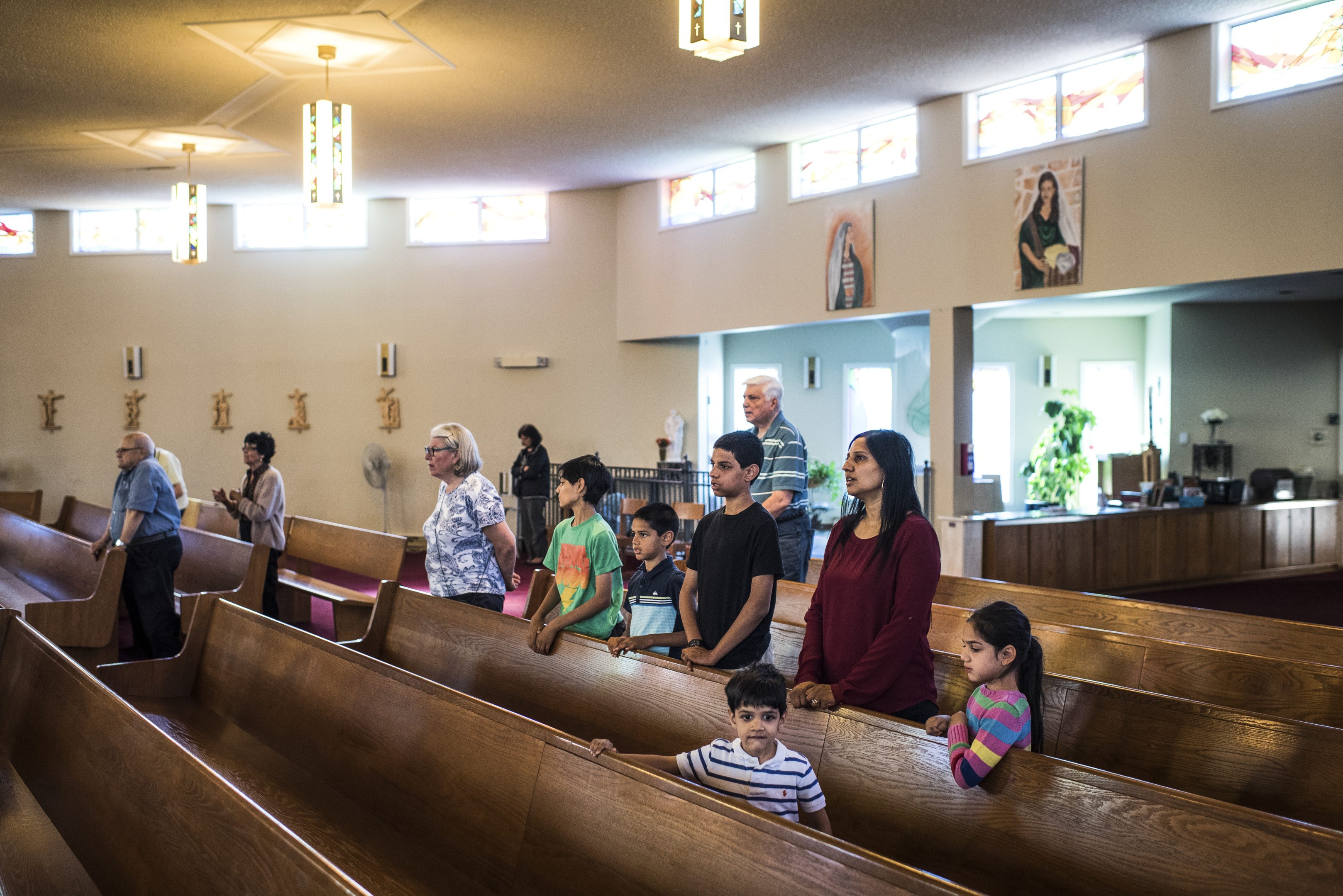 9:36 a.m. Liz attends mass with Thomas, Luke, Joseph, Matthew, Katrina and Steve’s mother, Louise, at Sts. Martha and Mary Parish. Liz brings the kids who are home-schooled and, in the summer, anyone else who’s awake; Steve attends a separate mass closer to work. “When the kids were really little, it was difficult to keep up,” says Liz. “But it starts my day off and puts me in the right mindset.” The family also goes to church together on Sundays and helps organize catechism classes. 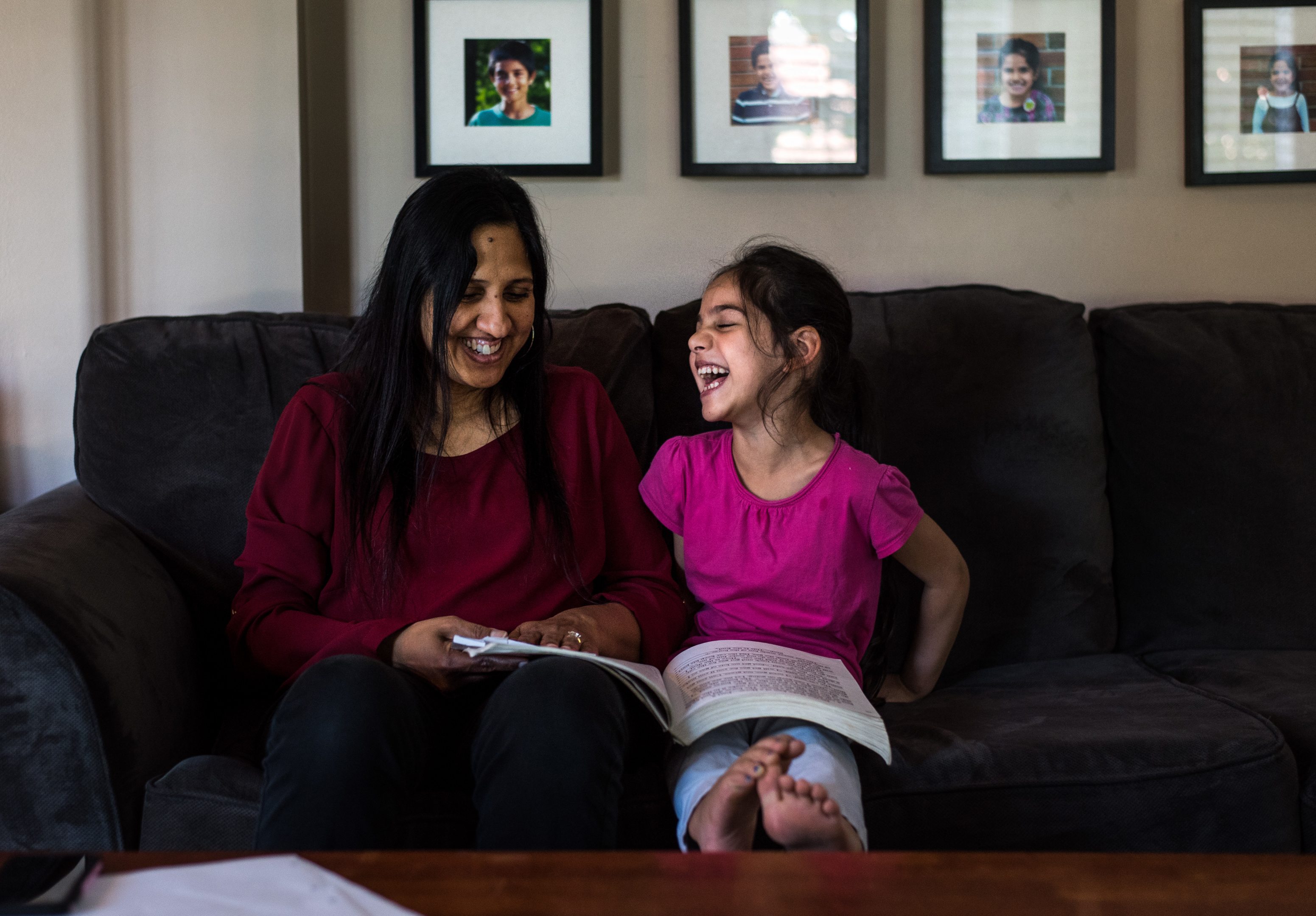 10:32 a.m. After, Liz reads with Katrina, while Luke and Katrina begin studying. Liz studied early childhood education and has home-schooled each of the kids for at least a year. 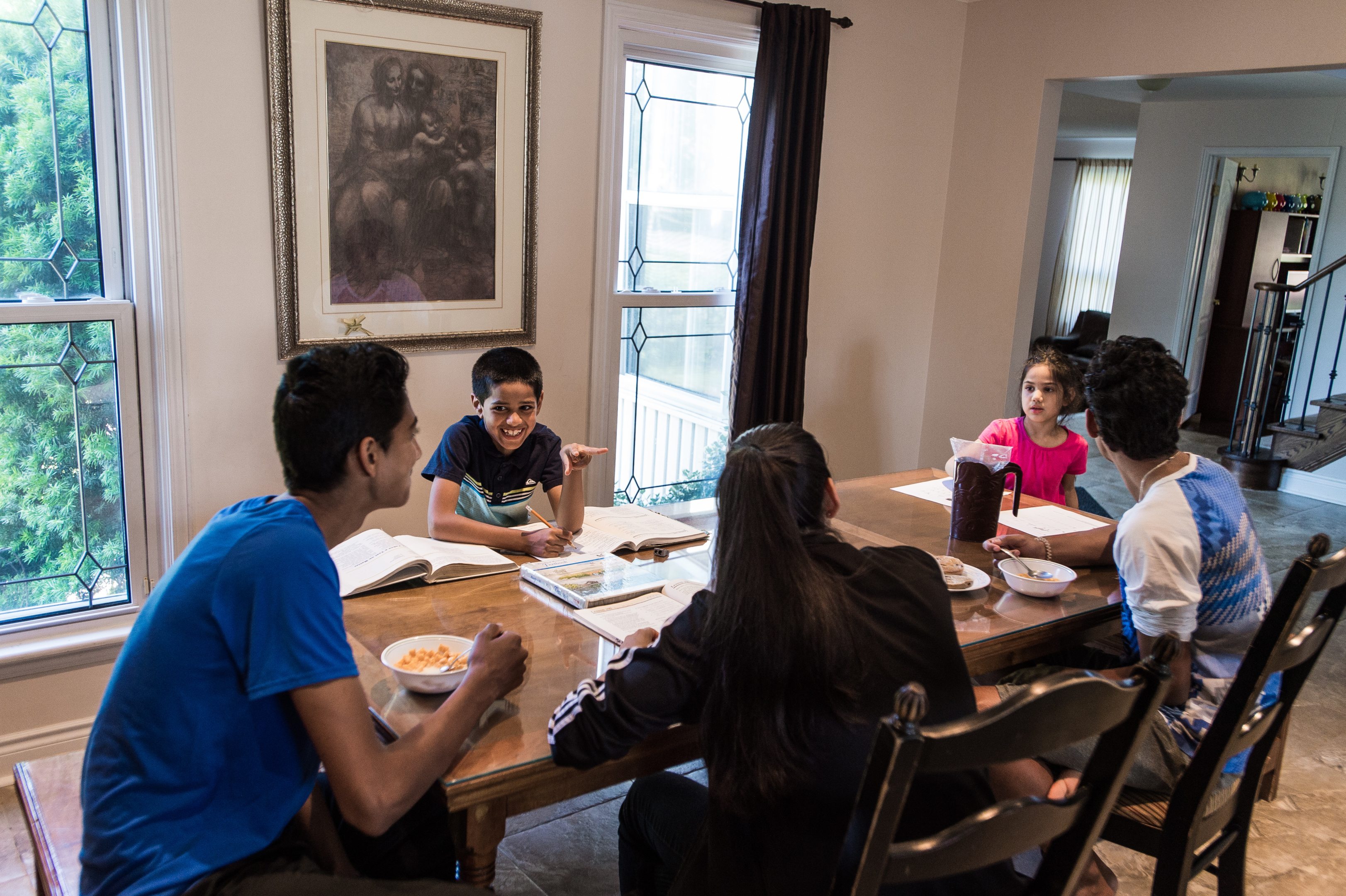 11:42 a.m. Luke and Katrina study while Daniel, Rachel and Andrew, who are all off school for the summer, eat a late breakfast.

1:04 p.m. The kids who are home eat lunch: sandwiches with buns that Andrew grabbed earlier in the afternoon. Even with massive weekend grocery hauls, the family makes frequent trips to the closest store for day-to-day items. 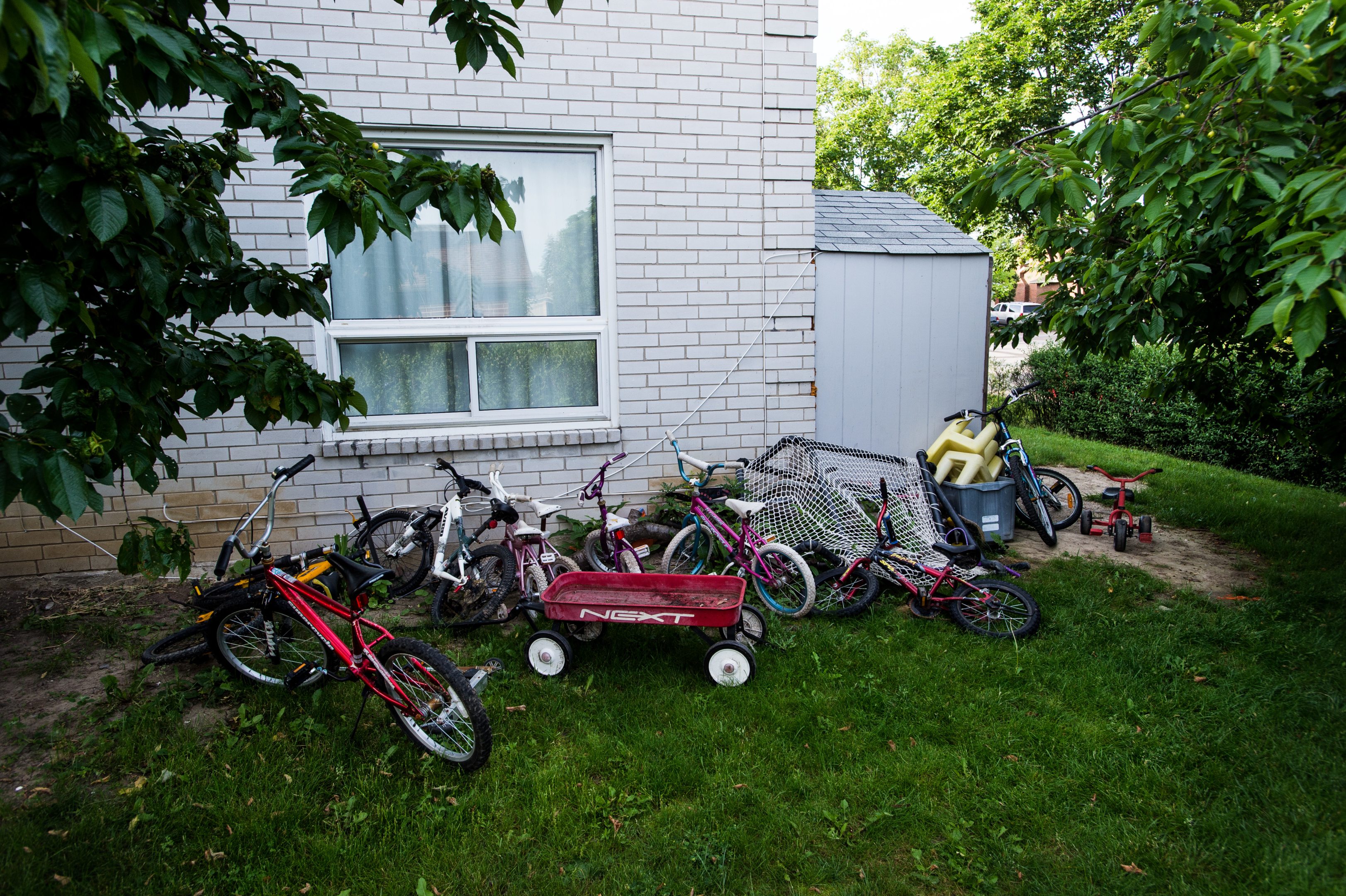 The Backyard The yard is home to the Rebellos’ umpteen bikes, which have passed down from one kid to another. Steve built side-by-side sheds on the side of the house to hold the rest of their sports equipment. 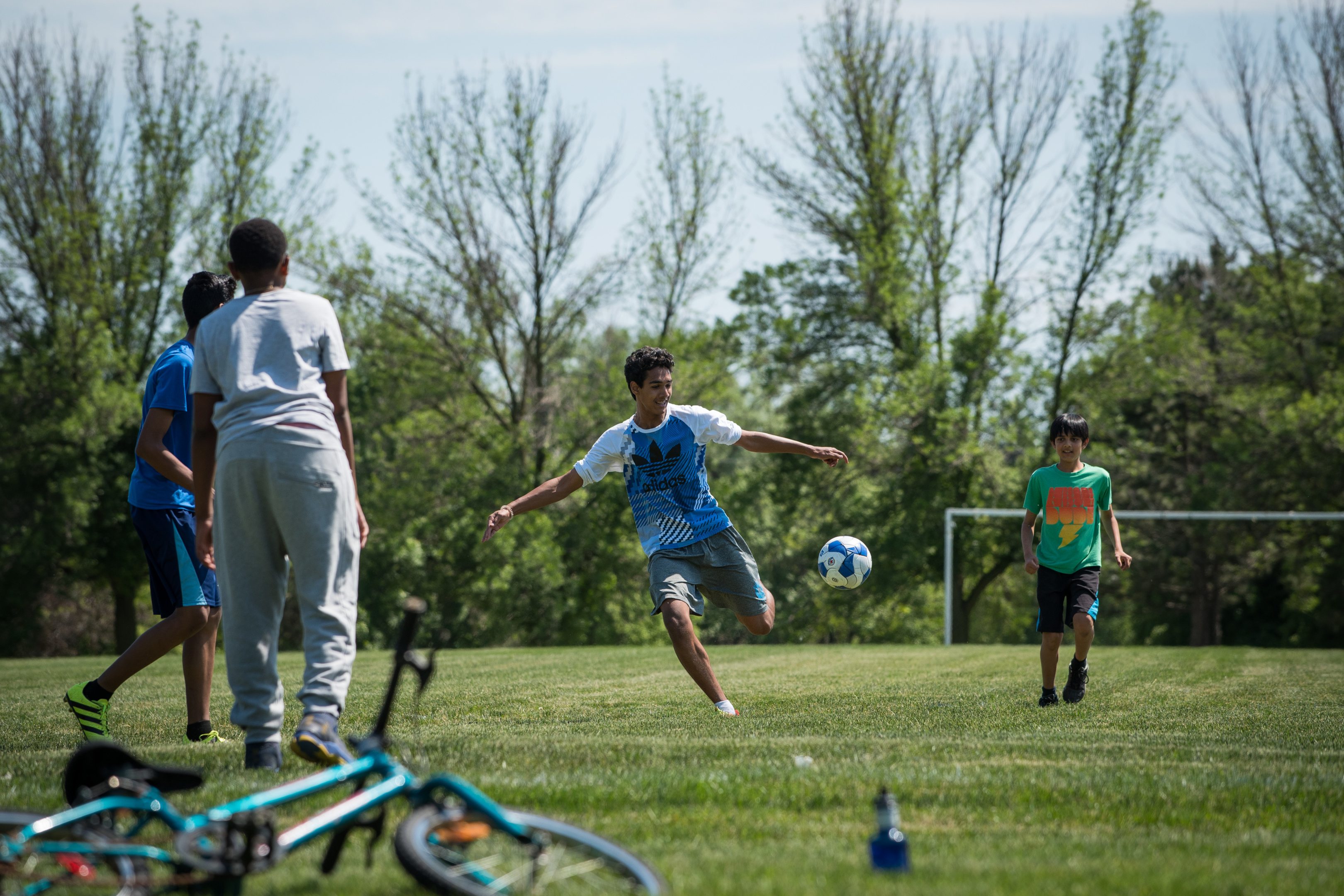 2:19 p.m. Andrew kicks around a soccer ball at a nearby park. A number of the Rebello children have played in leagues, but none pursued it seriously. “Maybe Daniel could have been the next Cristiano Ronaldo,” says Steve. “But where Daniel is really good at one thing, Theresa is really good at another. You’d have to go from event to event, drive from this tournament to that tournament. You can’t be there for 12 of them like that. How do you choose the prodigy?” 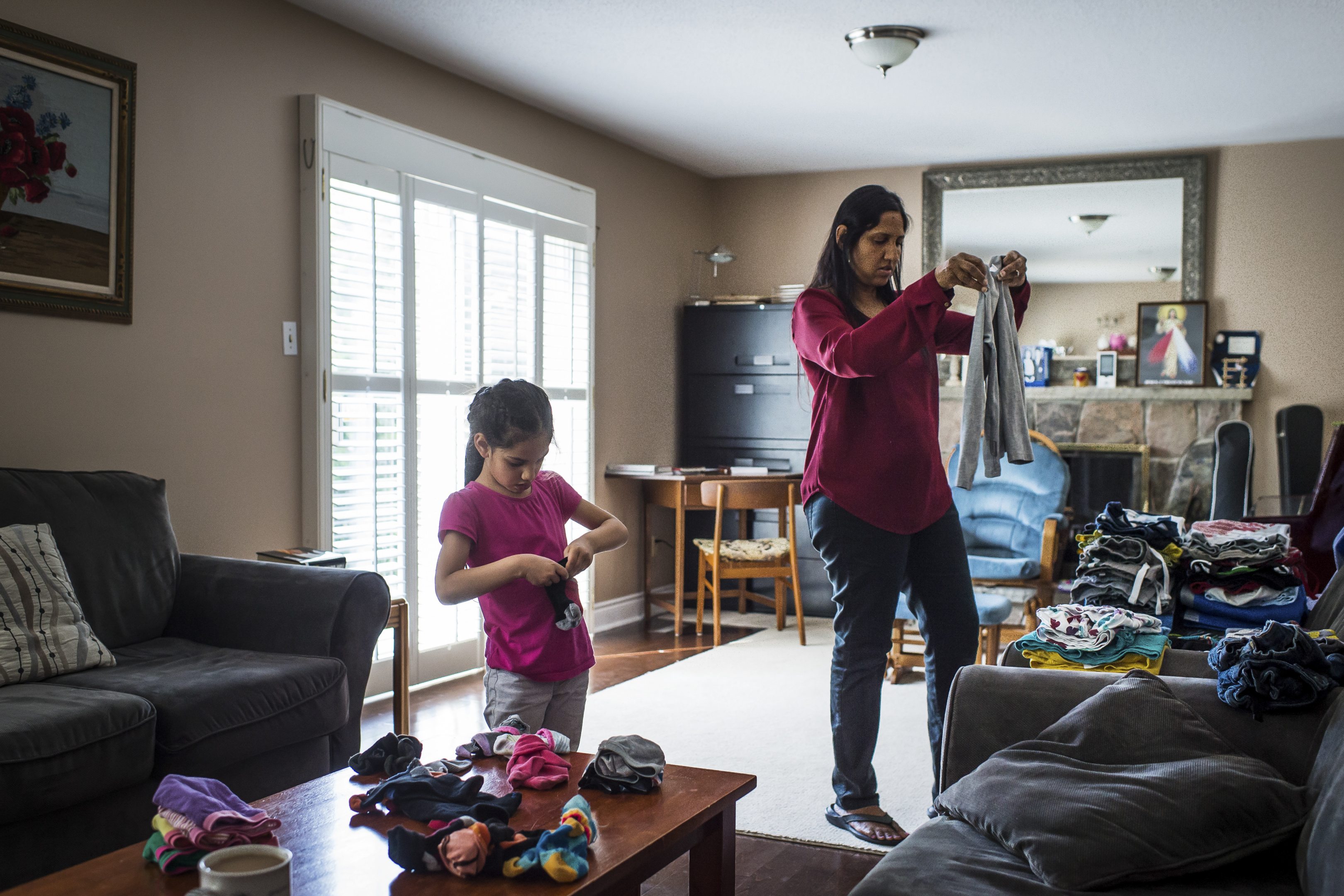 2:32 p.m. Katrina helps her mom fold laundry in the den. The family does some 200 loads of laundry a month. The older boys wash their own stuff, while Liz handles everything else. She reserves big loads—school uniforms, cleaning rags—for the weekend, but there’s always something being washed. “It never stops,” says Liz. 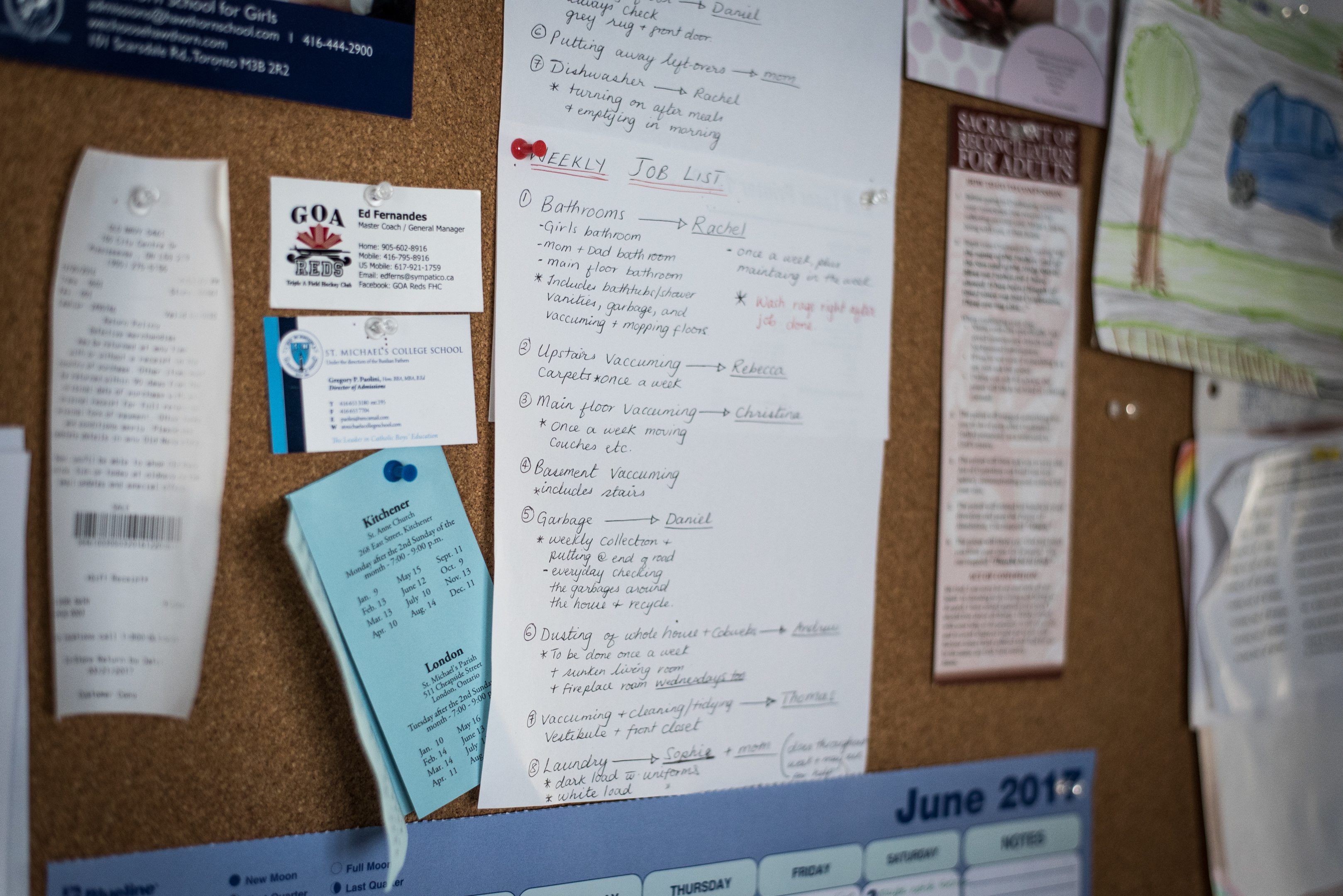 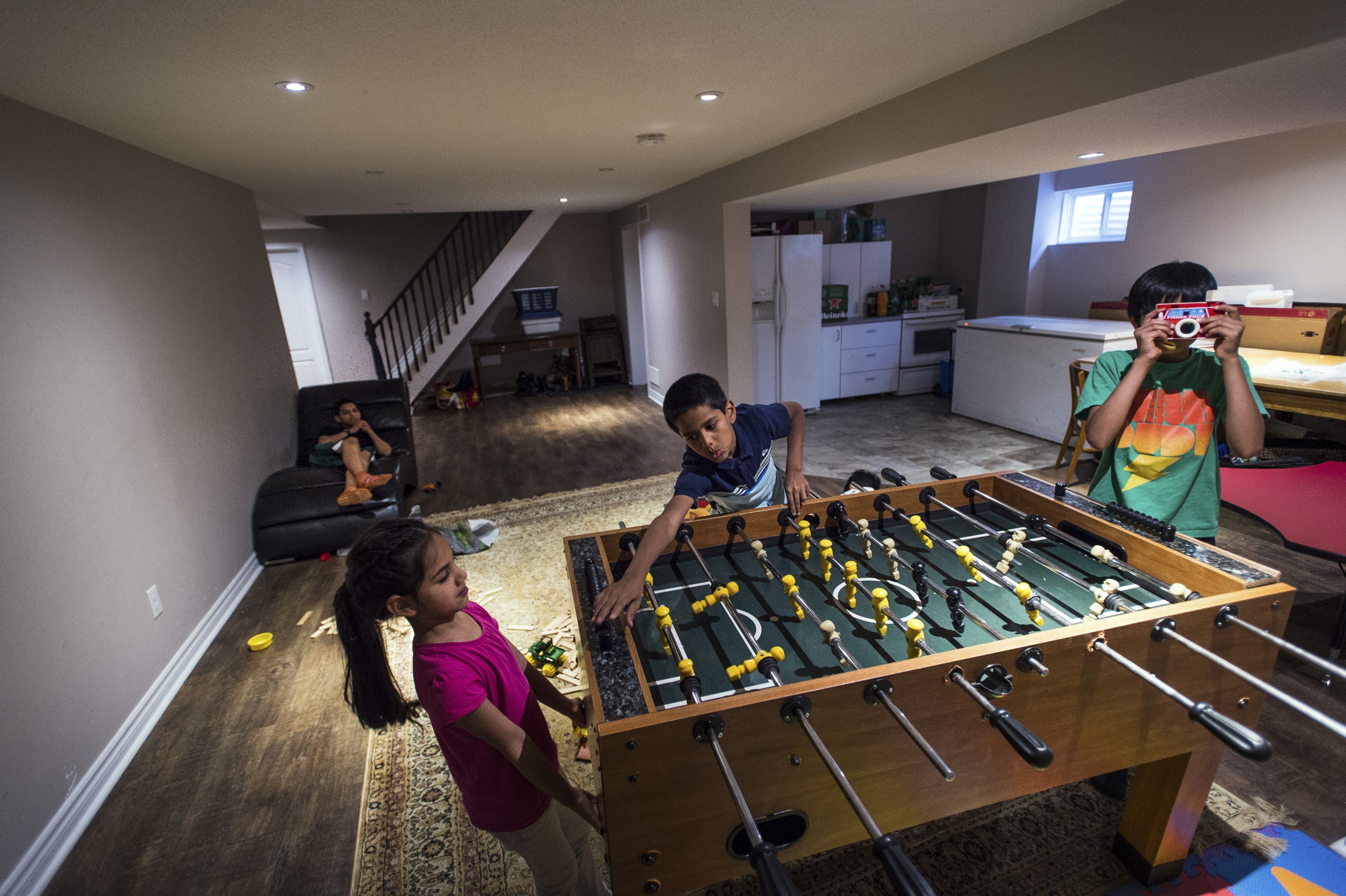 4:55 p.m. Katrina, Luke and Thomas play foosball in the basement, which is filled with toys, board games, books and other supplies. “Friends know we have a big family, so they’re constantly giving us stuff,” says Liz. 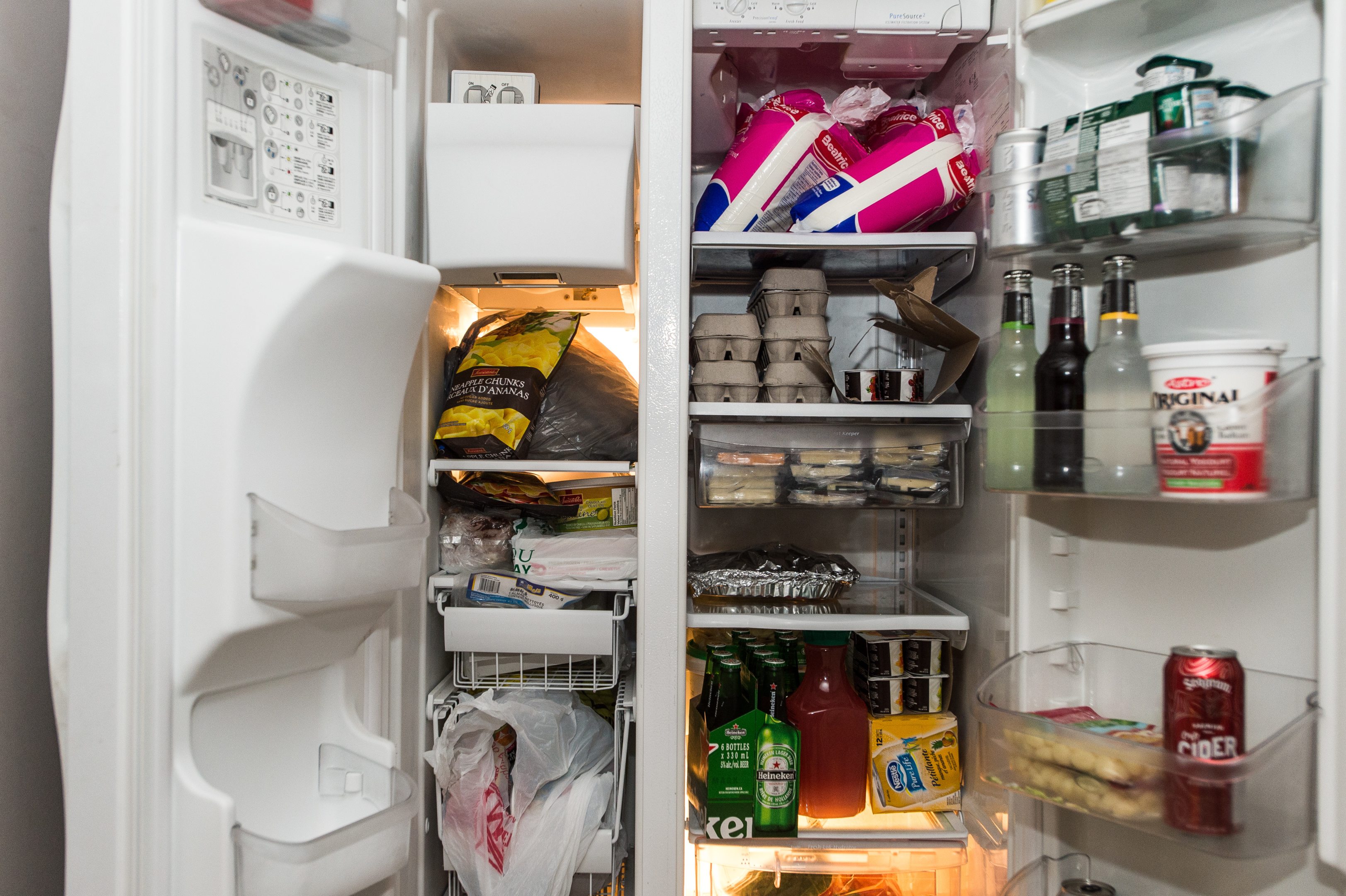 The Fridge The family’s weekly grocery bills usually run between $160 and $300, and might include 120 eggs, 24 loaves of bread and 20 litres of milk. Extra groceries go in the fridge and deep-freezer in the basement. None of the kids have food allergies. “God knew I wouldn’t be able to handle it,” says Liz. 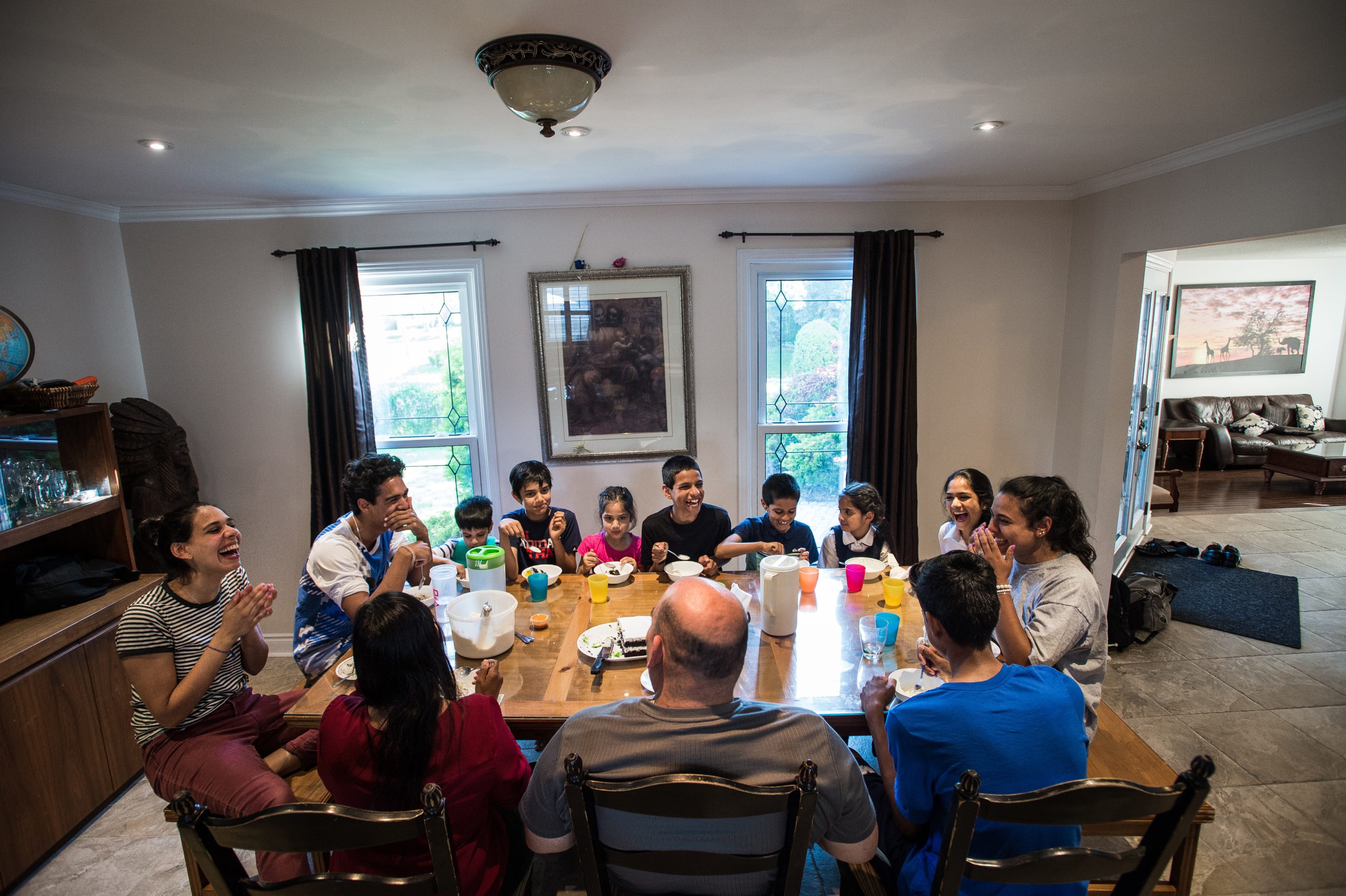 6:12 p.m. After Steve gets home from work, the family eats dinner together. They rarely eat out but occasionally order pizza on Mondays.

6:27 p.m. The kids clean up: Andrew, Joseph and Theresa all do dishes; Rebecca dries and puts plates away; Daniel vacuums. 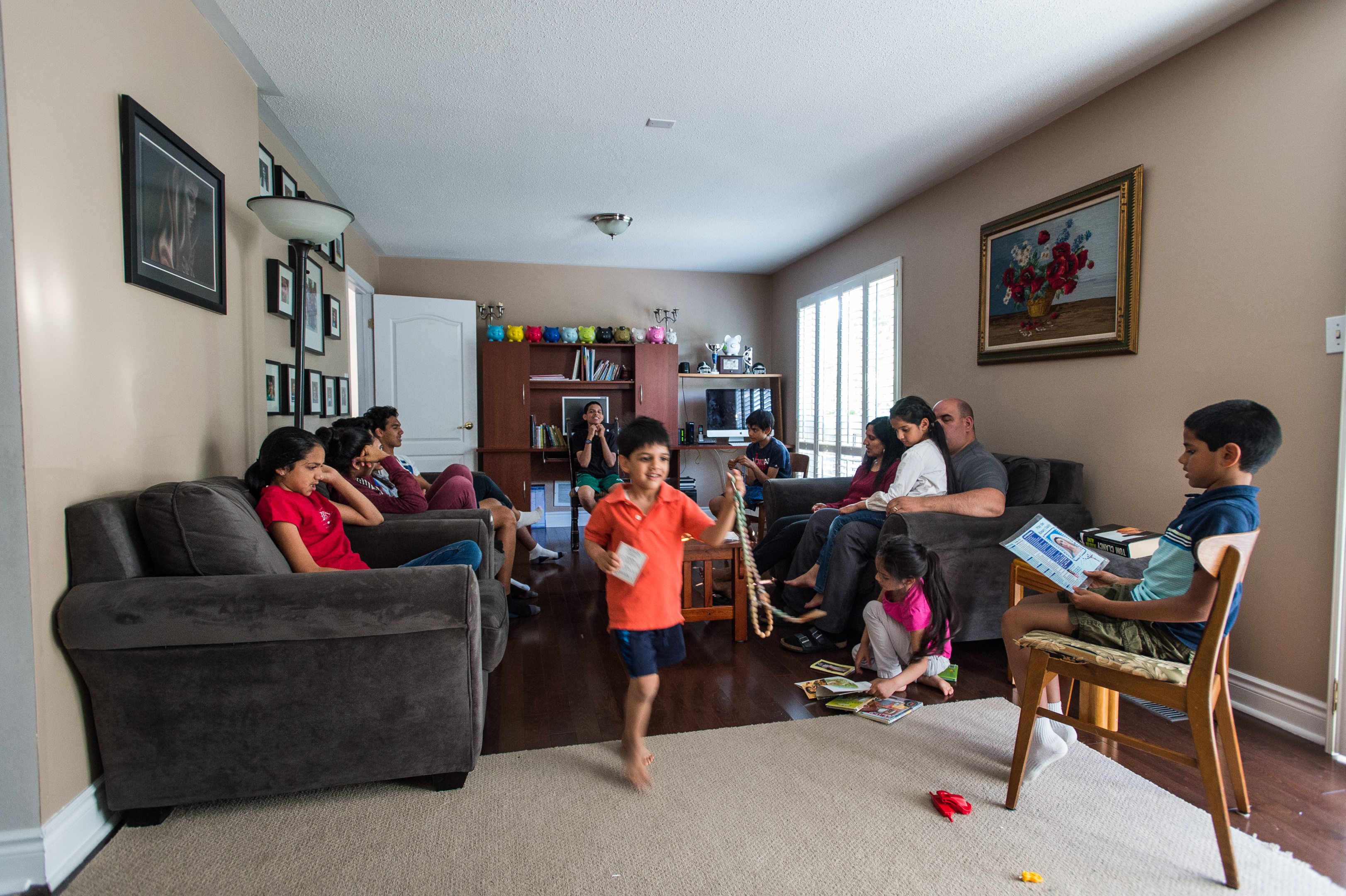 6:49 p.m. Matthew brings a rosary to his brother Luke. The family prays the rosary every night after dinner, with each child leading a different section of the prayers. 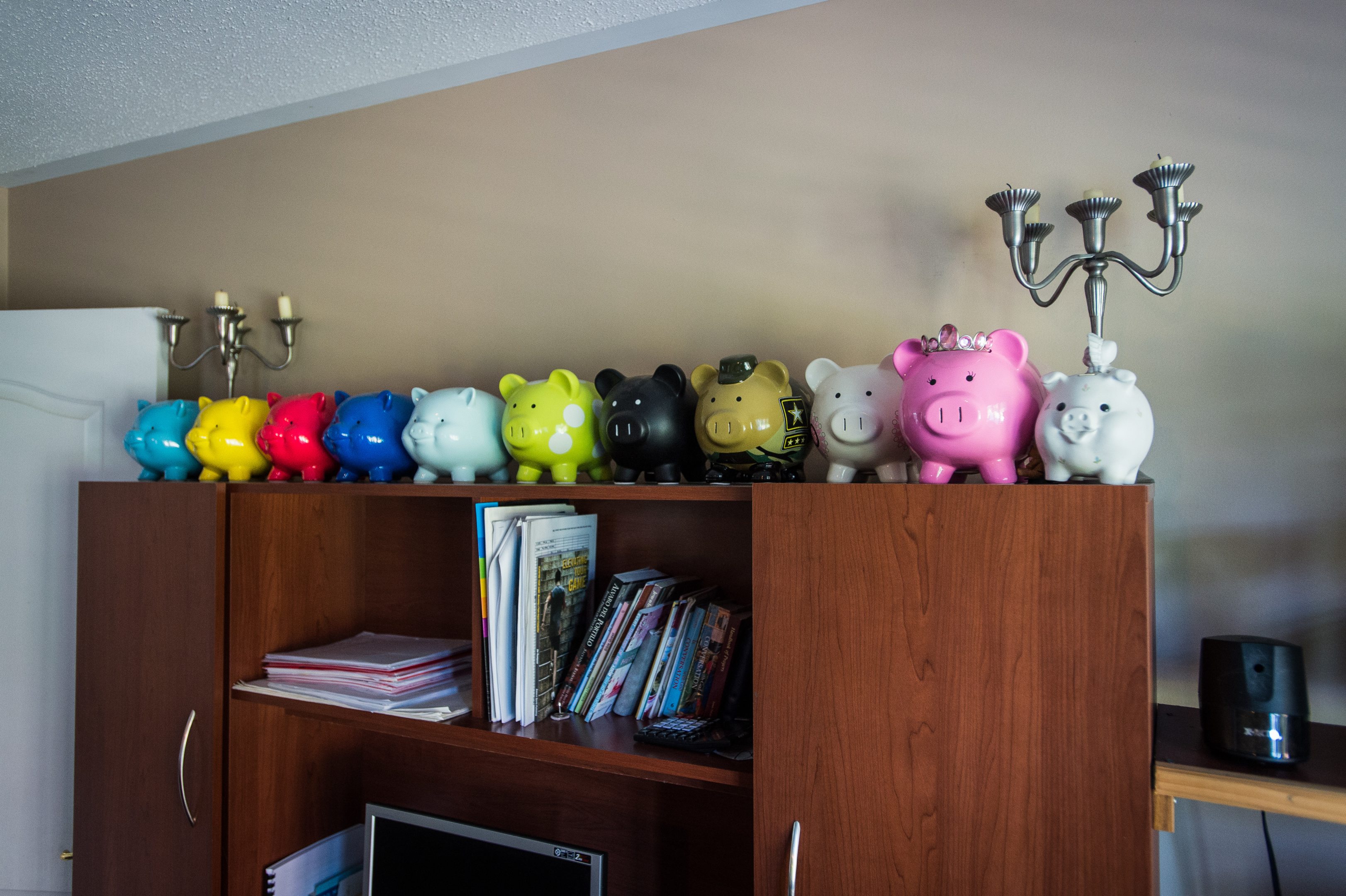 The Piggy Banks Each of the children has a piggy bank in the den. Steve and Liz give the older kids an allowance of $50 per month. 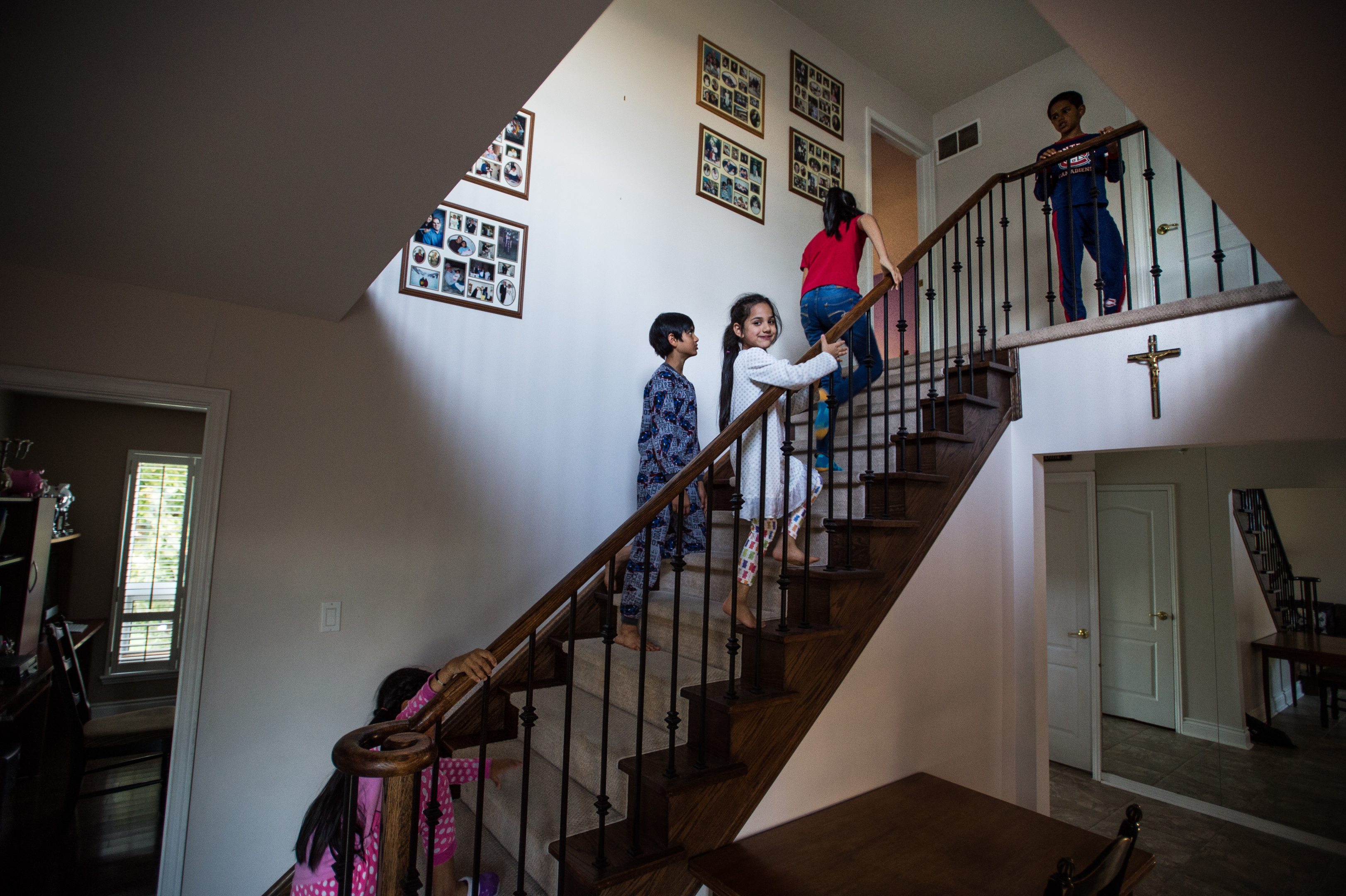 7:43 p.m. The youngsters start making their way upstairs. Bedtime is 8:30 p.m. for them, and they wake up early. The older kids stay up later and sleep in on weekends. 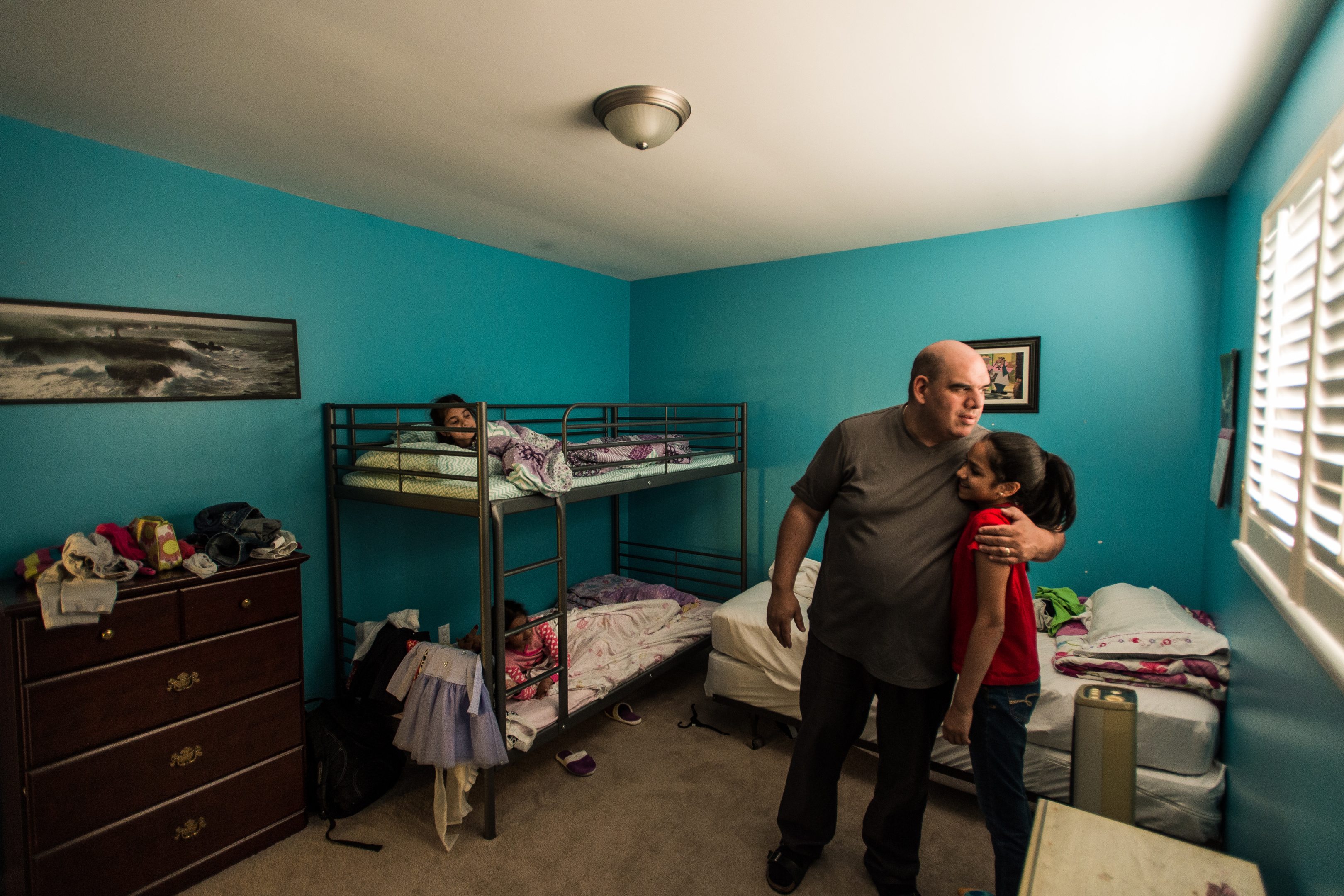 8:37 p.m. Steve says good night to Theresa, who shares a room with Katrina and Monica. The rest of the kids are two to a room: Rachel and Rebecca, Andrew and Daniel, Joseph and Thomas, Luke and Matthew. 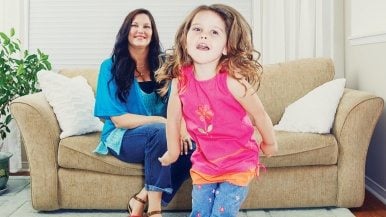 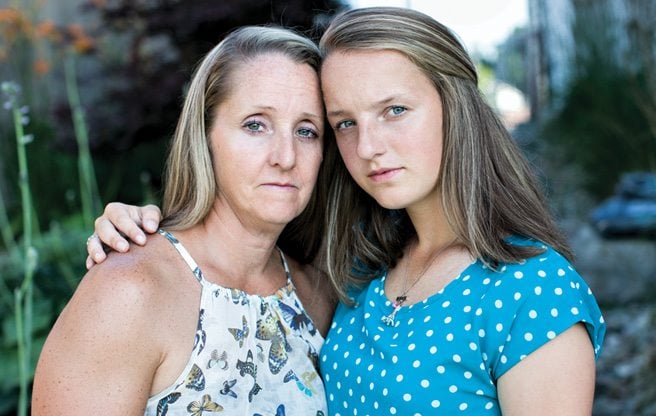 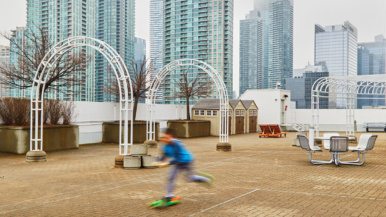 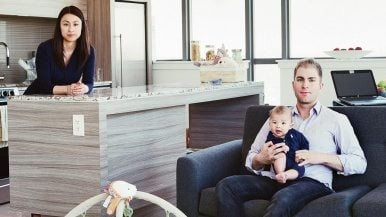