When I came home from Afghanistan, my PTSD almost killed me. Then I discovered the magic of cannabis

When I came home from Afghanistan, my PTSD almost killed me. Then I discovered the magic of cannabis 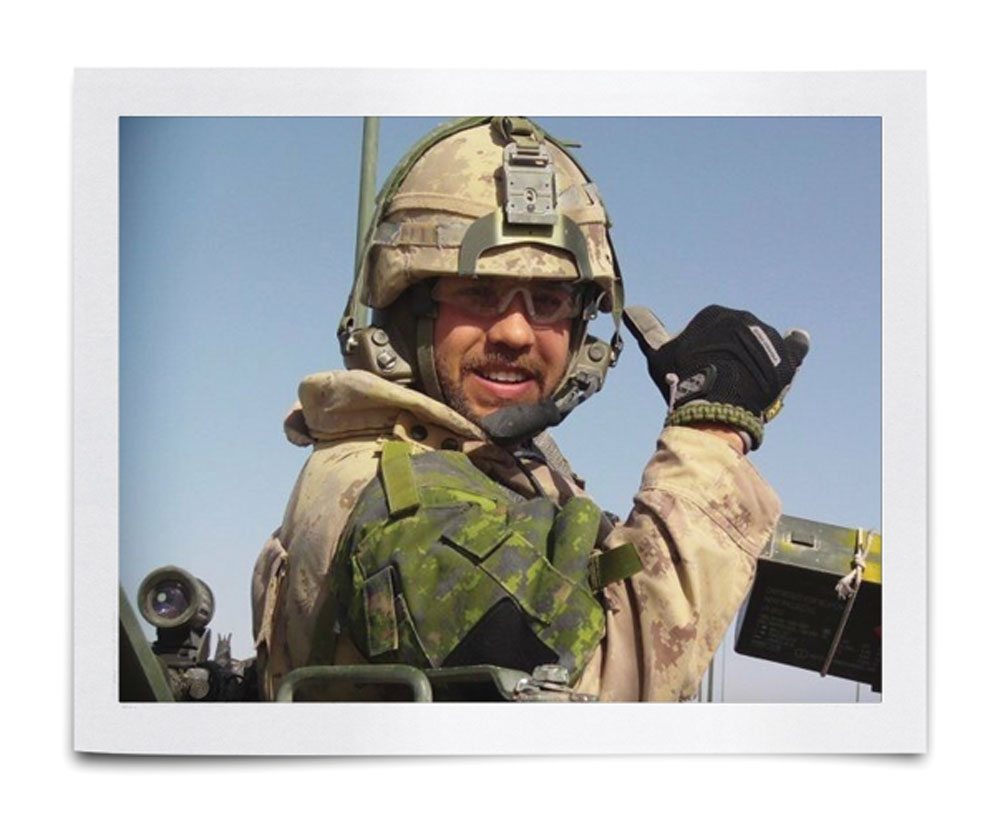 I hardly knew anything about the military when I enlisted 12 years ago. I couldn’t have told you the difference between the army and the navy, let alone the order of military ranks. But I always wanted to help people, and fighting for my country seemed like a good way to do that. For years, I bounced from base to base, learning basics in Quebec, doing drills in Alberta, jumping out of planes in Trenton. The training was relentless but rewarding. Finally, in 2008, my unit was deployed to Afghanistan. I said goodbye to my wife, Angel, and our three little girls, knowing it could be the last time I saw them.

Alarms were blaring when we landed in Kandahar. I was ushered into a bunker, where a superior calmly told us that a rocket had hit the base. His nonchalance was confusing yet comforting—if he wasn’t worried, maybe there was nothing to worry about. The camp was the size of a small city, he explained, and rockets hit all the time. “Welcome to Afghanistan,” he said.

My tour lasted eight months. Some days, I scouted enemy positions from the gunner seat of a light armoured vehicle, rolling through the dusty Afghan countryside. Other times, I kept watch on the base. I was suspicious of everything I saw: an unattended bag, a villager wearing unusual clothes, a utility pole by the side of the road. My vigilance paid off. Though I was in a number of firefights and travelled roads riddled with IEDs, I was never hurt.

Life on the base was harder than life in the field. I ached to see my family. Once, in the middle of a call home, my wife screamed, “Oh my god, she’s choking!” and hung up. I tried to call back, but I couldn’t get through. Angel had no way to reach me, so for an entire day and night, I waited helplessly, wondering what had happened. The next day, when I got word that everything was okay, I understood why so many phones and computers at the base were broken, smashed by soldiers enraged by one distant tragedy or another.

When my tour ended, my unit went to Cyprus for what the military calls “decompression.” We rode Sea-Doos by day and partied by night. Doctors warned us about the possibility of PTSD, but most of us were too hungover to care. Besides, I thought, I was fine. None of this applied to me.

I was wrong. Back home, stationed at the Downsview base, I couldn’t turn off the part of my brain that treated everything as a threat. My mind raced so frantically that I had trouble sleeping, and even the smallest things caught me off guard. Once, during an argument with my wife, I punched a hole in the wall.

At my annual physical, the base doctor recommended I get help. A psychiatrist diagnosed me with PTSD, those four letters I had dismissed back in Cyprus, and prescribed antidepressants and sleeping pills. It was a relief to understand my sudden short temper, but the news stung. My diagnosis ended my military career: I was discharged just before I hit the 10-year mark.

Before I left the army, I founded a support network for soldiers living with PTSD, where veterans from around the world could share their stories and connect with professional services. Our work saved lives, but I was losing control of mine. Desperate to ease my chaotic mind, I started taking too many sleeping pills. Some days I slept for 12, 18, even 24 hours at a time. My drug use drove me away from my home and family, and for more than a year, I lived out of my truck, swallowing pills and hoping everything would be better when I woke up. It never was.

One day in 2014, I received a Facebook message from the co-founder of a medical cannabis company for veterans in New Brunswick. He’d heard about my work and wanted to tell me about his business. I’d smoked a little in high school, but I’d never thought of marijuana as medicine. Still, I was so eager to try anything that might help, I drove 14 hours to get a prescription. When I first tried cannabis oil capsules, I was floored. The sensory overload was gone, and worries stopped circling around in my head. The oil made me alert and engaged, not sluggish or high. I felt like myself again.

I took a job as the company’s Ontario representative. We provided relief to 1,500 veterans—including me. I took cannabis capsules daily. And while they helped me pick myself up, I needed my family’s love to feel whole again. A year and a half ago, after many apologies and a lot of tears, I moved back in.

Life hasn’t been perfect. I still structure my routines around my illness: I stay off busy streets to avoid triggering my road rage, and I try not to spend too much time alone with my thoughts. But without my experiences, I would have never realized one of my proudest accomplishments: co-founding, with my wife, a clinic in Newmarket that offers mental health services for military, firefighters, police and paramedics. I’ve realized I don’t need to be in the military to make a difference. Helping from the sidelines can be just as good.

Chris Dupee is a veteran, founder of Military Minds and co-founder of Cadence Health and Wellness Inc.

Classroom confessional: “The kids are scared—not just of Covid itself but of another lockdown”

“I was stuck at home, craving dishes I had no idea how to make”: How the pandemic inspired one Toronto woman to get cooking