The best video game bars and cafés in the GTA

The best video game bars and cafés in the GTA

Video game nostalgia has spawned a wave of bars and cafés that specialize in consoles and vintage arcade games. Here are some of the best ones we could find in and around the city. 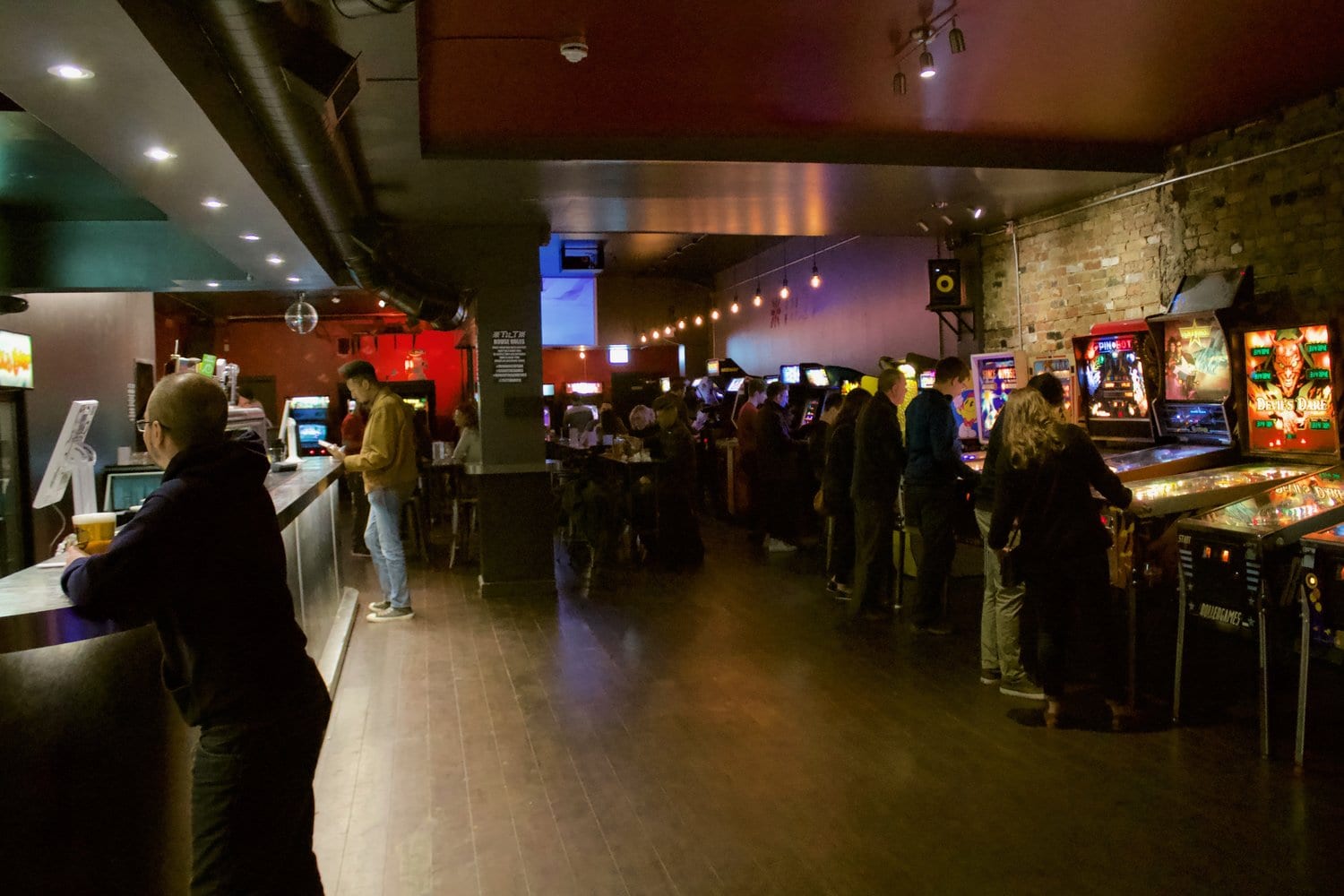 Tilt opened in 2016, originally in the Annex. After an eviction, it moved to larger digs at Dundas and Bathurst. The new space is like heaven for pinball addicts and Ms. Pacman fans, who can play over 50 vintage arcade games—all of which are set to free play (so there’s no need to worry about carrying around coins). The more popular arcade games include Teenage Mutant Ninja Turtles and Mortal Kombat 3. The Ghostbusters and Jurassic Park pinball machines are apparently always huge hits. The bar also has a few booths equipped with Nintendo and Sega consoles.

To fuel those frenetic rounds of Bubble Bobble, there’s a craft beer list that’s teeming with local breweries, including Junction Craft Brewery, Amsterdam Brewery and Mill Street. The menu is all about pub classics, and players can scarf down nachos, pirogies and poutine in between rounds. The space is available to rent for birthday or business parties of any kind, and the owners are currently working on opening a second location in the east end. 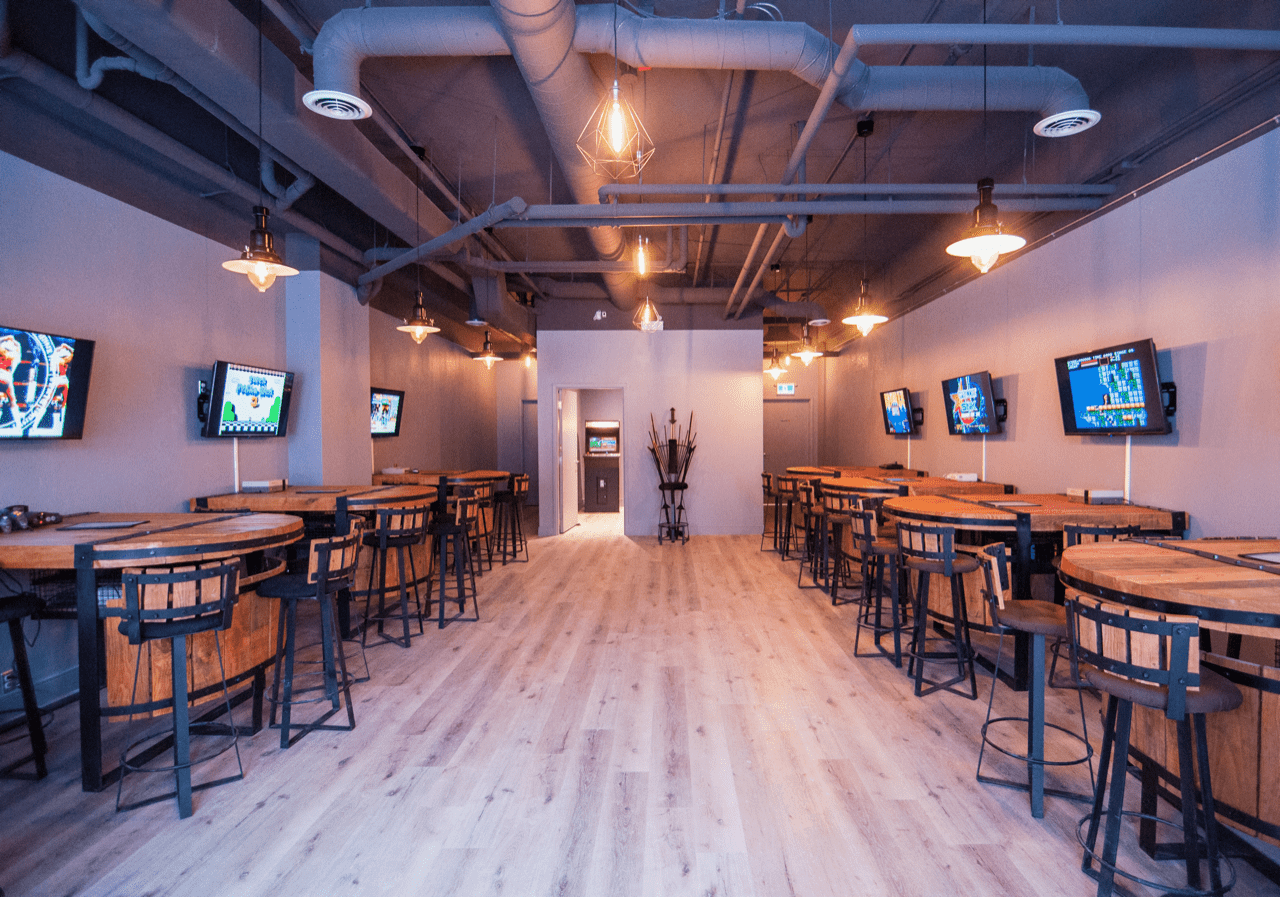 Where: Markham (60 Main St. N)
Cost to play: $10 per table, plus $5 for each console
Specialty: The kind of console-based video games you used to play as a kid

Computer technician Tony Paul opened Den Three Sixty at the beginning of 2019, mostly as an ode to the video games of his youth. As a kid in school, he found games were a great way to connect with friends, have playdates and meet new people. Now, he says, it’s all online. “No one really talks to each other anymore,” he says. “You put on a headset, sit in front of a console and chat with someone you can’t see.”

At his café, Paul wanted to bring back the face-to-face aspect of gaming. He renovated the space and had his friends design rustic, barrel-shaped tables (they’re supposed to resemble the barrels from Donkey Kong) around consoles and screens, so that groups of up to four can gather and play against each other. Visitors are encouraged to roam the space, watch other games and chat with players. His Sega Dreamcast, a cult game console from the late 1990s with an epic lineup of four-player games, has been a popular play so far. As for snacks, it’s a basic lineup of chips, coffee and tea at the moment, but Paul is looking to serve up ramen in the near future. 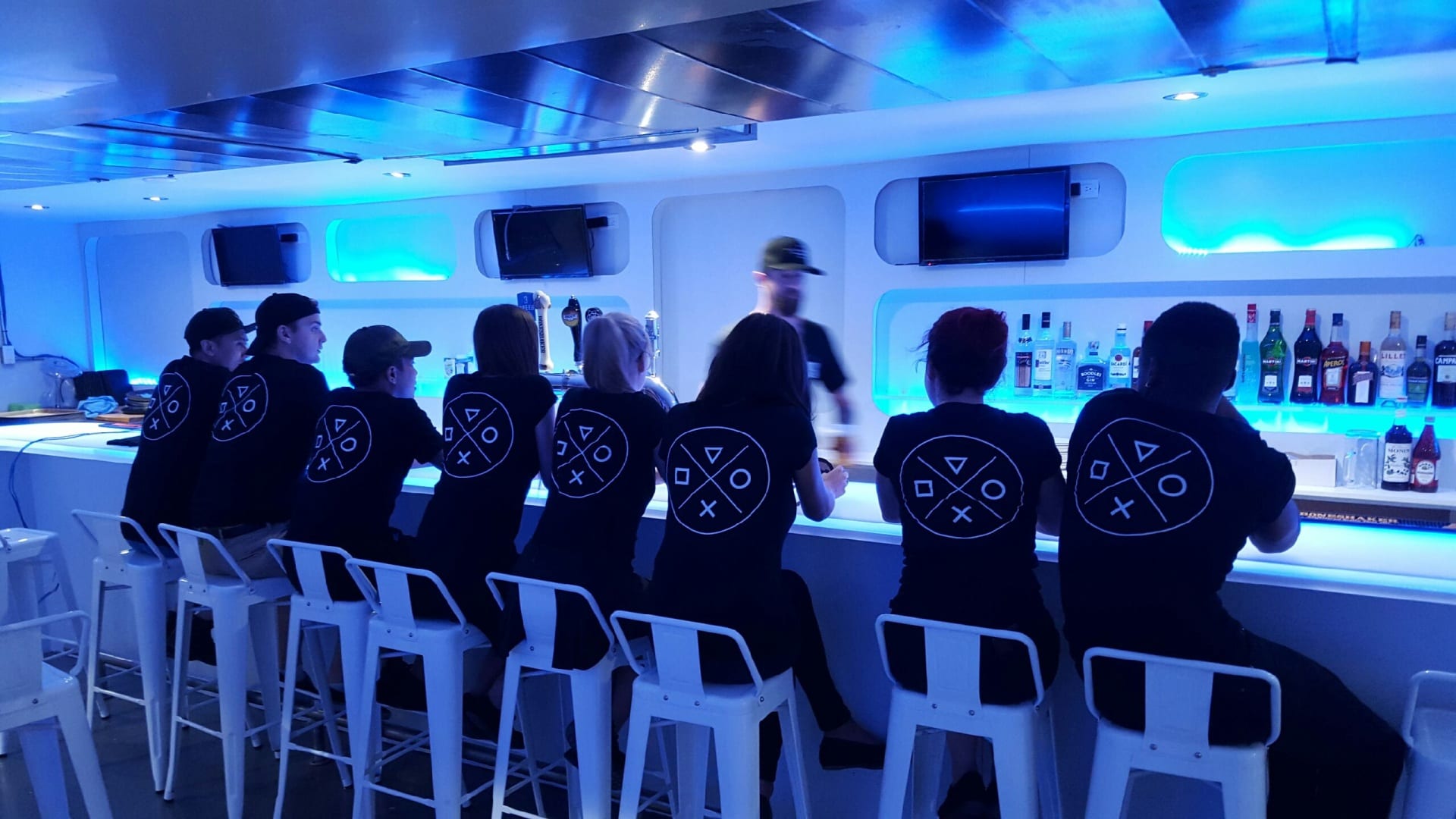 Power Up looks like the neighbourhood bar in a space-age flick, with blue LED lights illuminating the stark white furnishings. Despite the futuristic vibe, the bar prides itself on appealing to all kinds of visitors—even the ones who couldn’t get past the first level of Mario Bros. three decades ago. It’s particularly conducive to larger groups who just want to play Wii games. One whole area is devoted to a large TV screen and lounge where customers can watch their friends embarrass themselves while attempting to do the twist in Just Dance.

Another area is set up with enclosed pods, where more private gamers can challenge each other to classics like Rock Band, Street Fighter and Mario Kart. Behind the bar, cocktails are potent and mixologist-approved: the Master Chief is made with mescal and bourbon, a brown sugar cube, hickory smoke bitters and an orange rind for garnish. Visitors can also stop by just to watch e-sports tournaments on the TVs, or to participate in themed parties during events like ComiCon. 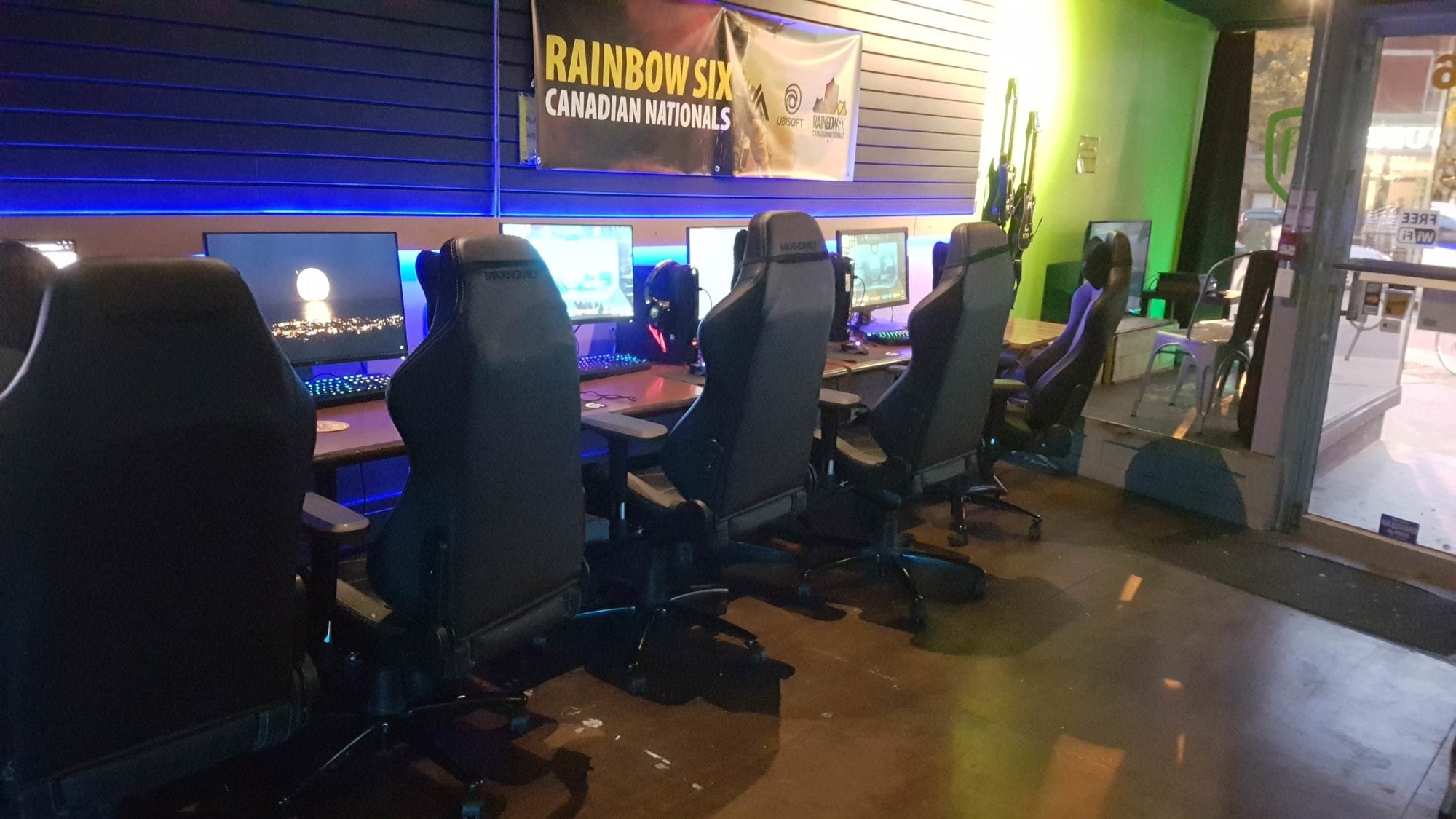 Where: College and Ossington (686 College St. W.)
Cost to play: Free with any drink order
Specialty: The latest e-sports games

Meltdown was founded by five friends who met while working together at a big telecom company. A few of them got interested in competitive video gaming when they attended a viewing party for a massive e-sports tournament back in 2013. Others, like co-owner Alvin Acyatan, were more into the hospitality and foodservice side of things. They eventually got serious about the idea of opening a bar, secured a small business loan and opened up in a former retail space on College Street in November 2016. They chose the area for its proximity to the U of T campus (according to Acyatan, e-sports fans are typically in the 18-to-25 age bracket).

At Meltdown, visitors can expect all the latest, most up-to-date consoles and personal computers, loaded with games like League of Legends and StarCraft 2. There are also a few vintage games, for when visitors want to lighten up with a round of Mario Kart. Players can fuel their competitive spirit with appropriately named cocktails, like the Jim Raynor, named after a StarCraft character. It’s made with whiskey, coffee and angostura bitters. 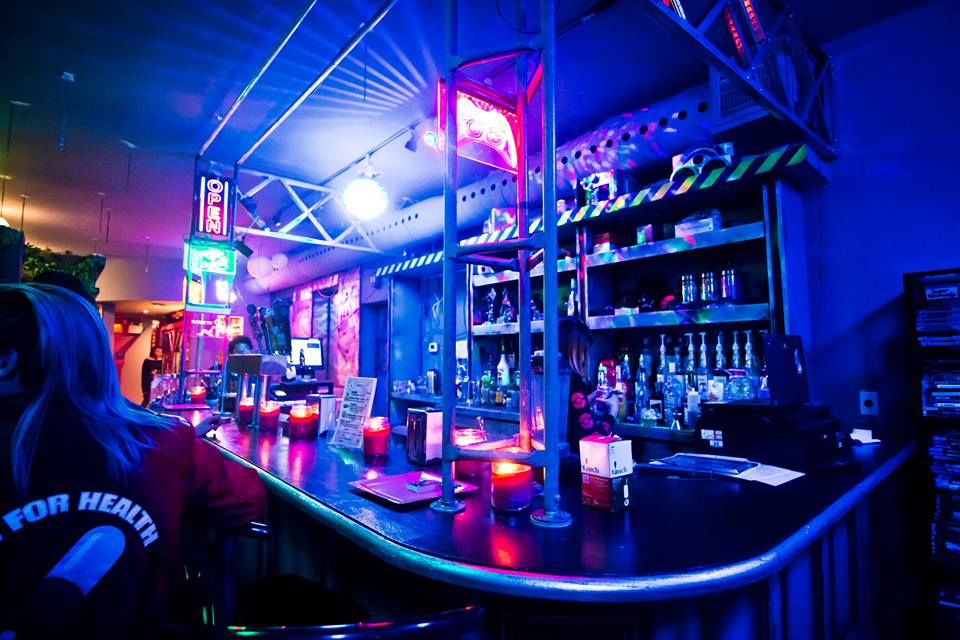 Former special effects student Sara Nguyen opened See-Scape in 2015, with the goal of creating a haven for all kinds of sci-fi fans, board game enthusiasts and gamers. “I love different types of geekdom, and wanted to bring all the fans into one place,” she says. The space boasts over 300 board games—everything from Ouija to Dungeon Quest. There are also a ton of video games, which visitors can play inside elaborately themed booths: one is decked out like a post-apocalyptic nightmare, while another is a jungle fantasy. Each is outfitted with game consoles.

A robust events calendar makes the space stand out. Nguyen regularly hosts all kinds of themed parties, including comedy nights, punk nights, magic shows and burlesque performances. Attendees are encouraged to dress up as much as possible. Above all, she loves the diversity of the space. “You get all these people who would never normally be in a room together, but they’re able to co-exist,” she says.