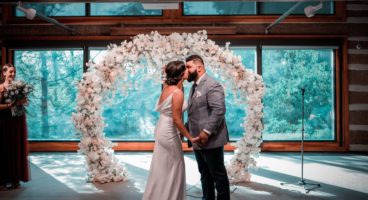 Inside an intimate ceremony at the McMichael Canadian Art Collection

Claudia Prunera, an international studies student at York, and Jay C. Bonilla, a graphic designer, were supposed to get married in Peru next year. Once Covid hit, they decided to do something small and intimate in Toronto. They had planned a small gathering at an estate rented through Airbnb, but the venue got shut down for hosting large gatherings. That left the couple with eight days to put together a Plan C. Here’s how it happened.

Claudia: I met Jay 10 years ago in Mont-Tremblant. I was born in Florida and moved to Montreal when I was a kid. Jay was visiting from Toronto for the weekend. We were both going on a hike in the mountains with some friends. We were pretty slow, so we ended up chatting a bit behind our groups. By the end of the hike, we had exchanged Facebook contacts.

Jay: I was born in El Salvador and moved to Toronto when I was two. Once we friended each other on Facebook, we didn’t really chat. If I took a picture of a meal, Claudia might say it looked really good.

Claudia: Last summer, I was on a trip to Peru, visiting some of my mom’s family. One night, I couldn’t sleep, and I remembered Jay had posted about staying up late. So I messaged him and we just started chatting from there. At first we were just catching up, but I soon realized I liked him, and our connection became romantic.

Jay: I could tell there was something between me and Claudia. We texted every day after she reached out. Coincidentally, my brother was going to Montreal for work a few weeks after Claudia got back from her trip. So I decided to tag along and meet up with her in person. 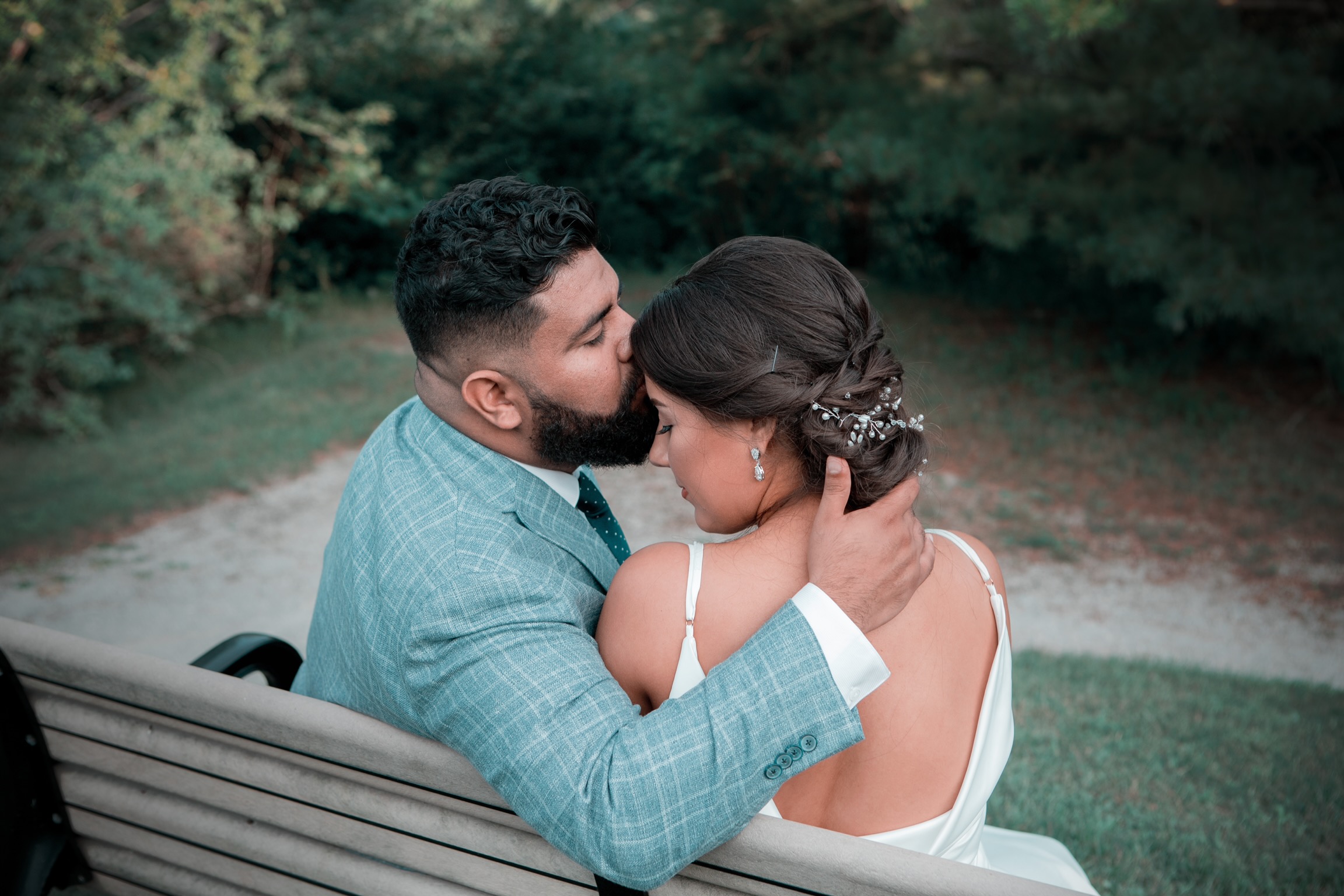 Claudia: I was extremely nervous meeting up with Jay again because I wasn’t sure what to expect. But it was great. Our first date was a walk around Mount Royal then a late breakfast at a brunch spot called L’Avenue.

Jay: We basically spent the entire week together. We had breakfast, lunch and dinner for six days in a row.

Claudia: What most couples do in two months of dating, we did in a week. Jay was a true gentleman. He would open doors for me, pull out my chair before I sat down and help me with my luggage when I was visiting. He’s also very, very funny. We were always laughing with each other.

Jay: I loved how everything I said was hilarious to her. And she appreciates all the little things I do for her. One time I noticed the phone holder in her car was broken so I bought her a new one. 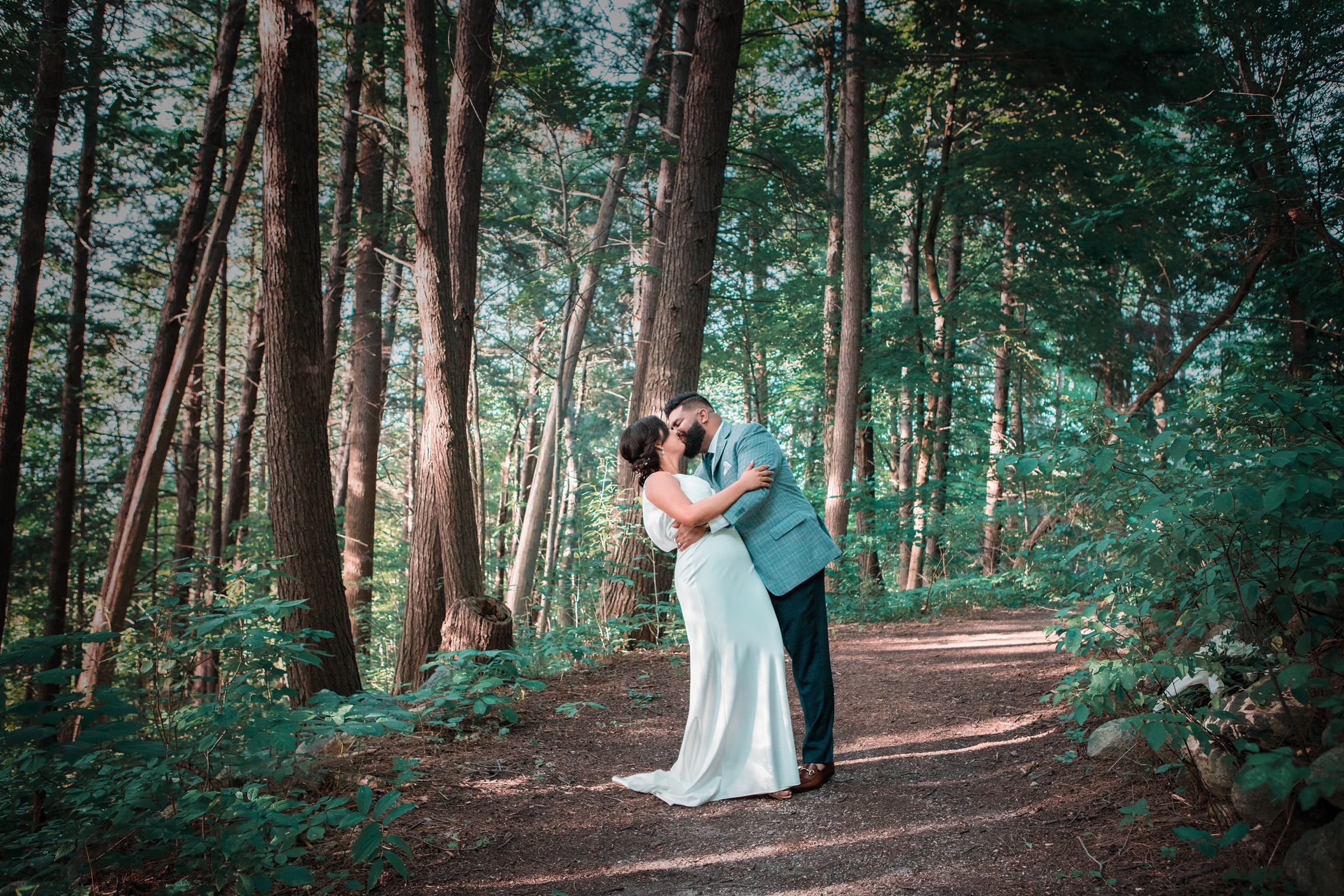 Claudia: A month later, I went to visit Jay in Toronto. That’s when we made our relationship official. His parents were doing a big joint birthday celebration with 50 friends and family. I was a little nervous to meet them. But everything went great.

Jay: I knew very quickly that Claudia and I both wanted the same things in life. She’s determined and she knows what she wants, and I do too. By December 2019, I knew I wanted to propose.

Claudia: We were still doing long-distance at the time. We would try to see each other at least once a month. Jay had come over to Montreal for the holidays, and then we did a ski trip to Mont-Tremblant with our friends.

Jay: Our friends were all in on the proposal. One evening, I tried to get our friends to convince Claudia to get dressed up and go for a walk. 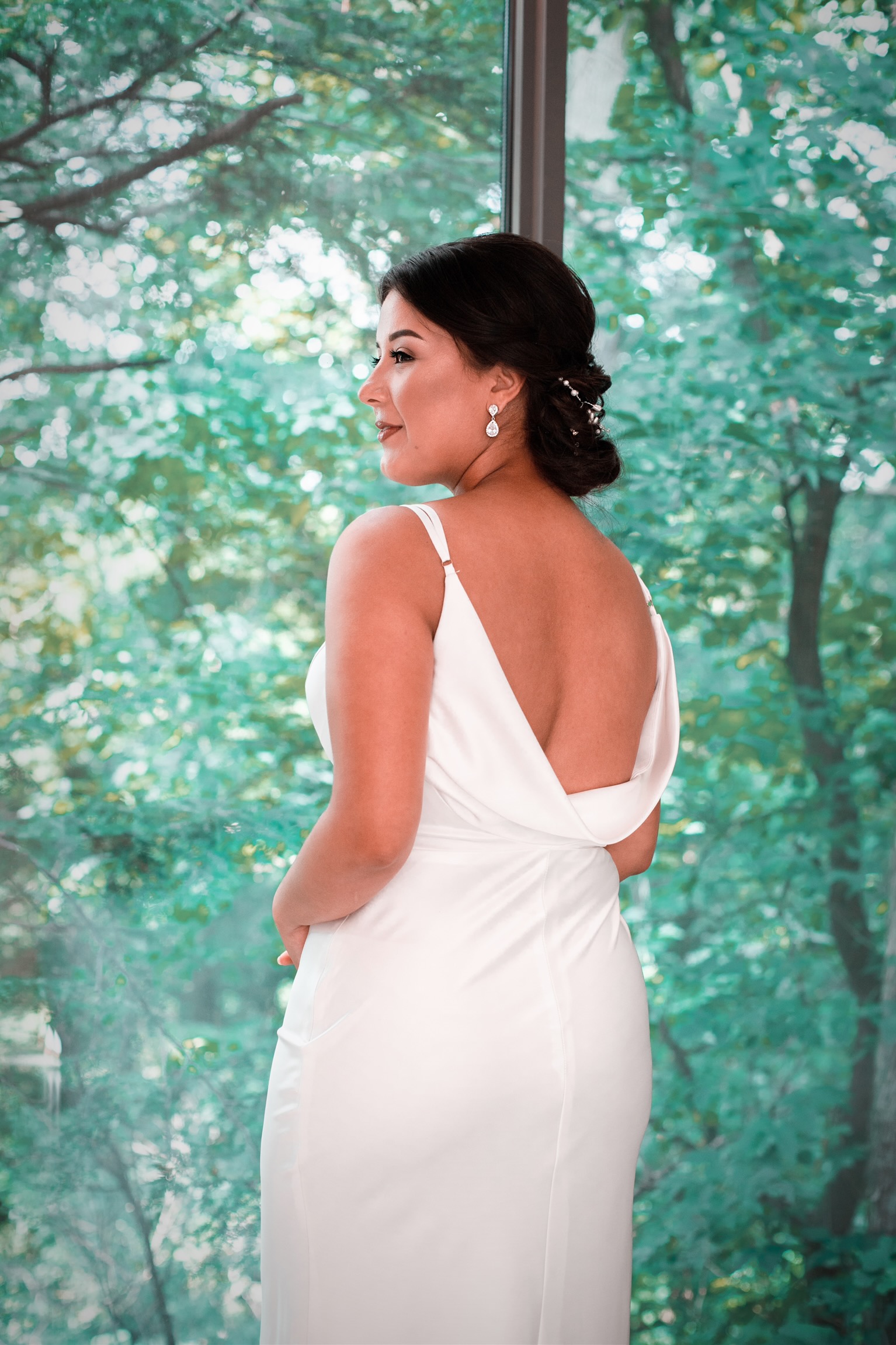 Claudia: I was like, “No, it’s cold out there! I’m going to keep my snow pants on. I’m not going to walk in my heels.” There was snow everywhere.

Jay: I ended up proposing to Claudia with her ski suit on. It was the same spot where we had first met.

Claudia: I was in shock. I didn’t think it was going to happen so soon. But we had talked about marriage before. We’re both traditional, so marriage was extremely important to us. I was super-happy.

Claudia: We started planning a destination wedding in Peru. It was going to be in outdoor garden at a historic venue in Lima. We planned to have 150 guests. The wedding industry is very different in Peru. The deposits are huge–usually 70 per cent with no refunds–and they’re paid in cash. My parents had booked a trip to Peru in mid-March to pay our deposits. 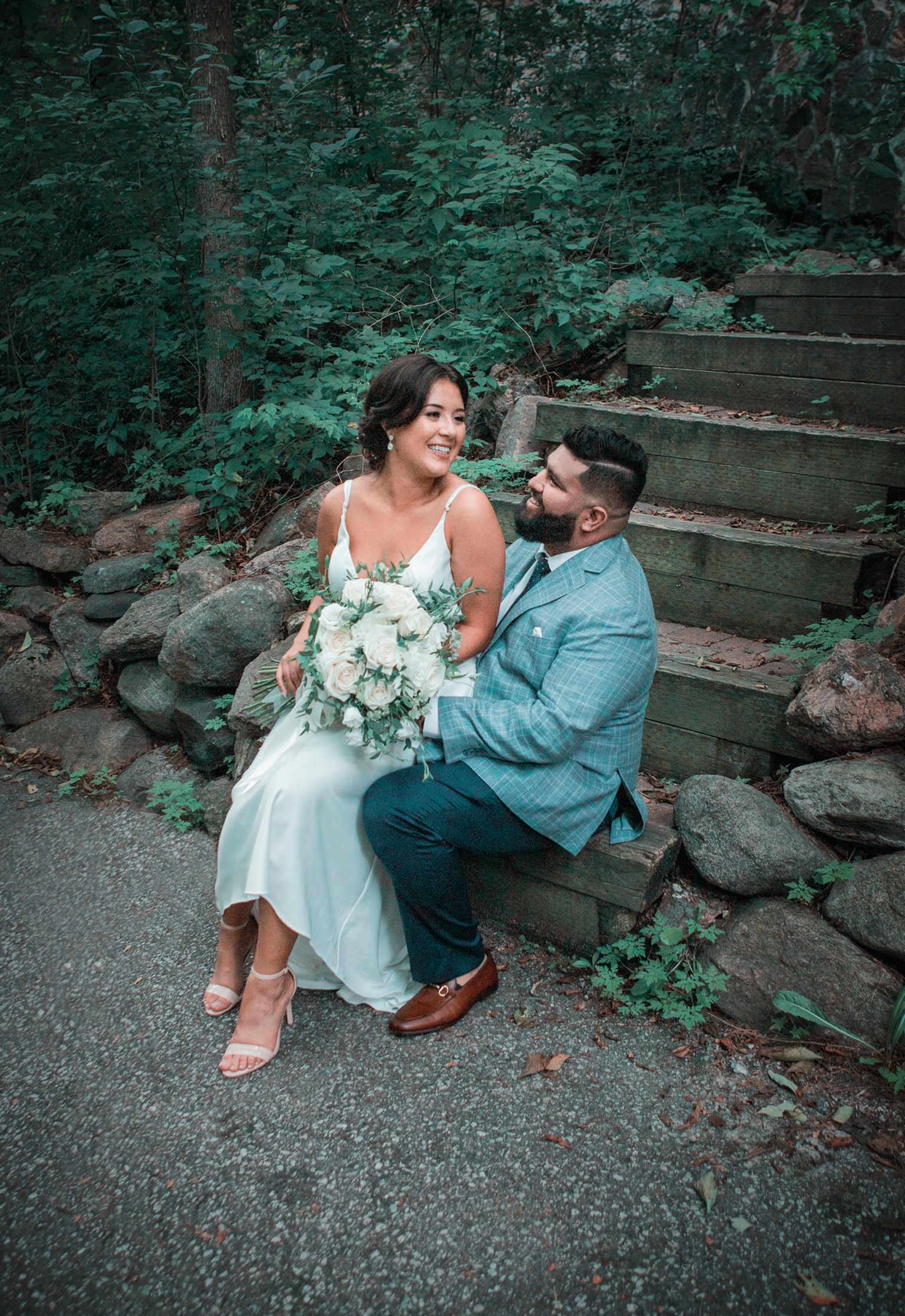 Jay: Then Covid hit. The borders shut down just a few days before Claudia’s parents were supposed to fly to Peru. That actually saved us from losing a lot of money on the wedding.

Claudia: Covid-wise, things in Peru were far worse than they are here. So when the pandemic came, we had no idea when we’d be able to have our wedding there. We still wanted to get married, so we thought, why wait? Let’s do something small and intimate here in Toronto with just with family and friends.

Jay: Initially we thought we would have a small wedding in Toronto then do something bigger in Peru once things get better.

Claudia: I was disappointed about cancelling our Peru wedding because I loved the idea of having a destination wedding in a place that’s special to me. I moved to Toronto in June, and Jay and I picked August 8 as our new wedding date. It was hard because the rules were constantly changing. At first we thought we could do something small at a restaurant, but then they had to close because of Covid. Then we started looking at Airbnbs. In June, we found a beautiful estate in Schomberg that we could host our ceremony and reception, so we booked it. By that time, gatherings could be up to 10 people. Then by the end of July, gatherings went up to 50 people. 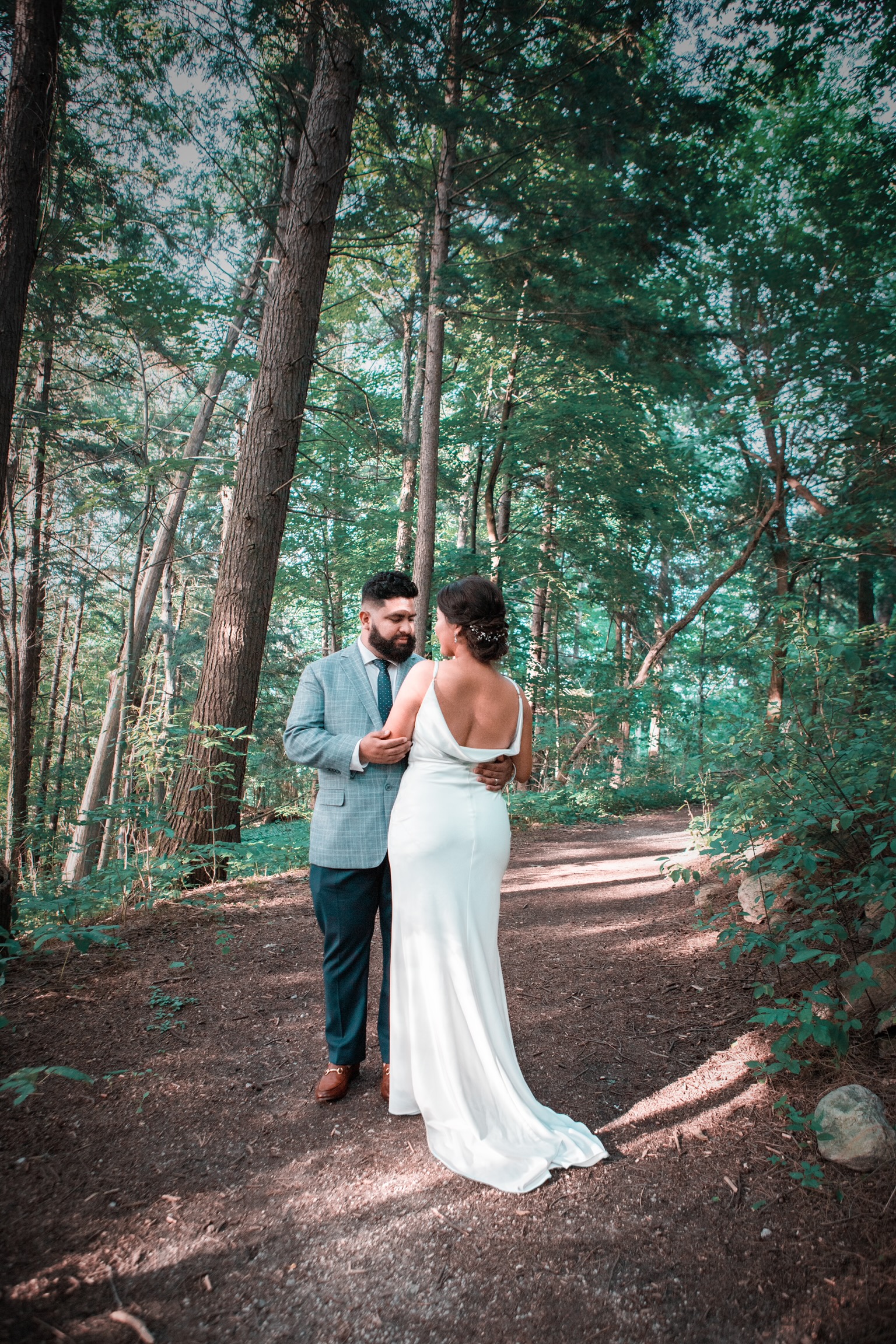 Jay: We planned to have 36 people at our wedding. It was mostly my family since some of Claudia’s family lives out of the country. We had everything booked—decor, musicians, photographers.

Claudia: Eight days before our wedding, I was scrolling through the news and saw an article that said 10 people tested positive for Covid after a large gathering in Schomberg. I thought, How funny. My wedding’s in Schomberg. Turns out, it was the very same venue that we had rented out. I freaked out. I contacted the host and she said not to worry about it. She tested negative and the house had been fully sanitized. Then later that day, I got a notification from Airbnb that our reservation had been cancelled. Our host wasn’t picking up the phone so I called Airbnb. They said they had to remove the venue from Airbnb because they were hosting parties of over 100 people in Phase 2 before it was allowed.

Jay: At that point, we were left without a venue, but everything else was paid for. So we had to find a venue and redirect everything to the new place. It was chaotic.

Claudia: Before Covid, we had gone to a restaurant called Perla Oyster Bar for Jay’s mother’s birthday near his parents’ place in Woodbridge. We called them up and they were so accommodating. They would close out the restaurant just for our wedding and put together a special menu for us.

Jay: Now we just had to find a place for the ceremony. But that was the hardest part. Some of them weren’t even answering the phone. Or if they did answer, they were quoting us $4,000 for a 30-minute ceremony. Finally, I called the McMichael Canadian Art Collection in Kleinburg, which had just re-opened for weddings and could accommodate us for a good price.

Claudia: We went to see it and we loved the place. Initially we thought we would do the ceremony outdoors. But the coordinator wanted to show us the alternative space inside in case it rained. It was so beautiful. It had high ceilings and open glass walls. So we decided to get married there. It would be a fun experience for our guests too because they would walk through the gallery first before they got to the ceremony. 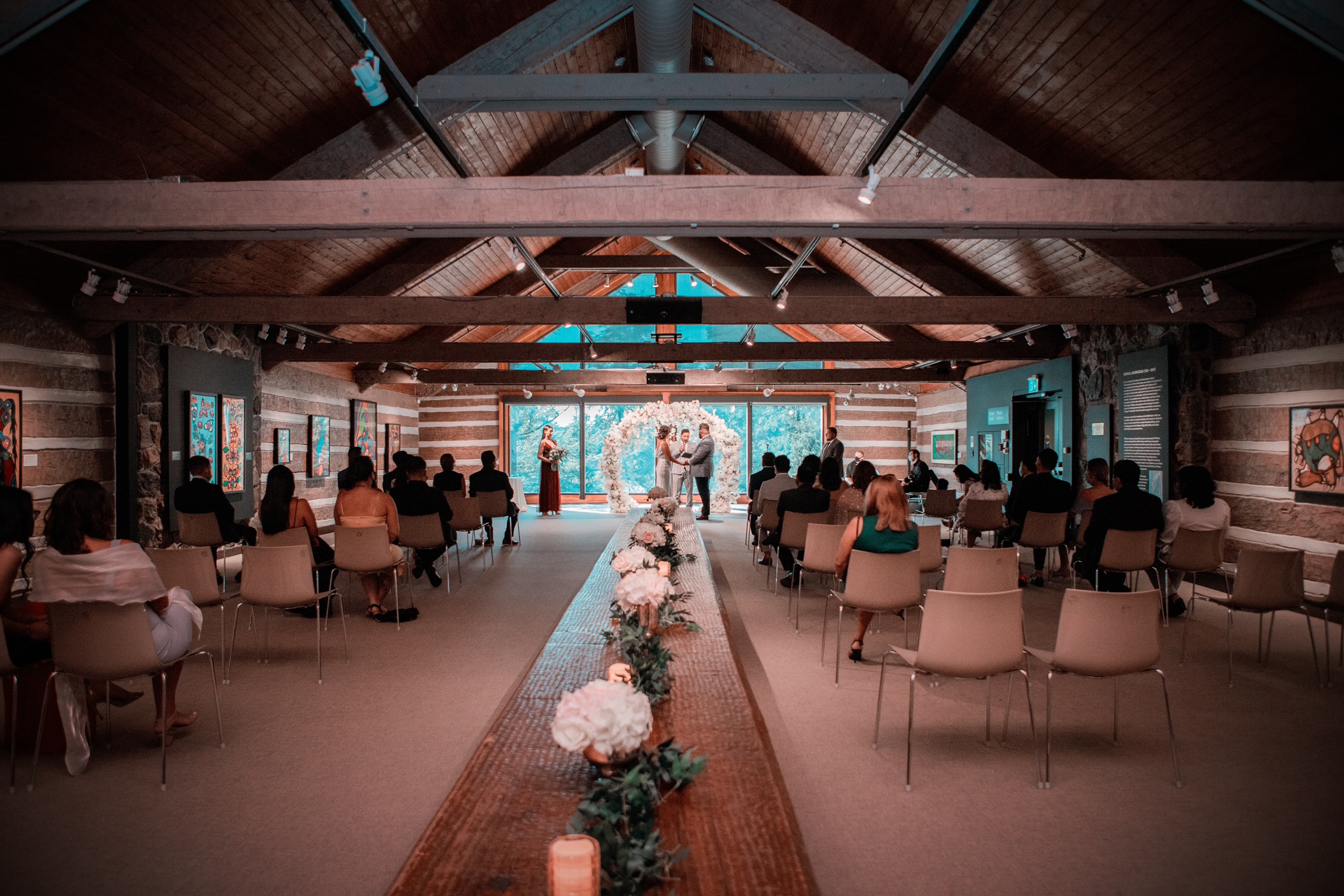 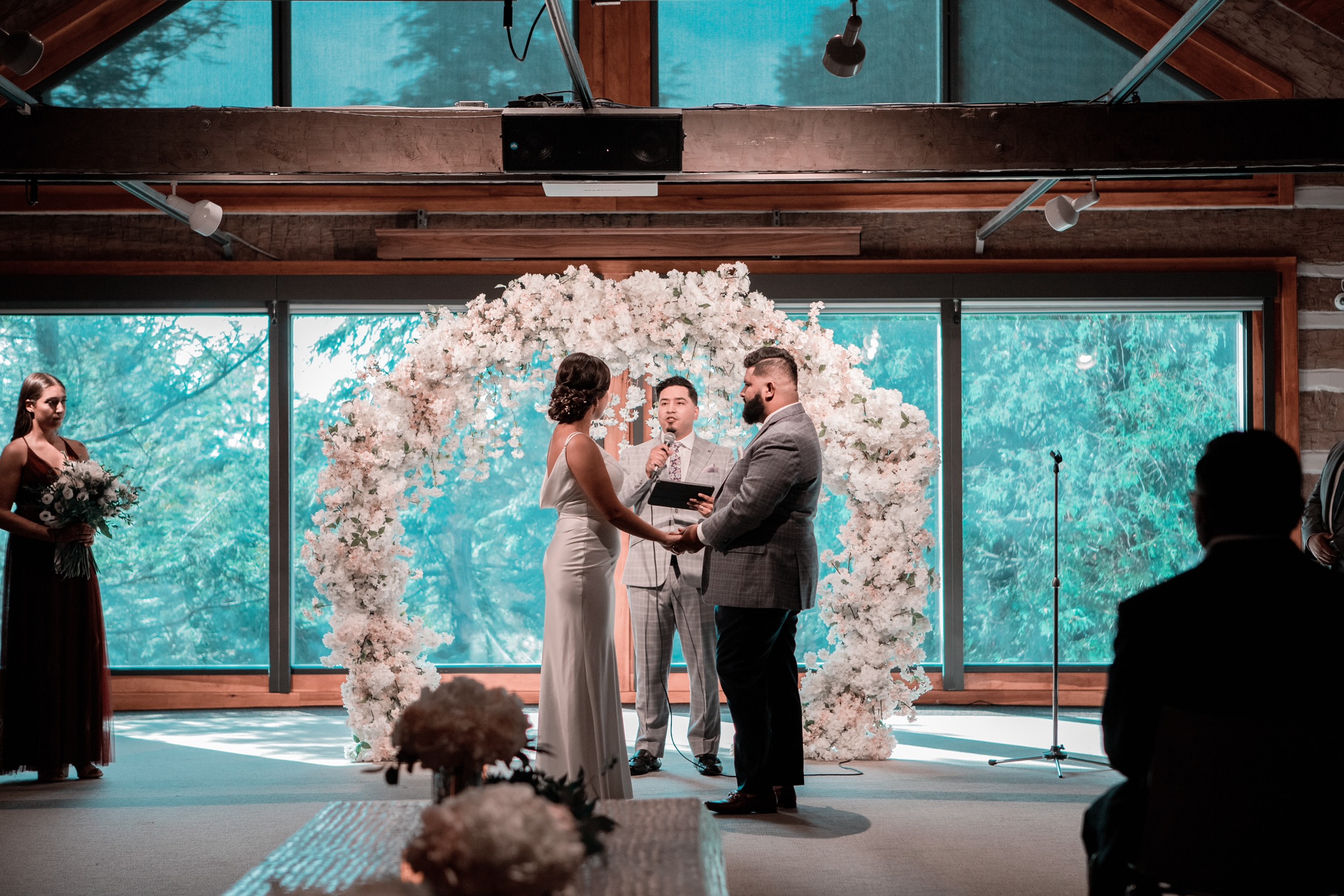 Jay: My brother is a pastor at a church. He recently got licensed to do weddings, so ours would be his first wedding. That was pretty special. I was still a nervous wreck, though. Our ceremony was supposed to start at 5:30 p.m. but the bridal party didn’t come out. I thought, Oh my god, did she leave? It turns out they had to close part of the gallery for the ceremony and were waiting for one guest who was running late. Fifteen minutes later, around 5:45, the bridal party emerged. And that’s when I started crying.

Claudia: I had tears coming down my eyes when I was walking down the aisle, too. We hired a violinist and a guitarist to play “Latch” by Disclosure. We had an unplugged ceremony, so no one would be on their phones taking pictures. We wanted everyone to really be in the moment. It was a very emotional experience. You could really feel the love in the atmosphere. There were a lot of tears all around. It was a special moment to celebrate so much love in the middle of a pandemic.

Jay: The ceremony lasted about 45 minutes. Then our guests went to the restaurant for cocktail hour and Claudia and I took some pictures around the venue and in the forests around the gallery. 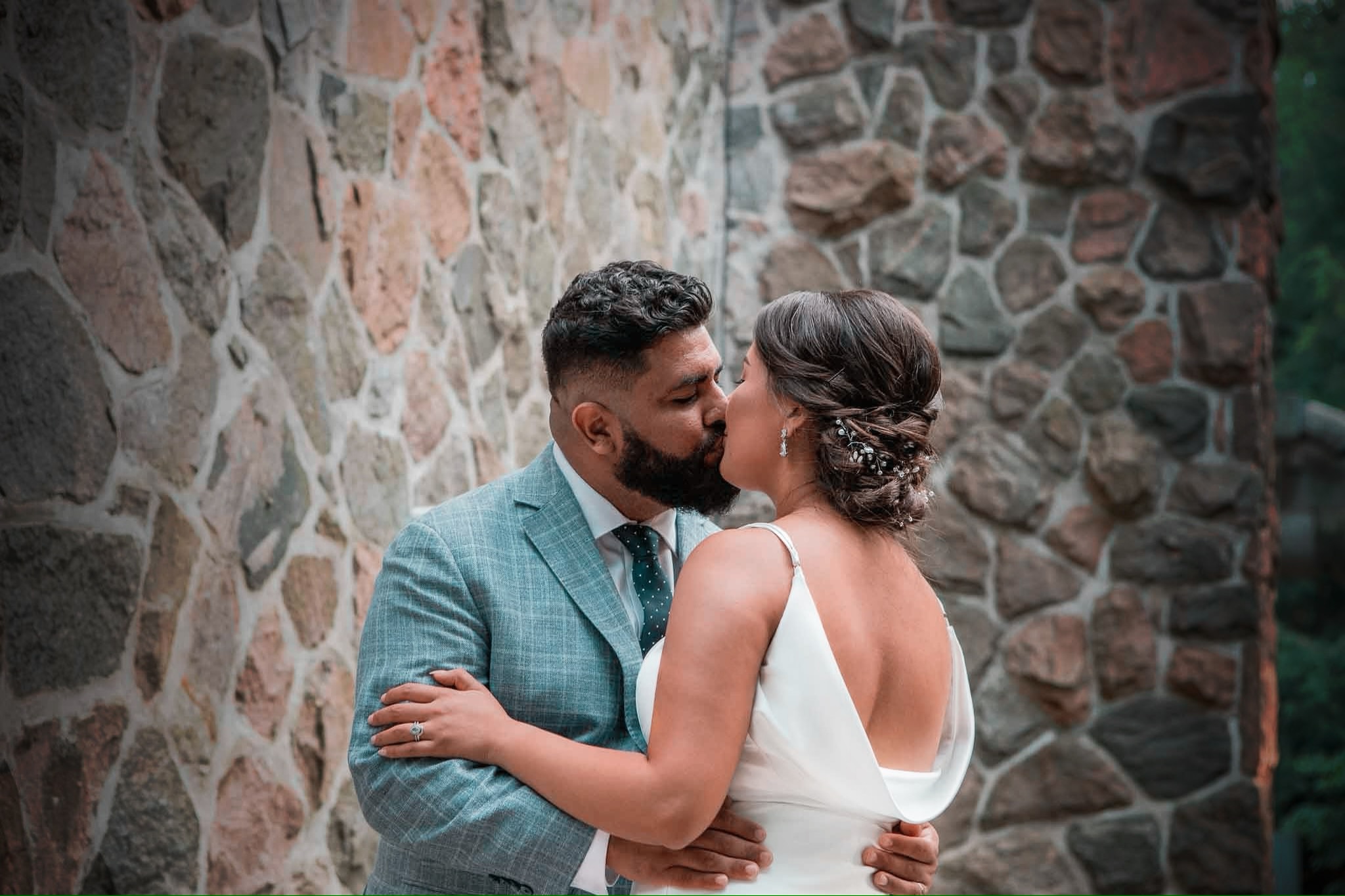 Claudia: We hired a mariachi band to play at the restaurant. They were great. And the food was so good. We started with hors d’oeuvres served buffet-style by a staff member. Then we had a seated dinner.

Jay: The reception wrapped up around midnight. I remember getting into the limo with Claudia to go home. My feet were pounding like crazy. I felt so relieved that we pulled it off.

Claudia: We gave each other this look and I said, “Oh my gosh, like, what just happened?” I felt so relieved too. I thought, I’m never planning a wedding again! Forget about that second wedding in Peru.

Jay: I was really happy that our Schomberg wedding got cancelled because our actual wedding was way better than what we had originally planned.

Claudia: I would have loved to do a wedding in Peru because I could’ve had my whole family there and it would have been a nice opportunity for Jay’s family and our friends to experience my country. But I totally loved the intimacy of our wedding. It was really special.