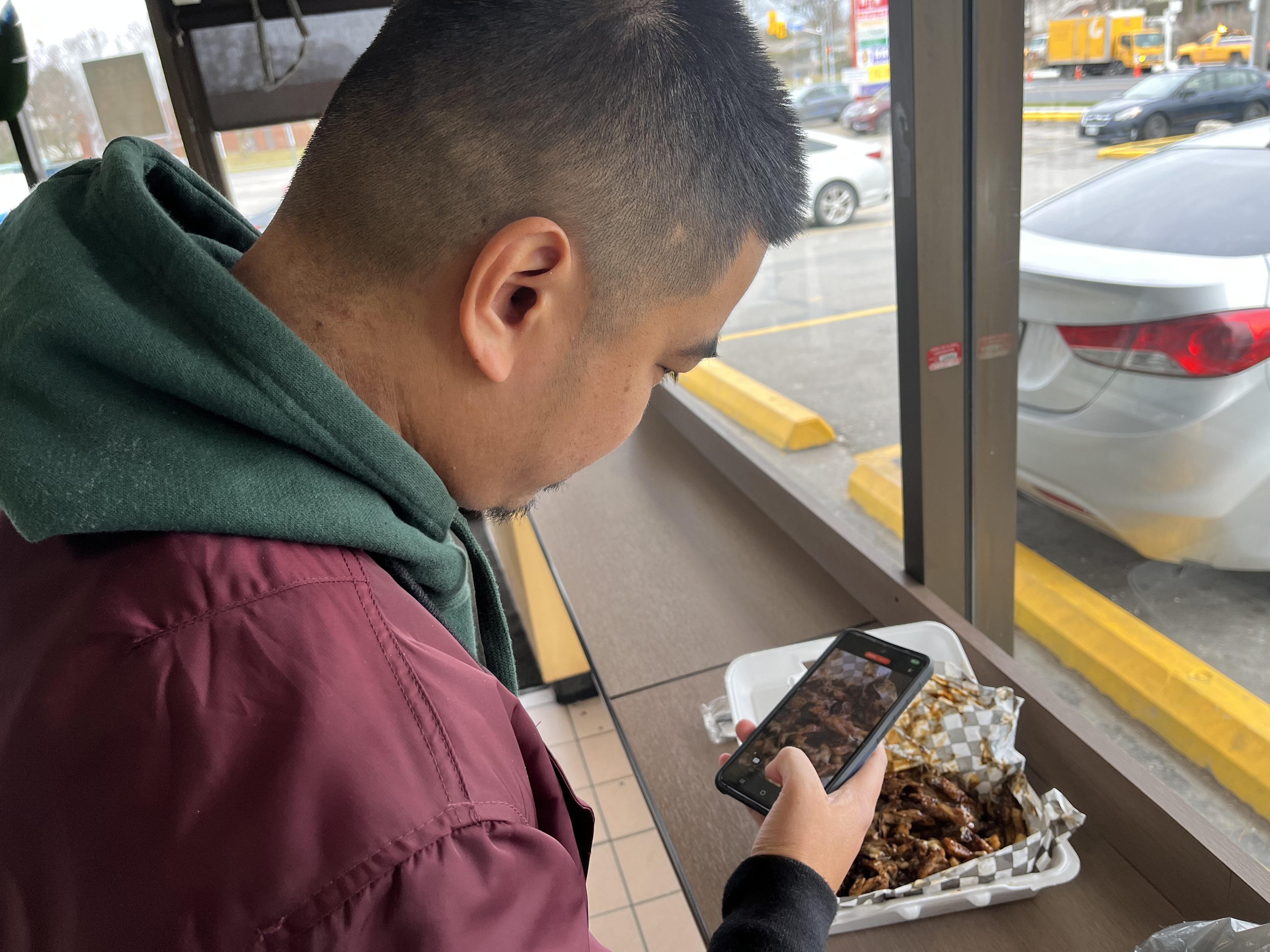 Jesse Asido is the face behind the wildly successful Instagram account @ScarboroughSpots, a digital love letter to his hometown. What began in 2020 as a feed showcasing the east-end suburb has exploded with an online fanbase made up of more than just Scarberians. “So much of what we see in the media about Scarborough is primarily negative,” says Asido. “Nobody was really celebrating the true Scarborough, so I started the account as a place for all of us to come together.”

In collaborating with local business owners and organizations across the suburb, Asido has focused on the theme of food: in addition to showcasing many of Scarborough’s restaurants, he has created custom limited-release apparel for his favourite spots (like T-shirts honouring Real McCoy Burger and the patties at Warden station), all of which is for sale in his online shop. A portion of his profits go back into the community via local charities and non-profits such as Love, Scarborough.

Asido is someone who’s always on the move (his car is basically his office), so here are some of his favourite places to eat on the go in Scarborough. 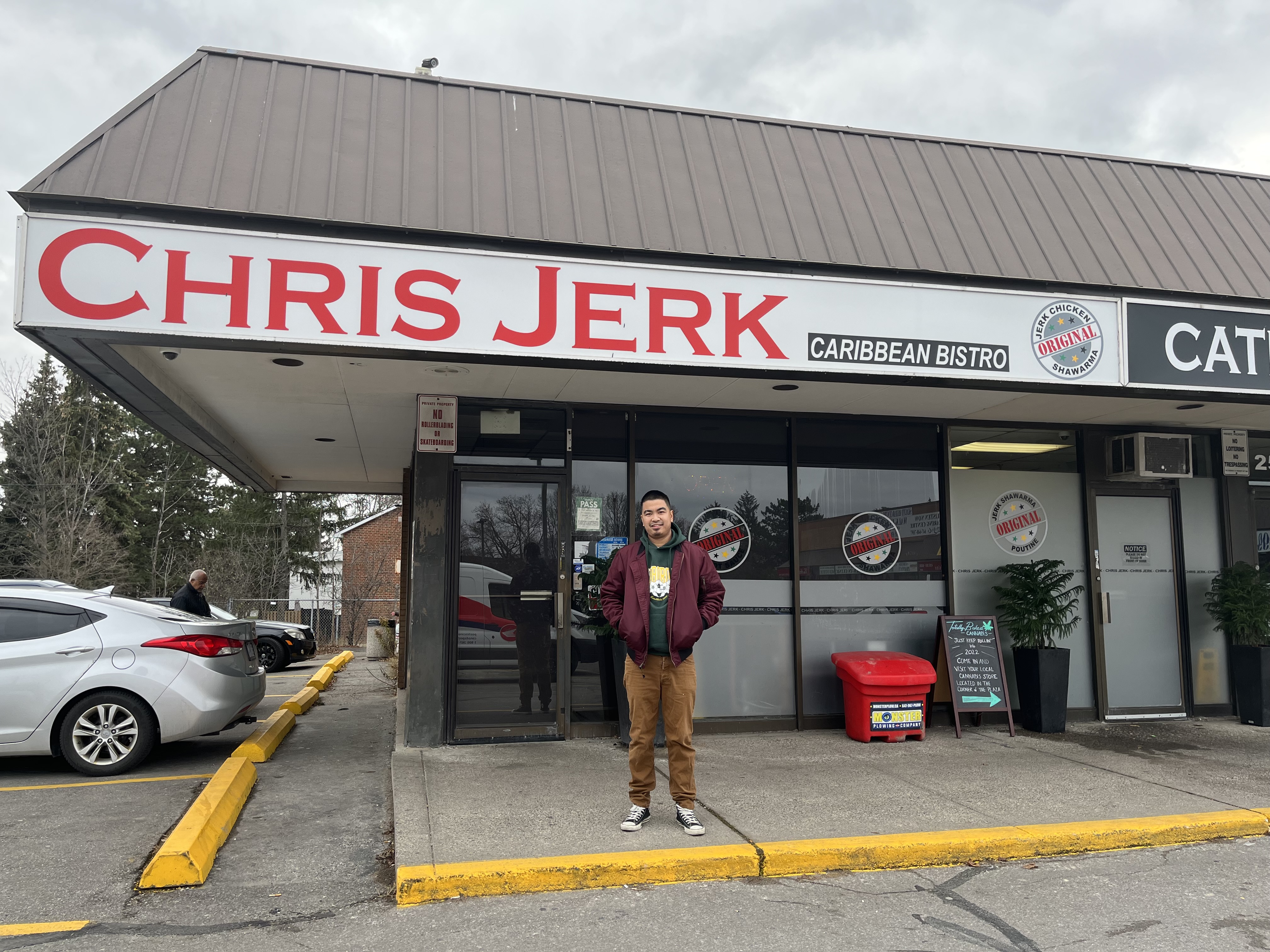 A friend who lives in the area introduced me to Chris Jerk about five years ago. And, ever since my first bite, I’ve been hooked. There’s always a lineup for chef Chris Taylor’s food because everything is so flavourful and reasonably priced—and the portions are huge. A word of advice I’d offer to anyone visiting for the first time is to get there right at 11 a.m., when they open, otherwise you can expect a long wait before placing your order. Also, there’s no on-site seating, only a small high-top counter. For me, it kind of works out, because I’d usually eat in my car anyhow—or outside if it’s a nice day. It’s also worth mentioning that the Weeknd, a born-and-raised Scarberian, knows what’s up. 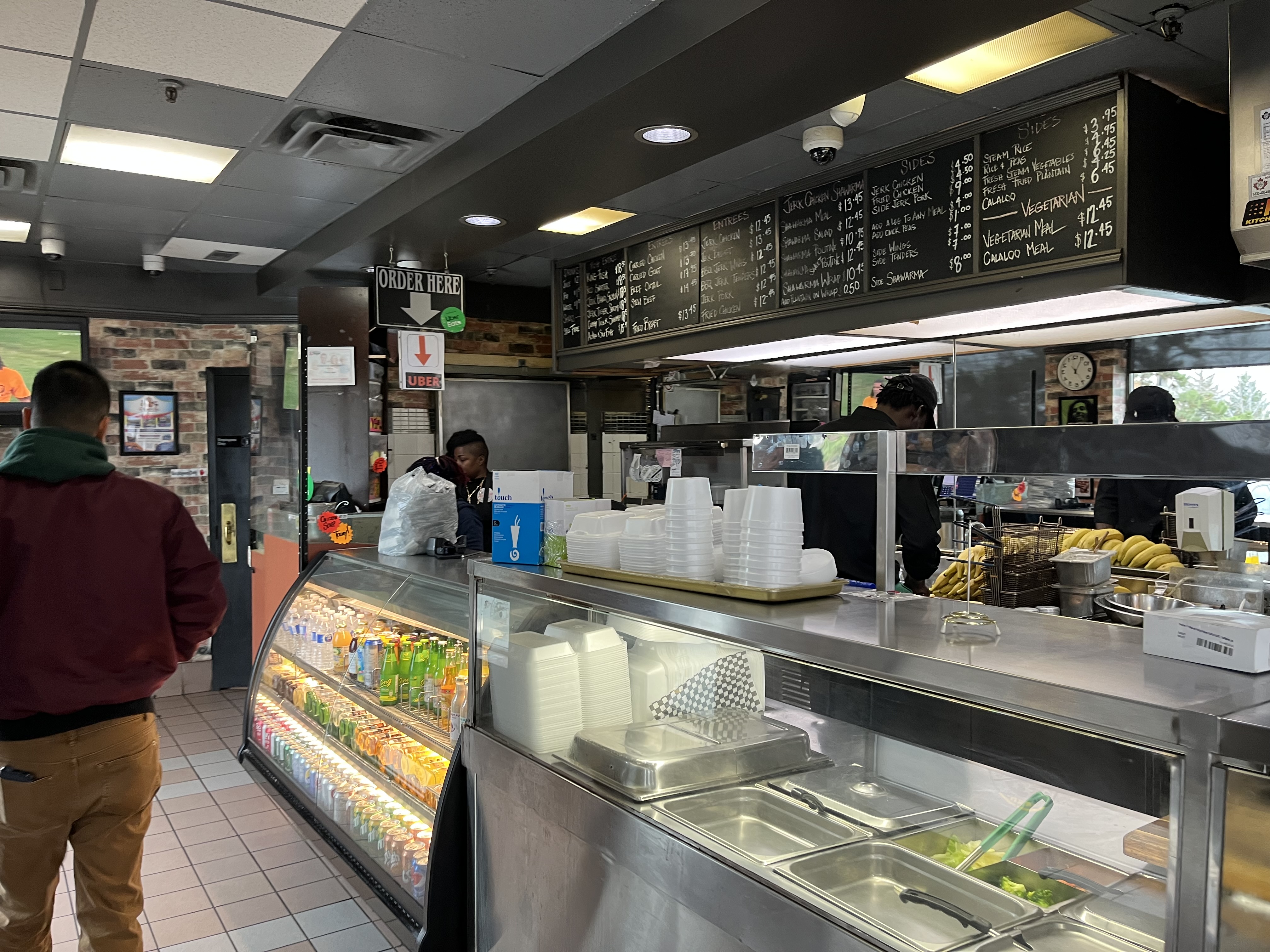 Go-to dish: Jerk chicken shawarma poutine
Tasting notes: We like things spicy in Scarborough, and this would rank about 6/10 on the Scarborough spice scale. I enjoy this for lunch—it’s very filling and can easily feed two people or one very hungry person. Time and again, it’s my top pick because it’s a great mix of textures and flavours: the piping hot fries, the thick beef gravy, the char on the tender spiced chicken that’s shaved to order from the spit, and the melted cheese with some serious pull. It’s a signature item for a reason. It may not look pretty, but it’s definitely “ugly delicious.” 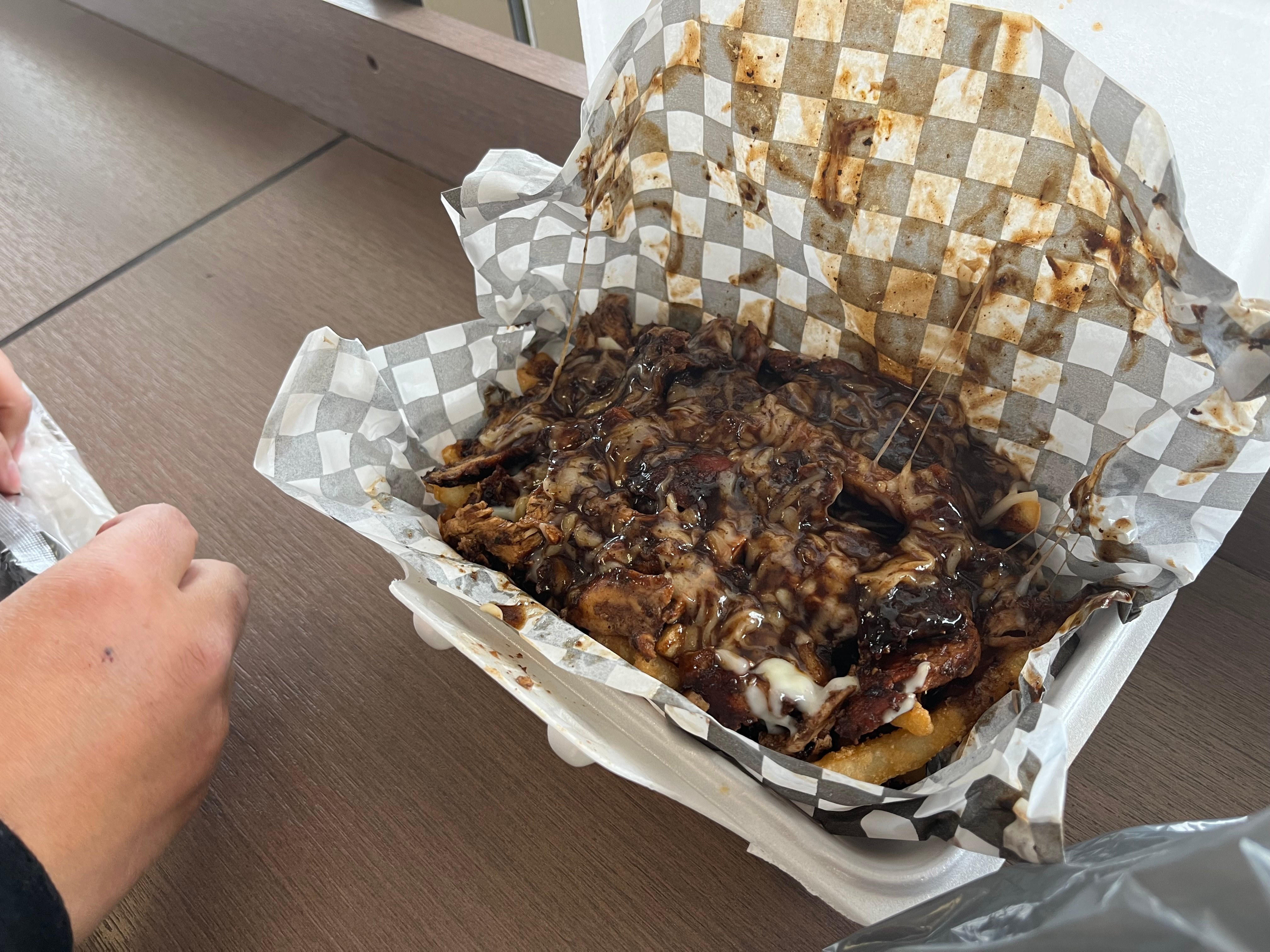 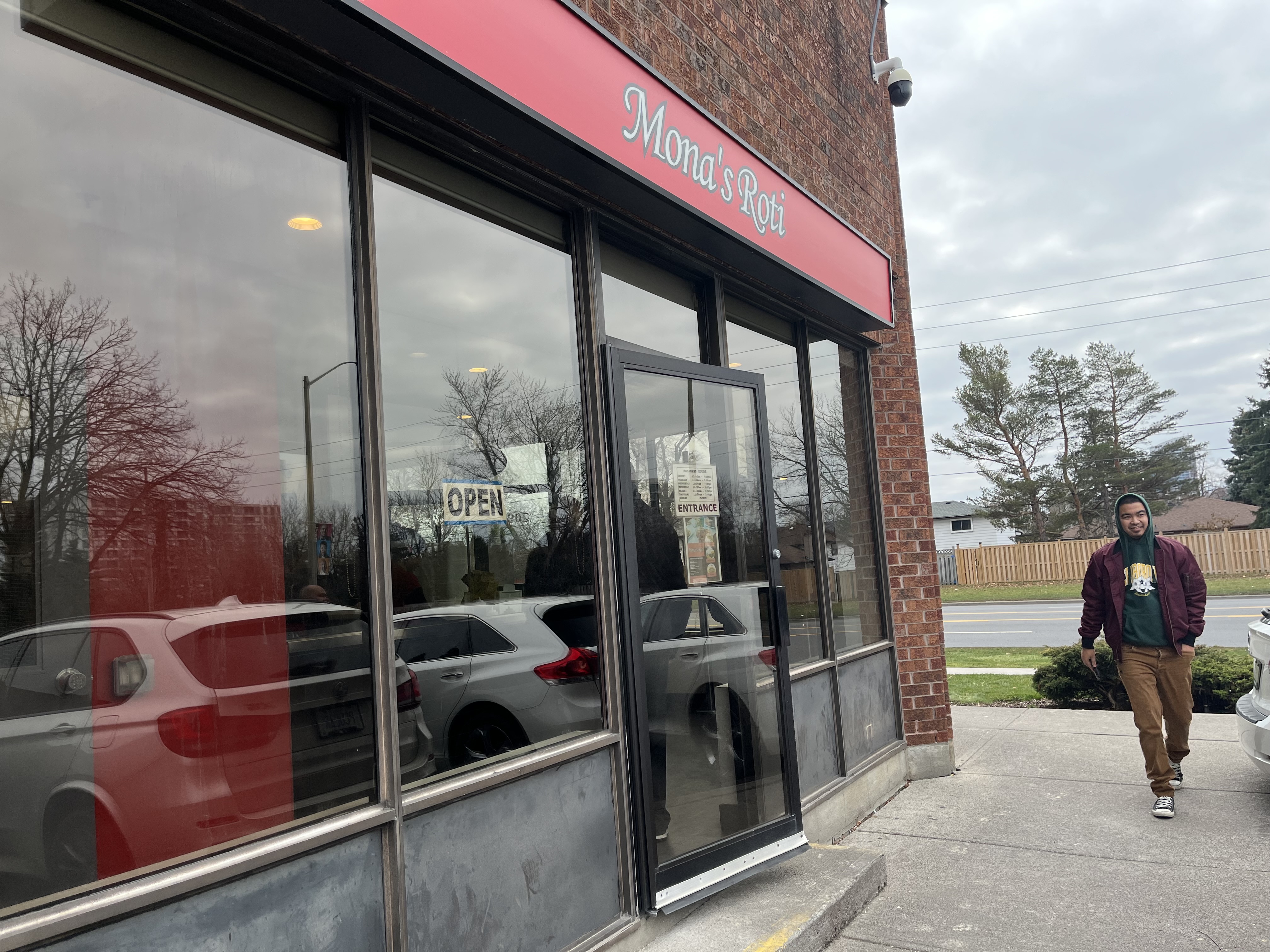 I learned the hard way that the parking lot here can be a headache—it’s often crammed with cars because there’s a Service Canada a few doors down. But I’ve been coming here for over a decade now, so I know better. Whenever I visit, I try to park in the Tim Hortons lot just east of Mona’s. Despite having to play bumper cars, it’s always worth it to come here. It’s a pretty legendary spot, family owned and operated since 1983. I love the open-concept kitchen: you can see everything being made from scratch and with care. I actually welcome the lineups—and there’s always a lineup—because that’s my time to zen out. As you can guess, I’m always on my phone, but when I come here, I put it away and instead watch the aunties prepping the food. It’s like a beautifully choreographed dance. 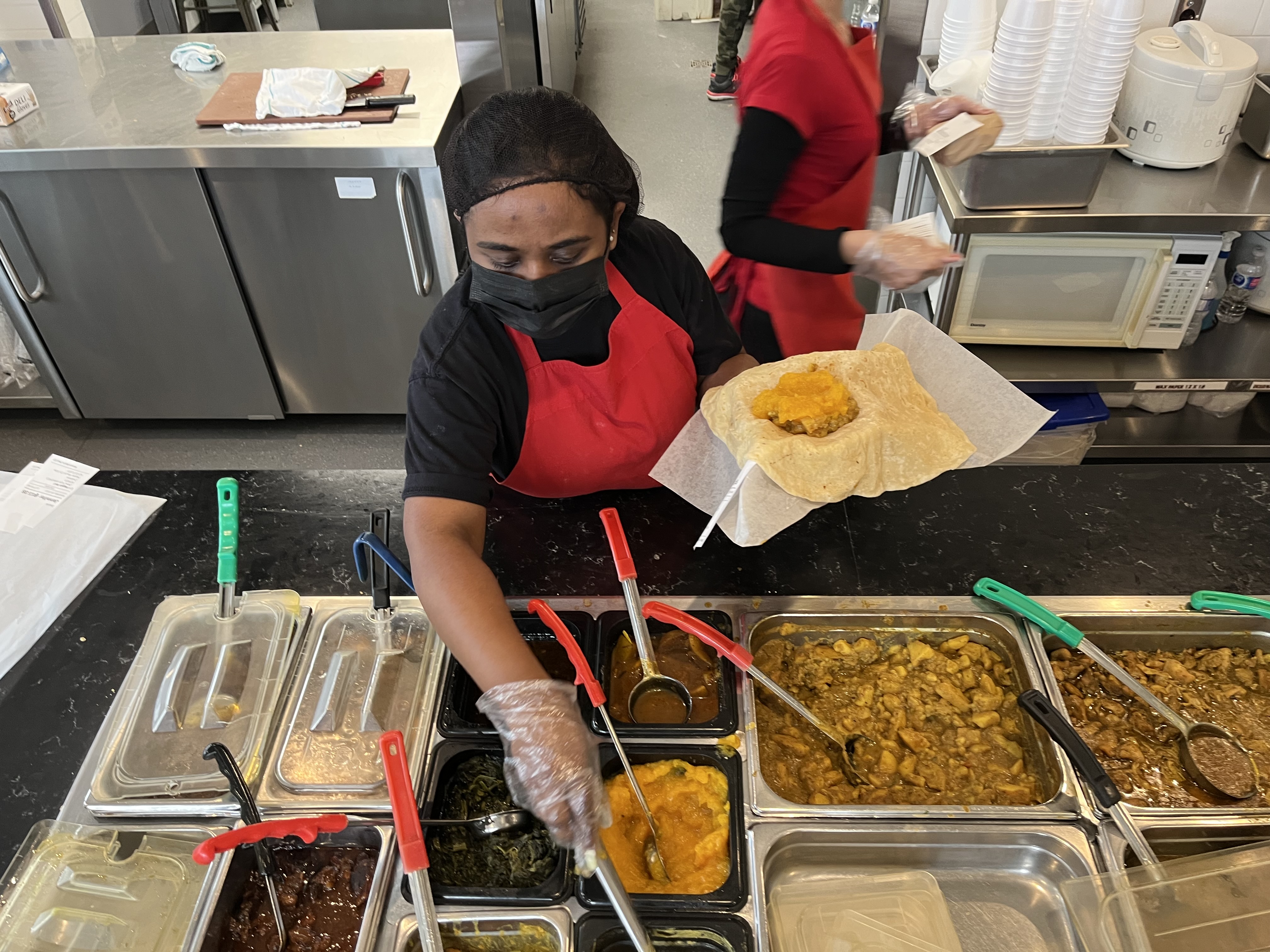 Go-to dish #1: Doubles
Tasting notes: I don’t know who needs to hear this, but never call it a “double.” You’ll get weird looks. Even if you’re ordering a single unit, it’s still called “a doubles.” In any case, I love them because I’m very much a snacker, and this is sort of a midday pick-me-up. I’ll order two, down one and save the other for later or bring it home to my wife and son. You may think that it’s a super sloppy item to eat in a car—and you’d be right. But, after my fair share of messes, I’ve mastered the art of eating this in a vehicle. The key is to peel the wax paper back as you eat, kind of like peeling a banana. And, while I love meat, there’s something so satisfying about the yellow fried flatbread, the curried chickpeas, the tang from the tamarind sauce and the bite from hot sauce. And don’t underestimate its size: it may look small—especially in terms of Scarborough portions—but it’s plenty filling. I give it 3/10 on the Scarborough spice scale. 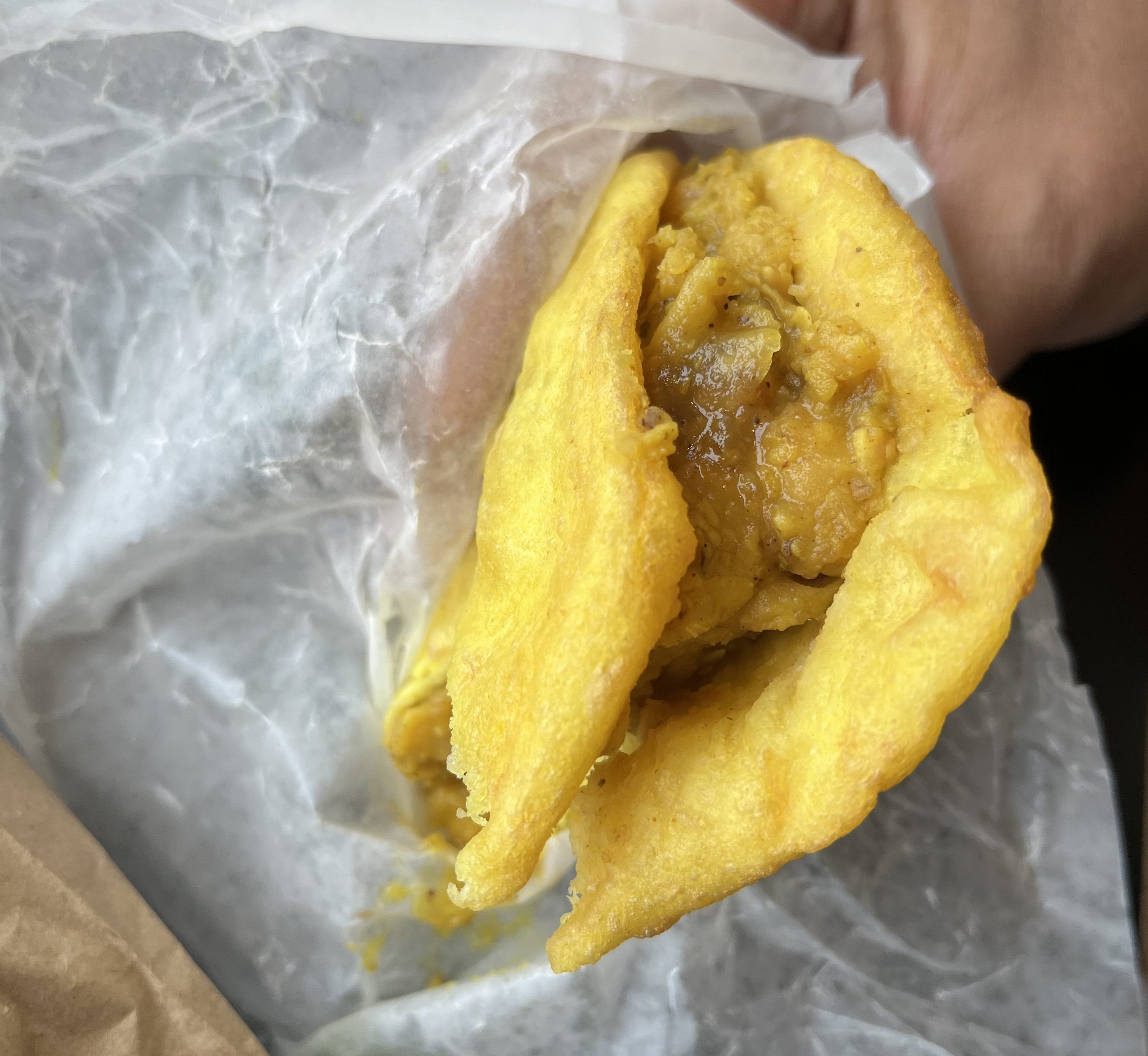 Go-to dish #2: Chicken roti with potato
Tasting notes: I love that you can see the fresh roti skins as they’re being made and then cooled with a fan in the kitchen. The filling is loaded up and then swaddled like a baby. And, honestly, I wish we had a scale here because this little beast must weigh at least five pounds. That’s how you know it’s going to be good—the weight! My Trini friends would roast me if I ate this the wrong way: you can only eat it whole, a bit like downing a burrito. Don’t even think about using a knife and fork. The first thing that hits is the soft bread, then come the nuggets of chicken and potato all suspended in this gravy—they ladle the perfect amount in, so it doesn’t drip all over you. I know it sounds clichéd, but you can taste the love in each bite. 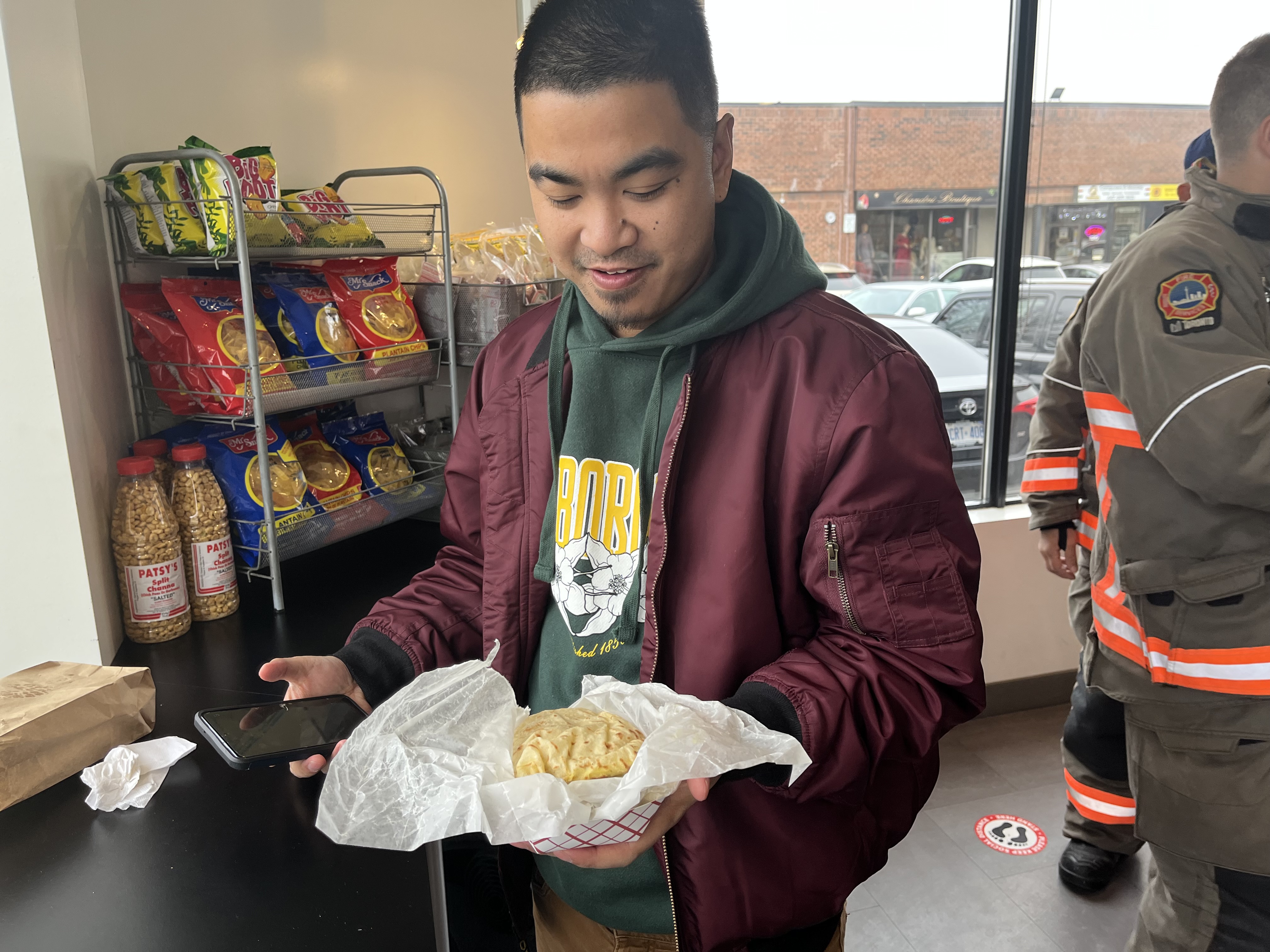 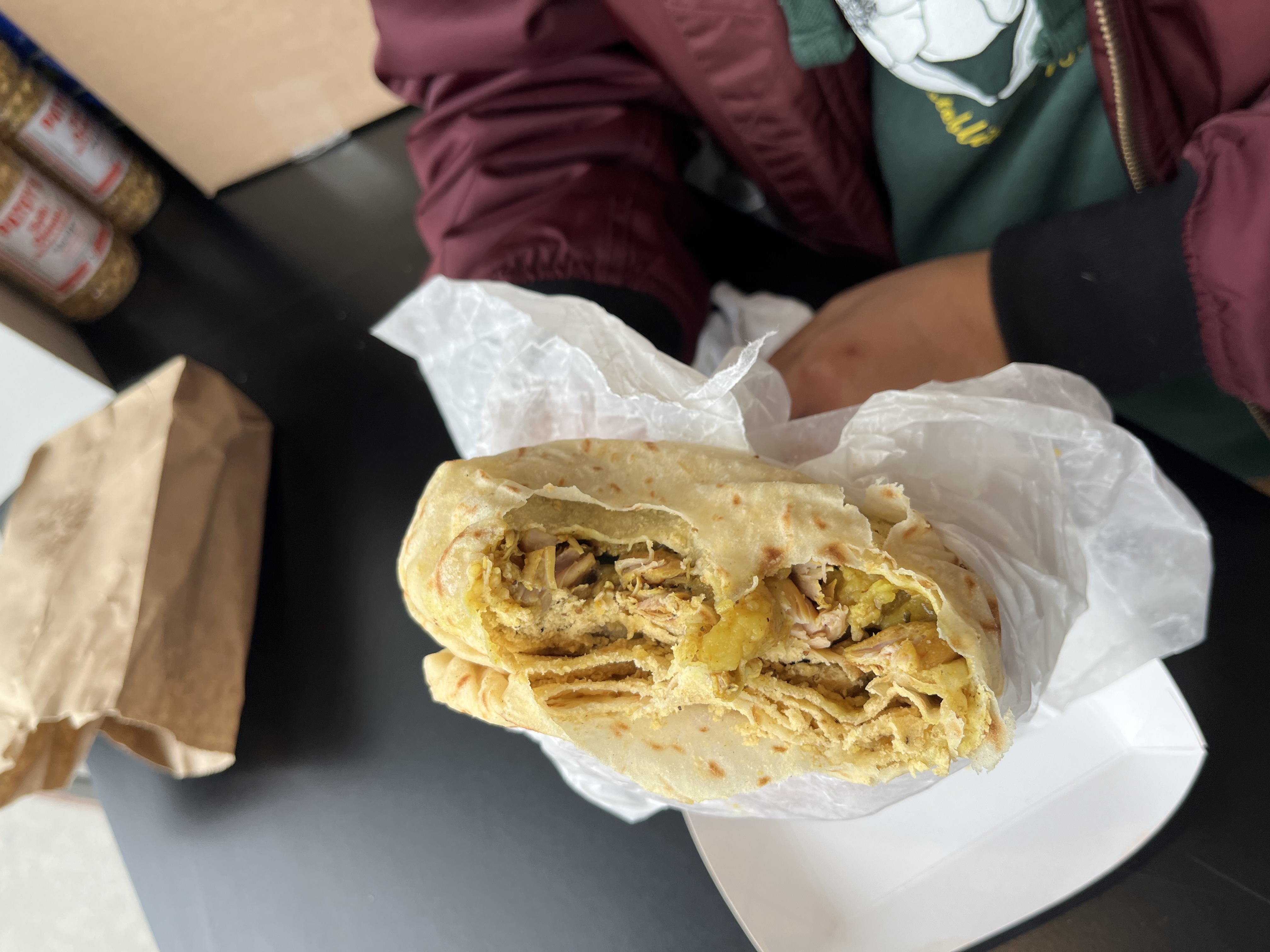 Gateway on the Go 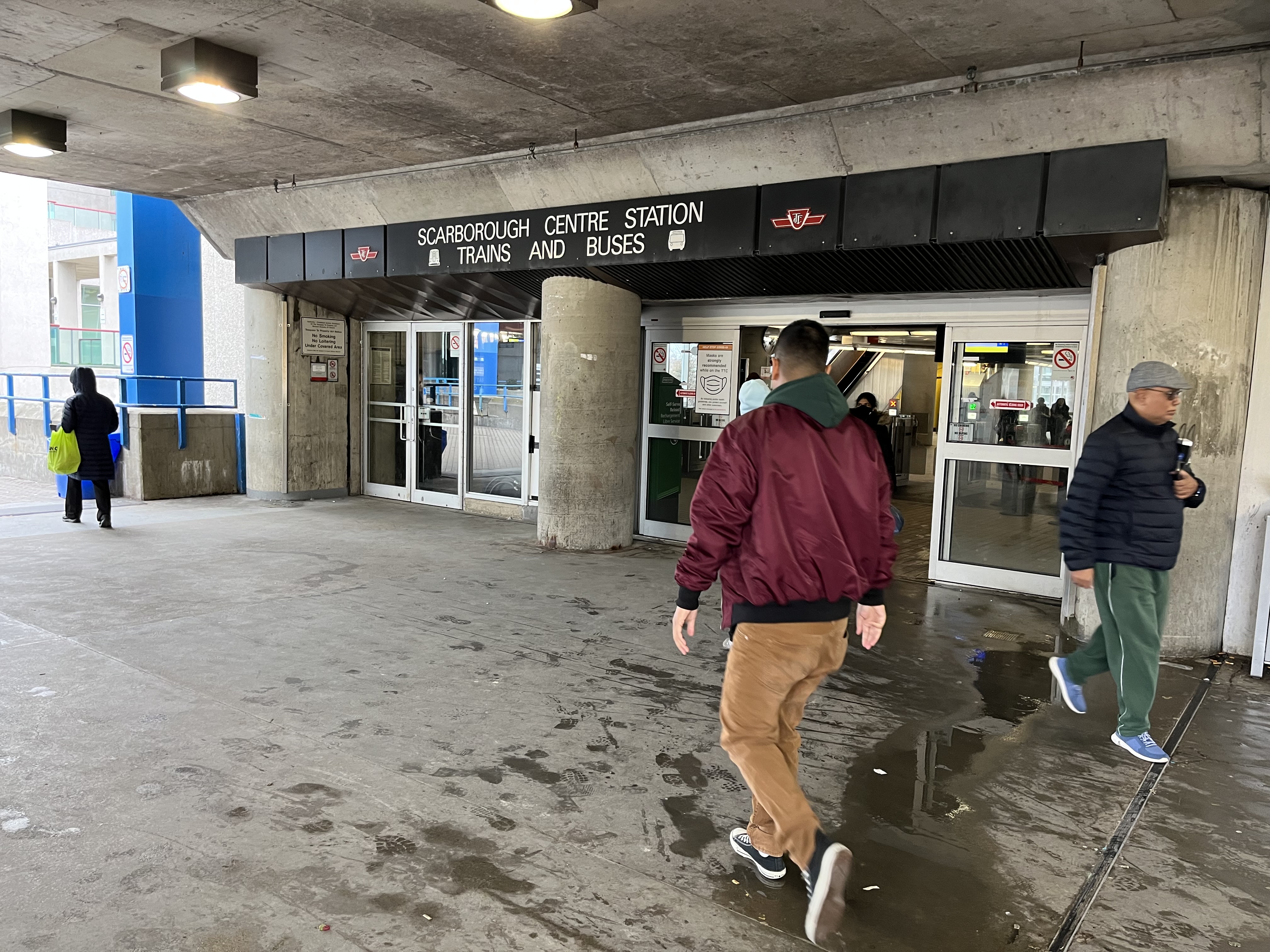 I must first say that my favourite patty is actually at Warden station. Unfortunately, the supplier, Fahmee Bakery, suffered a devastating fire and lost their Scarborough production facility. In their recovery efforts, they’ve currently hit pause on supplying Warden and Bathurst stations. So, for patty lovers needing their fix, my second-favourite patties are from this stand just outside of Scarborough Town Centre, inside the TTC station. 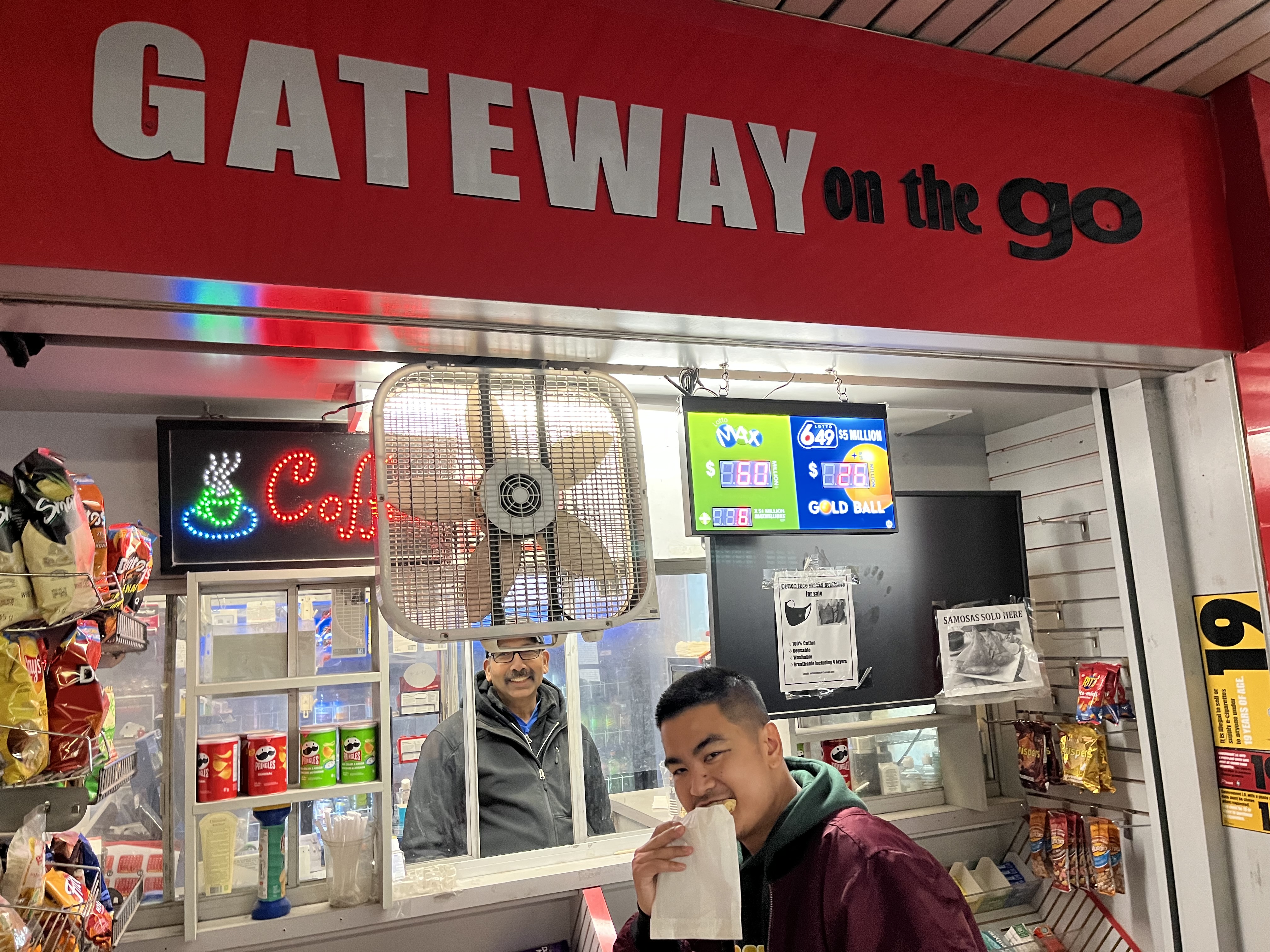 Go-to dish: Spicy patties
Tasting notes: I’ve been coming to Gateway on the Go since I was in Grade 6 and greeting the owner, Kris, every time. He’s been here for over 30 years, and he sources his patties from Allan’s Pastry Shop. As a kid waiting in the winter for the Nugget Bus—which ran every 20 minutes—I’d enjoy a hot and spicy patty to keep from freezing. It was a multipurpose snack: it was cheap and filling enough to tide me over until I got home—where my mom would be waiting with another snack—and it kept me warm! They taste just as good today as they did back then. The super flakey shell is jam packed with spicy minced beef, and the filling-to-pastry ratio is on point. 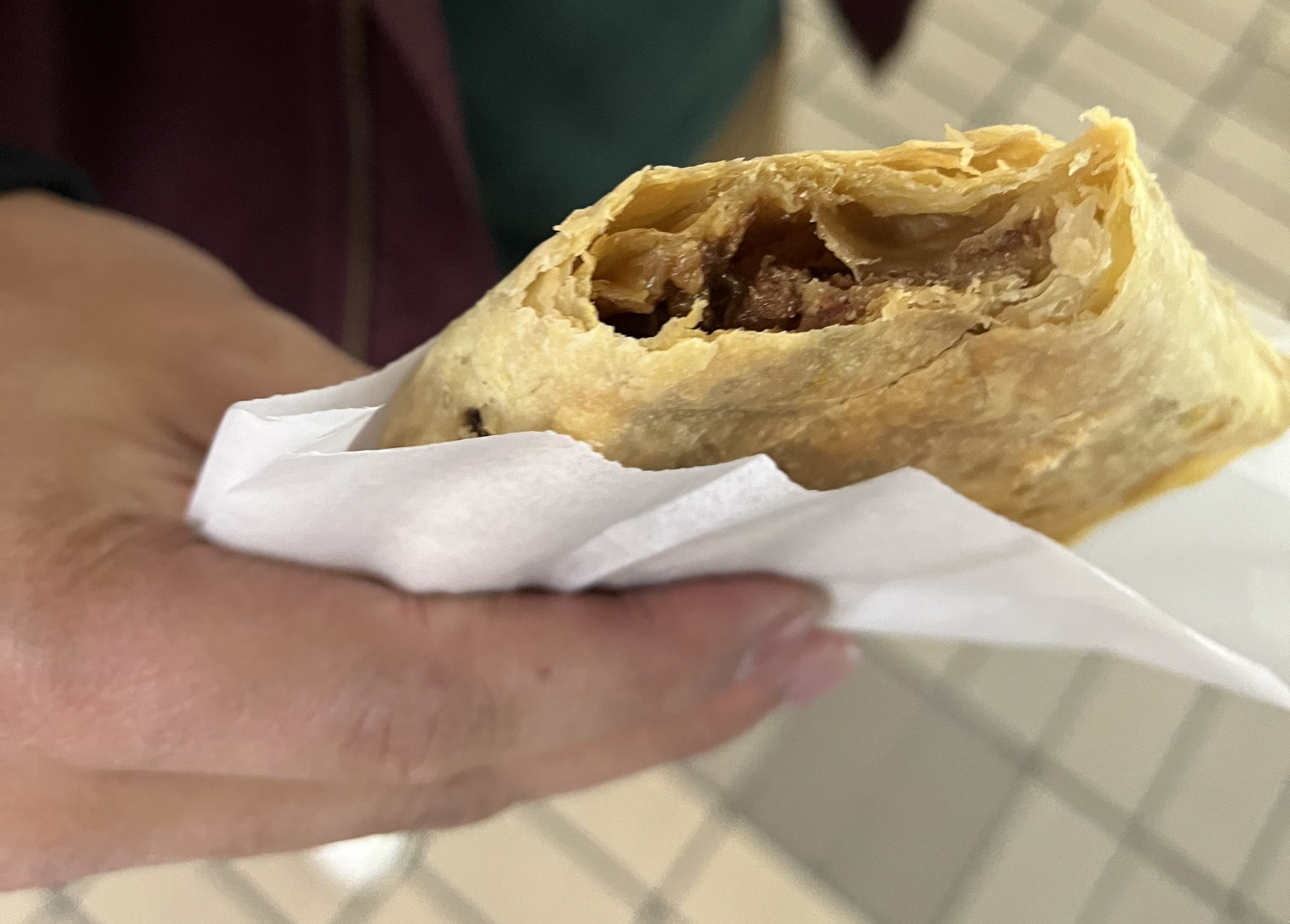 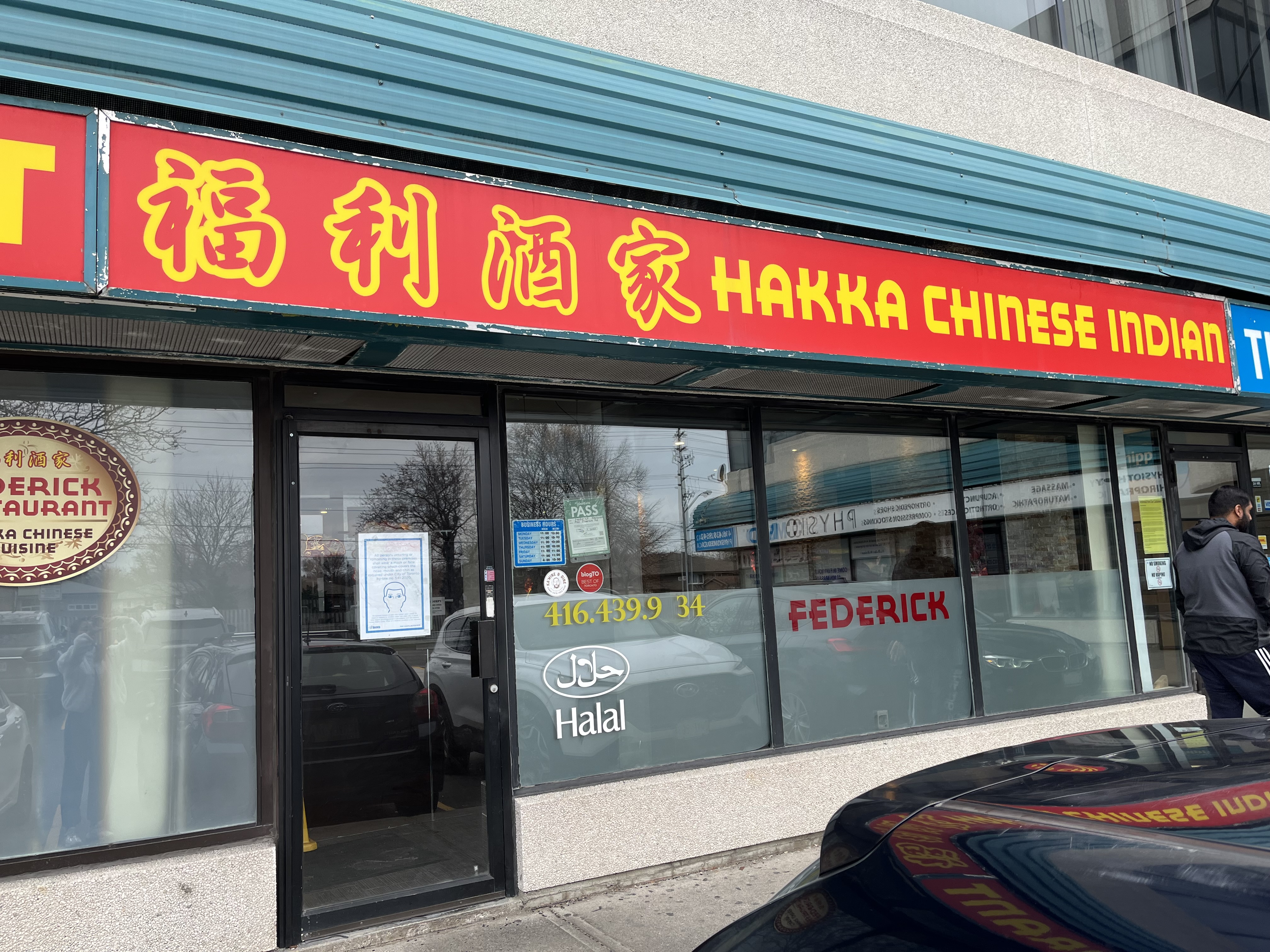 The first thing I have to note here is that it is called Federick Restaurant, not Frederick. There have been heated online debates over the mispronunciation of the restaurant’s name. It’s funny how some people still mess it up even though it’s a legacy restaurant in the neighbourhood. It’s been here since 1990, when chef-owner Simon Lee introduced Chinese Indian Hakka cuisine to the area. Today, they have two locations—the other is in Markham—and they’re both owned and operated by Simon’s daughter, Jennifer Lee. She’s incredibly supportive of our community, whether that means letting us film our silly food skits in her restaurant or collaborating on a T-shirt collection. 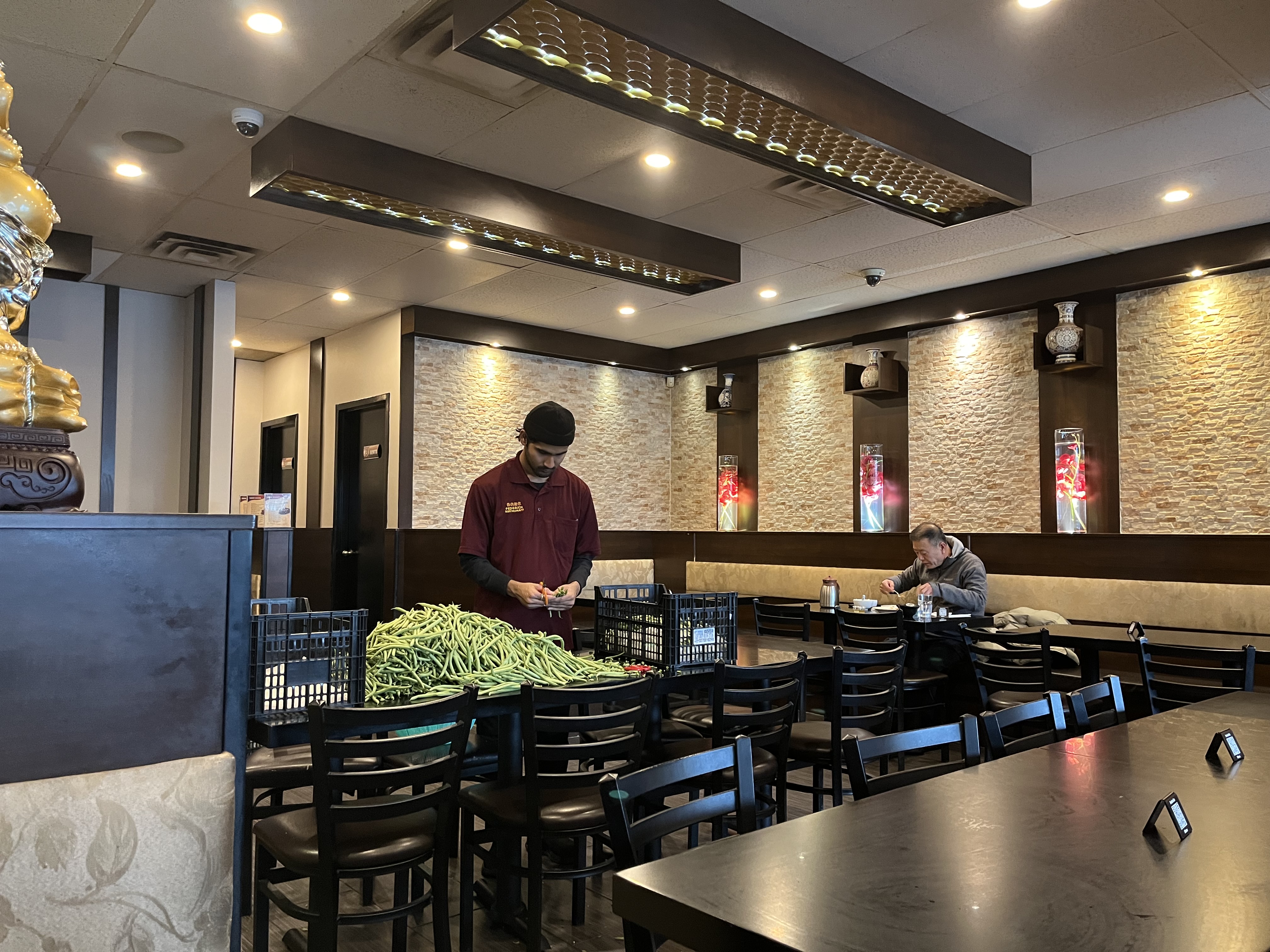 Go-to dish #1: Garlic shrimp
Tasting notes: Who doesn’t love a sizzling platter of food? The redness of this plate may look intimidating, but in terms of the Scarborough spice scale, it actually rates around 4/10. There’s a lot of spice but not really heat, if that makes sense. What I do is make a bird’s nest of white rice, then pile on loads of plump shrimp, then ladle on some sauce and tuck in. It’s just so comforting and good. It reminds me of my mom’s home cooking. 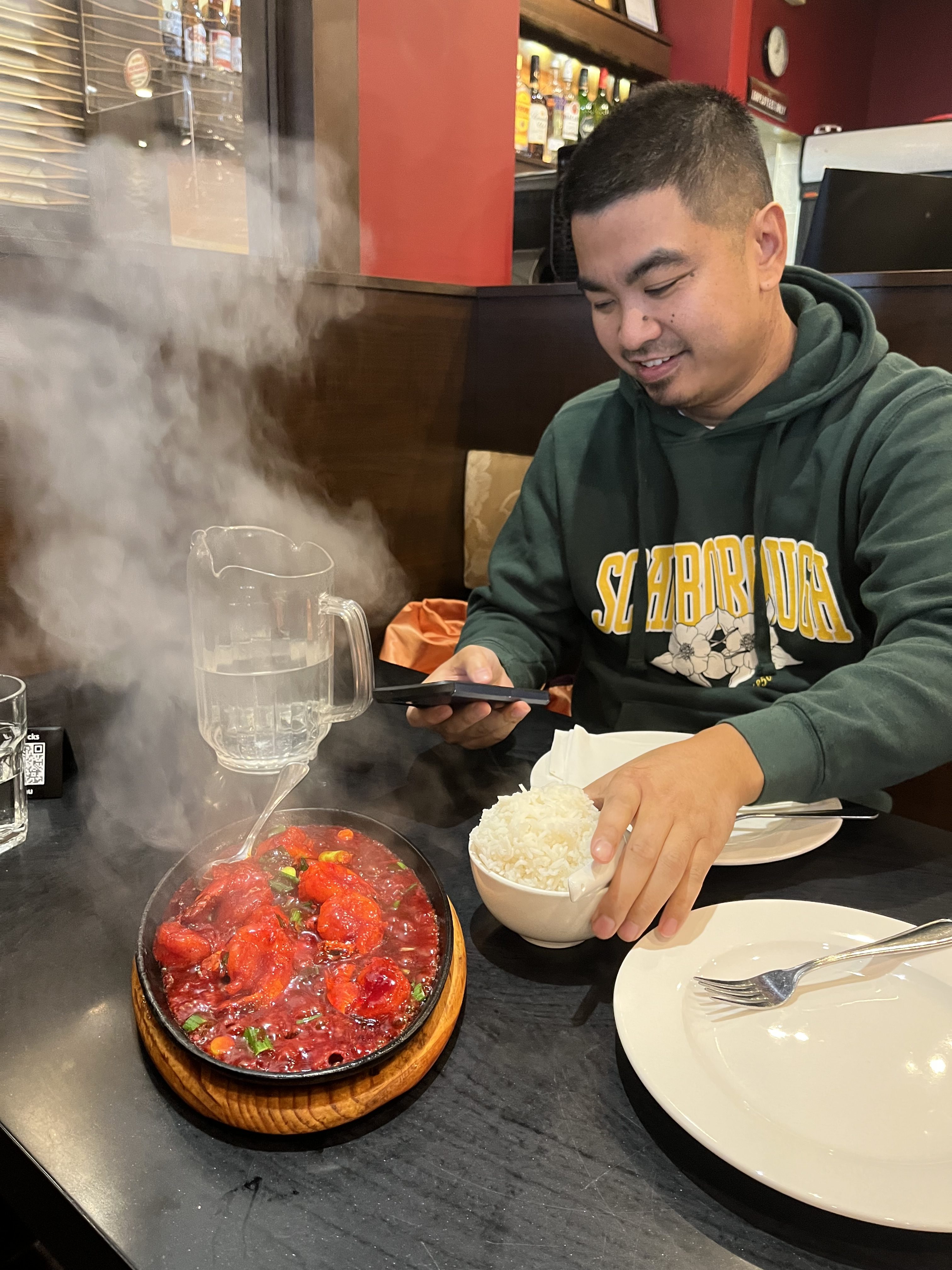 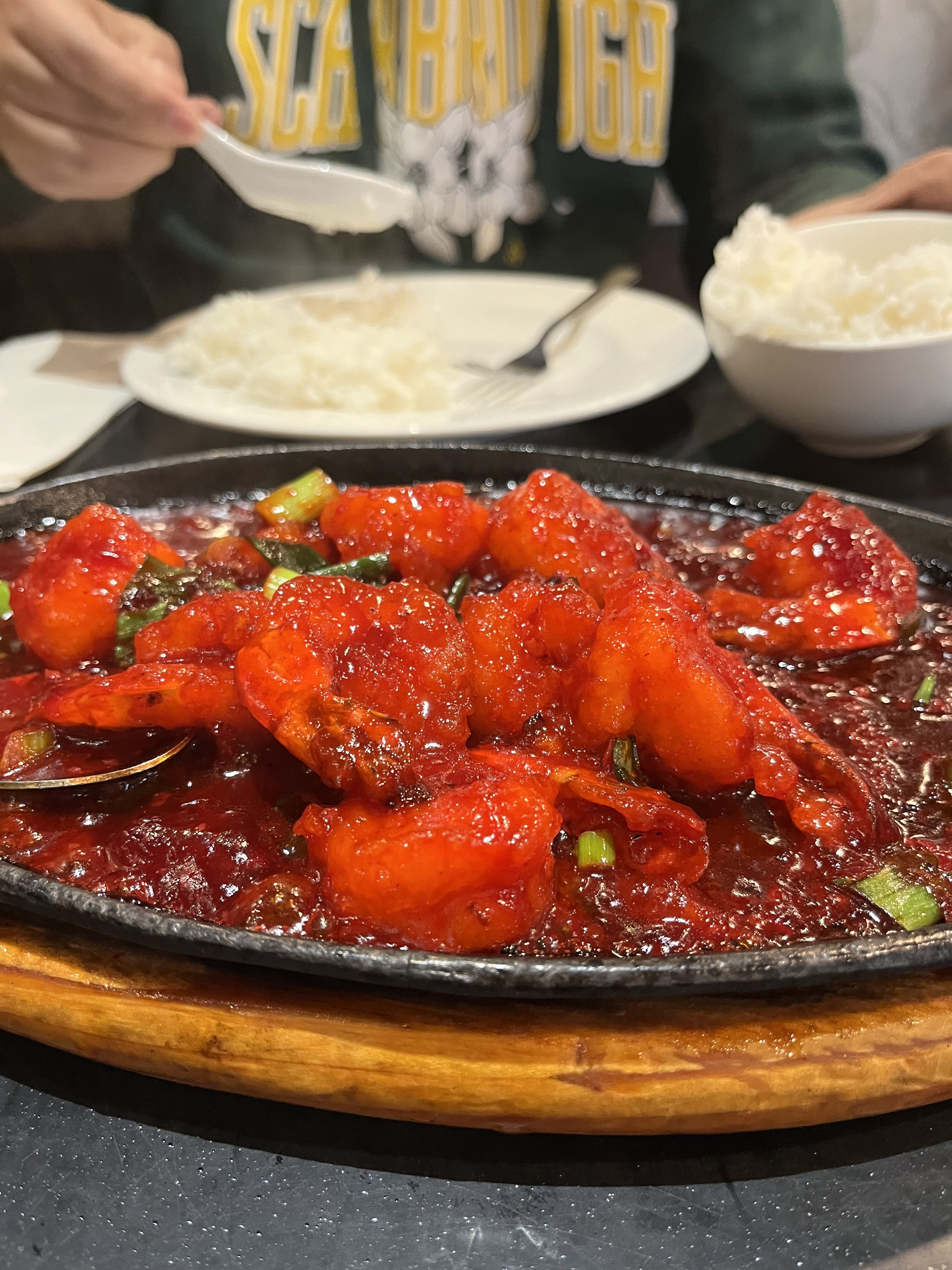 Go-to dish #2: Chicken pakoras
Tasting notes: During the holidays, I’m known as the pakora guy because I bring a huge tray to every party I attend with my wife and son. It’s just my way of properly repping Scarborough and bringing its flavours to relatives and friends who don’t live here—I bring the heat. Speaking of heat, these hit around 8/10. And these fried chicken fritters get hotter the more you eat—think of these as Scarborough’s Hot Ones. You can see the chili flakes on the breading, and the heat lingers on your tongue and at the back of your throat, so they’re not for the faint of heart. The restaurant knows this, and they have large pitchers of water on hand for those who need salvation. As for the chicken itself, it’s super tender dark meat. 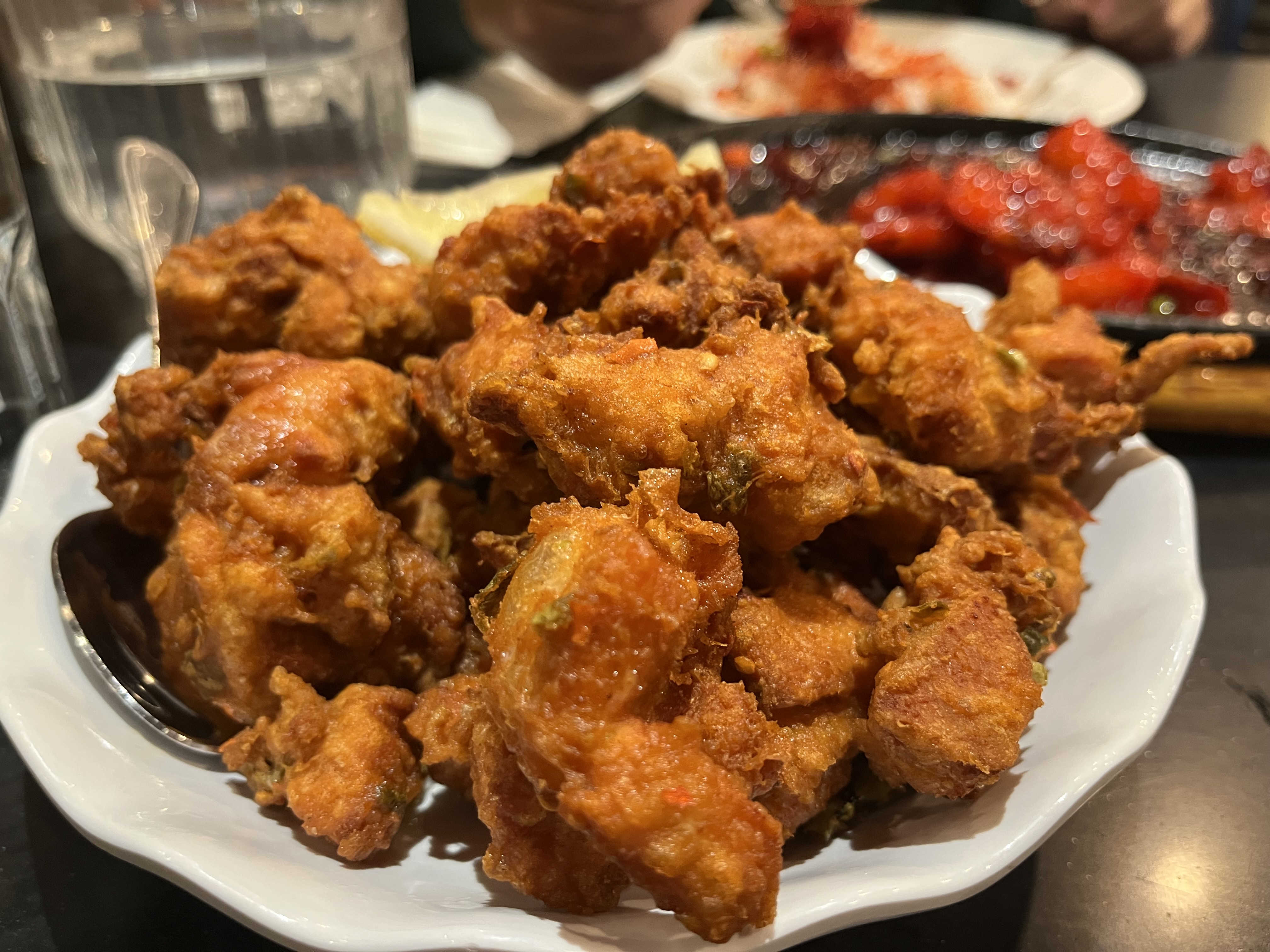 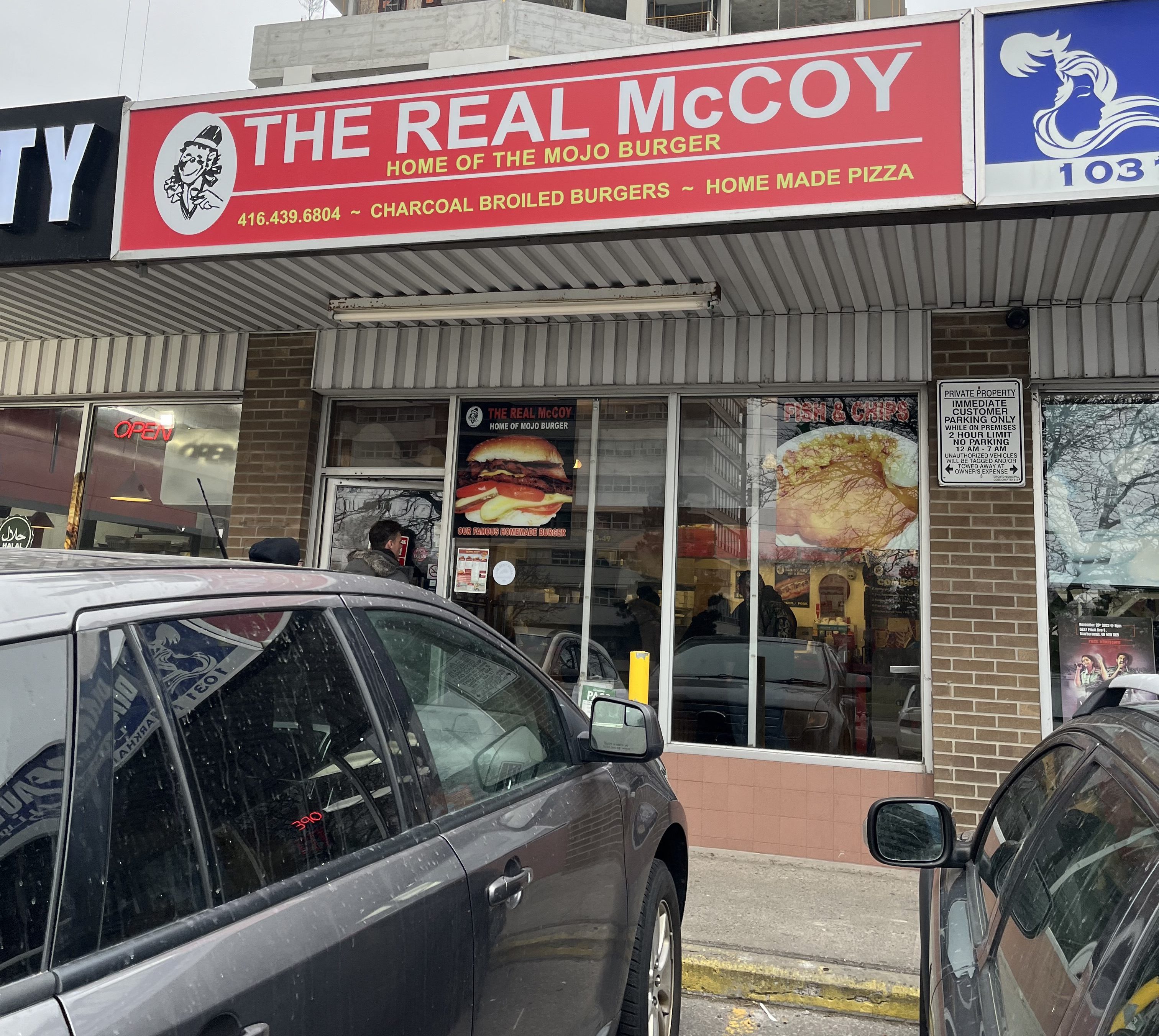 This legendary spot has been open since 1969. Devastatingly, they’re closing—December 24 will be their last day. The entire plaza will be bulldozed to make way for condos. Right now, owner George Mihail—who knows all of his regulars by name and order—is taking it day by day and thinking about where to open a new location. But I’ll miss the OG spot. You can’t find places like this anymore; walking through the door is like stepping into a time machine. George is such a nice guy and is incredibly devoted to supporting his community: he fed people for free during the great power outage of 2014, and he donates to little league hockey teams nearby. The Barenaked Ladies even filmed one of their videos here. There are countless memories within these walls. 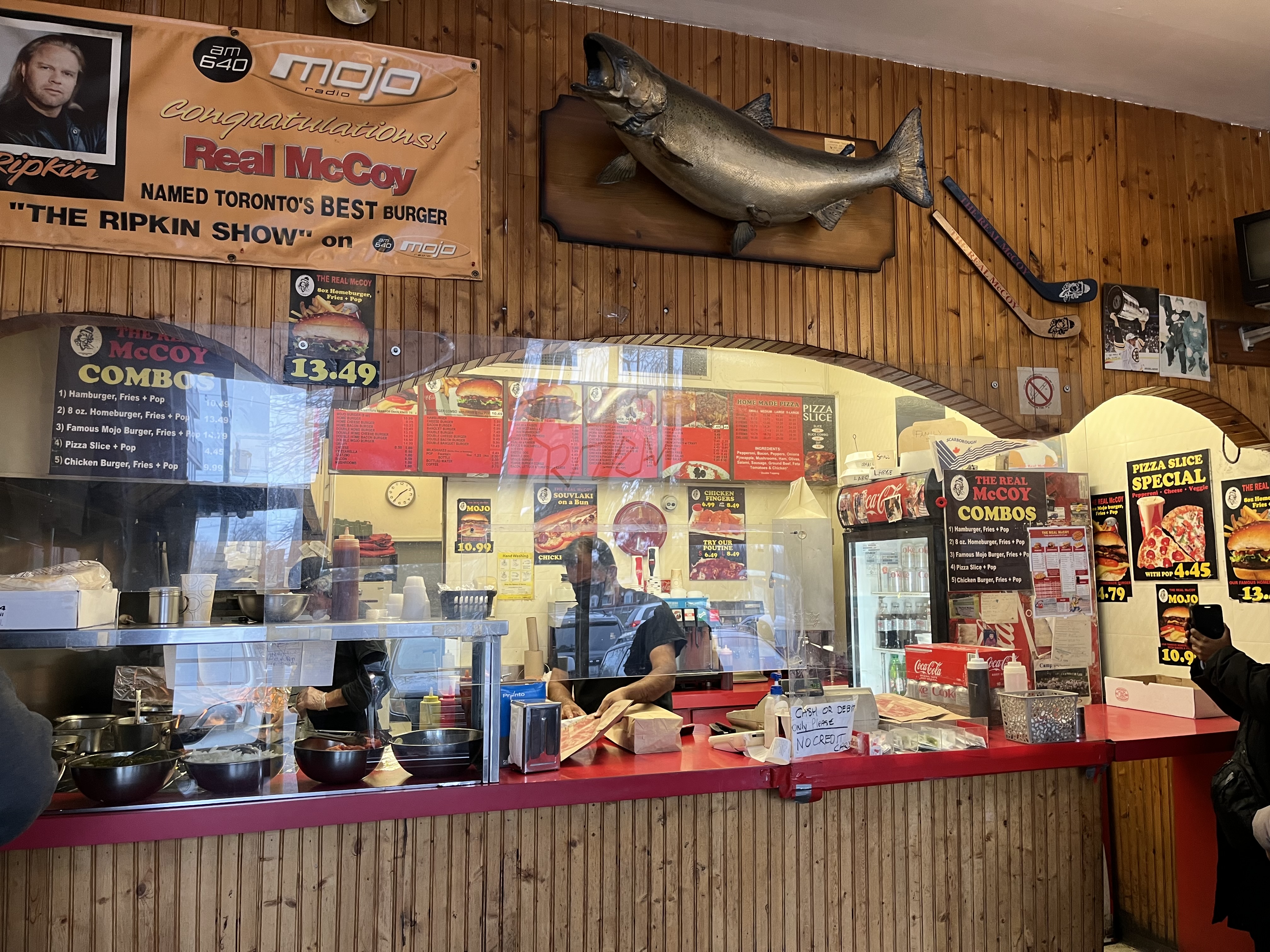 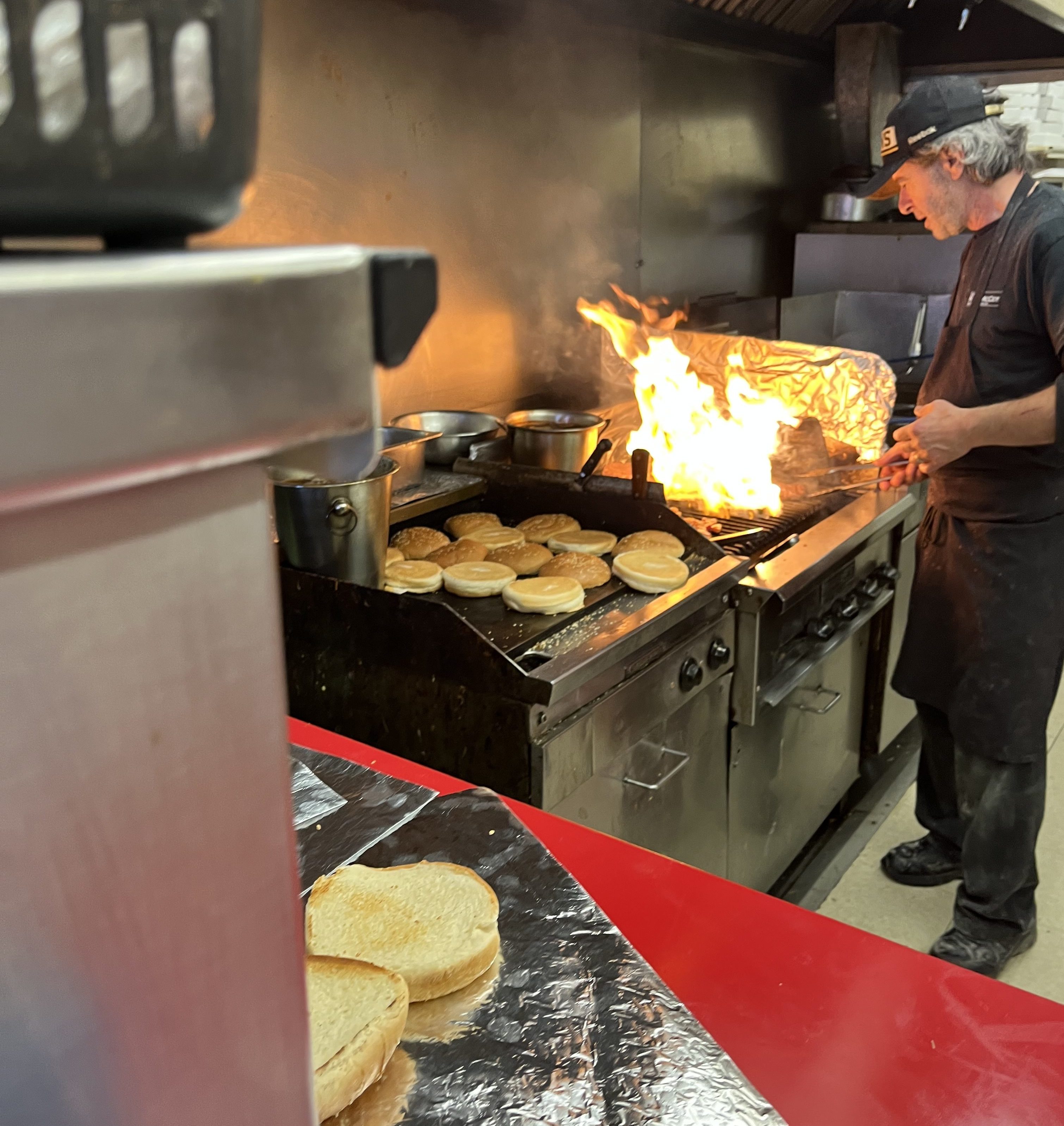 Go-to dish #1: Mojo Burger with a side of onion rings and fries
Tasting notes: Initially, I thought Mojo had something to do with Austin Powers because Mike Myers is from Scarborough. But, according to George, there used to be something called Mojo Radio, and they held a pretty epic burger contest. The Real McCoy won it with this burger, which they then named after the station. The Real McCoy was always open late, so as teens, my friends and I would hit this place up at night, order a round of burgers and eat in the parking lot while shooting the shit. It was just a fun and carefree time. So this burger is nostalgic for me—it tastes like high school. It’s flame grilled, so you can taste the char, and it comes with cheese and bacon. I always ask for “the works,” which means lettuce, tomatoes, pickles, onion, relish and mustard. It all helps to balance the richness of the patty. Pro tip: the Mojo is great on its own, but if you want to take it to the next level, shove a couple of onion rings inside and go to town. You may need to unhinge your jaw before taking a bite, but it’s worth it. 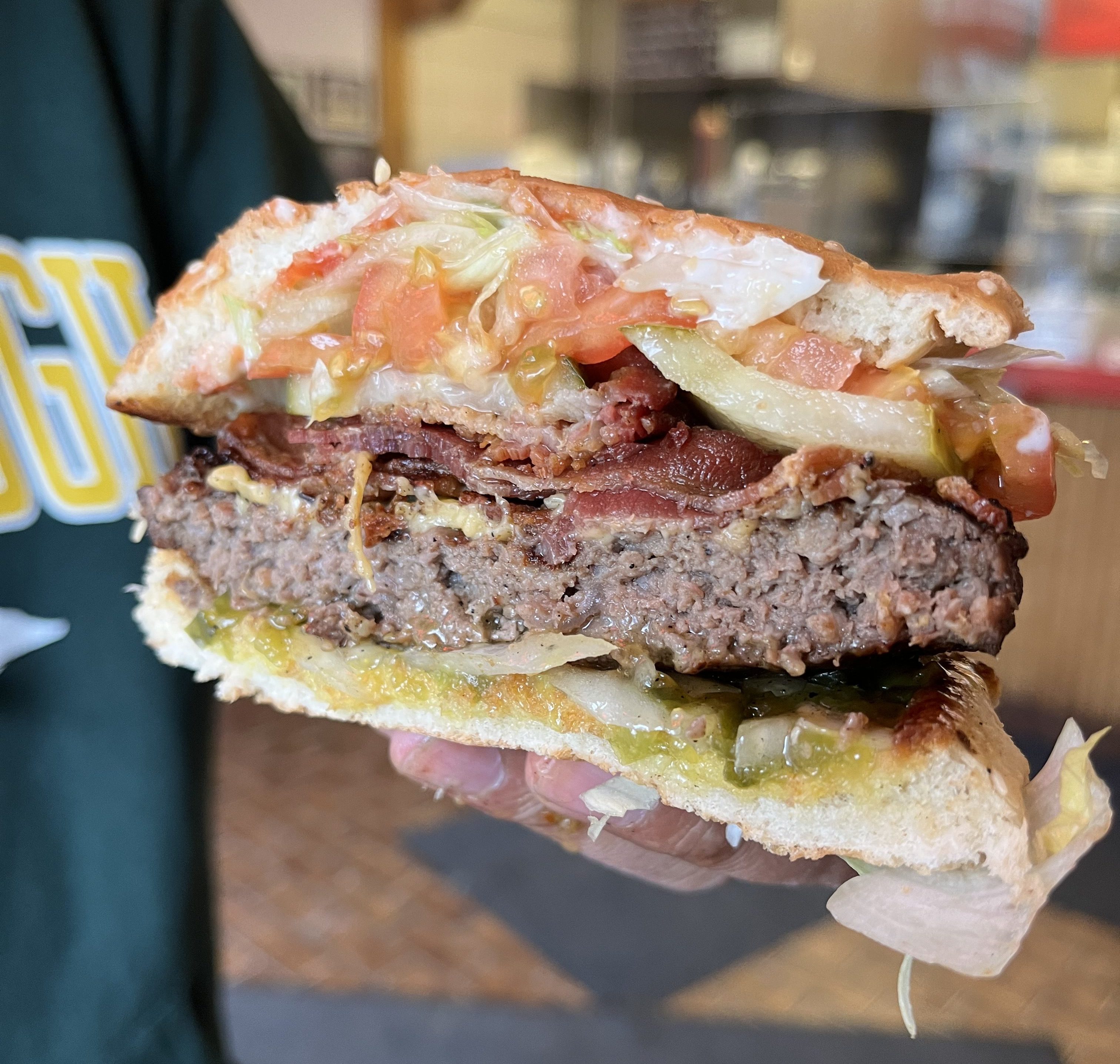 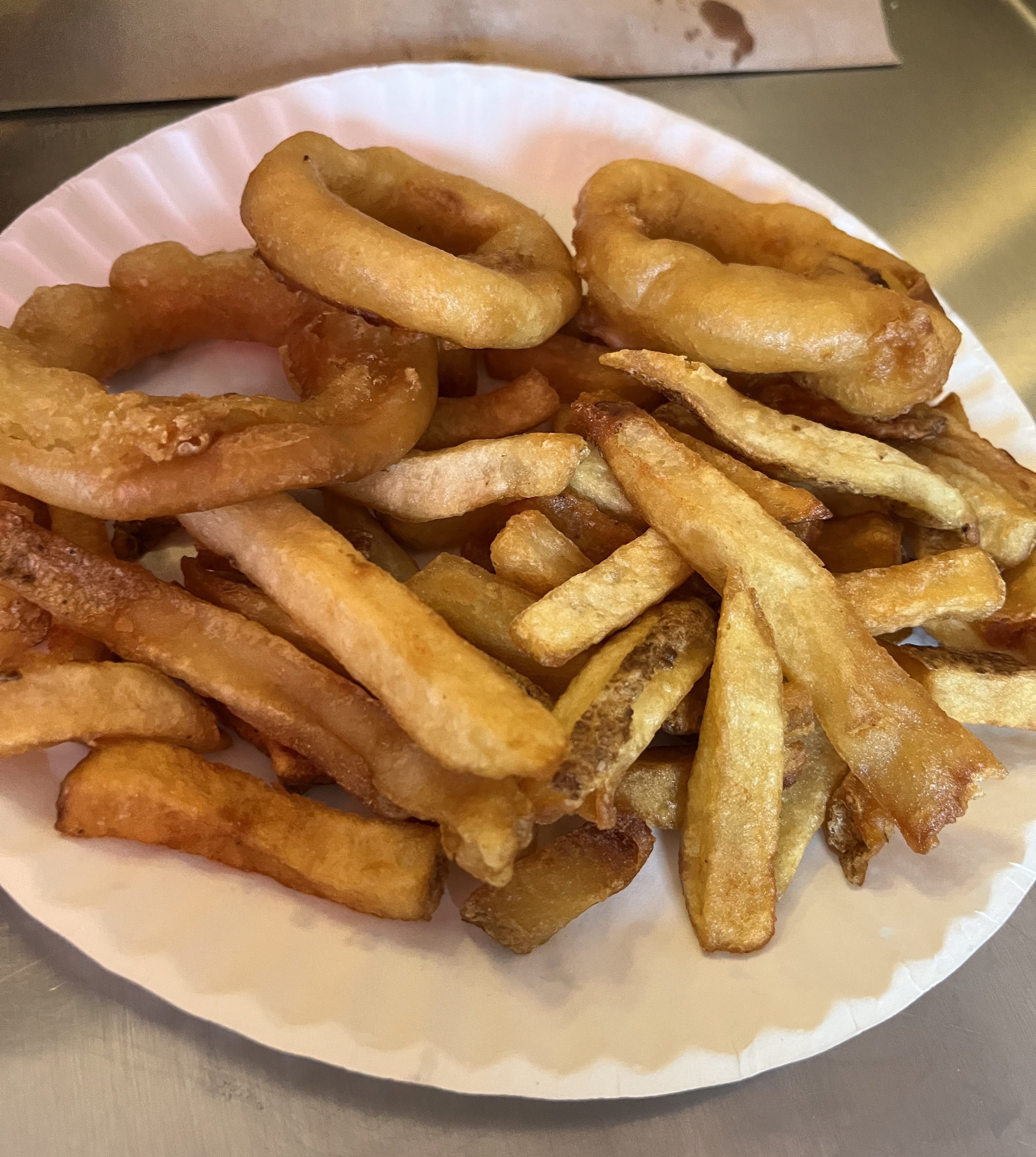 Go-to dish #2: Pepperoni pizza slice
Tasting notes: You know it’s gonna be good when the grease creates windows through the wrapping—grease is gold. This is another nostalgic dish that brings me back to high school. It was always so affordable and really satiated my hunger after a day of school. Even as an adult, the size of one slice is incredibly satisfying. And, while I usually prefer the pepperoni on top of the cheese, here I make an exception. My strategy for tackling this is the sandwich fold—it’s the best way to minimize mess in the car. 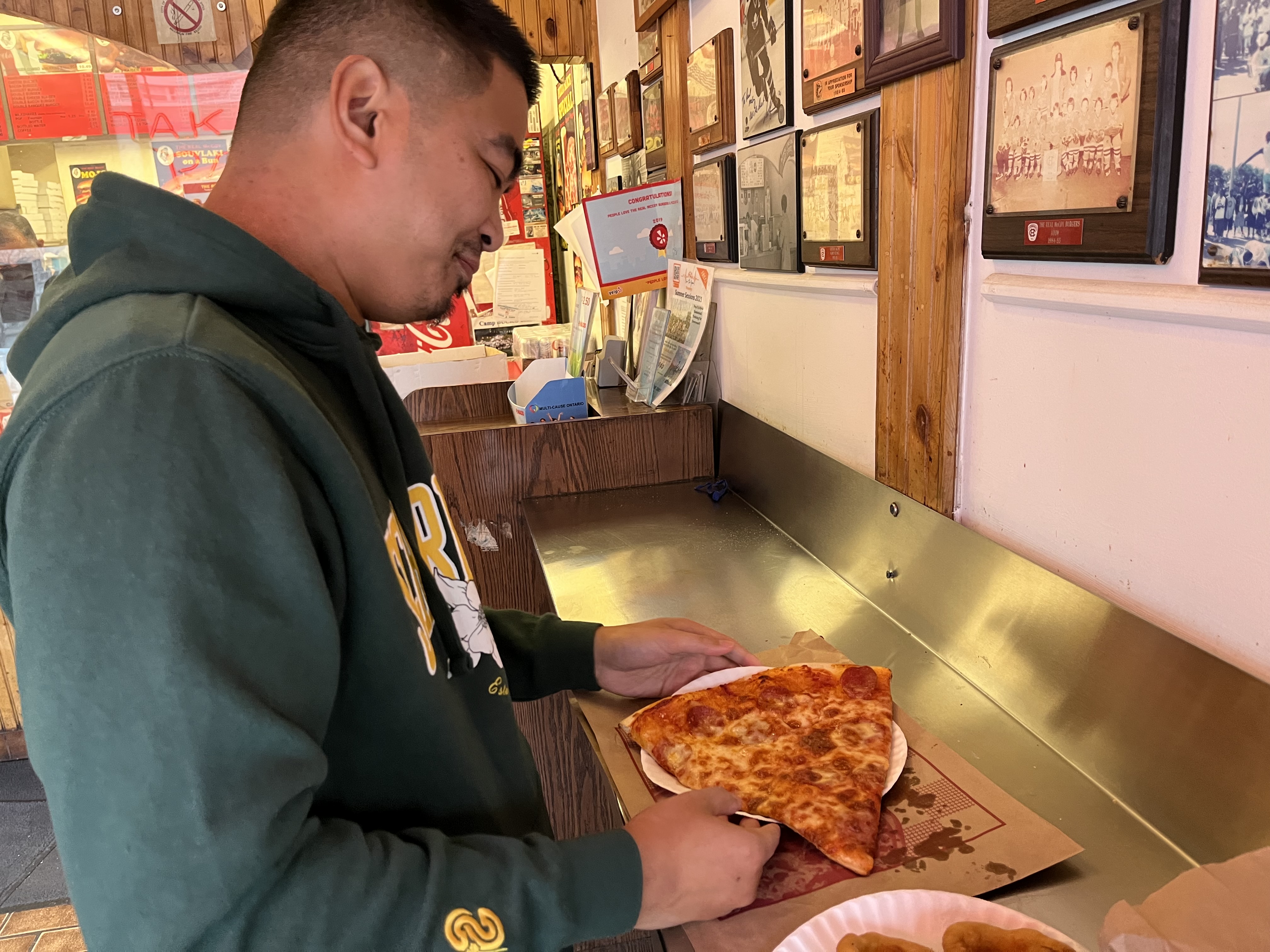 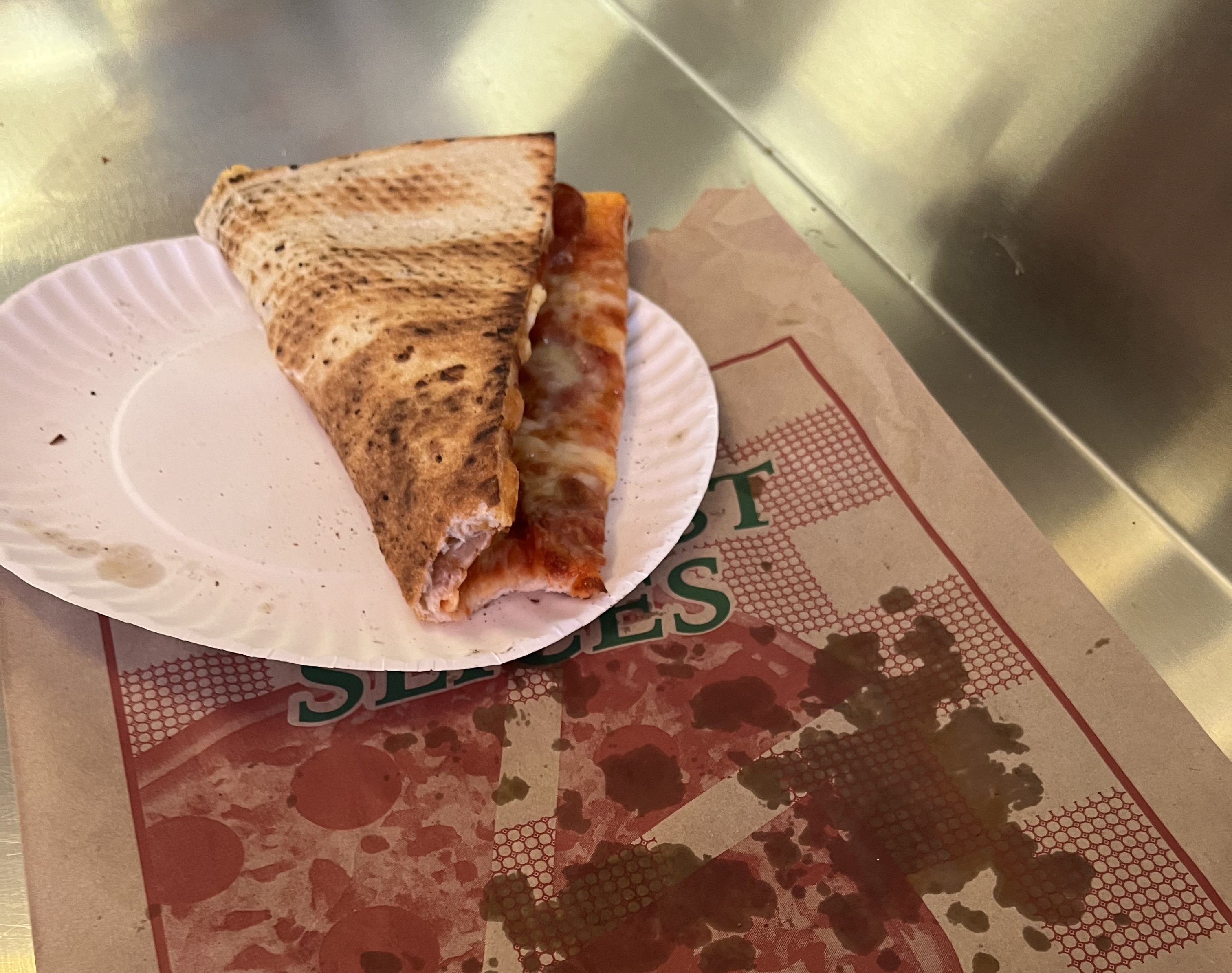