Everybody’s favourite uncle has opened yet another café and bakery in what is quickly becoming the core’s unofficial Little Japan. Uncle Tetsu’s Angel Café specializes in the brand’s “hat series” of cheesecakes—dome-shaped cakes in original, matcha, strawberry and chocolate flavours—and lunar cheesecakes, which are no-bake versions of the dessert (they’re named after the moon because there’s no heat involved). The new, two-storey location has three kitchens, plenty of seating and something else you won’t find at the original store or the matcha café: servers dressed in French-maid costumes. (The maid café is a Japanese concept originally created to target fans of animé and manga.) A stage will host live performances three times a week, so guests can look forward to a side of J-pop with their sweets.

Clockwise from top right: original, matcha and chocolate cheesecakes from the “hat series.”

A slice of strawberry (also from the hat series).

A server waits to greet guests. 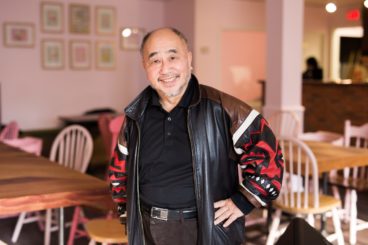 The lineup on opening night.