Five and a half years ago, David Chang’s 22-seat restaurant-within-a-restaurant, opened to rave reviews for its take on the tasting menu. Shōtō loosened the belt on fine dining, and became one of few restaurants in Toronto that stuck to the ethos of creating a seasonal tasting menu made with Ontario ingredients. But it, along with sister spot Daishō, will close on February 25. Both venues will undergo renovations and reopen as one restaurant with a whole new concept later this spring. Chef de cuisine Jed Smith has been with the company since the beginning. He was transplanted from NYC’s Momofuku Ssäm Bar, where he first started cooking in 2010. This weekend, the 31-year old will serve his final tasting menu. “It’s been quite a journey being in this space for five and a half years—this is my swan song,” says Smith. “I’m going to miss it, but I’m also looking forward to something new.”

Momofuku is keeping fairly tight-lipped about the new concept, but has announced that chef Paula Navarrete, a Momofuku team member since opening day, will spearhead the project. We’re guessing that the new restaurant will be similar to Momofuku Majordomo, which recently opened in Los Angeles, with a menu still influenced by Momofuku’s signature Asian flavours, but with a dose of Navarrete’s Colombian roots. “The new restaurant will highlight the ingredients I love, with a menu inspired by my background and that of my team, in an inviting new space,” Navarrete says. Here’s a look at what Smith served for his third-last dinner service at Shōtō. 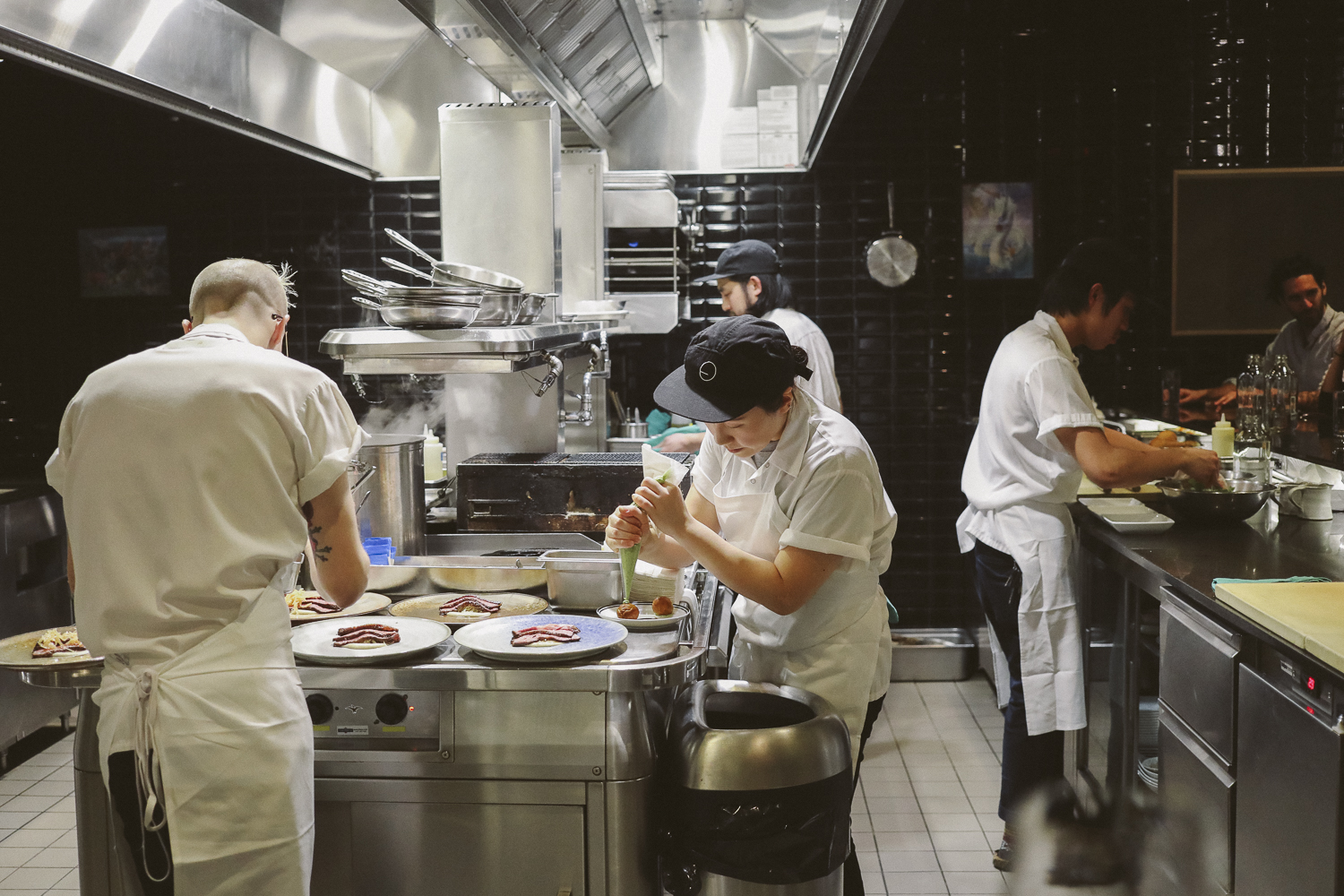 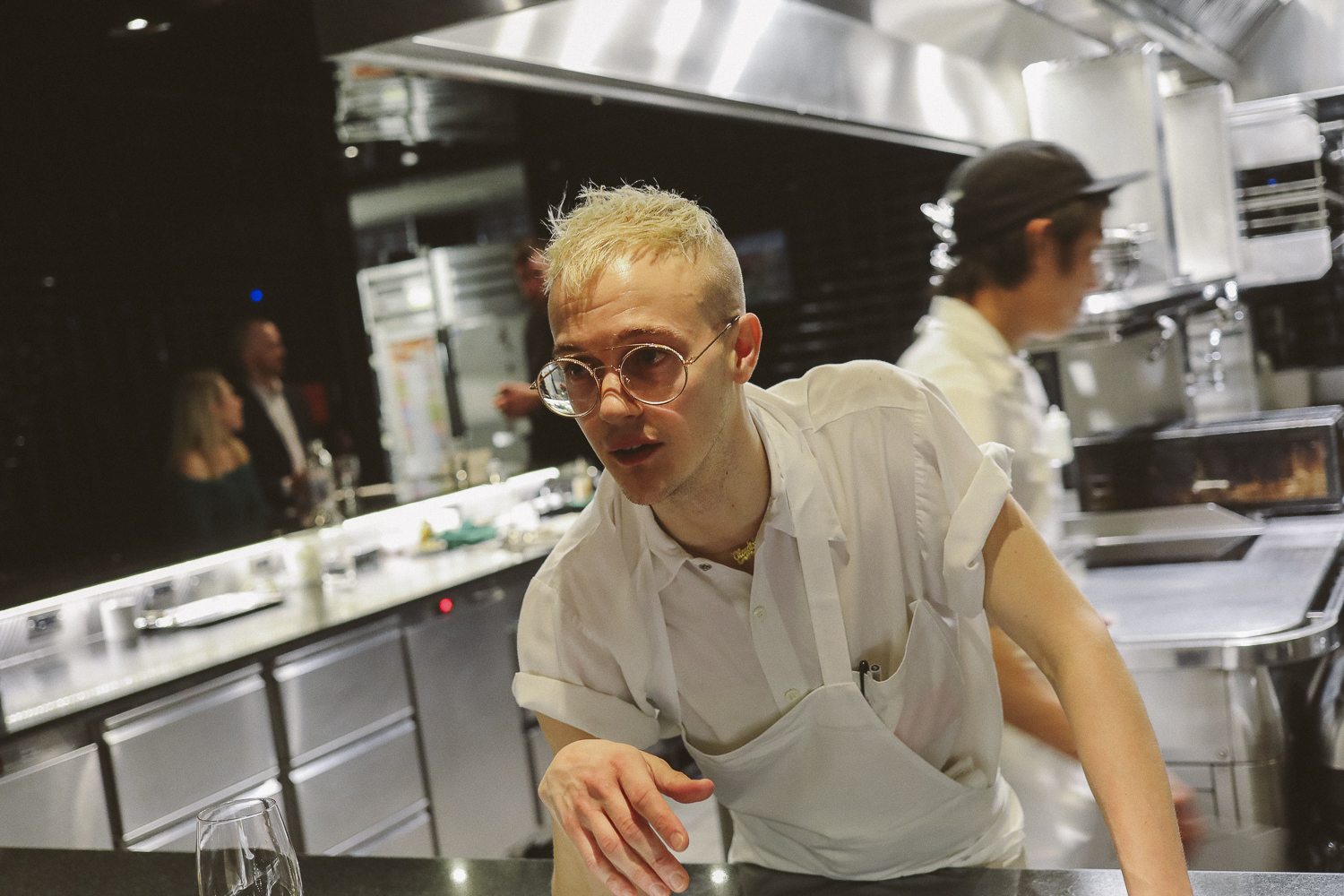 Dinner started off with a series of snacks, the first being this spicy pickled mussel served in a warm broth with pea shoots, green chilies and fennel: 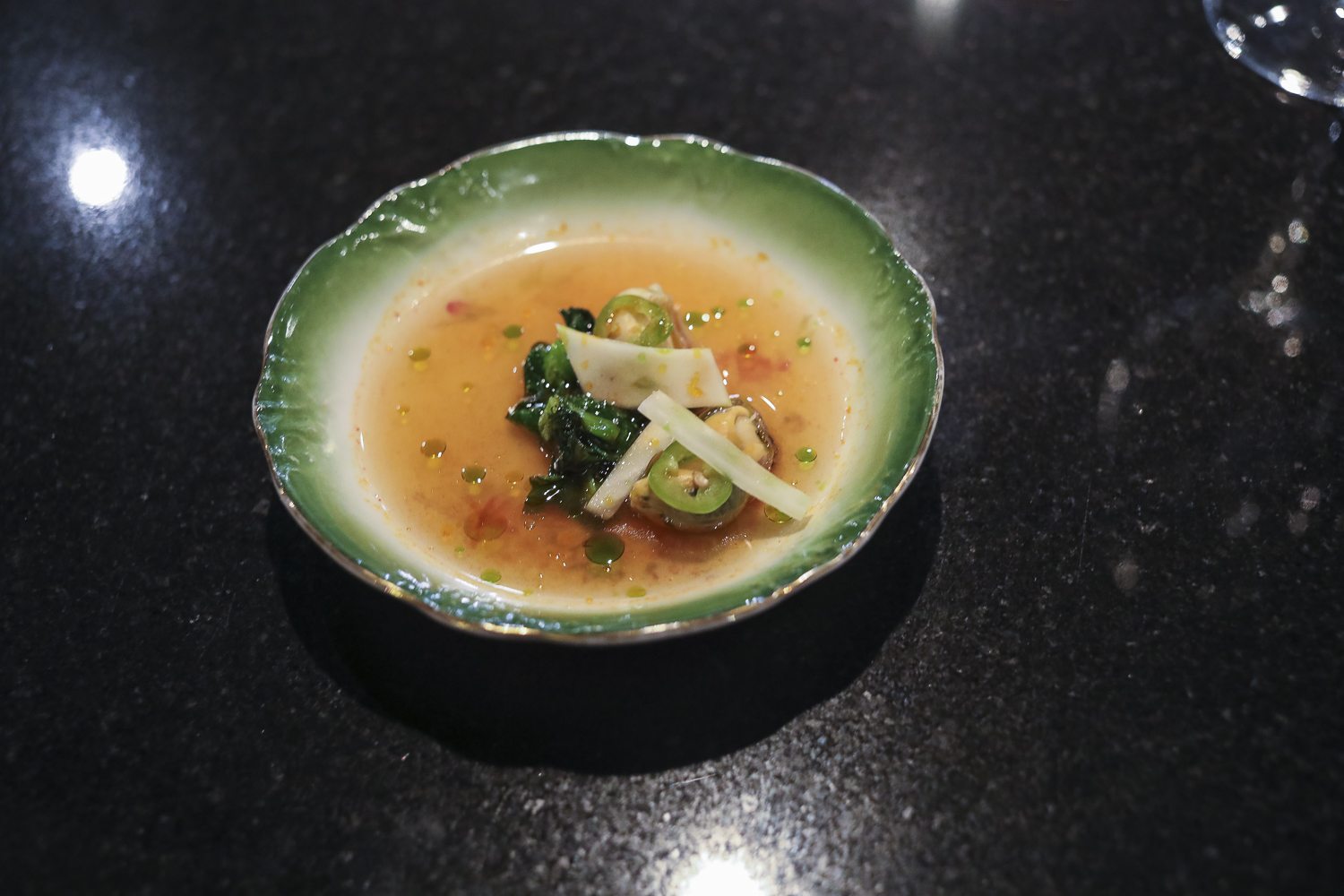 Next up was the “Coronation Chicken Ball,” smoked chicken coated in a pancake mix and cooked in a takoyaki pan. It was served with a dollop of cilantro mayo: 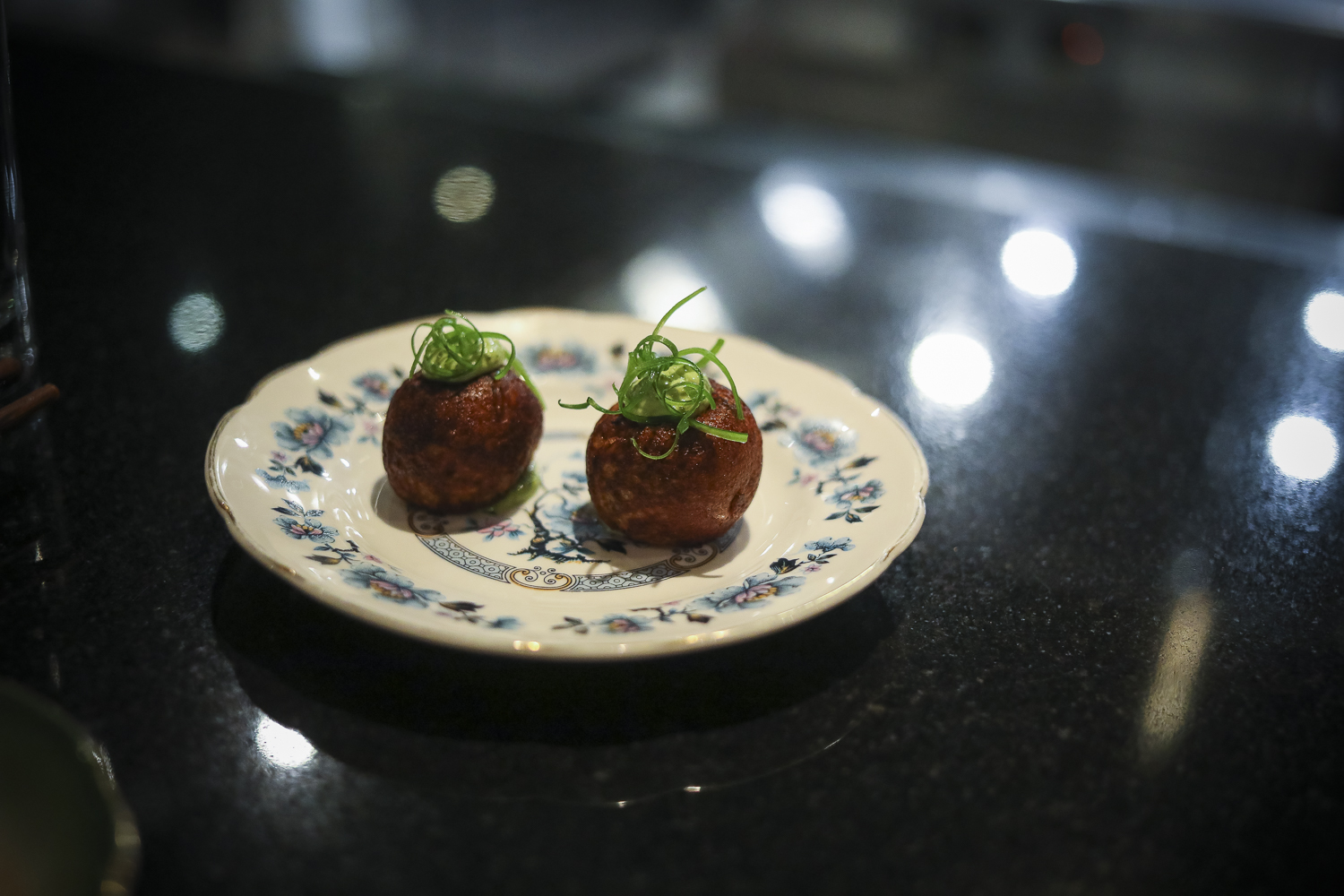 The third and final amuse bouche was a lamb sausage roll with sweet miso mustard: 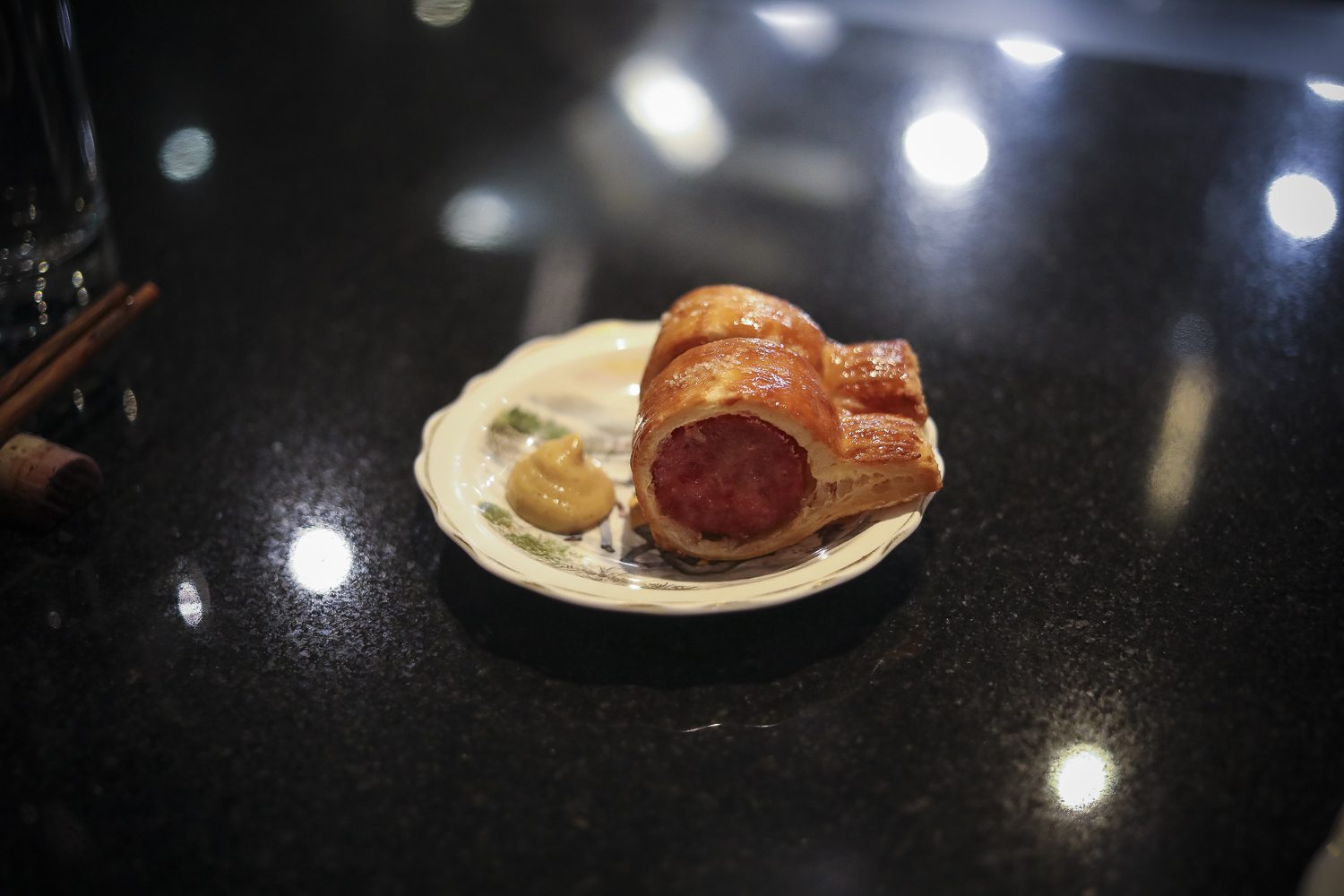 First course: Diver scallops with seaweed, roasted maitake mushrooms and kohlrabi, in a brown butter sauce with a maple vinaigrette: 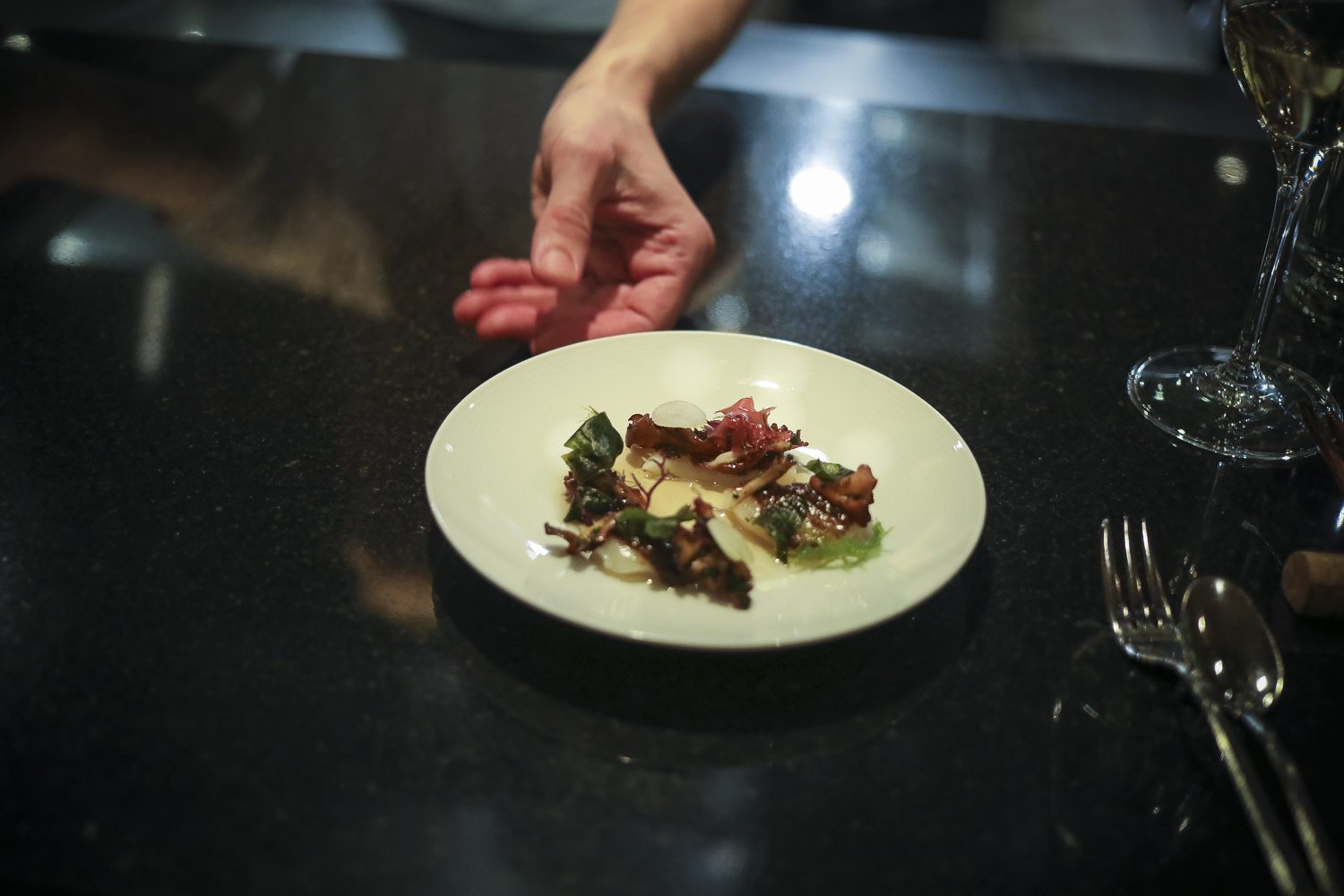 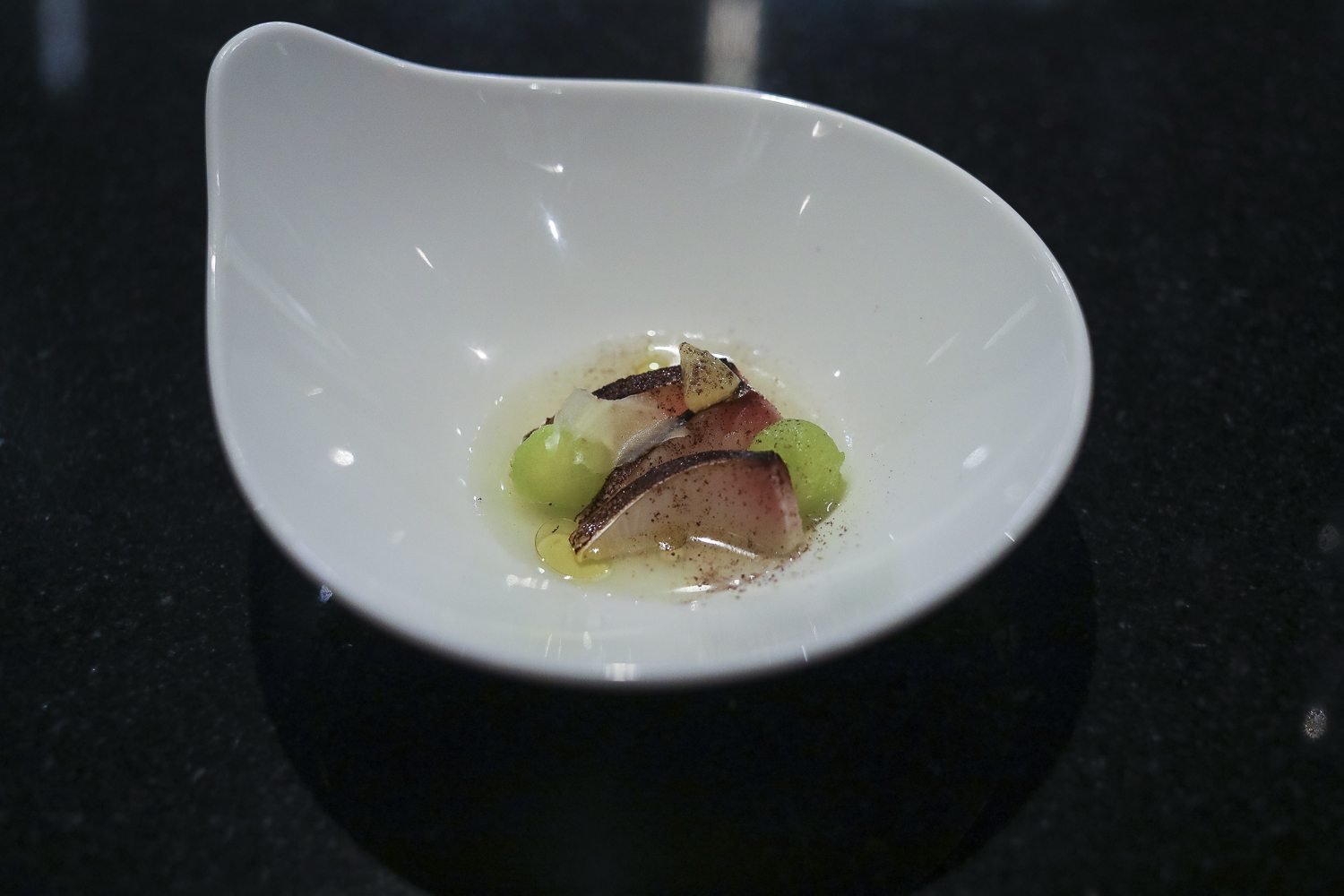 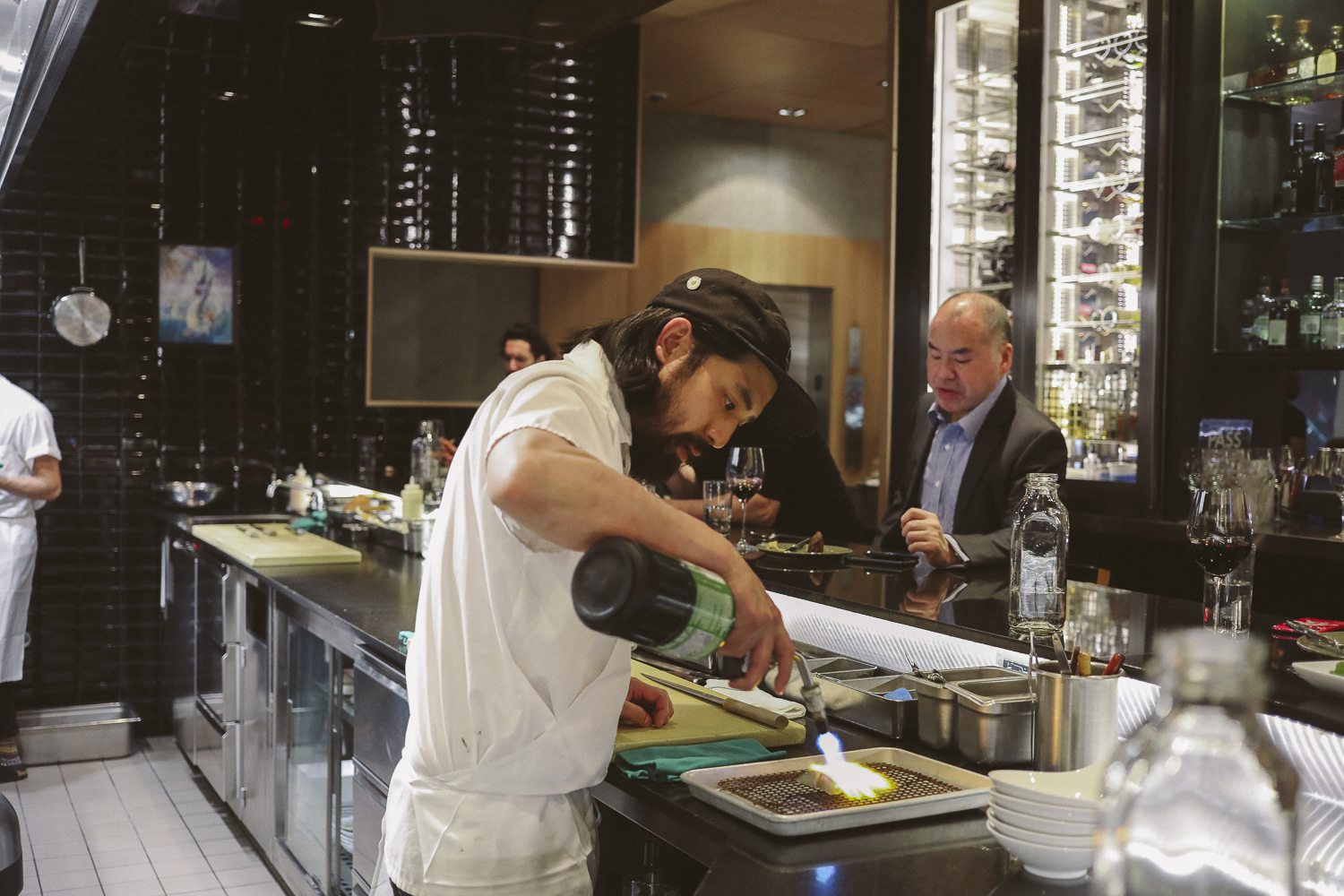 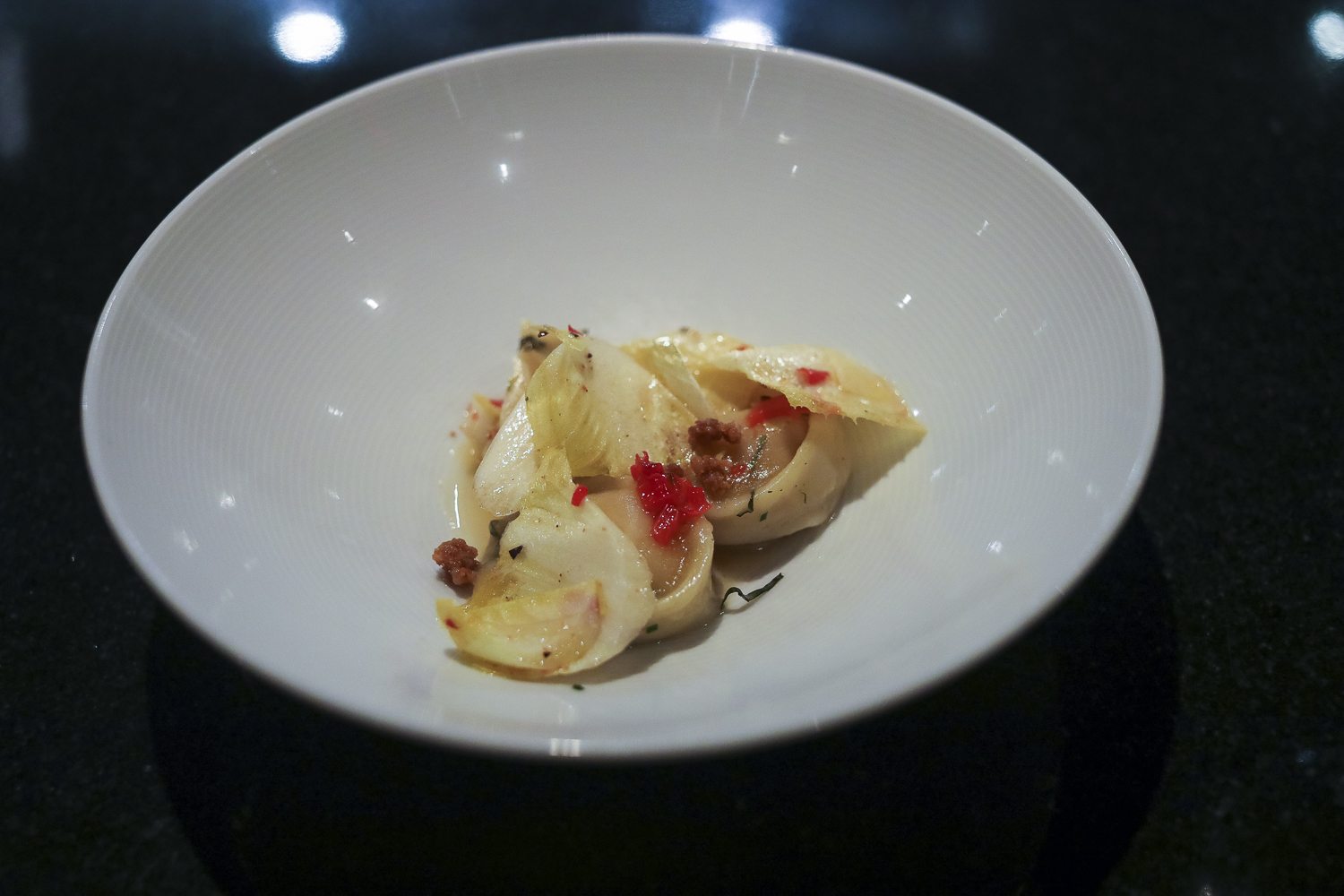 Fourth course: B.C. octopus, glazed with sunchoke tare, and served with processed sunchoke, sunchoke purée, toasted sunflower seeds and a sunchoke juice broth. “This is like sunchokes six different ways, with some octopus thrown in there,” said Smith: 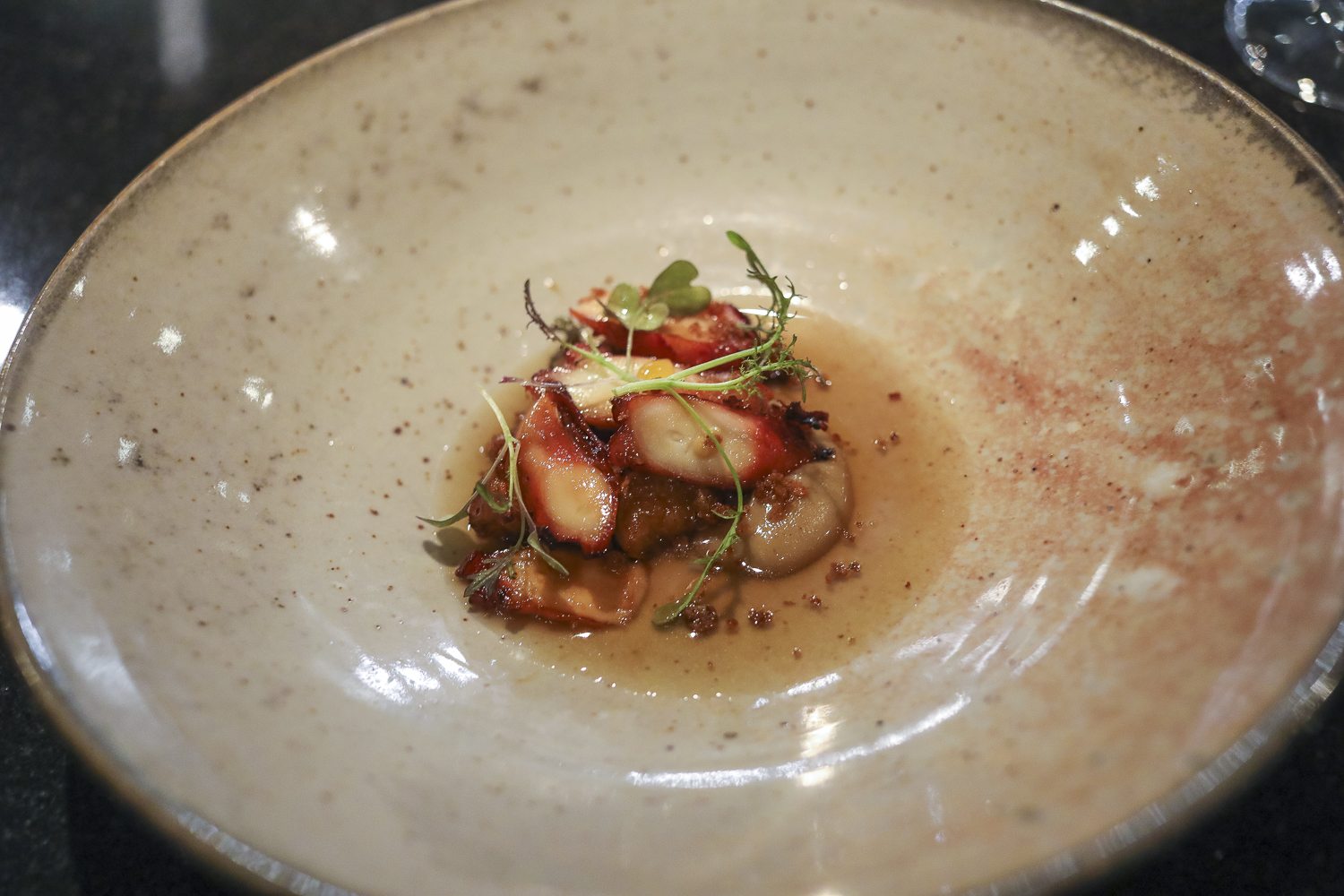 Fifth course: Dungeness crab and rice cooked in a broth of turmeric, ginger and cardamom: 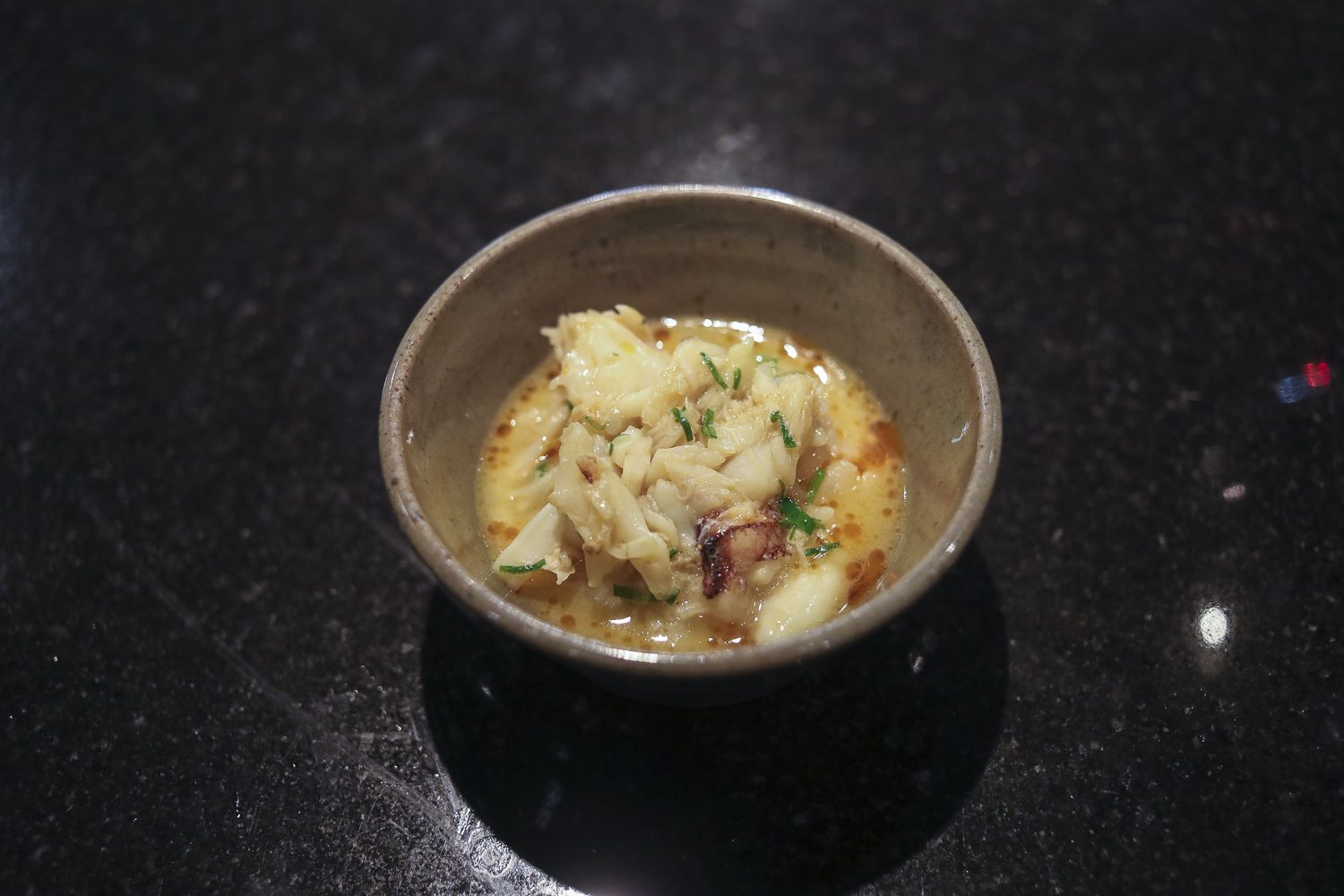 Time for a snack break! This one was a scallop-and-lobster chip, topped with snapper, lime juice, red onion, and caviar: 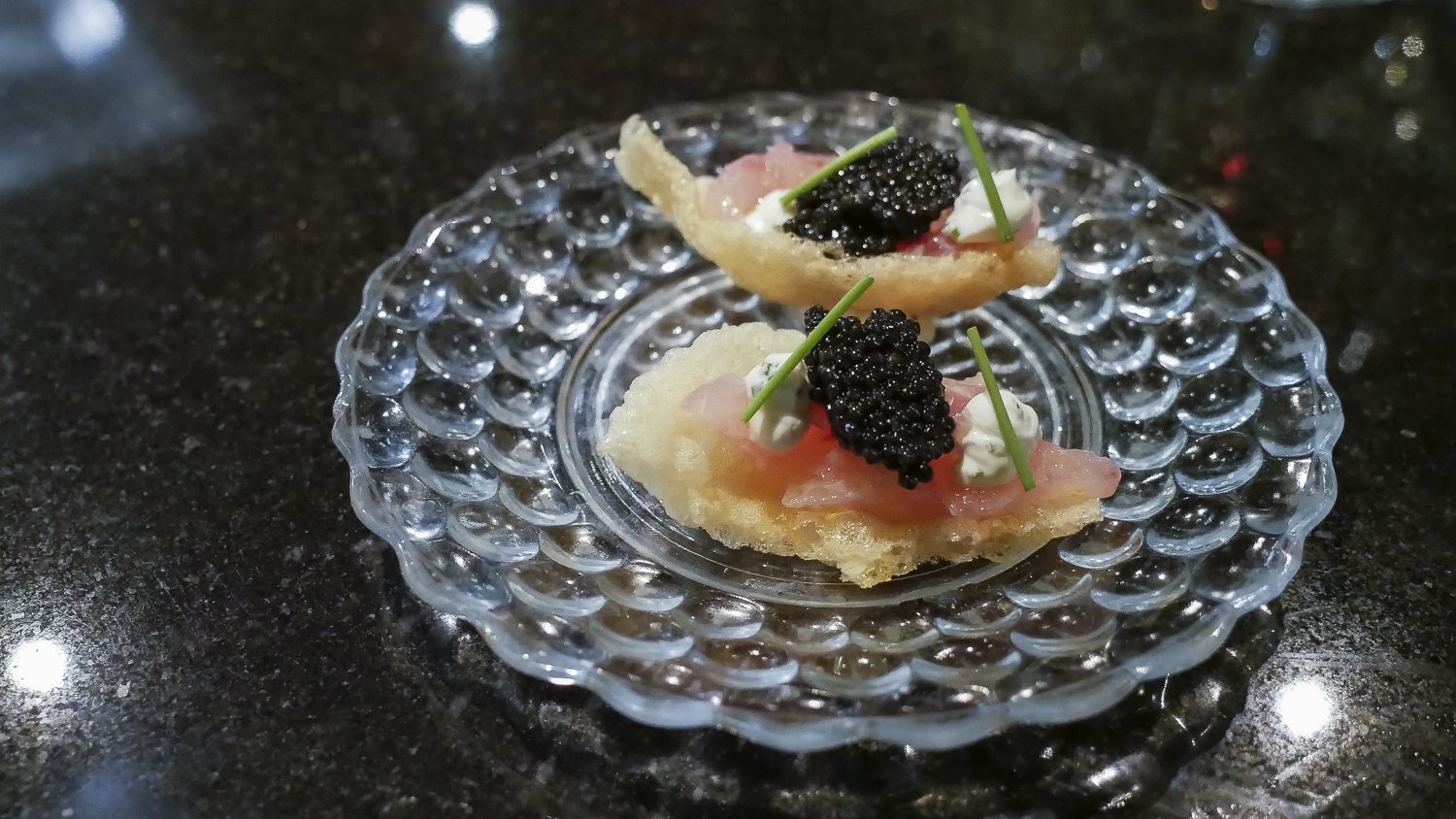 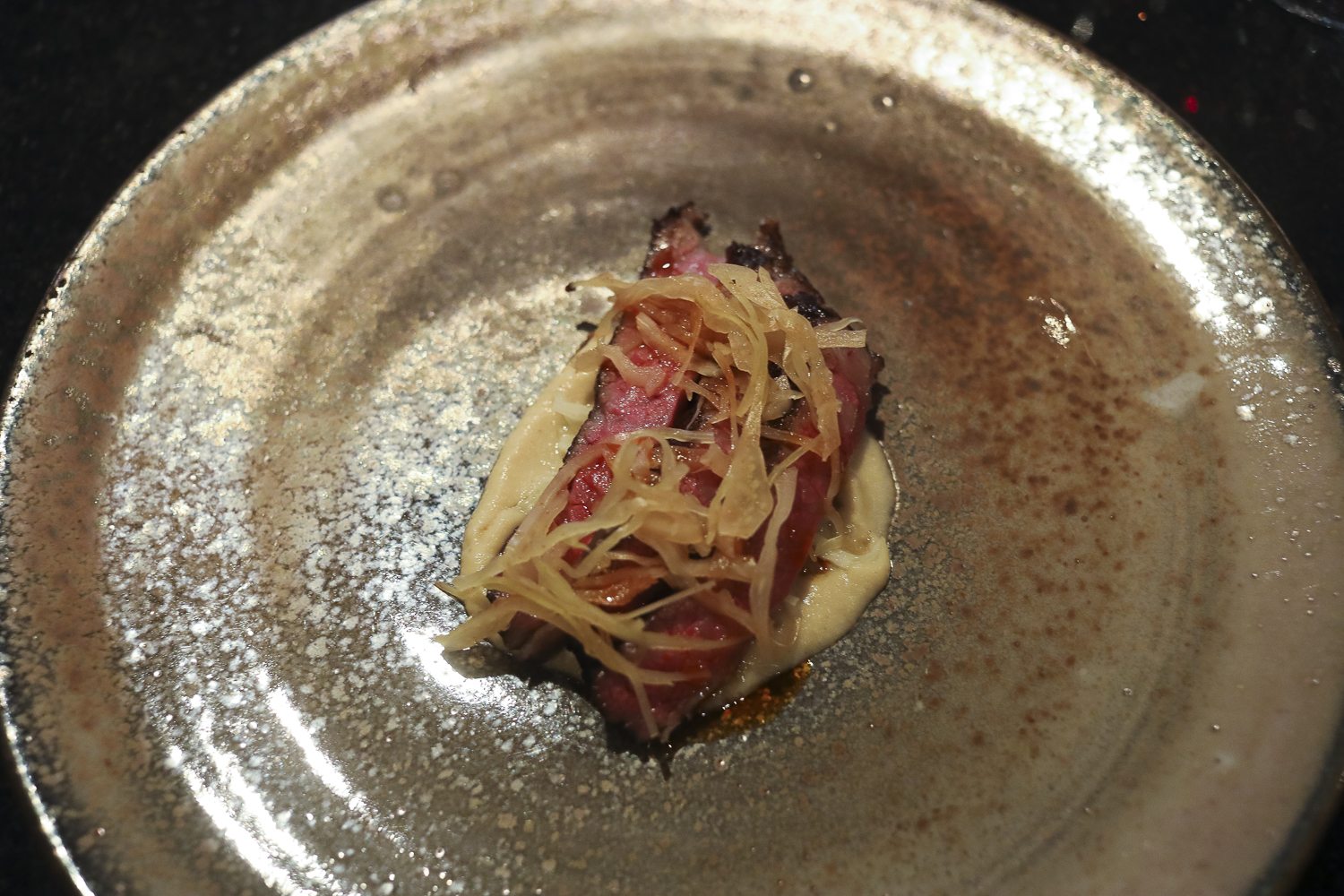 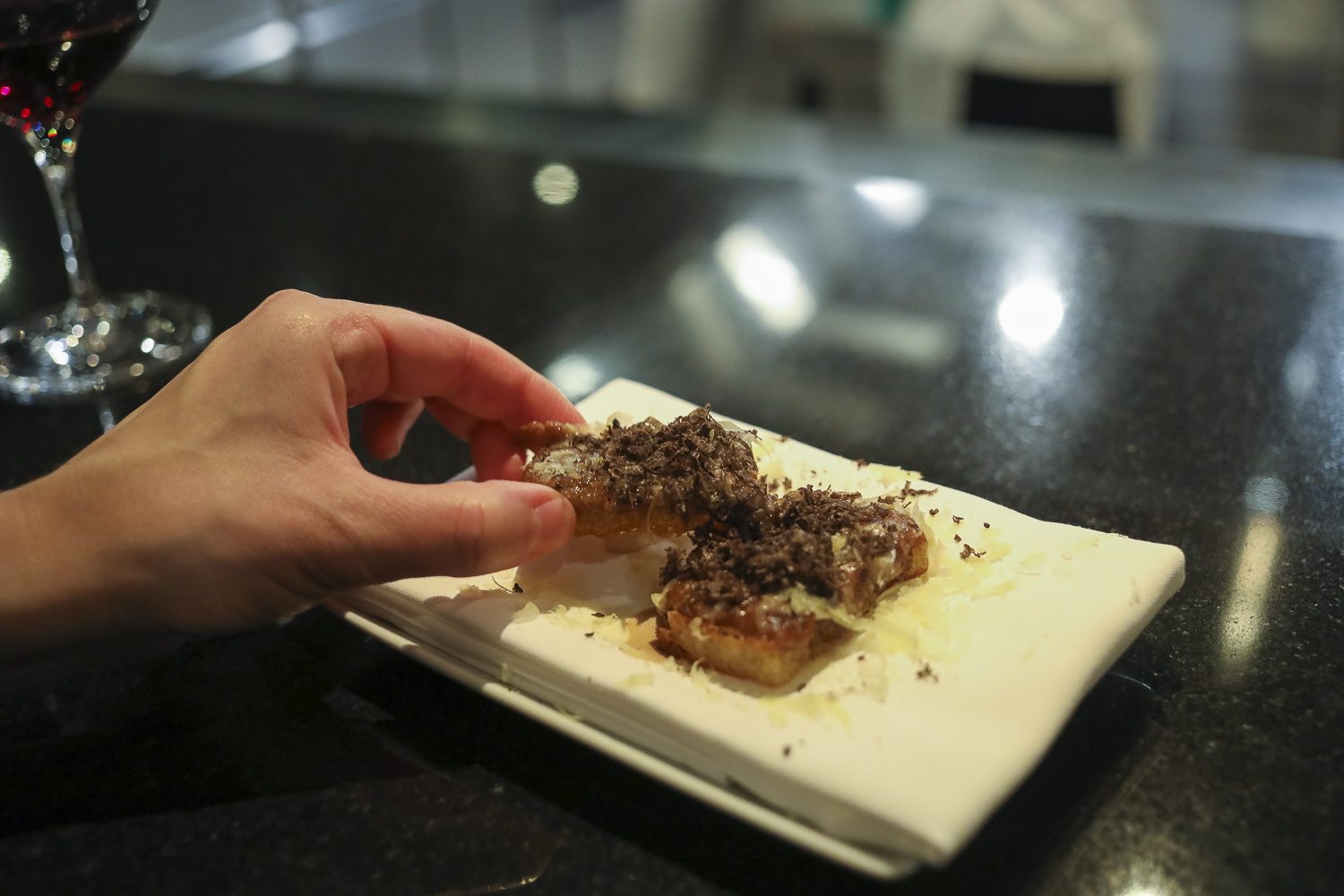 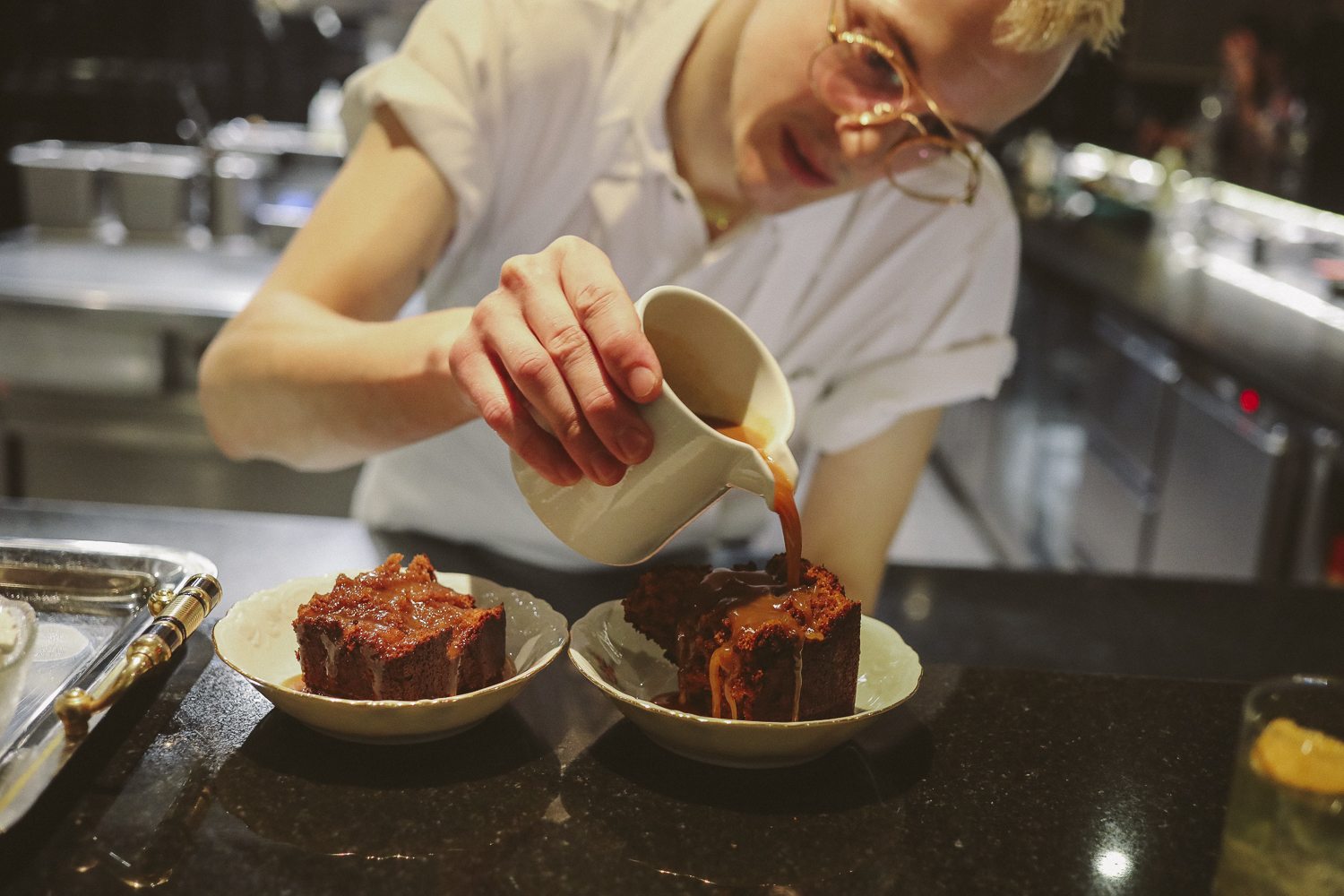 On goes the ice cream… 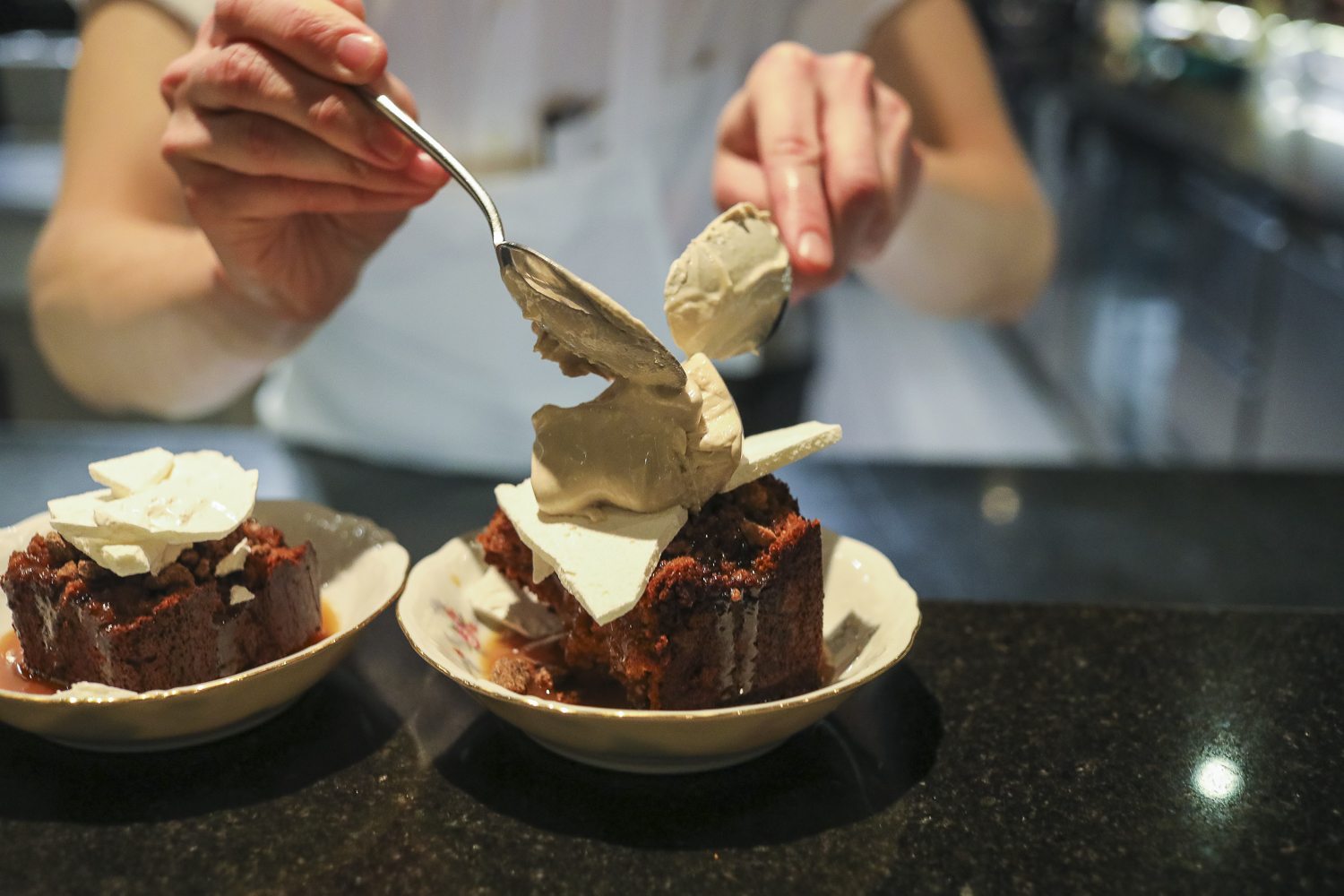 … and the shaved foie: 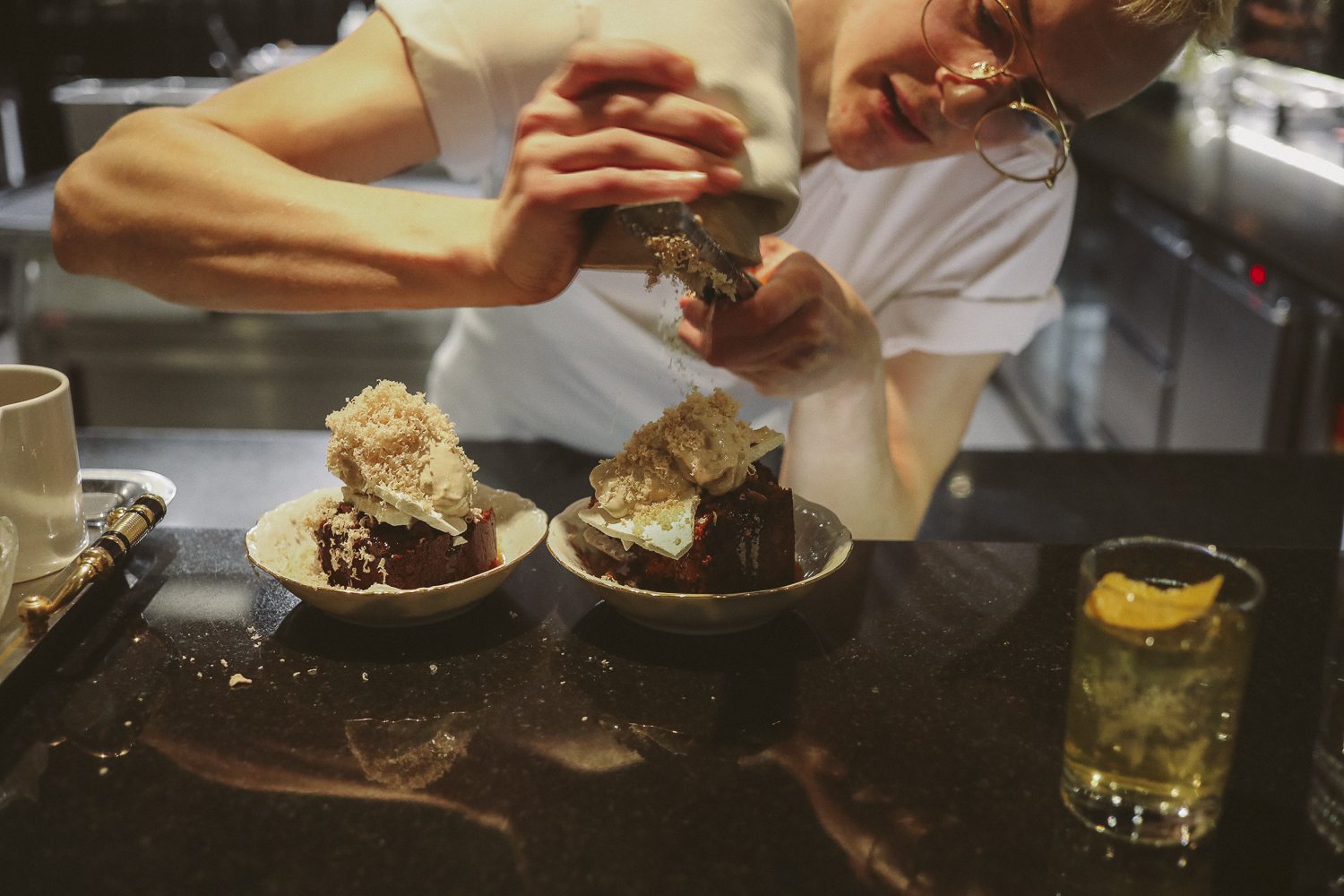 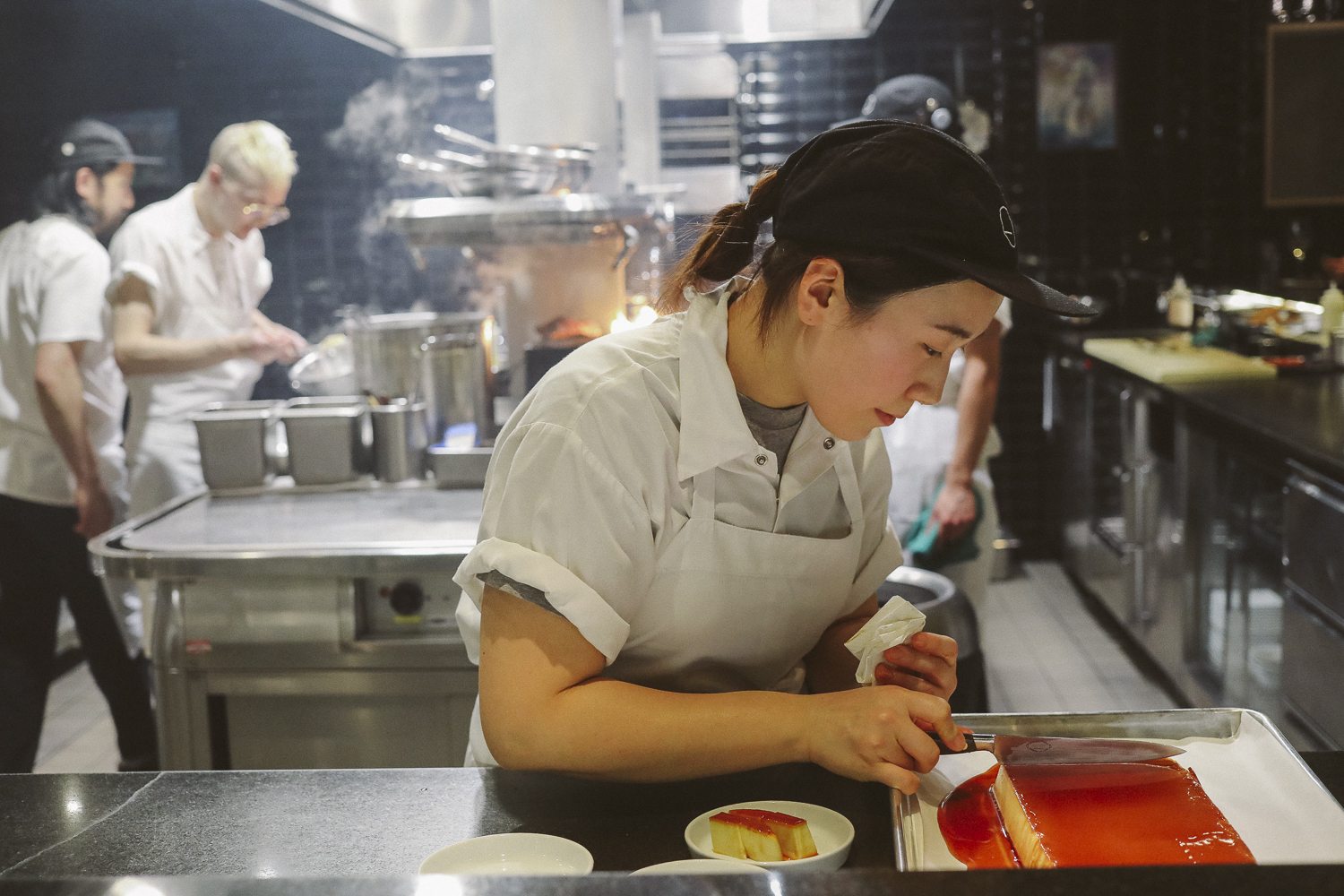 Ninth (and final) course: Peanut and maple bonbons with cubes of leche flan. “It’s my wife’s auntie’s recipe,” said Smith. “We really work on the caramel, so there’s a lot of dark caramelized nuttiness.” 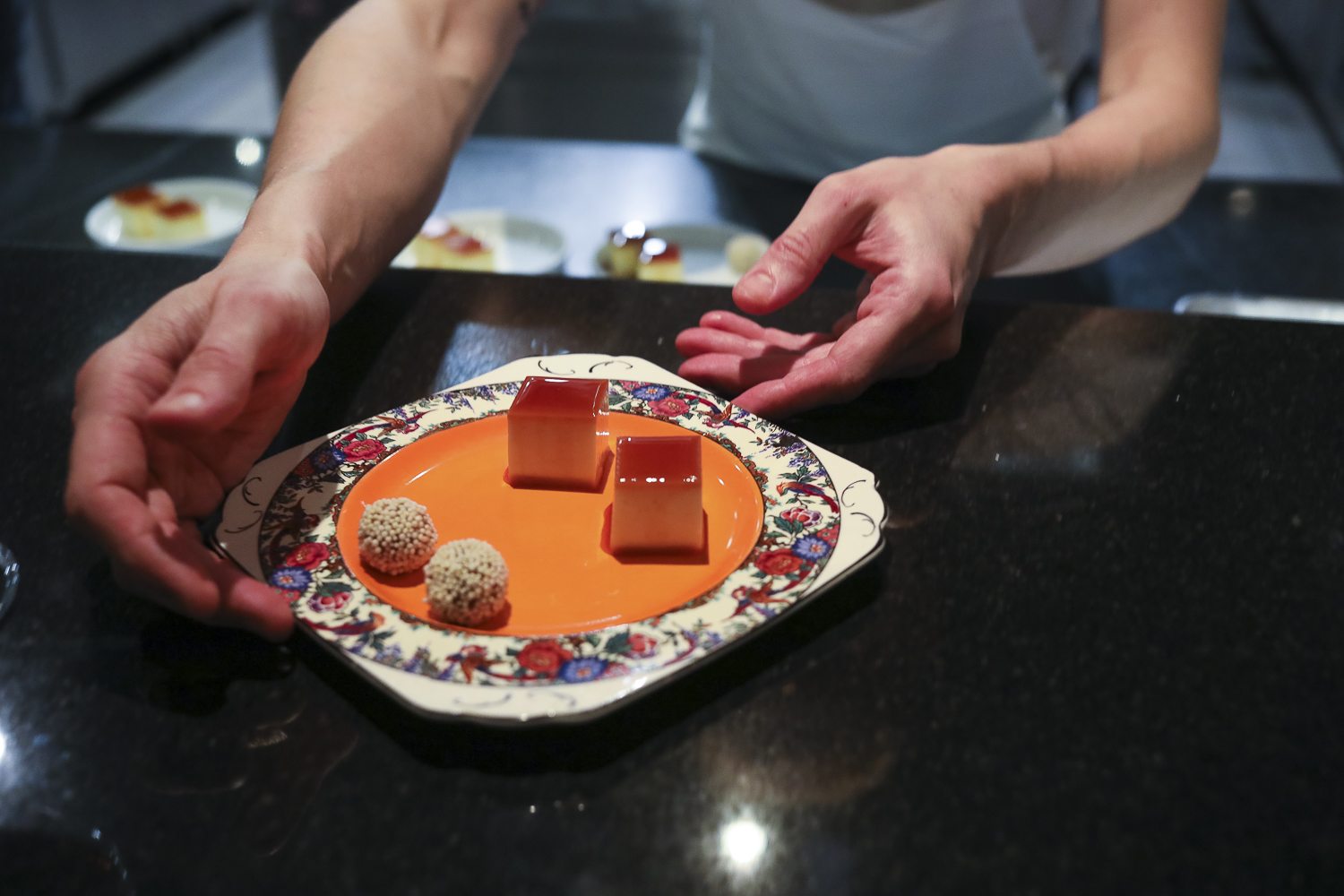 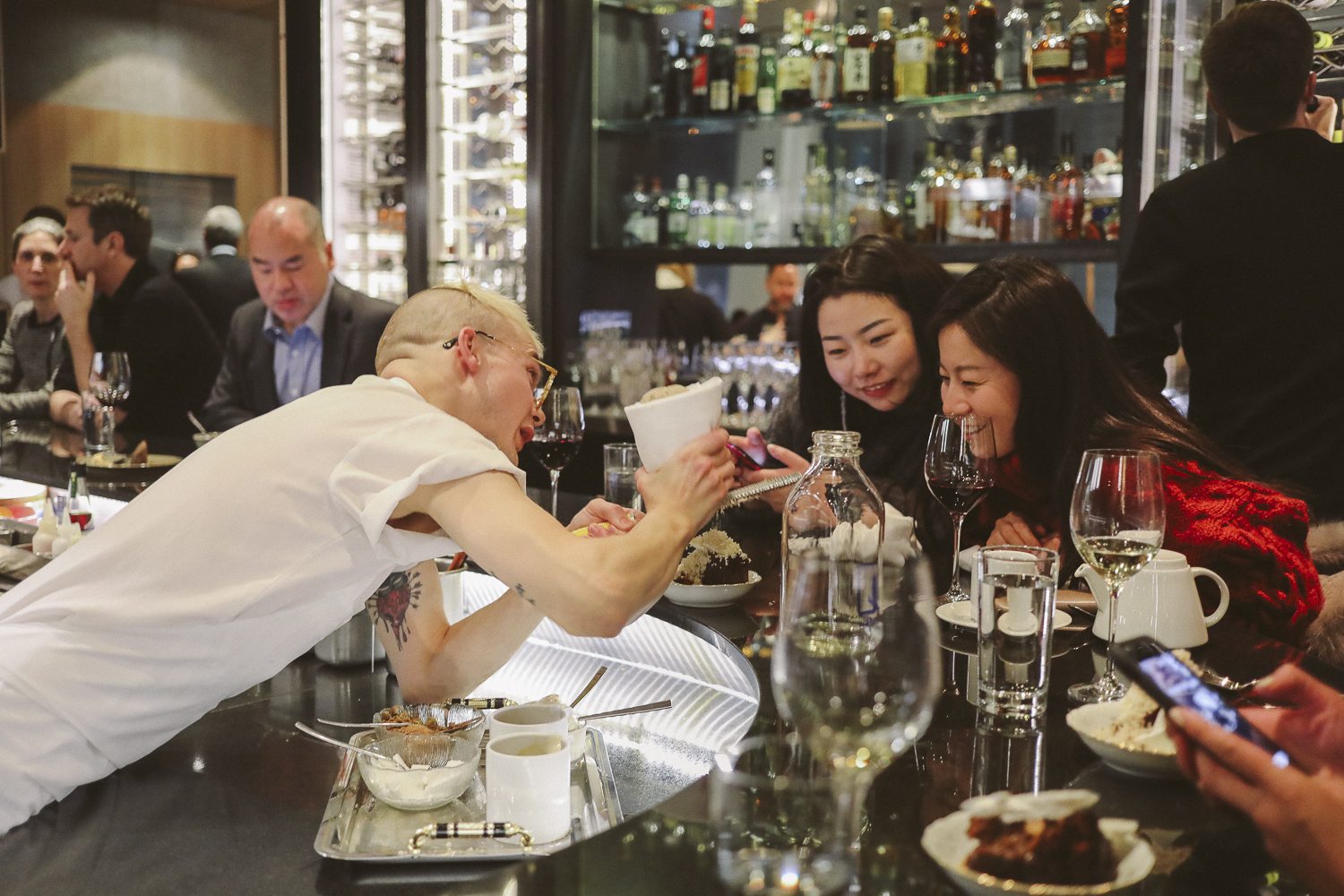 And pouring some celebratory mescal: 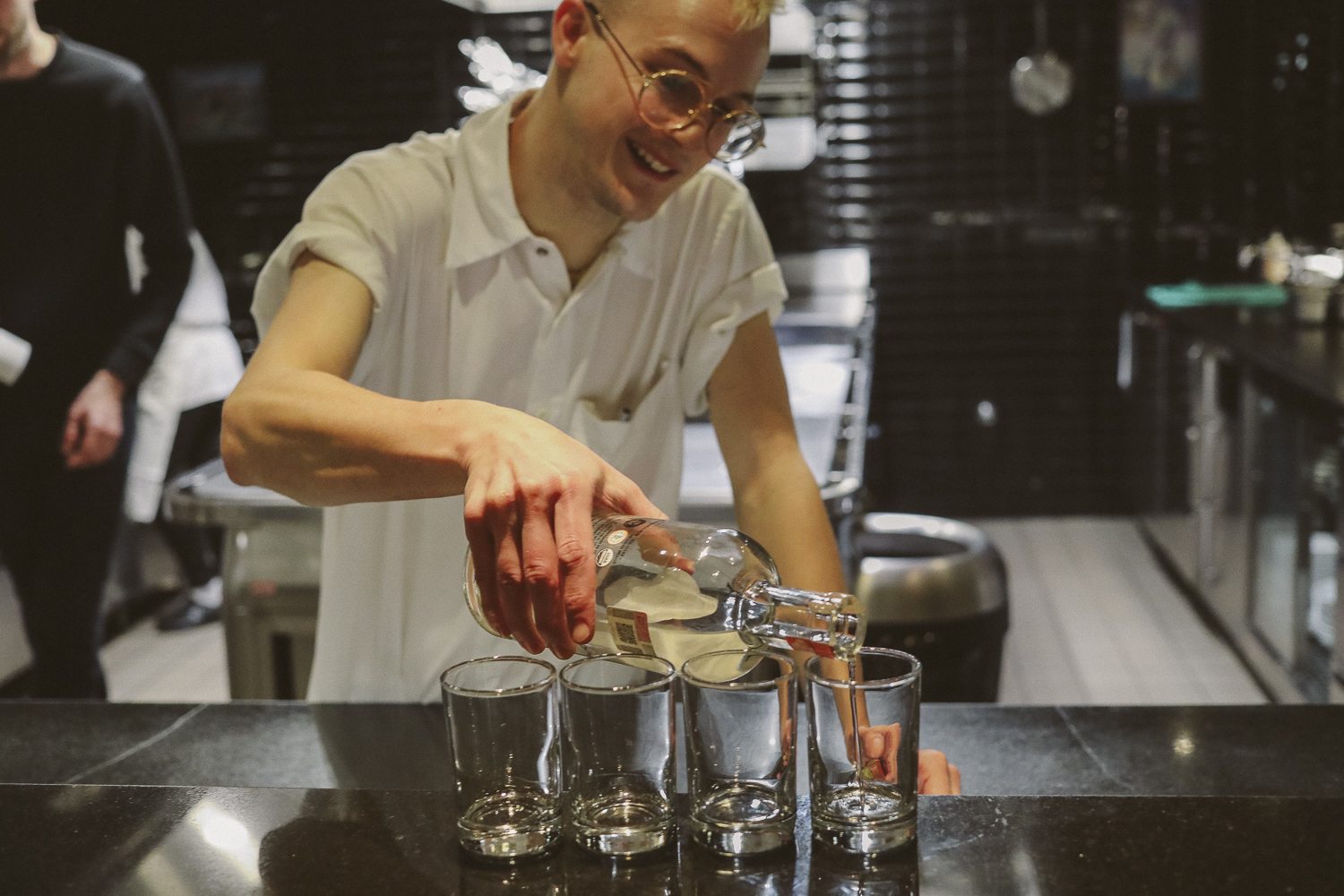