At six years old, Sanaz Maadanian had never heard of Le Cordon Bleu. She also never envisioned herself moving to Ottawa to attend the prestigious culinary school. Back then, she didn’t know the Michelin Guide from the TV Guide, but she did know that she was happiest in the kitchen.

While most of her peers were out playing games, Sanaz was at her Iranian grandmother’s side learning how to make complex Persian plates. According to Sanaz, her “fondest memories are of her trusting me to hold sharp utensils.”

Fast forward two decades, Sanaz is now making picture-perfect desserts at the Michelin-blessed restaurant Quince in San Francisco. Not only did Le Cordon Bleu Ottawa endow Sanaz with the skills to work at a three-starred establishment, but the school also prompted the young chef to have the career epiphany that would lead her down this star-studded path.

Although the Seattle native always knew she wanted to cook, she had an entirely different vision for her career when she arrived in Ottawa. In the fall of 2016, the ink was still drying on Sanaz’s undergraduate diploma from the University of Washington. She had just completed their business administration and management program with top marks (while juggling three jobs), but her eyes were always on the culinary prize: The end goal was to get her personal chef company off the ground.

She had the business acumen, now she just needed to hone her culinary abilities. When researching the best culinary schools to attend, Sanaz quickly realized Le Cordon Bleu Ottawa would be the perfect fit. Their Grand Diplôme program would mould her into a well-rounded chef with both savoury and pastry abilities (versatility is key for personal chefs).

As Le Cordon Bleu Ottawa is the only North America outpost of this 122-year-old culinary institute, Sanaz knew that if she wanted to learn from the industry’s best, she was going to have to embark on a great Canadian adventure.

From the moment the American touched down in Ottawa, she fell in love with her temporary home. Not only did the city charm her—with its river, architecture and quaint canal—the people, too, left their mark on Sanaz. “You could really tell the chefs cared,” she says about her hyper-talented Le Cordon Bleu master chef instructors.

Not only were her teachers inspiring, but Sanaz also appreciated how Le Cordon Bleu instructors taught her techniques “in an afternoon that took them years to perfect.” According to her, “They provided us with invaluable knowledge.” 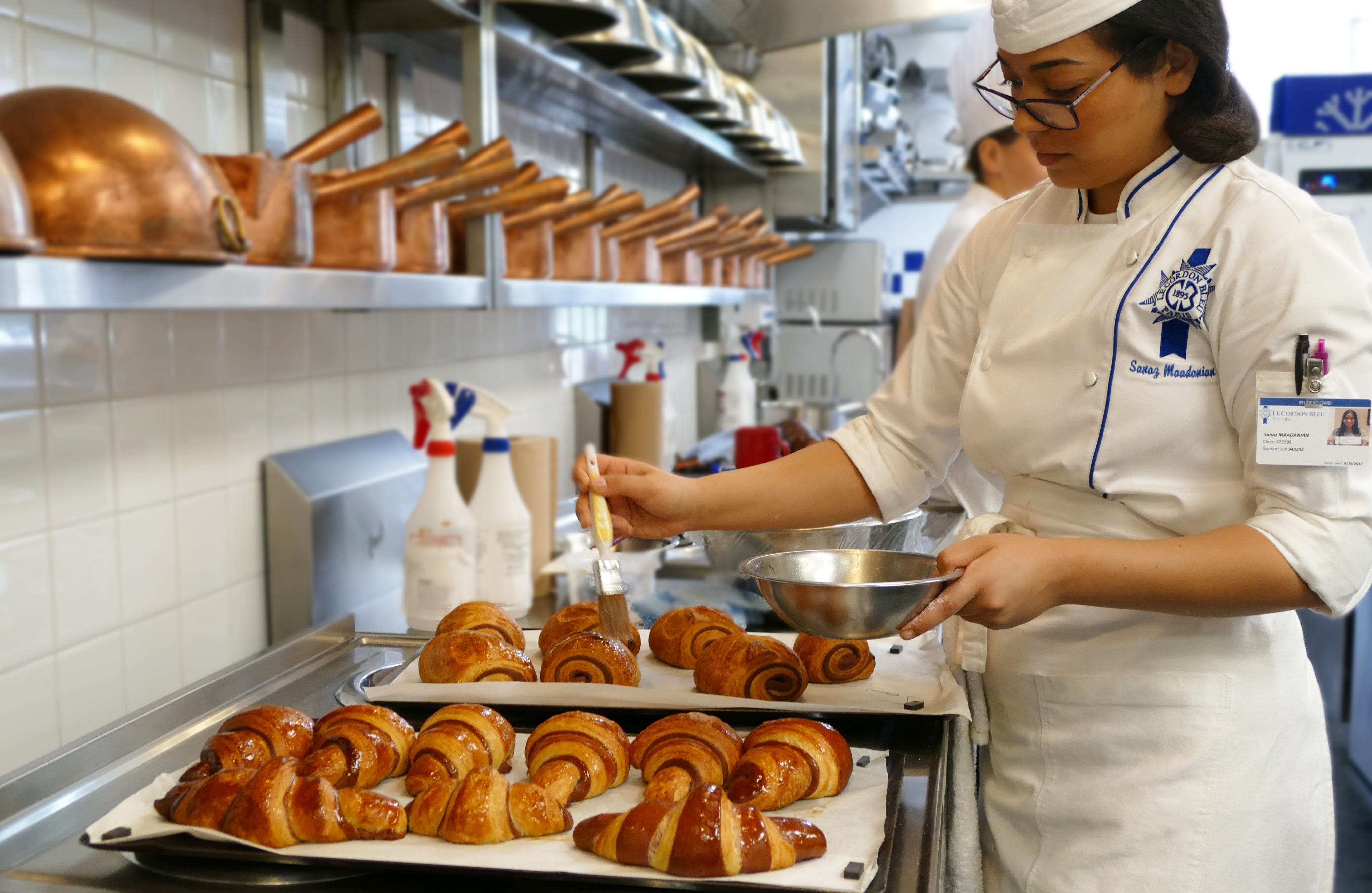 At Le Cordon Bleu, Sanaz also found a great support system in her classmates. “We made a home outside of home together,” she recalls. Le Cordon Bleu Ottawa attracts students from all corners of the globe: the international cohort potpourri of people. Some classmates were fresh from high school, others were retirees, while some were turning their lifelong passion of cooking into a second career. The one thing they all shared was a passion to strive for culinary excellence.

It was in these classes, with this group of passionate chefs, that Sanaz recognized how much she missed working in a restaurant. “I realized then how lonely it was working as a personal chef, and how much I missed the vibrant energy of the kitchen,” says Sanaz. If she was going to work at a restaurant, though, Sanaz was adamant that she would only work for a top establishment, and so she set her eyes on the three-starred Michelin prize.

Armed as a triple threat in pastry, cuisine and boulangerie, Sanaz hit the job circuit, seeking employment in only the San Francisco’s best kitchens. “I have high standards, but the places that I wanted to work have even higher standards,” she explains.

This spring, Sanaz found her perfect fit at Quince. Every day she puts into practice what she learned at Le Cordon Bleu. The work demands perfection, and Sanaz delivers with her immaculate mirror glazes and too-pretty-to-eat petit fours.

Sanaz hopes to one day be a chef-owner at her own restaurant. She’s imagined an enchanting spot that serves elevated, contemporary takes on centuries-old Persian dishes. “That’s about 10-15 years away, though,” she says. For now, the young chef is delighted to be at Quince, continuing her culinary education under pastry master Yannick Dumonceau. And who knows, with Sanaz’s predilection for perfection and passion for food, she may one day earn her own Michelin star.