More on the Barn Burner 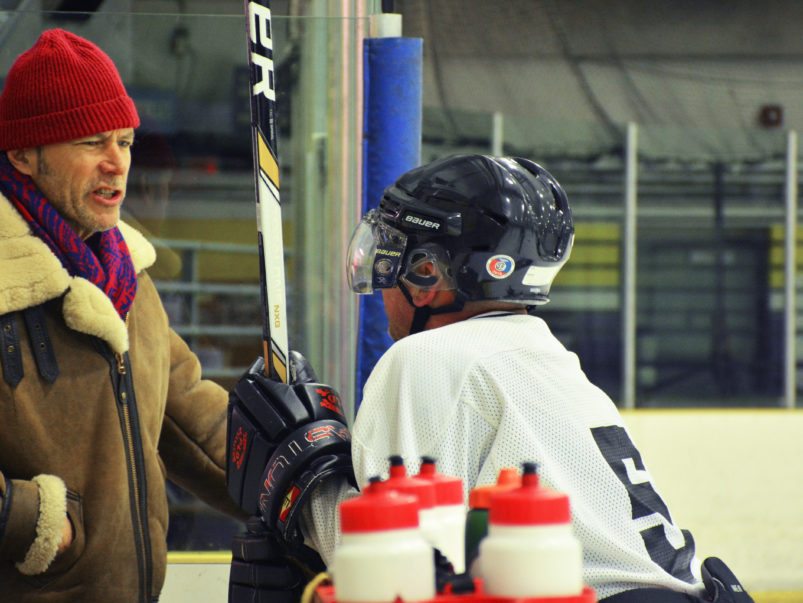 Last weekend, the Drake Devonshire used Toronto’s (friendly) rivalry against Montreal for a good cause. The PEC hotel hosted the first-ever Drake Invitational Barn Burner Hockey Classic on February 4, pitting top chefs from both cities against one another in a charity game to benefit Community Food Centres Canada. Both teams took the challenge seriously: the Montreal Mashers, whose players included Antonio Park (Park), Chuck Hughes (Garde Manger) and Derek Damman (Maison Publique) brought their A-game against the Toronto Grinders, led by Ted Corrado (The Drake) and featuring Cory Vitiello (Flock), Scott Vivian (Beast) and John Horne (Canoe). Word circulated ahead of time that several members of the Montreal team regularly play hockey together, leaving the Toronto players a bit anxious—but the Grinders won 6-2.

The festivities kicked off with an unofficial “tailgate” at Norman Hardie Vineyard and Winery—tailgate in quotations because, with wine by the glass and gourmet snacks, it was a far cry from a party in a parking lot. Joe Beef brought smoked meat for sandwiches, served with mustard and a sour pickle:

There was also smoked char from Garde Manger, served with dill and capers on dark rye from PEC bakery Humble Bread:

In addition to wines from Norm Hardie, Garde Manger’s Chuck Hughes brought a few bottles of his own (appropriately branded) cold brew:

Before the game, chefs and select VIPs—including Montreal Mashers coach and NHL Hall of Famer Ken Dryden—were treated to a whiskey tasting from Lot 40, plus cheese pairings from Cheese Boutique’s Afrim Pristine. Not too many of those about to hit the ice hit the booze, but they did get a sneak peek at the trophy that was up for grabs:

For a special—and delicious—treat, Pristine brought blocks of crystallized maple syrup, which he grated over Bleu d’Elizabeth from Quebec (that’s chef Nick Liu of Dailo looking on). Both the cheese and blocks of syrup are available at Cheese Boutique:

Non-blue cheese fans had plenty of options, too:

Once the puck dropped, ticket holders could sit tight and watch the action, or prowl the upper levels, where a number of top chefs—including the Drake’s Alexandra Feswick and Grant Van Gameren of Bar Raval and Bar Isabel—were serving up gourmet concessions alongside beer from Moosehead. Here’s Van Gameren, dishing out some tangy pickle-and-sausage soup:

After the game, the chefs headed back to the Drake Devonshire to plan the night’s $110-a-head “walking dinner”:

At 7 p.m., the guests started pouring in. Lot 40 cocktails were in good supply:

In a showing of good sportsmanship and camaraderie, Carl Heinrich of Richmond Station was assisted by Emma Cardarelli of Montreal’s Nora Grey as he dished out pumpkin soup with mascarpone from within a hollowed-out gourd:

Joe Beef served oysters out of an ice-filled canoe:

Jeremy Charles of Raymonds in Newfoundland—who played with the Toronto team earlier in the afternoon—made a rustic moose chili. He’s the one with the beard, to the left of the antlers:

Chef Anthony Walsh (O&B) and his team had a lamb roasting over an open fire in the hotel’s front lot all day long. It was eventually served inside quartered pitas:

And, of course, there was plenty of local PEC wine, as ticket holders and chefs alike ate, drank and—eventually—danced the night away: