Restaurant impresario Hanif Harji is a juggernaut. If it seems like he’s always got a new restaurant concept in the hopper, it’s because he does. His current Iconink roster includes Shook (the newest of the bunch), Patria, Mira, Byblos, Figo and Weslodge. His empire isn’t even limited to Toronto: Hanif has expanded into the U.S. (Byblos Miami) and Dubai, where there’s a Weslodge twin.

With so many irons in the fire, Hanif’s always on the go. Even his vacations are planned around chasing food. Before he opened Patria, Hanif and his wife, Rochelle, took three weeks to wind their way through Spain in the name of research. Hanif is always tweaking the menus at his restaurants, and he’s now planning to launch a pintxos brunch at Patria—which means another inspirational excursion to Spain is in the works.

Rochelle and Hanif work different schedules: she’s a nine-to-five sales executive at Bell Media, he’s a ten-to-midnight restaurateur. When she’s already leaving the house, fuelled by a green smoothie, he’s only just waking up. Hanif’s mornings start around 9 a.m. with a cup of De Mello Palheta coffee (the same Brazilian roast used at all the Iconink restaurants). He then throws some mani (an East-African flatbread) onto a pan to warm it, which he eats with lactose-free yogurt and some pungent green pepper–coriander chutney. Hanif’s mom brings over a care package of chutney and mani every week. “If we run out, it’s a crisis,” says Rochelle.

After breakfast, Hanif heads to the office for meeting after meeting. He never packs his own lunch, so he usually scarfs something healthy from one of his restaurants, typically a salad of some kind. Lately, he’s lunching a lot at Shook. If he needs fuel throughout the day, he’ll snack on corn nuts and dehydrated mangos. He doesn’t often snack, though, as he’s usually menu-testing with executive chef Ben Heaton throughout the day. If he’s peckish when he gets home, he’ll either crush a second mani or make himself a bowl of granola and yogurt.

Weekends are when Rochelle and Hanif get to spend some quality time together. An ideal Sunday for the couple involves sleeping in, then making brunch. They’ll sip coffee and read on their patio for a bit before heading out for a walk around their Summerhill neighbourhood. If it’s nice out, they’ll pop over to the Price Street Terroni for a drink on the rooftop, after which it’s time for football (Hanif is a die-hard New England Patriots fan). When the game is over, they’ll make dinner. The Harjis barely order in, preferring to cook simple healthy suppers, like a brown rice pasta in a tomato sauce, or quinoa bowls with roasted veggies. If they do go out for dinner, it’s often to one of Hanif’s restaurants. “It’s hard not to,” says Rochelle. “No matter what you’re in the mood for, he has one of everything.”

The couple moved into their duplex two-and-a-half years ago and absolutely love their open-concept kitchen: one side opens onto the living room, while the other side leads into the solarium, which in turn opens up to the back patio. “The gas range was a bit intimidating at first, but I love it now,” says Rochelle. She’s also a big fan of her double-drawer Fisher and Paykel dishwasher; you can have one load going, while filling up another, which means there are never dishes in the sink. Hanif likes how the kitchen gets lots of natural light, but he has no real opinions on the layout or appliances. “It’s a bit sad, but I cook very little,” says Hanif. “At least I know my limitations.”

Rochelle does most of the grocery shopping. She likes to buy non-GMO, organic products, and finds the selection at Whole Foods to be top-tier. She’ll pop over to Harvest Wagon for specialty items, like bread from Blackbird Baking Co, and Loblaws is their failsafe for everyday staples. For meat, they’ll either pop into the Healthy Butcher (Hanif likes their turkey burgers), or they’ll drive out to Woodward Meat Pureveyors in Oakville, should they want something a bit more interesting.

They love olive oil and have half-a-dozen different kinds on hand at any given time: 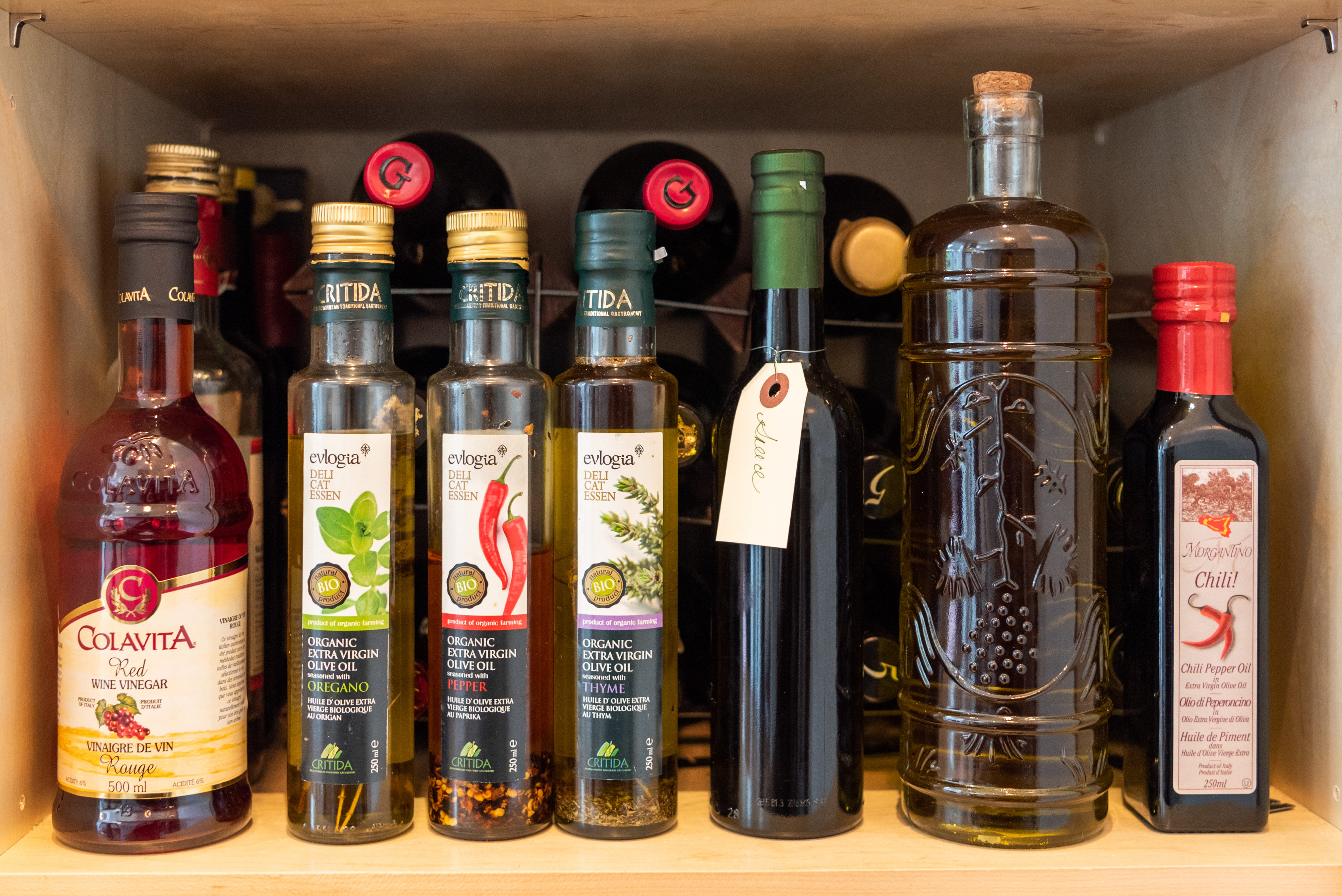 Hanif has opened and shuttered his fair share of restaurants, but he still gets nostalgic when he talks about the now-closed Kultura, which is where he met Rochelle. (She was a customer who decided to complain about a poor adjective choice on the menu.) One of his chefs from Kultura, Eugene Ong, opened Knife on Dundas West, and that’s where Hanif buys Rochelle all of her Japanese steel knives:

Their pots, cups, French press and kettle are all Le Creuset:

After Hanif’s done with a cookbook, he usually retires it to his King West office for chef Ben Heaton to peruse. When Heaton gets the books they’re usually peppered with Post-It notes—typically things that Hanif thinks would be a good fit for one of his restaurants:

When it comes to booze, Hanif likes to savour something slowly with a cigar, so he enjoys the bold flavours of vintage rums and scotches. There are more than 50 bottles in this bar, but Hanif is typically drawn back to his favourite six:

Hanif prefers old Bordeaux, white Burgundies, Spanish reds and fine Champagnes. He’s also been known to enjoy a Napa red from time to time. The Californian bottles below are from the couple’s recent trip to the wine valley: 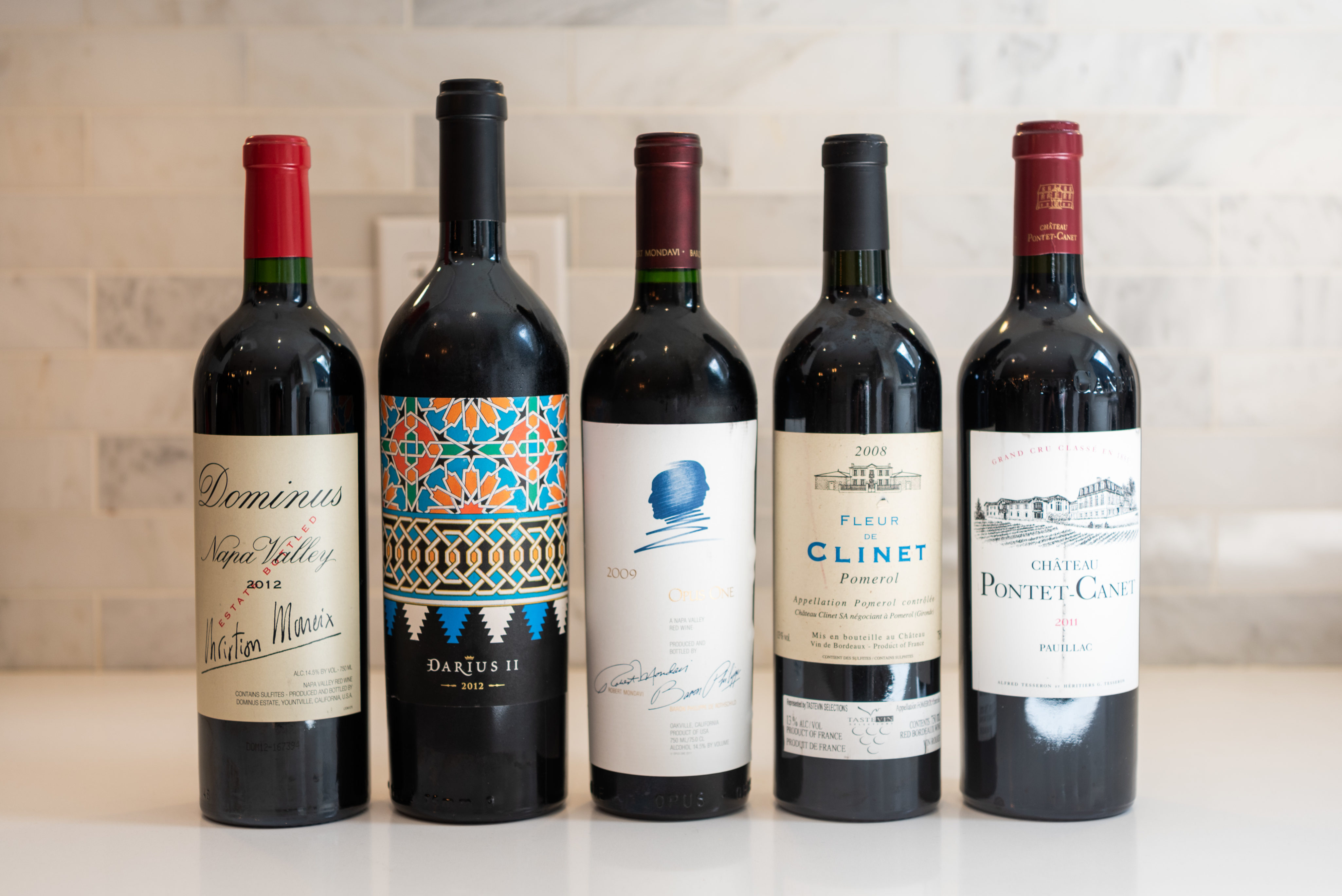